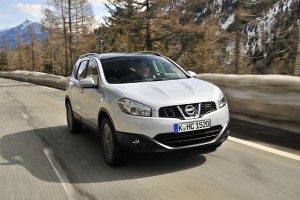 The Qashqai has been a runaway success in Ireland since it was launched in 2007. This is a car that really managed to capture the Irish public's imagination because it offered the best of both worlds. On one hand it looks like an SUV, which has all the street cred, but in reality most of the versions sold here are front-wheel drive with frugal engines and are cheap to run. The Qashqai is also really good value to buy with high levels of standard equipment.

Nissan got the receipe just right with the Qashqai because it has all the chunky good looks of a larger Nissan SUV but none of the guilt and the addition of a +2, seven-seat model meant that there is a version to suit the larger family too. Penned under the watchful eye of Nissan Europe's Design Director Stephane Schwarz, the Qashqai is due a facelift in 2010, which is set to give it a mid-life refresh. The dimensions of the car are about the same as a regular five-door family hatchback's so it isn't overly bulky for city driving either. The Qashqai +2 features two extra seats without adding too much to the length of the vehicle.

Part of the success of the Qashqai in Ireland has been the value for money and Nissan has kept the price very competitive and the specification levels simple and equipment rich.

Most buyers choose the 1.5-litre diesel engine, which has 106bhp and 240Nm of torque and because it has emissions of 139g/km it resides in Motor Tax Band B, which means low annual running costs too. There is also a 1.6-litre 115bhp petrol model available, which doesn't sell in large numbers but is still reasonably frugal. At the top end, there is a 2.0-litre diesel engine, which can be twinned with four-wheel drive. This 150bhp diesel isn't all that clean, with emissions of 184g/km. Hence it is a slow seller and there is little or no demand for four-wheel drive in the Qashqai.

Anyone expecting the Qashqai to be as good to drive as a standard family hatchback might be disappointed, but its really isn't that far off the best of the standard cars in terms of ride comfort and agility. The thing that Qashqai owners and potential buyers like is the high driving position and this is a major plus point for the car, especially if you drive in the city. It's also a boon if you have kids, because getting children in and out of the rear is much easier when the access points are high. Older drivers with back and hip problems will also appreciate the Qashqai for similar reasons.

The Qashqai has good steering feel and for a car of its height it doesn't exhibit too much body roll either. The 1.6-litre petrol engine feels slightly more peppy even though there isn't much between it and the 1.5-litre diesel on paper, but the latter just makes way more sense - and with more torque, it just feels more suited to the style of vehicle. The benchmark 0-100km/h sprint takes 12.2 seconds in the Qashqai 1.5-litre diesel and fuel economy at 5.4 l/100km isn't bad either.

The Qashqai gained one of the highest ever scores in the Euro NCAP safety tests when it was launched and this too has been a reason why so many families have chosen it.

It really isn't that difficult to see why the Qashqai has been such a strong seller since it was launched because it ticks lots of boxes for Irish buyers. The 1.5-litre diesel engine is really the only one to go for and with the +2 version you get the option of something with the versatility of an SUV too.