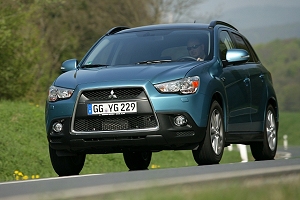 New crossover contender from Mitsubishi to take on the Nissan Qashqai.

A crossover aims to offer SUV practicality, often without the rugged ability or complexity, with the price, economy and emissions of a family hatchback. It seems that is just what buyers want, which is why Nissan's Qashqai has been such a big success. Other manufacturers are still catching up now, with Mitsubishi among the first to offer a model aimed directly at the successful Nissan. It's called the ASX - or Active Sports X-over - and it'll be fighting for buyers in Ireland from September 2010.

With its now familiar gaping Mitsubishi grille and plentiful slashes and creases on its bodywork the ASX is certainly a good looker. Based on the Outlander (and hence Lancer) platform it retains the Outlander's wheelbase, which means it's spacious inside. It does make for a rather truncated look to the rear styling, which suggests a small boot - but that isn't the case. Looking like a cross between a Lancer and a Colt, with a bit of Outlander mixed in, it'll certainly turn heads in comparison to conventional family hatchbacks its pricing pitches it against.

The interior feels solidly built, though the neater, high quality plastics that Mitsubishi has only recently discovered only cover the areas you see and touch the most. There's lots of space, so it's easy to get four adults in comfortably, a fifth squeezing in too if you don't mind rubbing shoulders. Leg- and headroom is impressive, while the boot is usefully shaped too - and has a handy under-floor compartment.

Underneath its edgy body the ASX may share some DNA with the Lancer Evolution, but the sporting genealogy doesn't make itself evident on the road. The ASX is aimed at a completely different audience though, so its soft ride is forgivable. It rolls in the corners, but the trade off is a compliant ride around town, with rough roads soaked up with ease. The steering feels a bit strange, with some heft off-centre and not much in the way of feel, but at least the wheel can be adjusted for both reach and rake - something missing on most past Mitsubishis.
The petrol version is likely to make up the majority of sales thanks to its band B emissions and taxation, but the diesel is the only engine we had on hand to test. It's usefully punchy and smooth, but the way it delivers its power lacks the linear feel of many rivals - with a big chunk of torque arriving forcefully at 2,000rpm. Once it's up there and above it's fine, but you need to drive around some initial tardiness from the 1.8-litre unit before it really shifts the ASX. Economy is excellent though, with the front-wheel drive turbodiesel returning 5.7 litres/100km on the combined cycle and emitting just 145g/km of CO2.

There are two engines to choose from: a 1.6-litre petrol unit with 117hp and a 150hp 1.8-litre turbodiesel. The latter is the first of its kind to feature variable valve timing, which not only benefits economy, but helps with refinement too. The ASX is only offered with a manual transmission at launch - five-speed on the petrol models and six-speed on the diesels - and front-wheel drive.

Mitsubishi's new ASX gives buyers in the relatively limited crossover class another showroom to visit. While it does everything you'd expect it to do it doesn't particularly excel in any one area. That's not really a complaint, as it's got the basics right - being practical, well priced and economical. Which is exactly what buyers are after.