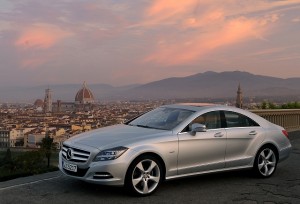 The second-generation Mercedes-Benz CLS is as great to drive as it is stunning to look at.

Mercedes-Benz's original CLS is a tough act to follow, but the replacement builds on its most desirable attributes. Head-turning looks, fine driving dynamics, supreme refinement and a range of powerful yet economical engines make the CLS a hugely desirable luxury car choice.

The new CLS trades some of the previous car's svelte style for more architectural lines. It's arguably less elegant, but it's undeniably attractive, the bolder look suiting the CLS well. The upright grille is larger and more assertive - and very similar to the SLS AMG supercar's. The flanks are busier, with a nod to its E-Class saloon relative at the back thanks to its pronounced rear wings. The tapered rear lights accentuate its length, while the slim front lamps are now all LED - optionally.

Inside it's beautifully finished, though it's perhaps lost the unique feel of its predecessor, as the single large piece of wood has gone. The cockpit feel remains but it's all very similar to other Mercedes models inside. That does mean impeccable build and fine materials, but it's not as distinct as it once was.

Prices have yet to be announced, but on recent form they'll be similar or even lower than the existing car's thanks to reduced emissions across the board. Equipment levels will be up, but, again, they're yet to be confirmed. Safety equipment features extensively, with E- and S-Class items carried over - like driver drowsiness monitoring Attention Assist. Nine airbags come as standard, with pelvis airbags debuting on the CLS. The engine line-up offers fuel consumption savings of up to 25 percent over the old car, while there's more space in the cabin.

Those who have enjoyed the outgoing car will love the new one. We tested the impressive CLS 350 CDI and the 3.0-litre V6 turbodiesel provides effortless, rapid propulsion thanks to its 265hp and thumping 620Nm of torque. It will reach 100km/h in 6.2 seconds, but it's in the mid-range where it offers its most dramatic punch. Exceptional refinement only enhances the performance, the rapidly changing pace coming without an aural penalty. An official combined consumption figure of 6.0 litres/100km should keep fill-ups pleasingly infrequent, too.

It's near impossible to detect gear changes in the seven-speed automatic gearbox, which just adds to the unflustered means by which the CLS covers miles. It's not just a cruiser though, as the suspension mixes cosseting comfort with real control. The 'Airmatic' system offers a Sport setting, but it only upsets the fine balance offered by the default Comfort mode, which retains excellent control while smoothing out rough surfaces. The steering is nicely weighted and quick, though it's not loaded with detail. A touch more information at the rim would turn the CLS into a more involving driver's car.

Even so the CLS seems to find a perfect balance of remarkable control mixed with real comfort. Add that smooth-shifting gearbox and the supreme refinement (not just in terms of the engine, but also the lack of road and wind noise) and the CLS proves to be a crushingly accomplished all-rounder.

Three other engines will be offered in the CLS. These include for the first time a four-cylinder turbodiesel badged CLS 250 CDI. It'll be the economy champion and probably the best-seller in Ireland, with a combined consumption figure of about 5.1 litres/100km and CO2 emissions of less than 140g/km putting it into Band B for tax. A V6 petrol model, badged 350 CGI, and a V8-engined CLS 500 are also offered, though they won't be a common sight here. An AMG model will follow, it anticipated to be fitted with the 5.5-litre twin-turbo V8 that features in the new S 63 AMG.

It's difficult to find fault with the new Mercedes-Benz CLS. The interior might lack the unique feel of its predecessor and the more assertive styling may put off some, but the ease of driving, poise, economy and impeccable refinement make it a hugely desirable car.