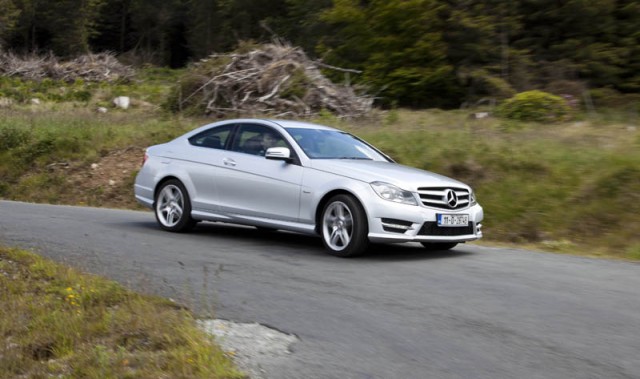 The new C-Class Coupé is nothing short of brilliant. BMW and Audi should be worried.

Our test car looked awesome. Shod with stunning AMG alloys and with an optional LED light pack it would certainly appeal to a younger audience. Parked alongside the current BMW 3 Series Coupé it looks way more modern and upmarket.

The interior is really impressive too. Critics really bashed Mercedes-Benz when it gave us such a crappy interior in the C-Class, but it has really worked hard to up its game in this regard and the result is impressive. It features great seats and a super driving position.

Our test car featured the entry-point engine to the diesel range, the C 220 CDI, which is the second-cheapest model within the line-up. This is a 2.1-litre four-cylinder unit that puts out 167hp. The torque figure of 400Nm is impressive too. Despite this being the ‘entry’ diesel it feels anything but slow. Sure enough, it doesn’t have the grunt that say, a six-cylinder unit might have, but it only really gives away a second and a half to the C 250 CDI in the 0-100km/h sprint and a mere 8km/h in top speed.

This is perhaps the best handling ‘mainstream’ Mercedes-Benz we have tried in some time. Aside from the AMG models, we haven’t driven a car with a three-pointed star that is as well set-up as this. The C-Class Coupé doesn’t ever feel overly firm, despite those large AMG wheels. We took the car on quite a few long drives on some challenging roads and it impressively managed all manner of bumps and potholes, yet the steering felt brilliant - really linear.

It is easy to set up and you get into a rhythm quickly. The automatic gearbox in our car came with paddle shifters and these are actually quite responsive. Away from the twisty stuff and around town the car is great and the standard stop-start works well without ever being irritating.

The C-Class Coupé range starts at €36,000 for the C 180 petrol model with a manual gearbox and by the time you got to our car, you would need €42,840 with an automatic transmission. We can’t comment on the manual gearbox because we haven’t tried it, but experience tells us that the automatic gearbox is the way to go and there isn’t any real tax penalty for going for this, which is good.

Our test car featured a few optional extras, which brought the price up to €52,209 - these included an LED light pack, an upgraded stereo, a media interface, those gorgeous AMG alloys and metallic paint. What is really impressive is the low CO2 emissions and the fact that the fuel economy is really very good. We reckon the combined fuel figure of 4.9 litres/100km is quite achievable. You also only pay €156 in road tax per year, even with the automatic transmission fitted.

Quite simply this is one of the best cars we have driven this year. It is remarkably good and almost certainly the best coupé in its class right now.

Retail price: Official price of test car without options is €46,115