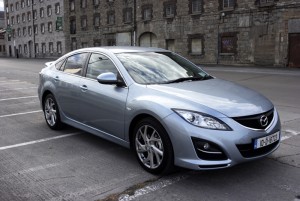 We had been meant to travel to Barcelona, where the International test drive of this new facelifted model was taking place, but once again the ash cloud put a halt to that, but luckily Mazda Ireland had a couple lying around here in Ireland so all was not lost.

Mazda's 6 is a car that deserves more attention that its gets. For one, it is a very handsome car. The quality is first class and now there are the right engines too. So why doesn't this car always immediately spring to mind when we think of the best of the large family cars? I am really not sure. Price could perhaps have been an issue before, as it sits just above the likes of the big-selling Toyota Avensis in terms of price positioning.

But every time we get into a Mazda6 we are reminded of just how competent they really are and this new one has been for some minor tweaks to make it more refined. The new, facelifted Mazda6 has what Mazda call a "sportier family face" and that means changes to the front and rear headlamps, there are new fog lamp bezels with a more flowing design and there is a choice of two new colours. The car has been made more aerodynamic too, thanks to a new front bumper.

Our model, this week, is the 2.2 Diesel Hatchback Sport (€29,485) and that gets 18" alloy wheels, Hill Hold Assist, Lane Change Assist, front and rear parking sensors, rain sensing wipers, folding heated mirrors and a sports appearance pack over the already impressive equipment on the Executive SE version, which itself has things like dual zone climate control and cruise control. The cabin has improved. The idea has been to make the car feel more premium, so there is more chrome on show and piano black panelling also gives the car a more prestige look and feel. It is a nice place to be with an interior that is more like a premium executive car than a family hatchback. There has been great sound proofing too, so the cabin is quieter and the new diesel engine is quieter too, with less clatter at start-up. Our first drive of this car is a short motorway blast to Dundrum and back to Drogheda and it proves itself to be comfortable and pretty urgent on the motorway too. The seats are pretty good and while our car still feels a little on the tight side, this will surely get better with miles.

After a day off driving altogether, it is time to take the Mazda6 for a proper drive around some local back roads and this is where the car will show its main differences. The real change is under the bonnet, where the 2.2-litre diesel engine has a 3 percent power increase, bringing it up to 129hp, with torque up 10% to 340Nm. You can expect 5.2 l/100km on the combined cycle and emissions perhaps most crucially are down to 138g/km, dropping the car into Tax Band B with annual road tax of €156.

Mazda say that they have altered the suspension to improve handling stability and steering response. It does feel like a pretty agile car, but I would have liked a little bit more steering feel, but this is a minor complaint. Mazda say that they have upgraded the steering to make it more refined during straight ahead driving and this perhaps explains the slightly dead feeling at times.

However, there is little body roll in evidence and the car feels very composed over some poor surfaces and this is even with those big 18" alloys that come as standard on the Sport model. This is definitely a car I could live with. It is spacious, comfortable, but well able to turn on the mischief if you want it to. I do like the spec on this Sport model too.

This car is impressively loaded with safety equipment. It gets the full compliment of things like Dynamic Stability Control, Traction Control, ABS, EBD, Emergency Stop Signals and of course front, side and curtain airbags.

Prices start at €26,485 for what is an overwhelmingly diesel range. You can have the 129hp version we have been driving or you can have the 180hp 2.2 diesel as the Z-Sport. For those few that still want petrol, there are 1.8-litre (120hp) and 2.0-litre (155hp) options available too. There is a choice of saloon, hatchback (which we were driving) and estate body styles.

With this costing more than an equivalent Avensis and less than a Passat or Insignia of similar spec, this is a nice balance between the two and would make a great family car or low-cost alternative to an executive car, without ever feeling low rent.