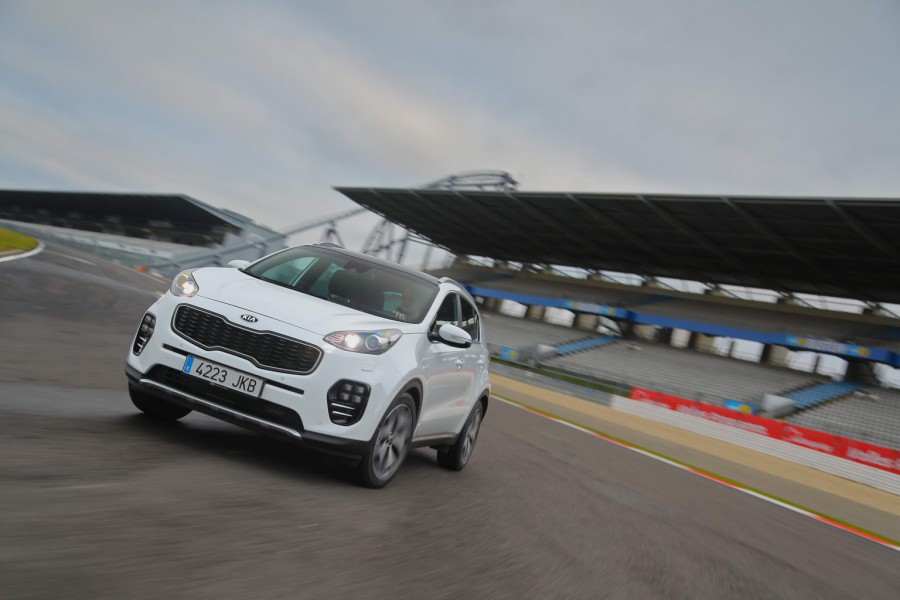 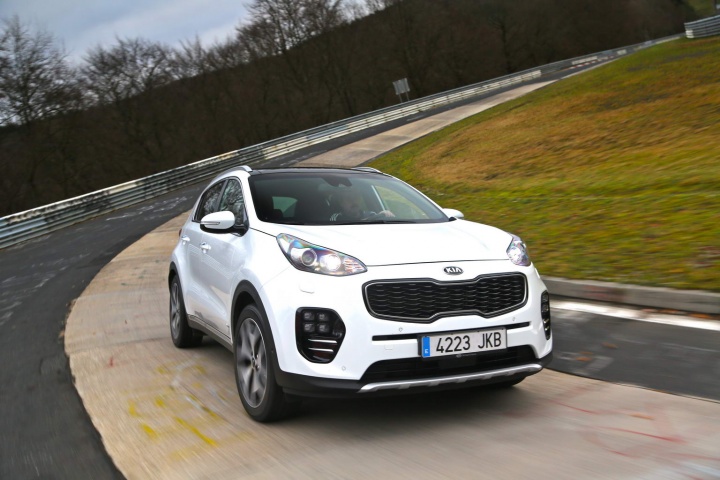 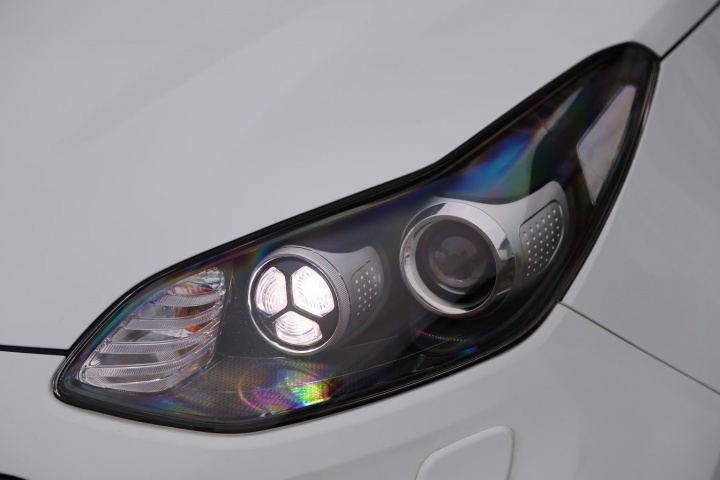 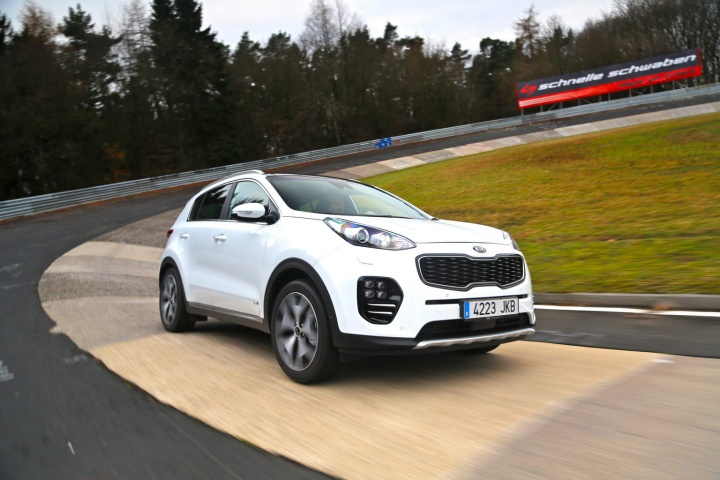 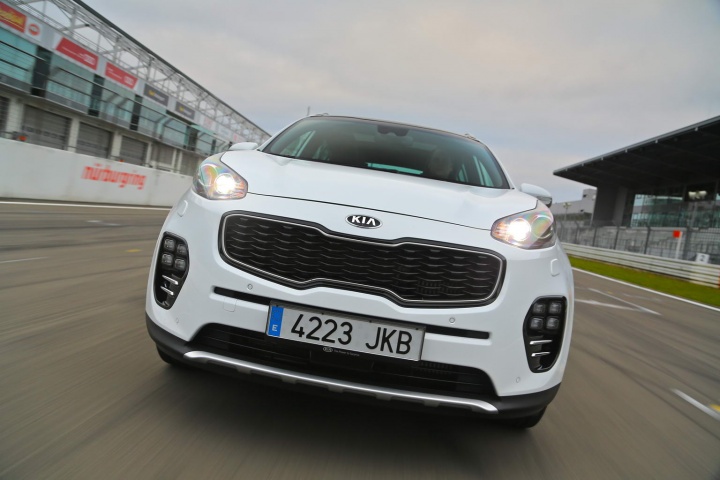 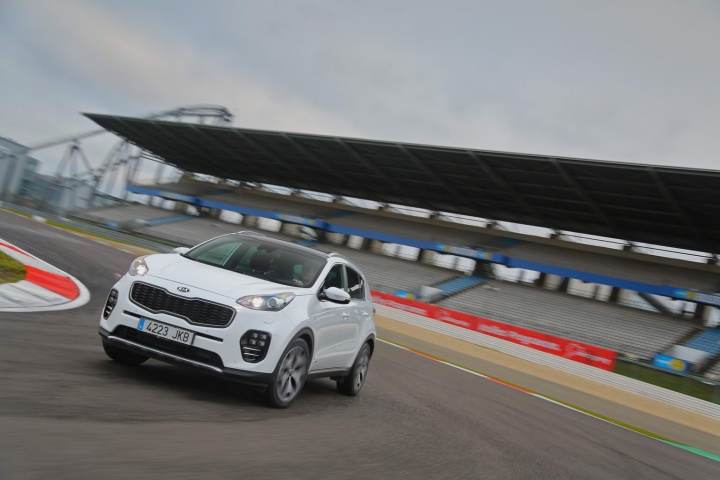 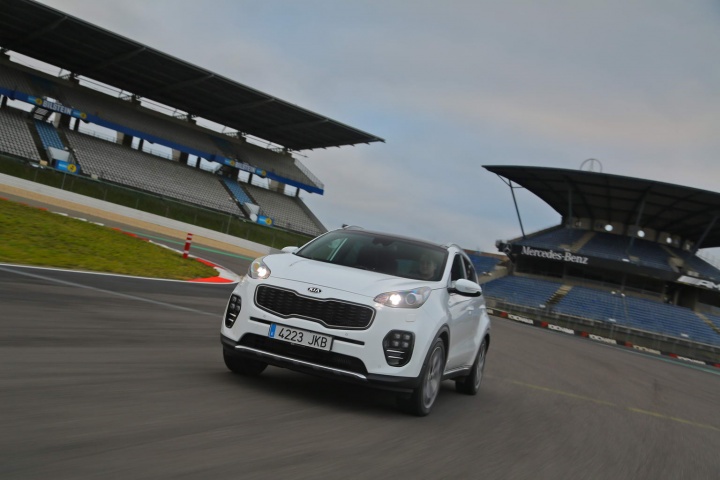 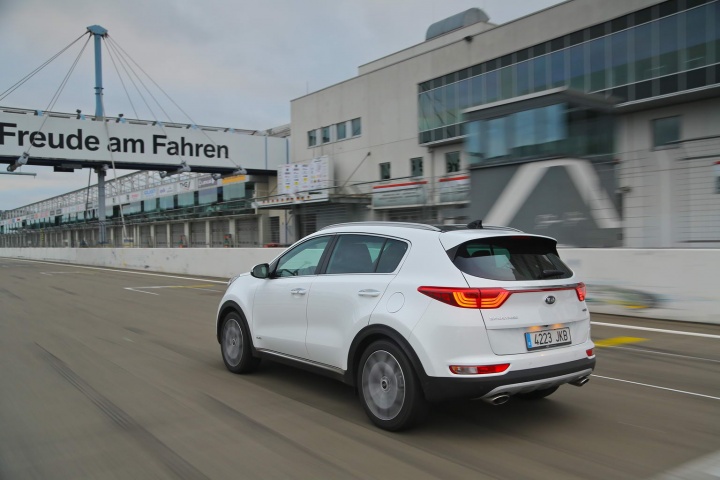 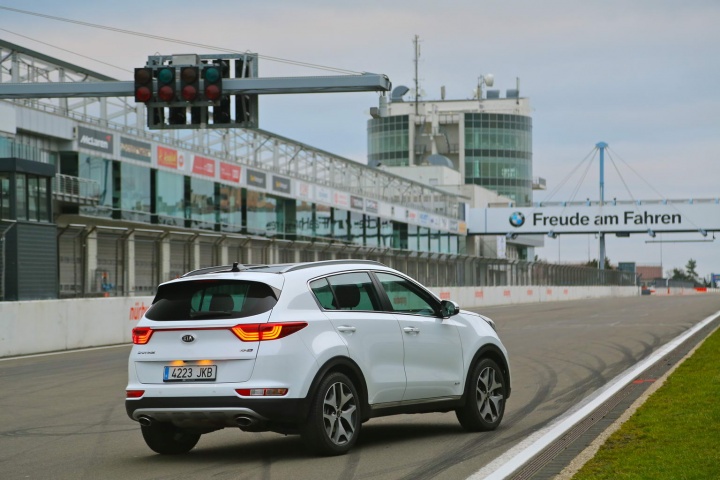 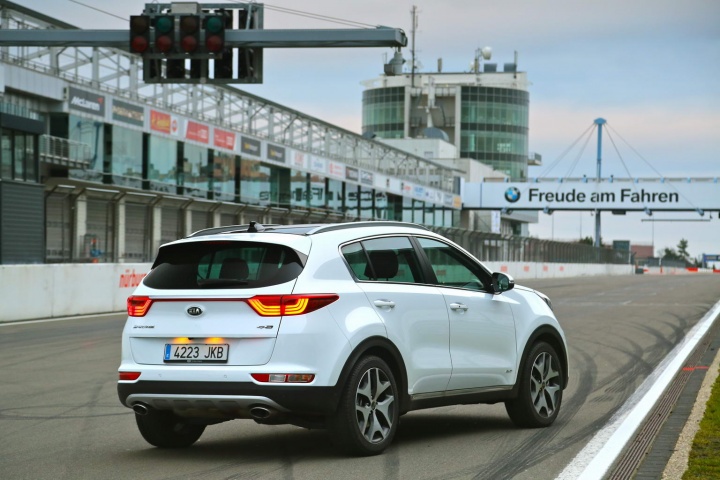 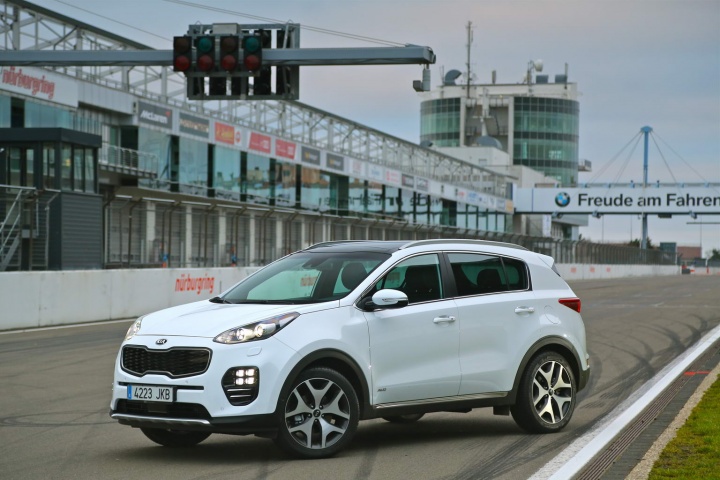 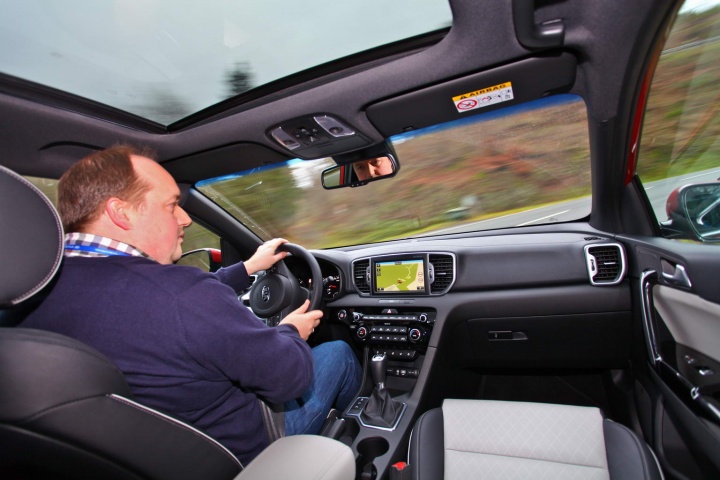 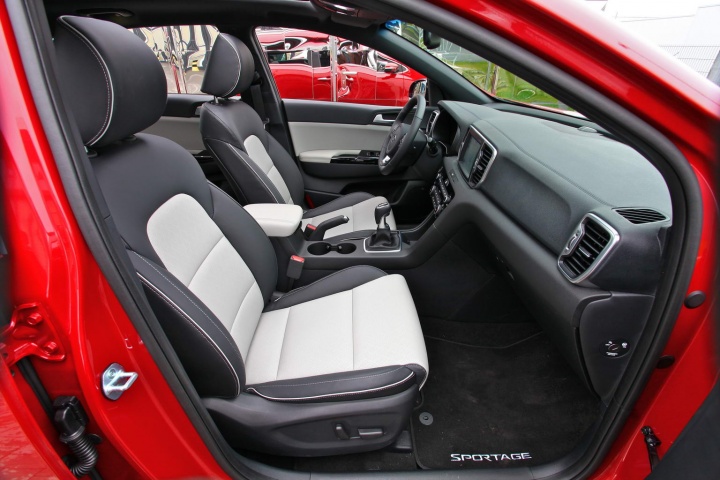 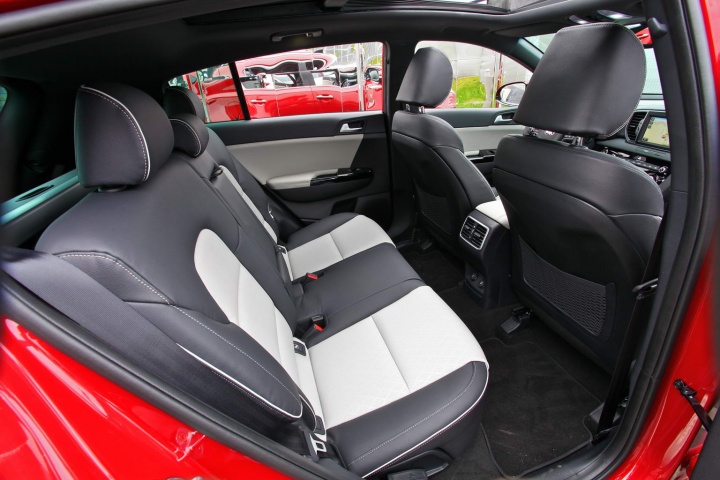 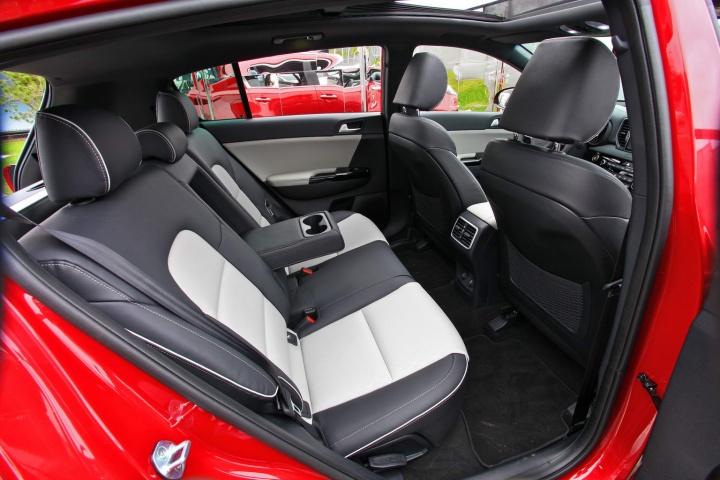 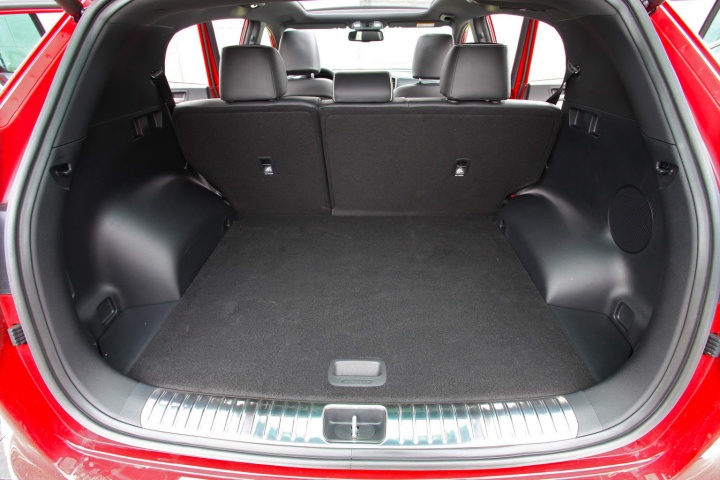 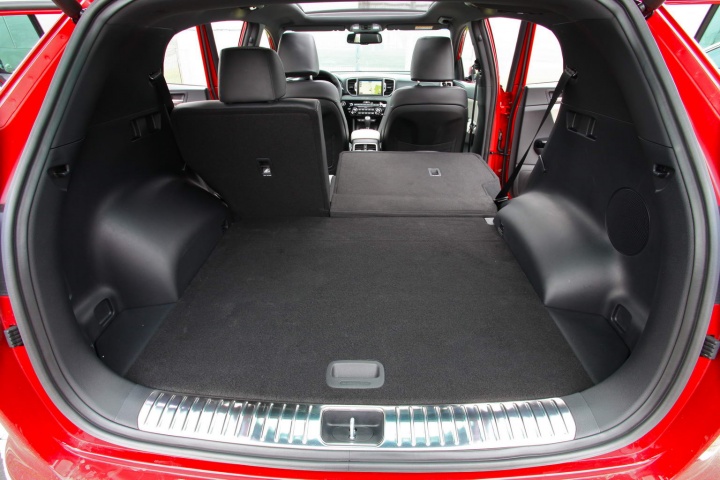 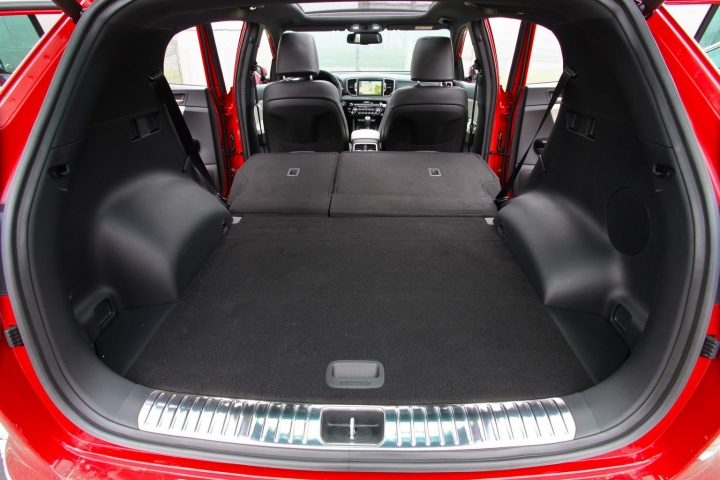 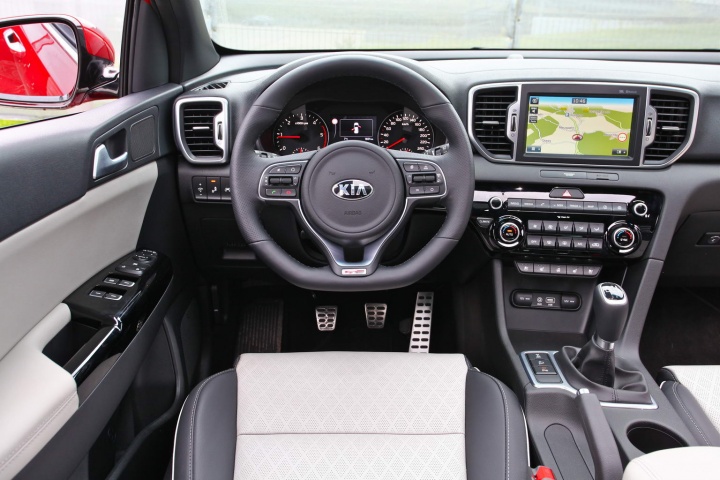 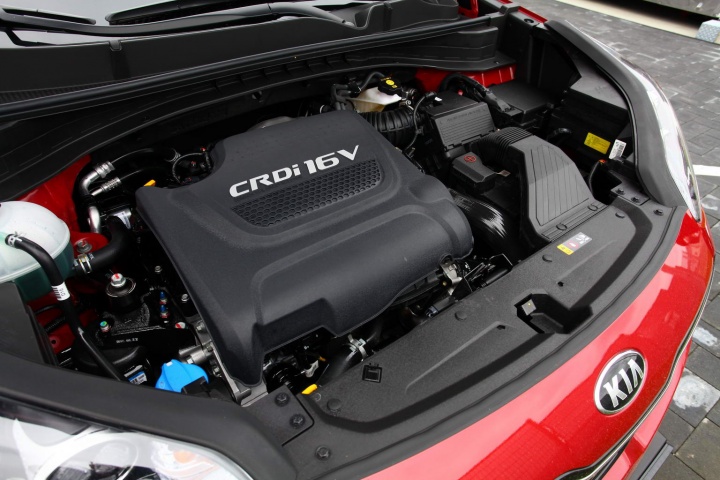 We get an early drive of the fourth-generation Kia Sportage in pre-production guise.

Kia has made huge improvements to its successful Sportage crossover and although we've only had a drive of near-production ready cars as yet, already the signs are looking very promising for the Korean manufacturer. The Sportage feels like a real premium product and once we've driven the SUV on a wider variety of roads later this month, we reckon we might be looking at a vehicle that's tilting for outright class honours against the likes of the Nissan Qashqai, Hyundai Tucson and Renault Kadjar.

We're big fans of the rear-end styling of the Kia Sportage, with its LED light signatures, twin-spaced exhausts and its chunky stance. We like the profile of the Sportage too, which harks back to the Mk3 but features fresh, crisp styling lines to make it obviously the new product. We think the attractive alloys are smart and the GT Line specification (not yet confirmed for Ireland, but we hope it will be) is tasty looking, as it features some aluminium trim and those quad 'ice cube' LED daytime running lights (DRLs) that Kia is making its signature. We also approve of the fact that, while it has grown longer and has a stretched wheelbase, the Sportage looks no bigger than its predecessor; in fact, it appears more compact and muscular.

Sadly, it's the front end that's the problem, to these eyes at least. The tiger nose grille is fine and so are the general proportions, but the high-level headlights separated away from said grille are a feature we're not so sure on. Maybe they will grow on us with time, but at the moment, it leaves the car with a somewhat surprised expression and looking at it for long always keeps bringing the Nissan Juke, no one's favourite piece of car design, to mind.

There are no qualms with the cabin, though, because the continual improvement of Kia interiors over the past five years has culminated in its finest effort yet. Everything feels of an exalted standard and all the displays are clean and appealing, while there's a load of space for five full-sized adults and a bigger, better shaped boot out the back. This is seriously high quality stuff from Kia.

Our test route had us hammering along autobahns from Frankfurt towards the Eifel Mountains, before taking in some sweeping, smooth German back roads to the village of Nürburg. Kia had laid on full and exclusive access to the village's world-famous track, although resurfacing work on the Nordschleife rather curtailed any activity to be had there. However, we were allowed a fast(ish) lap or two of the GP loop.

What we can tell you at this early stage is that the Korean firm seems to have struck an excellent balance between comfortable on-road manners and pretty impressive road-holding for an SUV. OK, Kia's variable steering - which can be switched between different modes - is never anything less than insubstantial and lacking feedback, but it is at least consistent in its rate of response so you can work around the numbness. And aside from that, the major controls are all excellent.

The brakes are strong enough to haul the Sportage down from speed repeatedly, the chassis exhibits good, clean grip and a lack of understeer when driven hard, the gearbox is slick and precise of throw and body roll is quelled to a high degree. It's not quite a crossover that entirely satisfies the 'S' of SUV, but the use of 'Sport' in its model name sits more comfortably now than ever before.

Of course, this sort of fast driving is not where the Sportage needs to excel, so when it's being driven a little more calmly (if you can call sustained periods of over 200km/h on the autobahn calm) it proves to be extremely refined - and nowhere is this more evident than when trying to listen to the 2.0-litre diesel engine. This is a carry-over unit from the Mk3 but Kia has worked hard to reduce the noise it emits while also making it smoother than before. It's a fine engine, muscular and willing, and ideally suited to the Sportage's demeanour.

Even better, the ride is sumptuous, while tyre, road and wind noise are expertly suppressed at all extra-urban speeds. So while we've not yet driven it on crumbling tarmac nor dealt with heavy traffic flow, the early signs are that the Sportage is going to be a very capable all-rounder that should mix it with the leading lights in its class.

We'll reserve full judgment on the Kia Sportage Mk4 for now, as we're not 100 per cent convinced by its face or by the light steering. We also don't know the full rundown on CO2 figures and economy returns, nor how it will cope with the sort of real-world driving conditions that aren't exactly adequately represented by thrashing up and down German autobahns before lapping the Nürburgring GP circuit. But, by crikey, it already looks very strong in almost all areas, as well as being bloody good value and a markedly more premium offering than its already-excellent predecessor. By those yardsticks, you'd have to say that once the showroom Sportages are ready for action later this month, the leading lights in the compact crossover/SUV market will be looking over their shoulders at it in a nervous fashion, because it's a seriously competent piece of kit. 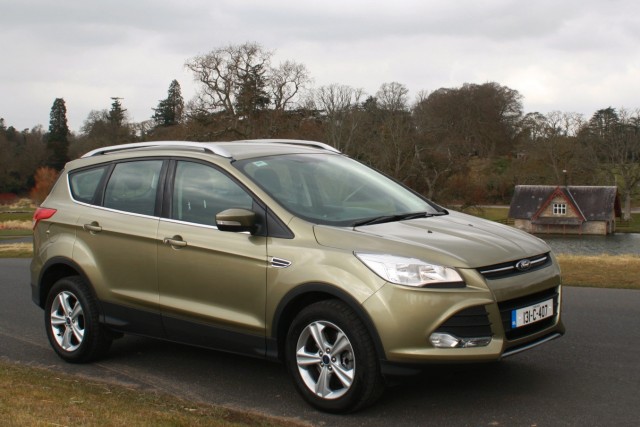 Ford Kuga review
Ford Kuga vs. Kia Sportage: starting to get a bit long in the tooth already and it's pricier than the Kia with a shorter warranty. Nice chassis, though. 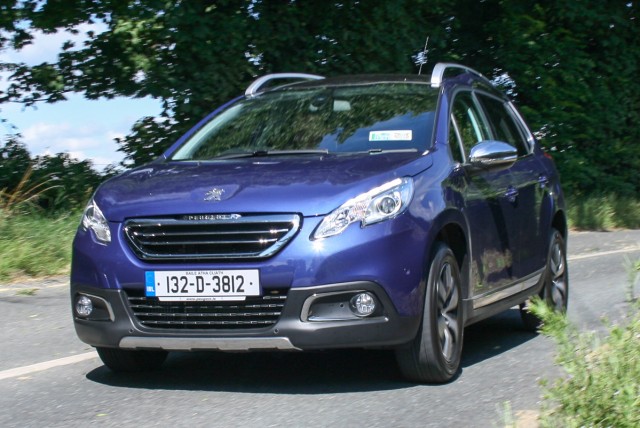 Peugeot 2008 review
Peugeot 2008 vs. Kia Sportage: better running costs than the Kia's predicted best data (119g/km), but it's noisy on the motorway and pricey as just a 115hp diesel.