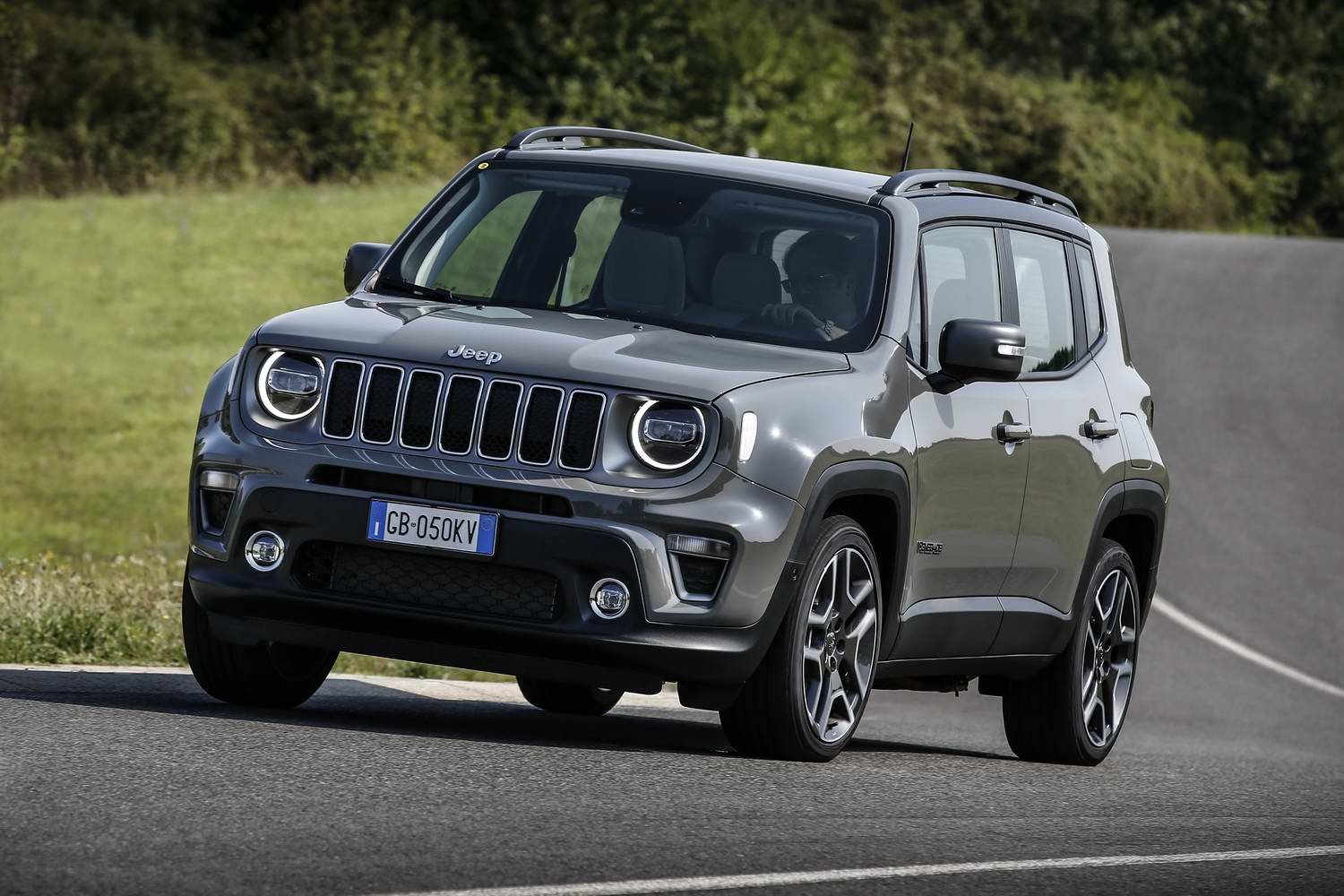 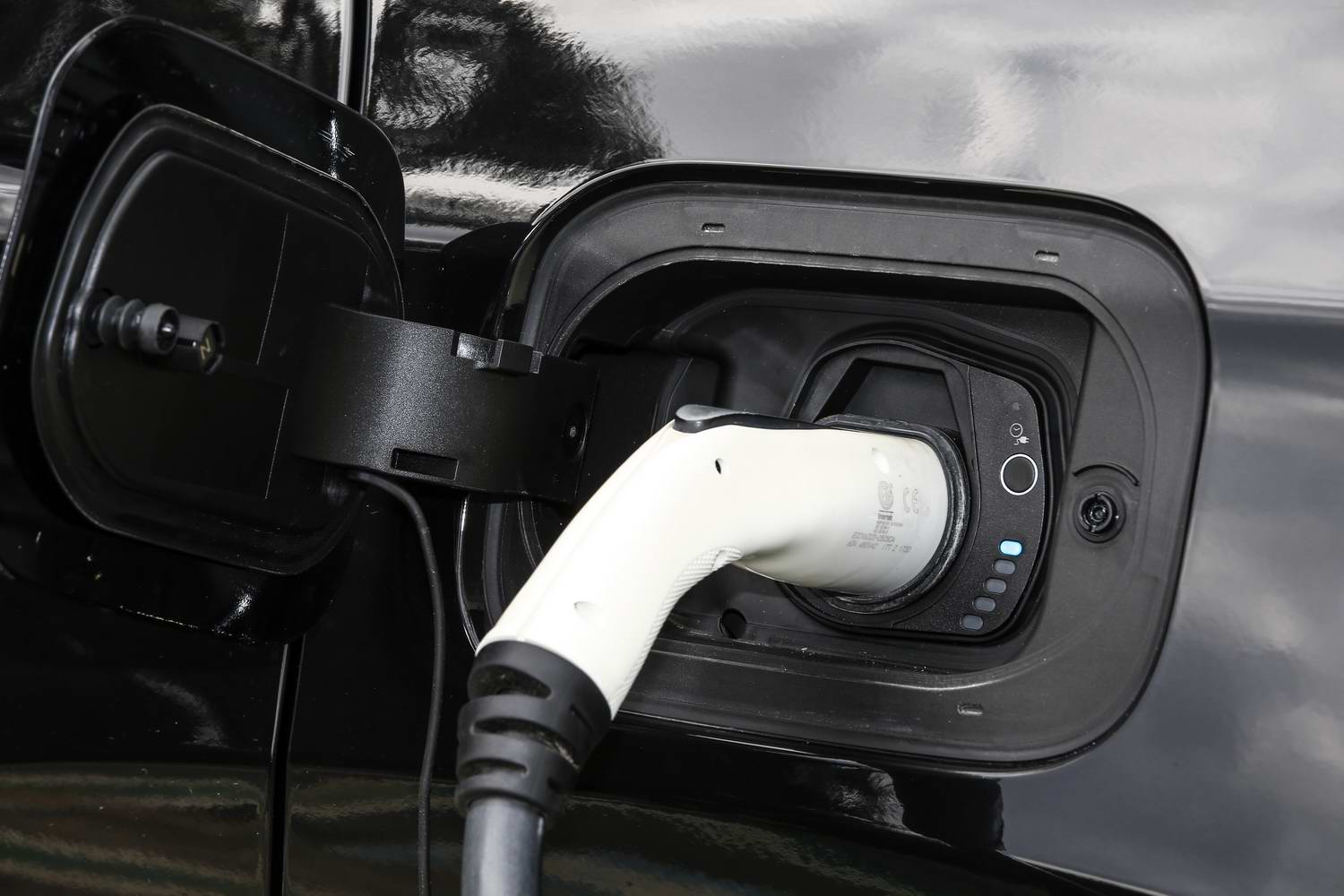 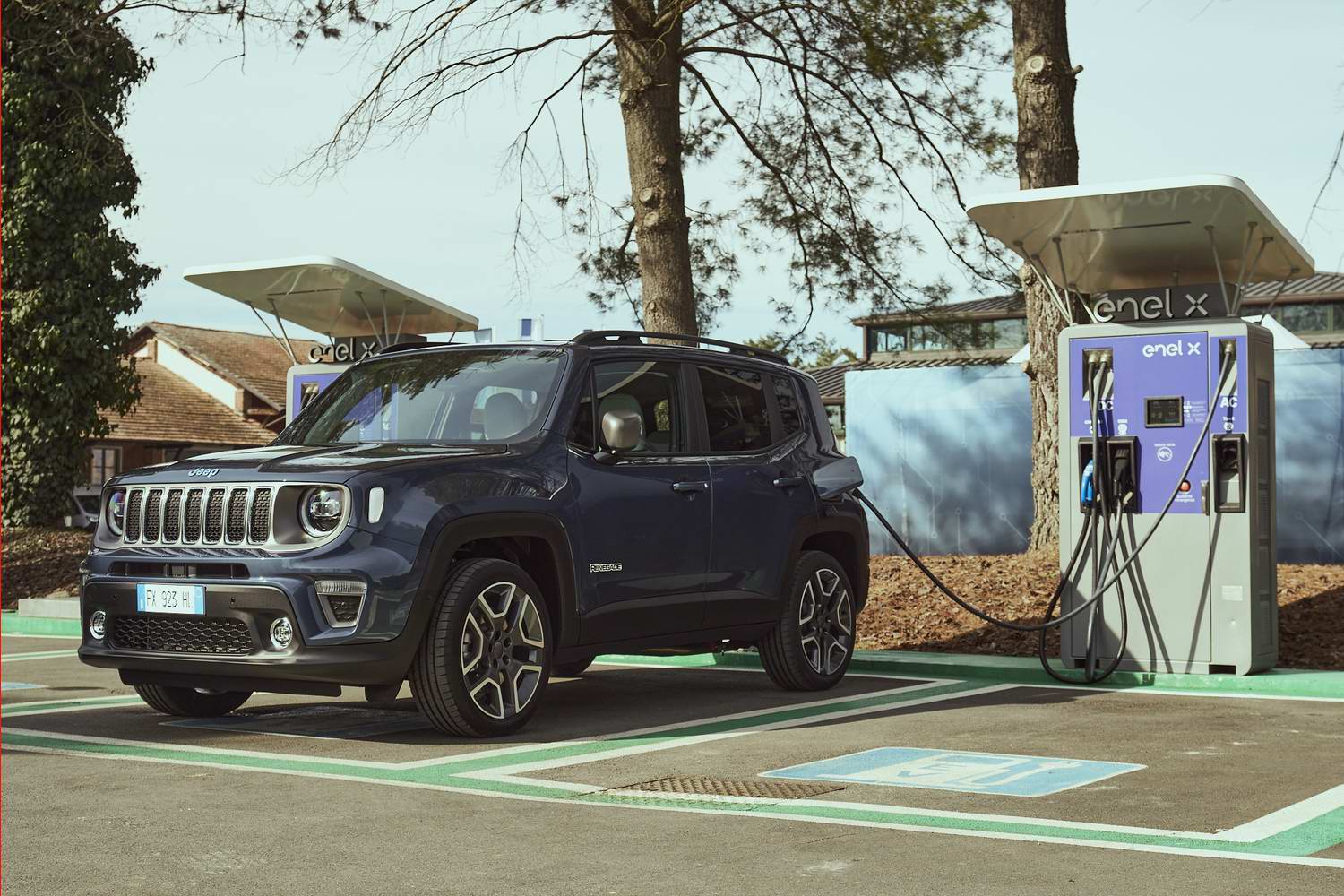 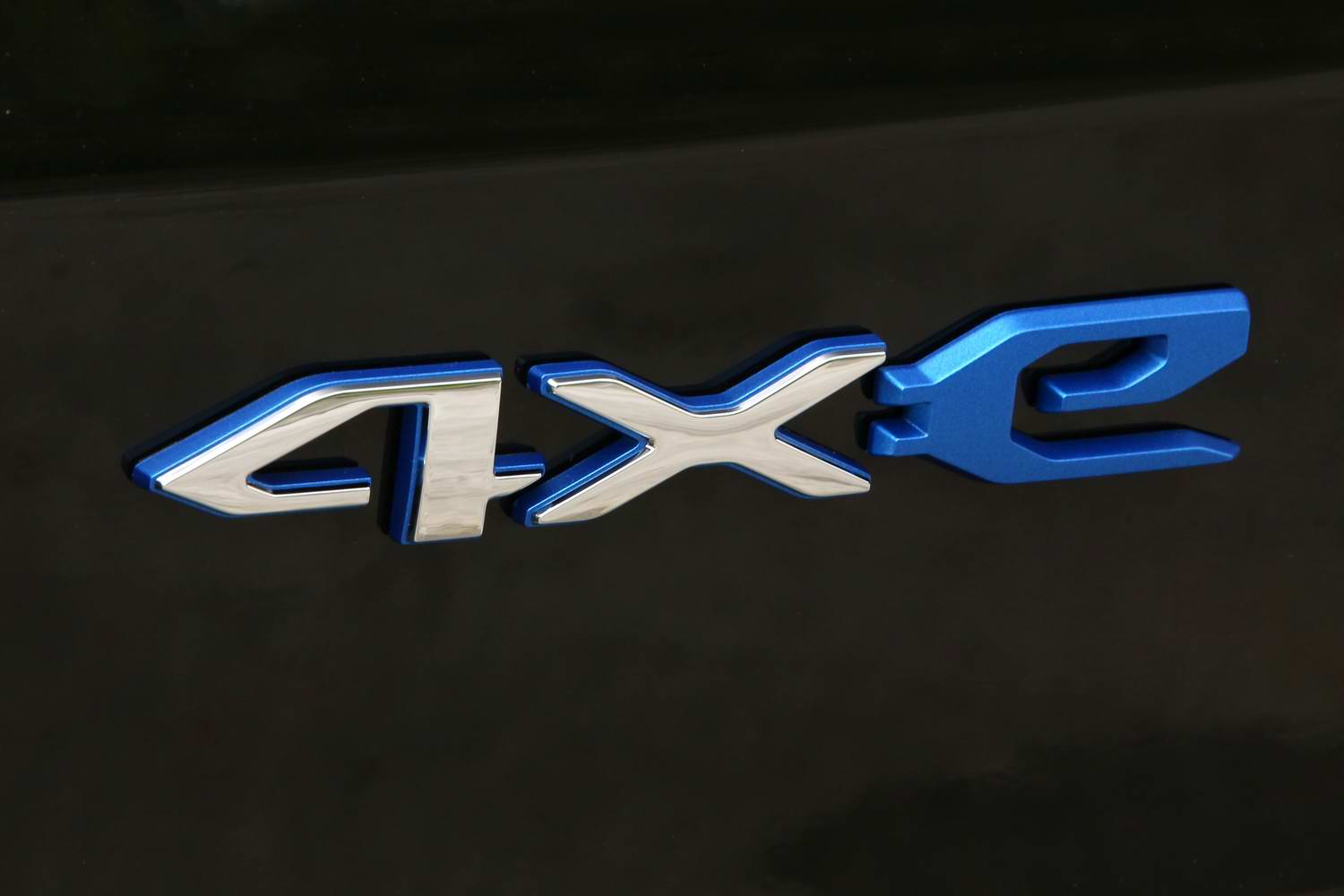 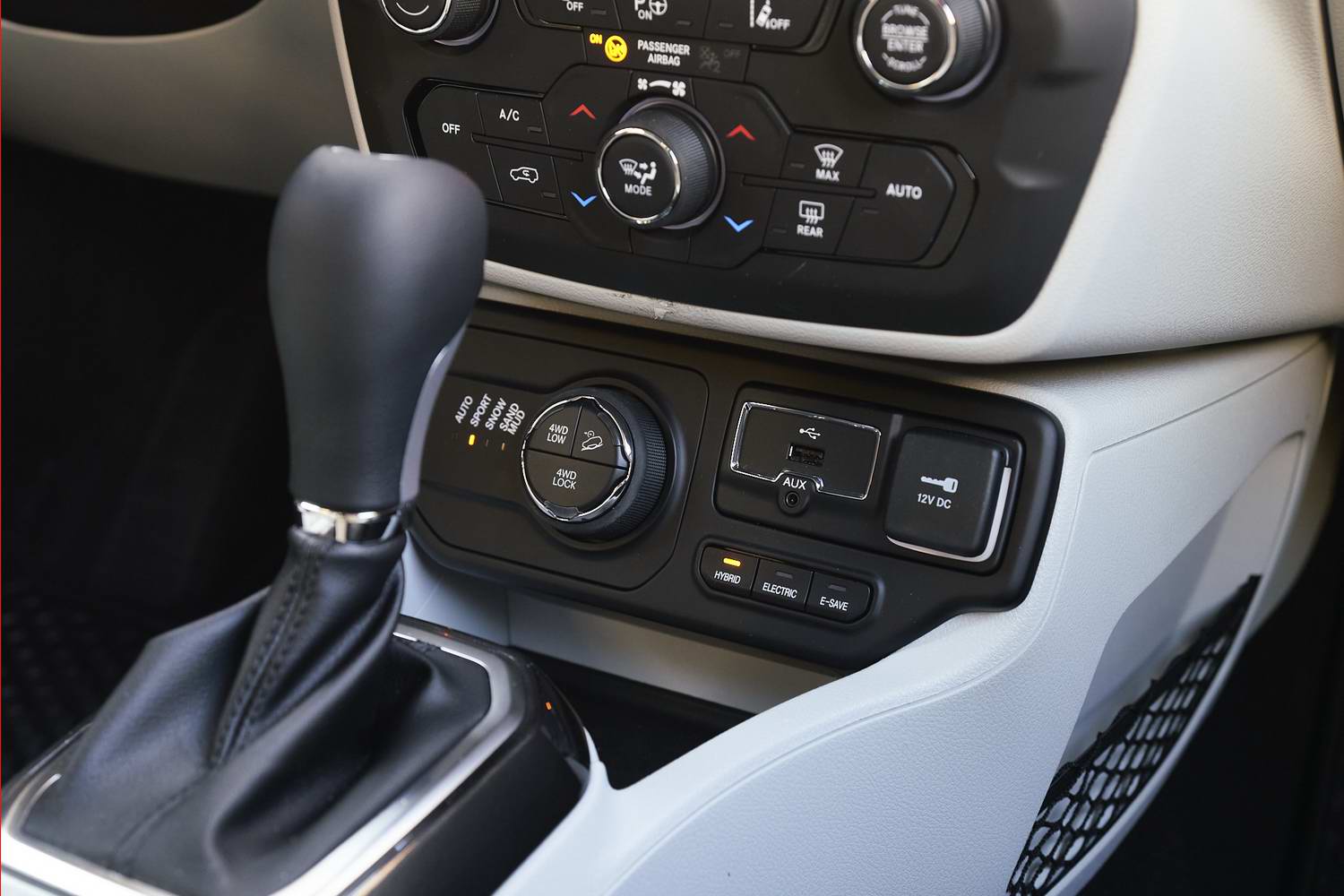 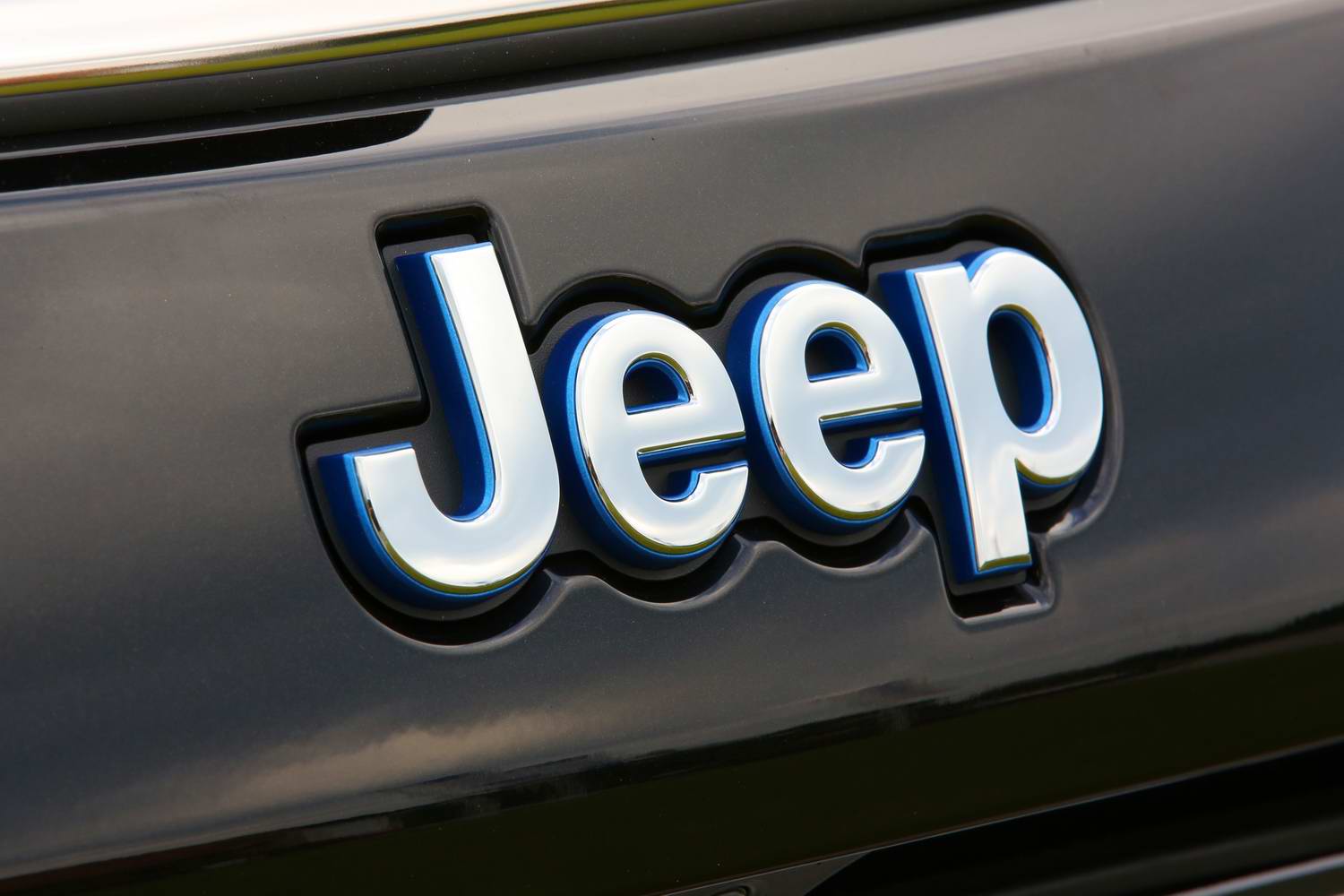 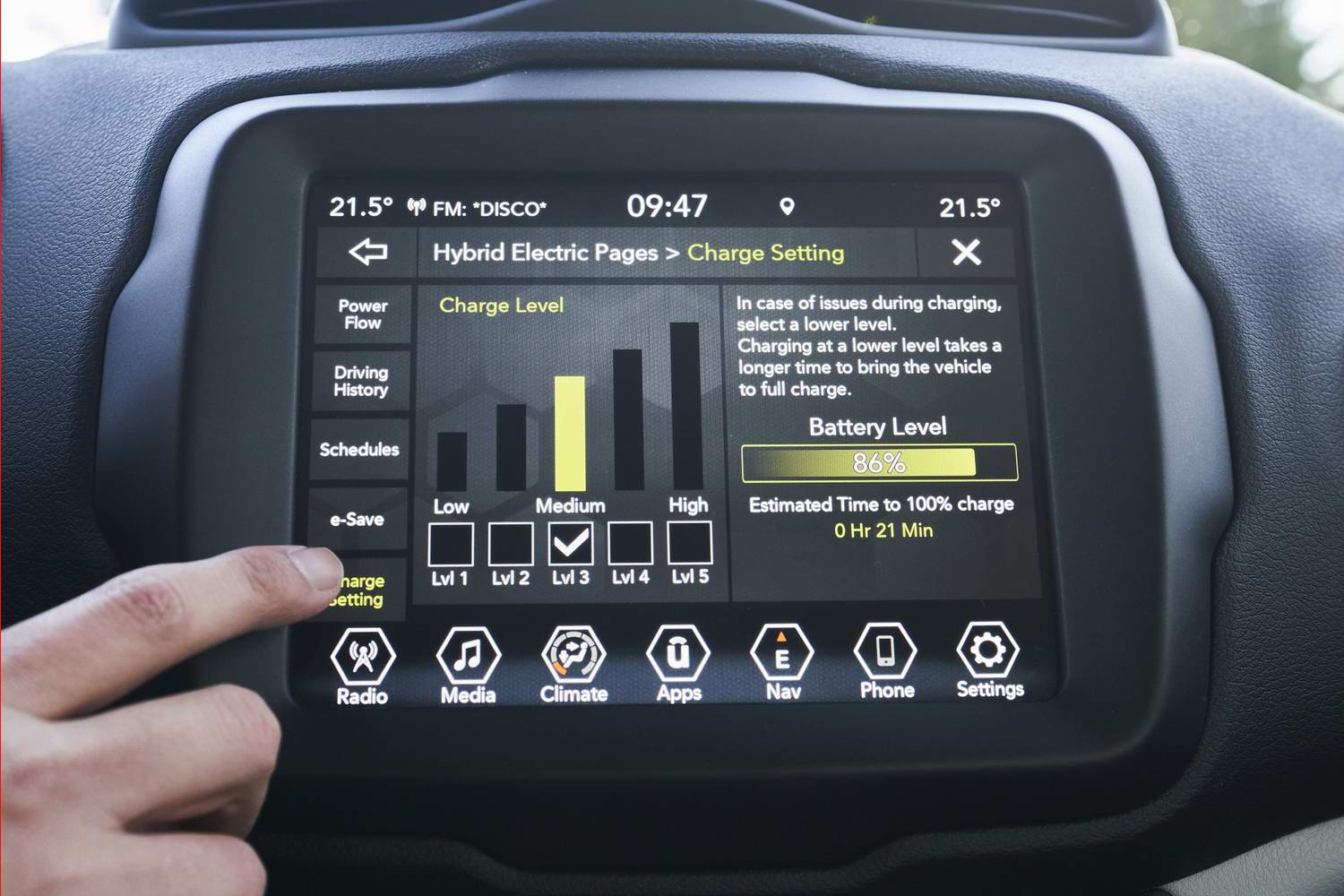 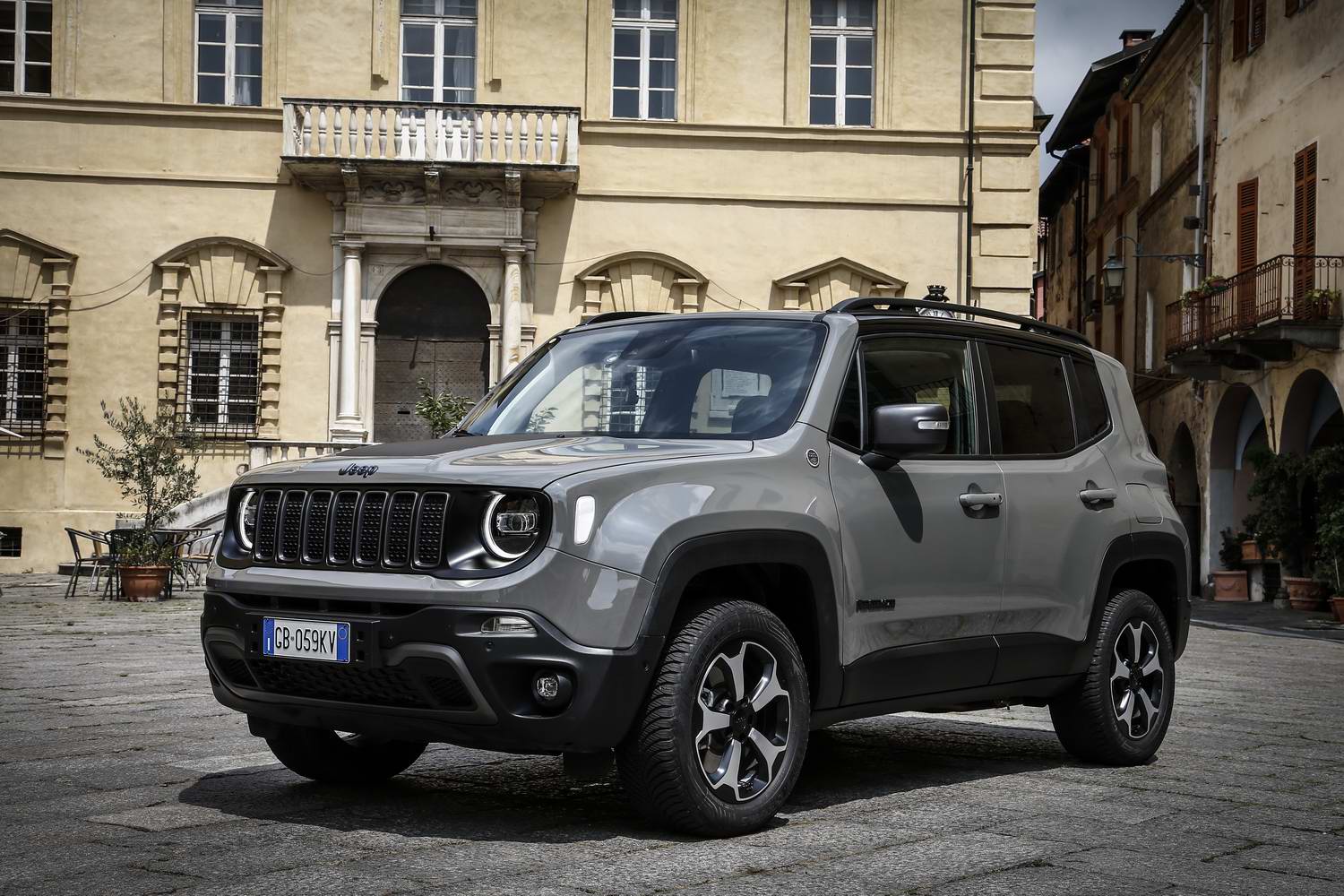 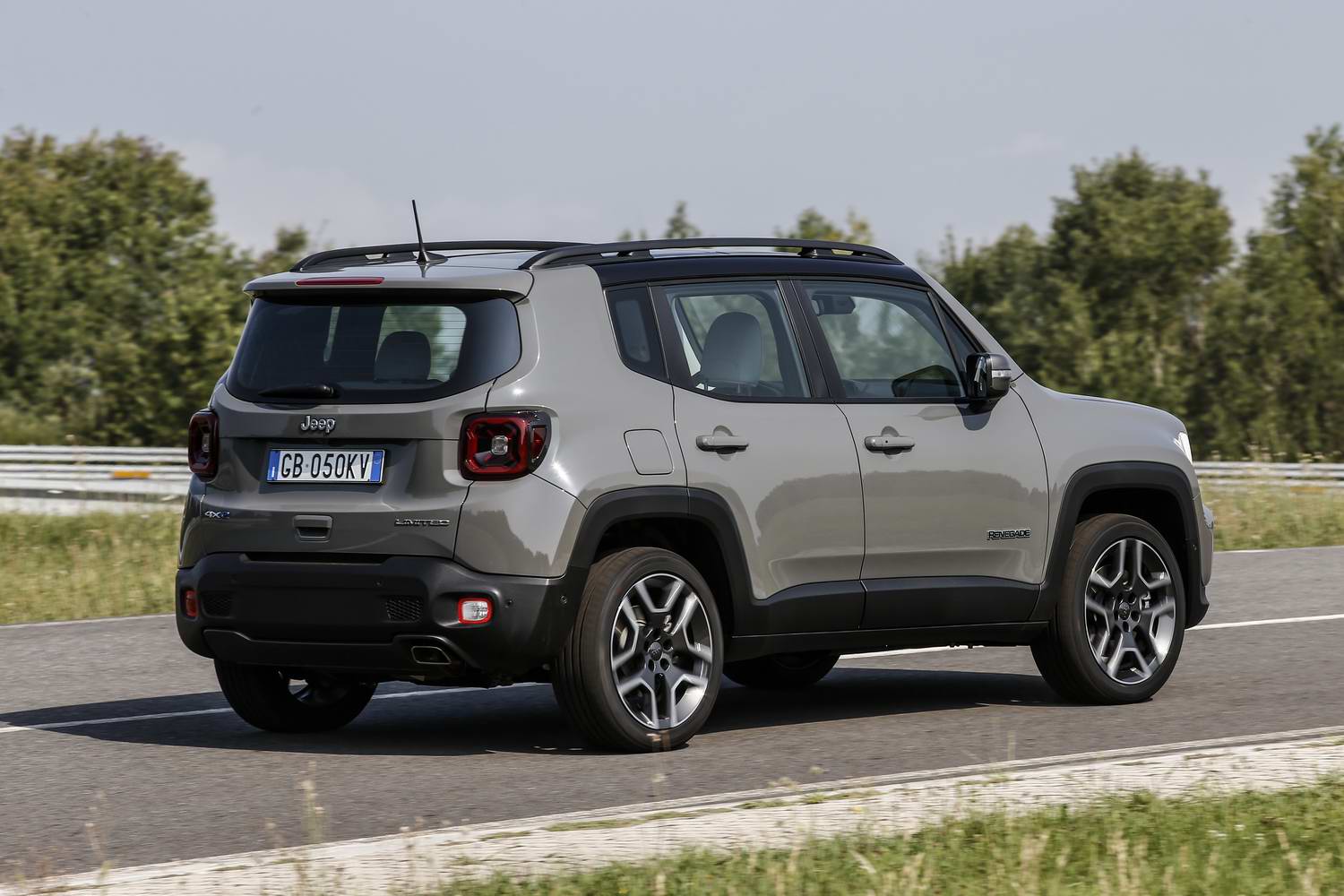 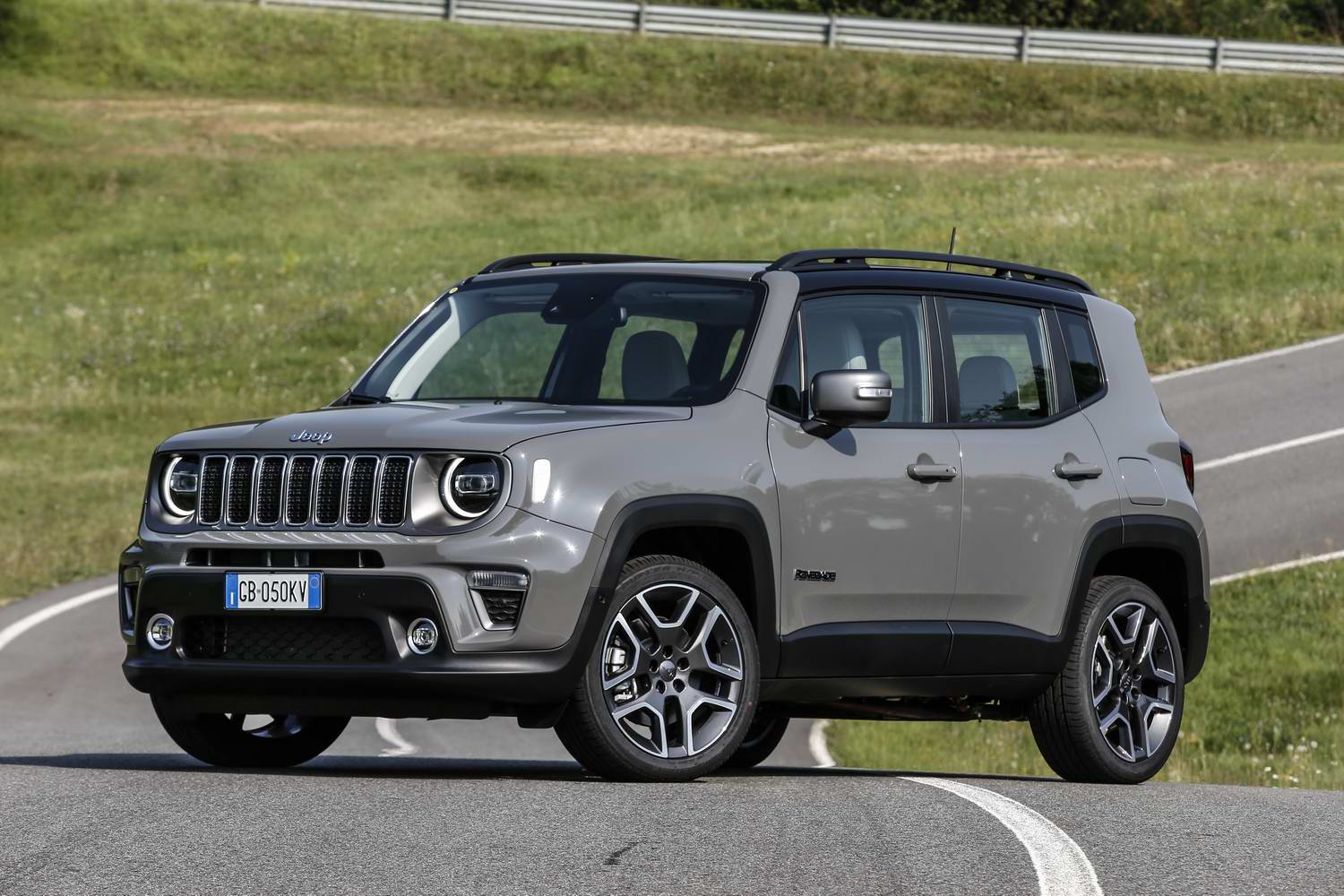 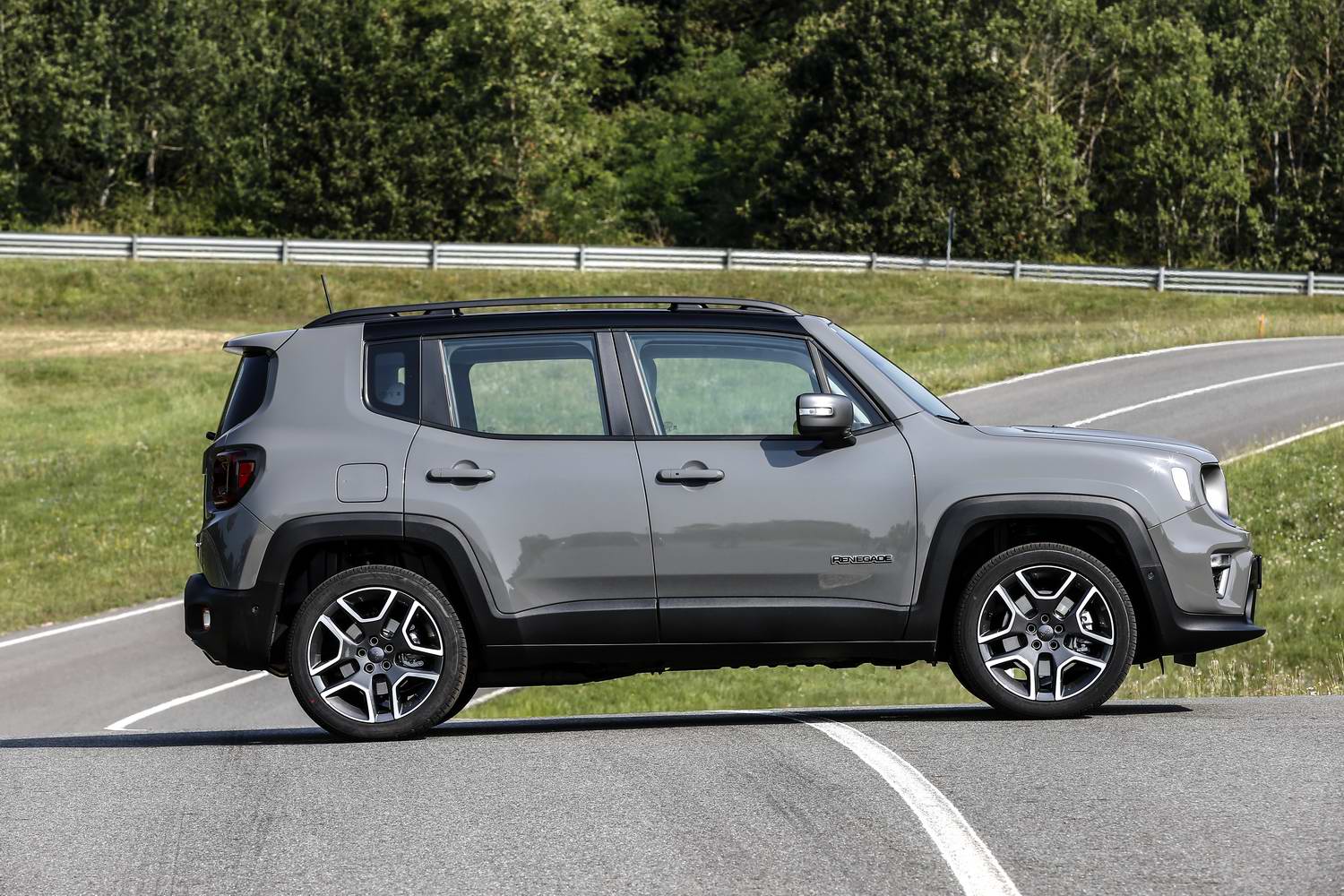 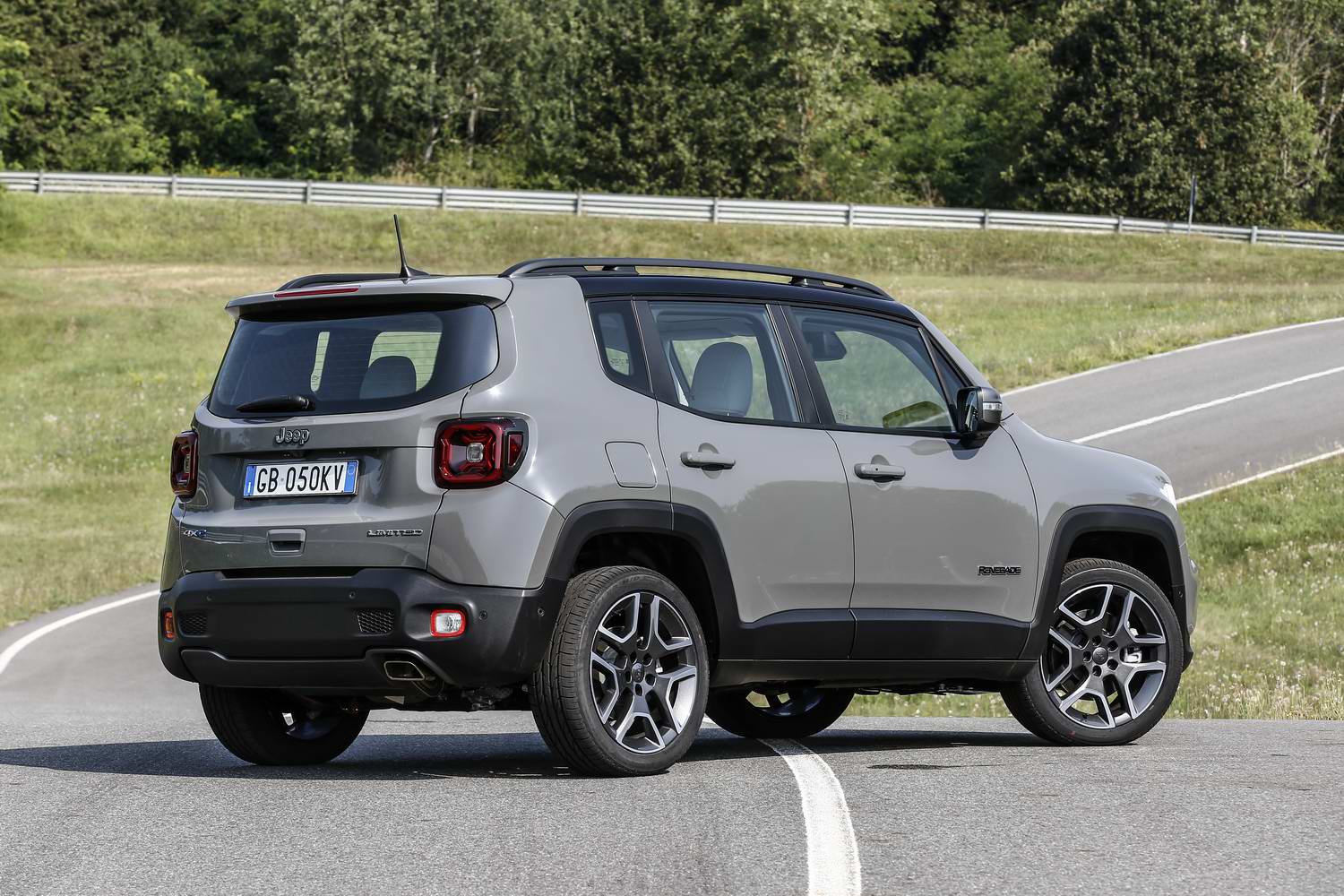 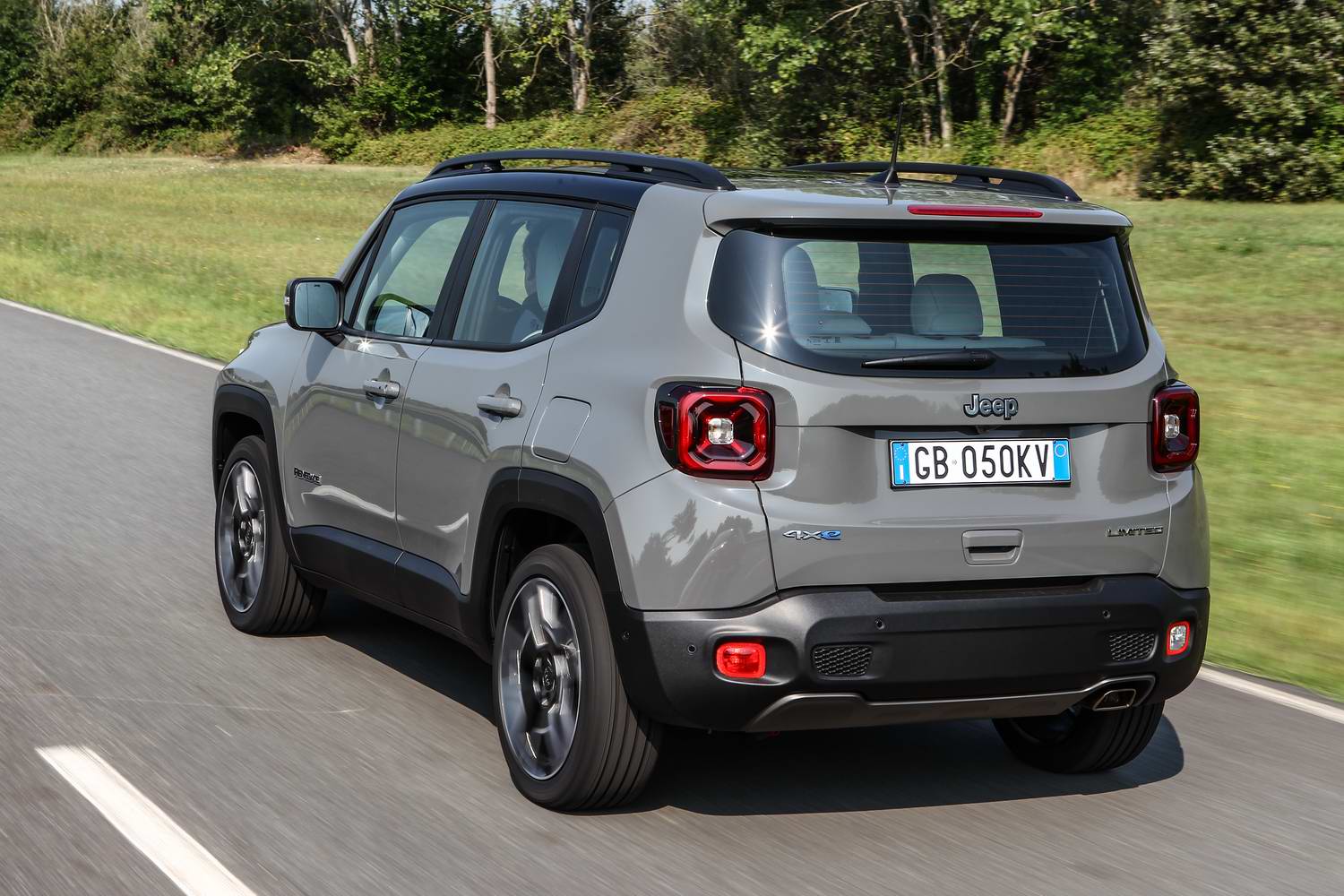 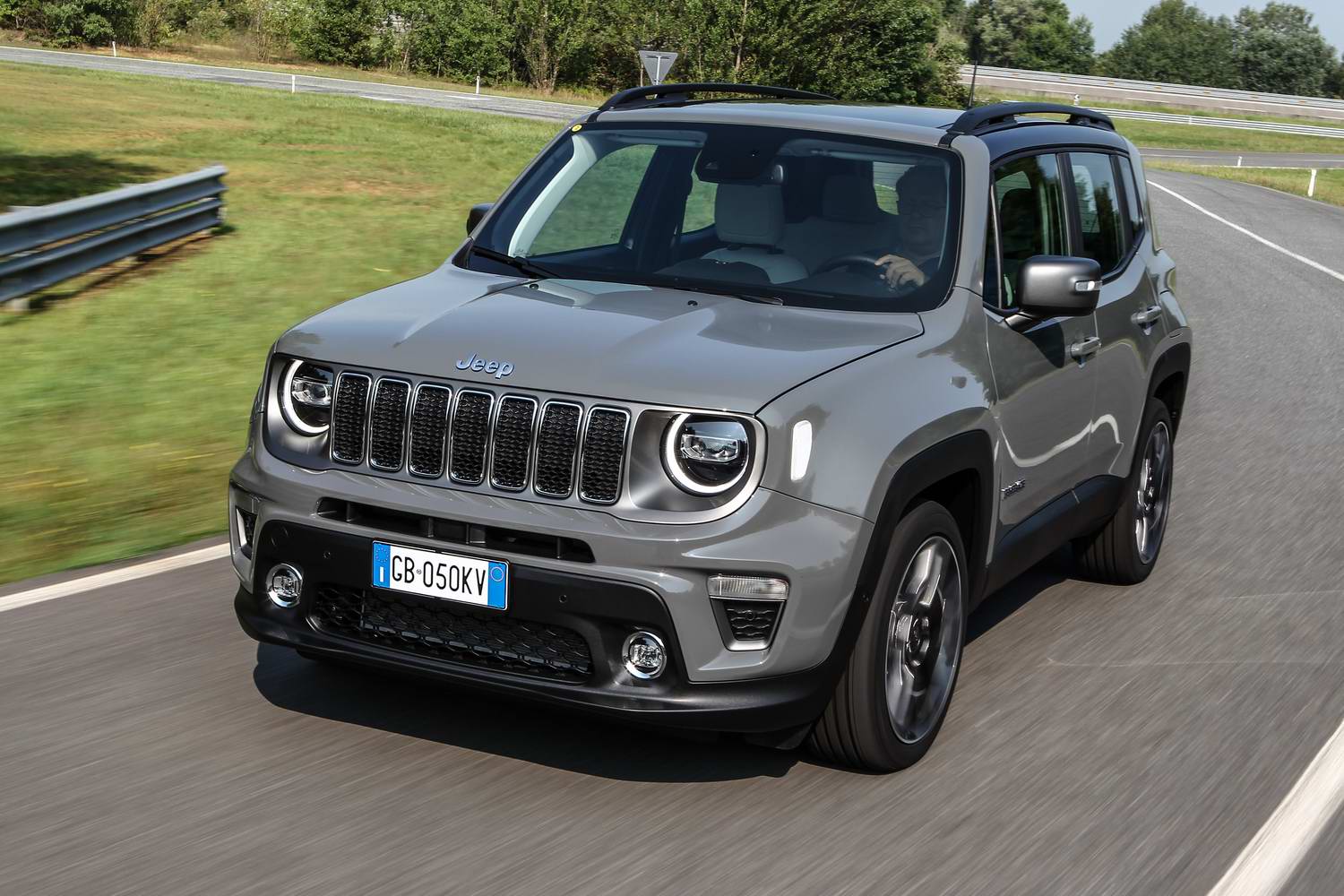 Jeep adds its first plug-in hybrid model in the form of the Renegade 4xe.

The Fiat Chrysler Automotive group, soon to become the leviathan 'Stellantis' as part of its merger with the PSA Peugeot-Citroen alliance, has been slow to the electrified party, but with mild hybrids emerging in its Fiat brand and an all-electric 500 on the way, now it's time for Jeep to get in on the eco-act. To that end, here's the first-ever electrified model in its history, the Renegade 4xe plug-in hybrid.

The Jeep's set-square appearance is something to be commended in the B-segment crossover marketplace. It doesn't go for the soap-bar styling of nearly every single one of its broadly comparable rivals and it's all the better for it as a result. The 4xe retains the rugged appearance, being almost identical to its conventionally powered rivals, so on the outside you're looking for blue-tinged badging and the additional 'filler' cap (for the electric plug-in socket) on the nearside-rear flank of the car, while inside it's basically some new hybrid-specific pages on the 8.4-inch uConnect infotainment, additional power-flow and battery condition displays in the instrument cluster's TFT screen, a power gauge on the right of said cluster and extra buttons on the console - three at the bottom of the centre stack switch between 'Hybrid', 'Electric' and 'E-Save' drivetrain modes, and then there's a battery-icon button near the electronic parking brake that turns on eCoasting to harvest more kinetic energy while the Renegade is on the move. Otherwise, it's the same cabin: spacious, a decent boot (which only loses 20 litres of capacity compared to a regular Renegade due to the AC/DC converter housed on its right-hand side) and fairly nicely appointed, if not particular thrilling to look at nor cutting-edge for its human-machine interfaces.

So, before we get to driving impressions, a quick few words on the technology of the Renegade 4xe (which is pronounced 'four-by-E' according to Jeep, and not as it looks when written out). The internal-combustion unit employed is the Global Small Engine (GSE) 1.3-litre turbocharged four-cylinder petrol, which itself has a choice of either 130- or 180hp outputs for quoted system peaks of either 190- or 240hp. Whichever one you go for, this 1.3 turbo has a belt-integrated starter generator attached to it and a 44kW (60hp) electric motor located on the rear axle for good measure. At the front of the car there's a six-speed torque-converter automatic gearbox, chosen apparently for its low-speed control when off-roading and also perceived weight-saving benefits over Jeep's nine-speed gearbox used elsewhere in the portfolio (although we suspect it'll be a cost issue, more than anything), and as there's no driveshaft between the axles then the 11.4kWh battery is housed in the transmission tunnel to preserve passenger space. A unique plug-it-in-yourself 3kW Wallbox is available for the 4xe, which converts a domestic socket's output to a high enough level to charge the Renegade's battery in five hours; however, if you want the quickest charging time, a qualified electrician will be required to wire up the 7.4kWh unit, which'll give the Jeep 80 per cent of its charge in around an hour. Interestingly, a function called Powerloop means that, even when the battery pack is showing as 'empty' on the in-car read-outs, it still has enough juice to provide power to the rear axle of the Renegade 4xe, meaning that its eAWD (electric all-wheel drive) is permanent and not part-time.

Jeep Ireland is likely to offer the Renegade 4xe in a road-biased spec, which is the Limited, and then the Trailhawk with chunkier tyres and additional off-roading kit. The likelihood is that the Limited will run the 190hp hybrid drivetrain, while the Trailhawk will be the 240hp model. As we reckon most people are going to buy this 4xe to run it on the road, we'll focus on the 190hp Limited for this review, although we drove both versions of the 4xe during our test.

The hybrid Renegade certainly feels quick enough, in either format, with a good slug of low-down torque and impressive traction from the eAWD system. Furthermore, driven reasonably gently, you'll not find the powertrain wanting that much for refinement - the 1.3-litre engine drops in and out of operation discreetly and, provided you don't hurry it, the six-speed automatic doesn't become easily flummoxed. The ride's nice, too, comfortable and controlled, without much to note in the way of banging over larger imperfections. The Jeep will also soak up bobbly road surfaces well, which makes it excellent in town where you can run it in EV mode for up to 50km... and this range looks a reasonable claim, as well, as careful management of its modes (at Jeep's behest) saw it return 8.1 litres/100km (34.9mpg) across 105.9km of varied driving, with 38.4km of that conducted in pure electric, zero-emissions goodness.

Right. But 34.9mpg isn't anything that impressive, is it? No. So here come the issues. The six-speed gearbox might be OK when you're not asking much of it, but it can seem dozy and dim-witted if you decide to 'nip' into a gap in traffic. At higher revs, the 1.3-litre engine starts to sound coarse and feel breathless, a fact that is much more noticeable on the 190hp model than it is on the 240hp variant. The steering on the Jeep doesn't offer much feel and is saddled with curiously hefty weighting, while there's pronounced body lean in corners and a definite sensation of there being a lot of weight across the back axle - the Renegade moves around most oddly in corners if you begin loading the outer suspension up as much as you dare. At a steady 130km/h cruise on the autostrada in Italy, using E-Save to preserve battery power for later in the test drive, a 9.3 litres/100km (30.4mpg) figure speaks volumes about the increased weight that 1.3-litre engine is being asked to haul about when it doesn't have the back-up of the electric motors to augment it - and, furthermore, the Renegade's bluff shape means there's considerable blustery wind noise seeping into the cabin at speed, so it's not the most elegant cruiser in the world. Or even this class, if we're honest.

Overall, it's a fine if not startling execution of a small petrol-electric hybrid drivetrain and it's one that will work well if you charge it regularly, giving you the sort of real-world economy that allows these plug-ins to make sense in the current day. But we can't help feeling that the lovely little T3 1.0-litre triple would be a much better choice all-round for most Renegade buyers, if they're into the chunky looks of this compact Jeep.

We're waiting for prices and specs in Ireland to be confirmed for the 4xe, but its low CO2 emissions should massively cut the VRT and result in that weird quirk whereby the most advanced plug-in hybrid models in a given car's line-up are often among the cheapest to buy. If this happens with the Renegade 4xe, then it's why we've given the car a three-and-a-half-star rating - in other markets, it's considerably more expensive than other Renegades, which doesn't make it quite so appealing.

The Jeep Renegade 4xe's selling point is that, while it's a plug-in hybrid like other rivals in the compact crossover class, it maintains all of this marque's prowess for off-road capabilities. The 4xe, certainly as a Trailhawk, will traverse terrain that would simply be completely beyond the remit of a Kia Niro, for example, so if you regularly venture off tarmac this is clearly the main contender for you. However, as most people tend to buy hybrids to buzz around cities and towns in EV silence, and therefore want the nicest cabin and impeccable refinement above mud-plugging supremacy, then the Renegade isn't the class leader. It's a pretty good execution of the petrol-electric drivetrain overall, though, and you do get those appealing boxy looks, so the Renegade 4xe may find plenty of traction in this expanding marketplace - especially if the price is right once it is set in stone. 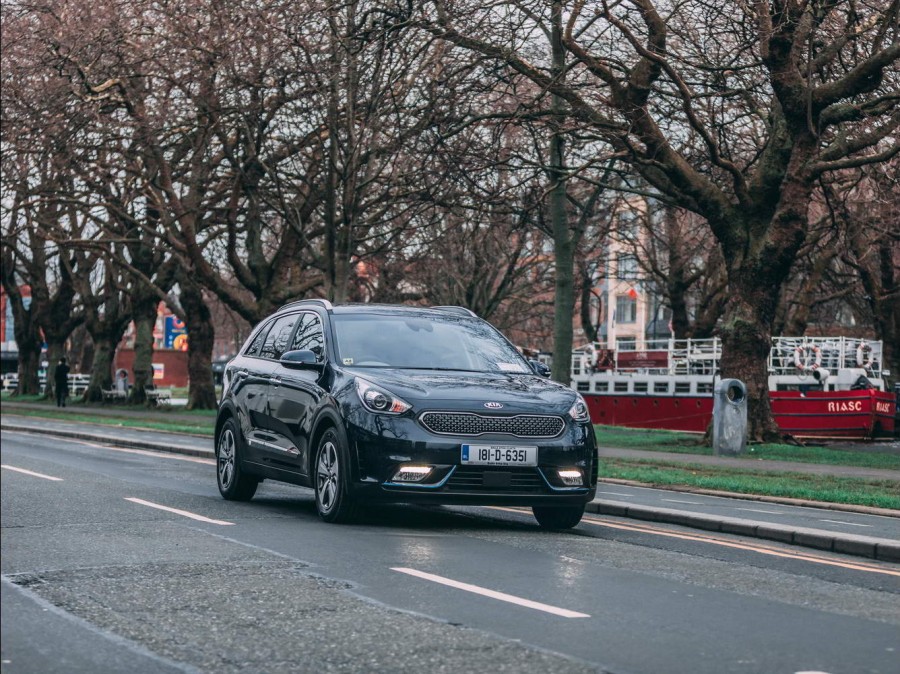 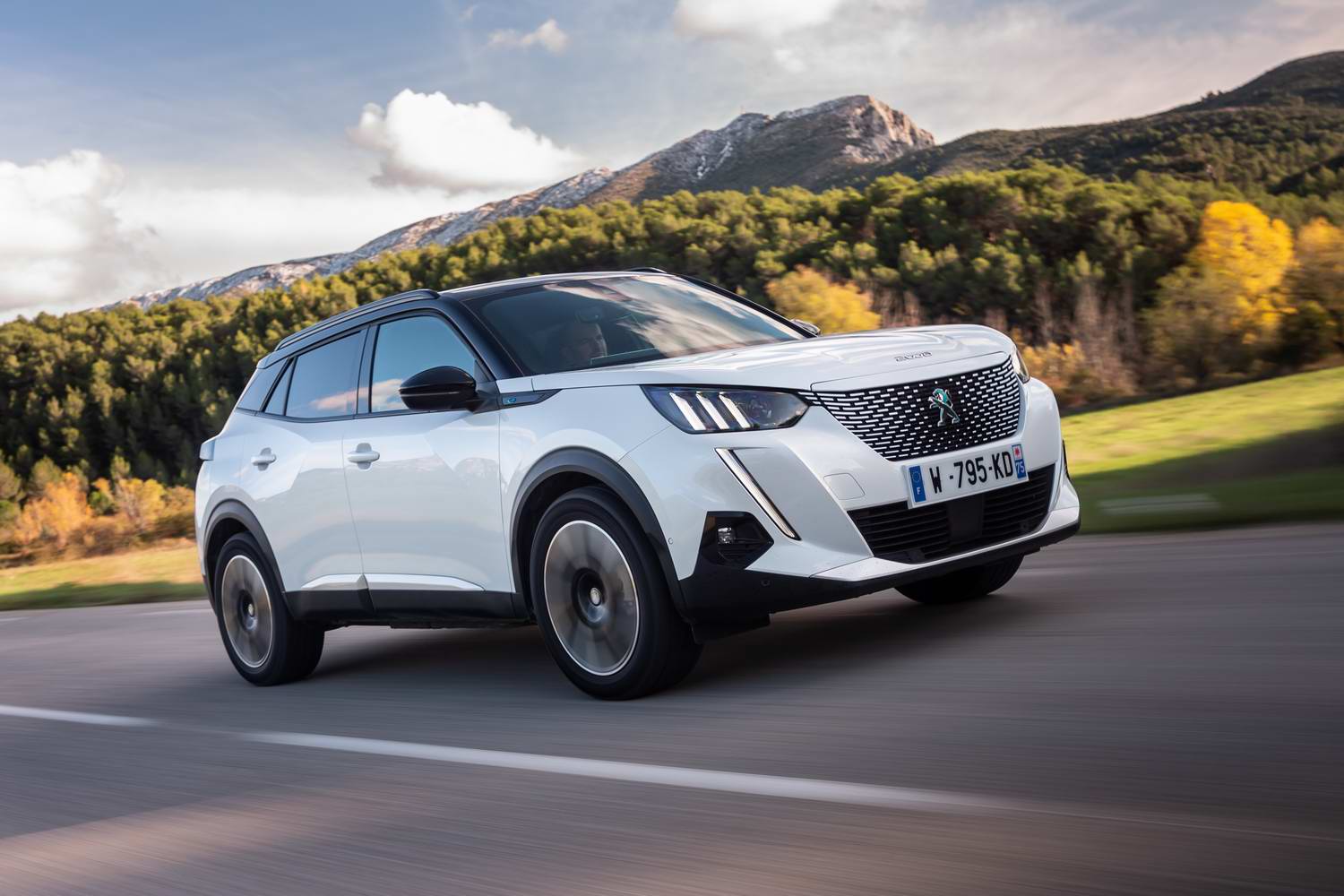 Peugeot e-2008 GT (2020) review
Peugeot e-2008 vs. Jeep Renegade 4xe plug-in hybrid (2021): feeling brave? Then go full electric and try this glorious-looking crossover instead. Again, it's a vehicle that majors on road-going civility, ahead of any 4x4 pretence. 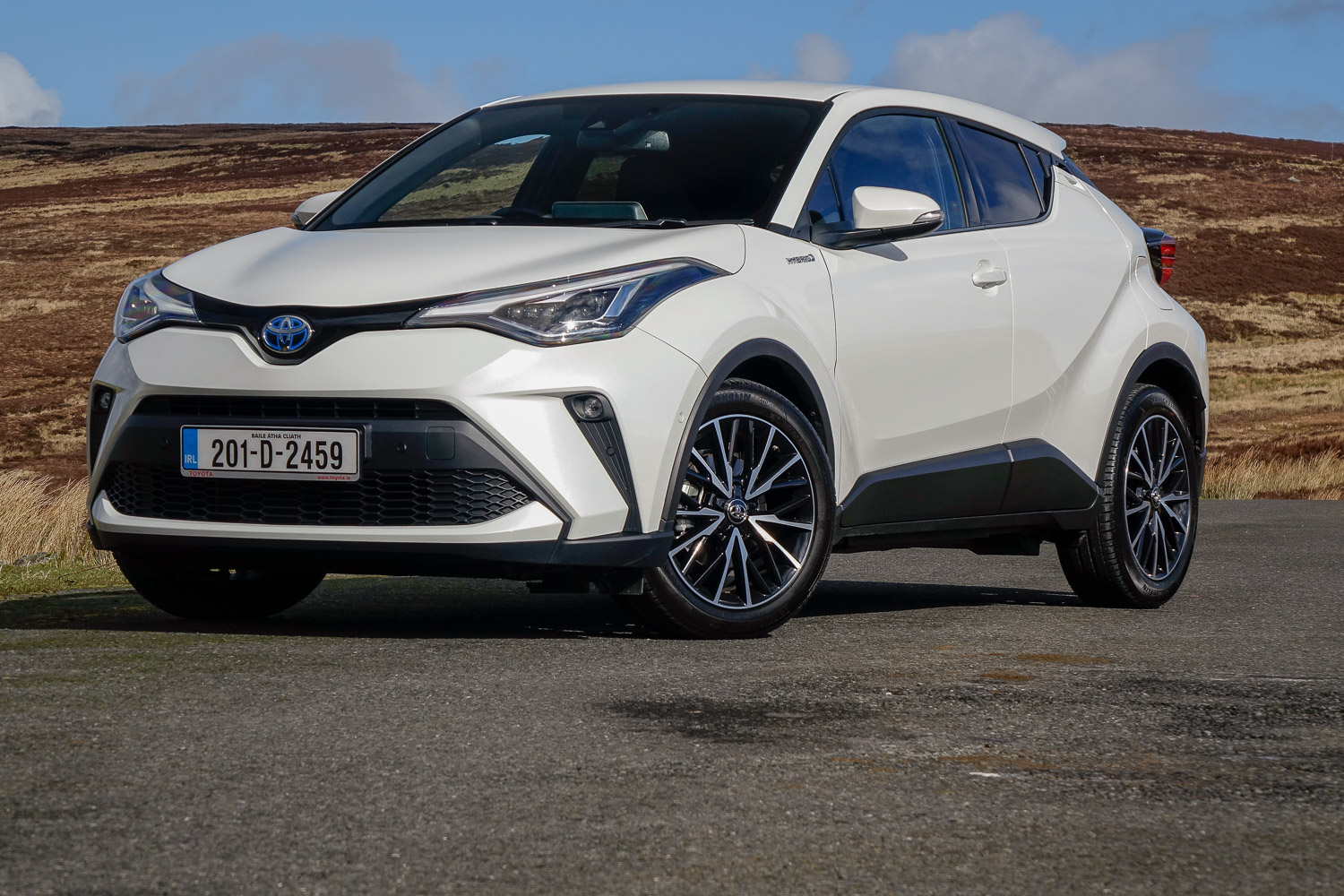 Toyota C-HR 1.8 Hybrid (2020) review
Toyota C-HR Hybrid vs. Jeep Renegade 4xe plug-in hybrid (2021): it's technically from a class above the Jeep and it's also not a plug-in hybrid, yet the C-HR has an excellent chassis and striking looks. Definitely worth a serious look.