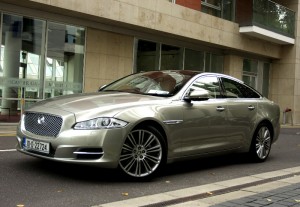 This new XJ is an incredibly imposing vehicle in the metal - it's both massive and visually engaging. The front is dominated by a large grille with a huge Jaguar emblem and those squinty, aggressive lights. Side-on, the XJ looks quite coupé-like and at the rear the lights are probably the car's most contentious area. It looks like it might have been styled to suit the American market.

The interior is stunning. It is spacious - both up front and in the rear. This wasn't something you could say about the old XJ, which had quite a claustrophobic feel to it. There appears to be quite a lot borrowed from the XF, with a large touch-screen in the centre to take care of the car's multimedia, while the JaguarDrive Selector is a silver dial that pops out when you start the car and is used to operate the automatic gearbox.

However, the touch-screen system is slow to respond and is fiddly, especially when used in conjunction with an iPhone to play music. The three-spoke steering wheel has quite a retro feel to it, despite all the technology on show.

Under the bonnet there is a 275hp 3.0-litre V6 diesel engine, which is the same as you will find in the XF 3.0-litre Diesel S. It is whisper-quiet and really quite urgent. The Jaguar is smooth to drive and the gearbox changes with quiet discretion.

Our Portfolio model was fitted with 20-inch alloy wheels, which detract from the cossetting ride, but few passengers will grumble about their time in the XJ. We drove the car to Cork on the M8 from Dublin (a now brilliant road) and it made it feel like popping down to the local shops. The car was fully-laden, yet there was ample legroom in the rear. Customers can opt for a longer wheelbase version for just €4,895 extra, which is a snip in the grand scheme of a six-figure car.

All XJ models get 19-inch alloy wheels, bi-xenon lights, parking assist, leather upholstery, walnut dash, satellite navigation, dual-zone climate control and the interactive touch-screen. You can have this spec for €87,090. Our test model, the Portfolio, added pretty much everything else, including massaging seats, adaptive front headlights, four-zone climate control, a heated steering wheel and the Bowers and Wilkins 20-speaker surround sound system. This is a generous amount of equipment for the money, despite the large price tag. You don't get a car this well-appointed from Mercedes-Benz, BMW or Audi for the same price.

It has been a remarkable few days in the Jaguar because so many people have stopped to stare at it and also wanted to talk about it. It is an amazing looking vehicle. I'd be a little concerned by how temperamental the touch-screen system is and the satellite navigation is a little on the fiddly side, but overall this is a really impressive luxury car.