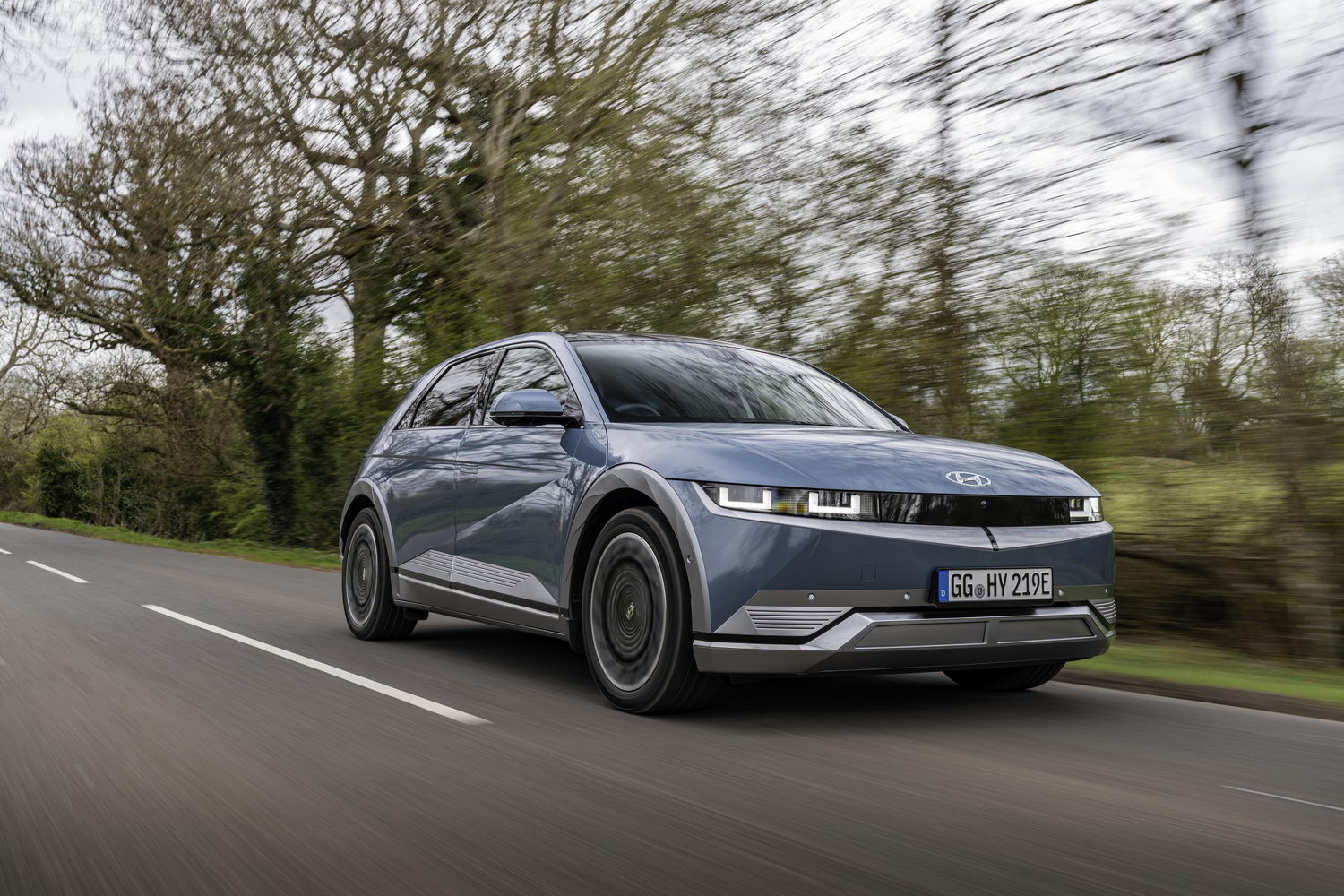 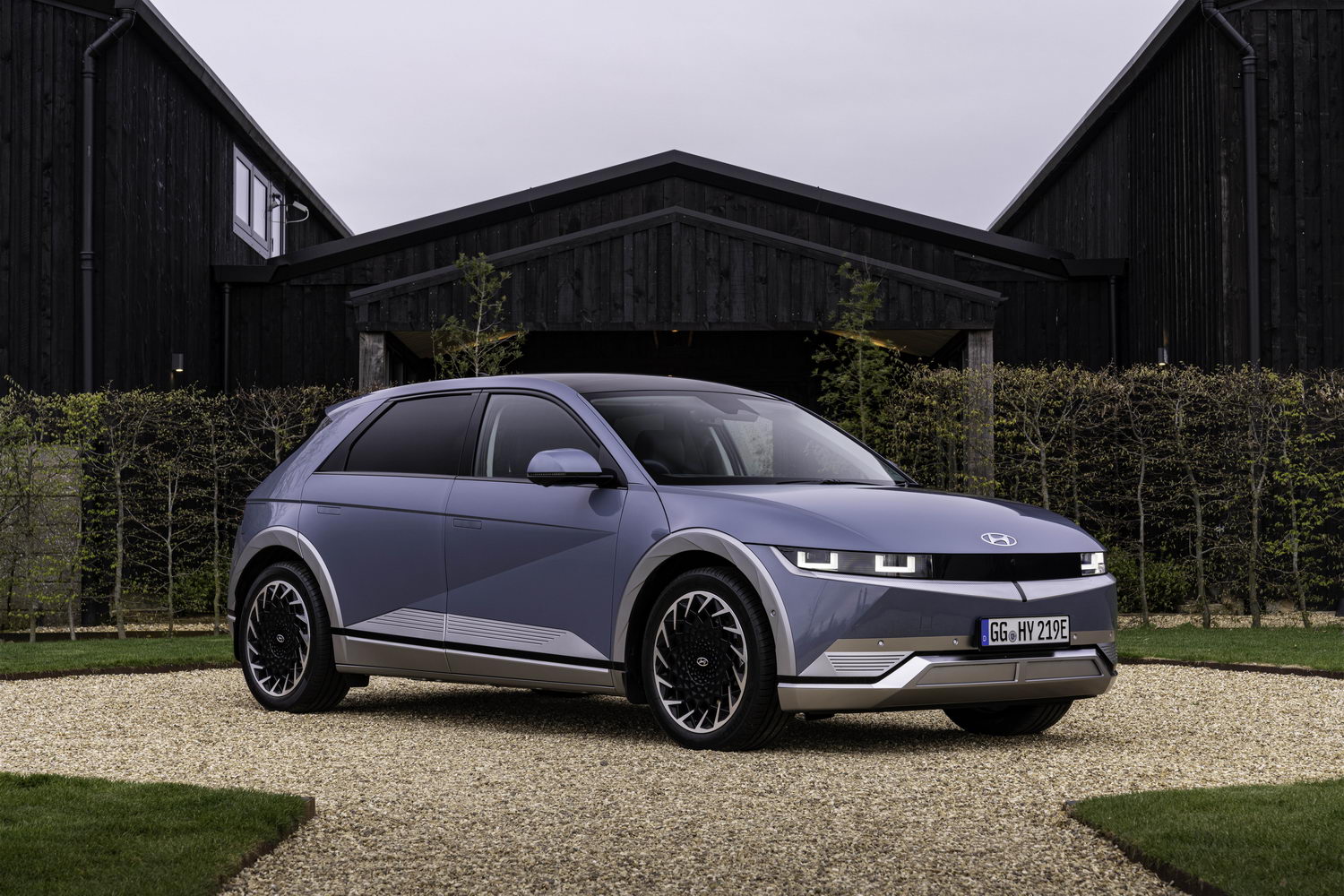 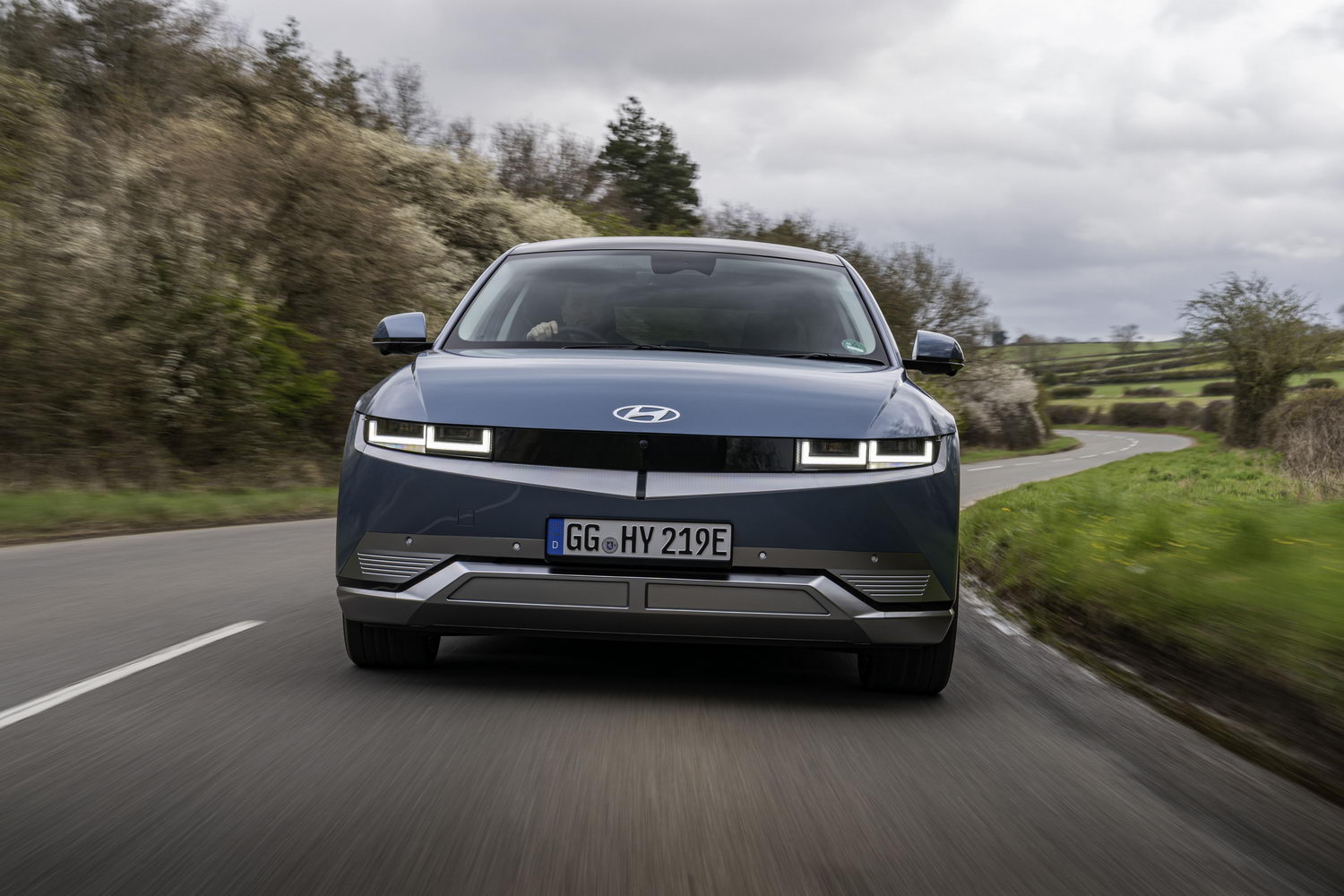 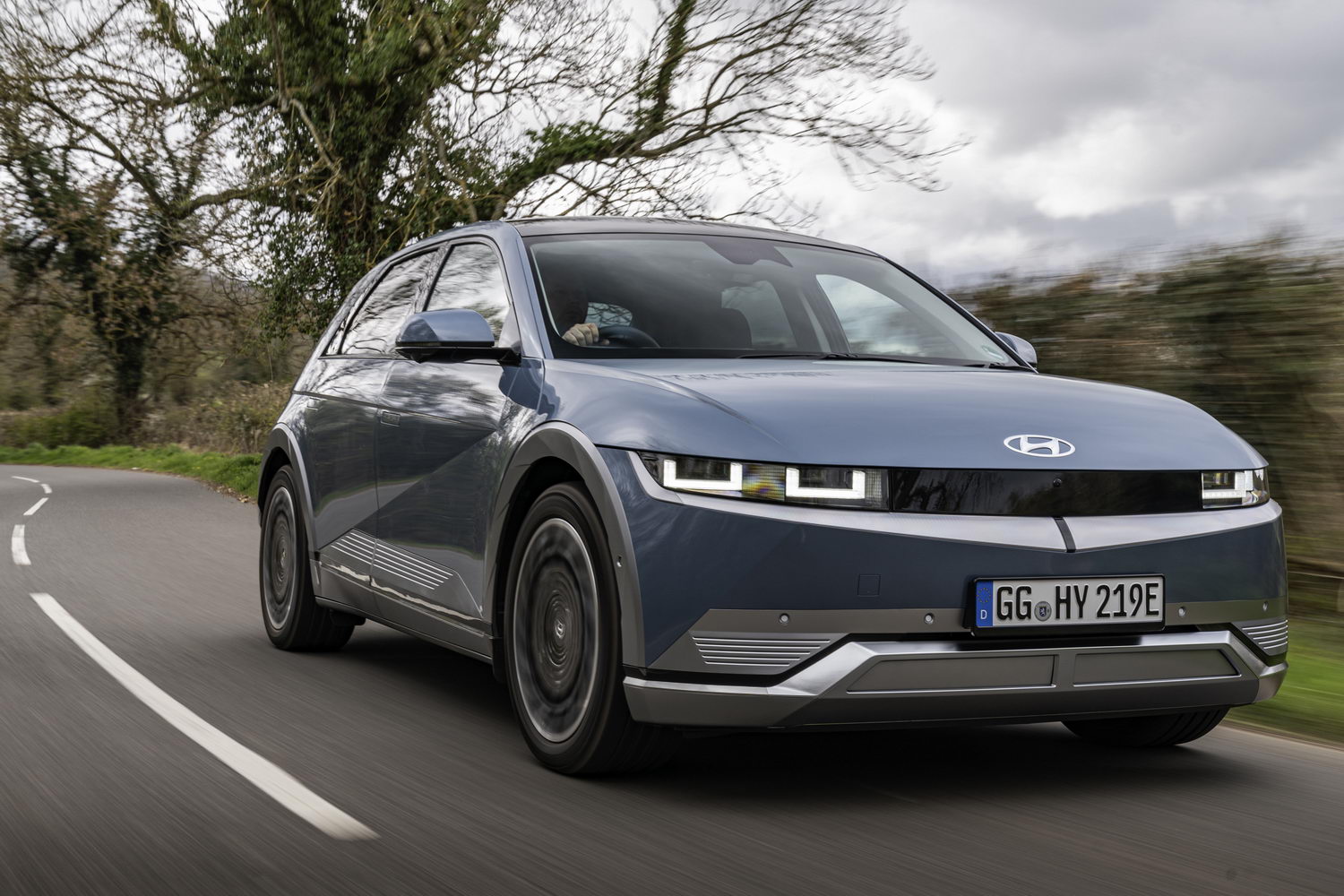 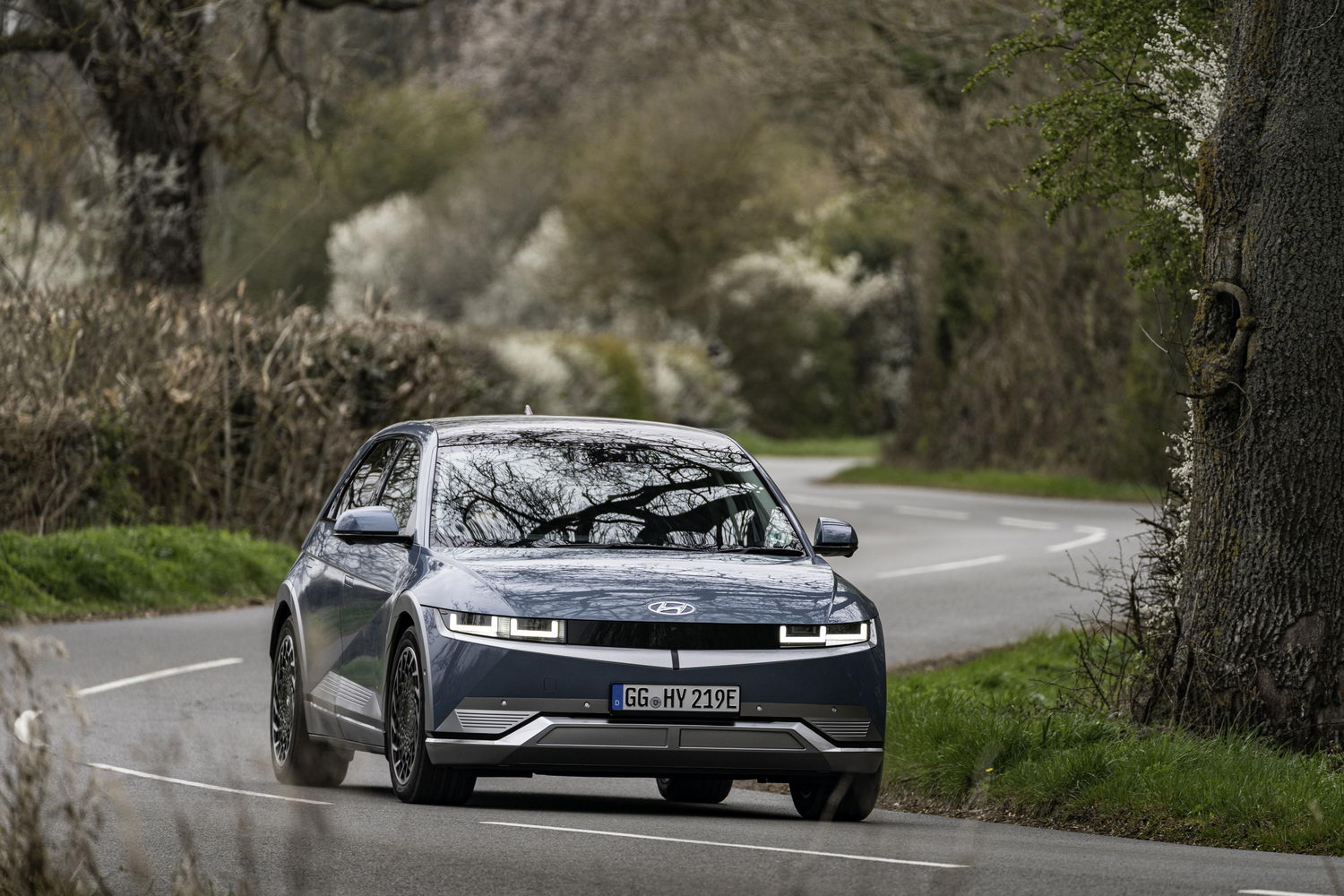 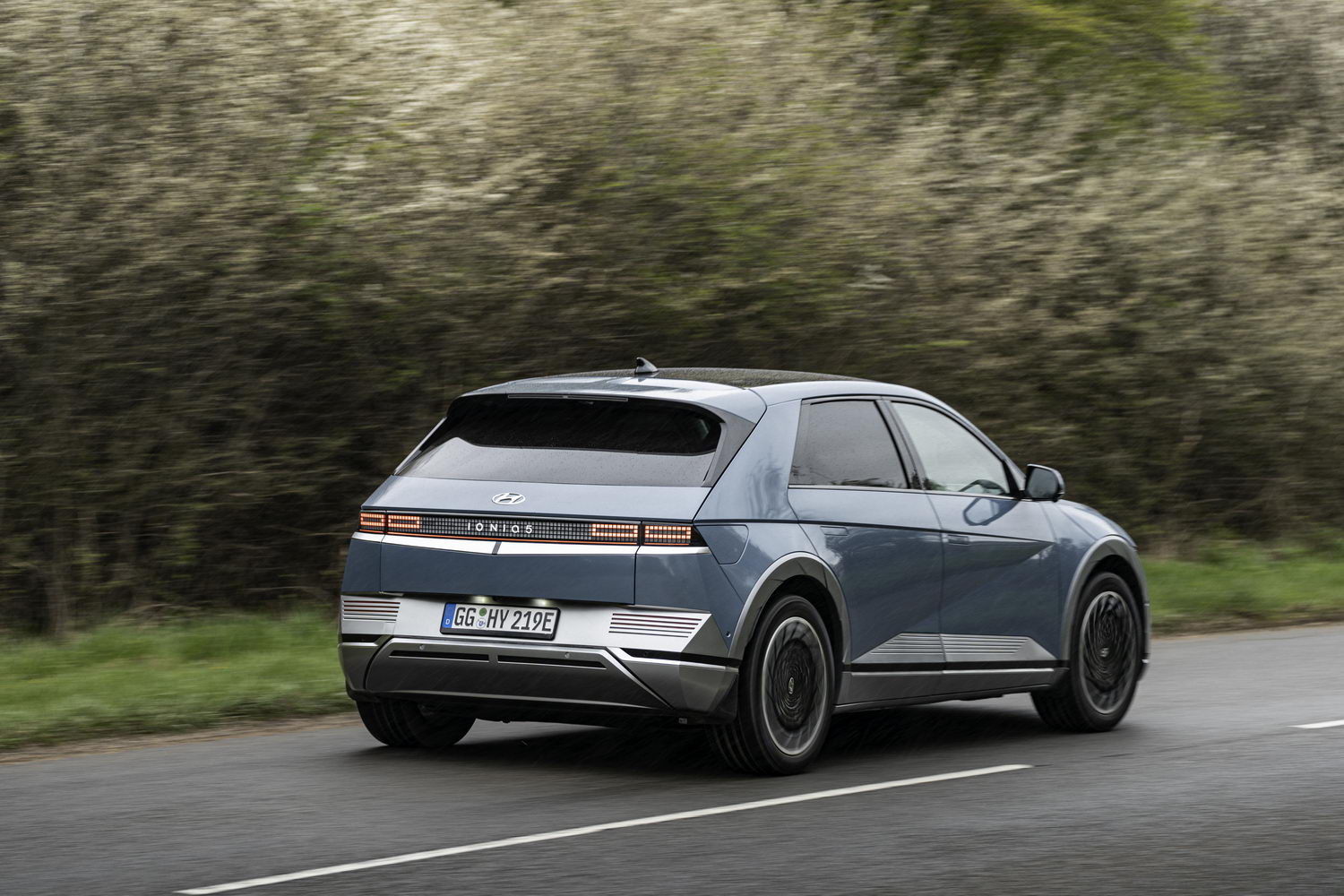 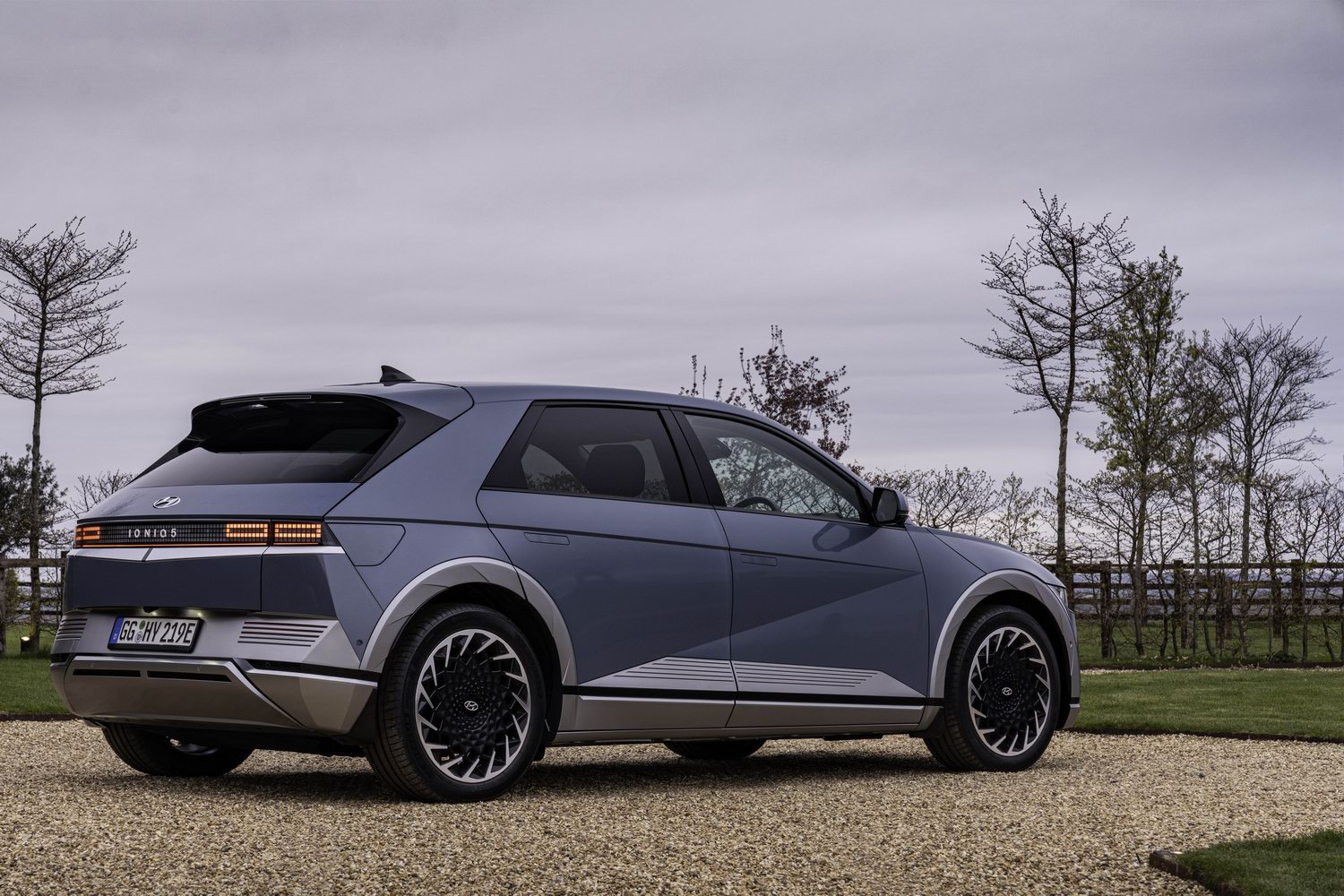 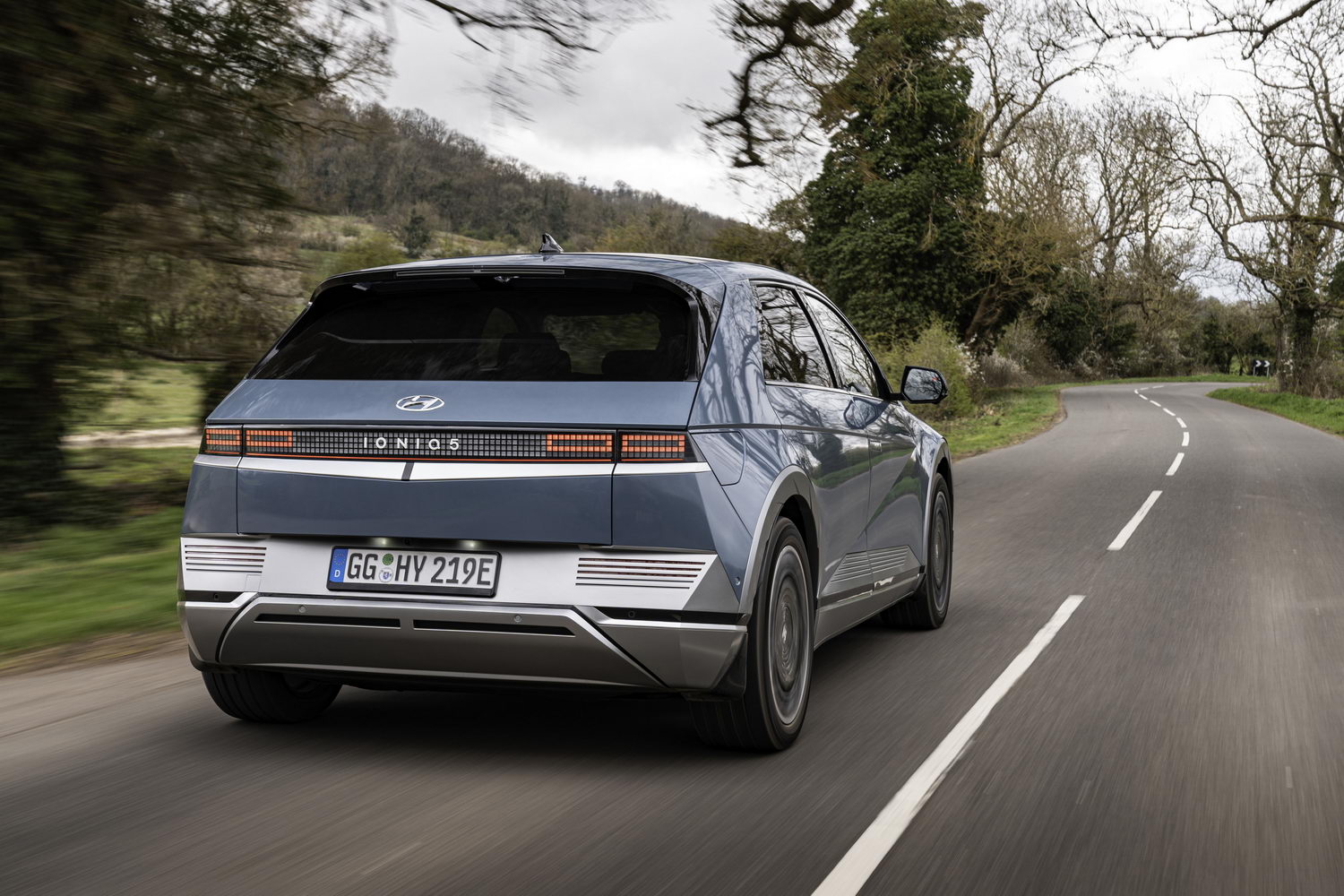 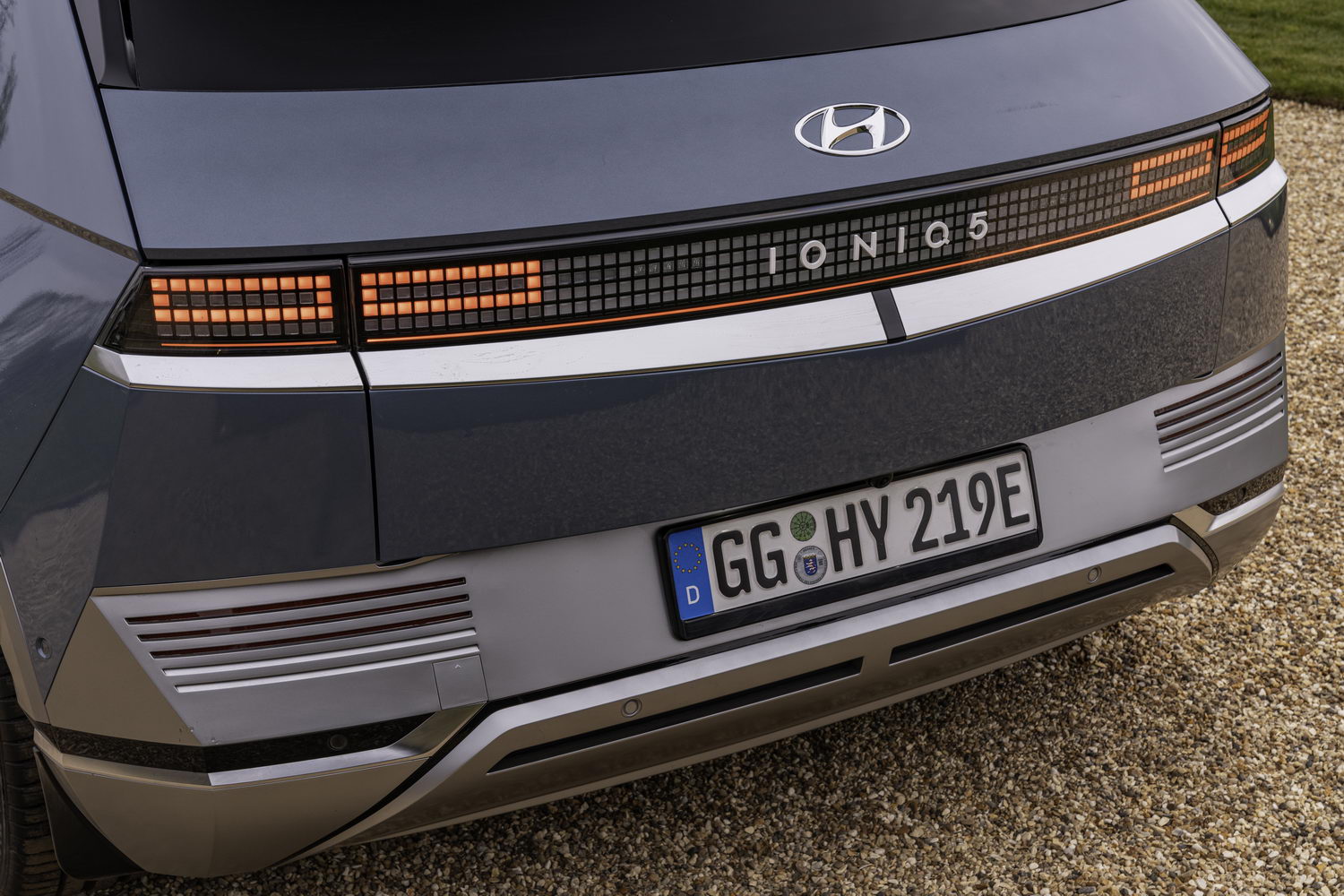 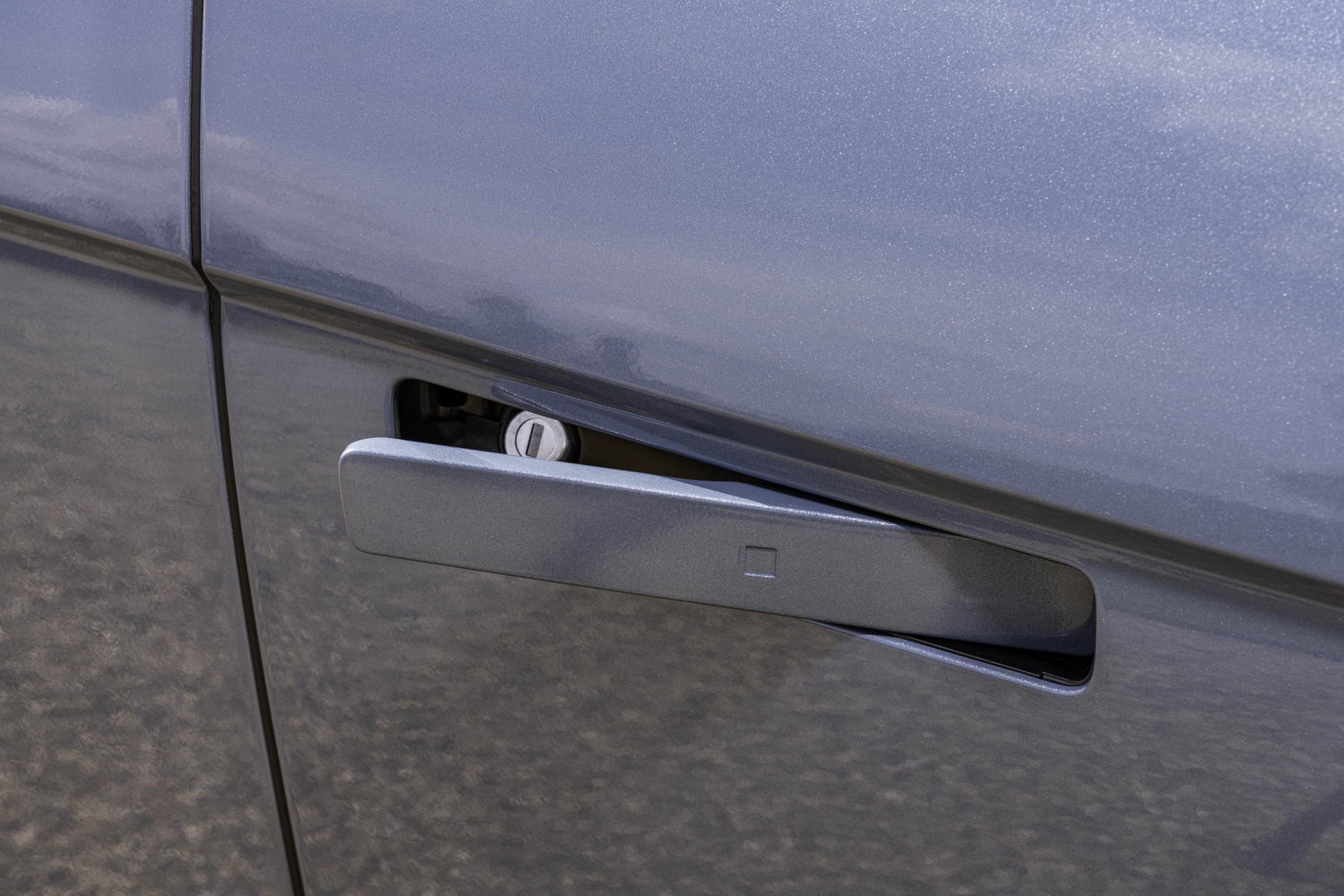 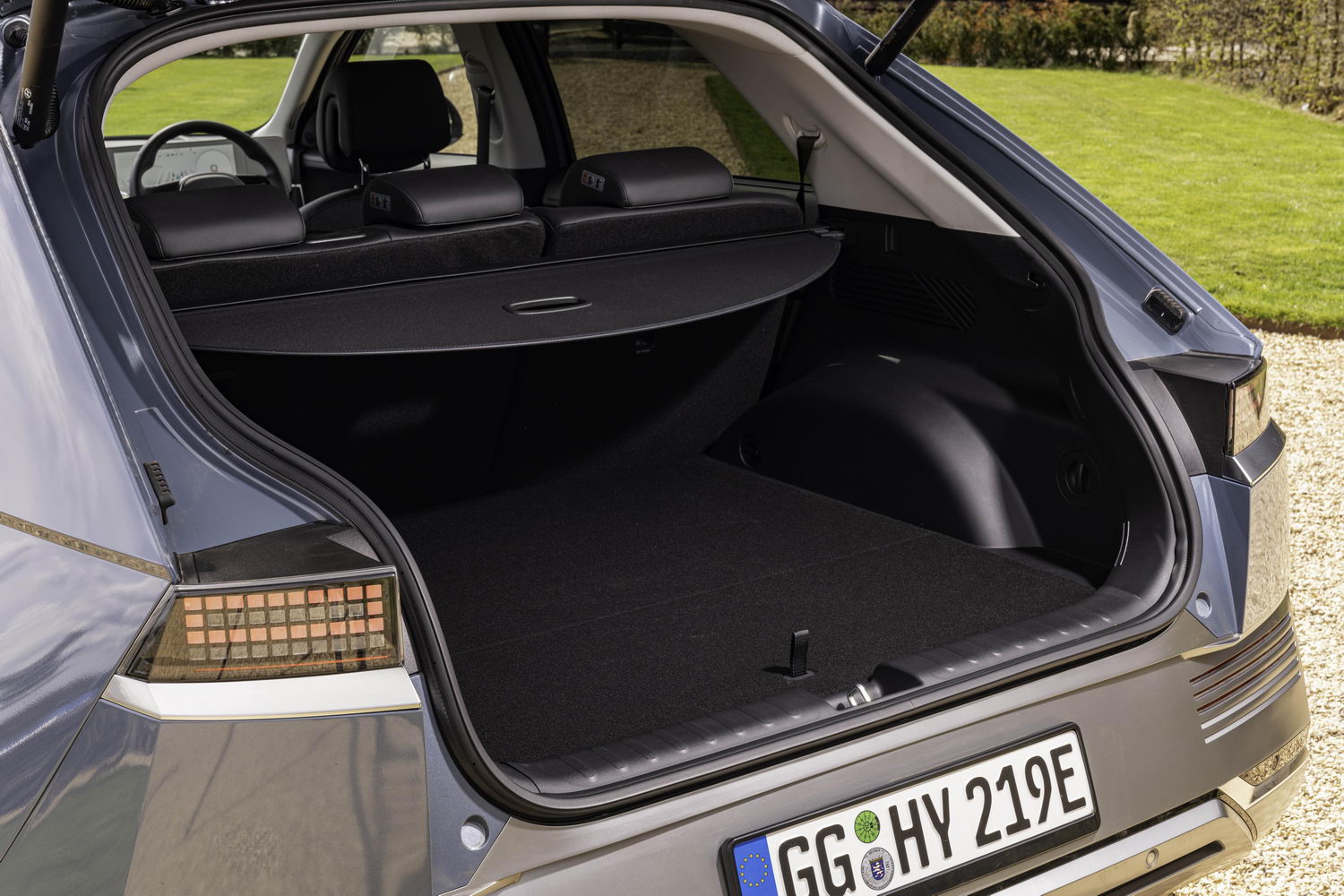 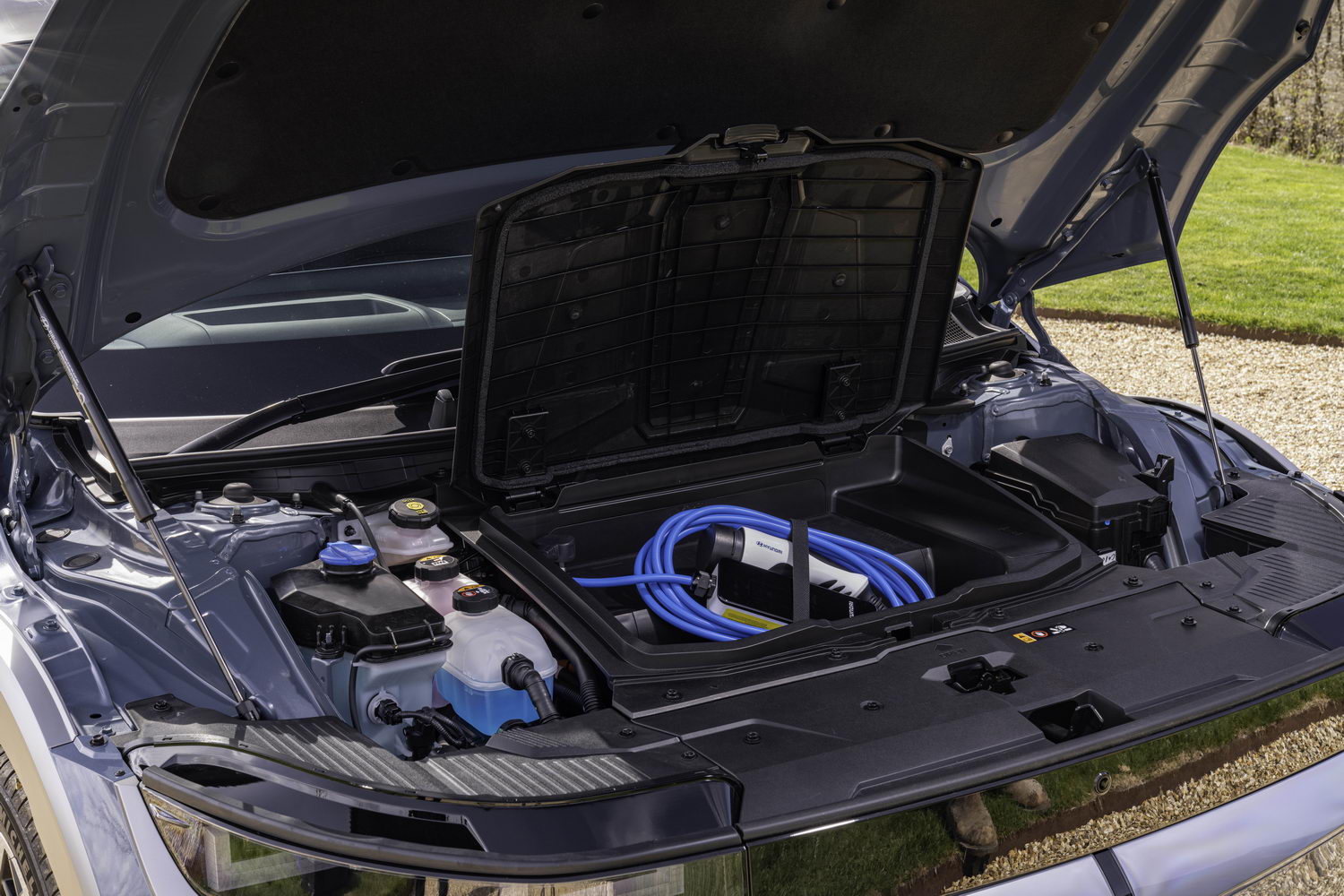 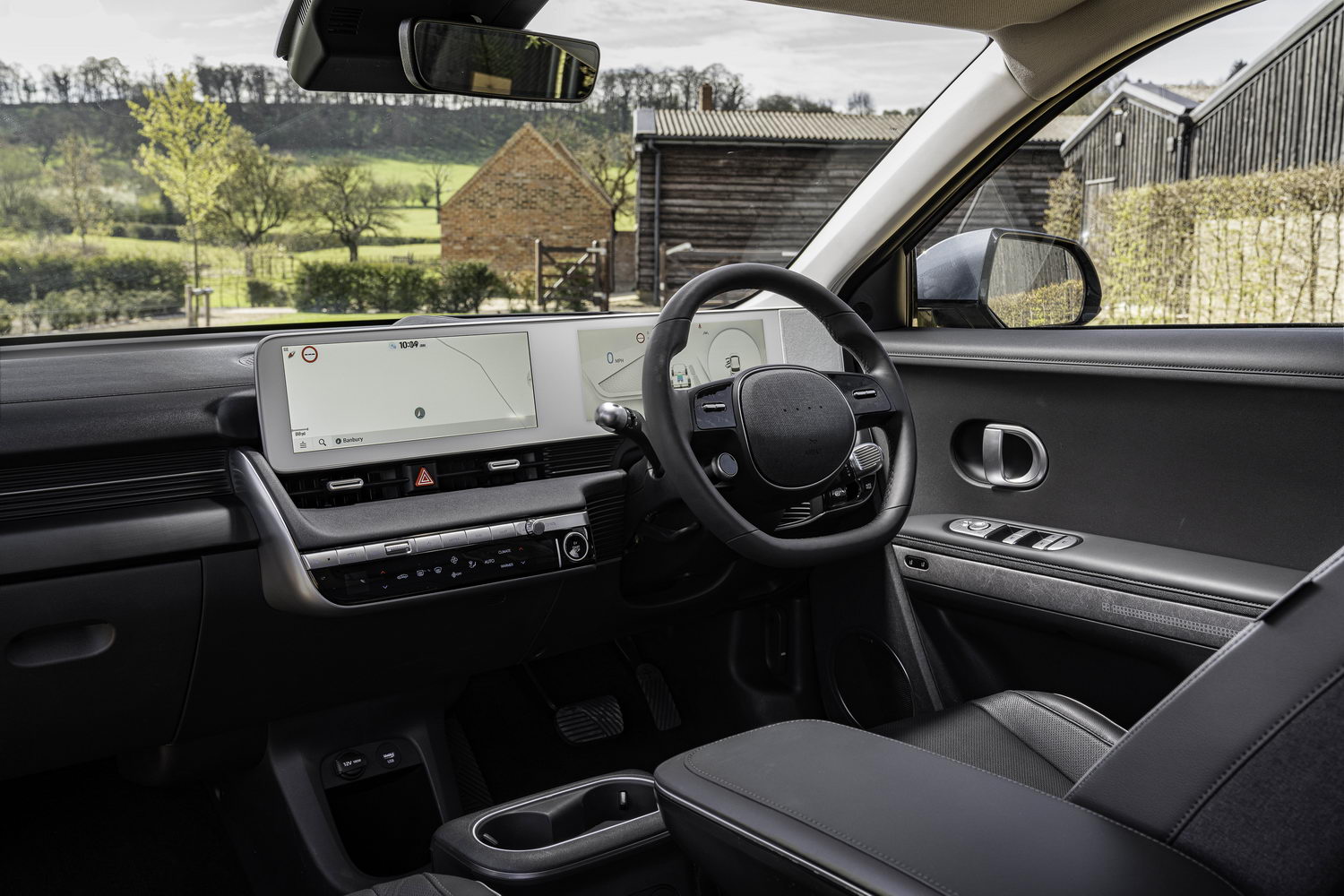 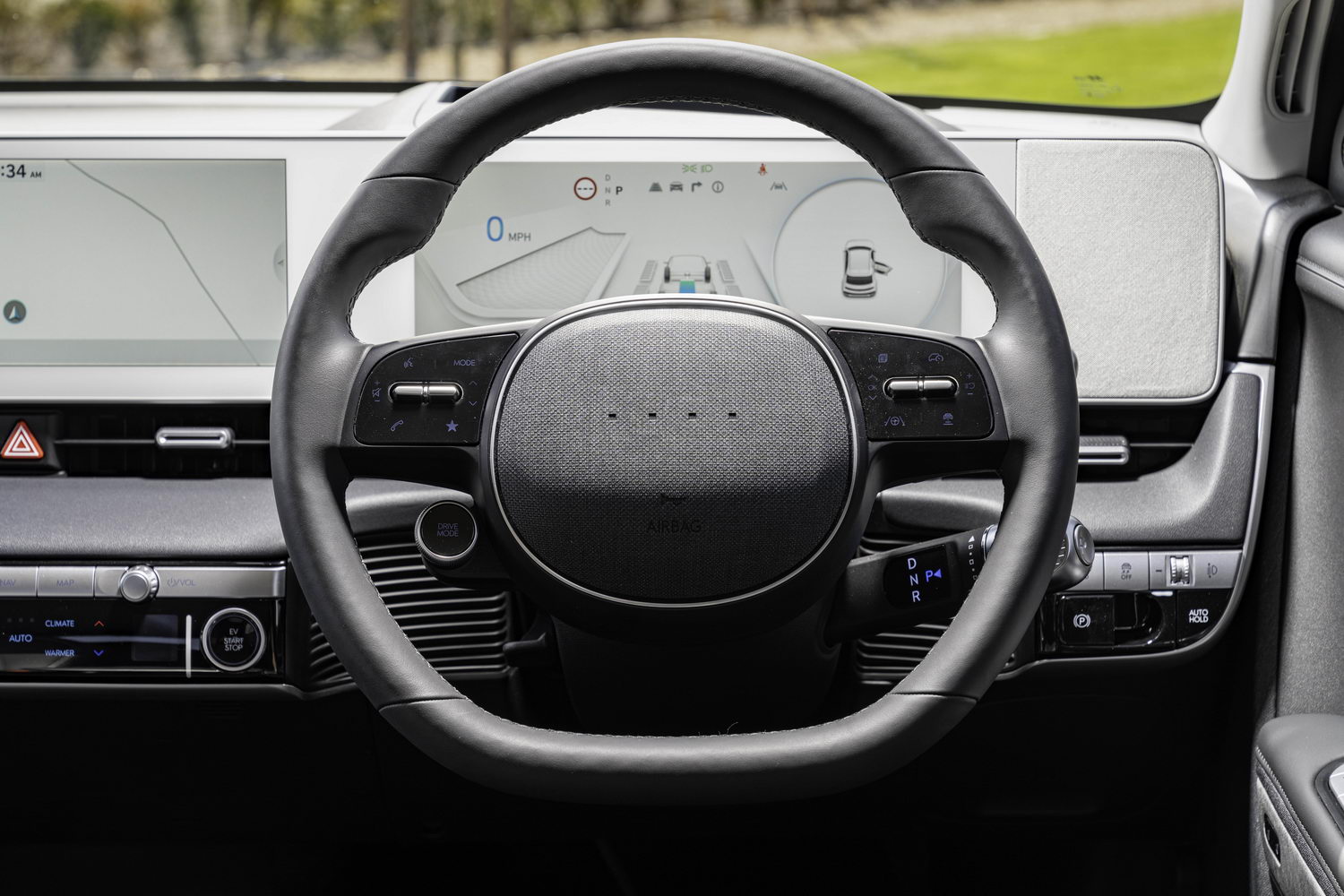 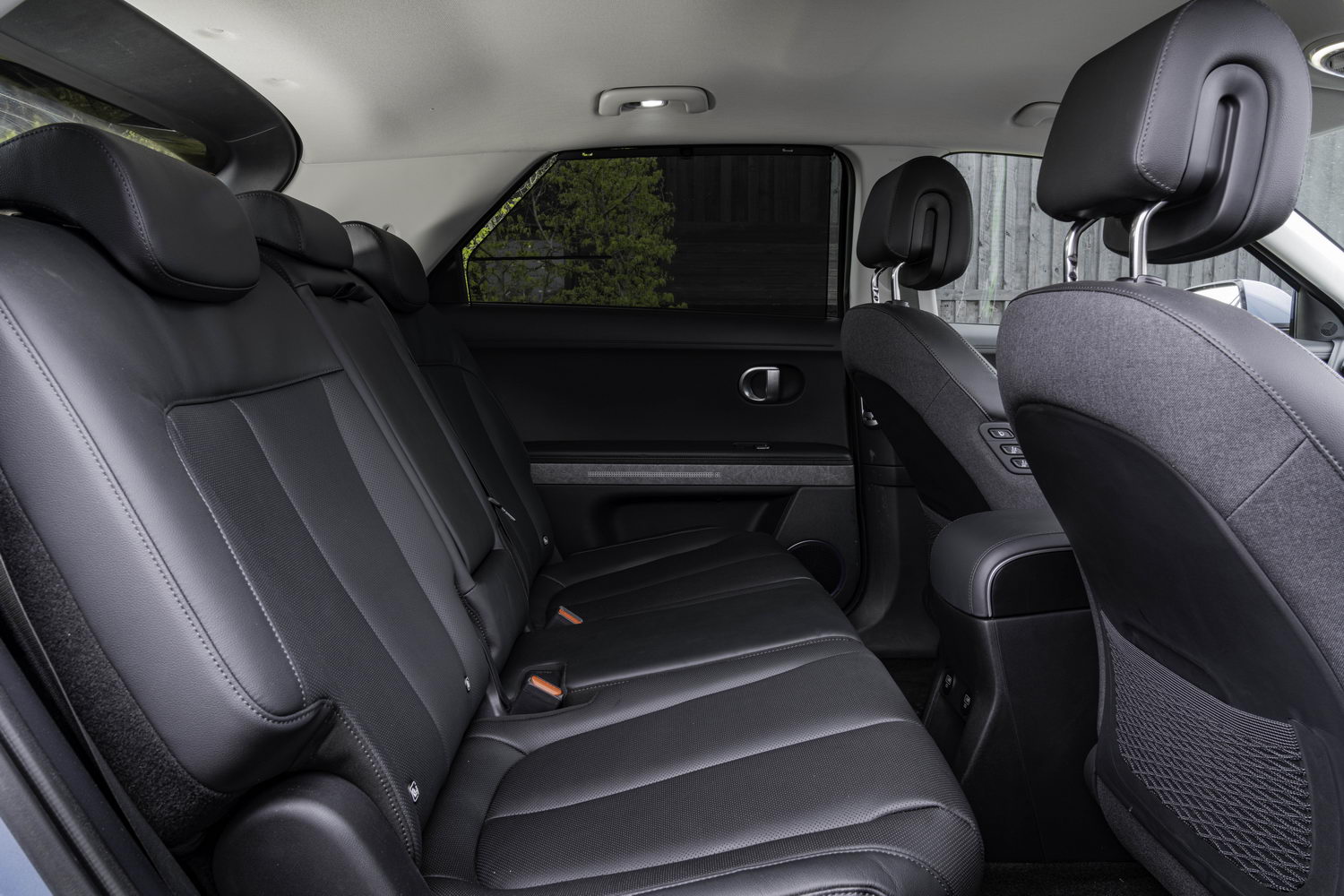 Conventional, the Hyundai Ioniq 5 electric car is not, but it's undeniably brilliant.

The Hyundai Kona Electric moved the EV game on in Ireland, and it would appear that the Korean company is about to do it all again with the first of a new generation of electric cars, the Ioniq 5. This larger-than-it-looks crossover features high-voltage battery technology to allow super-fast charging and is built on a new dedicated EV platform. Hyundai is openly targeting the Volkswagen ID.4, the best-selling electric car on the Irish market right now, with a wide range of Ioniq 5 models to choose from. Of course, all anyone wants to talk about is the new car's striking design.

Until you see the Ioniq 5 in the metal, and for that matter next to a car you're familiar with, it's difficult to comprehend how big it is. In pictures, the five-door design suggests that it's about the same size as a Hyundai i30 or Volkswagen Golf, but it's much larger than that. The Ioniq 5 is actually a good deal longer and wider than the Hyundai Tucson, while its three-metre wheelbase is a significant 235mm longer than that of the Hyundai Santa Fe. The Ioniq 5 is much lower than either of those, though, so it doesn't look at all like an SUV. In fact, while it's referred to as a crossover, in reality it's just an upscaled hatchback with a little more ground clearance than usual.

The striking design of the Ioniq 5 is as much a talking point as its size, as it looks more like a concept car for a motor show than it does a showroom-ready vehicle. Not everyone will appreciate the daring style, but it's brimming with interesting details. Other than the vaguely retro side profile, the rectangular LED lights at both ends define it, giving it a distinctive appearance day or night.

Those lights are complemented by extravagant surfacing on the sides, a wide clamshell bonnet, lots of contrasting strakes and other details to break up the bodywork and unusual lines in the wheelarches. It's unique, it's as simple as that, though we would suggest that the whole design comes together better when a bright metallic paint colour is chosen. Naturally, the 20-inch wheels pictured here also help the design to come to life.

Remarkably, the interior of the Ioniq 5 nearly upstages the exterior. Indeed, it's likely to be met with more universal approval, as it's less risqué in its design. It does, however, move cabin design forward for Hyundai, retaining the well-oiled precision switchgear and decent ergonomics we've become used to, but adding an extra later of perceived quality and incredible attention to detail. Like the exterior, there's a lot to take in.

Saying that, I don't love the look of the simplified two-spoke steering wheel. It looks a little odd with no branding in the middle. Nonetheless, it feels great to hold and the extra buttons on the spokes are tactile to use, as is the drive mode button, which we'll come back to. Behind the wheel is a pair of good-quality paddles that control the level of brake energy regeneration and, along with the usual indicator and wiper stalks, there's a thick stalk on the right for drive selection.

Ahead of the wheel is a 12-inch digital screen for the instruments, with slight variations in its appearance depending on the selected driving mode. The graphics are clear and ultra-modern. This display is neatly integrated in an off-white housing with what appears to be a speaker nearest the driver's door and another 12-inch screen in the middle of the car.

The latter is a touchscreen and operates with all the intuitiveness and ease-of-use that we've grown accustomed to from Hyundai. Thankfully, the controls for the heating and air conditioning are separate to that. Overall, it looks very slick - and it works just as well.

Depending on specification, the large centre console can slide forward and back, allowing room to get from one front seat to the other, for example, though we're not sure why you'd need that. I guess if there's nobody in the middle rear seat, it gives the front of the cabin an even more spacious feel. Not that it needs it. That centre console (or 'Universal Island' if you speak Hyundai marketing) has loads of space for storage, USB ports and a wireless phone charger, while the glovebox is an extremely useful and spacious sliding drawer - shame it doesn't slide in a more satisfying manner.

That's one of the few gripes we have with the interior quality, though, as it all feels comparable to that of the most expensive cars in Hyundai's range, exceeding expectations and the efforts of many other mass-market brands.

The rear of the cabin is exceedingly comfortable, too, with absolutely loads of legroom and plenty of headroom. The floor is flat as well, so an adult can easily get comfortable in the middle seat. However, the width has clearly been divided up in favour of the outer two seats, and the base is quite sculpted, so we don't think that families will get three child seats in the back of this car, not unless they're particularly slender seats.

Extra boot space can be freed up by sliding the rear seats forward and passengers can also alter the angle of the backrests for comfort. Meanwhile, the rear seat backs fold down to form a flat surface with the main boot floor. Open up the tailgate and the boot doesn't look especially massive, but Hyundai says it carries 527 litres, which is on a par with the likes of the Volkswagen ID.4 etc. Because of the sloping rear hatch, though, the Hyundai is unlikely to carry as much if both cars were loaded to the roof, for example.

Usefully, the Ioniq 5 gets an extra storage area under the nose, referred to as a 'frunk' (front-trunk). It holds 57 litres, which is enough for the charging cables and even a couple of laptop bags on top.

Due to the position of the battery pack under the floor, you do step up slightly into the Ioniq 5, and hence you sit a little higher than in a regular car, but it doesn't really feel like an SUV from behind the wheel. There's a lot of adjustment in the steering wheel and seat and noticeably good visibility out in all directions.

The car defaults to Normal mode, or you can press a big button mounted on the steering wheel to choose Eco for maximum range or Sport for maximum responsiveness. Hold down the button and a traction-optimising Winter setting is selected.

Hyundai has done a great job on the electric powertrain in terms of its refinement. You can just about hear the electric motor at work under hard acceleration, but overall it's incredibly quiet and exceptionally smooth. That's backed up by low road noise and only a whisper of wind noise around the door mirrors when at motorway speed.

The Ioniq 5 isn't quite as heavy as most of the mass-market electric SUVs that have gone on sale already, so even the least powerful version tested here, with up to 170hp, has more-than-adequate performance. It's never startlingly quick, but is pleasantly so.

In terms of the chassis, there's a great compromise between comfort and control. It's not luxury-car smooth and soft over bumps, but neither is it harsh or uncomfortable. Our test drive was in a model wearing 19-inch wheels, so it's possible that those with larger wheels will be a little less comfy. The firmness that is there translates into brilliant body and wheel control, dispelling any suspicion that the Ioniq 5 might drive like a big and heavy SUV. In fact, it's quite a fun car to drive, with good steering, quick responses and even some adjustability in the chassis thanks to the rear-drive set-up.

Our initial drive in the Ioniq 5 did not include an exhaustive electric range test, so we'll have to report back on that at a later date, but we did see average consumption figures of 17-24kWh/100km, which would mean a real-world range - for this 58kWh model - of 250-340km for most people, depending where and how they drive.

The one-pedal driving mode, selected by using the left-hand paddle behind the wheel, aids efficiency and feels quite natural once you get used to not needing the brake pedal itself very often.

Though supply of all variants may be tight to begin with, Hyundai Ireland has seven different versions of the Ioniq 5 listed for sale, ranging from €37,995 (including VRT relief and the SEAI grant) at the entry-level - for the Ioniq 5 Executive using the 58kWh battery - to the high-powered all-wheel-drive Ioniq 5 Premium Plus AWD at the top of the line-up priced at €64,995.

There's a 72.6kWh battery pack as standard in the Premium Plus car (which can be had as a two-wheel-drive version for €53,495). It's 58kWh only for the Executive, while the Ioniq 5 Executive Plus and Premium can be had with either battery.

The specification is notably generous. A key item that Hyundai Ireland is including in the price in all models - other than the single Executive version - is a heat pump, which should greatly enhance efficiency, especially in colder months.

The Executive Plus adds the heat pump, electric adjustment of the driver's seat, half-leather upholstery, privacy glass at the back and the sliding centre console.

Upgrade to Premium and the equipment increases again with full leather upholstery, an extended suite of driver assistance safety technology and a few aesthetic bits and pieces, such as LED lighting for the grille.

The top-spec Premium Plus is the only one to get 20-inch alloys as standard, along with a powered tailgate, heated rear seats, the so-called 'Relaxation Seats' with ventilation for the front, even more safety technology and a head-up display.

In terms of maximum electric range, all cars fitted with the 58kWh battery get an official WLTP range of 384km. Ioniq 5s with the 72.6kWh battery and 19-inch wheels get a 481km range. The range of the Premium Plus model with two-wheel drive is 451km, while the all-wheel-drive version's is 430km. The latter uses an extra electric motor, incidentally, which brings total power output up to 306hp.

It is possible to fit a tow bar to the Ioniq 5 and it can be charged at up to 220kW at a rapid charger.

The Hyundai Ioniq 5 is an astounding creation. It looks like nothing else on the road, has a fantastic interior, is very well-equipped, has a great electric powertrain and even drives well. Some electric SUVs might be better suited to the needs of large families, but the Ioniq 5 is undoubtedly more interesting than them all and big enough for most buyers. Practicalities aside, the Ioniq 5 also manages to be desirable, raising the stock of the Hyundai brand no end. Still want that Tesla? 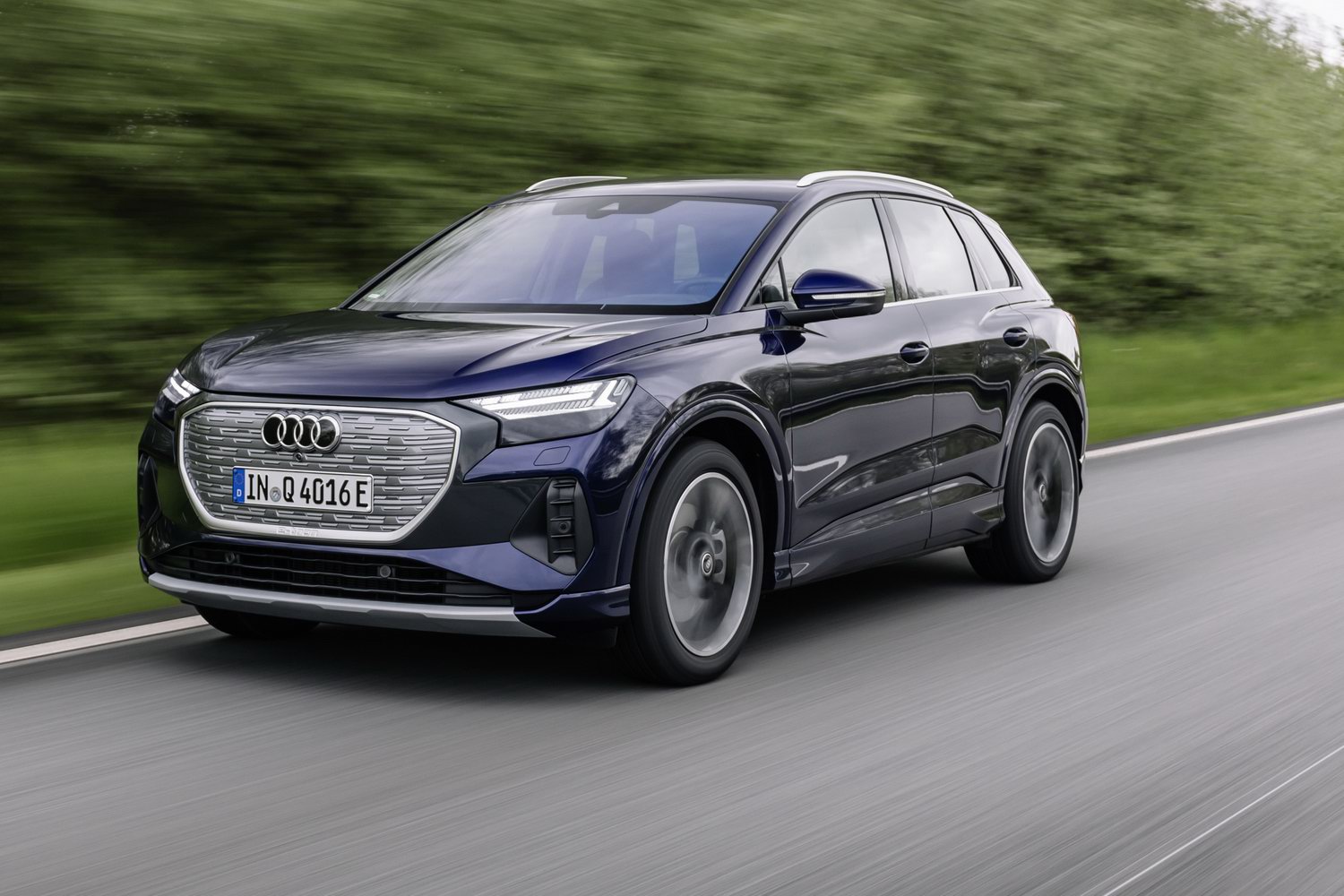 Audi Q4 e-tron 40 (2021) review
Audi Q4 e-tron vs. Hyundai Ioniq 5 58kWh (2021): make no mistake - the Hyundai is premium enough inside to convince people to ditch their Audi; the Ioniq 5 is a better electric car than the Q4 in most respects - if you can see past the badge.

Tesla Model 3 Performance (2020) review
Tesla Model 3 vs. Hyundai Ioniq 5 58kWh (2021): these two are better matched than you might expect, though the Hyundai is better value and immediately feels of higher quality, too. Will be interesting to see how the Model Y compares.

Volkswagen ID.4 1st Edition (2021) review
Volkswagen ID.4 vs. Hyundai Ioniq 5 58kWh (2021): the ID.4 is more conventional looking and a little more practical for families, but the Ioniq 5 has a more impressive cabin and electric powertrain.