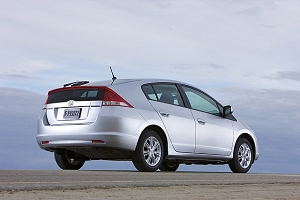 Hands up: I wasn't looking forward to driving the Insight. There aren't all that many hybrids on sale as yet and I've yet to try one that I would give up a conventional car for. Sure, the official economy and emissions figures are low, but so are those of many a decent turbodiesel model - and without the strangeness that seems to be built into hybrids sold to date.

However, the Insight isn't quite as different to a regular car as the Prius is. That's despite an unusual dashboard, a CVT (continuously variable transmission) and a stop-start system.

The seating position is lovely and low like Hondas of old. There's loads of space in any seat and a good-sized boot (if smaller than that in the Prius). Though the dashboard is innovative in ways, and interesting to look at, there are too many hard plastics for our liking. And the steering wheel in our test car is shiny and almost slippery. The more expensive version gains a leather wheel.

There is a light-footed feel to the way the Insight drives, though perhaps a little more weight in the form of sound deadening might have been wise, as the road noise is conspicuous. Maybe it's partly due to the lack of engine noise. It seems to stick at 2,000rpm or lower unless you put your foot down.

At the end of day one the average fuel consumption was 5.4 litres/100km, which is a little shy of the official combined figure of 4.4 litres/100km.

The Honda stayed in town today, though its built in stop-start system wasn't used all that much as the traffic was flowing. It's a quick-acting system and quiet, as it doesn't use a conventional starting motor. In fact, the Insight is a quiet car around town.

Another positive thing I noticed is that the brakes don't have the inconsistent feel found in the Toyota Prius - caused no doubt by the recovery of energy from the car. The Honda's brake pedal feels very similar to a regular car's.

No surprise that the fuel economy worsened though. Today's average was 6.4 litres/100km.

Took the Insight for a longer journey today, including plenty of motorway. It's a little out of its depth in this situation. In particular, refinement suffers. Most conventional cars at the same price point would have much less road and wind noise. The Insight's ride comfort is fine, but it seems to be quite affected by cross winds.

Most people won't appreciate that the gearbox in the Insight is a CVT item instead of a regular automatic. Technically these are very clever, in that the gear ratio is constantly altered to match the driver's requirements with the engine's abilities. In practice many people don't like them, as putting your foot down results in the engine revving out of synch with forward motion. It takes time to get used to, though drivers that spend most of their time in town and care little for speed won't have any issue with it.

Time to bring the Insight back to Honda. I'm not going to lie to you and say I'll miss it, but I can see how it might suit certain drivers. It's more conventional to drive than a Prius (and significantly cheaper), it's spacious and different to the norm. Don't expect to save the planet with the fuel economy though, as a good turbodiesel car would deliver the same results more of the time.