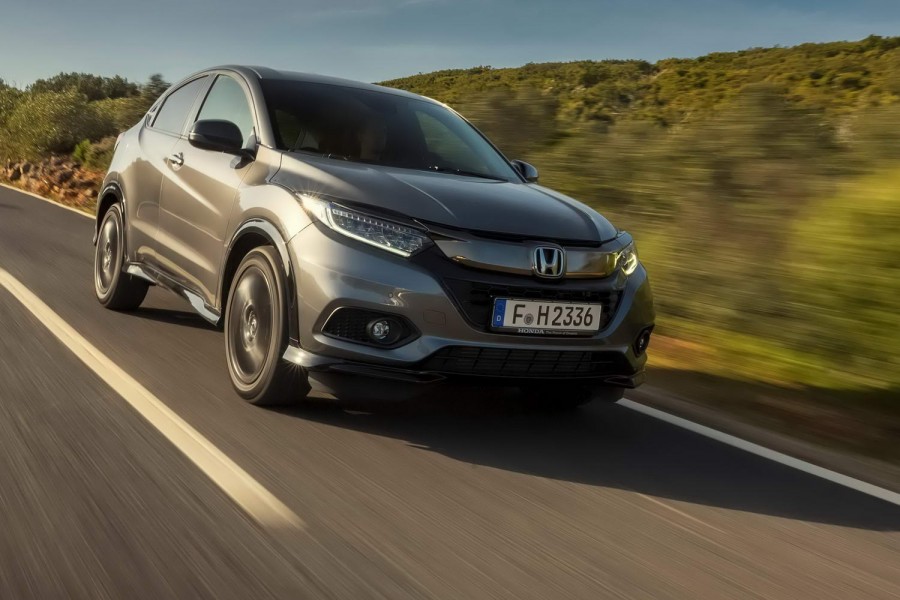 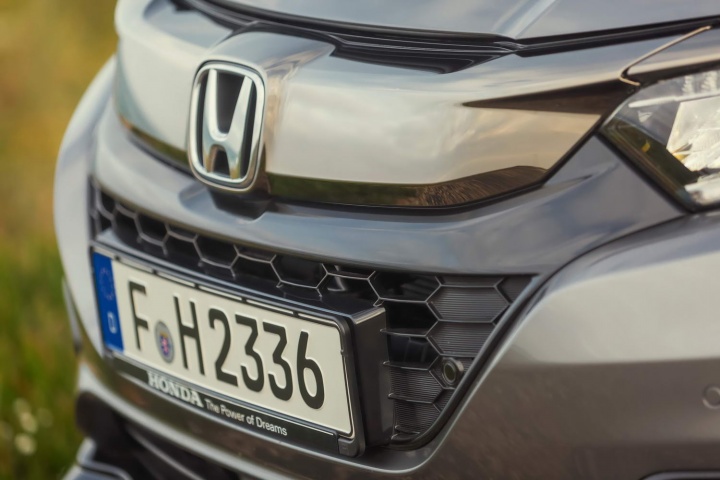 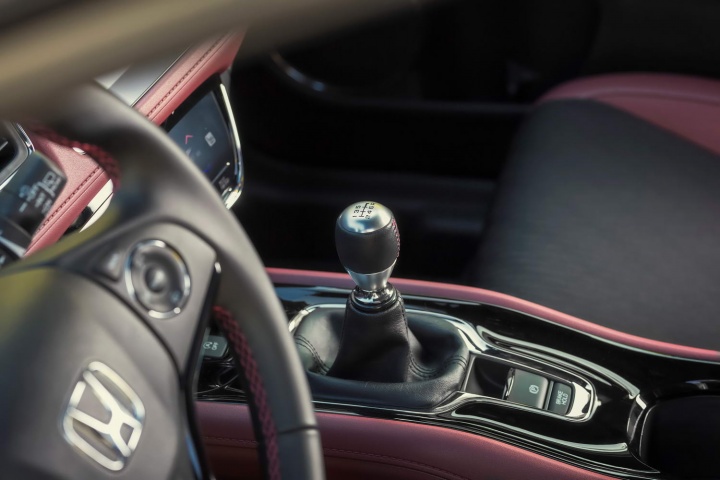 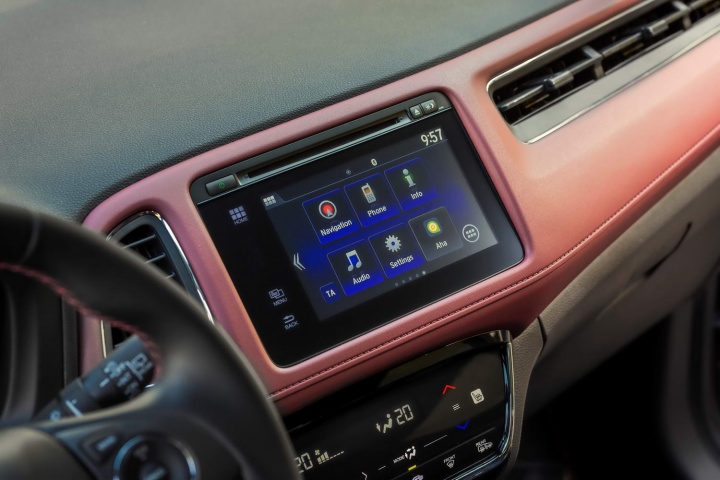 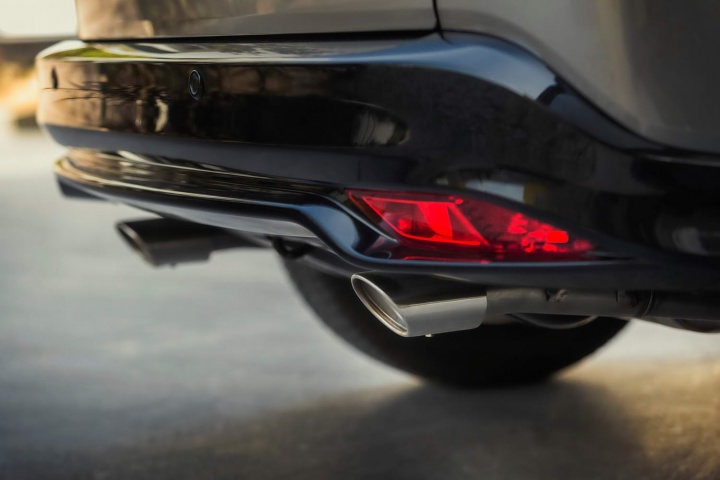 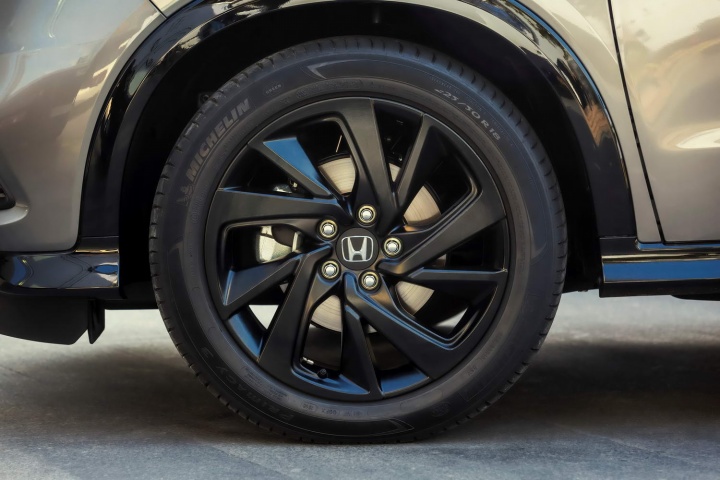 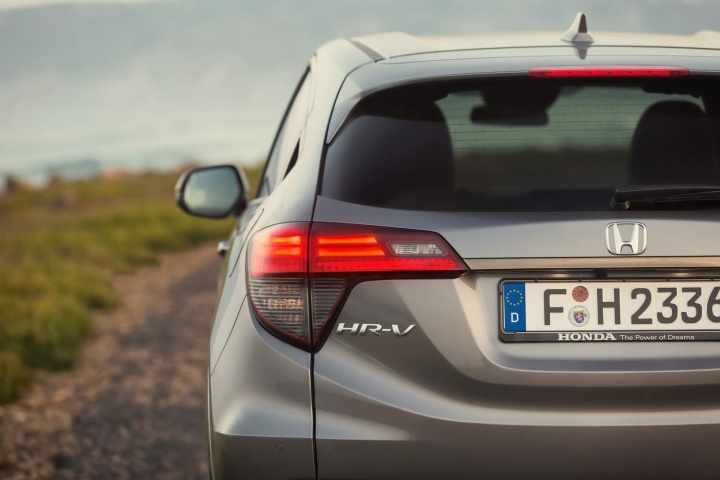 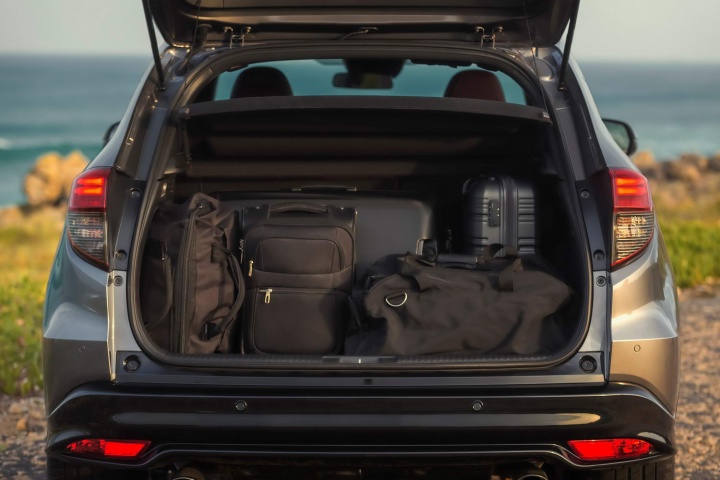 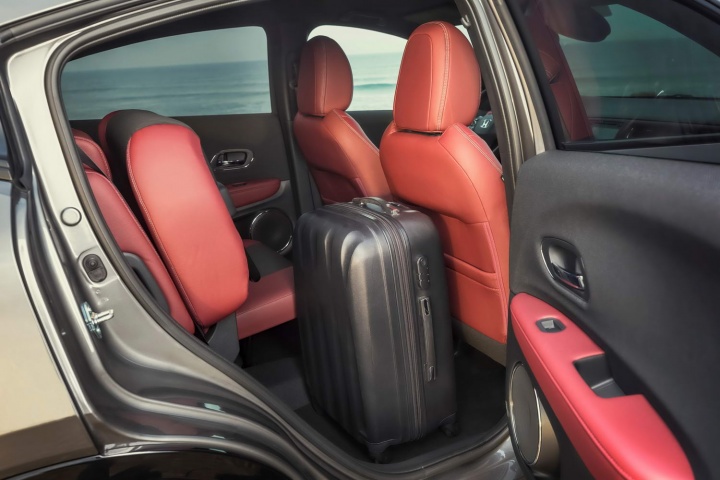 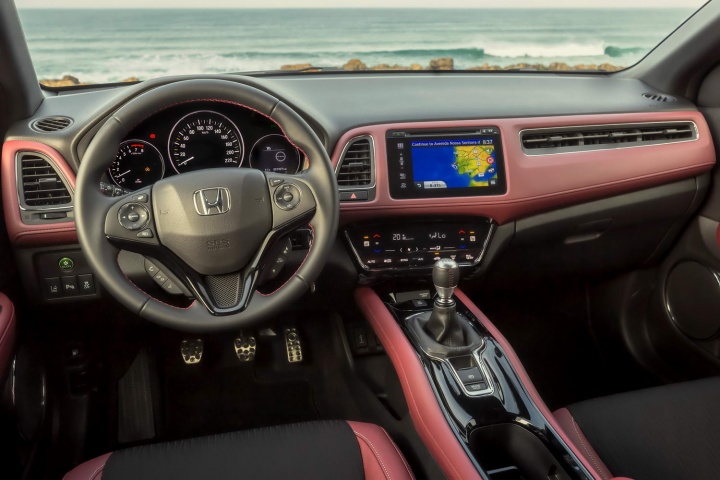 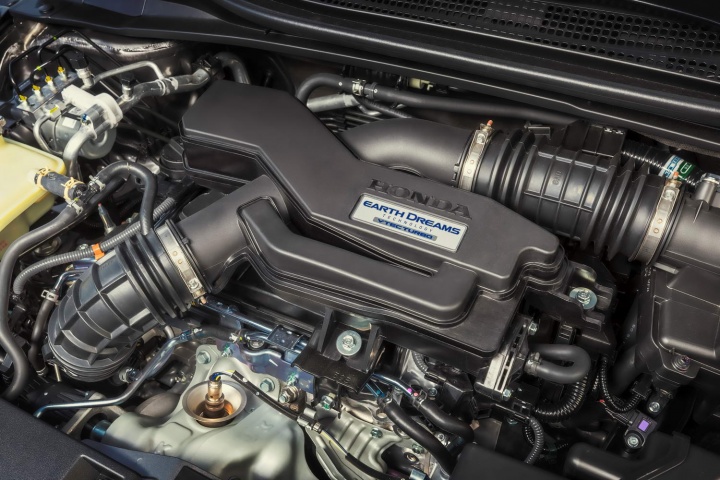 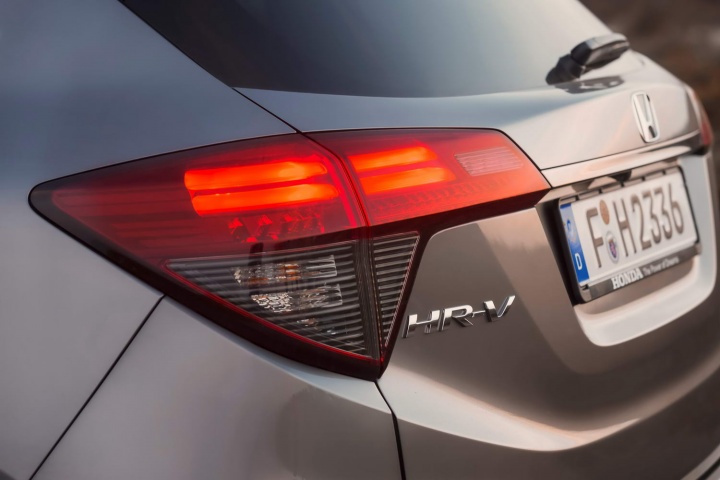 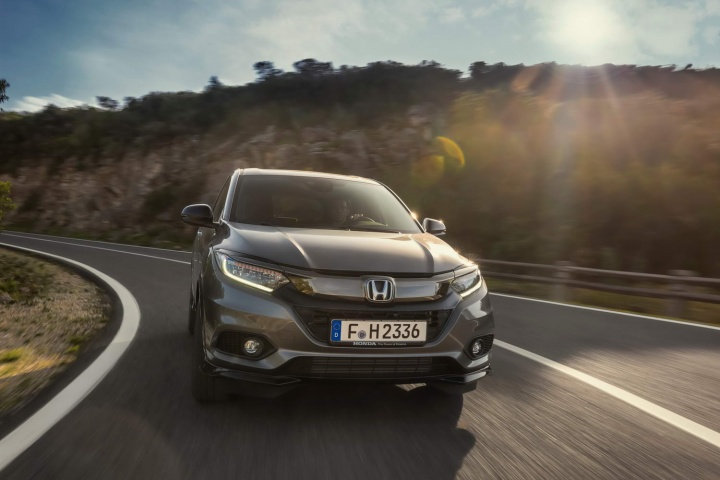 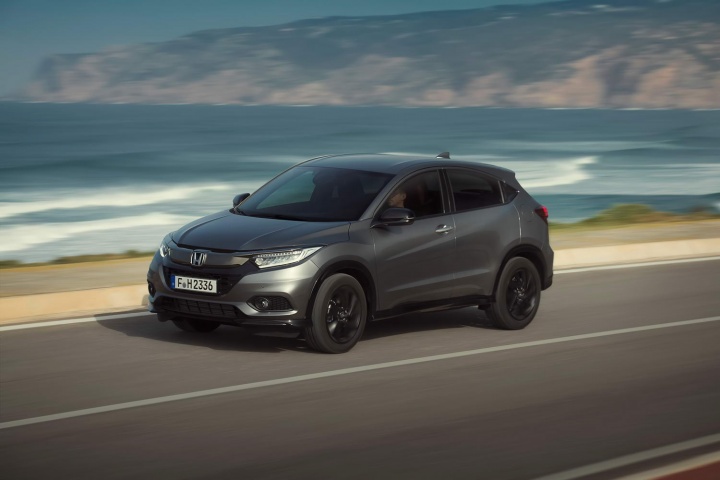 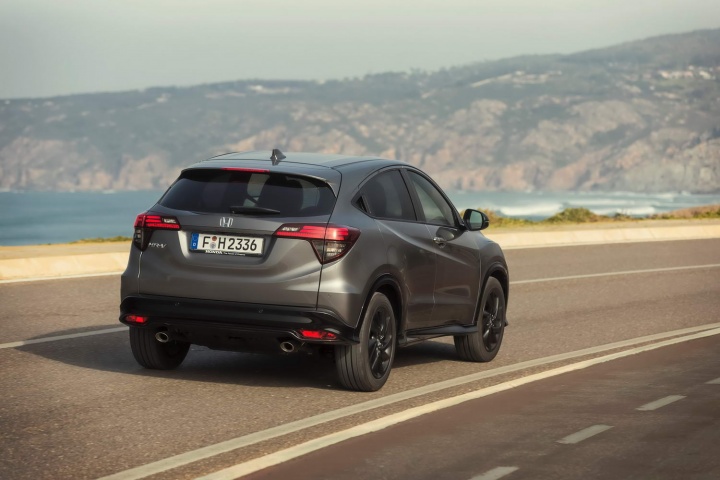 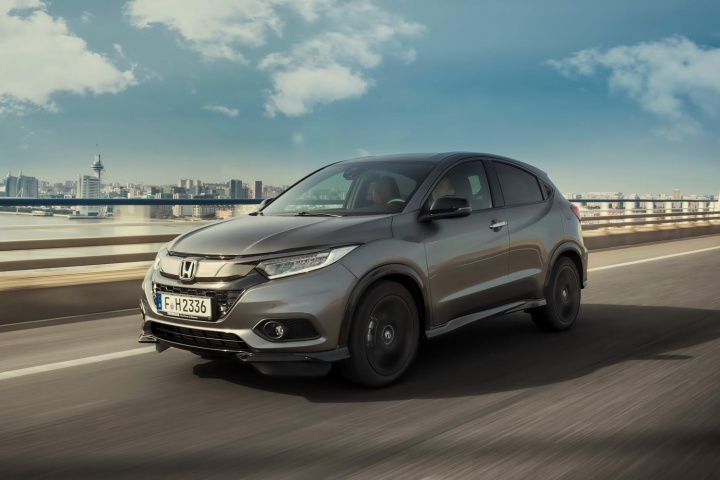 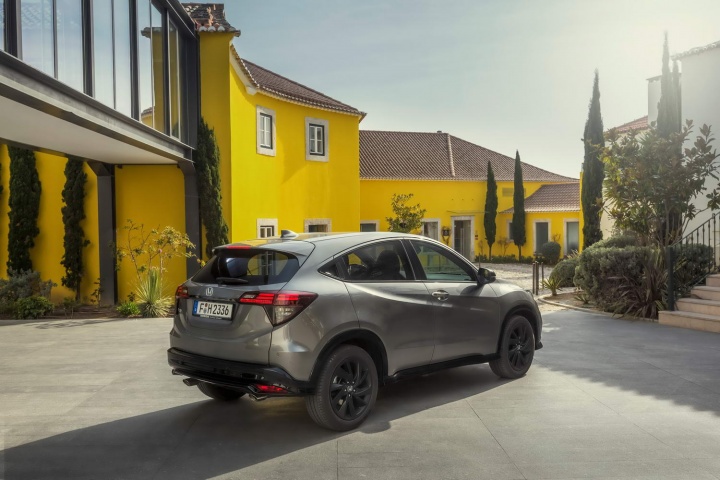 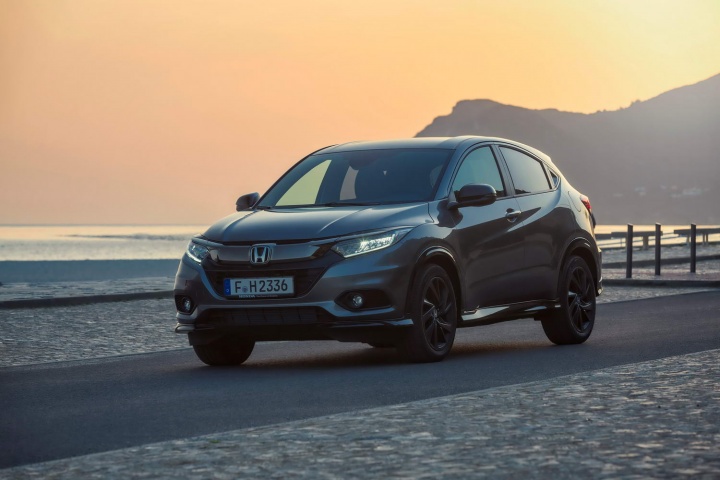 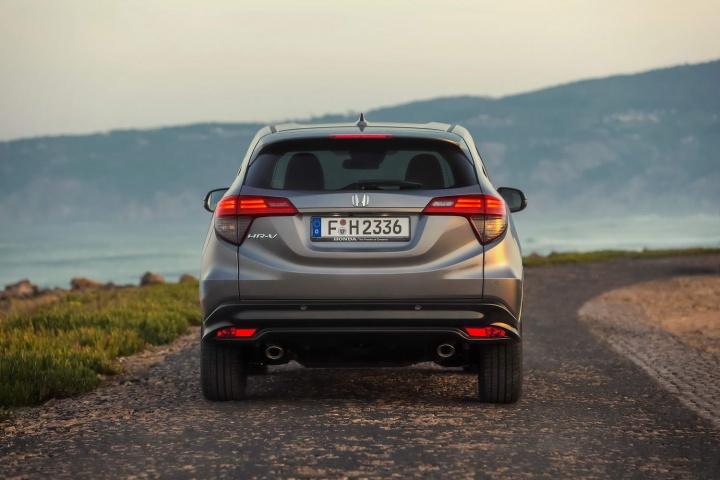 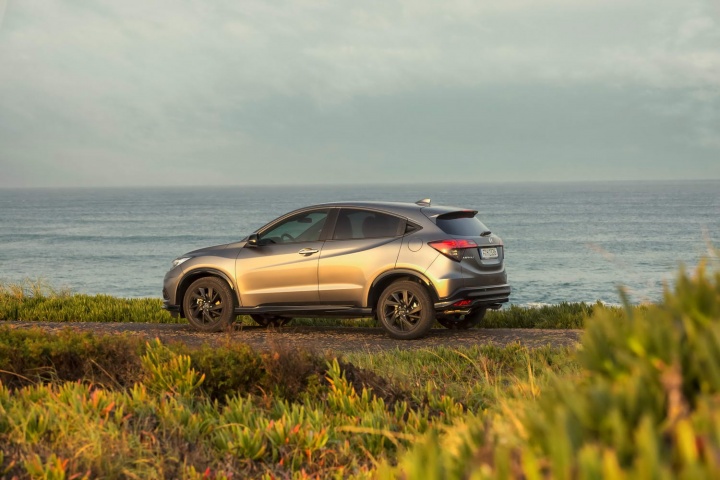 Honda's updated HR-V crossover gains a new flagship - the Sport. Using the 1.5-litre VTEC Turbo petrol engine, as otherwise employed in the Civic, what you have here is a car that perhaps nobody really needs, but we think quite a few people should want. It's superb.

All 2019 model year Honda HR-Vs have been facelifted with the latest 'solid wing' face and refreshed light clusters at the rear, but the Sport - taking its riffs from the Civic Sport with the same engine, as well as the Jazz Dynamic a little lower down the family tree - gains further visual addenda to mark it out as the fresh range-topper. Black detailing, in the main, which you can spot in the form of the front splitter, the side skirts, the wheel-arch mouldings, the honeycomb radiator, the rear bumper and the door mirror caps. The 18-inch alloys are also black, while inside there's a black roof headlining, an alloy and leather gear knob (which is quite a lot like the one you'd find in an S2000), and black cloth for the seats and dashboard, which is offset by dark-red leather highlights - this is employed on the seat bolsters, the dashboard and the door cards. We like the car, both inside and out, although the slightly chintzy chromed-up front of the latest HR-V is perhaps not quite as tasteful as the pre-facelift model.

Honda is going to offer the HR-V Sport in both six-speed manual and also Continuously Variable Transmission (CVT) automatic guises. As in some other Hondas we've seen recently, whichever gearbox you choose alters the engine's power delivery. So while both variants produce 182hp, the manual serves it up 500rpm sooner than the CVT's 6,000rpm point of peak power, while the automatic HR-V Sport also loses 20Nm of torque - its 220Nm maximum spread over a 700rpm-wider band than the manual's 240Nm at 1,900-5,000rpm, with the CVT model's engine hitting peak torque at 1,700rpm and then holding onto it right out to 5,500rpm. Nevertheless, the manual is the quicker HR-V Sport: it'll do 215km/h flat out and 0-100km/h in 7.8 seconds, which compares to the CVT's equivalent data of 200km/h and 8.6 seconds. The manual is also cleaner, with up to 42.2mpg and as little as 151g/km theoretically possible - the CVT posts numbers of 162g/km and 39.8mpg.

We've always really liked the HR-V and the way it drives, and yet the Sport is a marked step up from the regular cars. It has performance dampers mounted behind its front and rear bumpers, which do their best to negate torsional flex in the HR-V Sport's body as it corners. There's Variable Gear Ratio steering, wider and grippier tyres on the 18-inch rims, and a set of Selective Damper Control (SDC) shocks for each of the wheels - these are passive items, so you can't adjust their mannerisms from within the Honda, but with two pistons instead of one, each SDC damper is said to offer the best possible blend between ride comfort and handling agility anyway.

This all works well. Within mere metres of rolling off in the HR-V Sport, you notice the direct, accurate and wonderfully weighted steering, which is more confidence-inspiring than the set-up on a normal HR-V. The ride quality is firm-edged and taut, this being never more apparent than when the 18-inch alloys are asked to traverse a big imperfection in the road surface, but there's none of that relentless fidgeting that you often get in sported-up versions of cars that were never really meant to be sported-up in the first place; instead, the HR-V rides with a comportment and dignity that's most welcome, especially as it's a highly refined car in other regards, with good suppression of exterior noise contributors.

Nothing wrong with the 1.5-litre engine, either. It'll haul from low revs as happily as it will spin out to the redline, just beyond 6,000rpm. There's a decent turn of pace to the car, too, as if it feels a bit stronger than 182hp - even the CVT-equipped Sport felt lively and rapid, although the manual was subjectively punchier. The CVT is also the best of its type we've yet encountered; it mimics upshifts and, because it's linked to a smooth turbocharged four it doesn't even sound bad as it homes in on the redline. In essence, it feels like a decent torque-converter auto from a few years ago, so even though we'd advocate going for the cheaper manual model (see 'What you get for your money', below), the CVT is not something that has to be avoided at all costs.

The manual's sweeter to drive, however, mainly because of its wondrous clunk-click gear shift action. Good spacing of the ratios mean you can either work the gearbox and enjoy the Sport's most potent performance, or surf around on its meaty midrange, both to good effect. The handling is more than up to matching the drivetrain, as well, as there's loads of grip, well-telegraphed understeer (that takes a long time to eventually appear), just a hint of rear-axle adjustability and excellent traction out of tighter corners, which is only partially spun away through an outer front wheel if you turn the traction control off. Throw in a bit of informative lean, which tells you where the ultimate grip levels are, and also the Honda's supple character in dealing with a bumpy road, and what you end up with is an enjoyable, engaging performance crossover that feels very hatchback-like in the way it drives.

We can't mark the HR-V Sport here as yet, as Irish prices and specs have not yet been confirmed. It will be considerably more than the €33,695 that a manual 1.5 VTEC EX (with 130hp) will cost, while we expect the CVT to carry the same €2,000 premium as it does elsewhere in the HR-V range. A reasonably impressive standard specification can be expected, including plenty of driver-assist safety systems and LED lights front and rear, for instance, while the HR-V's practicality is preserved for the Sport - it still has the clever Magic Rear Seats and a whopping 448-litre boot to play with, albeit that's slightly down on the regular models' 470 litres - but we'll update this section as and when we get more information.

There are three main problems with the Honda HR-V, and they are these: one, it'll likely be fairly expensive, once Irish prices are confirmed, and - linked to that - it will be in short supply on these shores; two, the Honda infotainment remains rubbish; and three, you could easily argue that a Honda Civic Sport with the same engine would do much the same job as the HR-V Sport, only better. And for less cash.

The last of these is a valid argument, but these niche-model cars wouldn't appear if there wasn't the customer demand to rationalise them in the first place, and in terms of Honda's execution of the HR-V Sport, it's near enough spot-on. Not too wild, not too lurid and - crucially - not too boring, this is our favourite model of the HR-V range and probably also our favourite B-segment crossover, too. 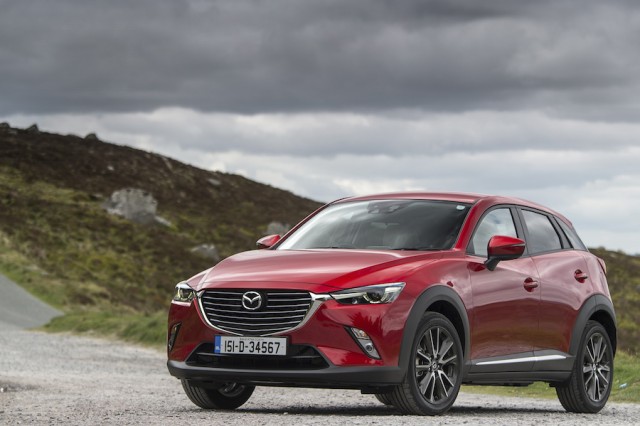 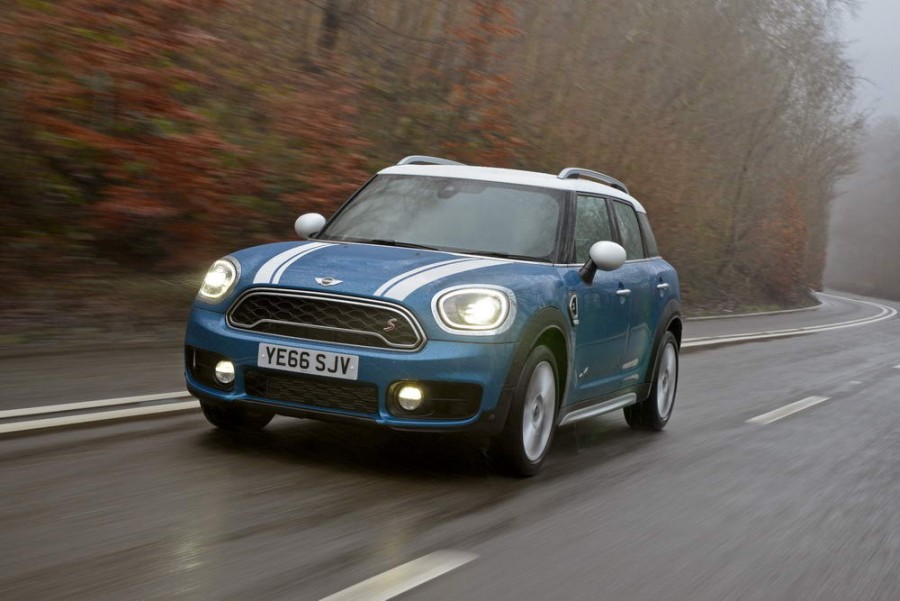 SEAT Arona 1.0 TSI petrol review
SEAT Arona 150 TSI FR Sport vs. Honda HR-V Sport (2019): closest the Spanish model gets to the Honda is as the 1.5-litre 150hp FR Sport. Excellent to drive and look at, although we prefer the HR-V's all-round package.