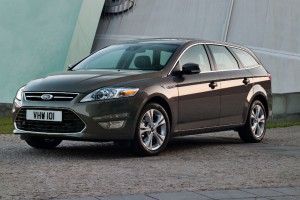 Subtle changes for the latest Mondeo mean it is closer to an executive car than ever before.

The Ford Mondeo is a car that most of us pay attention to for all the wrong reasons. See one in your rear view mirror and you tend to check your speedometer. The staple diet of the Garda Siochana, it has also been a family favourite in Ireland for years. Sales these days aren't as strong as they used to be, with the outgoing model trailing the likes of the Toyota Avensis, Volkswagen Passat and Opel Insignia. This new facelifted version may reverse this.

The changes to the exterior of the Mondeo very much bring it in line with the rest of the fresher models within the Ford range, namely the S-Max and Galaxy - and the soon to be launched C-Max and Focus. Changes that are visible include an enhanced bonnet design, new frontal treatment with a trapezoidal grille, a new front bumper with integrated LED running lights, a chrome strip surrounding the whole glass area, a redesigned boot lid and tailgate and new LED tail lights.

Inside, there is a freshly designed centre console, instrument panel and instrument cluster graphics, new door trim designs with new 'top roll' and flush-fitting integrated door releases. There is also a new LED interior lighting system, something already launched in the S-Max and Galaxy, and a range of new interior colours, graphics and materials available. There is also the option of a new CD/SD navigation system and Premium Sound System.

The standard line is that the Mondeo is the best handling car in the class, and nothing has changed: it has the best chassis in the segment. The 2.0-litre petrol model that we spent the most time in at the European event is of no use to us here in Ireland, where instead Ford Ireland will concentrate on three versions of the 2.0-litre TDCi engine, with outputs of 115-, 140- and 160hp. The 240hp 2.0-litre EcoBoost version we drove is superb, but it won't even be offered in the Irish line-up.

Instead, most buyers will probably opt for the 115hp 2.0-litre diesel, which we haven't tried as yet. It might feel a little off the pace compared to some of the more potent new rivals.

The Mondeo Estate also gets some minor styling revisions and these serve to make the car look more MPV-like.

The revised Ford Mondeo isn't a major overhaul of a car that is starting to lag behind its key rivals, but the segment as a whole has suffered from poor sales. This model remains the best to drive and the new styling revisions keep the look fresh and in line with the new family face. Prices have yet to be confirmed but we do know that they will start at less than €26,000.