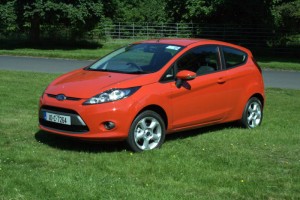 Ford's supermini is a perennial favourite with Irish buyers. We test the entry-level version.

This generation of the Fiesta was introduced in 2008 so it's been a while since I drove it. Familiarising myself with it, at first the interior doesn't impress. Some of the plastics are a little hard and hollow and the front seats are narrow. However, they're comfortable enough, just perhaps not ideal for bigger people.

Despite a compact feeling to the car there's plenty of room for four adults, with rear leg- and headroom not too bad for a three-door model. The front seats tilt and slide out of the way easily too. Children may feel a little claustrophobic in the back though, as the shape of the rear windows means they'll find it hard to see out.

There are several storage areas in the cabin, with loads of space between the seats. However, the only hidden area is the glovebox, which is quite small. The boot is a decent enough size, though like many cars in this class the rear seats don't fold completely flat.

The lack of air conditioning on this entry-level model is all too obvious in the hot weather we're having. Other than that the specification is quite decent, including alloy wheels, a good stereo with aux-in connection and an onboard computer. Though our test car didn't have ESP, it is now standard on all new Fiestas.

After a few kilometres at the wheel it becomes apparent why the Fiesta is such a favourite with buyers. It's very good to drive. The compact steering wheel feels like it's connected directly to the front wheels, refreshingly missing the vagueness found in a lot of the Fiesta's rivals. The gear shift is also a joy to use.

Adding to the experience is a chassis that manages to absorb the worst bumps while giving the driver a feeling of control through the corners. Keener drivers will enjoy its sense of agility and balance.

While the 82hp engine isn't the ideal overtaking partner, it does a fine job the rest of the time in the Fiesta, especially around town. It's not too noisy on the motorway either. Its emissions put it in band B for tax and we averaged 7.8 litres/100km. Most of our driving was in and around Dublin city. The 1.4 TDCi version of the Fiesta sits in band A and should return better economy, though it costs about a grand more.