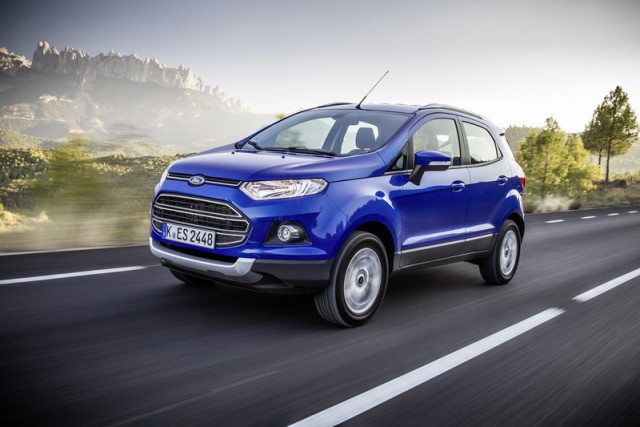 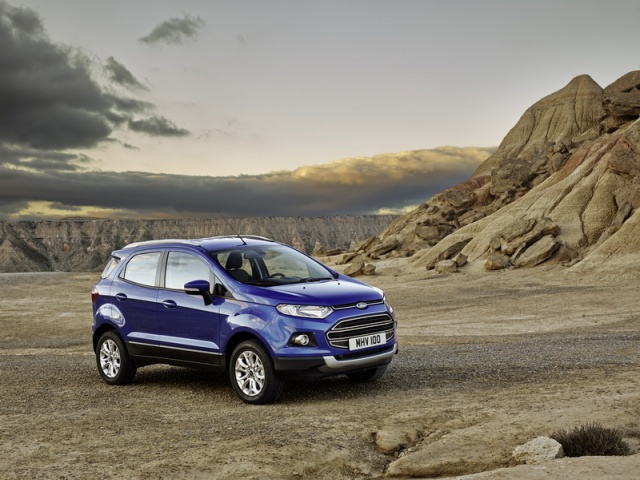 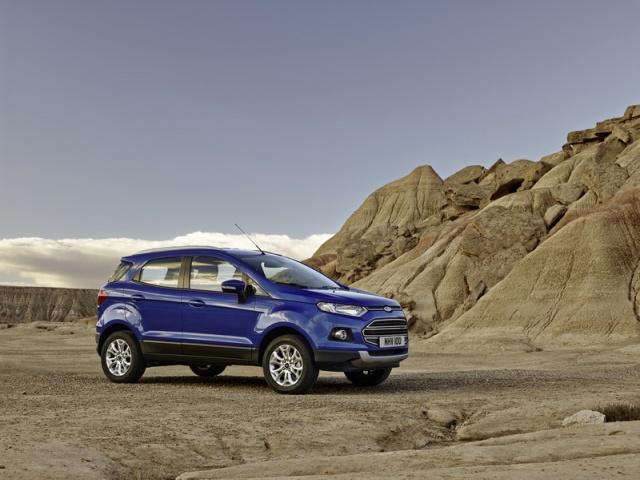 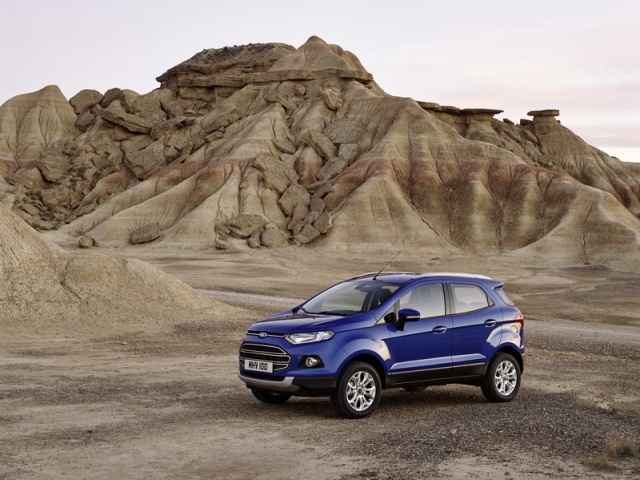 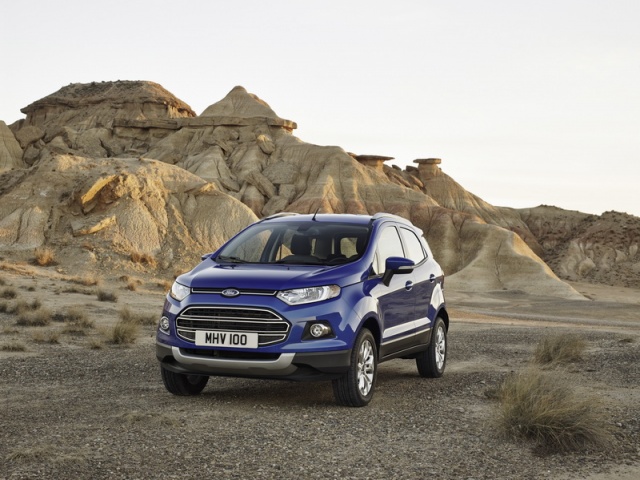 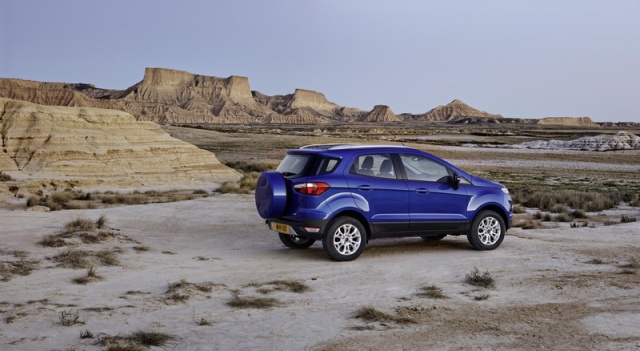 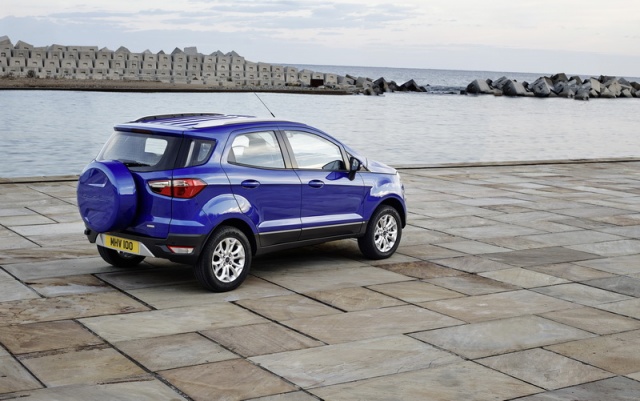 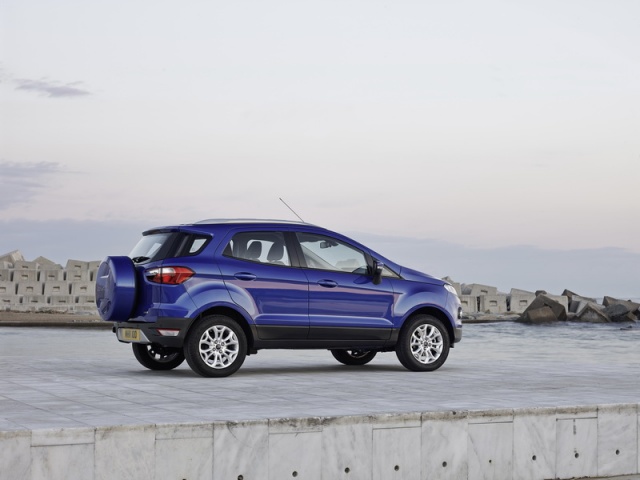 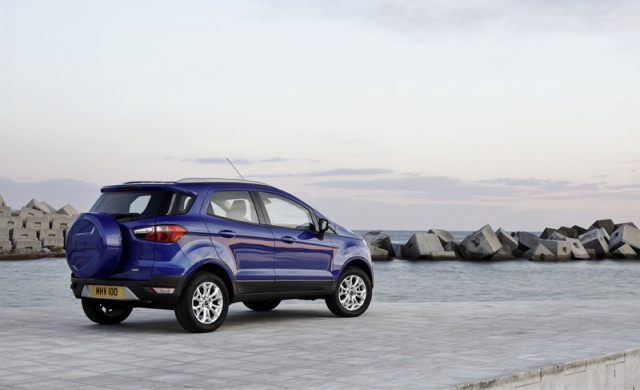 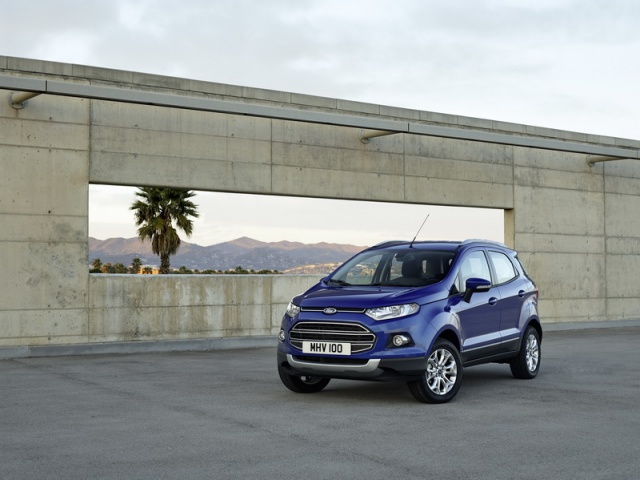 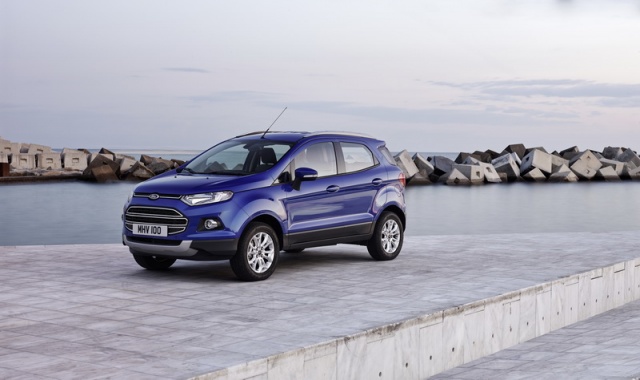 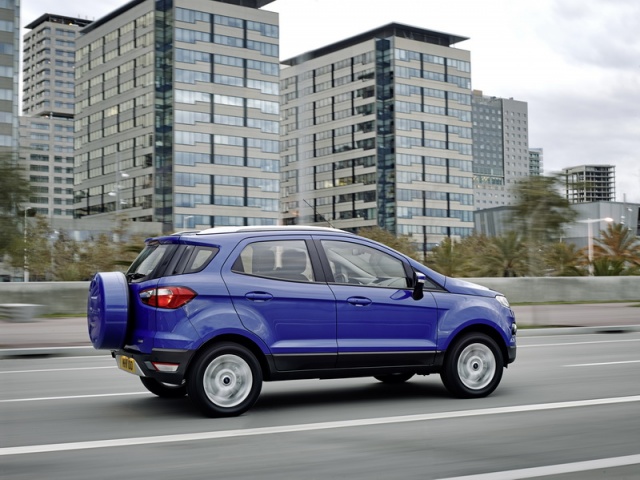 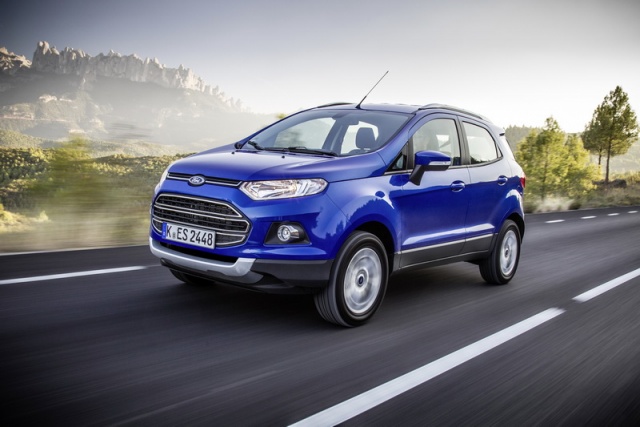 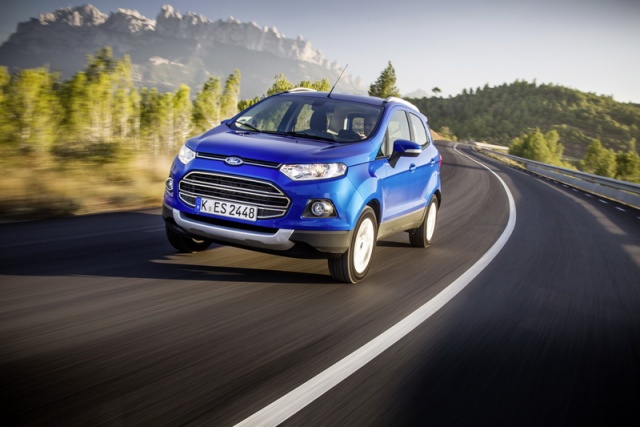 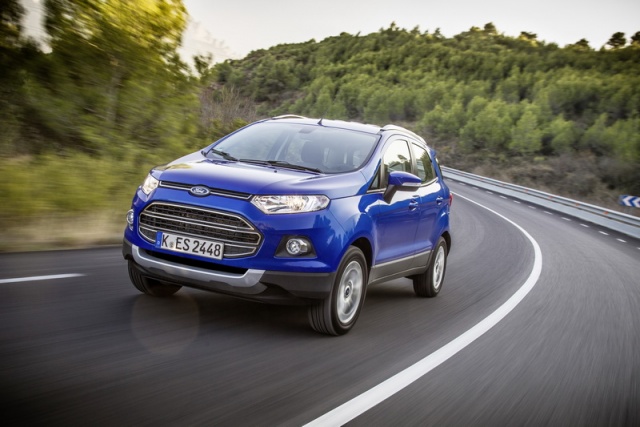 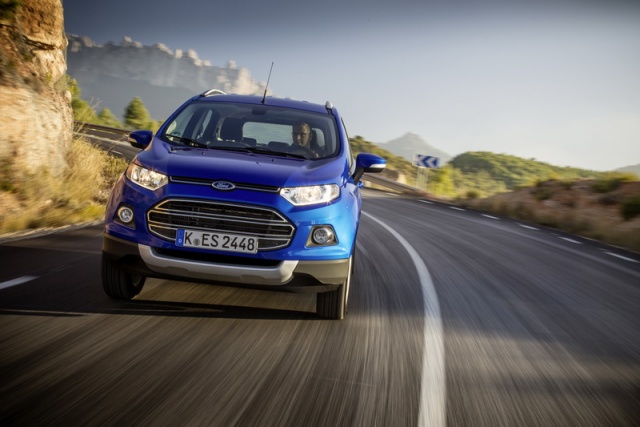 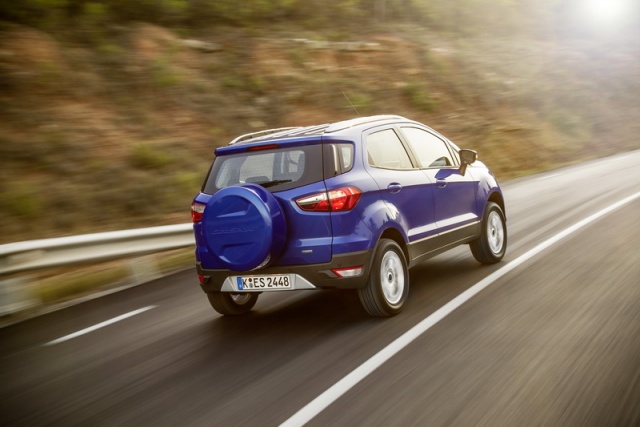 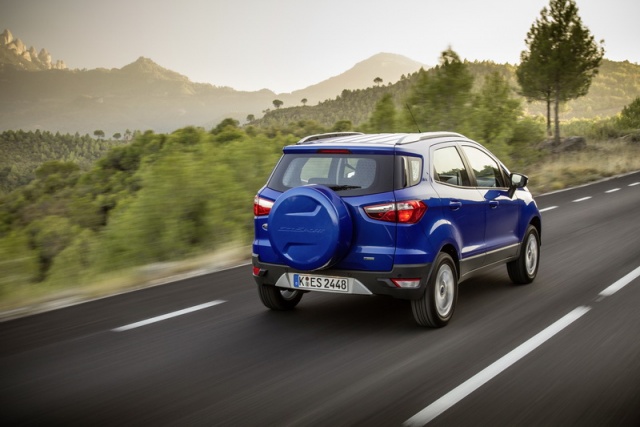 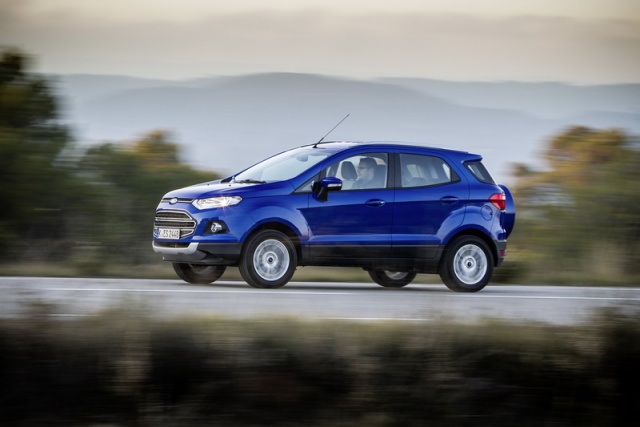 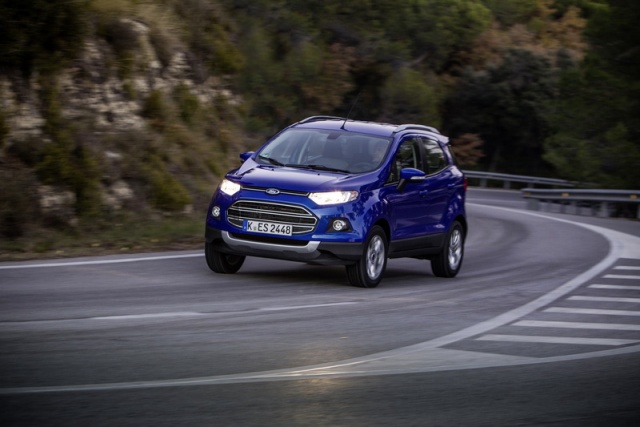 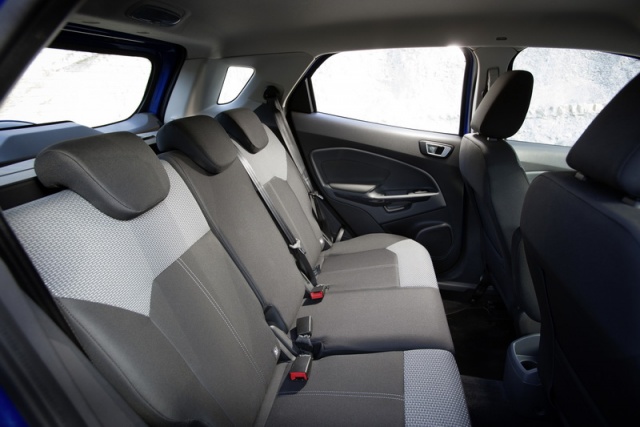 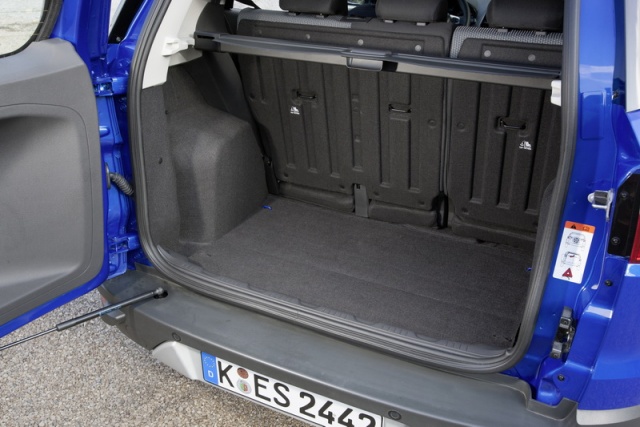 It seems to matter little whether we like Ford's new compact SUV or not, as it'll be huge.

It's a funky looking thing, the EcoSport, carrying rather a lot of influence from Ford's US catalogue, which is no bad thing. It's designed to appeal in a truly global sense too - designed and engineered in Brazil; it will be built there, in China and in Chennai in India, from where all European versions will come. That boot-mounted spare wheel looks a touch old-fashioned, but apparently it's a must-have for the Brazilian market. A downside of that is the necessity for a side-hinged boot door, which opens the 'wrong' way for right-hand drive markets, so plan your parking carefully when embarking on a big weekly shop. It should be able to hold that weekly shop though, as the lack of an internal spare wheel means you get a decent 375-litre boot.

Inside, more or less the entire cabin is lifted from the Fiesta and B-Max, and while it's a little over-familiar perhaps, that may be no bad thing. Certainly, the build quality seems very good on these pre-production cars and with Irish EcoSports coming only in high-spec Titanium trim, there are plenty of toys to play with, including Ford's clever SYNC infotainment system. It's comfortable and decently spacious too, although a little bit narrow in the front of the cabin.

Traditionally, it's in the driving that a Ford, almost any Ford, hammers home its advantage and the EcoSport seems up to that tradition. With steering and suspension lifted from the current Fiesta, that was always likely to be the case and the whole car moves with the same sort of liquid precision we've come to expect from Fords. That's doubly impressive when you remember that it was almost only at the last minute when Ford of Europe realised it was going to take the car and parachuted in engineers to help tune it for European tastes.

There are some things that even clever chassis engineers can't dial out though and when you've stretched a car up for a rough-road-friendly 200mm ground clearance, those include quite a lot of cornering roll and very firm initial suspension responses. To be fair, the Spanish roads we were testing the car on are in far better nick than most Irish roads, to it really needs a good drive at home before passing judgement.

The upshot of being initially developed for the Brazilian market though is a surprising level of rough-and-tumble ability. The 550mm water wading depth would shame many a supposedly capable larger SUV while the ramp and departure angles are similarly good. It's actually something of a shame that Ford of Europe isn't going to offer a four-wheel drive version, but there seems to be just no market for it.

Ford Ireland will offer the car with three engines at one price point and you can choose between a 1.5 TDCi diesel with 90hp, the 1.0-litre EcoBoost three-cylinder petrol turbo tested here and a new 1.5 VCT four-pot petrol that comes only with an automatic gearbox. Of the three, you're best off with the EcoBoost engine. The diesel is nothing but a disappointment - noisy and sluggish and always needing far too long to come on to both boost and cam. It may be more economical, and will save you around €80 on your annual motor tax bill, but the lively, rev-happy, sonorous EcoBoost engine is still a far sweeter thing to drive, and with a bit of practice, you should be able to get close, or at least close enough, to diesel-like fuel economy.

By offering one trim with the choice of three engines at the single price of €23,995, Ford Ireland is certainly keeping things simple when it comes to the EcoSport. Titanium trim comes with plenty of standard kit, the precise details of which are still to be decided but which should include SYNC, parking sensors and LED daytime running lights, as well as a full battery of active and passive safety systems. However, having one high price may put off buyers who may well end up paying similar money to get the spec they want but who will be attracted by the lower entry prices of the Peugeot 2008 and Renault Captur. Or who equally may be swayed by the argument to by a bigger, more versatile (if more basically-trimmed) Skoda Yeti. And then there's the question: what's the point of building a car in a low-cost factory in India if it doesn't give you a price point advantage over similarly-equipped European-built rivals?

The EcoSport recently scored 'only' four stars on the EuroNCAP crash tests, at a time when rivals are regularly coming home with full five-star ratings. Ford makes the, entirely cogent, argument that the gap between the EcoSport's score and a five-star one is merely the decision to keep costs down by not including such items as a rear seatbelt alert and a pedestrian-sensing camera system, and it points to the EcoSport's 93 per cent adult occupant protection rating from NCAP, a very competitive score. Still the question remains - if rivals can get a full five stars for the same or similar price tags, then where has Ford's cost-cutting measure gone?

Whatever we think or say about the EcoSport, it will be a success for Ford. It's pretty much already sold out in Europe and Ford is claiming that every single car Chennai can turn out will find an eager buyer. Doubtless so, and the fact that the EcoSport is engaging to look at and drive, initially well-made and certainly practical and will be of more use on truly rough terrain than many rivals shows that it deserves this pre-programmed success. Our only reservations are with the disappointing diesel engine and the apparent lack of a more tempting price point, considering the car's low-cost origins.