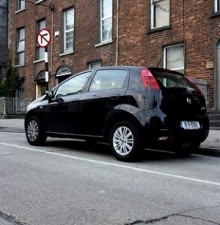 The Grande Punto will be with us for a couple of months. We'll report what it's like to live with the car and then replace it with the new Punto Evo later in the year.

Fiat's Grande Punto has been around for quite some time now. In fact, 2010 marks four years of the car on the Irish market and it seemed fitting that on the eve of the arrival of a new version of the Punto (the Punto Evo) we would spend some time in the Grande Punto, which will be sold alongside the newer car when that arrives in the coming weeks.

We have always known the Grande Punto to be pretty spacious and much better built than Puntos of old. Far from being the tinny and brittle car that it once was, the Grande Punto has evolved into a much better long term prospect than before. The car might have been around for a few years, but the Giugiaro styling, said to be inspired by Maserati, still looks fresh. Far from the days of awful cheap plastics, Fiat interiors have really improved of late.

Our long term car is a five-door Grande Punto 1.2-litre Sport, which comes with 65bhp from its four-cylinder engine - a tried and tested unit. We collected the car from South Dublin Fiat, where we were met by salesman Dean Kennedy.

The handover of the car was thorough and straightforward on what was a very wet and miserable afternoon. The car itself had nothing really too tricky to learn apart from the Blue & Me kit that is fitted as a €295 option. This enables hands-free phone operation via Bluetooth and it also allows you to play your MP3 player through the car's stereo. I use an iPhone so setting this up with Bluetooth was very straightforward. It is a little disappointing that this doesn't allow for streaming of music via Bluetooth, but once you have connected it up to the USB using the standard white iPod cable then you can have access to all your play list and music pretty easily.

What is impressive and probably not appreciated by most shoppers in the market is how well equipped this model now is. You get all-round electric windows, air conditioning, front fog lights, a half decent audio system and alloy wheels. In what is a so-called 'budget' car this is impressive.

Naturally your first few kilometres in a car tend to be pretty tame as you get the car run-in. And no, the 65bhp available from the Punto won't blow your socks off either. A speed of 120km/h on a windy motorway even feels a little bit like hard work; in fact this car settled down much better at about 10km/h short of this and even at that the engine is quite vocal.

This car is much better suited to city streets. The "City" button, which lightens the steering significantly to aid parking - and which we would have written off as something of a gimmick before - actually starts to make sense when it comes to tackling tricky parking spaces and also in multi-story car parks where the quick steering saves the arms - and your shiny alloys.

It is early days, but so far the car hasn't missed a beat as we approach the first 1,000km, nor would we have expected it to.