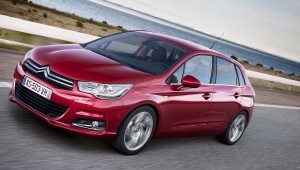 Citroen's new C4 is a big step-up in quality for the French brand, but can it worry the big sellers?

The Citroen C4 was always quite an underrated car and might have sold better if it hadn't come in at a time when the brand was going through some turmoil here in Ireland. Citroen's market share, at 1.21 percent, is still low and this is something that this new, core model must address.

The outgoing C4 is not a bad looking car and even several years on it still looks pretty fresh, especially the three-door version. That body style is no more, for now, so this five-door C3 is set to be the core model. It is a handsome thing, with lots of the look of the C5 and to a lesser extent some of the DS3 styling cues, although without too much in the way of flamboyance.

It is only fractionally larger than before, but feels very spacious inside and has the largest boot in its class at 408 litres with the rear seats in place. The interior quality shows a marked improvement over the old model's and the plastics used really are first class. The dials are also better; gone are the rather irritating digital dials of the old car, although Citroen still couldn't resist adding mildly annoying sounds to things like the indicator and warning buzzers. You can, bizarrely, alter the sound of the indicator through various degrees of irritating.

The C4 line-up in Ireland will be dominated, as you might expect, by diesel power. There are three turbodiesel units with outpurs ranging from 90- to 150hp. For Ireland the main sellers will be the 1.6-litre 90- and 110hp versions. Emissions are low, starting at 109g/km, so they will be in Band A - and later models will drop as low as 99g/km. The e-HDi version comes with stop-start technology and that version is also fitted with Ultra Low Rolling Resistance tyres.

The steering is much better than before in the new C4, and the car feels like it rolls less through corners too. It isn't overtly sporty but that's not the intention of this car. The gearchange is still a little on the imprecise side and is probably the weak point of the car.

This remains a very comfortable cruiser and the diesel engines we tried felt strong and quiet, thanks to an increase in the sound-deadening used. This is a car that you could rack up lots of motorway miles in comfortably and ache-free.

What you get for the money

There are no firm details on pricing for Ireland just now, but we will get the same specification levels as the UK does, so expect VTR, VTR+ and Exclusive levels, with the entry-level model likely to get alloy wheels and air conditioning as standard. Citroen Ireland is hopeful of having a starting price of €19,900 for the car when it goes on sale in January 2011.

The EGS clutchless transmission will be available from launch and this is clever in that if offers better fuel economy and lower CO2 than the manual versions.

The new Citroen C4 has a lot to do to. This is a segment fiercely dominated by the Ford Focus and Volkswagen Golf, and Irish buyers will need convincing to look elsewhere. However, the C4 is certainly a worthy contender. Much improved over the model it replaces, it is better to drive, looks and feels more refined and is high on safety too.