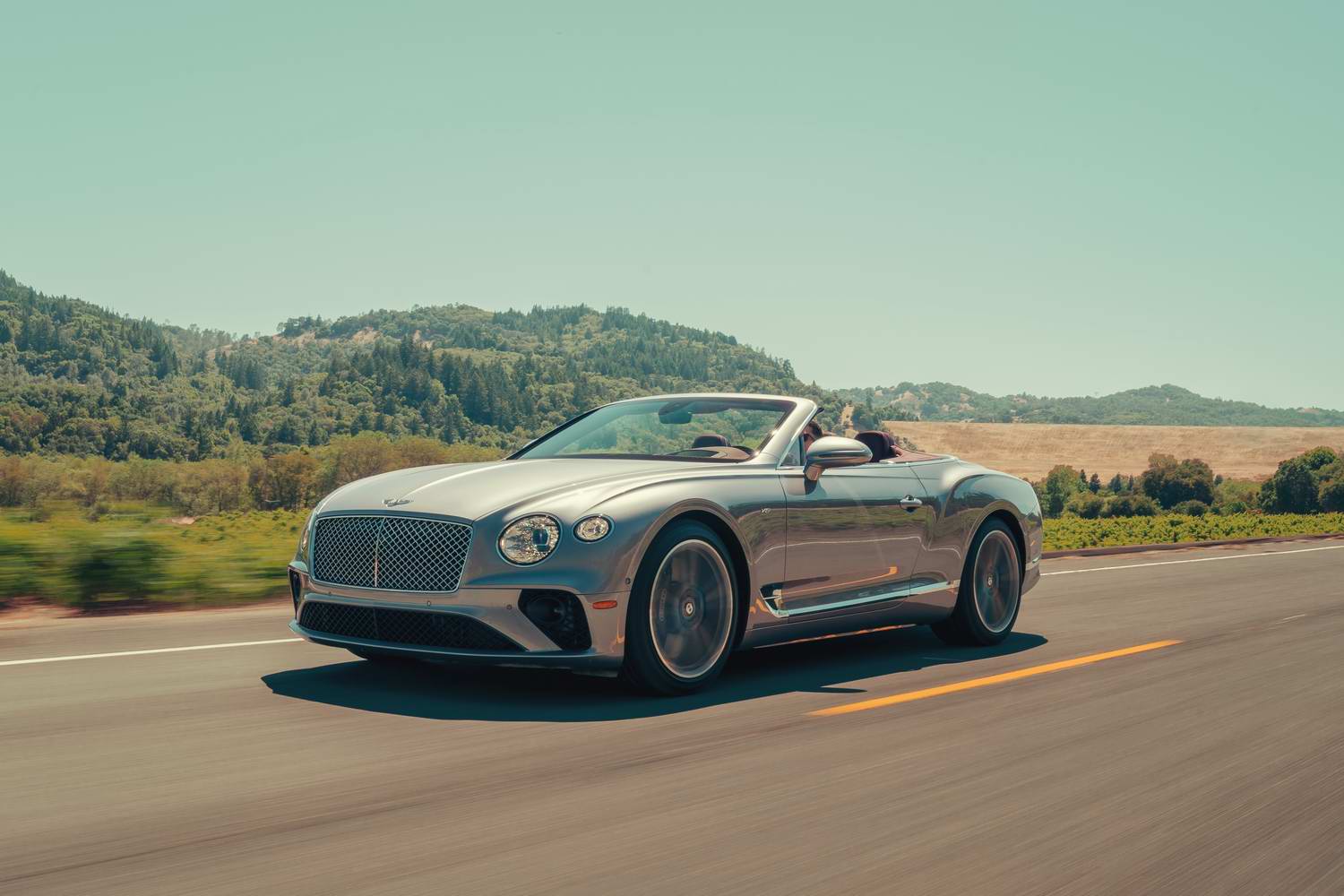 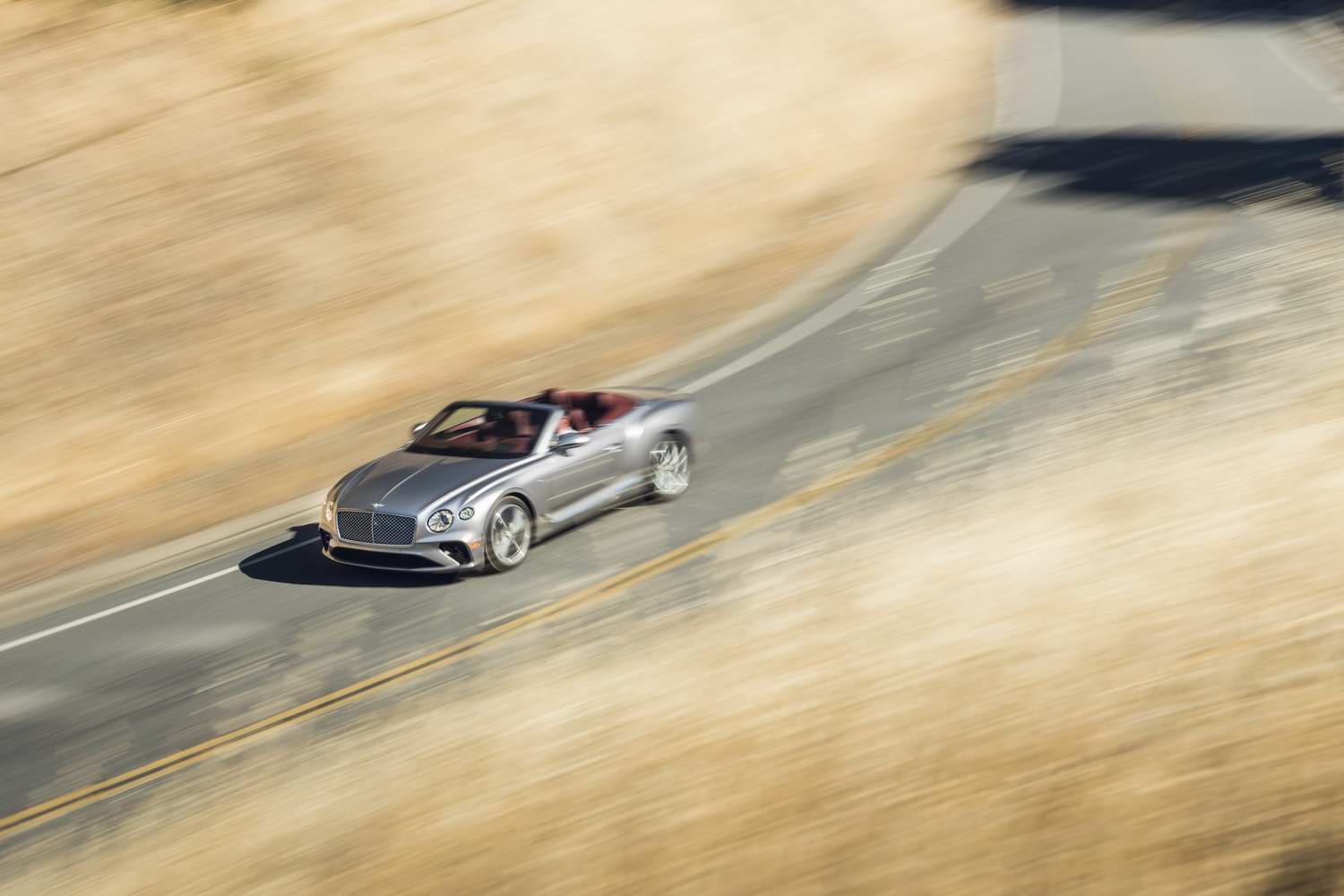 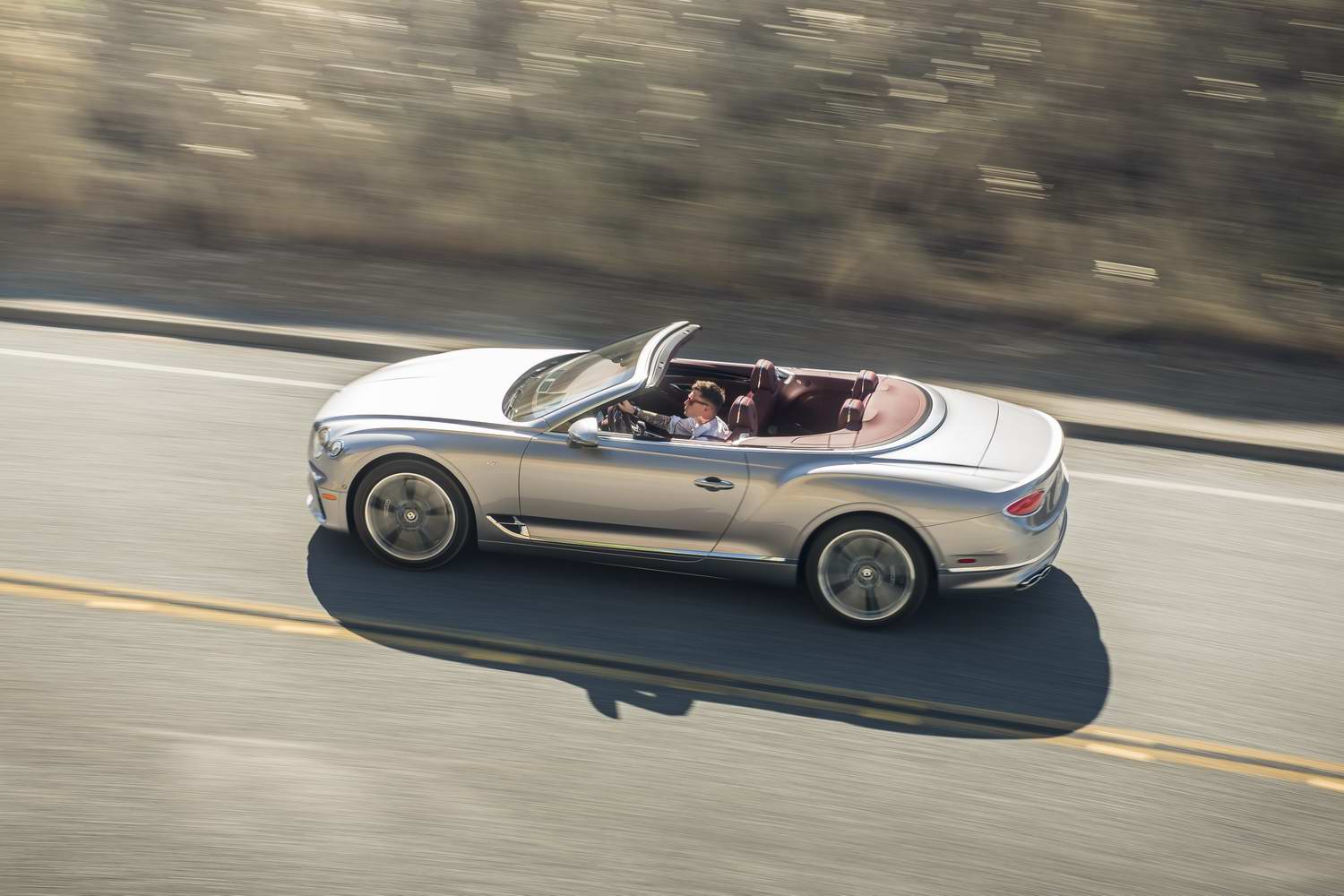 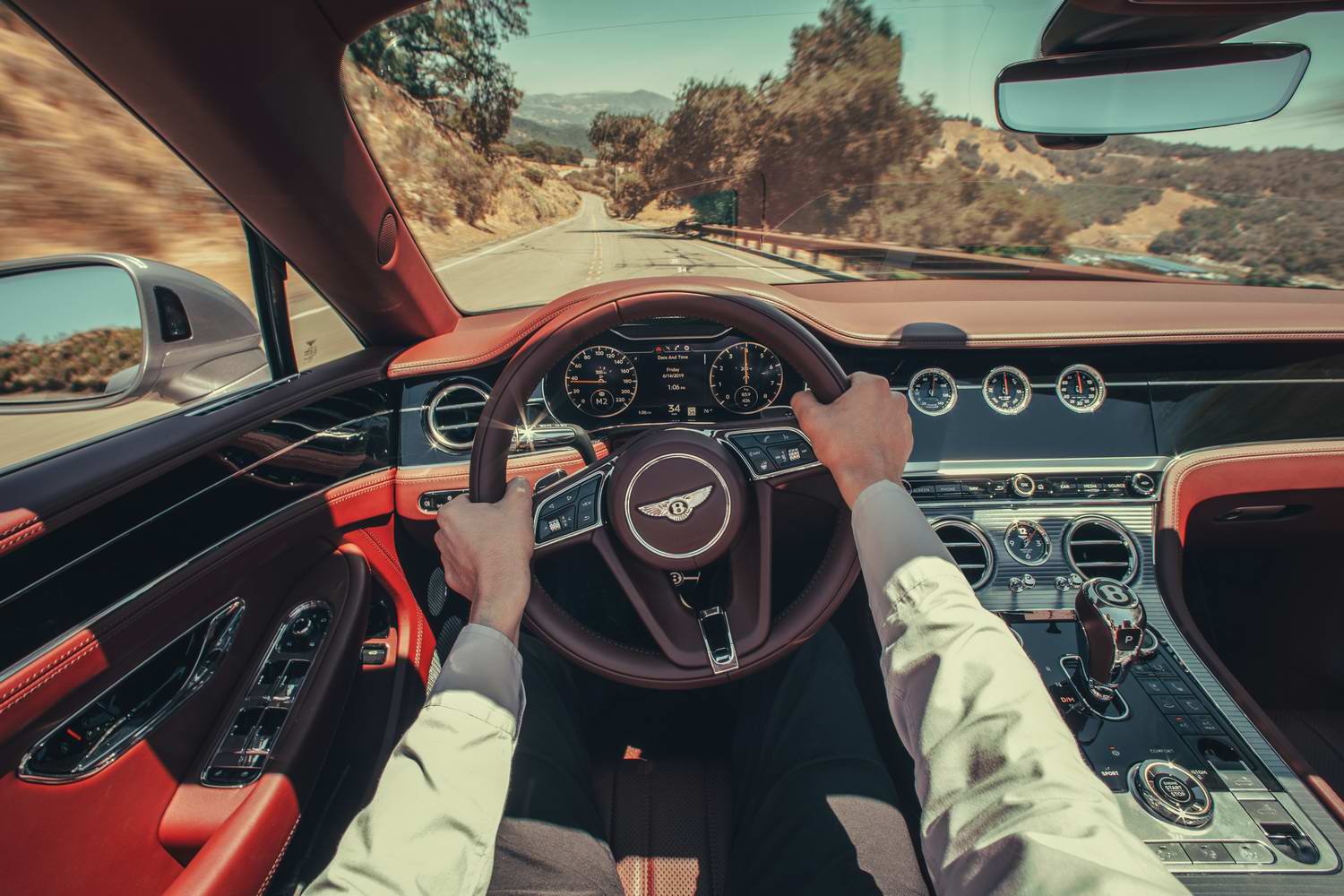 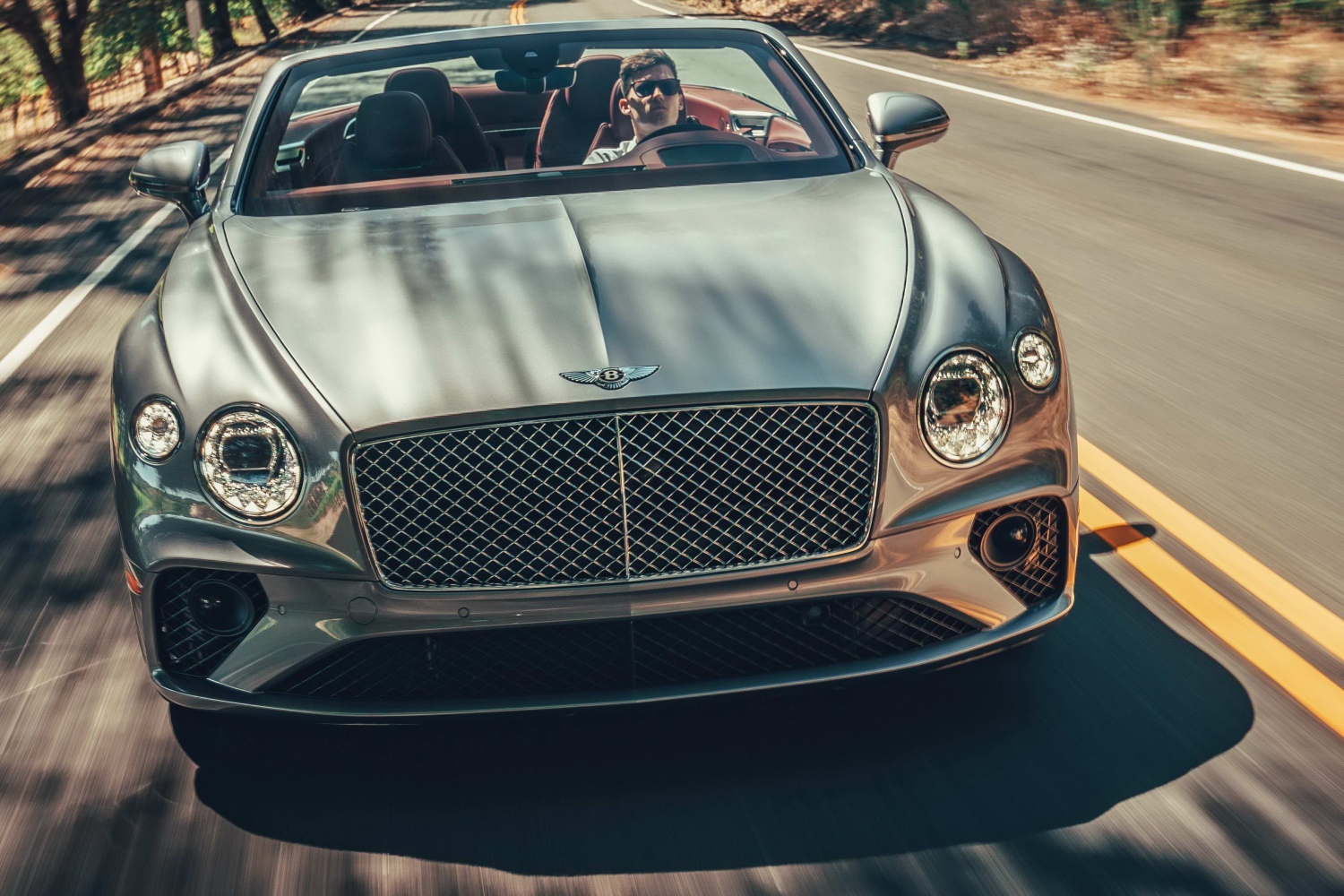 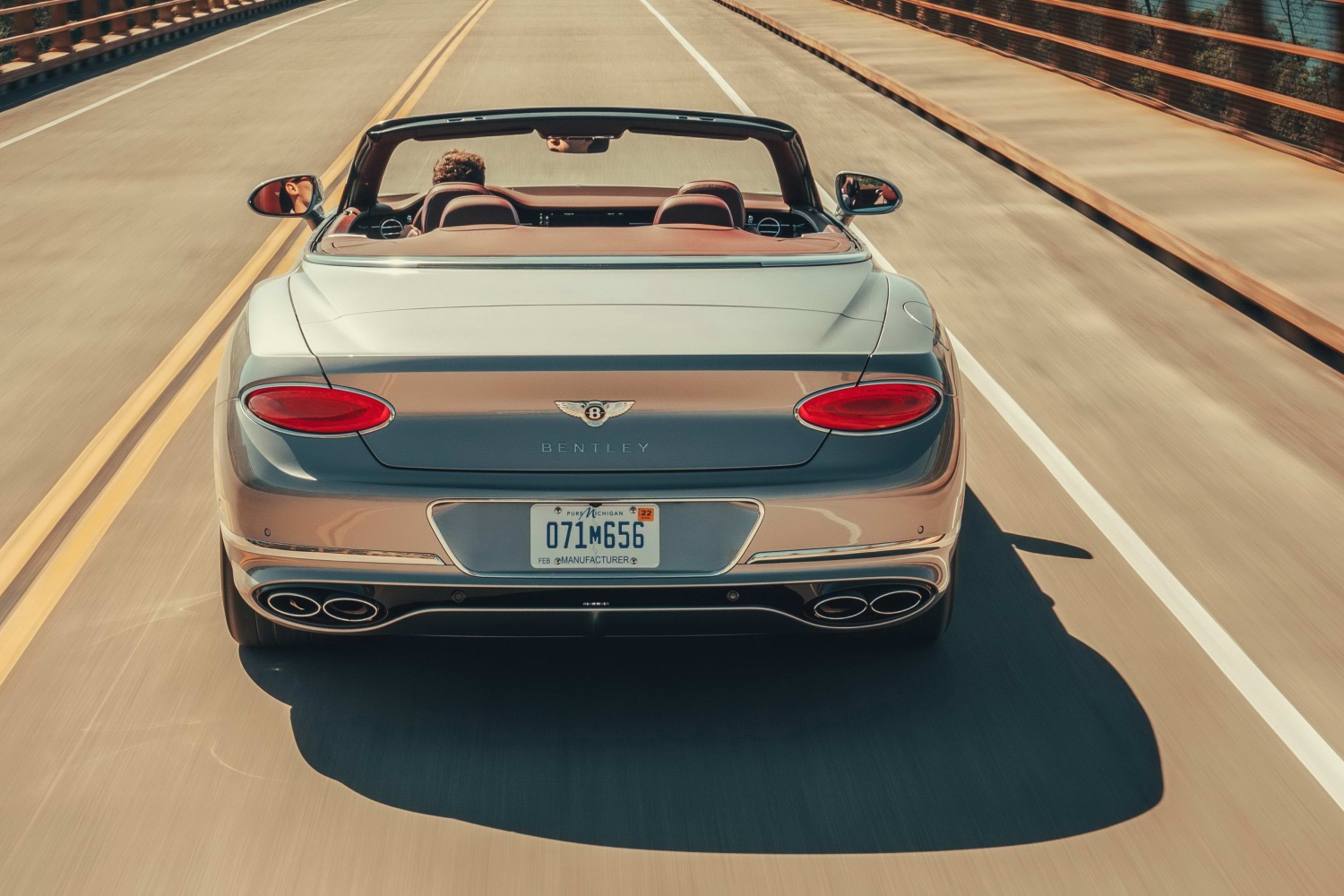 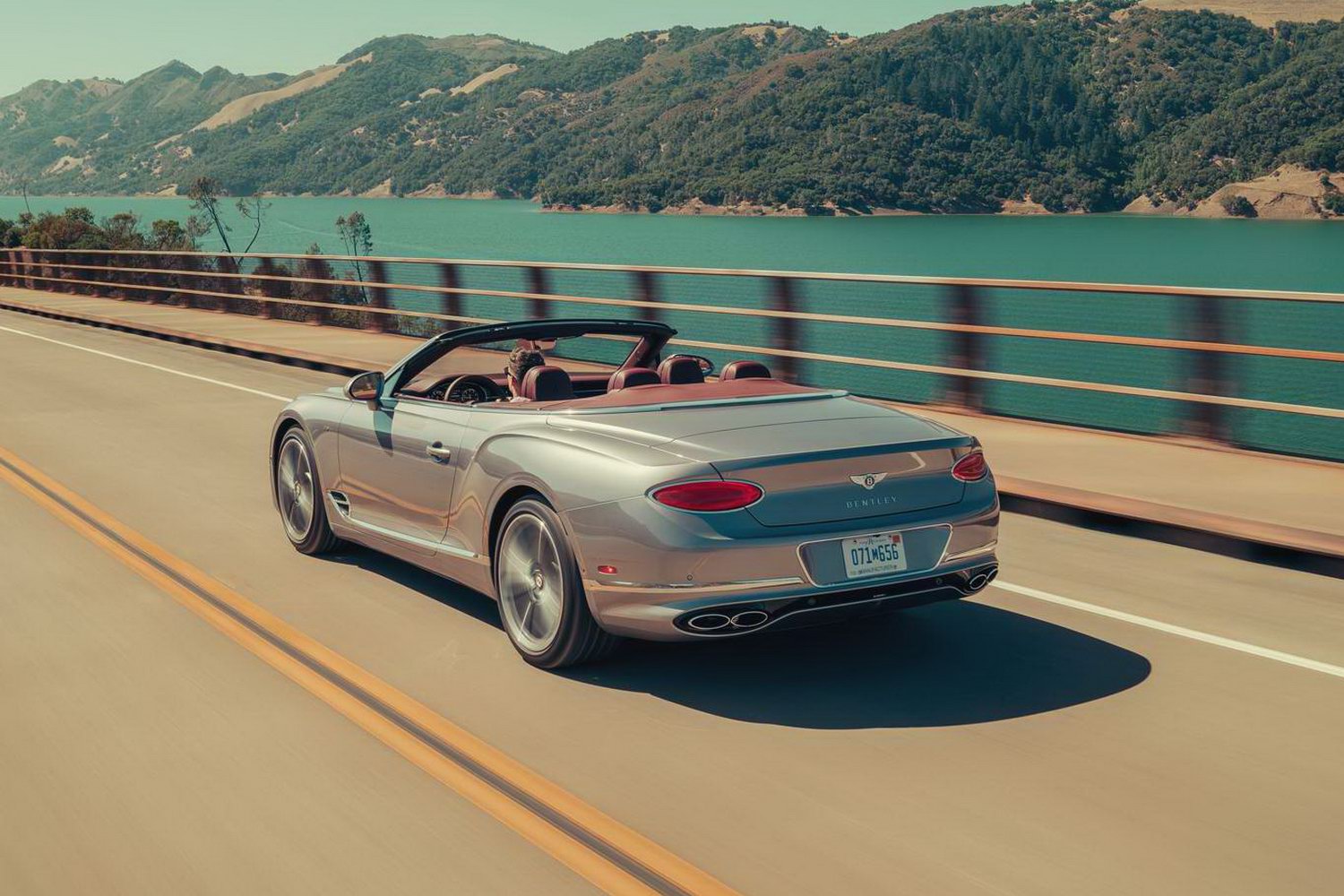 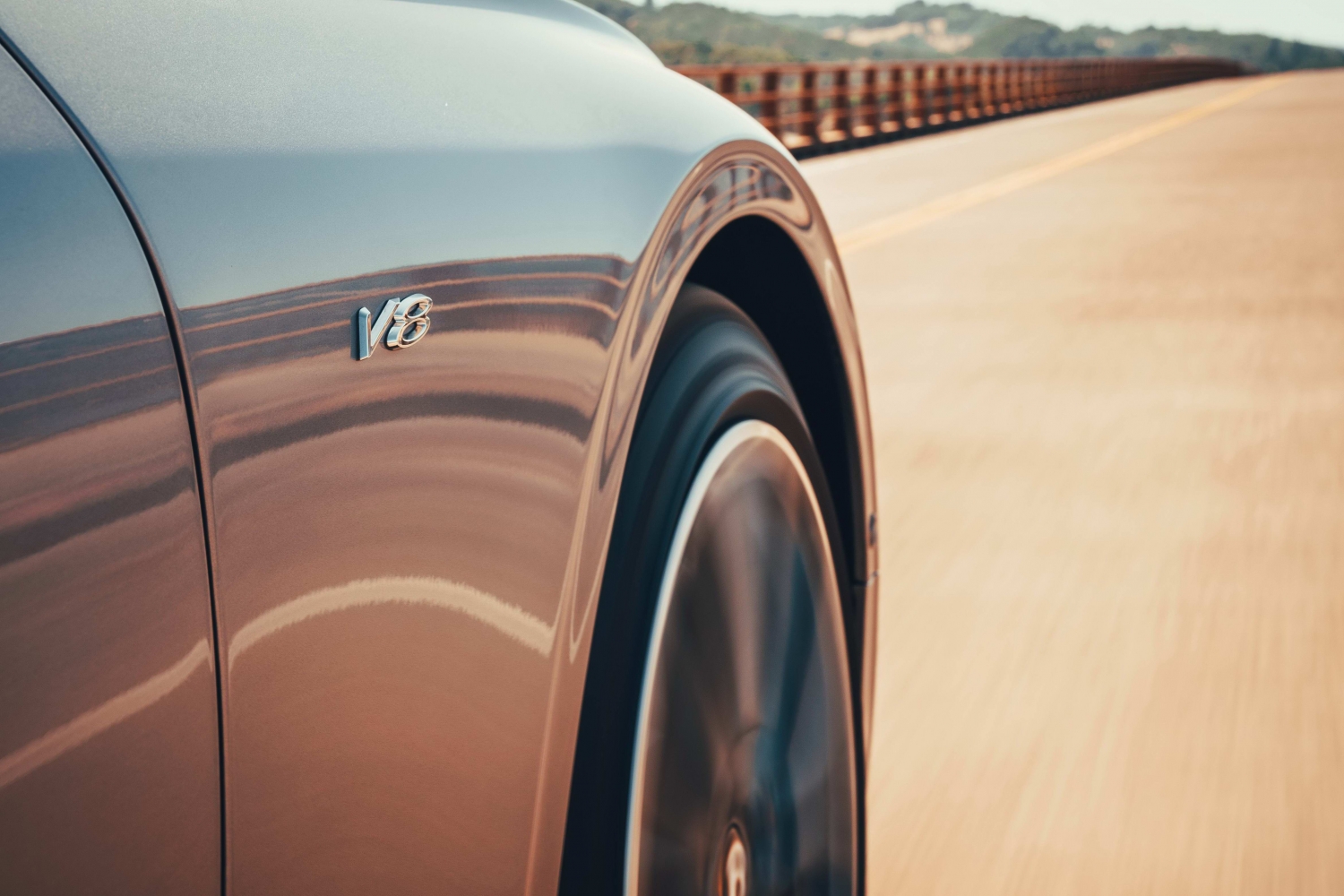 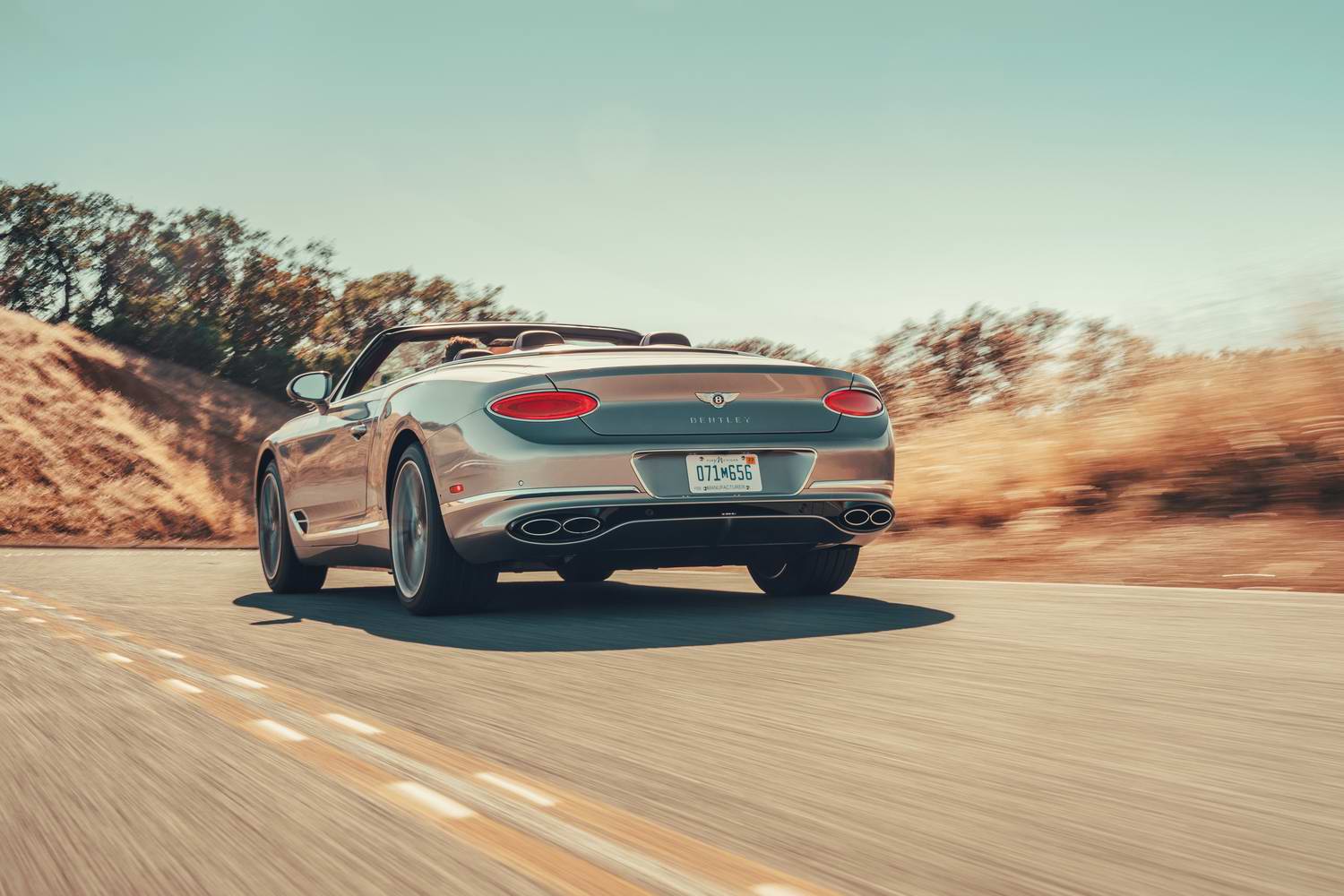 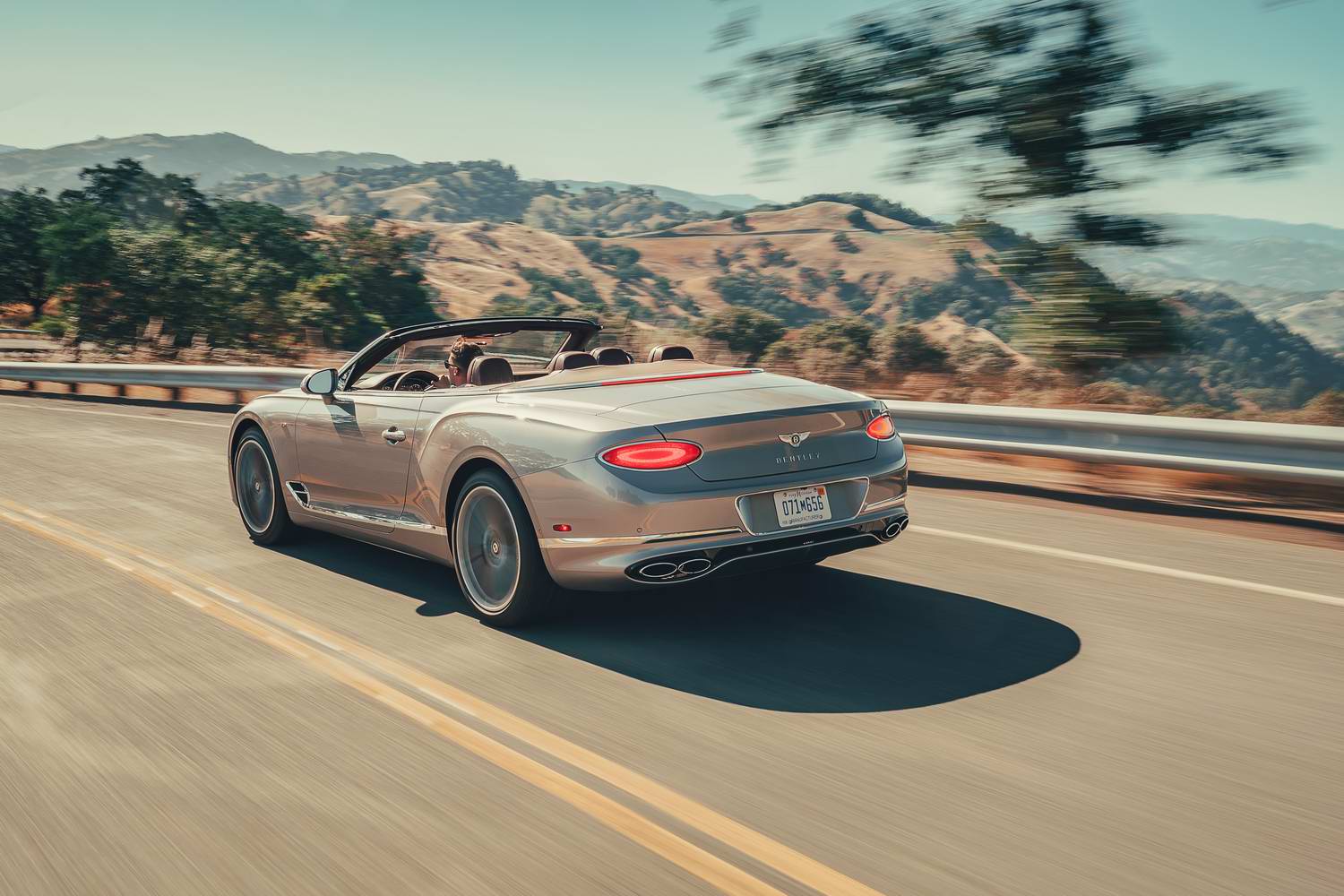 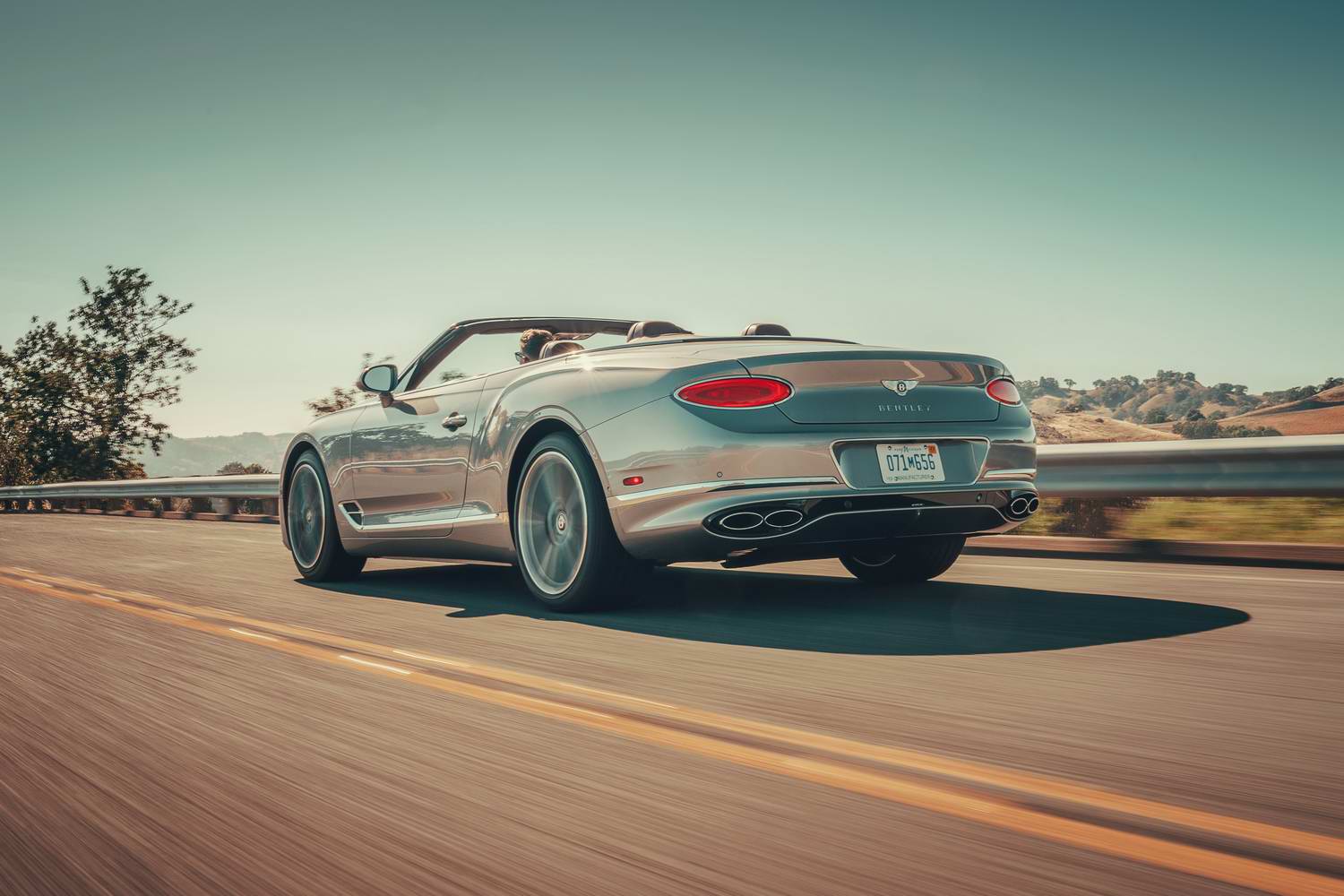 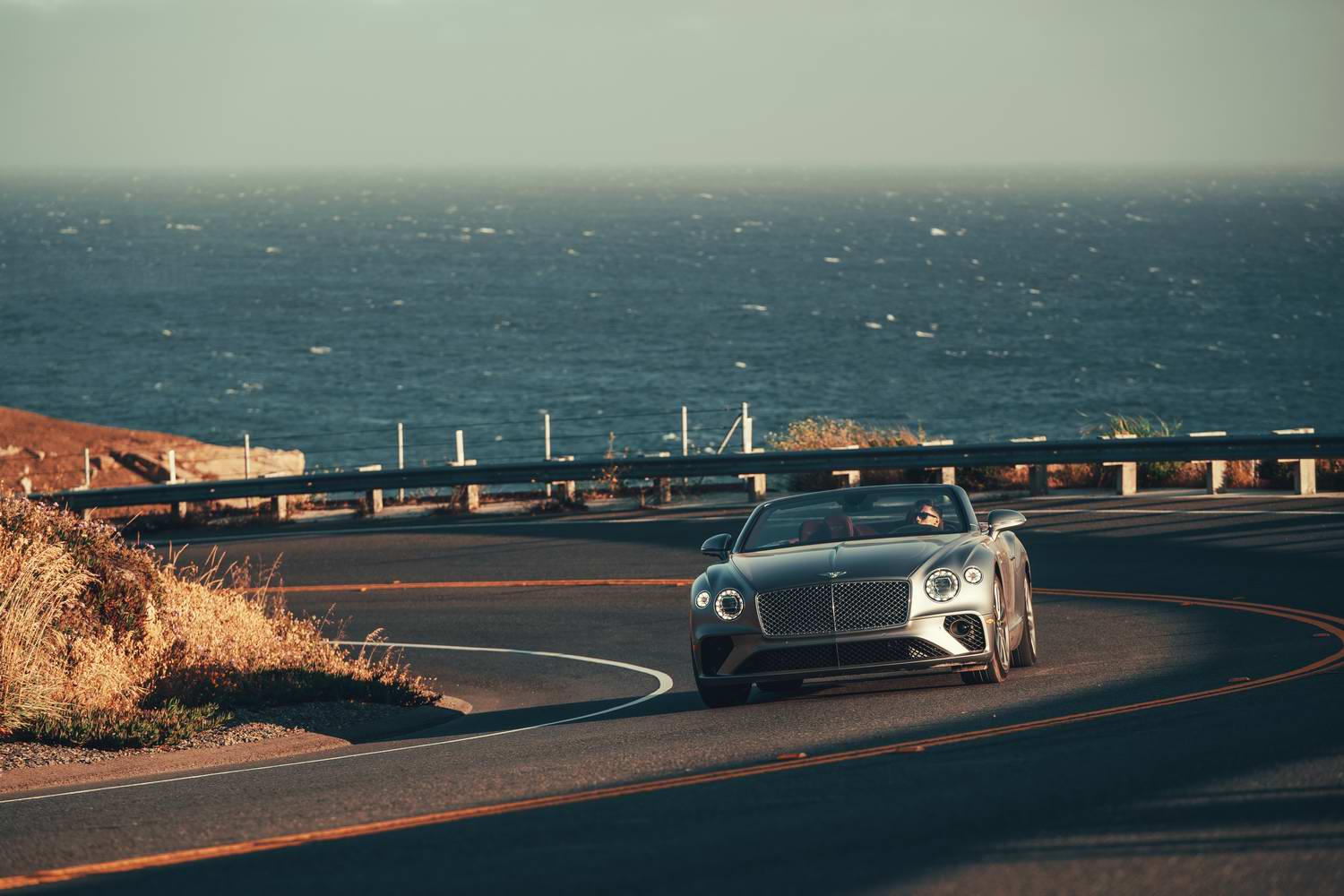 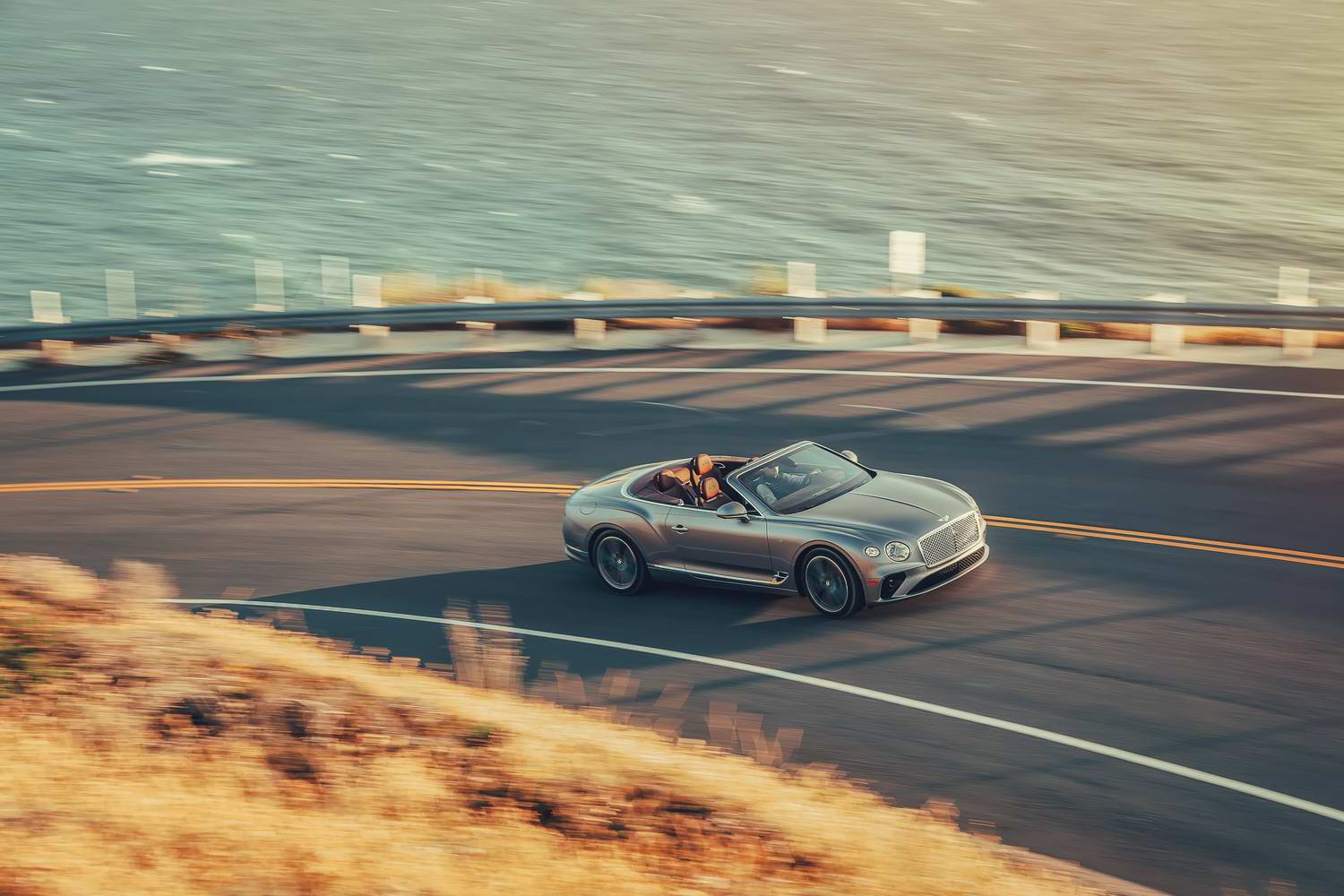 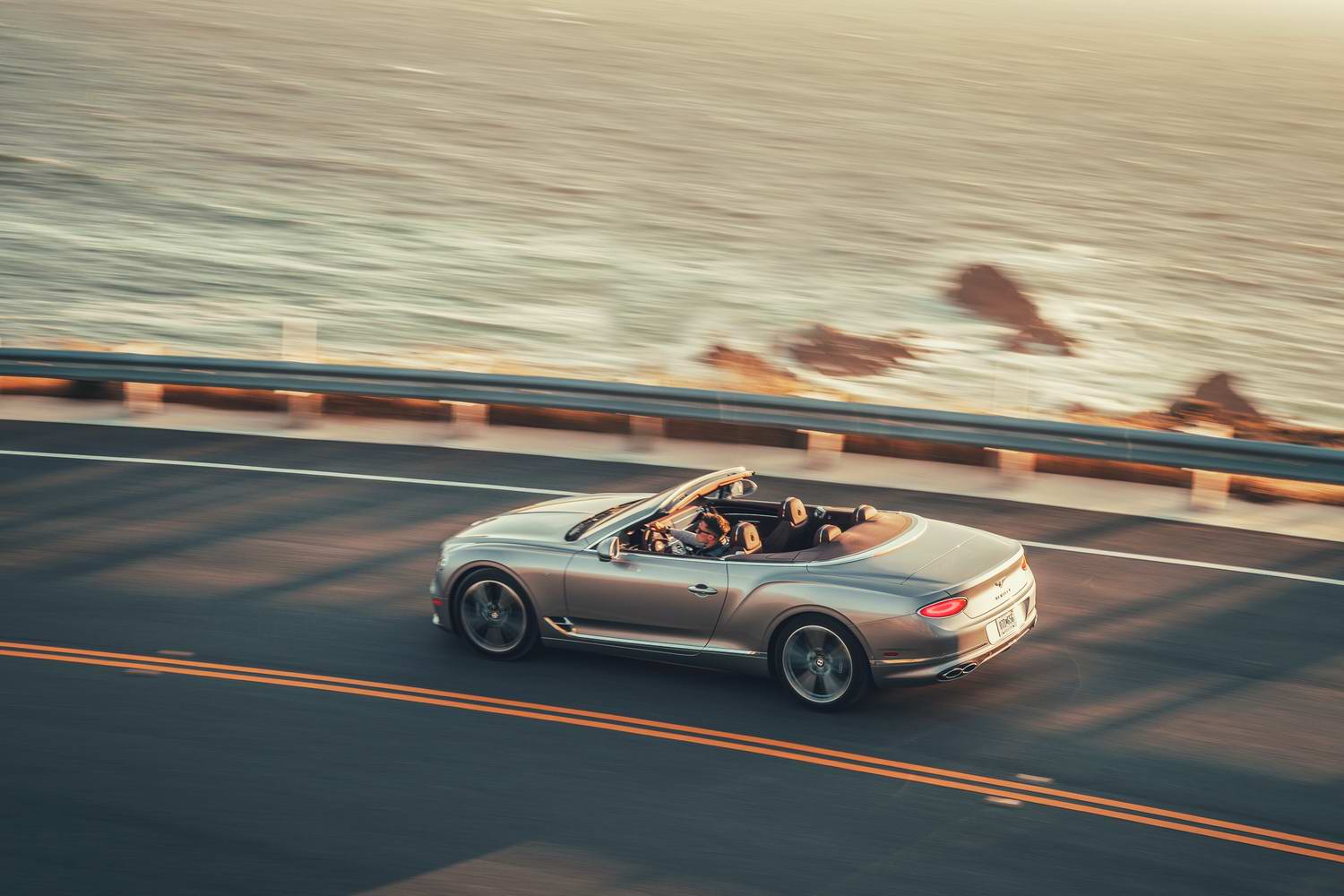 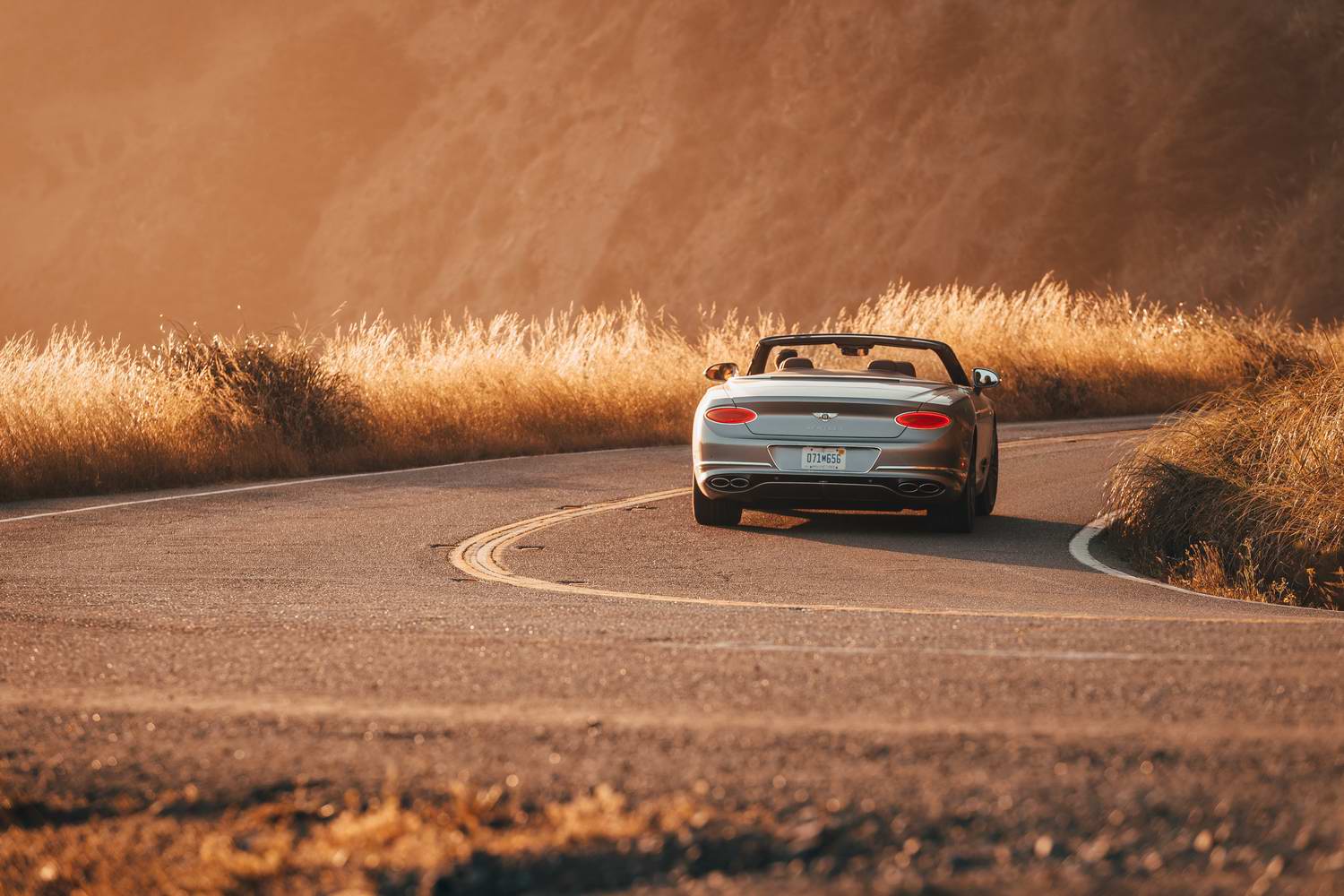 This is the best grand tourer in the world - the Bentley V8 GTC is sensational.

This is an example of engine downsizing that has perfected what was already a stunning package. The Bentley Continental GT Convertible V8 is everything you could possibly want of a luxury yet sporting grand tourer.

Bentley has given its luscious Continental GT Convertible, or GTC, a smaller engine. All things are relative, naturally, and therefore we're not about to say the luxury marque has slotted a 1.5-litre three-cylinder petrol unit into its epic grand tourer; instead, it has switched out the 6.0-litre biturbo W12 for a marginally more conscientious 4.0-litre twin-turbo V8. It's a move that happens in all modern Bentley ranges eventually, save the Mulsanne, as the previous Continental GT went V8 just one year after the W12 launched in 2012 and, while we're waiting for the unmitigated glory that is the current Flying Spur to make the same cylinder-slashing switch, the old model of the Bentley saloon sure as sandwiches had a 4.0-litre derivative, too.

Still, this downsizing malarkey is even better news for the GTC in 2020 than it was at any prior point in the model's lineage, simply because the current car is working off much better source material than the old 'Mk2' Continental was when it transferred to V8 propulsion eight years ago. The current Continental looks leaner, has a better cabin and sports a sharper chassis, without sacrificing any of the cosseting luxury that this revered marque is, um, revered for. We've already declared that the same powerplant installed in the Bentayga SUV makes it undeniably the class-leader in its rarefied segment, so we're hoping for much the same transformation from the Continental GT Convertible.

You'll not spot one of these V8s easily, mind, certainly from inside where there's absolutely nothing to give the game away - which is to say, you sit in an exquisite passenger compartment, which looks well capable of actually taking four adults on board at a push (and, granted, with some careful shuffling of the sumptuous leather seats), and revel in the Bentley Rotating Display, the crisp digital instrument cluster, the immaculate switchgear, the vastly improved and bang-up-to-date infotainment system and the typically exemplary wood veneer trim and faultless stitchwork. On the outside, too, there are only the subtlest of clues to the paucity of cylinders: the V8 model has quad oval exhaust exits, rather than the broader finishers of the W12, while there are discreet 'V8' badges on the front wings. Used to be that the winged 'B' badges switched from red to black depending on how many cylinders your Continental had, but even that little detail has been dropped nowadays so the V8 model looks no less expensive, deeply desirable nor downright gorgeous (yes, we said it, gorgeous) than its 6.0-litre sibling.

There's the potential here to make the claim that the 4.0-litre V8 is a Volkswagen Group engine, while the W12 6.0-litre is not. Now, before you start writing in and accusing us of being idiotic (they're both Volkswagen Group engines, most emphatically), what we mean by this is that the V8 is used by other Group products, such as the ever-so-closely-related Porsche Panamera and the Audi RS 6 Avant for instance, whereas the W12 is only to be found beneath the broad bonnet expanses of Bentleys and Bentleys alone. So, if you were really into sneery fault-finding and picking holes with the tiniest of details, you could say that the V8 GTC offers a less 'special' Bentley experience than the W12 GTC can serve up.

Well, we're here to tell you people that you're way off the mark. Everyone's entitled to their opinion, of course; it's just that 'W12 > V8' is a hopelessly wrong opinion. With the switch to the new MSB platform in 2018, the Bentley's 'sportiness quotient' was significantly increased, without compromising the unrelenting comfort levels that a Conti GT should be capable of. So if you can further maximise the dynamic handling talents of the car, all still while preserving its continent-crushing skills, then you're just making what is probably already the best grand tourer of the lot into what is undoubtedly the best grand tourer of the lot.

You see, the V8 GTC is 79kg lighter than the W12 GTC and that reduction in weight is all over the leading axle of the car. It's still nose-heavy, 55 per cent of its mass located in the front half of the vehicle, but it's less nose-heavy than the 6.0-litre model. And that makes the 4.0-litre Bentley a delight in the corners. This marque is one of those hallowed few in the modern era that has seen its engineers get a real grip on how you do switchable in-car driving modes and ensure you make them thoroughly laudable while you're at it. So, when you have the V8 in Comfort, it is a true wafter, effortlessly gliding over even the very worst road surfaces with barely a ripple from the tarmac below disturbing the mill-pond serenity of the passenger compartment. Knock it up into Bentley and you feel the GTC get firmer, hunker itself down more, but it'll still flatten out the most appalling, ancient asphalt into something that feels like it was freshly laid in the middle of the Covid crisis when repair crews were out making good all the quiet bits of the road network while everyone else stayed at home. And then Sport really ups the ante, because the four-wheel-drive system will now only put a maximum of 17 per cent of the overall torque the way of the front axle, whereas it'll apportion 38 per cent to the nose of the Bentley in the other two modes. In Sport, the Conti GTC belies its considerable size and 2,335kg mass, and feels every inch the handling match of the Panamera upon which it is based - all rear-biased and willing, eager in the corners. It is thoroughly magnificent.

We should add here that the damping never becomes too firm in Sport and, conversely, the body control of the GTC isn't too slovenly in Comfort, while the steering across all three settings is simply delightful. And then there's the engine, and more specifically the noise. It might well be 85hp and 130Nm down on the W12 on paper, but if anything, the V8 GTC feels and sounds the more rabid of the Continentals when driving quickly. This drivetrain is a jewel. You'll not find a situation where the eight-speed gearbox is fazed, you'll not want for any more traction than the four-wheel-drive set-up can bestow on the car, you'll not discern any noticeable lag from the hot-inside-V engine; and the noise of it is a wonderful, rippling, muscular gargle, subdued and background-ish when you want it to be, gloriously loud and intense when you don't (thank the two-stage exhaust system for this sonic mischief).

And the Conti GT V8 is as cushioned, as refined and as cultured as you could possibly want at all other times. Hood up or down, cabin comfort is absolute and even on the 22-inch wheels of the optional Mulliner Driving Specification, the long-distance ride quality is nothing short of faultless. The oft-quoted reason for the V8's existence is that it can switch four of its cylinders off when needs be to save fuel, blessing it with a greater maximum cruising range on a full tank, to the tune of 744km on Bentley's claims. This is entirely believable stuff because, somewhat remarkably, this 550hp, 2.3-tonne, all-wheel-drive palace on a set of sports tyres managed to turn in a scarcely credible 28.6mpg (9.9 litres/100km) on one long motorway run. Seriously, that's outrageously good economy from a vehicle like this.

We're only deducting half-a-mark here because we feel there could be a bit more of a value gap between the V8 GTC and the W12 flagship, but frankly that's coming at this whole thorny issue of house-priced cars from a proletarian's impoverished point of view. To the lucky beggars who can afford a machine like this, saving x number of Euro on one luxury item to the next is not even a concern. So actually, for what you're getting here - the engineering, the craftsmanship, the sheer astonishing level of ownership reward - the price of the Conti GTC V8 is perfectly fair; it's just that we can't possibly give a machine that is €361,000 as tested five out of five in this department. We're not bourgeois lunatics, you know.

We cannot use the word 'perfect' when reviewing the overall qualities of a car, because no vehicle should be perfect - how could any manufacturer hope to improve in the future if that were the case? However, when considering the Bentley Continental GTC V8 and its 'grand tourer' remit, we are struggling to know how you could possibly make this sublime car any better at what it has to do. Sure, it's hardly an inexpensive vehicle, but no 500hp-plus GT can be realistically considered affordable. So we'll sum up with this: the Conti GTC V8 is not the perfect grand tourer, but - for the life of us - we cannot tell you precisely why it isn't perfect. Because we honestly can't really fault it in the slightest. Oh, wait, hang on a sec - how about an even sportier, even noisier GTC V8 S? Yes please. 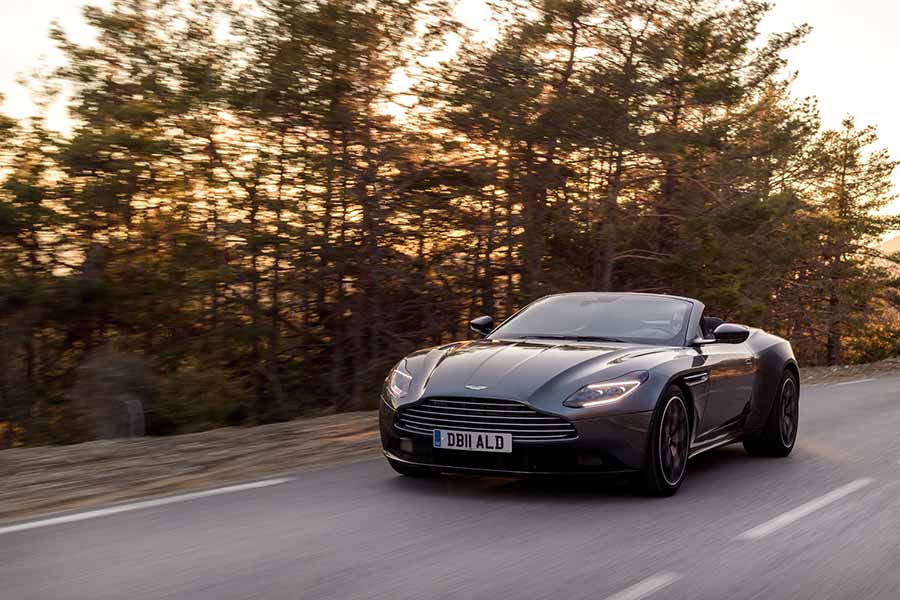 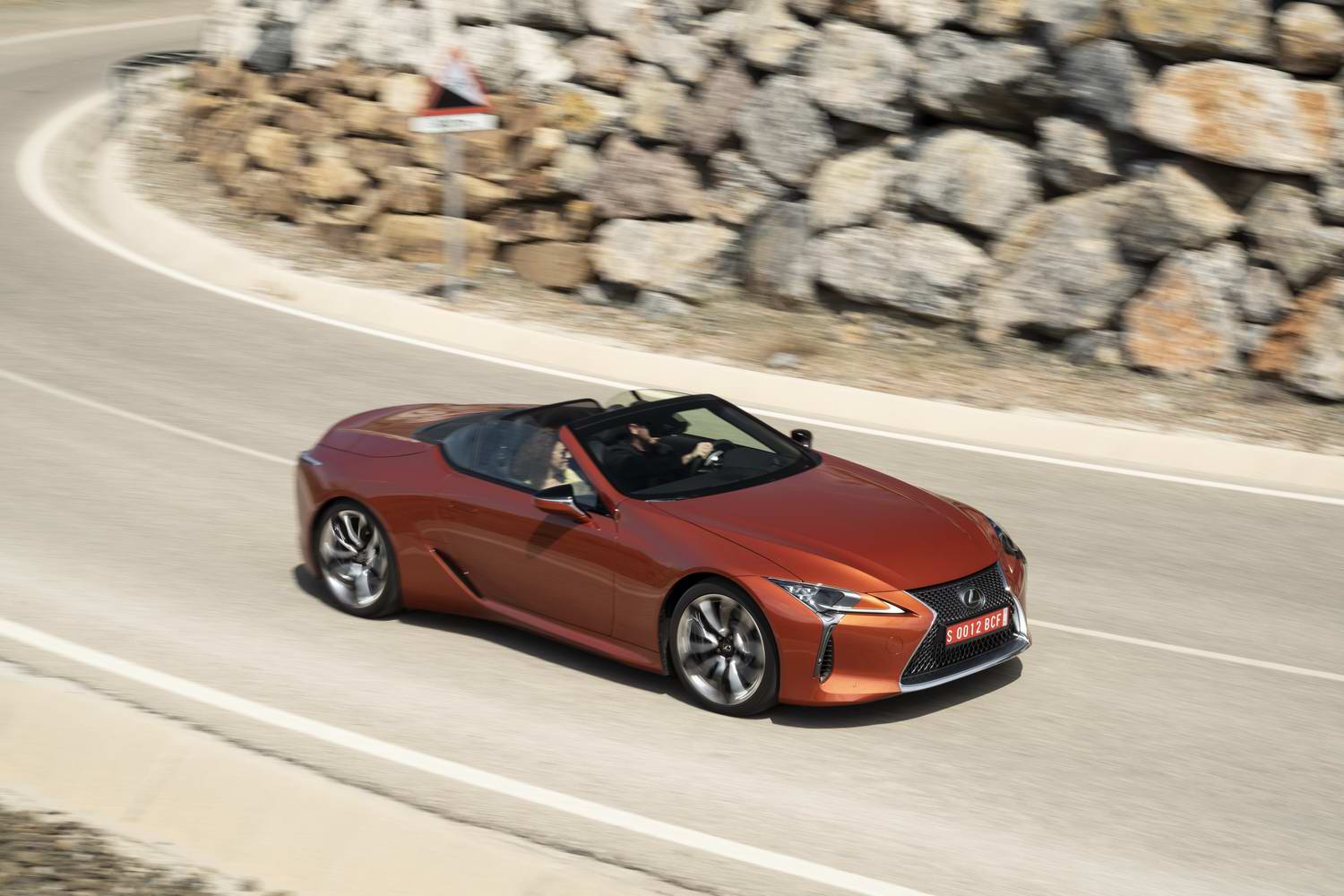 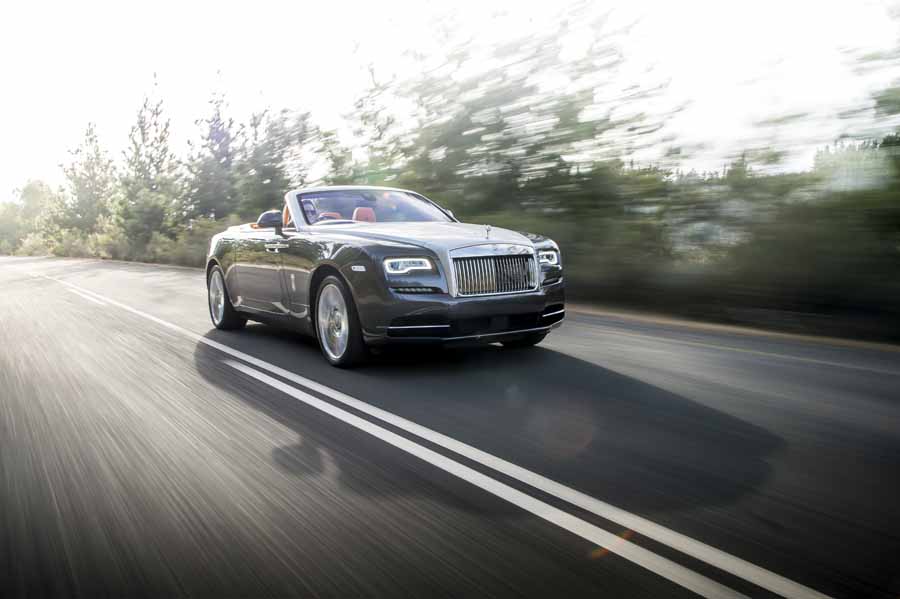 Rolls-Royce Dawn review
Rolls-Royce Dawn vs. Bentley Continental GT Convertible V8 (2020): ramps up the unstinting luxury and refinement at the expense of driving dynamics. The Dawn is a different open-top experience again, but its architecture is getting old now and you're looking at half-a-million Euro just to get into the Roller.