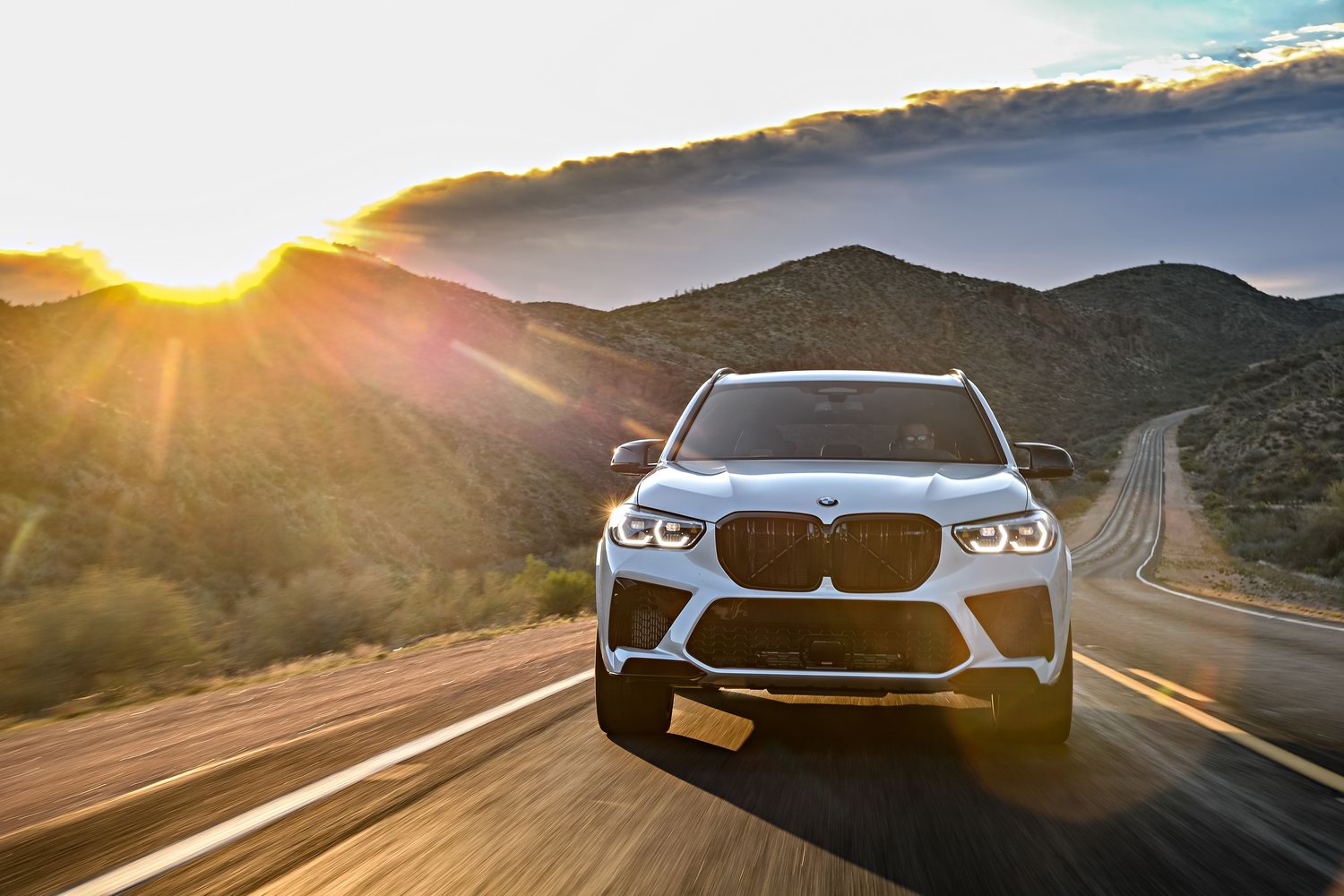 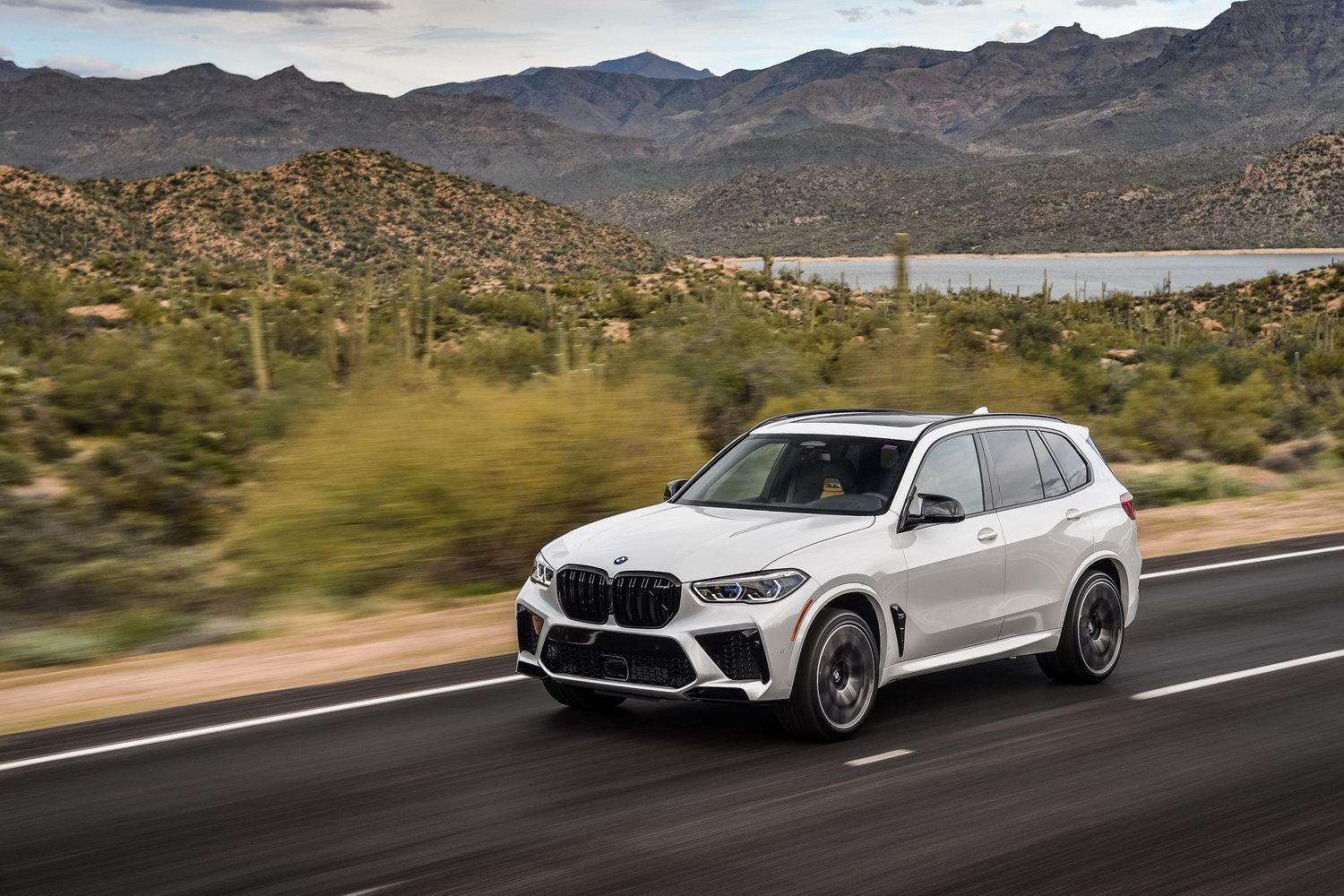 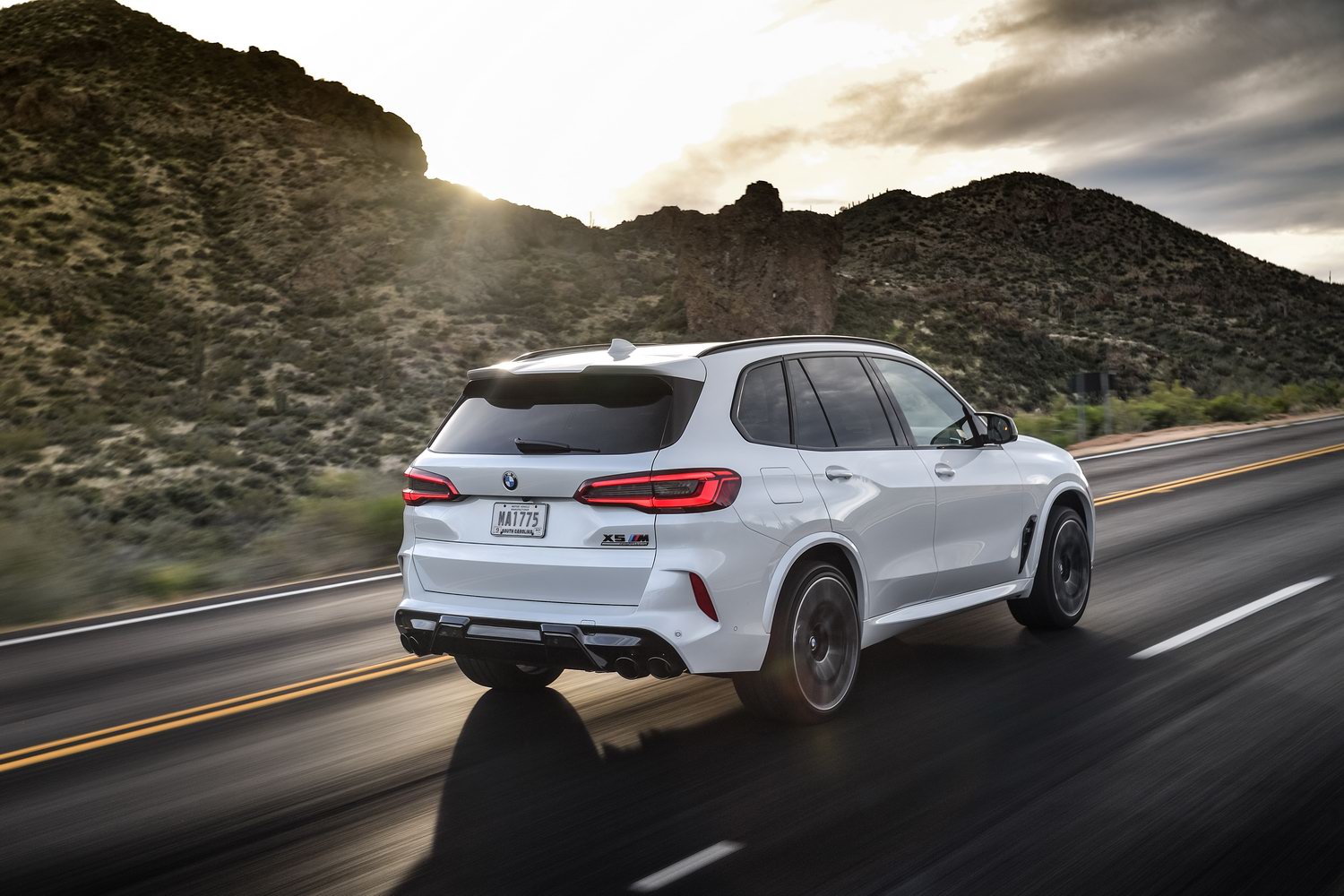 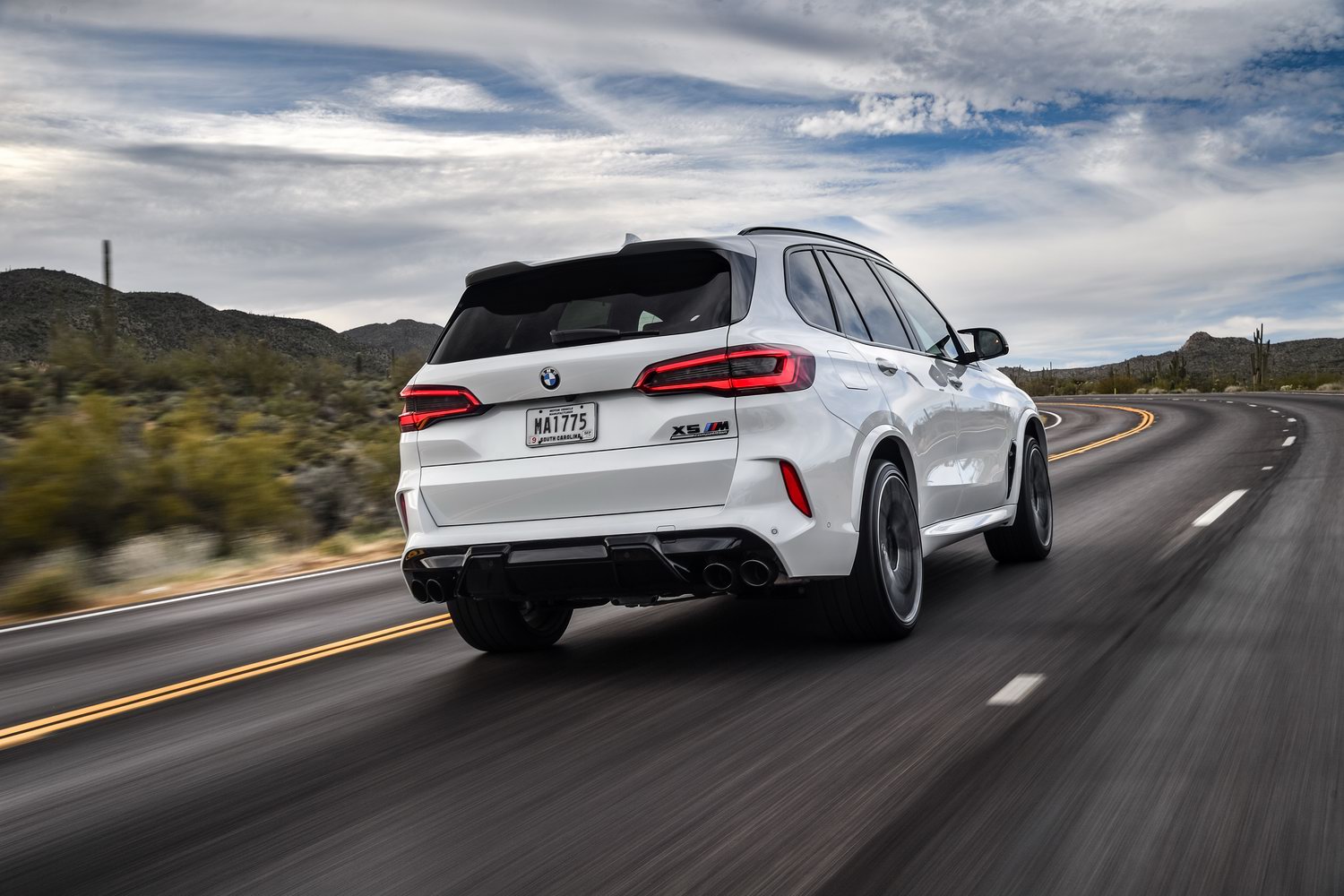 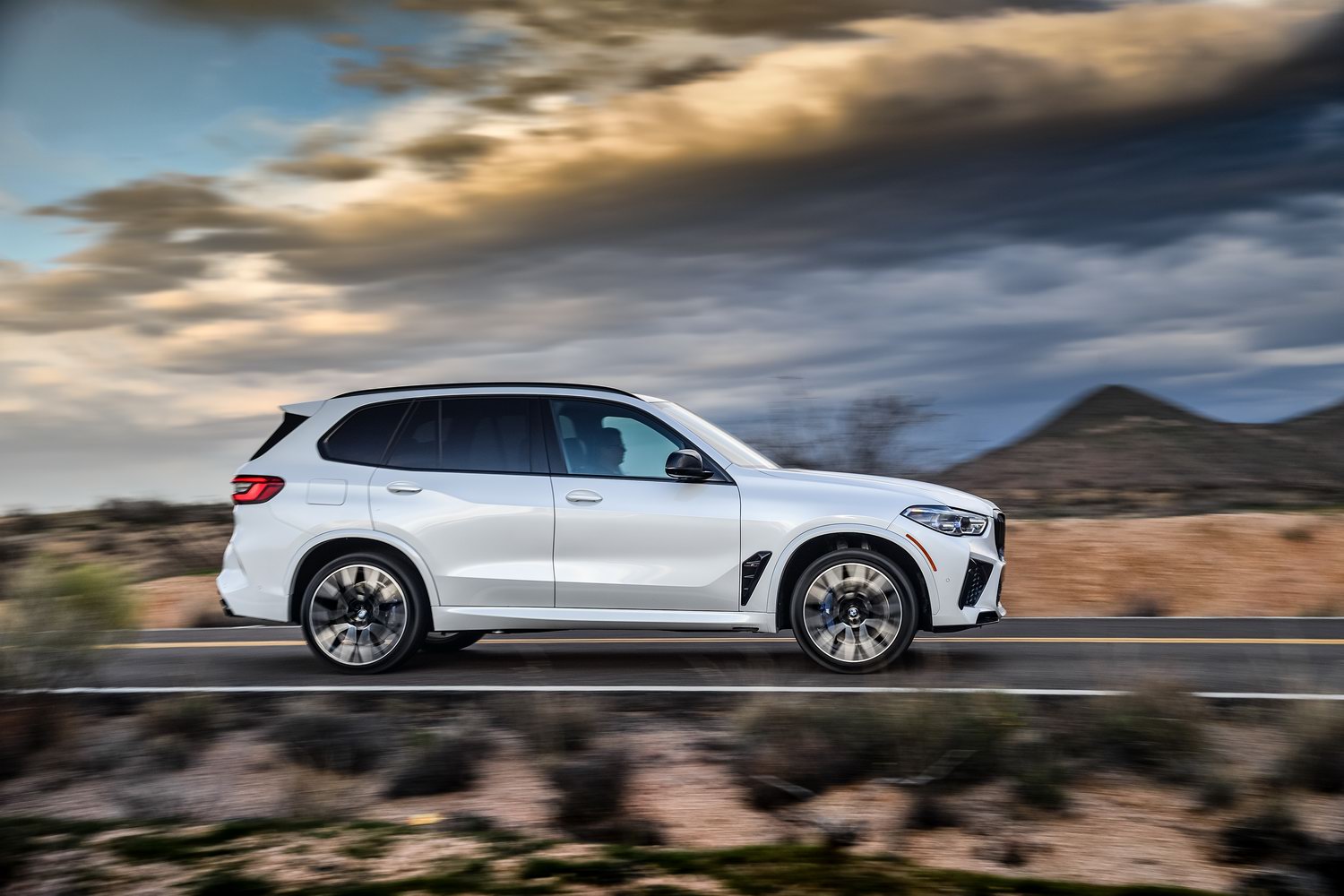 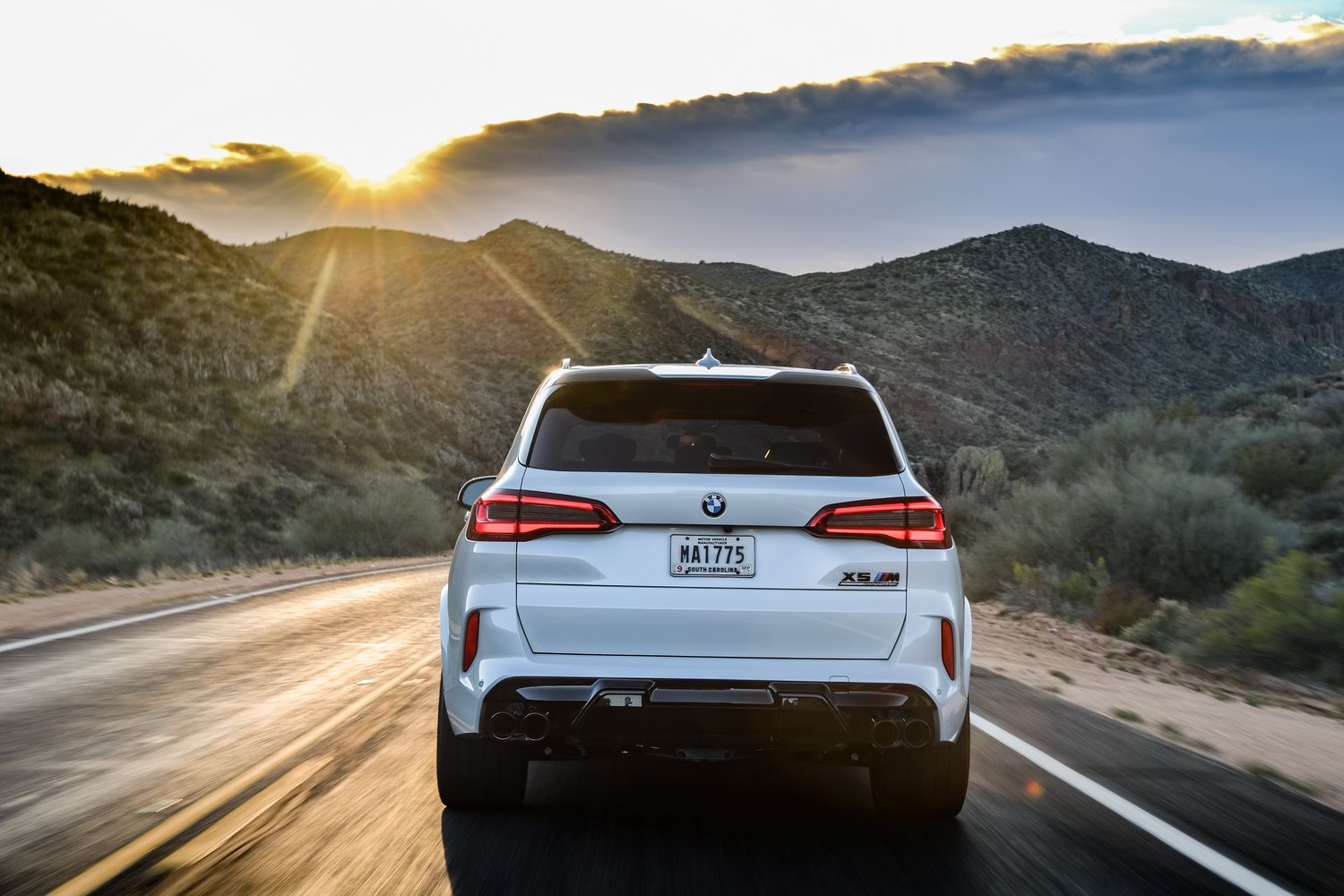 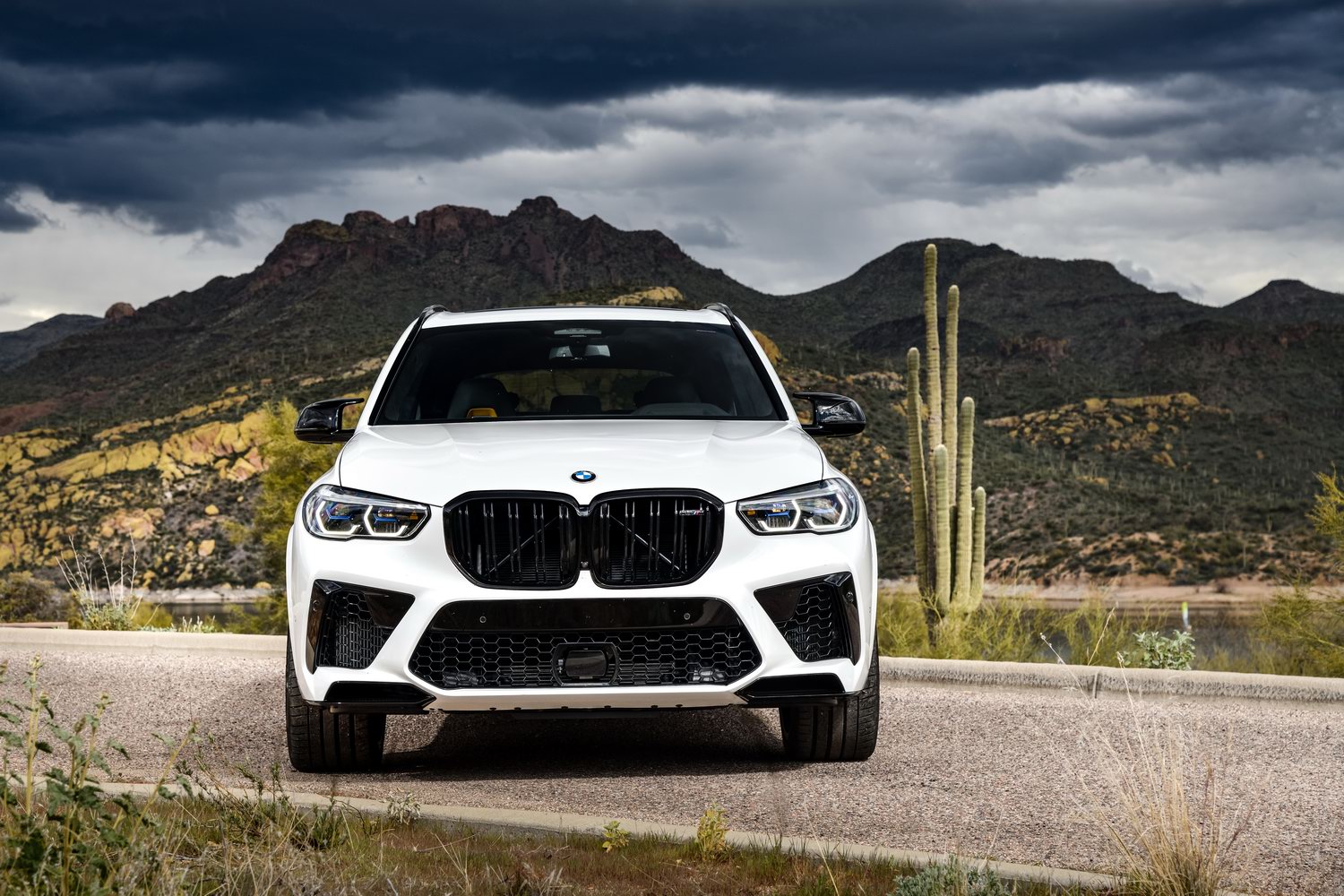 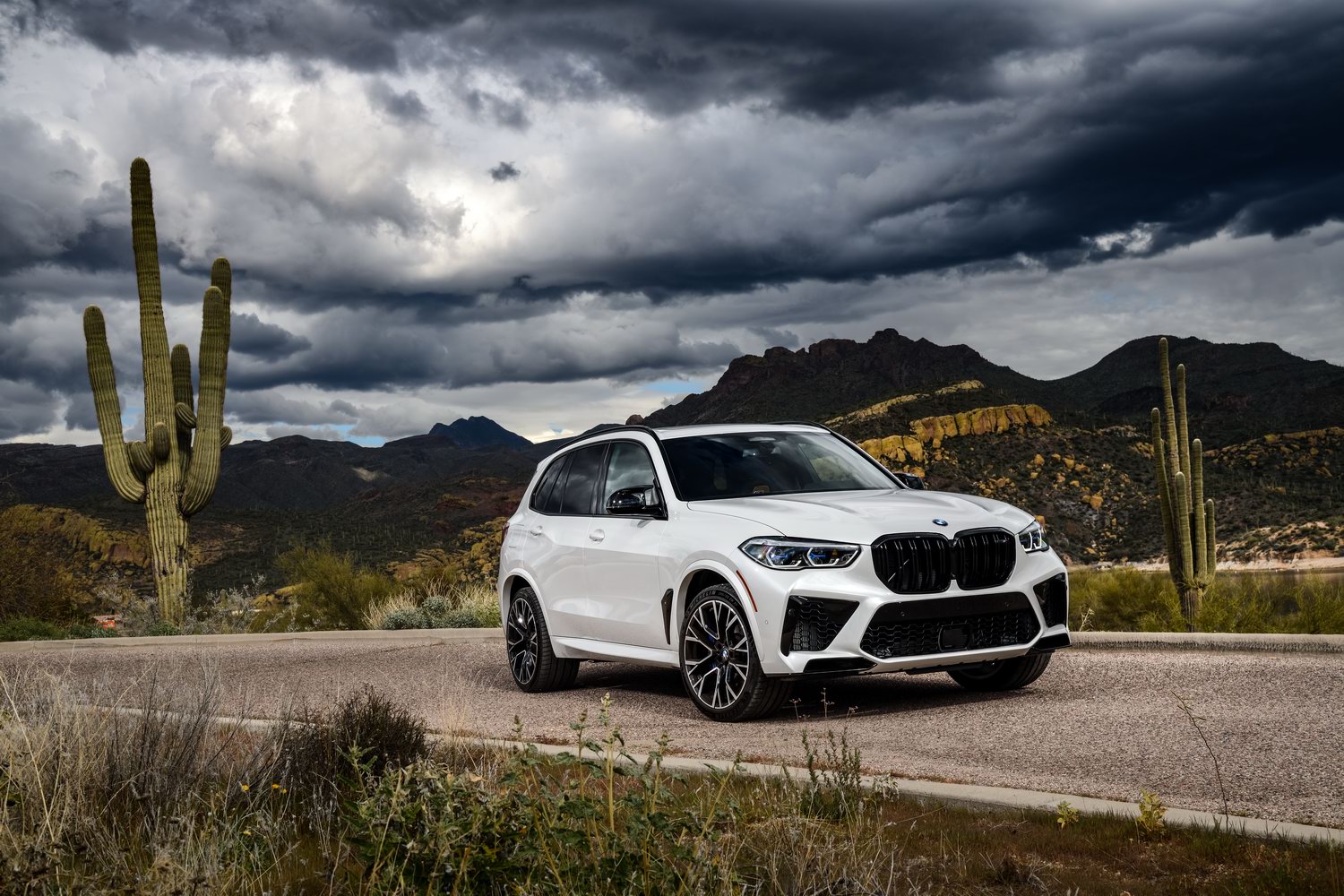 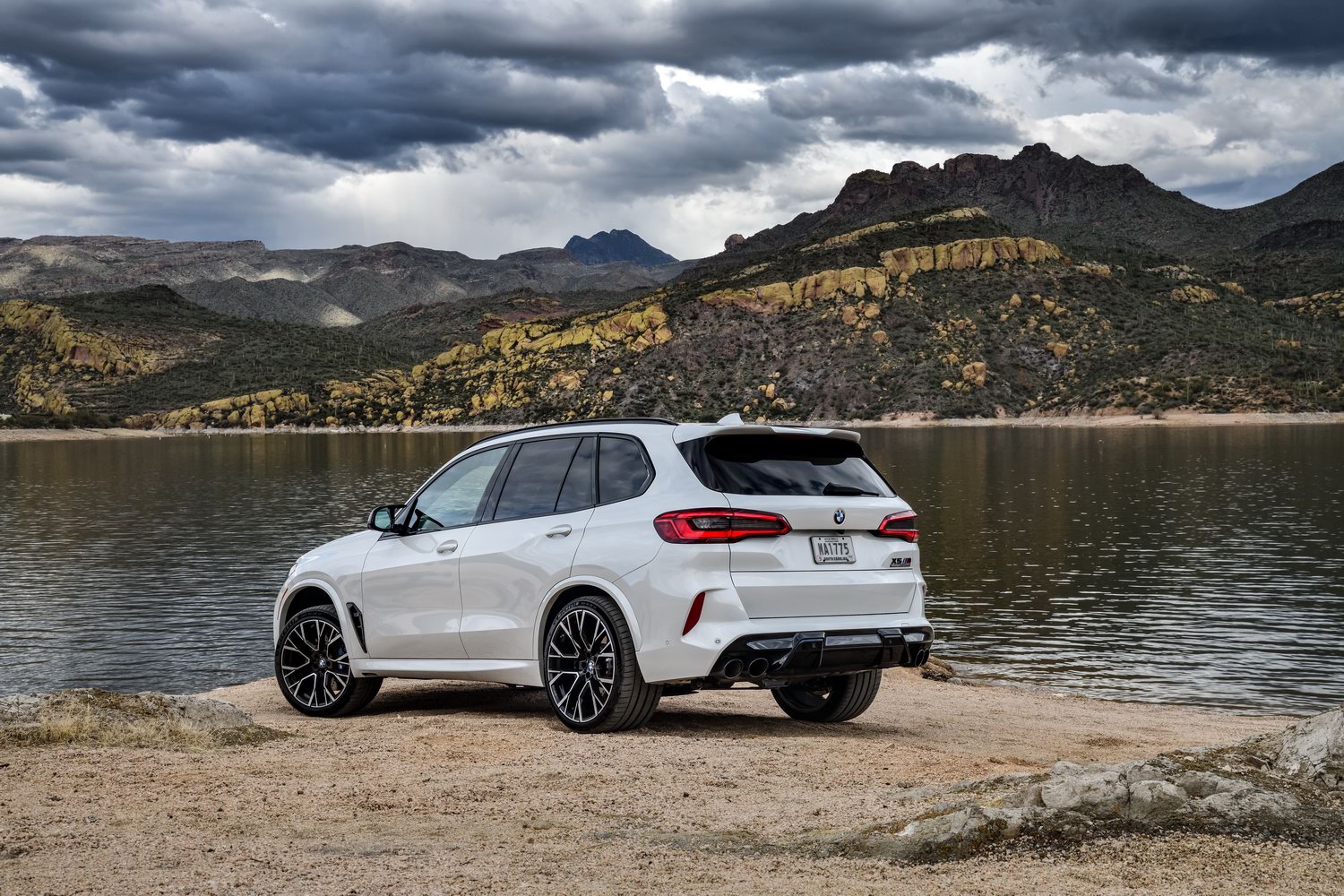 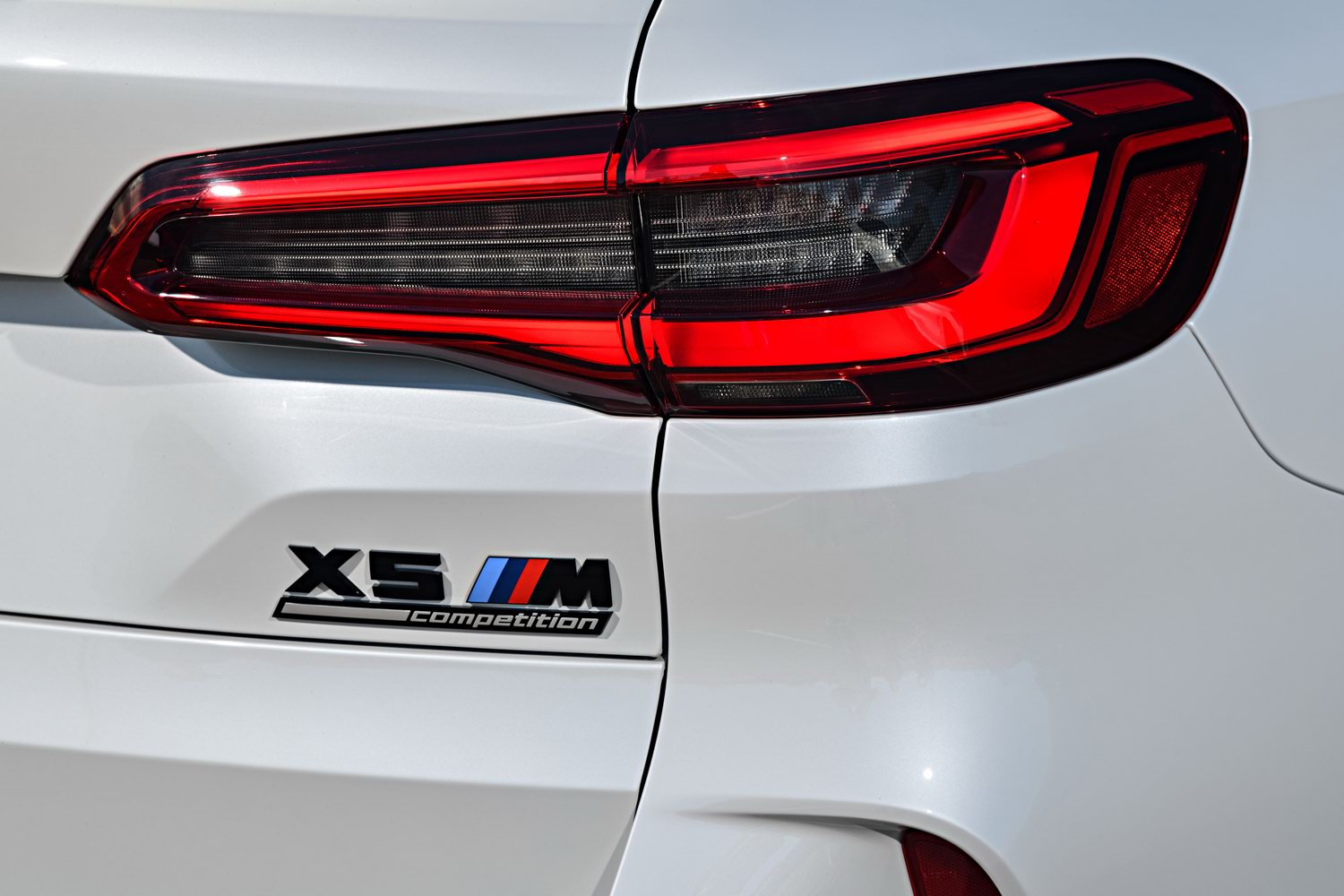 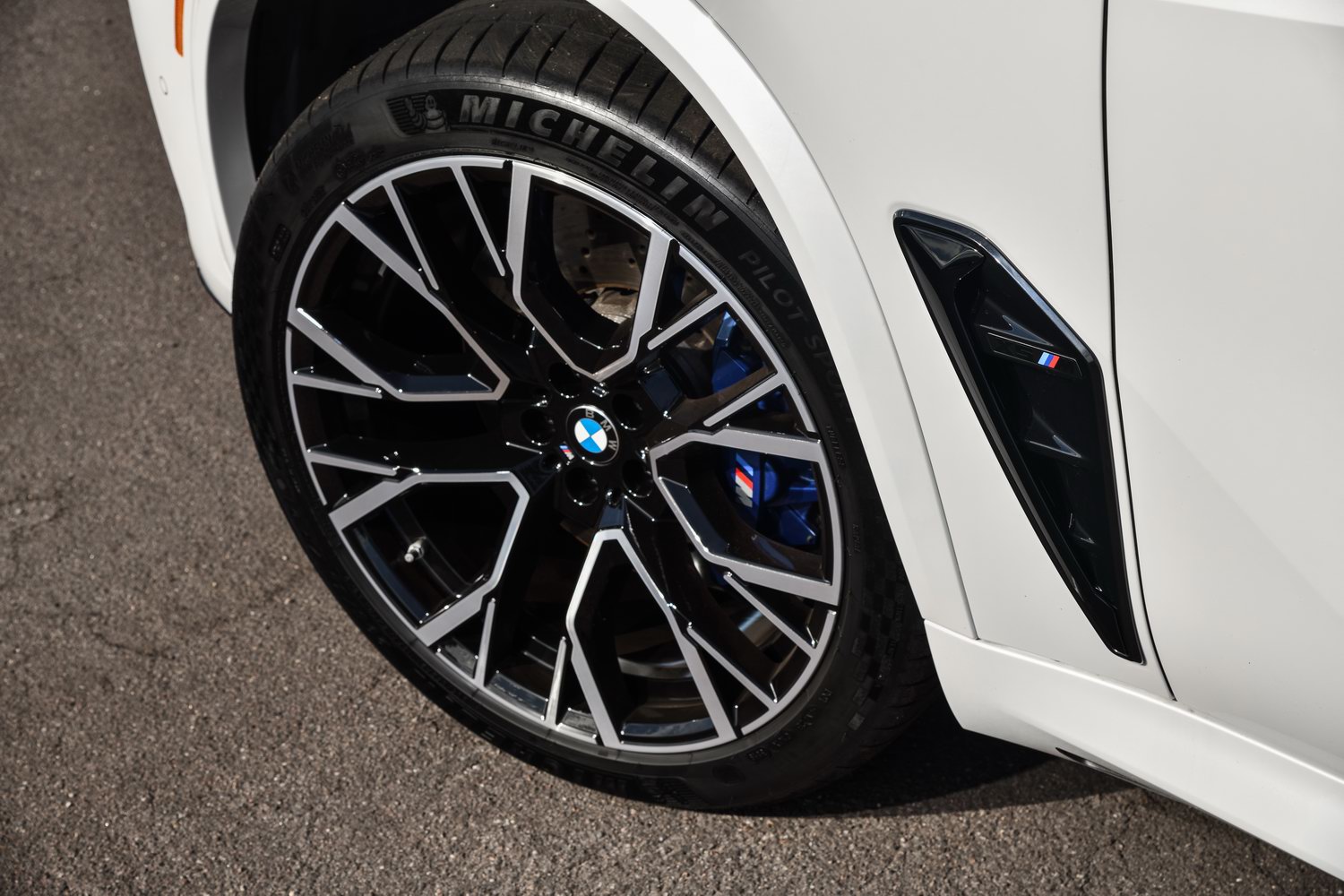 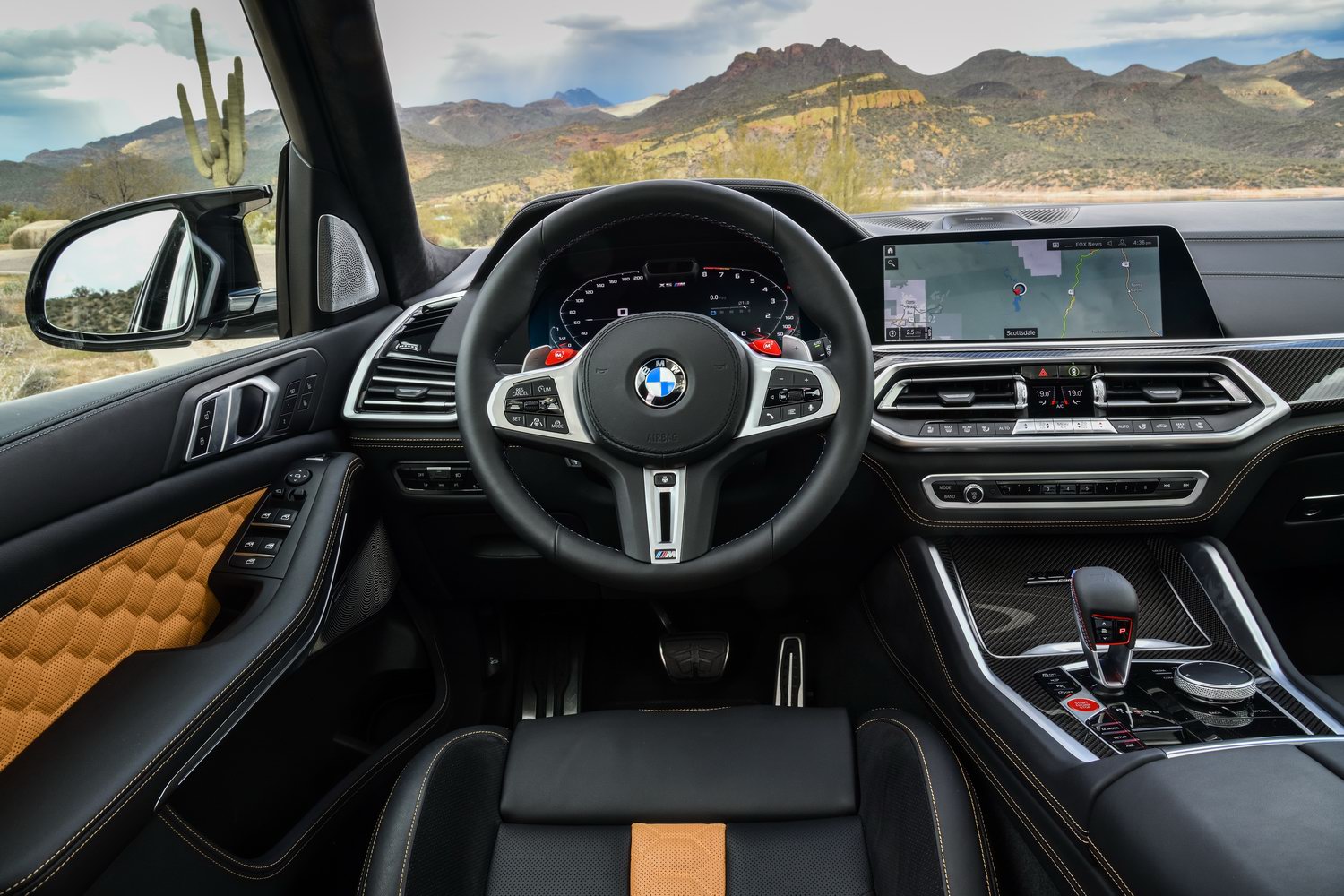 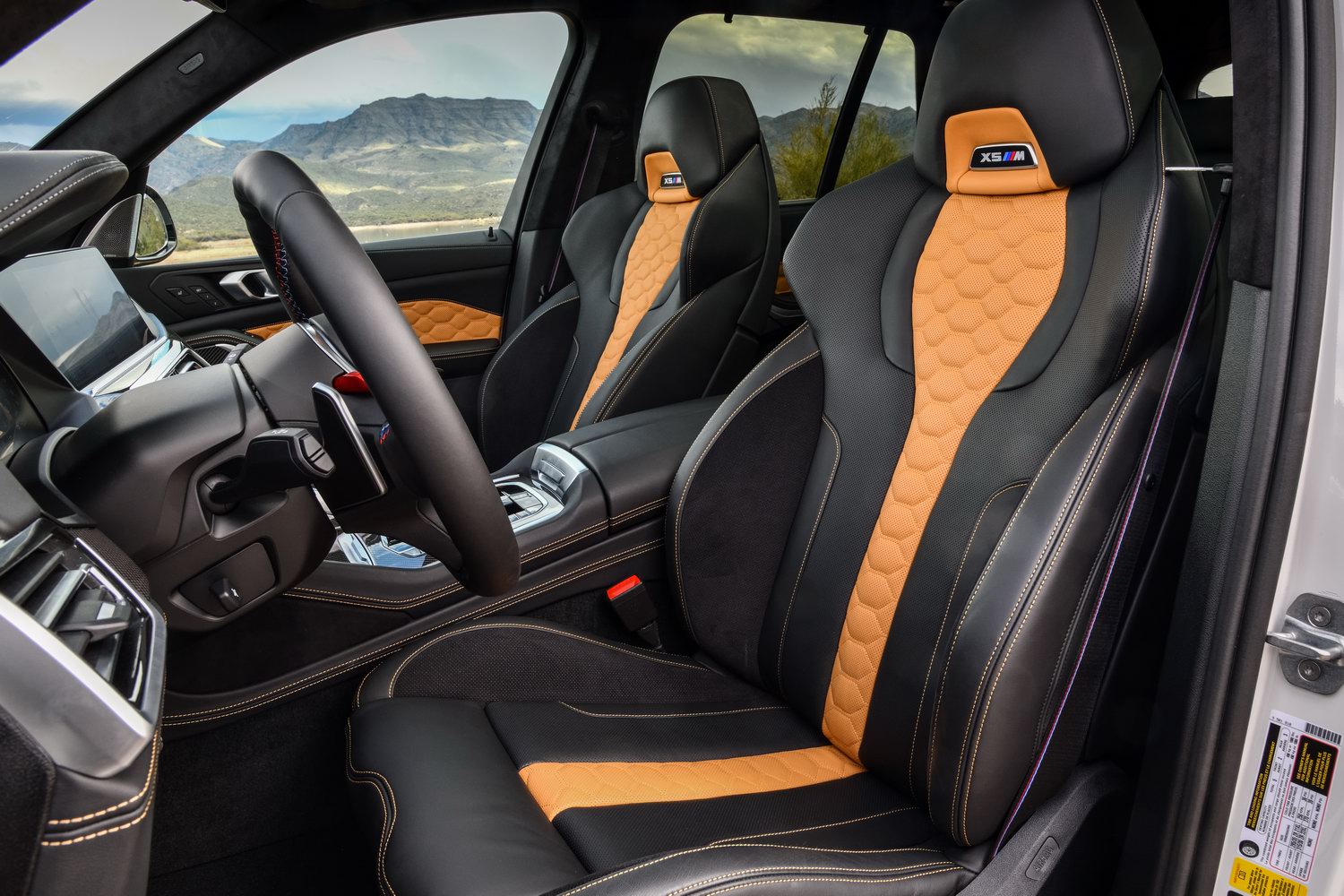 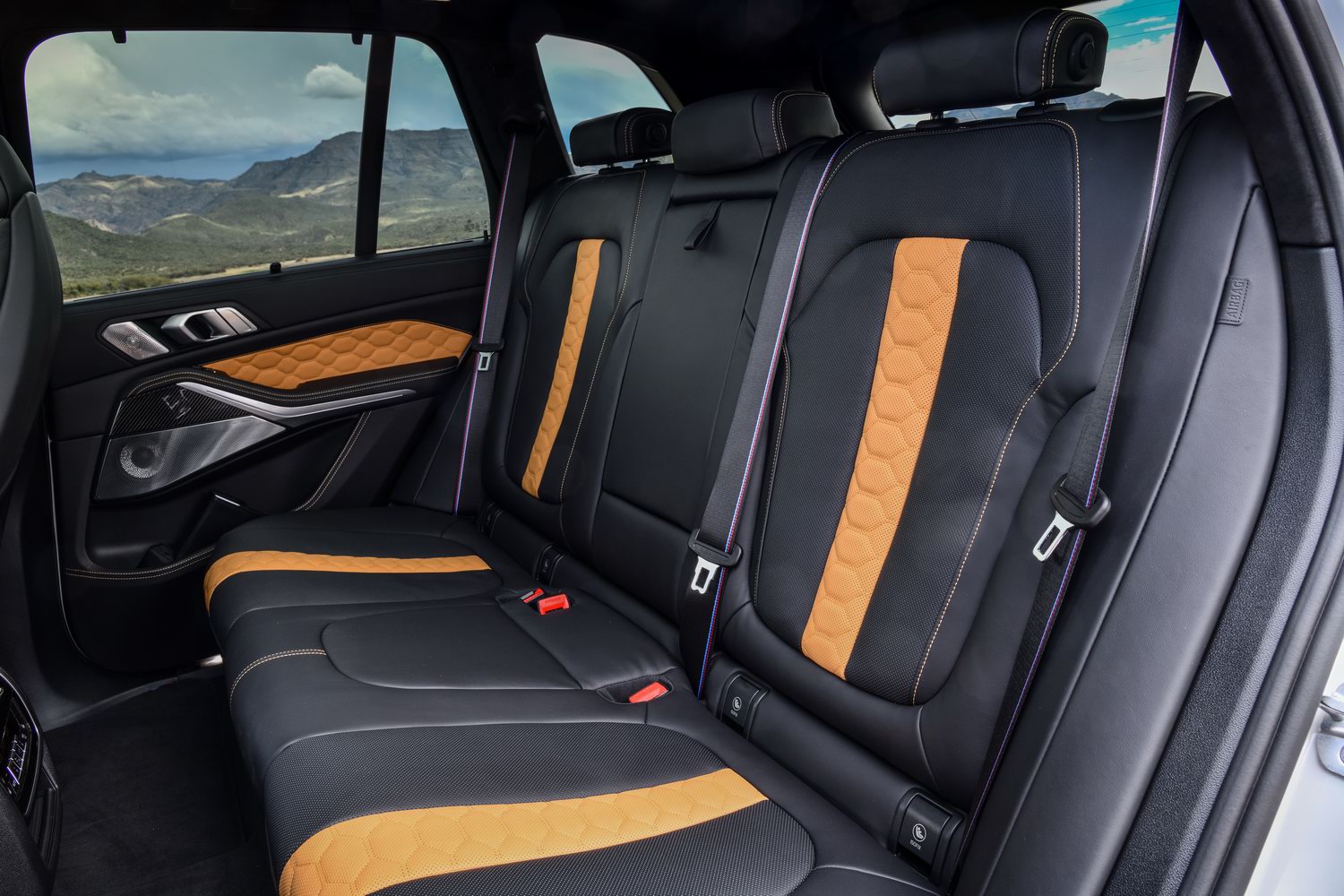 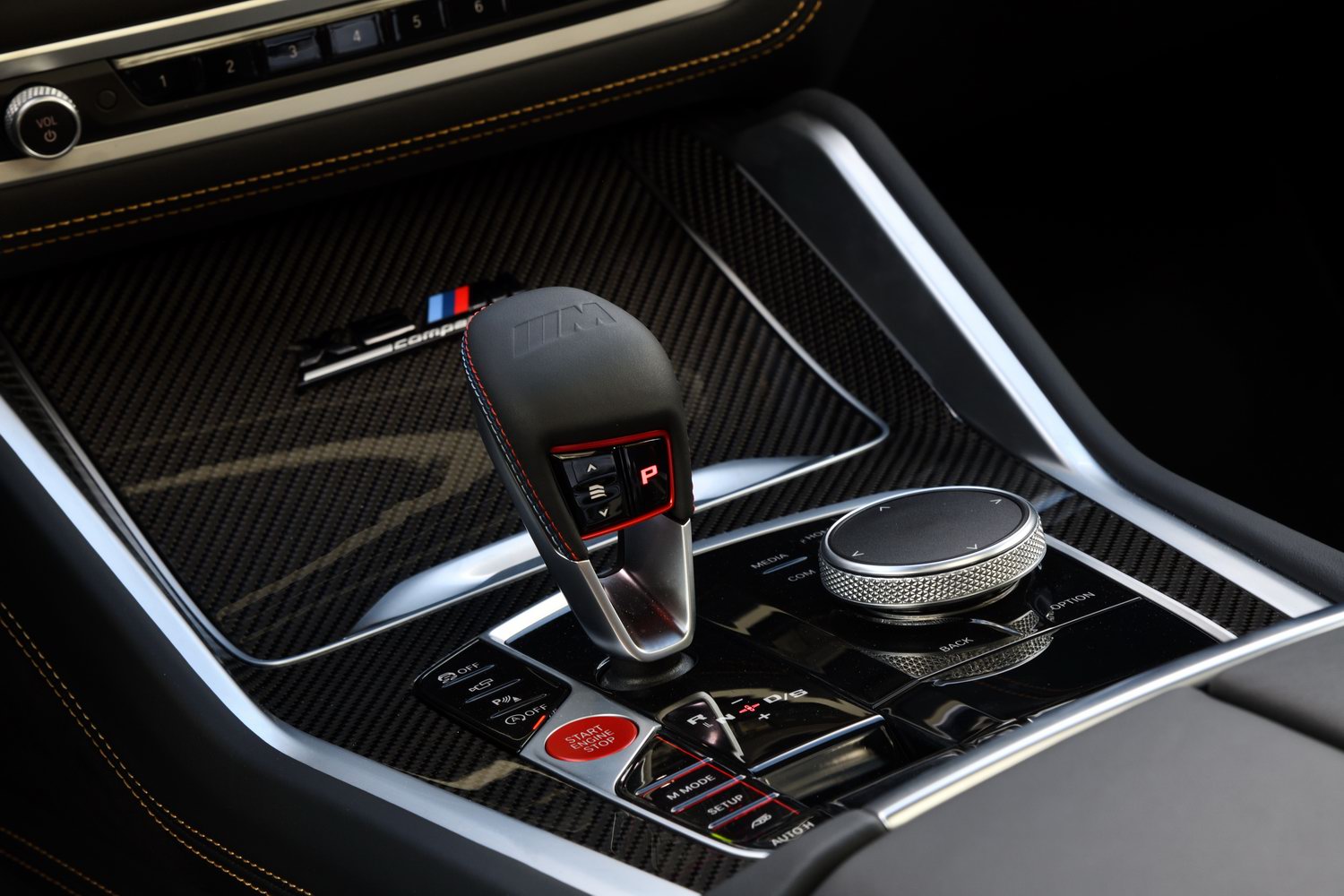 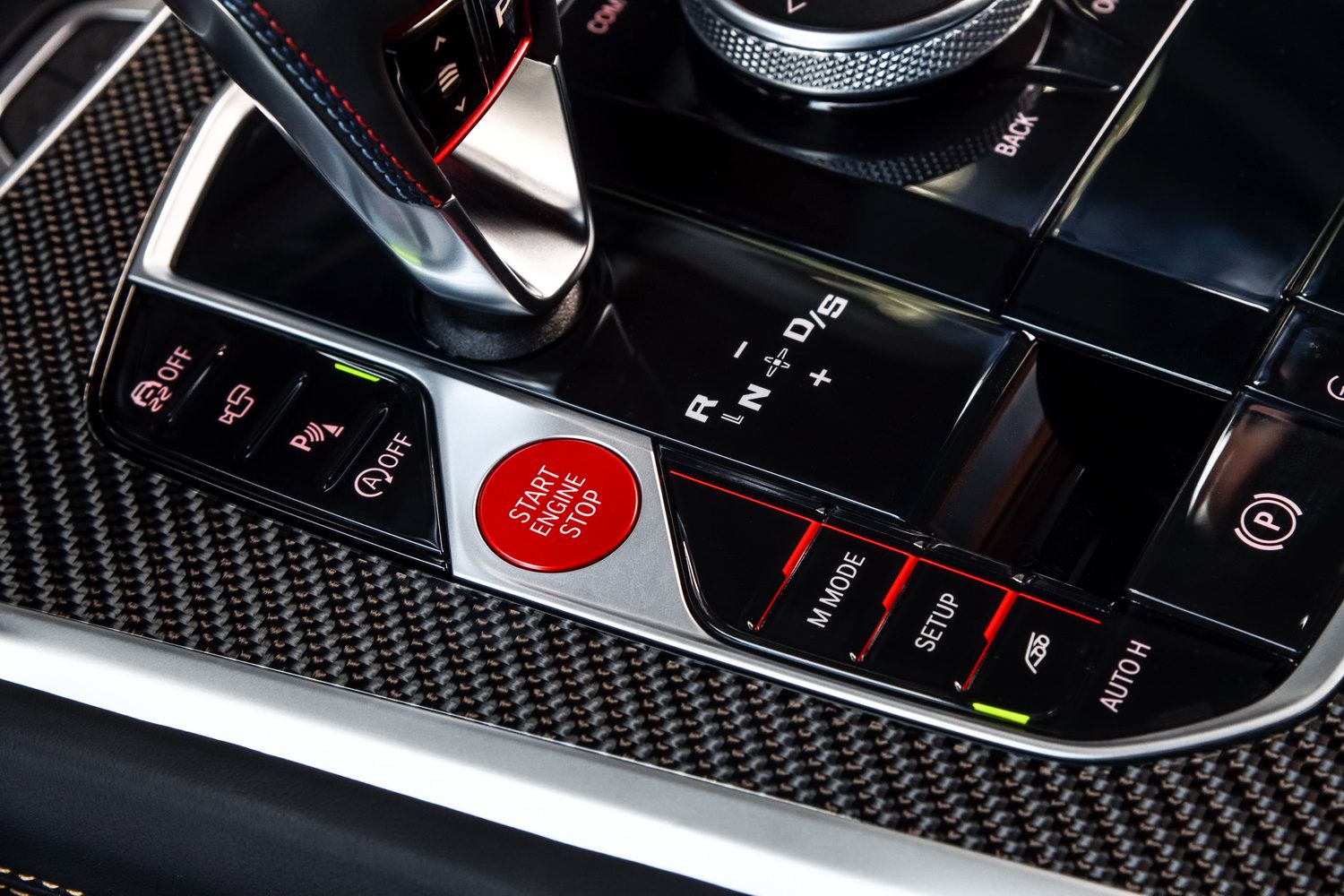 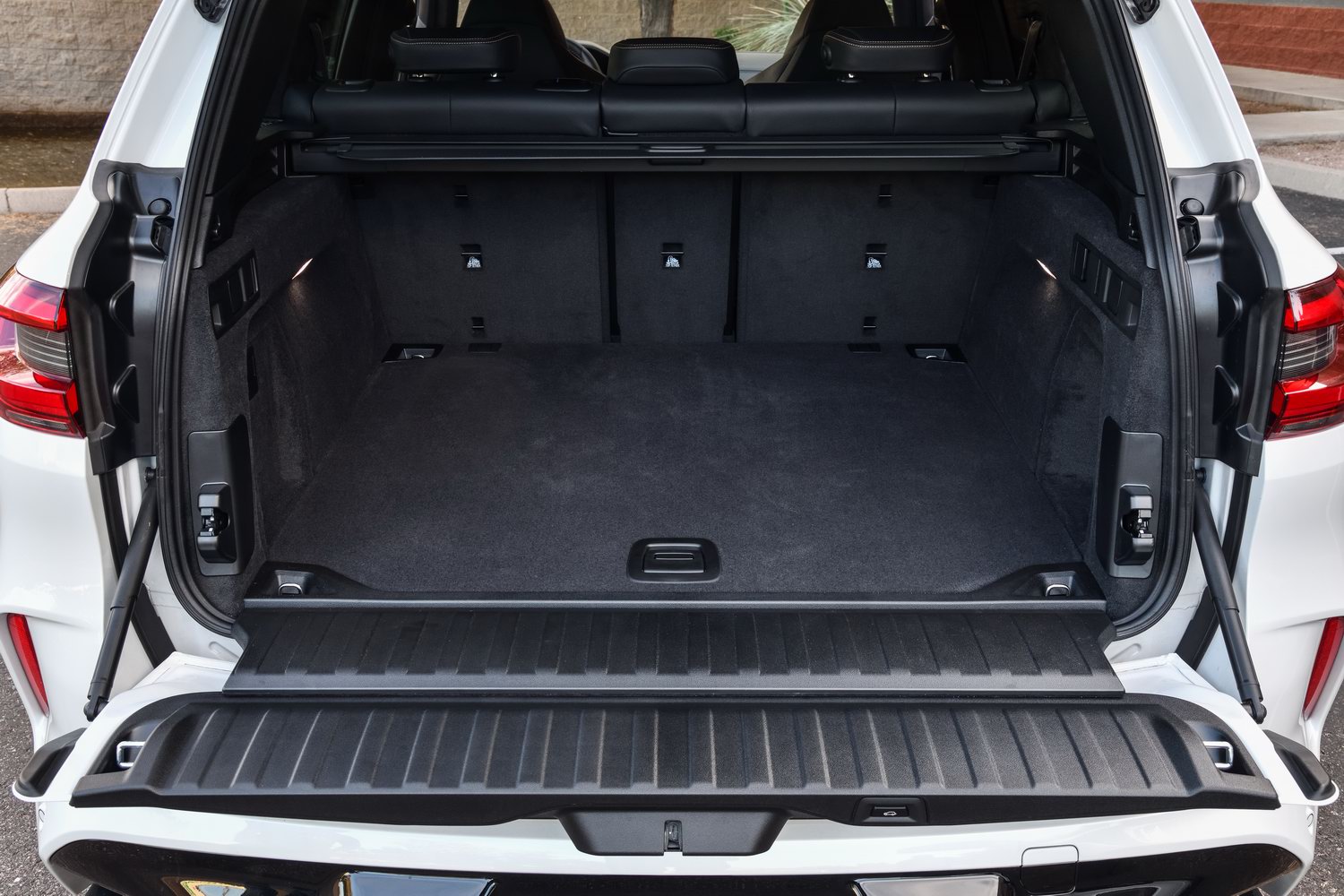 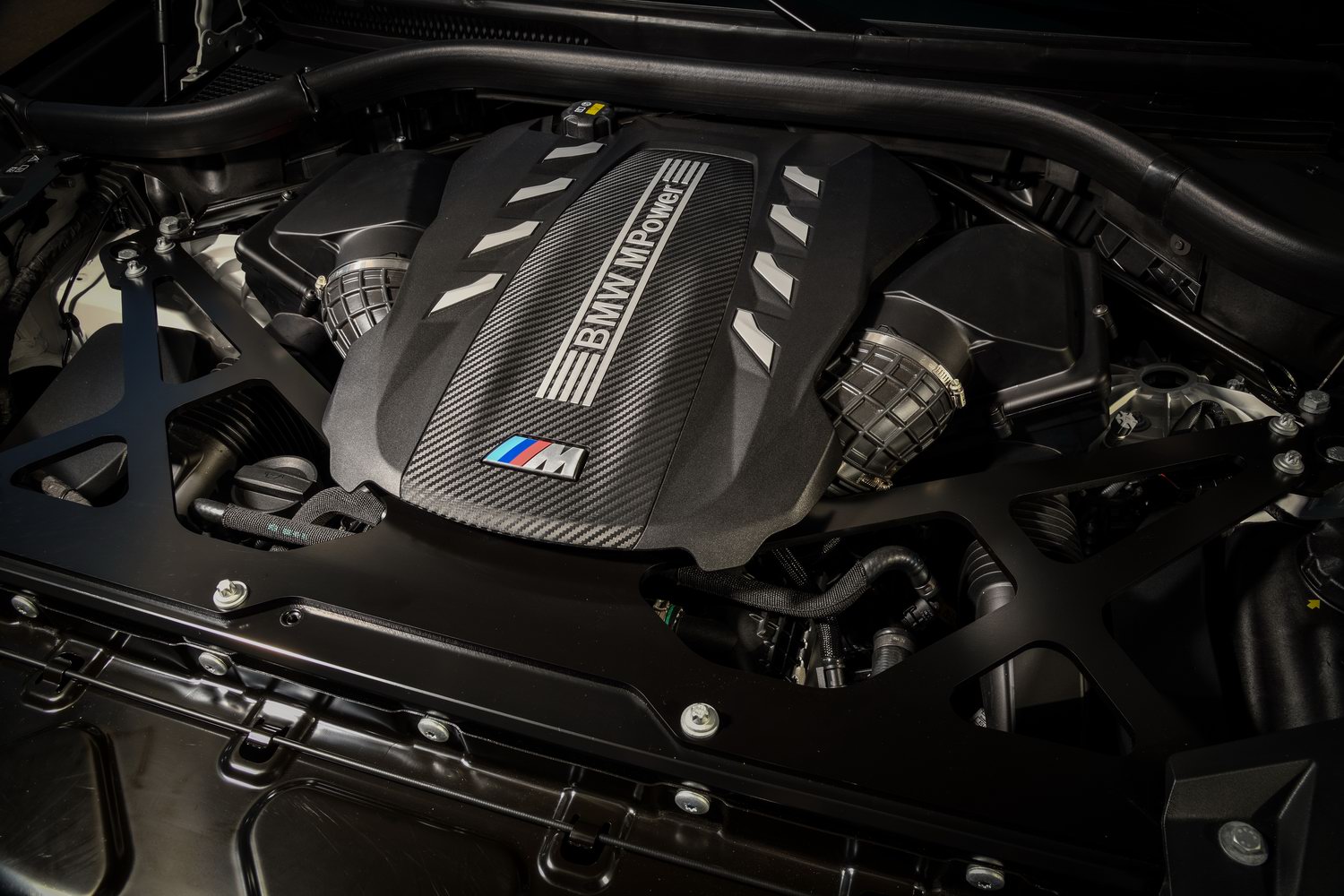 BMW's latest mega-power SUV is here, this being the third outing for the X5 M. It is produced in two different power outputs but Irish buyers are only offered the most potent version, called the Competition, with a 625hp biturbo V8. How does this big super-SUV stack up against its rivals?

In the wake of some of BMW's more challenging recent designs, and also the fact that there's an X6 analogue of this very car, then the X5 M Competition immediately goes in as one of the manufacturer's better-looking creations. Based, as it is, on arguably BMW's tidiest SUV design in the form of the regular X5, this brutal version wears much of the addenda you'd expect of an M Competition model. So there's lots of black detailing, which can be found on the aerodynamic door mirrors, the double-vane kidney grilles, for all of the external badging, and for the window surrounds and roof rails. There's a prominent roof spoiler mounted at the back, a BMW M's requisite quad-exit exhaust pipes, 21-inch front and 22-inch rear alloy wheels, side breathers in the front wings, a big rear diffuser and body-coloured wheel arch extensions too. All told, it makes for a suitably aggressive, if not overblown SUV. We like it.

Moving inside, we're still struggling with the 'much of a muchness' aesthetic that BMW insists upon for all of its interiors. It's ergonomically brilliant, of course, with a great seating position and a thoroughly intuitive layout of the switchgear, but an X5 M's cabin looks much like a 2 Series Gran Coupe's cabin looks like an 8 Series' cabin looks like a Z4's cabin. It's the same Live Cockpit Professional digital instrument cluster (which some folk don't like, given the polygonal shapes it renders for the dials), the same BMW Operating System 7.0 with its iDrive controller, the same climate controls and air vents. This homogeny is useful if you're leaping from BM to BM, as you know exactly where everything is and how it works, but it might be nice if the upper levels of BMW's product portfolio got a slightly more interesting and eye-catching dashboard sculpture to make them feel a significant step above the likes of the 1 Series and X1.

Naturally, some of the M Competition's own detailing does help to lift the ambience somewhat. The M steering wheel with its red M1 and M2 configuration buttons is nice (and not massively oversized in terms of the rim, either), the M multifunction seats with integral head restraints and the hexagonal stitching pattern are particularly appealing, all of the dashboard's upper fascia is swaddled in Merino leather and there are swathes of carbon fibre to behold, with a black 'X5 M Competition' logo sitting on the moveable cover for the centre console storage. The driver also enjoys M-specific displays in the instrument cluster and an M head-up display as standard, which further enhances the top X5's credentials.

This is some powertrain, there's no doubt about that. It's the 4.4-litre twin-turbo V8 as seen in the M5 Competition and the M8 Competition, delivering its robust peaks of 625hp and 750Nm through an eight-speed M Steptronic auto to all four wheels, via both M xDrive all-wheel drive and an Active M Differential at the back with a 0-100 per cent locking range. However, unlike its M5 and M8 relations, there is no two-wheel-drive function to the M xDrive fitted to the X5 M; it is permanently in four-wheel-drive, albeit this is an all-corners system with a rear bias that you can step up even further in 4WD Sport mode.

What's most pleasing about this drivetrain's application in the X5 M is that it sounds better than we remember it in the M5. Where the supersaloon is somewhat muted and discreet, the X5 M always sound angry and up for the fight. This fantastic soundtrack therefore only emphasises the eye-widening performance. There is little doubt of the X5 M Competition's potency when you're behind the wheel, because even in its slackest Comfort setting, the lag-free engine will hook up quickly through the exemplary gearbox and then flood all four tyres with every last ounce of torque. Thus, the 0-100km/h time of 3.8 seconds and the even more remarkable 0-200km/h time of 13.4 seconds are entirely believable, while the optional 290km/h limiter makes you wonder what the X5 M Competition might be capable of if relieved of electronic nannies entirely - 300km/h? Maybe even 320km/h? Who knows?

These performance stats are set against the context of the X5 M Competition weighing a portly 2,385kg. BMW has done much to the underpinnings of the SUV to get it to cope with the power and to handle like a true M should, so there's an extensive package of measures to enhance the stiffness of the body structure and the suspension mountings, there's M-specific electronically controlled adaptive dampers, there's active roll stabilisation, there's M Servotronic steering and M-calibrated stability control software, there are M compound brakes with six-piston front callipers and 395mm discs (with single-piston floating callipers and 380mm discs at the back)... in short, the X5 M Competition has an extensive electronic and mechanical armoury at its disposal, allowing it to get on with the task of going monstrously quickly, even when the roads turn twisty.

And it does this with some aplomb. BMW has done a magnificent job of getting the 625hp X5 to feel like a proper M car. Admittedly, it's one that prefers to corner more foursquare than with any real rear-axle interactivity, although you can just about control your line with nothing more than the throttle alone. Nevertheless, the way the X5 M shrugs off huge compressions and direction changes over crests is nothing short of extraordinary for a vehicle knocking on the door of two-and-a-half tonnes. It never quite lets you forget its mass, even with brakes that are truly brilliant, but there's a definite feeling that the X5 M will handle more cornering punishment than you'd give it credit for when looking at its frame. Or, put more succinctly, it's undoubtedly fun to drive it fast on a challenging section of road.

Where it falls down is on the ride quality. Grief, is this car firm. Like, ludicrously so. You notice it almost immediately with a low-speed patter permeating the cabin with the X5 M Competition in Comfort mode, so when you step it up into the Sport and Sport Plus settings, the damping becomes out-and-out jittery. There's elevated road-roar from the 295/35 ZR21 front, 315/30 ZR22 rear tyres, too, which doesn't help when the ride comfort is already testing your patience, and while the refinement of the rest of the X5's package is excellent, we reckon that punishing ride quality and constant tyre chatter would get on your nerves after a while. To the point that a far-smoother M50d model would probably be a preferable go-faster X5, in our eyes. Yes, the M Competition is undoubtedly the sharpest of all X5s to steer... but the lack of squish in the damping may well be its undoing.

At almost €190,000, the BMW X5 M Competition is clearly not the sensible choice in an SUV range that begins at far less than half that cash for the xDrive45e PHEV model. Obviously, as the flagship version, the M Competition has a lengthy standard kit list, including the full infotainment, the head-up display, leather upholstery, sports seats, a sports exhaust, 21-/22-inch alloys and the Parking Assistant, among much more, but there are still options beyond these - including further driver assist safety systems and the BMW Laserlight illumination up front - which could push the price to €200,000 and more...

The third BMW X5 M is undoubtedly the finest-handling example of this go-faster SUV we've seen yet and it certainly has the tools at its disposal to take on an ever-growing array of super-powered rivals from all manner of manufacturers. The Competition also has an epic drivetrain and handsome looks, but the firm ride quality is going to be a dealbreaker for some people - it's as simple as that. If you can live with the way it attempts to soak up minor lumps and bumps in the tarmac, this is probably the hyper-rapid SUV for you. 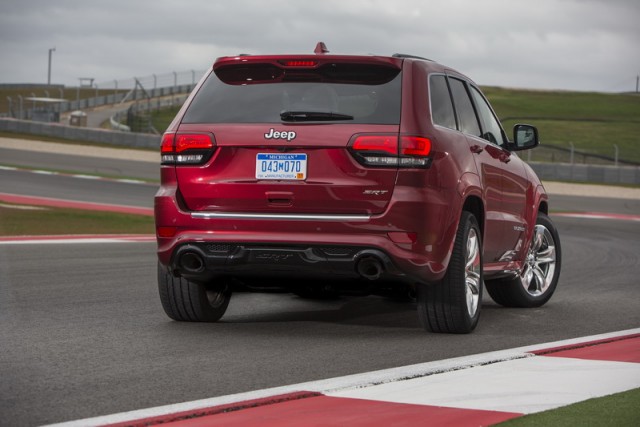 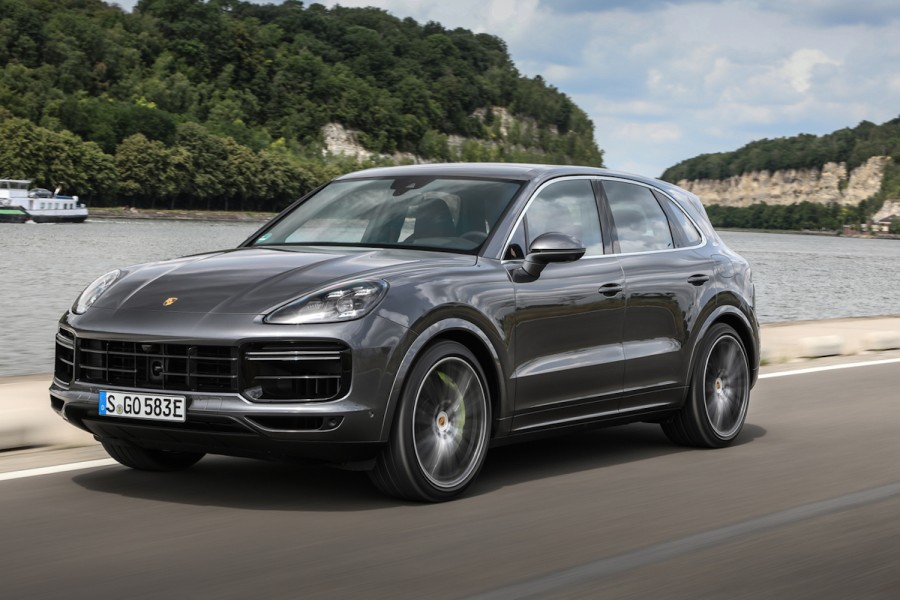 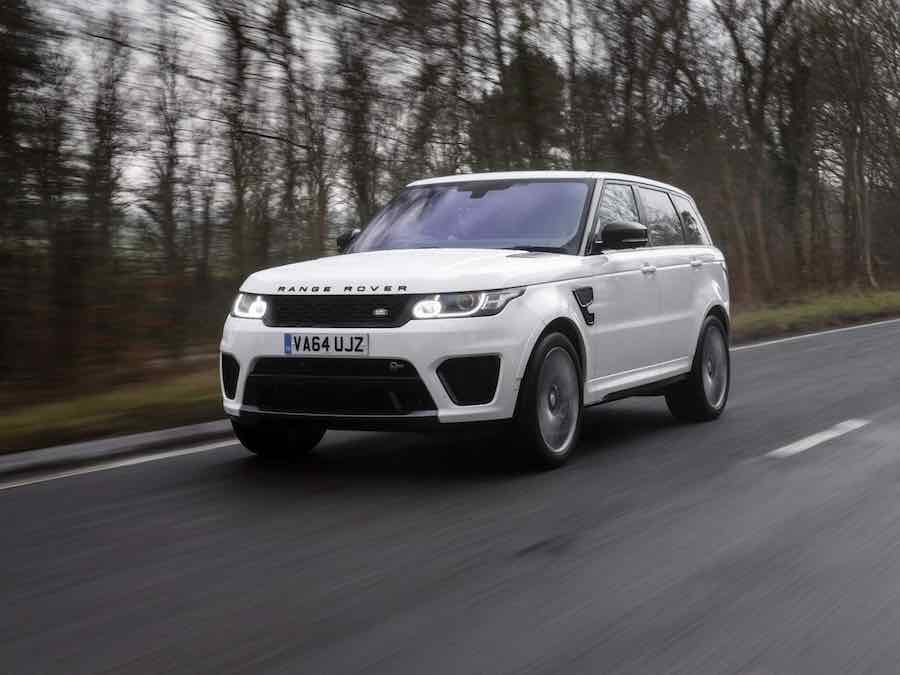