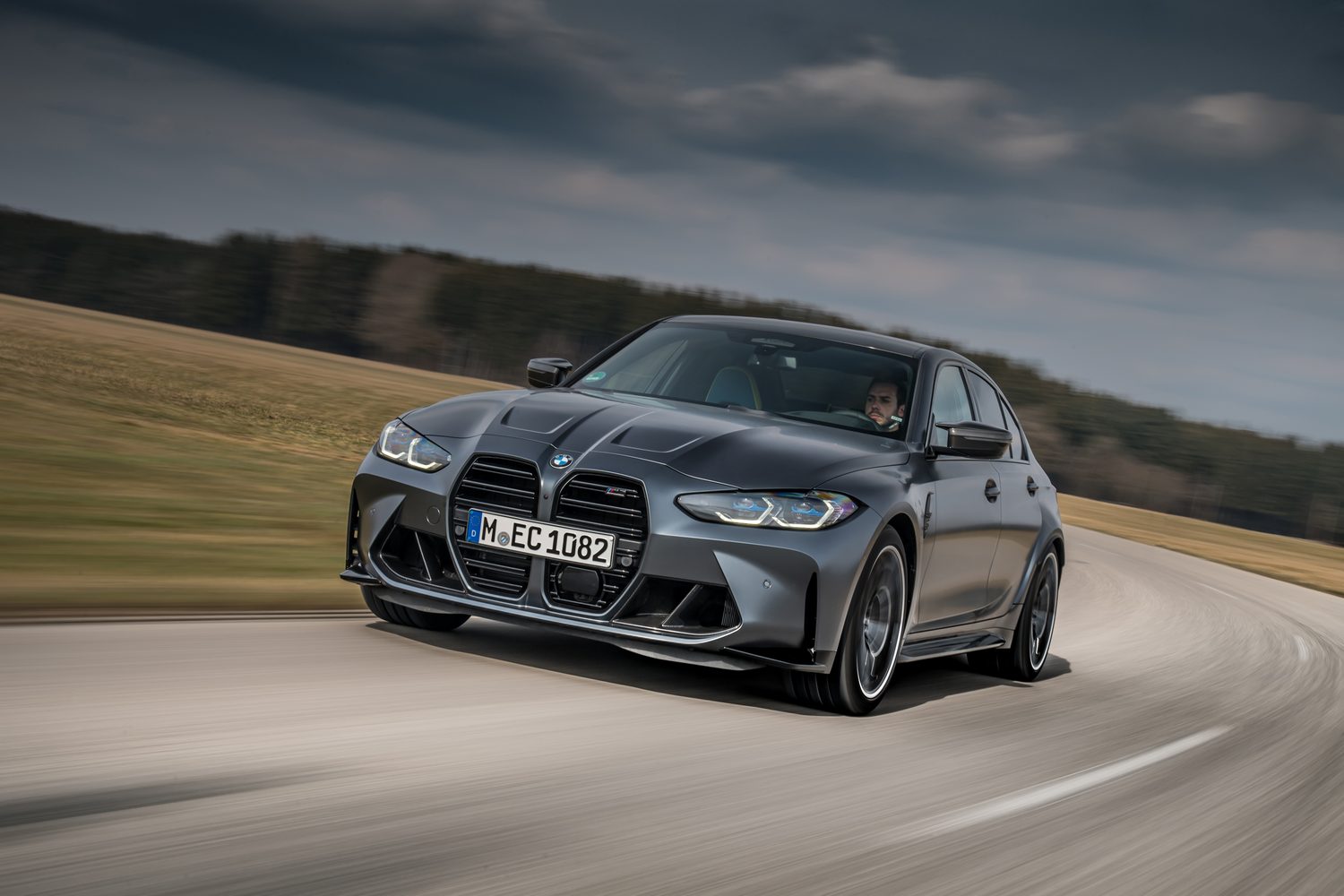 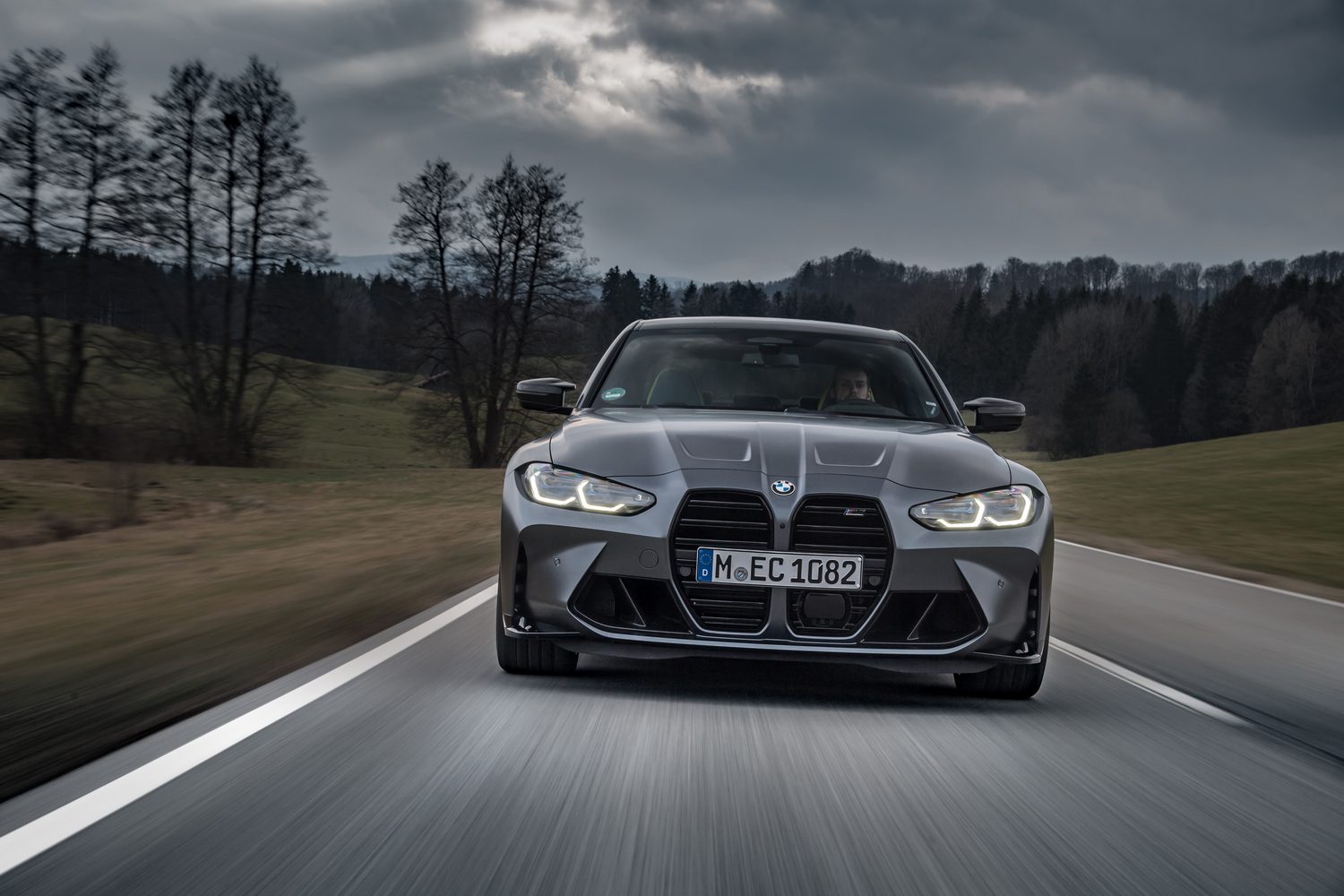 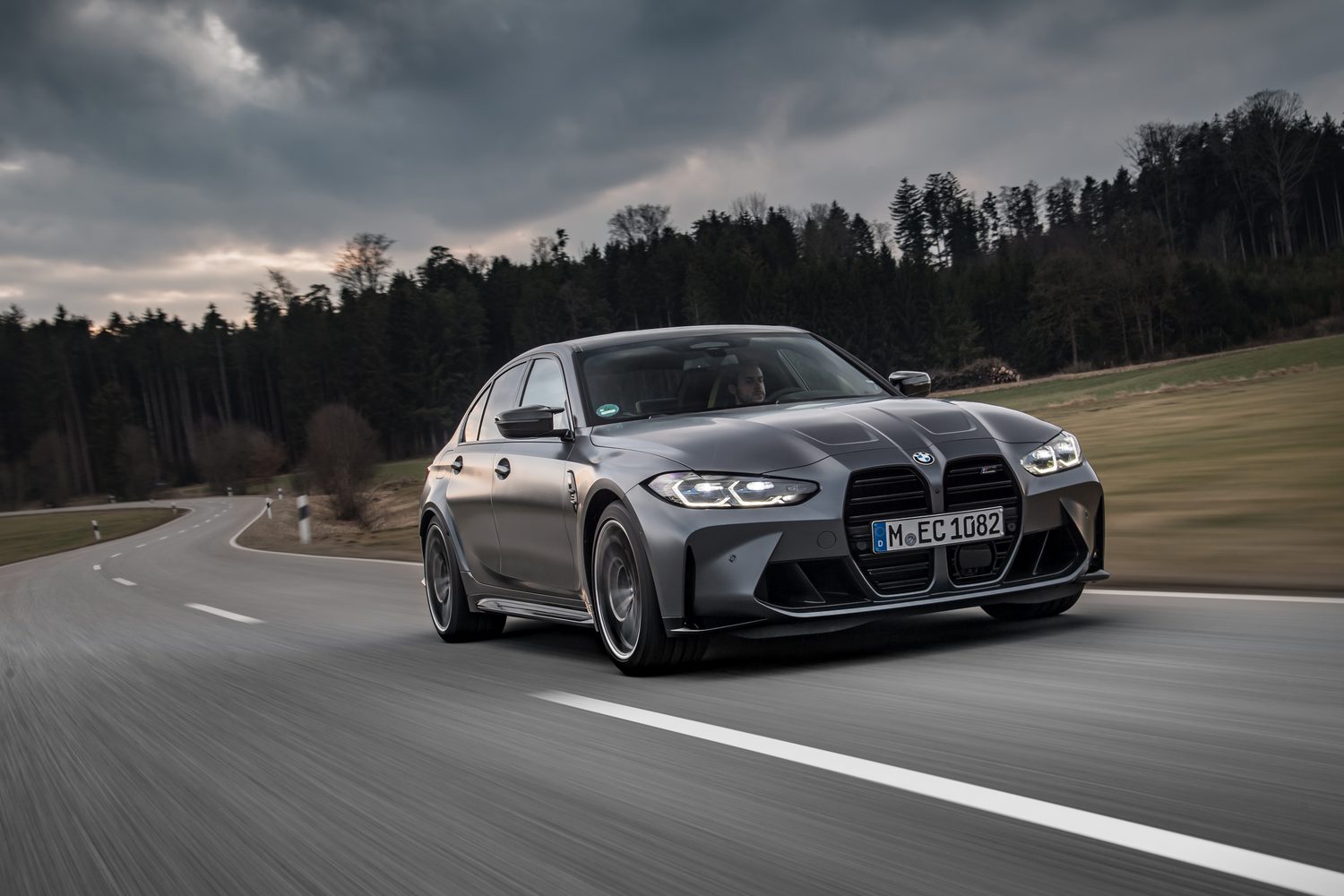 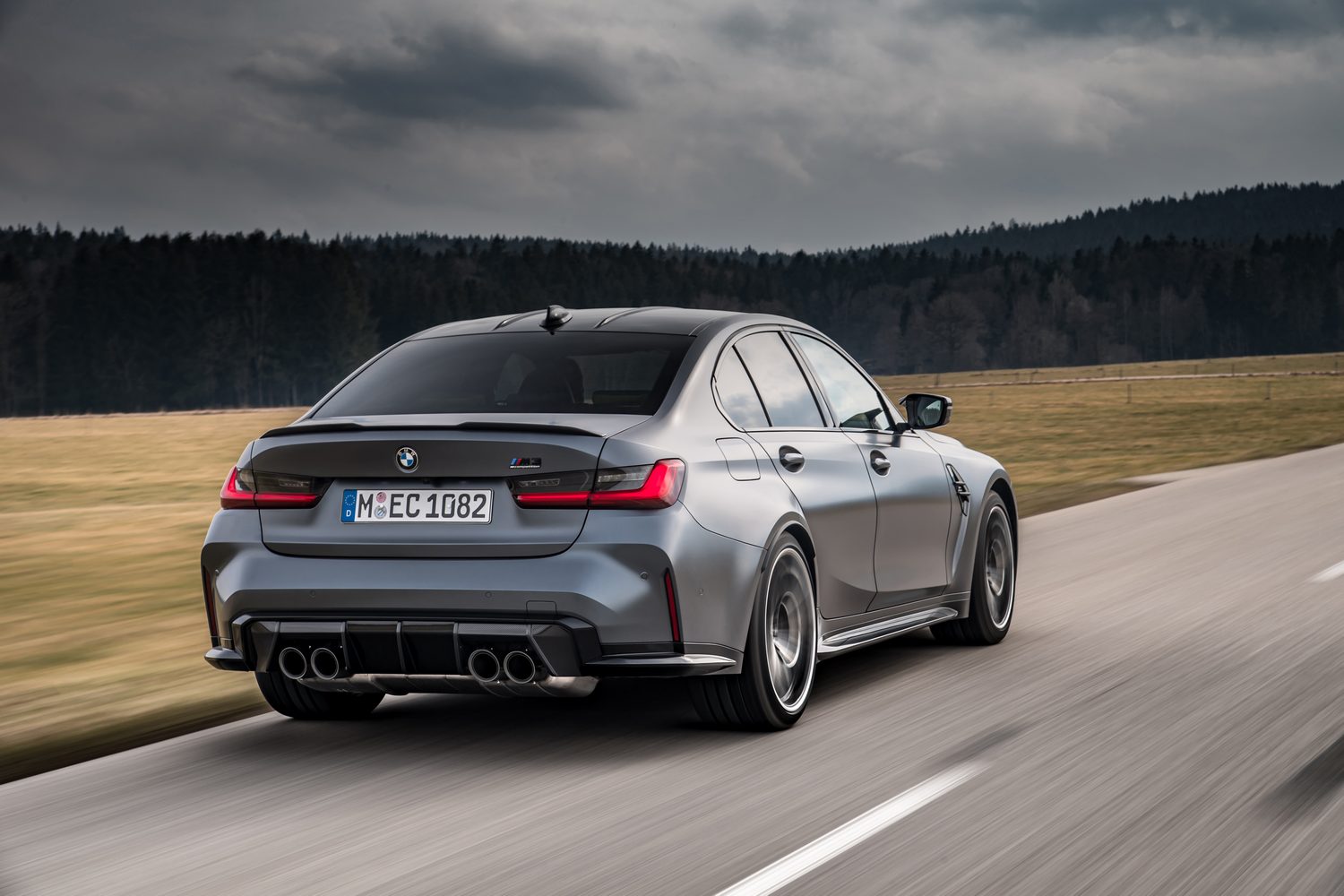 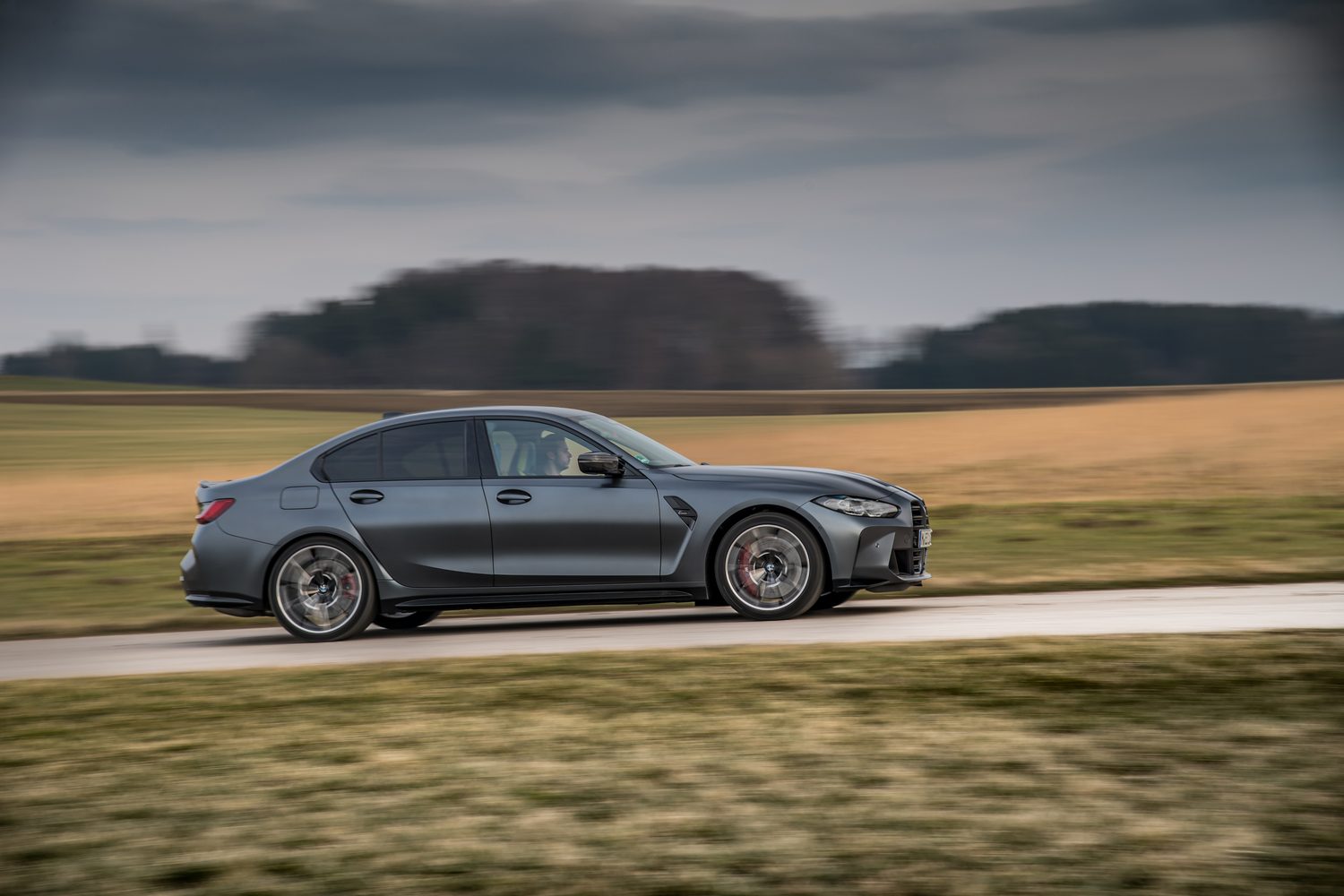 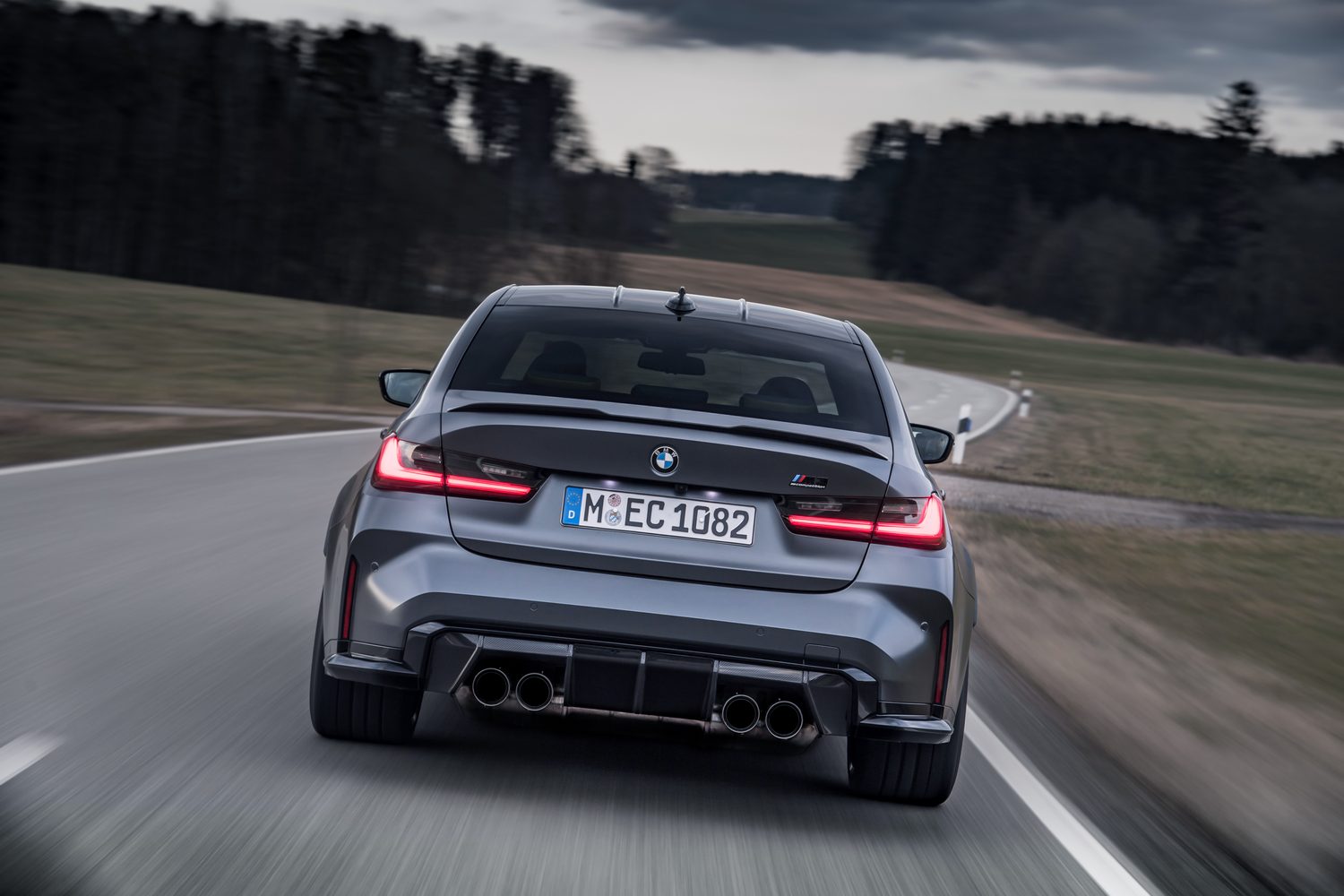 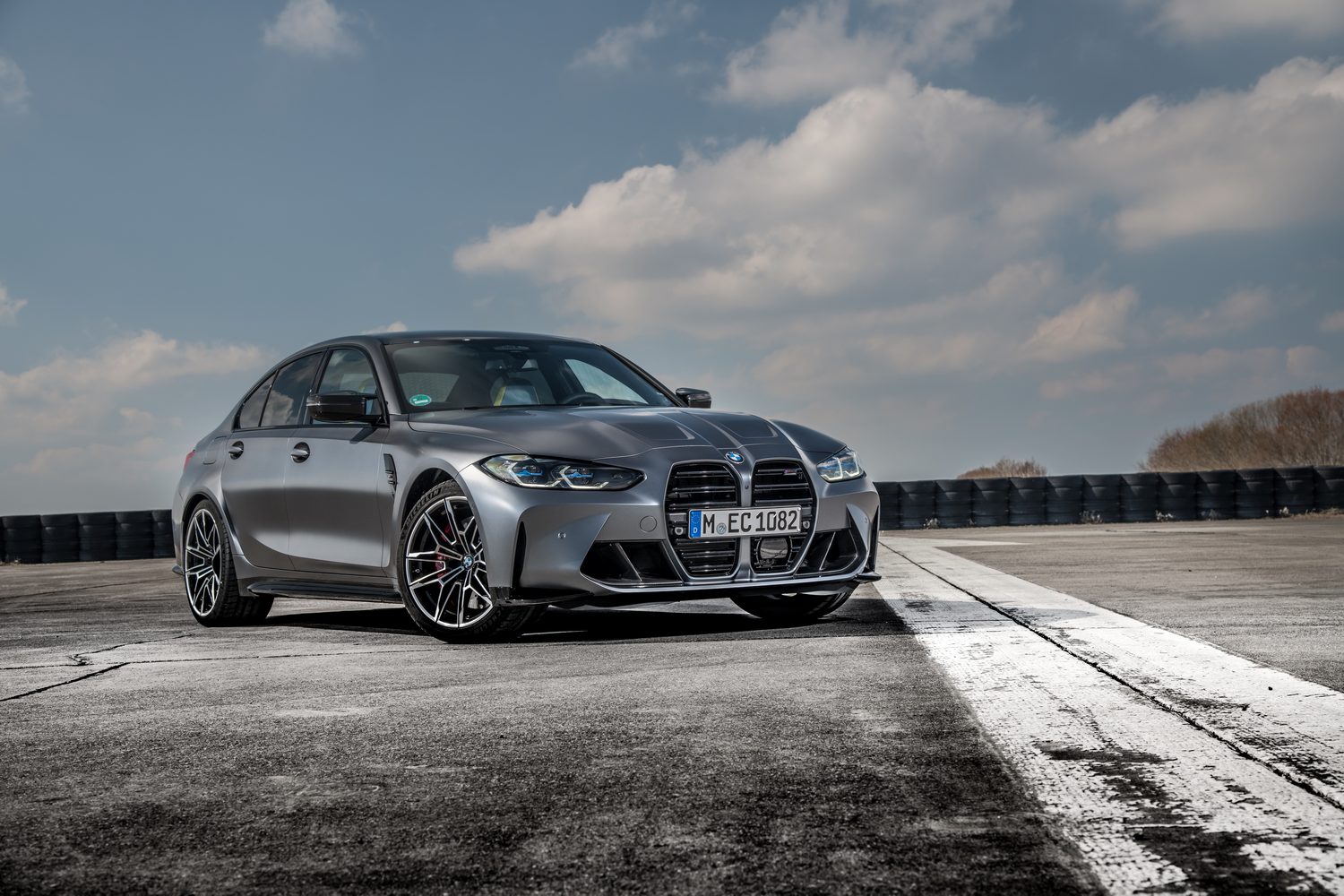 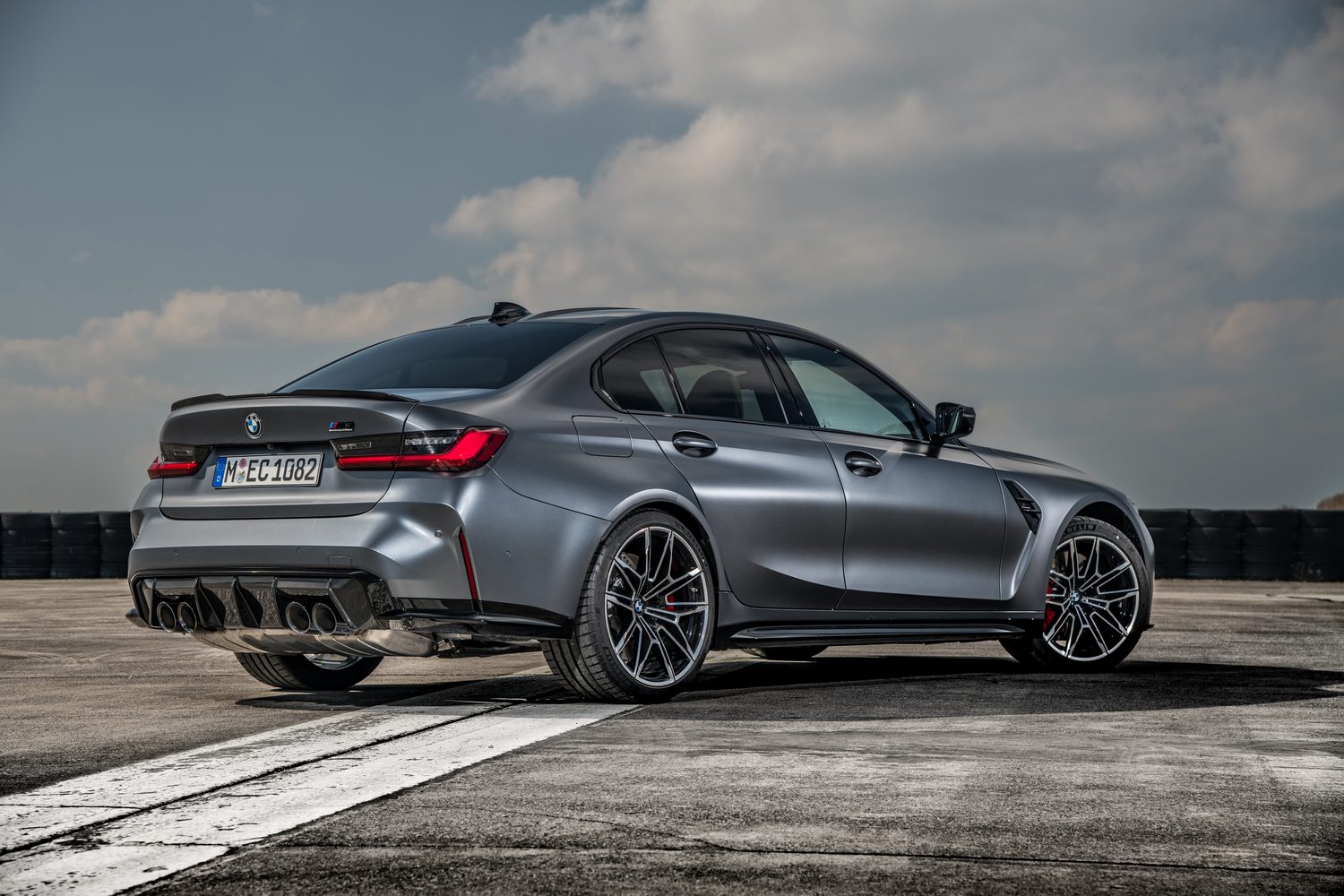 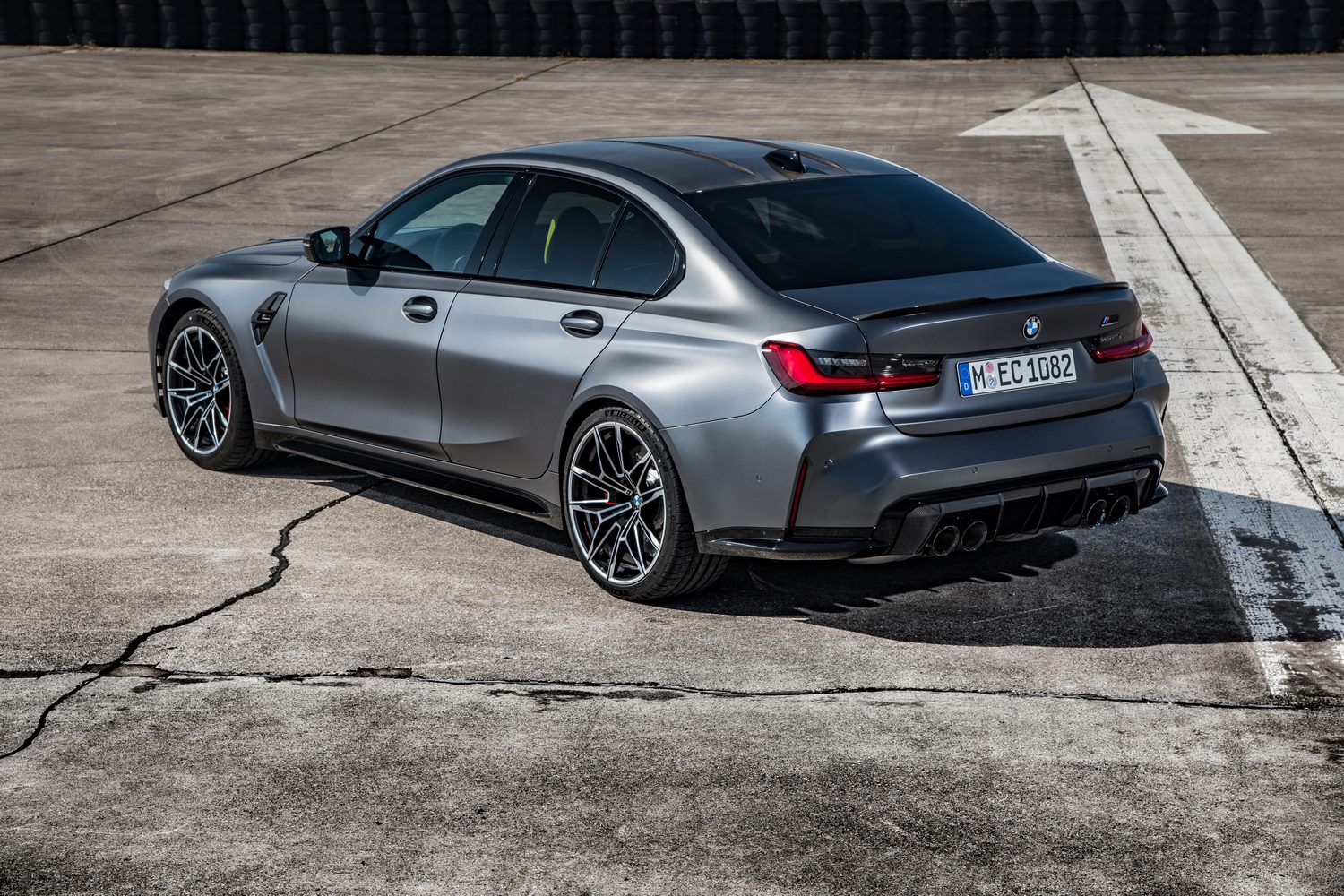 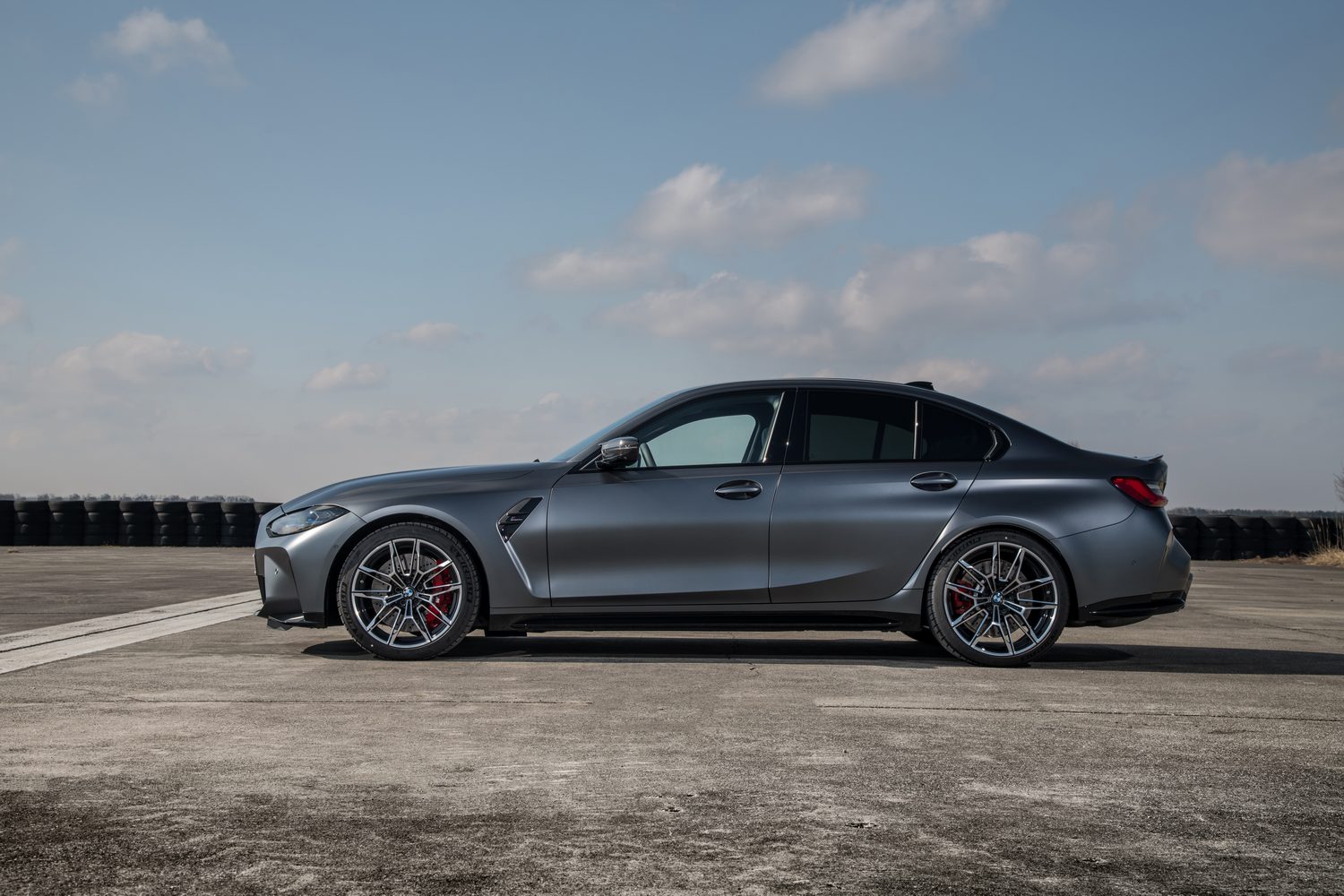 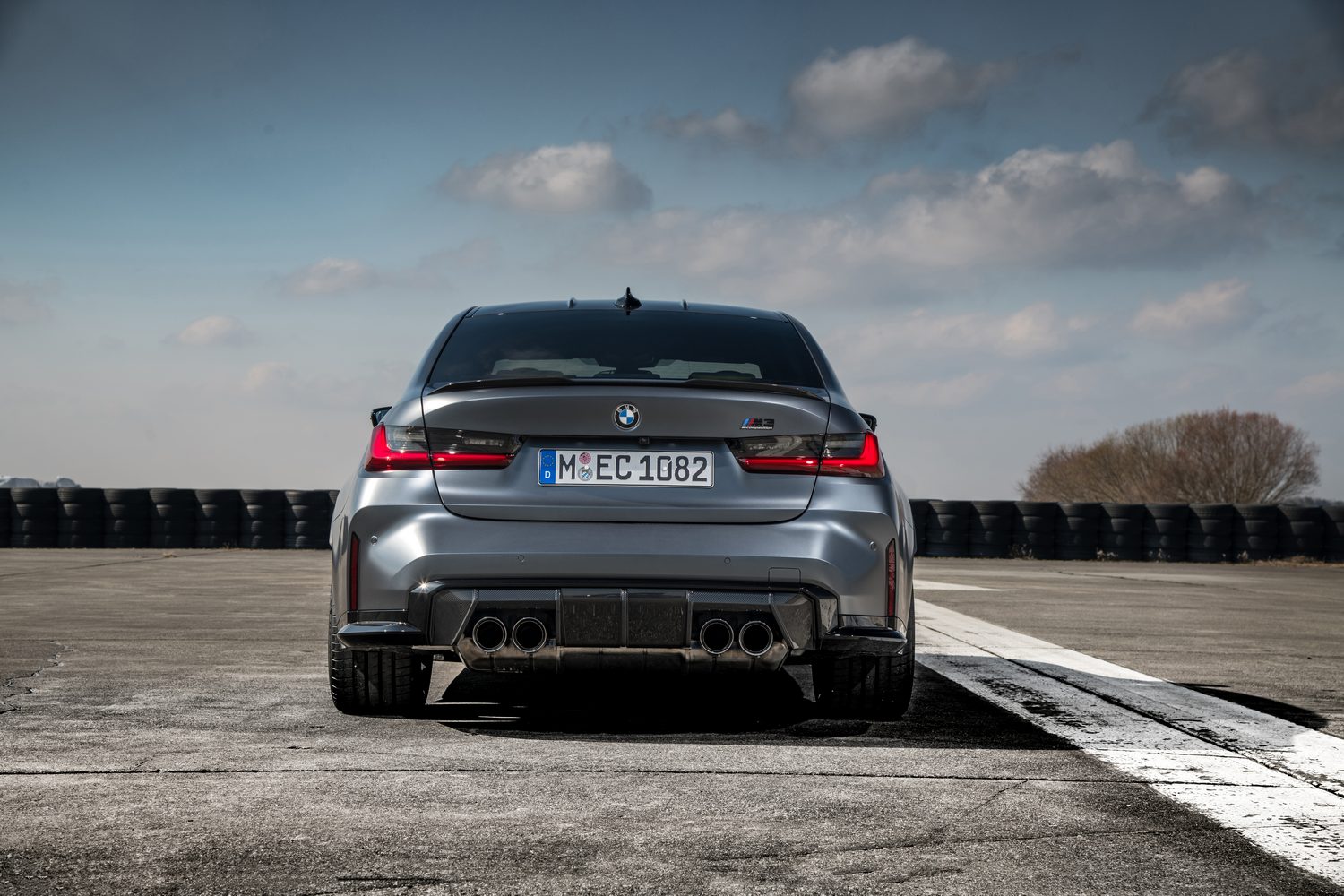 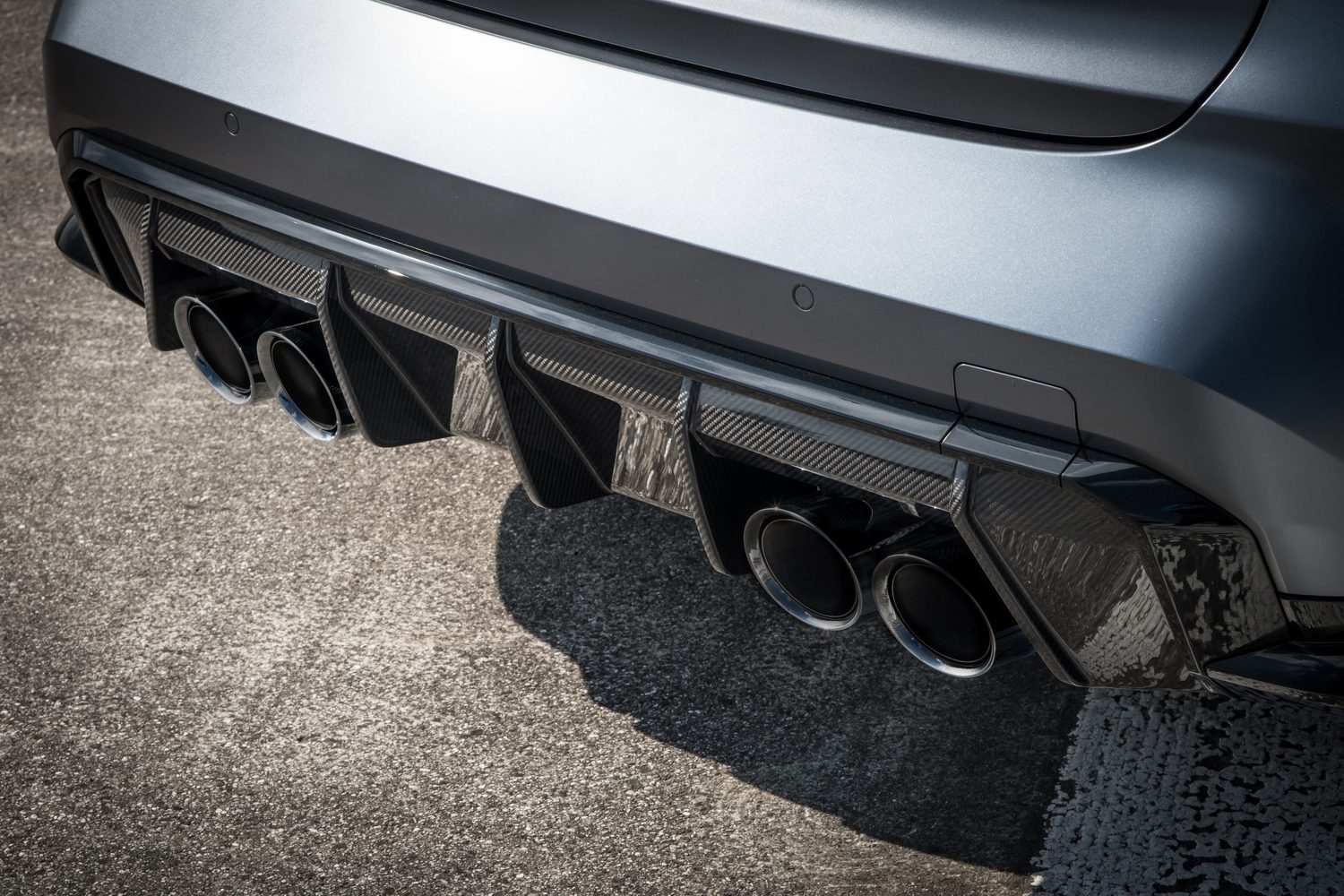 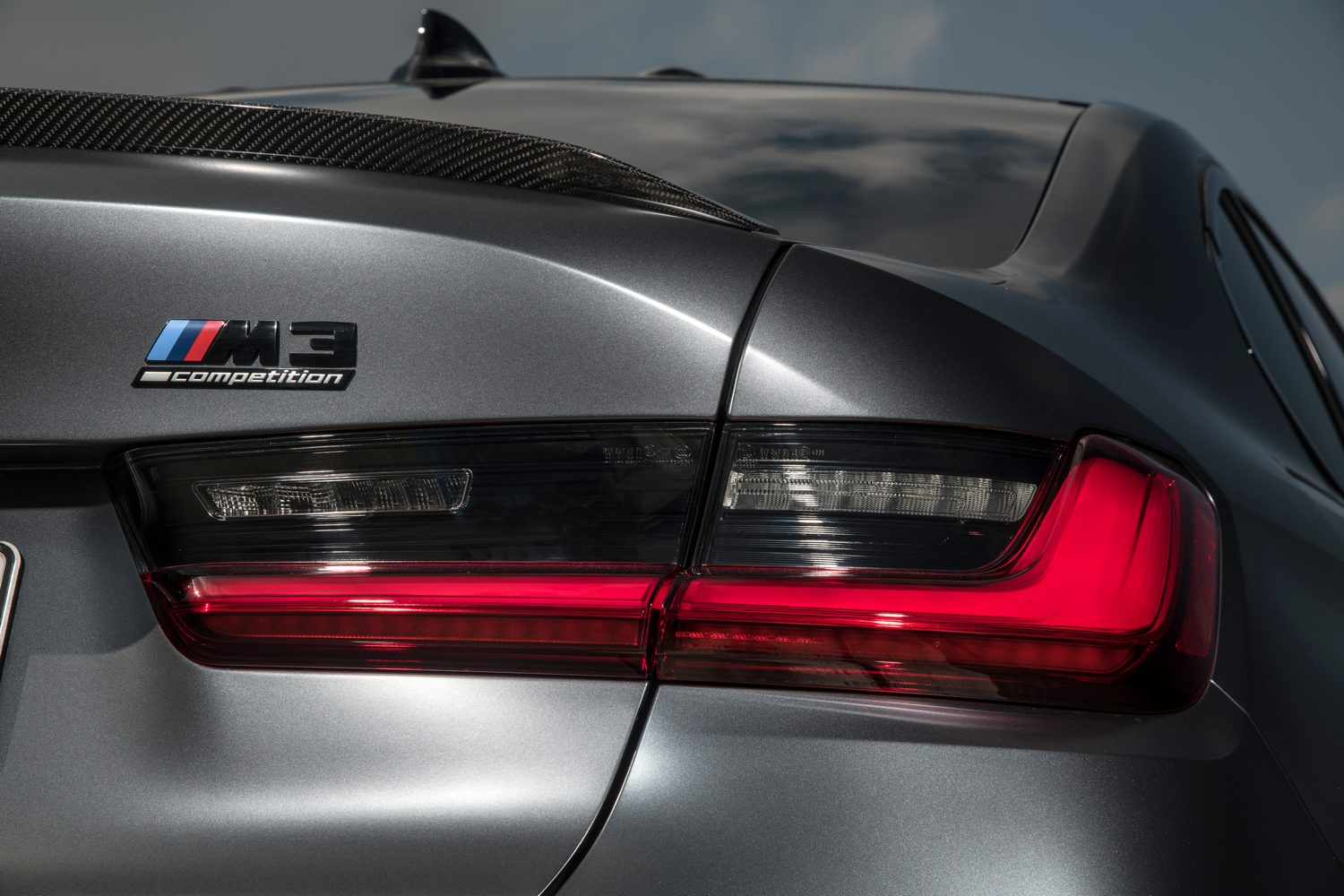 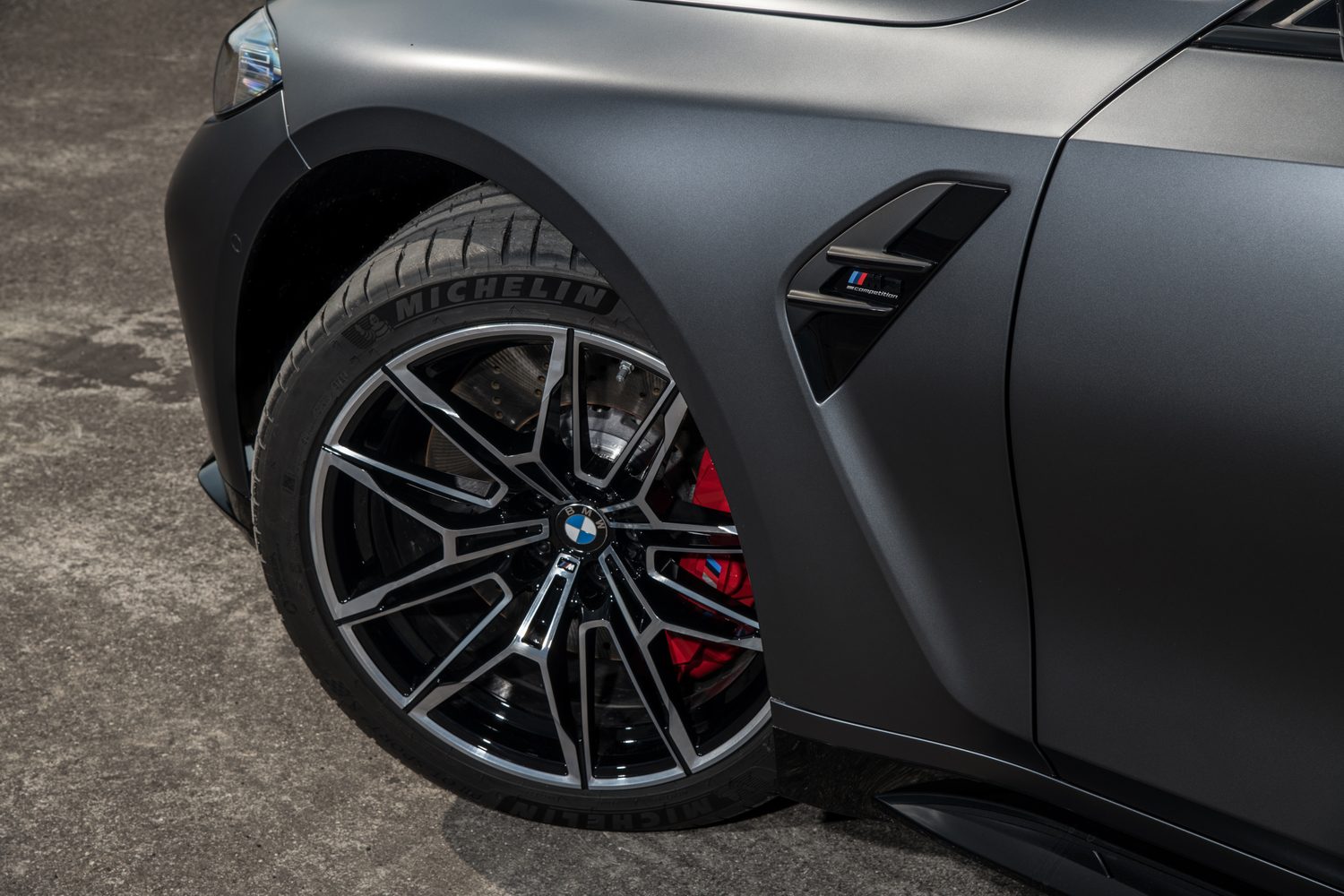 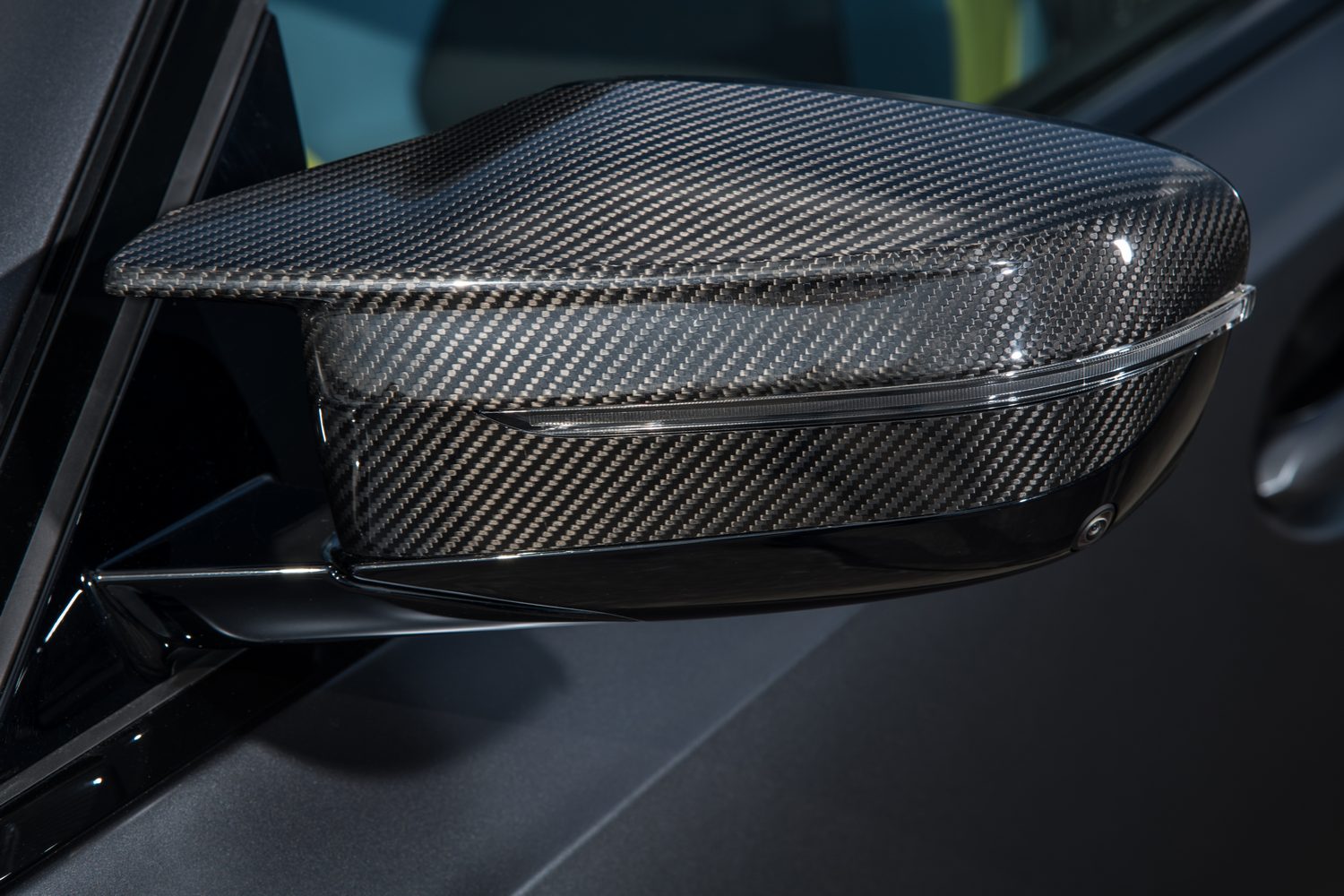 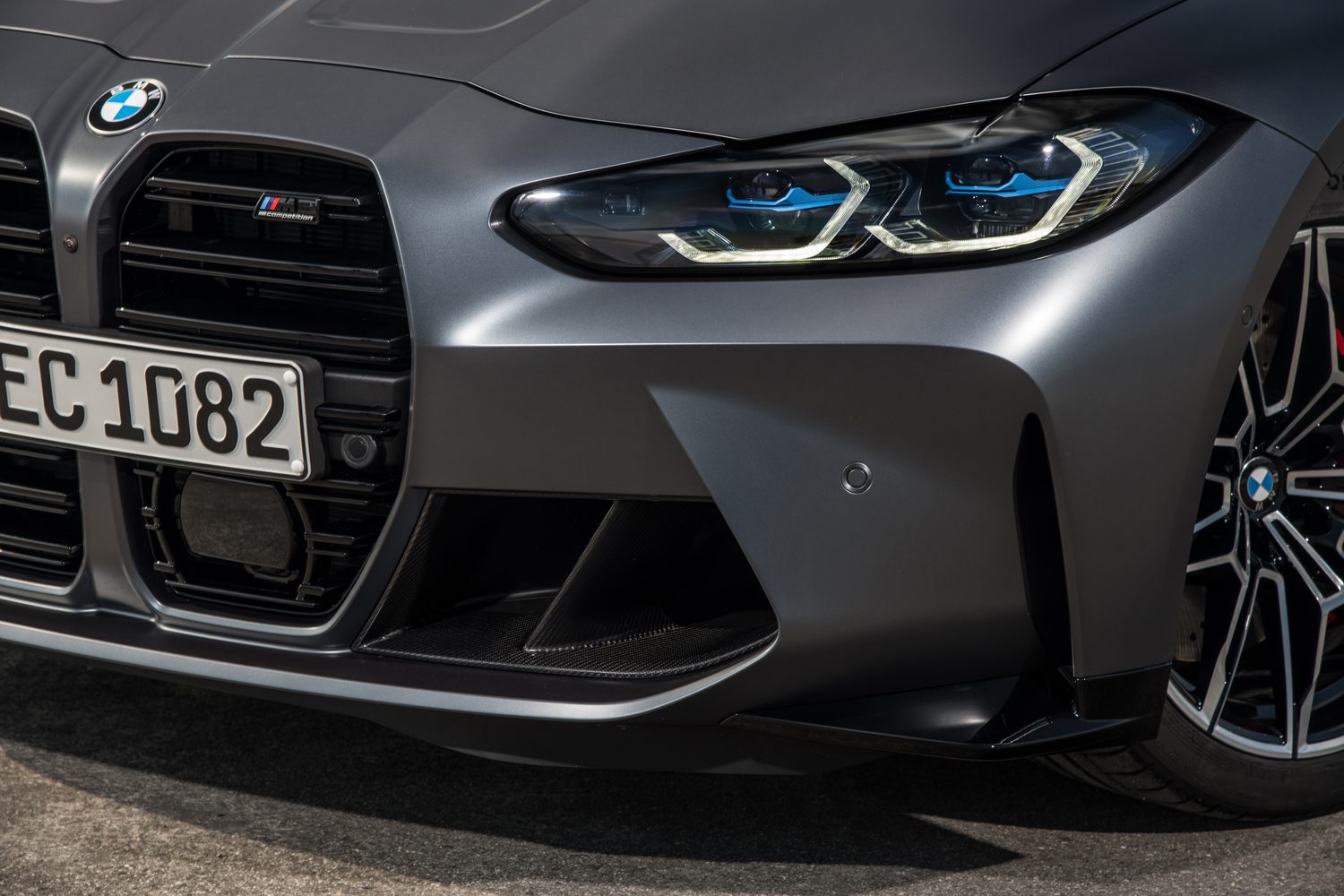 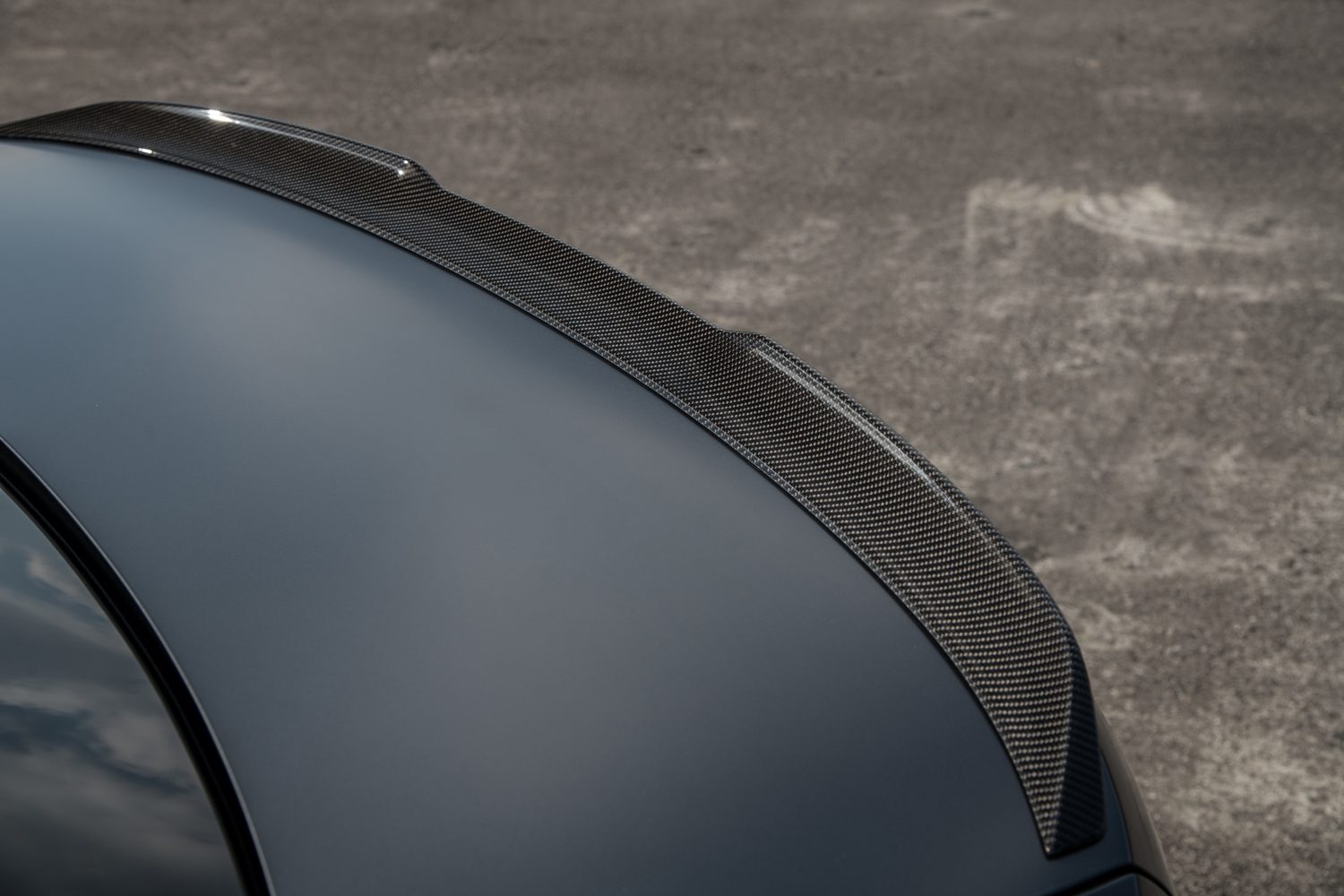 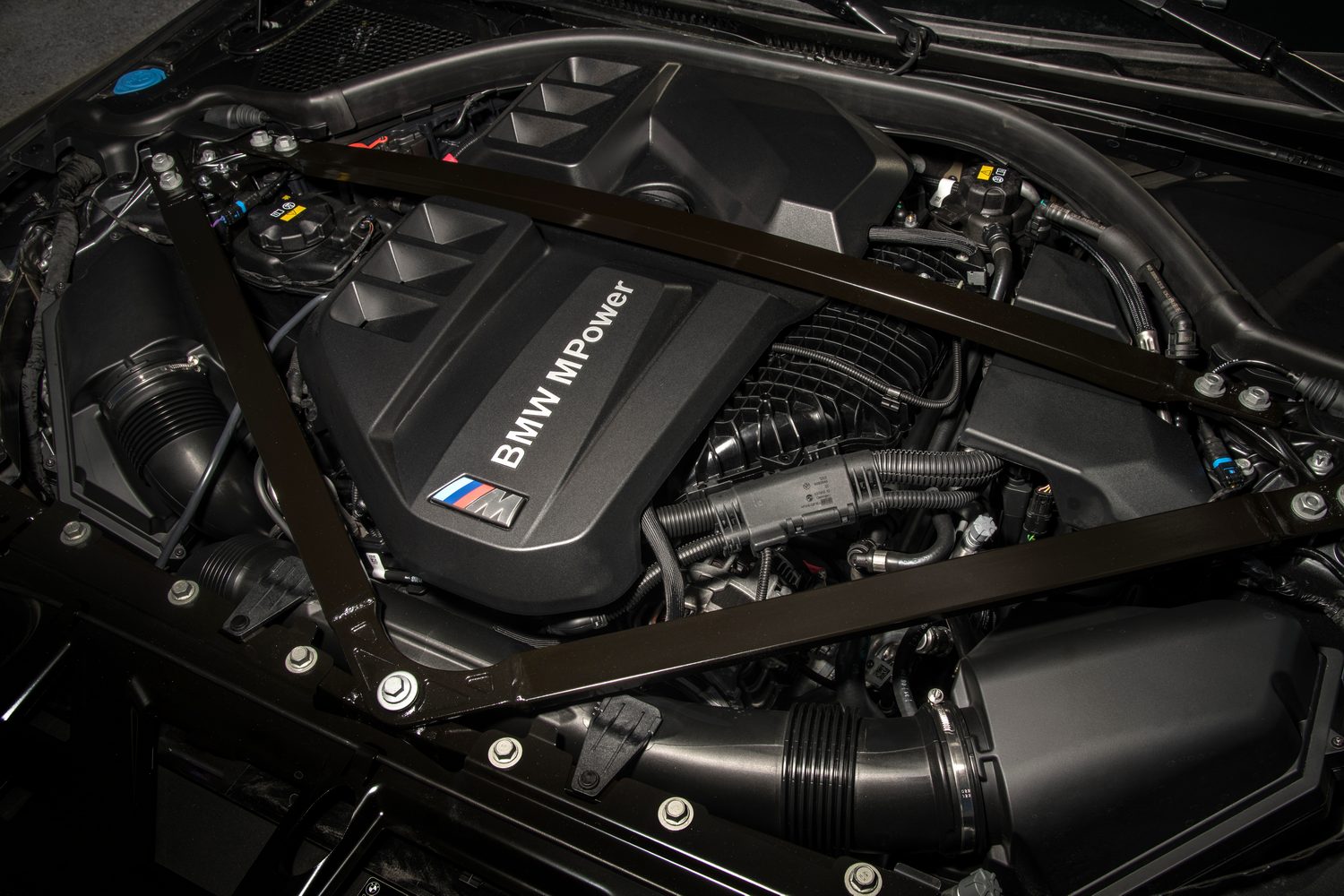 All-wheel drive gives the BMW M3 another level of usability.

The BMW M3 made its name as a usable lunatic, offering keen drivers the performance of a supercar without sacrificing the practicality and luxury of an executive saloon. The new 'G80' version has already proven itself more than worthy of the name, but will the controversial introduction of all-wheel drive spoil the fun or broaden its appeal?

BMW's decision to fit the xDrive all-wheel-drive system to the fabled M3 received a mixed reception from M3 aficionados. Some slammed it as neutering the M3's wild side, while others simply saw it as a way of improving performance and stability. But don't expect any comments from either side if you buy one of these beasts, because there's no obvious way to tell this xDrive version of the M3 Competition apart from its rear-wheel-drive siblings. There isn't even a subtle little xDrive badge on the boot lid.

Whichever wheels are powered by the raucous twin-turbocharged 3.0-litre engine, the M3 has the same enormous front grilles, which have become a sort of love-or-loathe calling card. They split opinion in the CompleteCar.ie office, with some deeming them the devil's work while others kind of like the more aggressive snout. This writer is one of the few to have been convinced of their allure; they look much better in the flesh than they do in a photograph, too.

Anyway, divisive front end aside, all versions of the M3 Competition get extended side sills and big gills behind the front wheels. There's also a carbon-fibre-reinforced plastic (CFRP) roof to reduce weight and lower the car's centre of gravity - a move designed to improve handling. The roof also has aerodynamic properties, channelling air down to the rear spoiler that pushes those big back wheels into the road.

Lower down, the M3 look is completed with a black diffuser and four 10cm tailpipes, as well as lightweight alloy wheels. The web-like forged wheels are different sizes at the front and rear, with 19-inch rims at the front and 20-inch versions at the back. Both cover painted brake callipers that can be had in red, blue or black. Or, if you choose the carbon-ceramic brakes, gold.

And there is the one thing that will change how your M3 looks: the options list. Aside from all-wheel drive, you can specify a range of optional goodies. Our test car came with the M Pro Pack, which added the carbon-ceramic discs and gold callipers, plus the removal of the traditional 250km/h speed limiter. It also had the Ultimate Pack, which added some driving assistance technology and gorgeous carbon bucket seats, while the standard black plastic skirt around the sills and front splitter was replaced with carbon fibre.

Inside, the M3 will feel familiar to any BMW driver, with the same big infotainment screen and the modern digital instrument cluster, as well as a slightly tarted-up version of BMW's latest steering wheel design. But because it's an M3 Competition, it also gets a sportier gear lever, a red starter button and the BMW M colours in the steering wheel stitching.

The quality is exquisite, with every surface covered in high-end materials and every button beautifully engineered. Even the carbon-fibre-inlaid gear shift paddles have been really well thought through, with lovely textured rubber on the back. It's a tiny touch that makes a massive difference to the atmosphere.

As do the aforementioned M carbon bucket seats. The rear shell of these is a beautifully engineered single lump of carbon fibre, to which the shapely leather padding has been applied. There isn't that much depth to the bolsters, but they're perfectly positioned and hold you in place incredibly well. The only problem is getting in and out, when the solid sides bite into your buttocks.

Other than that, those seats do little to impinge on the practicality of the M3. Because it still comes with four doors (you need the more hardcore M4 for two-door action) and rear seats, there's enough space in the back for adult passengers. Legroom is plentiful, and headroom will only be tight for the tallest rear-seat passengers.

There are two main facets to the M3's personality: performance and practicality. To be a successful super-saloon, the new M3 has had to merge all the qualities of a true three-box executive car with all the blood and thunder of a high-end supercar. And it does that with aplomb.

Adding xDrive to this G80-generation M3 certainly hasn't damaged the performance. Most of the time, you won't even notice the rear-biased system is there at all, but it's working away in the background. The on-board computers constantly check which wheels have the most traction, then deliver the power to whichever end can make best use of it.

Usually, the fat rear tyres will bear the brunt of the 3.0-litre straight-six's might - just as they would in the rear-drive M3 - but there's a clever, electronically controlled clutch that knows when those massive rubber rings begin to slip, then moves the balance towards the front. That works in tandem with a clever rear differential, which can also distribute the power between the two back wheels as required, and that works with BMW's 10-stage traction control system to allow varying levels of slip. That's only really for use on track, though.

In the real world, all that means the M3 Competition xDrive can deliver its power more effectively, and it makes the car easier to handle in wet, slippery conditions. As a result, the all-wheel-drive car is noticeably faster than its rear-wheel-drive sibling. The 3.5-second dash from a 0-100km/h is a 0.4-second improvement on the 'standard' car, while the top speed remains limited to 250km/h. Unless you choose the M Driver's Package, which ups the top speed to 290km/h, which is of no use to most people.

Whatever the top speed, the addition of all-wheel drive simply means you have more access to that performance. As well sorted as the rear-drive M3 Competition may be, greasy roads and judicious application of the throttle pedal would have the potential to cause a few heart-in-mouth moments, particularly in one of the more savage driving modes. But the xDrive system looks after everything quietly and unobtrusively. Maybe that takes some of the jeopardy out of M3 ownership, but on Ireland's uneven, frost-ravaged public roads and with 510hp under the bonnet, that's probably a good thing.

But even those die-hard M3 fans who want the tail-happy hi-jinks of a rear-drive M3 will still be catered for by the xDrive model. That's because the car allows you to customise it to suit your requirements, and that means the all-wheel-drive system need not be a permanent fixture. On a racetrack, the system can be dialled back in favour of a more rear-biased setup, which is designed to make drifting easier, or it can be disabled altogether, turning the M3 back into a rear-drive monster. So not only does xDrive make the M3 more stable when you need it, it also reverts to type when you don't. It's a win-win.

In all honesty, however, there's no real need to turn the xDrive system off unless you want to engage in some serious drifting. The M3 handles so beautifully in stock all-wheel-drive mode that fiddling with the all-wheel-drive system just isn't necessary. The car is perfectly poised and wonderfully balanced, which means it goes exactly where you point it. Those massive tyres offer so much grip that the M3 Competition can corner at mind-bending speeds, and the whole car will still feel perfectly stable while it does so.

It is, however, worth playing with the little button on the centre console marked 'Setup'. That allows you to tweak the characteristics of the engine, brakes, suspension and steering, effectively allowing you to tune the car on the move.

The engine settings make the most marked difference, with the Sport and Sport Plus models turning up the savagery and offering a forceful boot up the backside whenever you hit the accelerator. If you're too abrupt with your inputs, it can feel quite uncomfortable. All three modes will allow you to gather pace at an alarming rate - they just change the immediacy of the response. We found the standard, efficiency-centric mode best for everyday driving, but the Sport and Sport Plus settings will come into their own on a track or a good back road.

The same goes for the suspension. The M3 rides stiffly at the best of times - there's no mistaking the lack of flex in the car's structure - but the ride isn't too shabby in its softest Comfort setting. Every bump makes its presence felt, but it never sends jolts up your spine. It's the only setting that makes any sense at all on Irish back roads. But on a track, the Sport Plus mode seems to tighten up the M3's body control, making the already planted car feel even less willing to lean over through corners. It's as though it tenses the whole car up, making the responses swifter but reducing the absorption of any impacts.

What we would recommend changing is the steering setting. Opt for the Sport mode and the steering still feels a bit numb, but it's heavier and more natural. In Comfort mode, the lighter weight is at odds with the rapid response to the driver's steering inputs, and it has a strange, slightly detached feel. Sport mode just inspires ultimate confidence in the car's capabilities.

And we'd do the same with the brake pedal. Carbon-ceramic brakes are notoriously devoid of feel, but the Comfort mode seems to feel slightly less connected than Sport mode, which reduces play in the pedal and instil a little more confidence.

Opting for this xDrive version will increase the price by around €2,500 compared with the standard M3 Competition. But when the normal, rear-drive car costs almost €137,000 before options, that's a tiny uplift. In fact, if we're comparing optional extras, the xDrive system costs about half as much as the BMW Individual Frozen Portimao Blue Metallic paint. Or to put it another way, it's around a sixth the price of the Pro Pack, which gives you the carbon-ceramic brakes and increased top speed - neither of which most people really need.

Fortunately, the M3 Competition does come with plenty of equipment that you do want or need. Standard equipment includes climate control, a head-up display and a Harman/Kardon surround-sound system, as well as the digital instrument cluster and BMW's iDrive infotainment system, complete with gesture control and internet connectivity.

Opting for the all-wheel-drive version of the M3 Competition is a bit of a no-brainer. When the rain teems down or the roads get icy, it's an invaluable addition that simply amplifies the M3's greatest strength: its usability. Yet it does that while also improving the M3's other key selling point: performance.

So, for all the purists' objections to the xDrive system, the only real sticking point is a slight increase in the list price. But when you're paying a six-figure sum for your sports saloon, what's an extra few thousand euro? It's a minimal expense for a feature that makes the M3 Competition's addictive performance more accessible on a daily basis - particularly in Ireland's notoriously unstable climate. 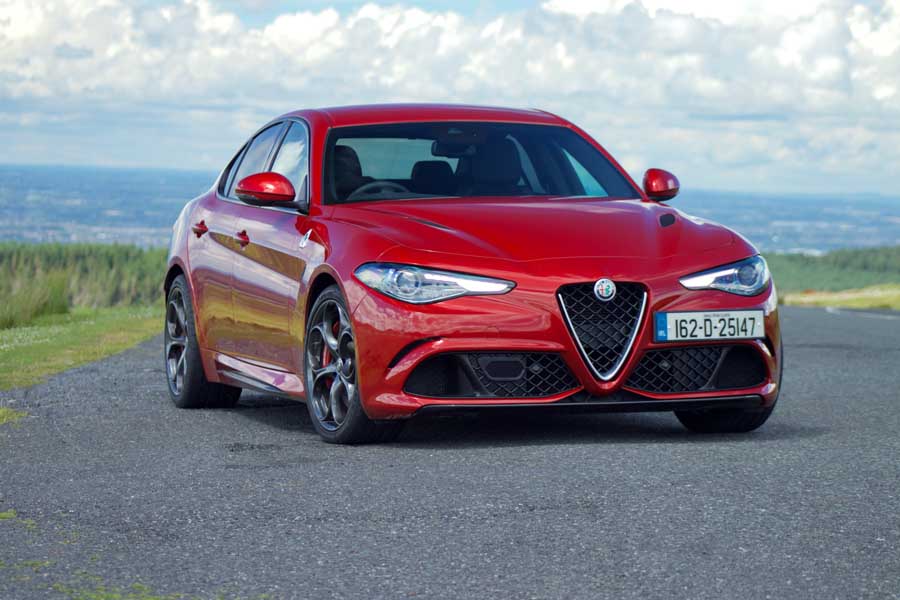 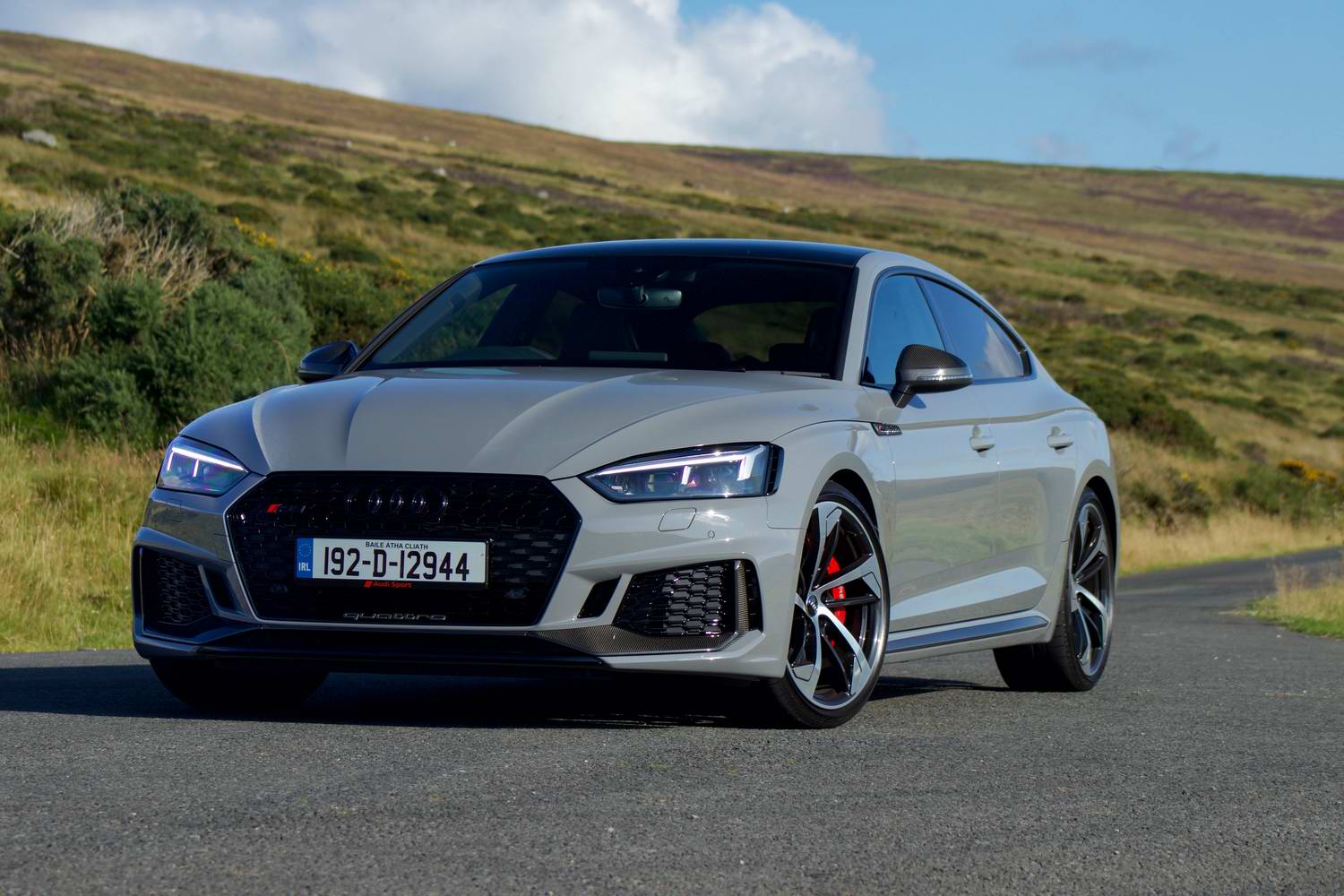 Audi RS 5 Sportback (2019) review
Audi RS 5 Sportback vs. BMW M3 xDrive Competition Saloon (2022): although it's technically a four-door fastback, the RS 5 is now Audi's closest rival to the four-door M3. Both manage 0-100km/h in less than four seconds, but the BMW has the edge when it comes to handling. 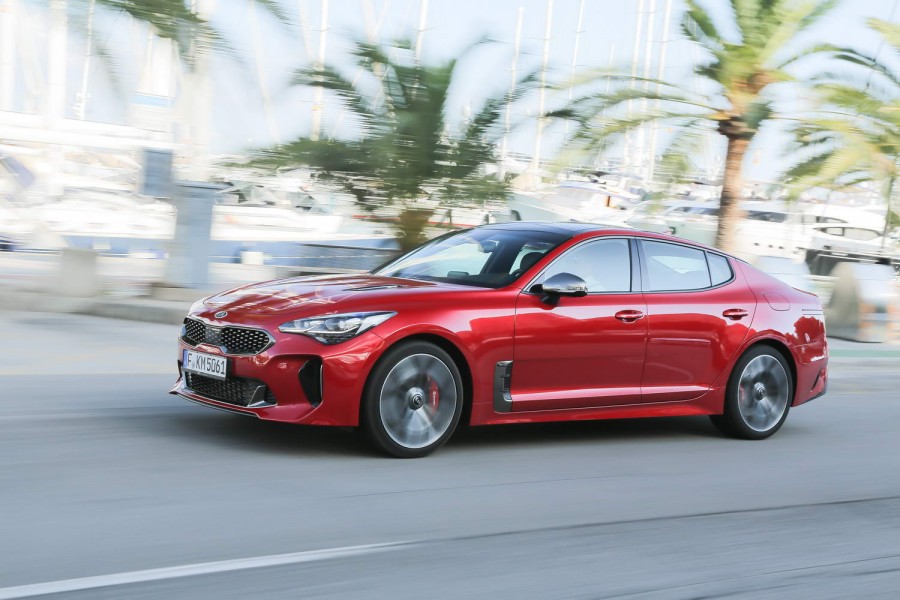 Kia Stinger GT V6 petrol review
Kia Stinger GT S vs. BMW M3 xDrive Competition Saloon (2022): another four-door fastback, the Kia Stinger GT S has an even bigger engine than the M3, but a smaller price tag. It's less powerful, though, but it has plenty of quality and old-school charm. It's also a very good-looking beast.