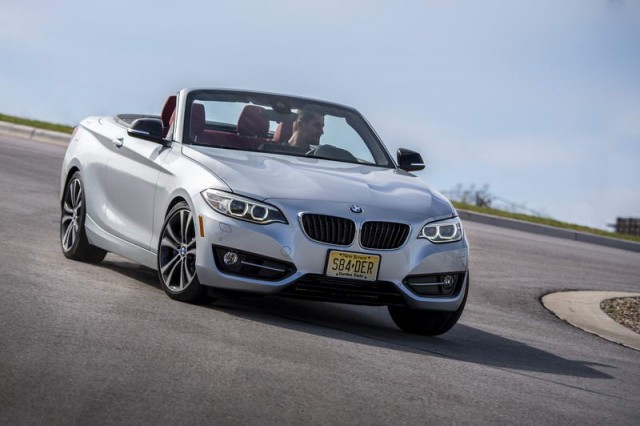 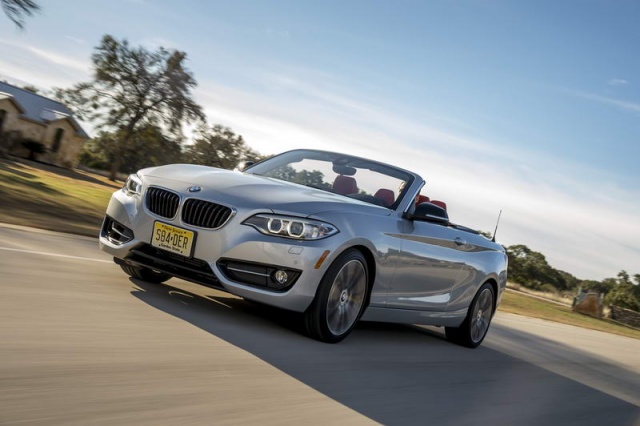 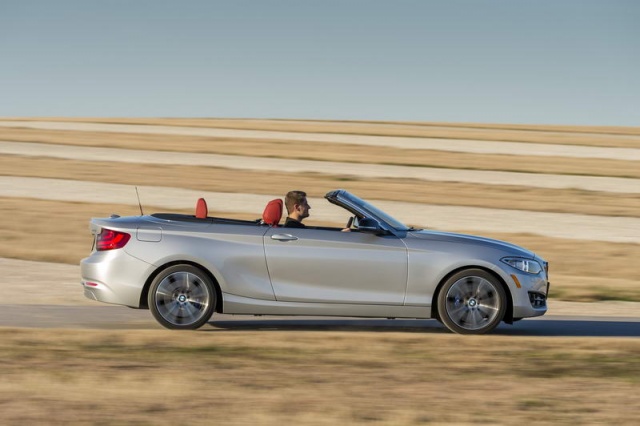 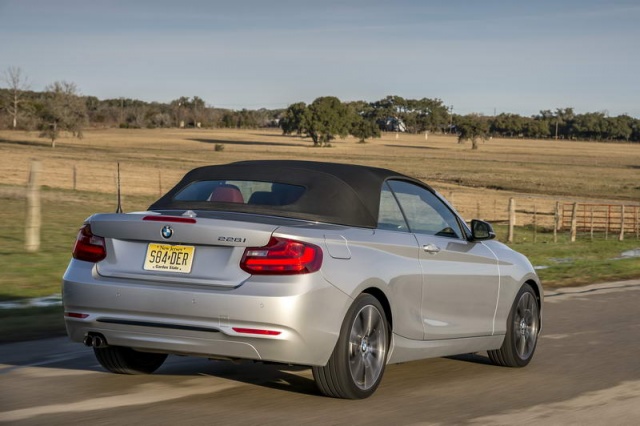 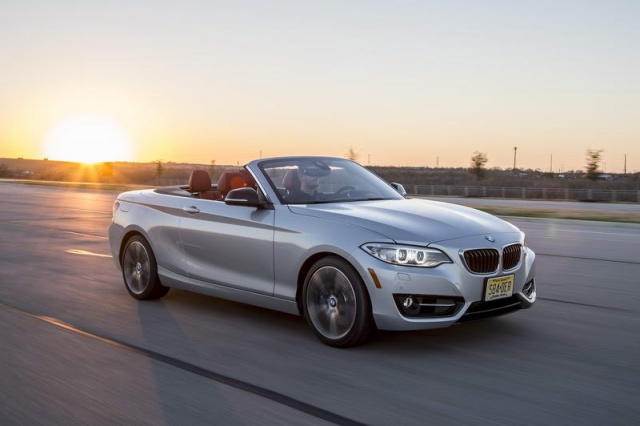 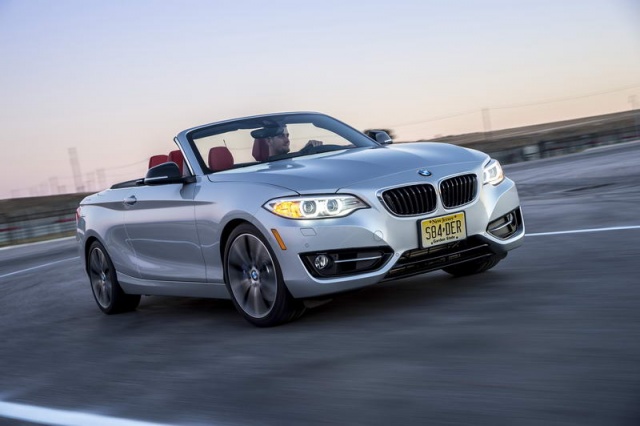 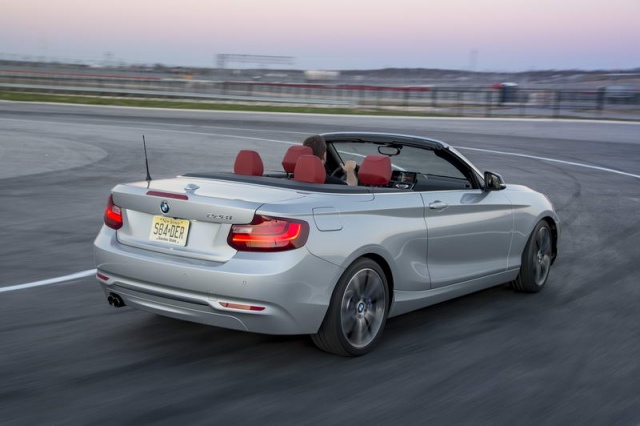 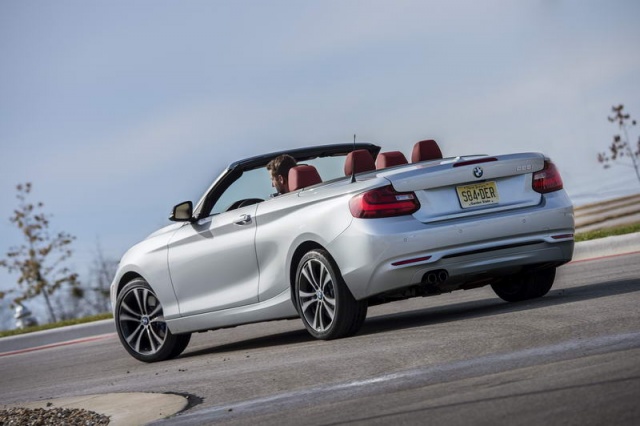 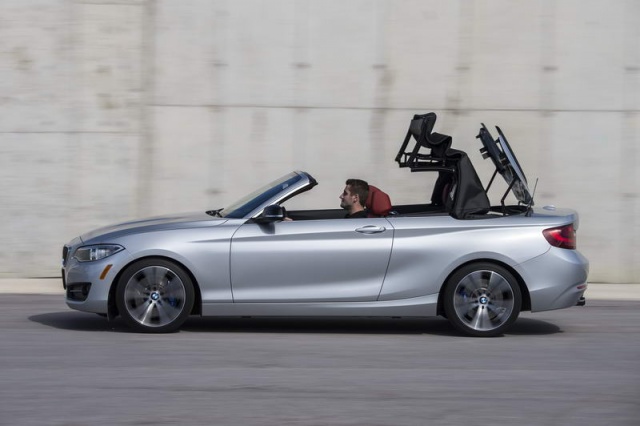 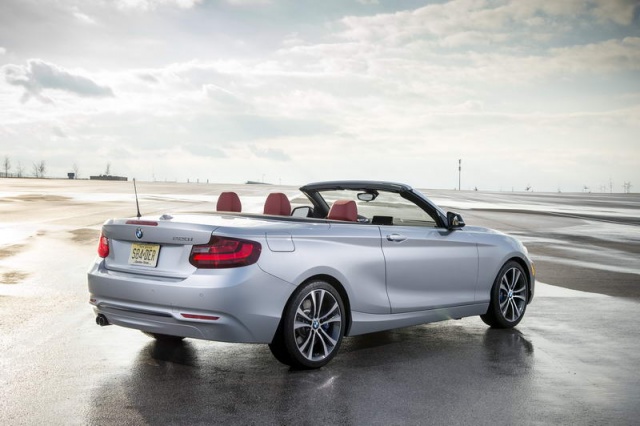 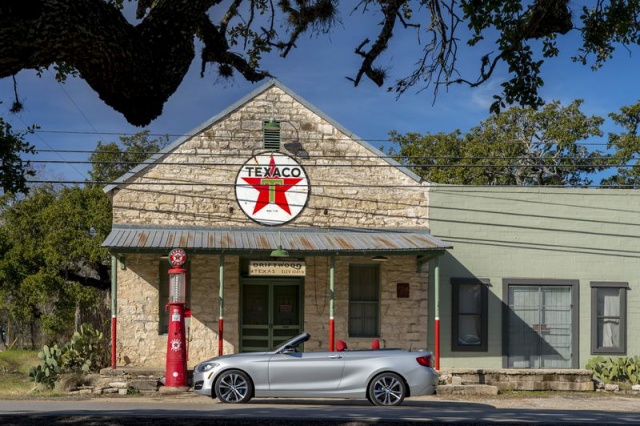 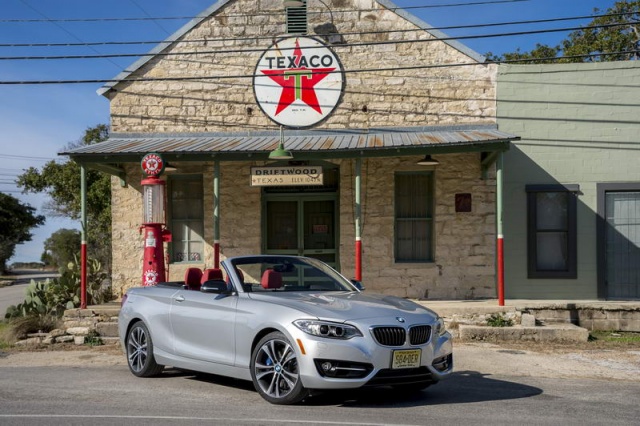 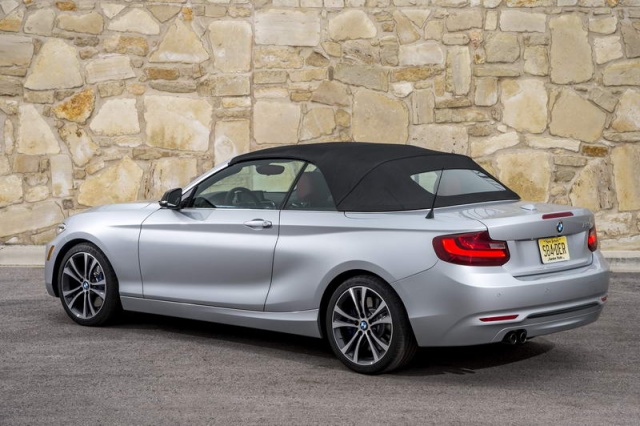 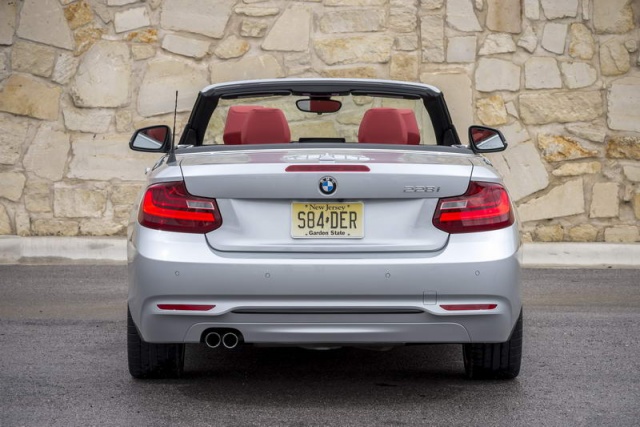 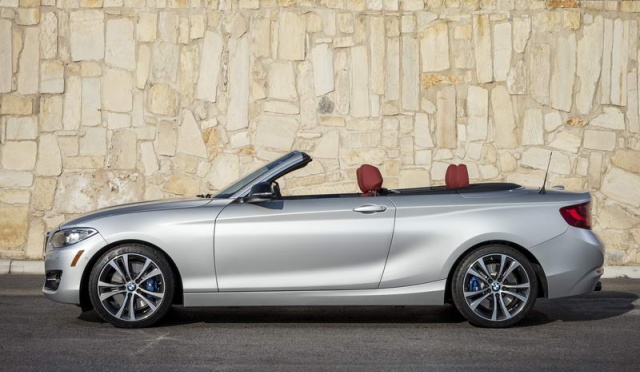 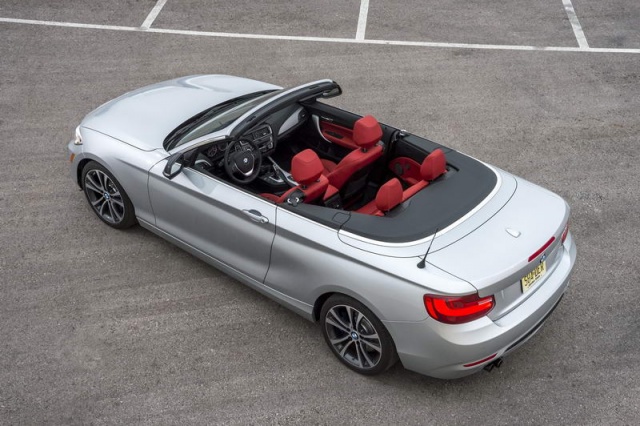 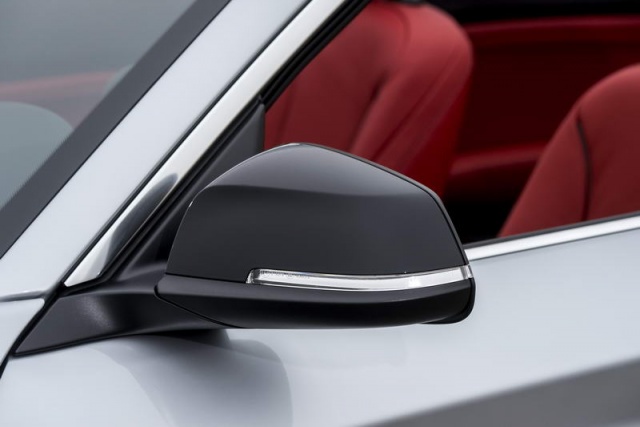 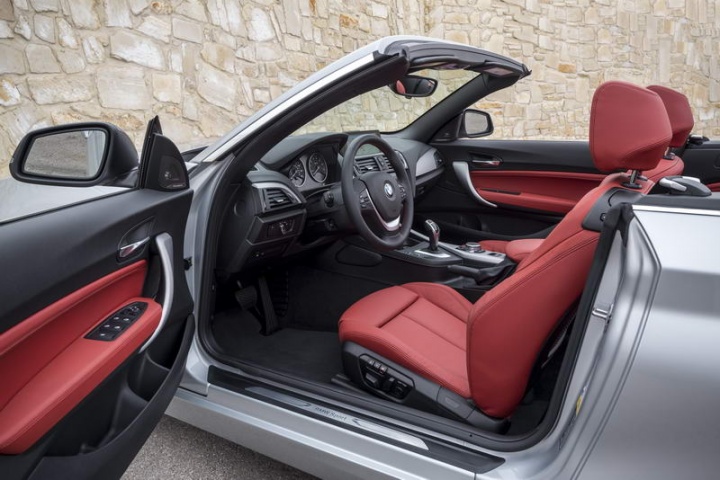 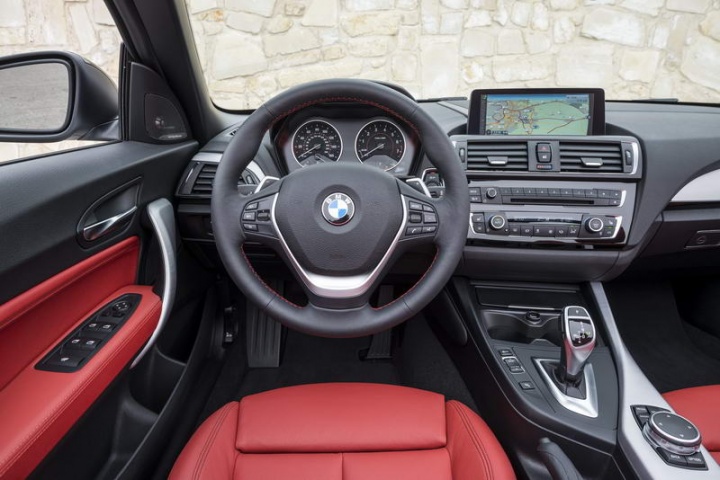 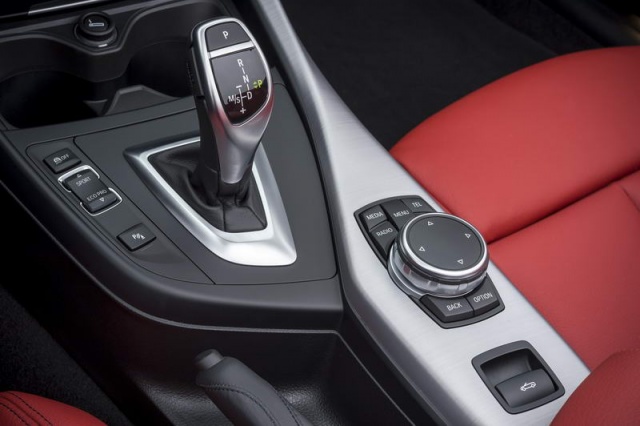 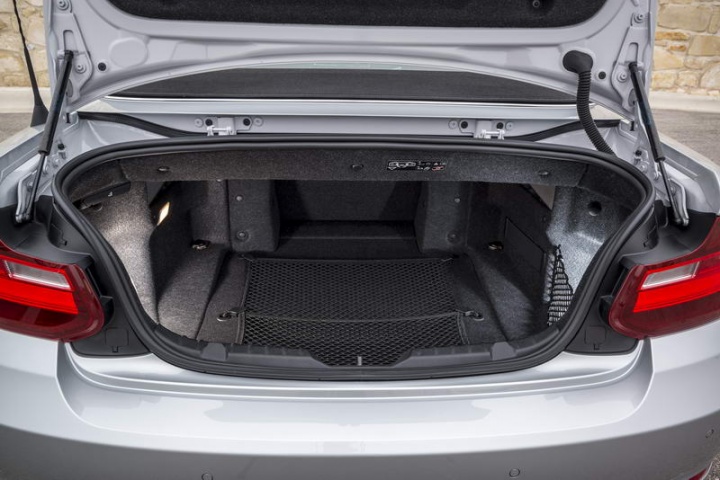 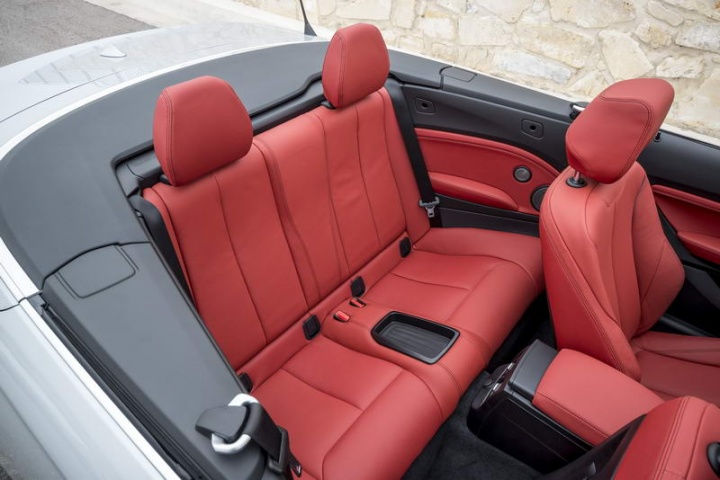 Time for BMW to wheel out its first ever 2 Series Convertible. It's predictably good.

All that benefits interior space too, though the rear seats are hardly what you'd call comfortably spacious. You won't want to carry passengers with the roof down anyway, as that means you can't use the wind breaker, which reduces buffeting in the cabin at motorway speeds. Nonetheless, the 2 Series Convertible is still quite practical for a cabrio and BMW has increased the size of the boot to make it more so - along with better access to it from behind and via the rear backrest. With the fabric roof raised it swallows 335 litres of luggage. Press the right button for about 20 seconds and the top folds elegantly away, reducing space to 280 litres. For longer trips, many owners are likely to end up using the rear seats as extra luggage space.

BMW says that the 2 Series Convertible is significantly quieter than its predecessor when the roof is raised thanks to an extra layer of insulation, but without a 1 Series Convertible to hand to compare we'll have to take its word for it. We spent most of the launch with the roof down in any case, which is what a car like this should be all about. Within minutes it was clear that the structure is strong and stiff enough to maintain the engaging driving experience of the 2 Series Coupé and the convertible turns out to be a real hoot. Admittedly, our test cars were fitted with the optional adaptive damping system, but even in default mode it coped well with bumpy roads and a little spirited driving.

The 228i petrol model is powered by BMW's turbocharged 2.0-litre engine, putting out 245hp. While it feels and sounds a little flat at lower speeds, open it up and it comes alive in terms of sound and performance. This convertible is certainly quick enough for most though the smooth and linear delivery of that performance makes it deceptive. It works particularly well with BMW's excellent eight-speed automatic gearbox.

Prices start at €44,630 on-the-road for the 2 Series Convertible in Ireland. That's for the 220d Sport version with a manual gearbox. All versions come as standard with a six-speed manual and buyers have an option to go for the automatic. Because of the vagaries of our VRT system there's not much difference between the price of an automatic and manual for the petrol models. Those are the 220i, 228i and M235i detailed below.

While this pricing means the Convertible is some €5,000 to €7,000 more than the equivalent 2 Series Coupé, it's also about €10,000 less than the comparable 4 Series Convertible.

As mentioned above, the 326hp M235i specification is available in the new Convertible guise too, making it the first ever BMW M Performance model offered in this body style. It costs from €66,388 and it should be a compelling proposition if the Coupé is anything to go by. In some markets it's even available with xDrive four-wheel drive, but not here.

We're expecting a BMW M2 to go on sale in 2016 and it's conceivable that there'll be an open-topped version too.

While we were fans of the 1 Series Convertible, it never stood out as something special, but the new BMW 2 Series Convertible is. It maintains the Coupé's driving dynamics while offering the opportunity for a little wind in the hair motoring - and it looks great. We reckon it's good enough to choose over its big brother, the 4 Series Convertible, and there aren't many other options from rival car makers either.