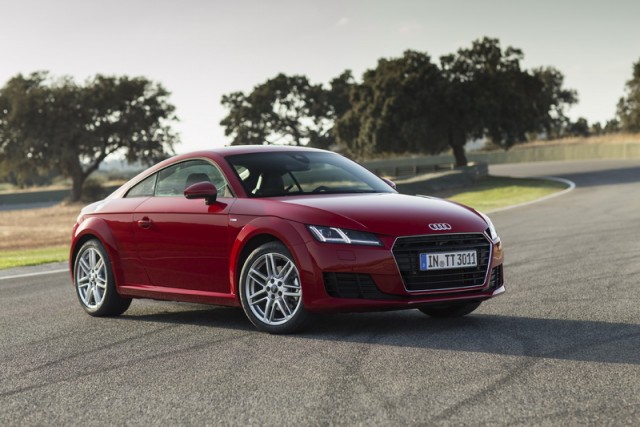 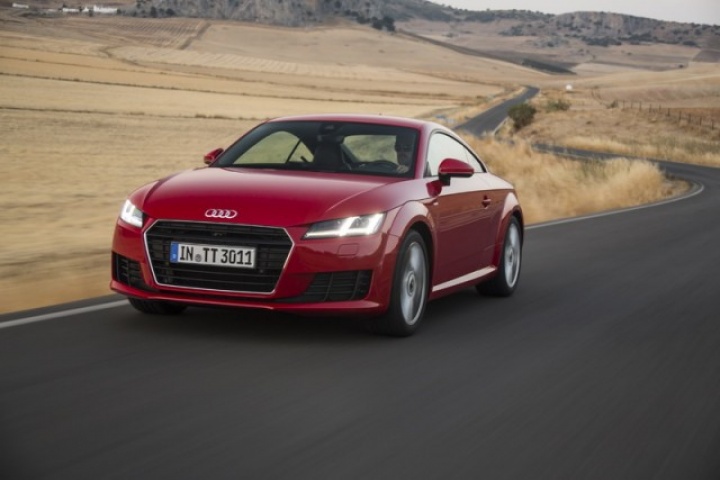 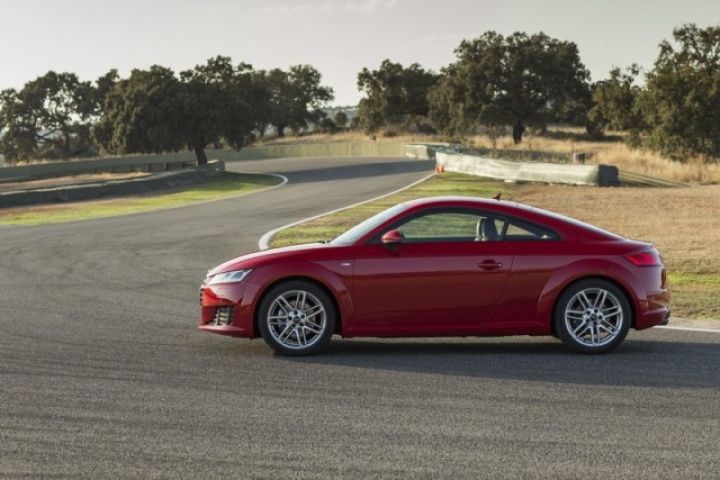 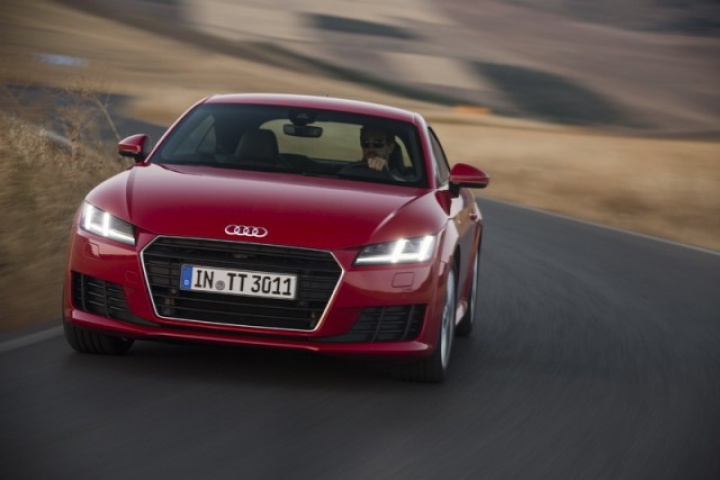 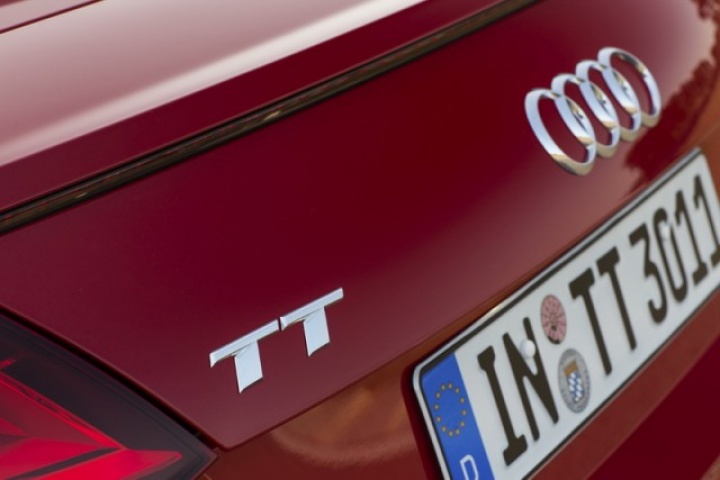 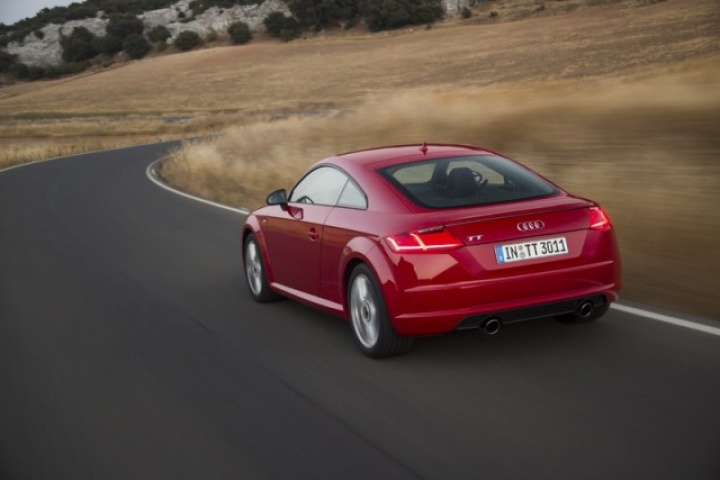 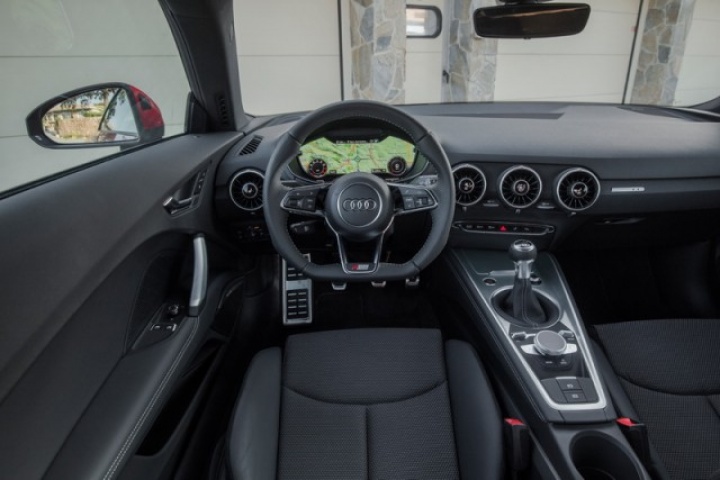 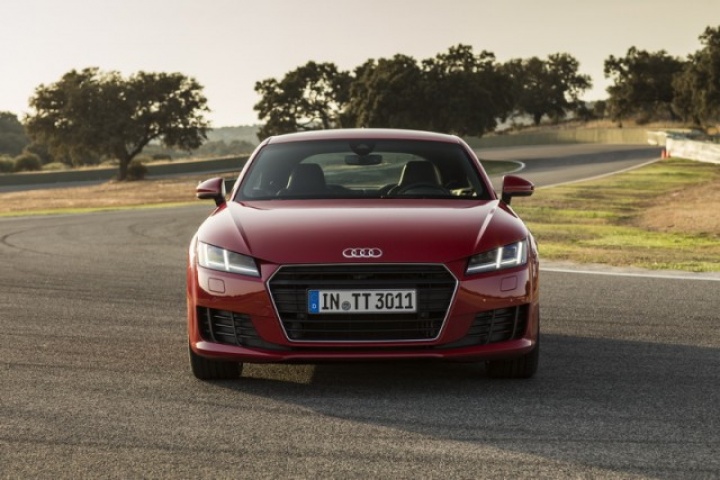 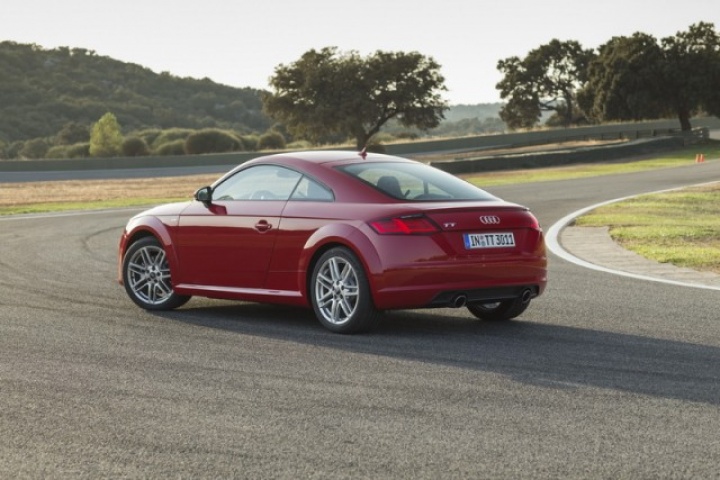 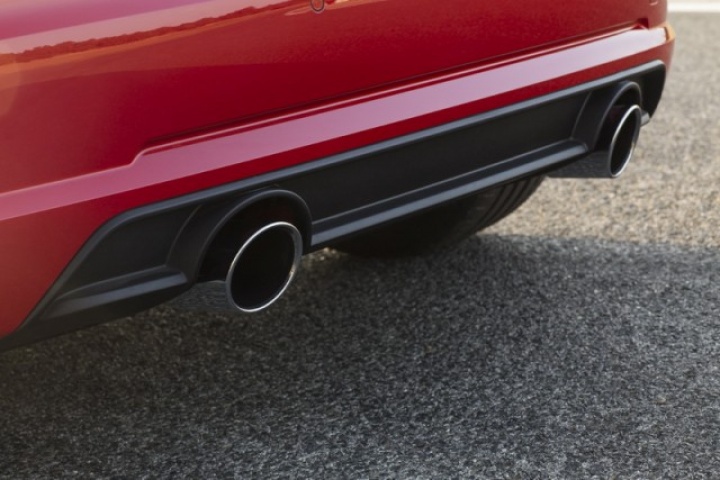 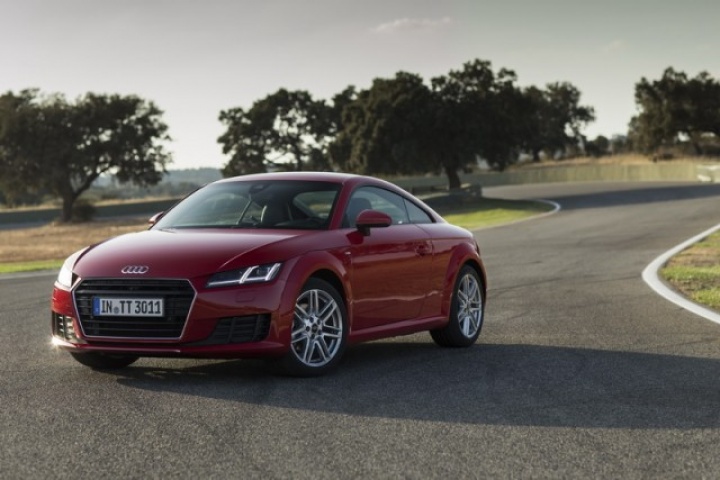 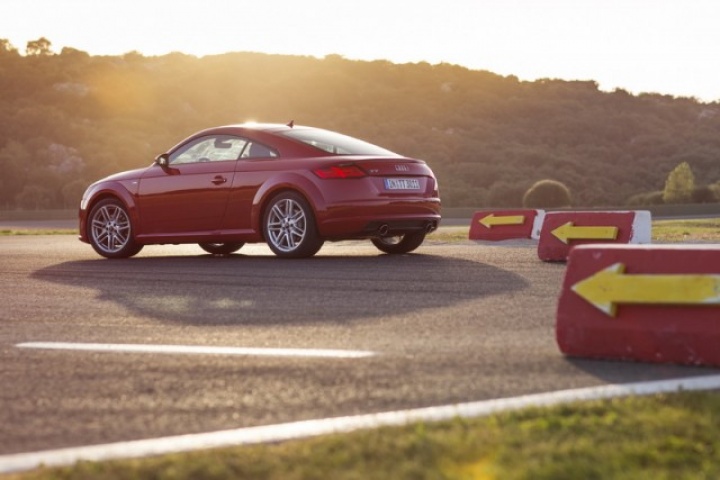 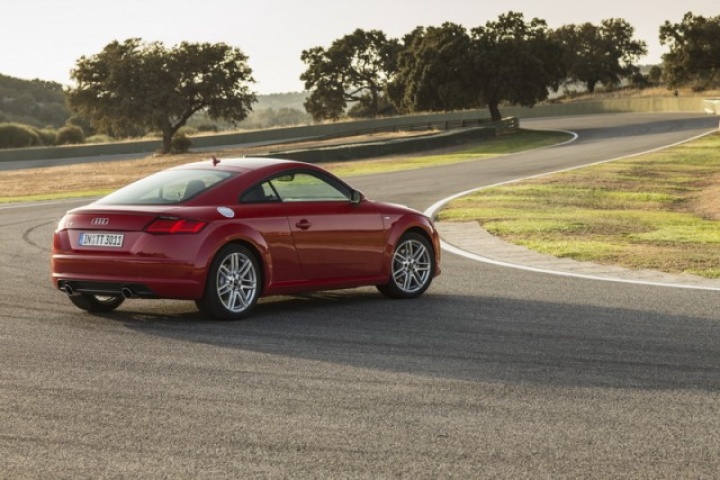 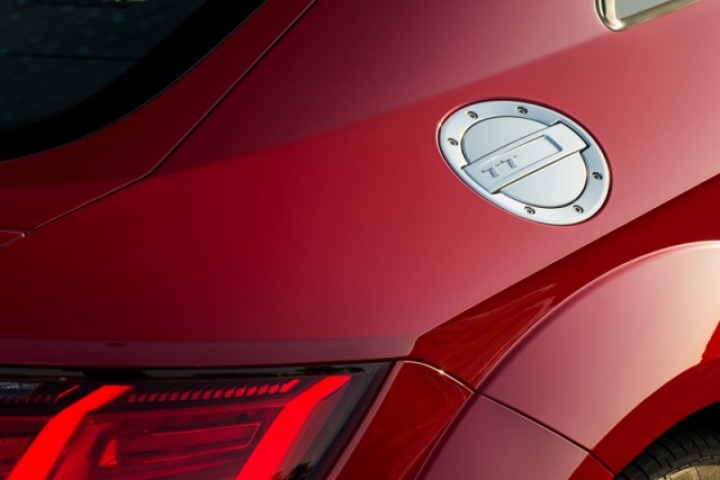 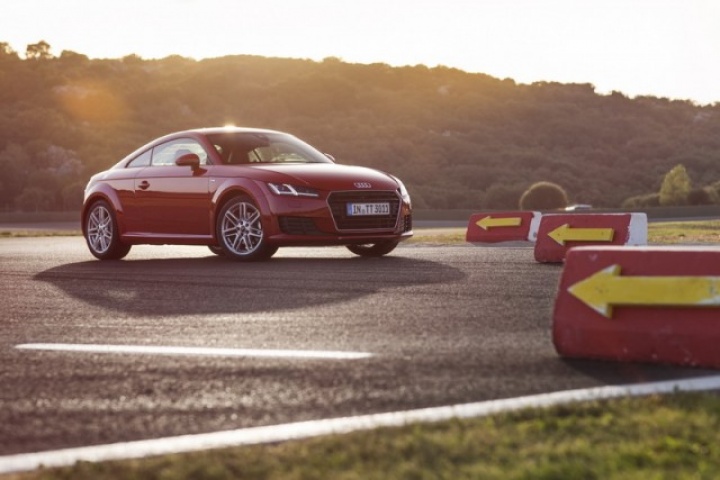 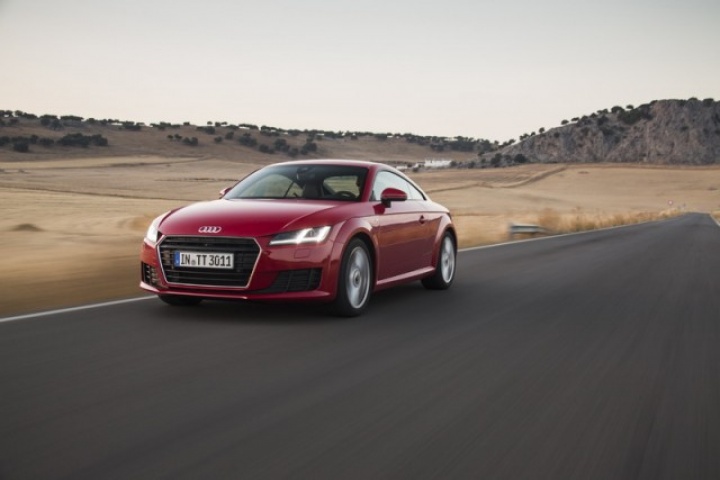 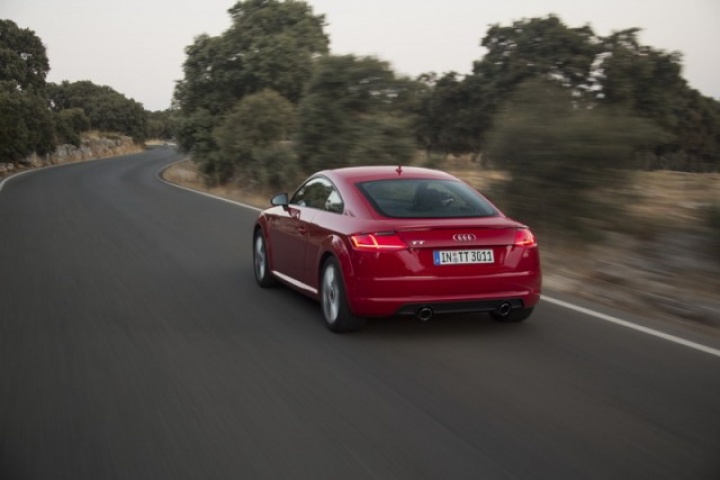 The big news is that the Audi TT's driving experience now lives up to the promise of the design.

Audi's third-generation TT gets a longer wheelbase for more interior space, though its shape remains entirely and predictably familiar. Inside is where there's been a revolution, with innovative 'virtual cockpit' instruments and beautiful detailing. More importantly to us, Audi has also added some real driving appeal.

The new TT is familiar. Unsurprising that, as the TT heralded a whole new era of Audi design when it arrived in 1998. The basic shape and surface detailing remain much the same, even if 500,000+ sales of its first two generations has somewhat softened the TT's visual impact. A longer wheelbase changes the TT's lines slightly, it more lithe than before, even if it's actually no longer overall, the shorter overhangs making it look a bit more muscular from most angles. The front adds to that with hints of the butch quattro concept that Audi displayed in 2010. The front and rear remain its most dramatic aspects; in profile the TT is so similar to its predecessor many won't clock the changes. Safe then, but even Audi's designers admit that redesigning an icon isn't an easy task...

The interior is more adventurous. The dash top is said to take influence from an aircraft's wing (think Boeing rather than Cesna) and the lack of a central screen is somewhat unusual in this connected world. Audi has moved all the infotainment functions into the 'virtual cockpit', a high resolution screen that takes the instrument's spot in front of the driver. It'll display a myriad of views - from a relatively conventional speedometer and rev counter set up to a Google Maps image overlaid with small instruments. It's a smart feature, freeing up the dash area for the very stylish air vents, which continue the aircraft theme with the strakes aping the blades of a jet engine. It's dark in there if the seat upholstery isn't a bright colour, though the build quality is impeccable. Yet for all the talk of greater space - thanks to the wheelbase stretch - you can still forget about using the rear seats for passengers.

The Audi TT has always over-delivered on the looks and interior but failed to really sparkle as a driving experience. That's less so with this new model, Audi's Dr Ulrich Hackenburg, Board Member for Technical Development, admitting that they've worked hard to reduce the tendency to understeer and given the TT more rear bias. That's easier when all wheels are driven with the ability to proportion drive rearward, but with this 230hp TFSI model offered in front-wheel drive guise it's less straightforward. What's obvious immediately though is sharper steering, the TT's nose more accurate in its response to input at the wheel, and there's even a modicum of feel through the rim.

The suspension is firm, but not to the point of calamitous ride comfort. Smaller wheels help, though clearly they don't look as good. The brakes are strong and the manual gearbox has an acceptable, if unremarkable, shift. What's impressive is the 2.0-litre TFSI engine's potency. It might be the de facto entry-level choice at launch (Audi is certain to offer less powerful petrol TTs in time), but its performance wouldn't suggest it's an inferior choice. The benchmark 100km/h arrives in 6.0 seconds from rest, the front wheels sometimes struggling to contain the powerful surge and ample torque from the all-new turbocharged engine. That 2.0-litre unit is flexible, and quick to respond, but it's a shame it doesn't offer a bit more aural charm to match its impressive response and muscular performance.

Quick, with fine handling, the TT's already looking like a more promising driver's proposition than it once was. For all its new-found vigour and agility it's still not quite as engaging as the best alternative coupés from BMW - or Toyota's GT86 - but there's definitely less of a feeling of being short-changed by the drive following the promise of its iconic, sporting looks.

Irish pricing and specifications have not yet been confirmed, but we're pretty sure buyers will get a generous level of equipment as standard, including air conditioning and that 'virtual cockpit', though there's the opportunity to spend more on advanced driver assistance options, even higher output and quality stereo systems and plentiful personalisation.

This 2.0 TFSI model might manage 0-100km/h in 6.0 seconds, but that performance doesn't come at the expense of emissions and economy. The official figures of 137g/km and near 50mpg impress, even if the reality in day-to-day driving is more likely to be around the 30- to 35mpg mark - if you can avoid the temptation to use its plentiful performance.

Finally we have an Audi TT that delivers a more engaging driving experience. It's not so focused as to turn off its existing customer base, but exciting enough to attract plenty of new ones. Good looks remain a huge part of its draw, while the interior is sensational. This 230hp model is quick and engaging enough to ignore most of the others, and relatively easy on your pocket, too.