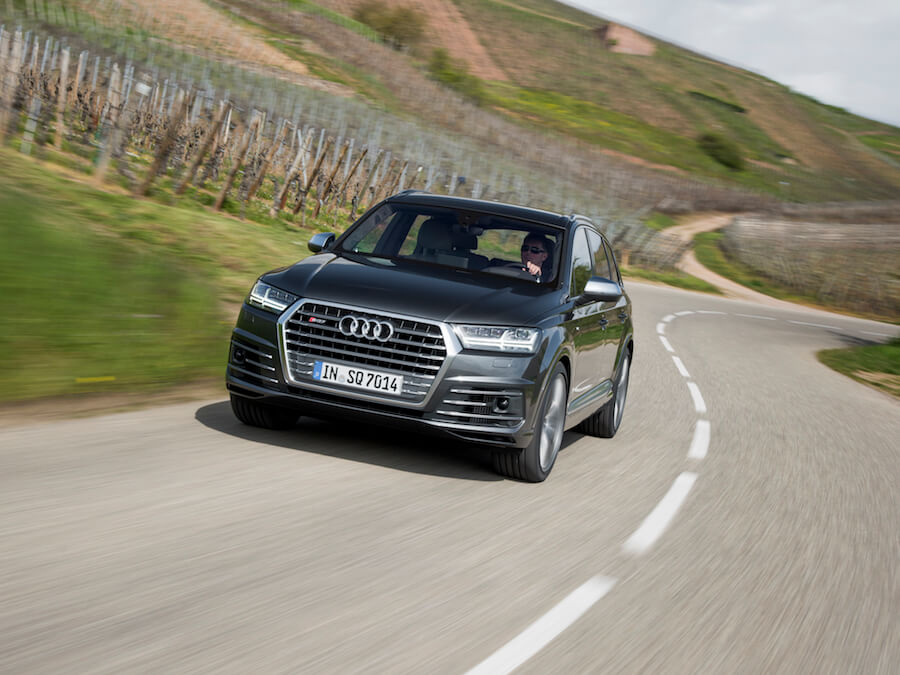 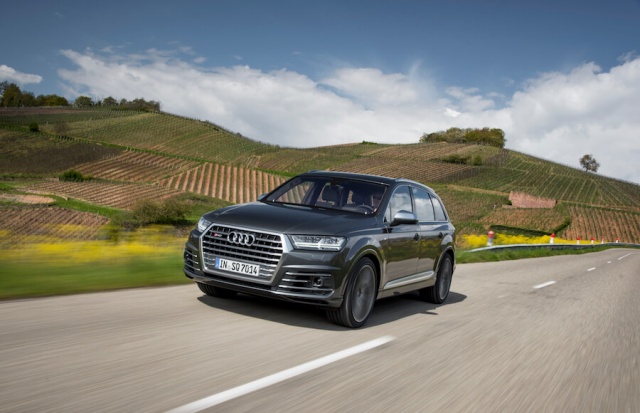 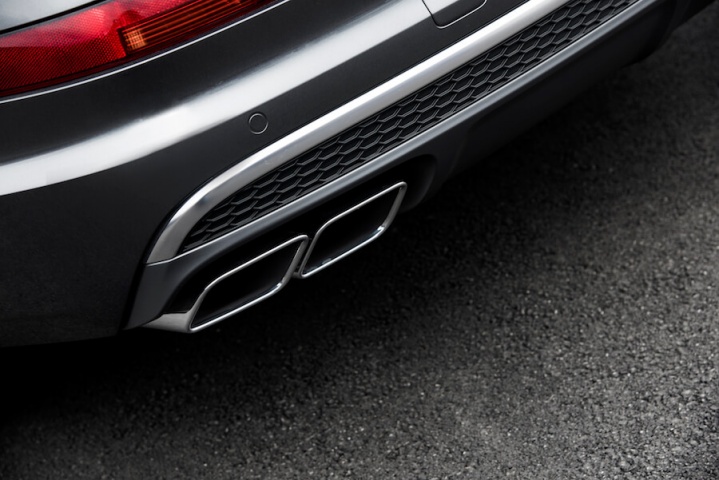 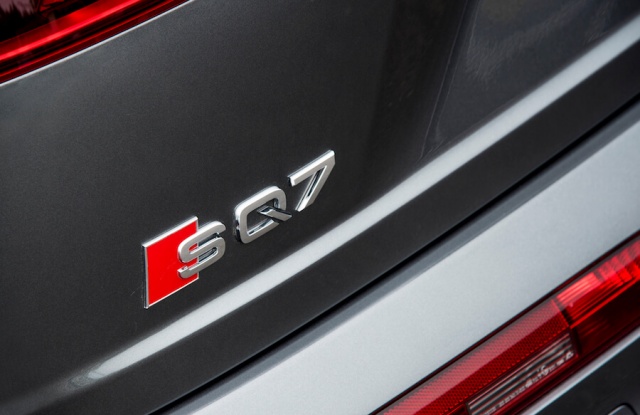 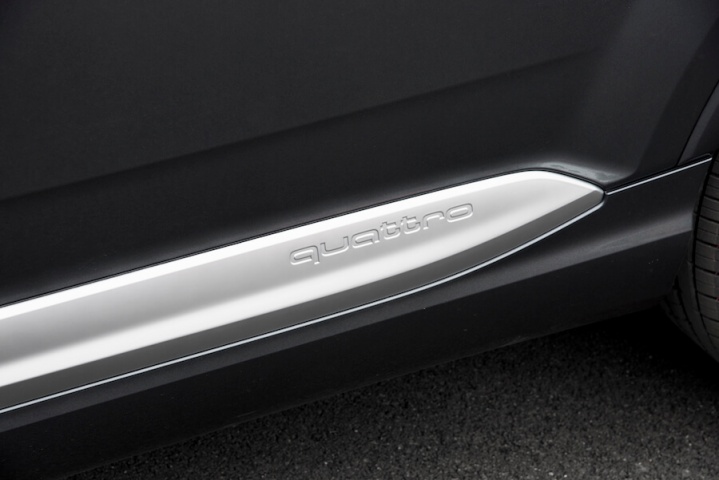 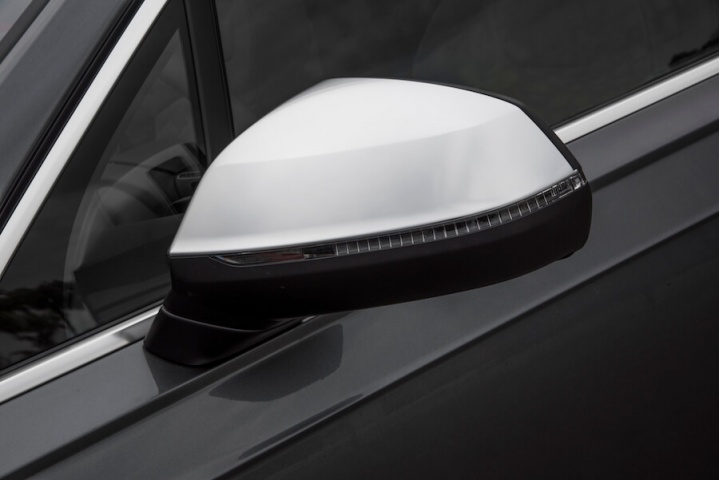 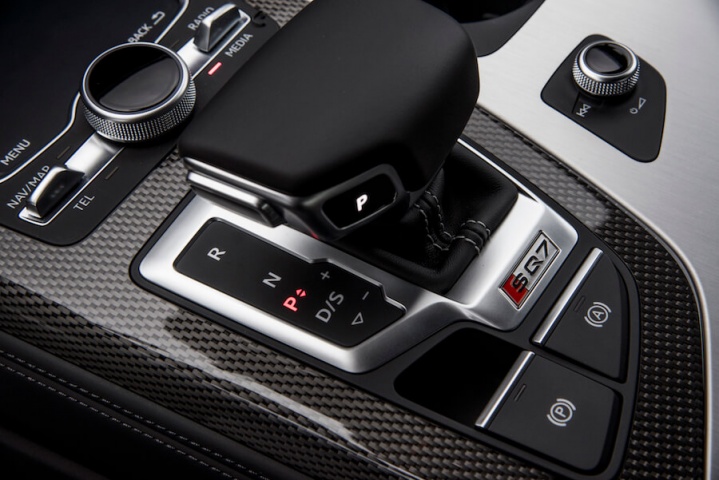 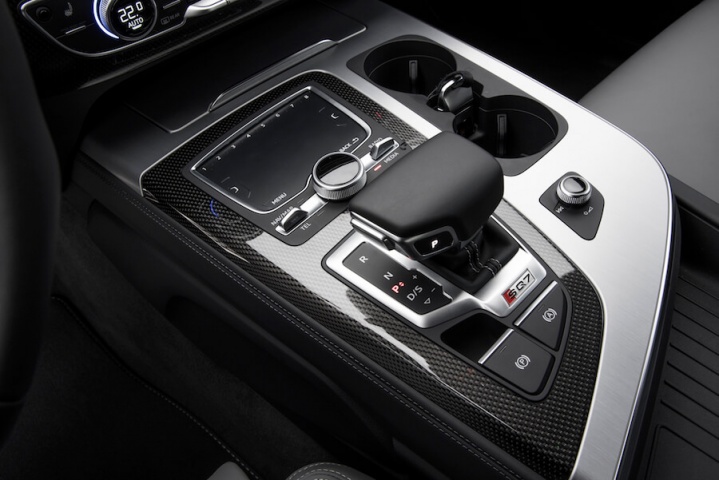 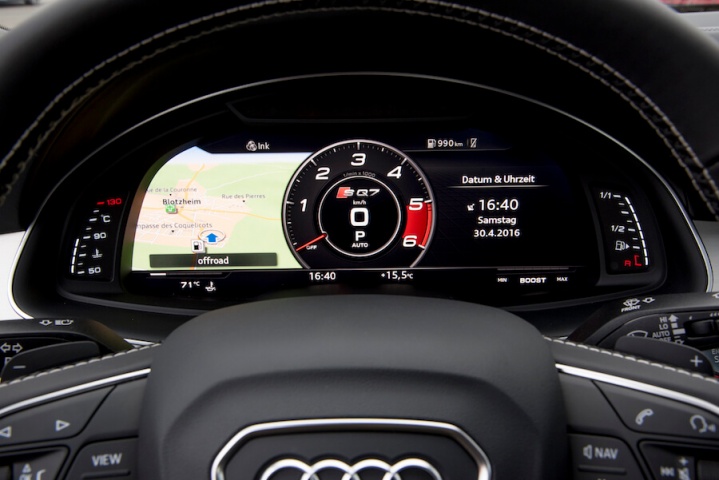 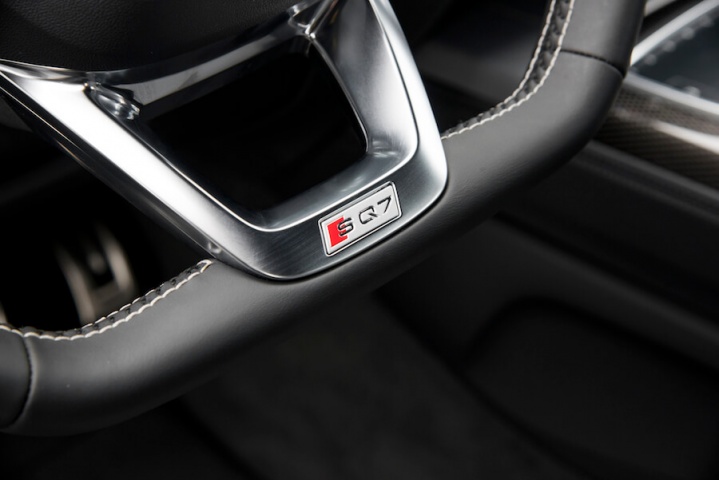 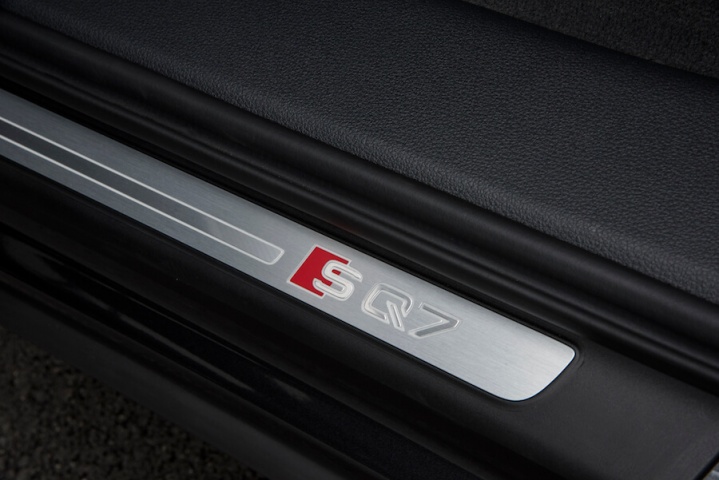 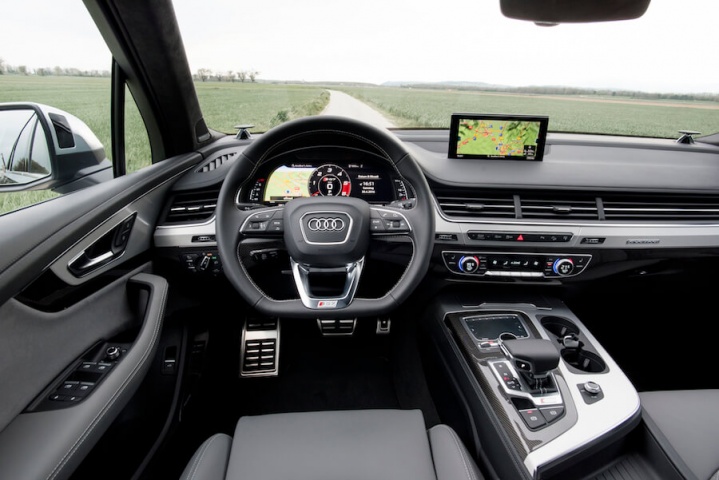 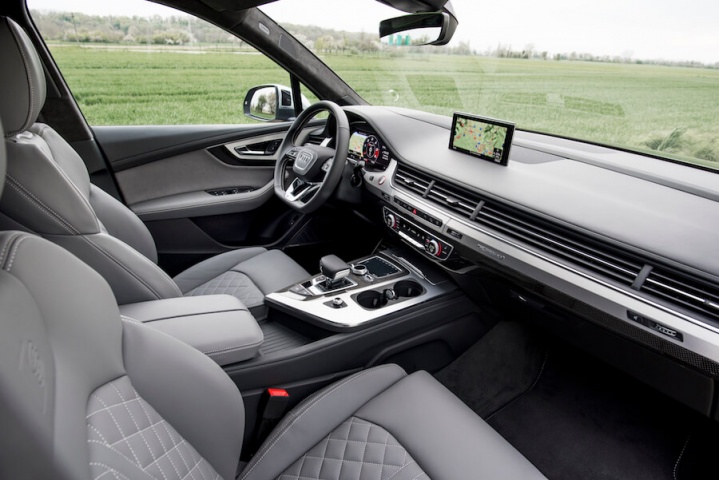 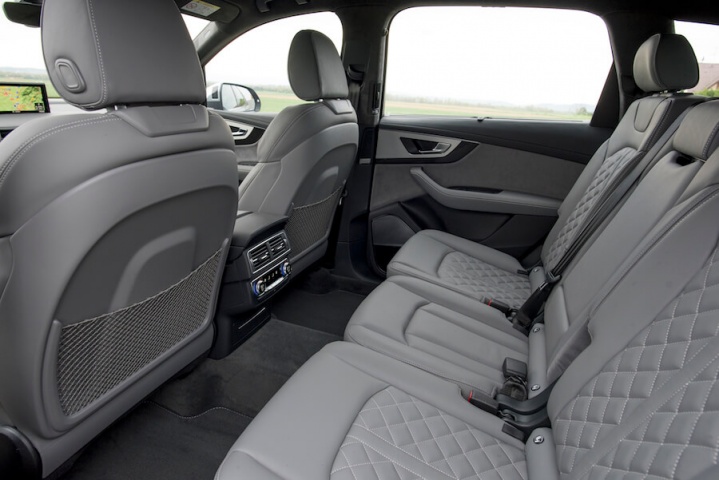 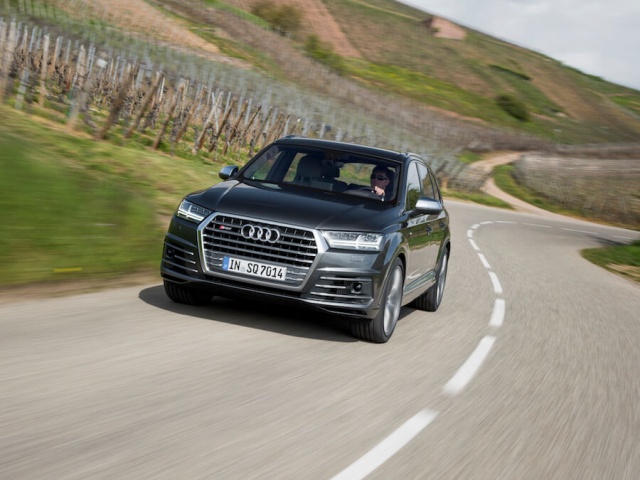 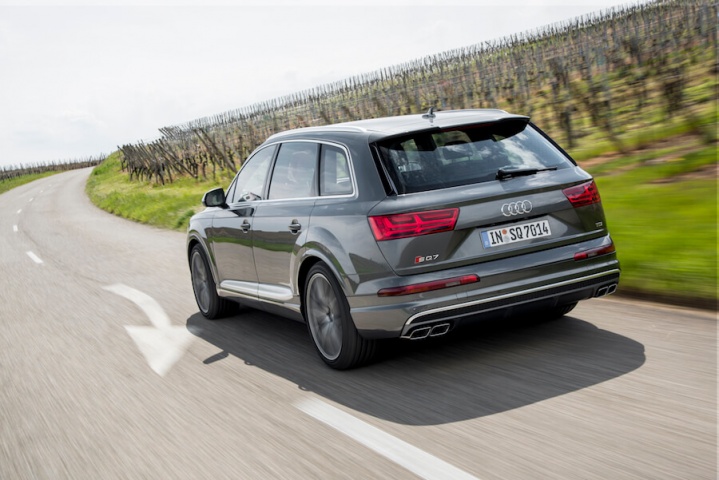 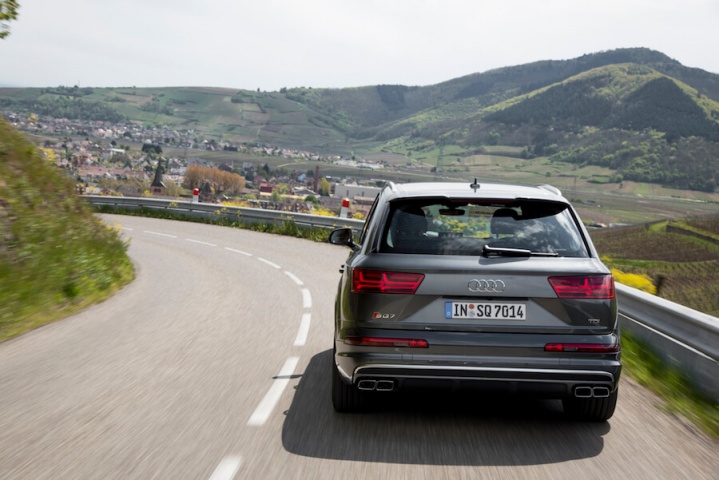 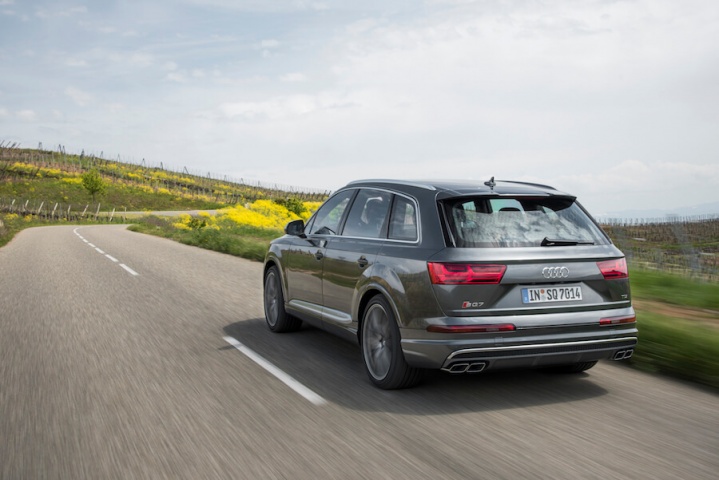 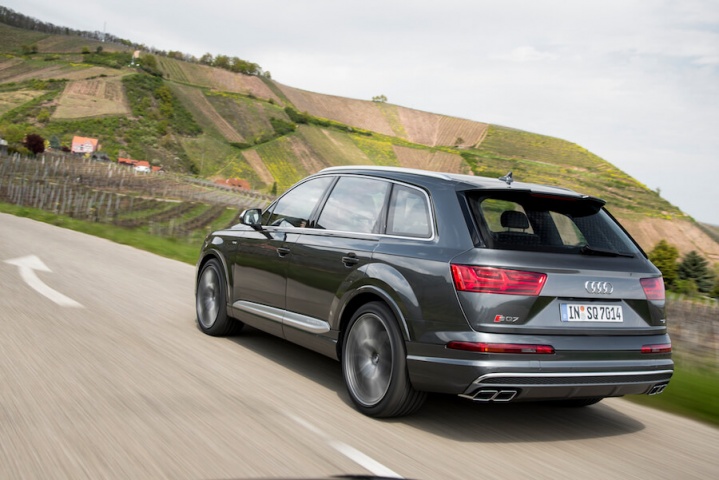 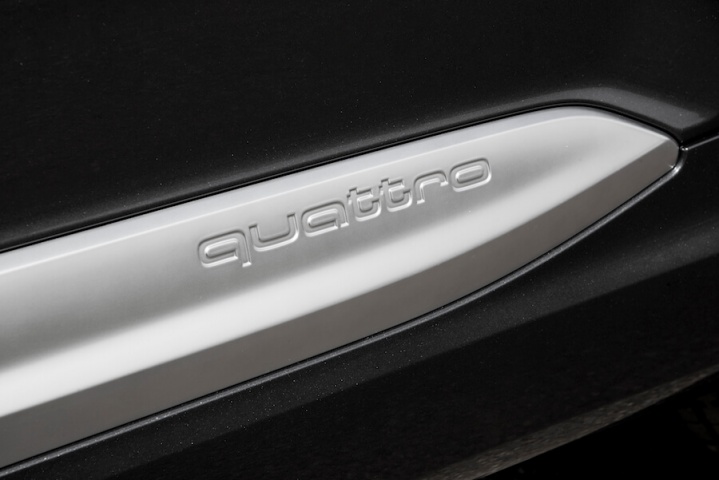 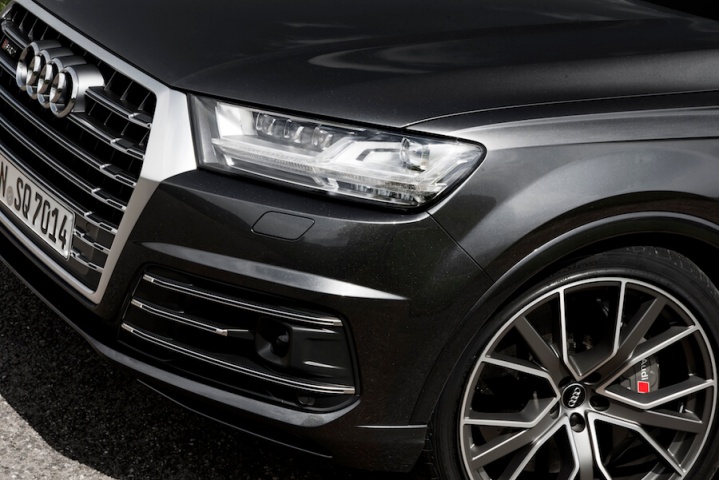 This is the Audi SQ7 TDI, the world's most powerful diesel SUV.

Stuffed with top-end technology and out-punching anything else in its class, the new Audi SQ7 TDI is an almighty new performance SUV. It's not without flaws, though, chief of which is its list price, some €20,000 more expensive than any other variant of Q7. Still, if you want the sort of power and torque to out-pace Porsches - and we're not just talking Cayennes, either - then the SQ7 fits the bill.

We're not the biggest fans of the regular Audi Q7's aesthetic and while 'S' treatment has improved things somewhat - notably with the standard-fit 20-inch wheels, which get rid of that impression a smaller-wheeled Q7 gives of having an oddly narrow track - no amount of revised bumpers, big air intakes, badges and exhaust tips (the SQ7 has four) are going to transform the large Audi SUV into a genuine looker. We'll leave it as saying it's the most appealing Q7 of the lot, then, although there are other similarly sized vehicles that are nicer to behold.

However, you know what's coming next. The interior is beyond compare and the best bit of news is that the Virtual Cockpit is standard equipment on the SQ7. Chairs with more sculpting, some carbon fibre trim, a sporty flat-bottomed steering wheel and subtle badges lift it a little beyond the regular Q7 fare, although Audi really didn't need to do a lot with the cabin to entice people inside. The SQ7's passenger compartment is, unsurprisingly, a cracker.

Before we even get to the monumental engine and its phenomenal pace, there's a whole plethora of gadgets designed to make nearly two-and-a-half tonnes of fast-moving SUV handle like a sports car. Starting with the standard kit, the SQ7 obviously gets quattro all-wheel drive, while it sits on adaptive S-tuned air suspension that can be rotated through various modes. Those larger alloys wearing low-profile tyres help with grip too, while Audi equips the driver with variable electromechanical power steering, an eight-speed Tiptronic gearbox with paddle shifts on the wheel (they're a bit flimsy, if we're honest; we'd like some more metallic-feeling items for this sort of cash) and some mighty brakes to stop the SQ7 effectively.

But you can go further than that. Top-level retardation can be yours if you chuck on a set of carbon ceramic brake discs with ten-pot front callipers, while the advanced dynamic driving package comprises three technology modules: a sport differential, a first for any Q-model Audi, which can split torque across the back axle; all-wheel steering for more nimble responses; and the new electromechanical active roll stabilisation, which uses a planetary gear set on the anti-roll bars to generate up to 1,200Nm of torque to prevent the SQ7's bulk from lolling about too much in the corners. This last item needs its own 48-volt power system, with a separate lithium-ion battery, in order to function, although that's a little disingenuous as the 48-volt circuit is also responsible for the Audi's EPC.

Ah, what's an EPC, you ask? It's an electronically powered compressor, or 'third turbo', if you will. The astonishing 4.0-litre TDI V8 engine under the SQ7's bonnet has a pair of sequential turbochargers, a smaller one for low-revs response and a larger one for high-revs rapidity, but in order to further eliminate lag, the EPC sits between the intercooler and engine and as it doesn't need exhaust gases to spin up to its 70,000rpm limit it is always 'on' in order to force air into the lungs of the motor - meaning instantaneous reactions to throttle inputs. It's remarkable technology that's bound to be seen on other turbocharged Audis before too long.

The cars we drove on the international launch were fully loaded, armed to the teeth with all-wheel drive, all-wheel steering, electronic anti-roll capability, triple-turbo madness and even the carbon brakes. So how good is the SQ7? Very good. Very, very good, in fact. There's a lovely heft to everything the Audi does, without the car ever feeling like its massive 2.4-tonne kerb weight. And such heaviness is not an issue when you've got the utterly superb Tiptronic auto firing 435hp and 900Nm (available from just 1,000rpm!) at all four wheels, as the SQ7 is monstrously quick. Even when referred back to the likes of the petrol SUV rockets, like the Range Rover Sport SVR or Mercedes-AMG GLE 63 S, the SQ7 feels more than capable of holding them to account. So it comfortably monsters its BMW X6 M50d (381hp/740Nm), Range Rover (339hp/740Nm) and even Porsche (385hp/850Nm) rivals, none of which can get close to cracking five seconds for 0-100km/h - the Audi, though, dips below at 4.9 seconds.

There's just relentless pick-up from any point on the rev counter, the Audi surging forward with real intent and a wonderful soundtrack that's more petrol V8 than diesel; it never once makes you think it's a compression- rather than a spark-ignited combustion process going on at the prow. Thankfully, as quick and wonderfully noisy as it is in a straight line, show it a corner and the SQ7's case doesn't fall apart. Those anti-roll bars work near miracles at keeping the Audi on a level keel during even the most, ahem, 'spirited' of cornering, and there's grip aplenty. So while it can never flick-flack through direction changes like a Lotus Elise, for example, it's far more competent at rapidly stringing together a succession of challenging bends than it has any right to be.

But why have we refrained from giving it full marks? Well, the MkII Q7 has always been touted by Audi as sporty to drive, thanks to its up-to-325kg weight reduction over its predecessor. But we never found the regular models to be that invigorating to steer and with two batteries, three turbos, quattro four-wheel drive and the sort of hardware that would shame a US naval aircraft carrier, at 2,330kg the SQ7 is heavier than all its competitors bar the Range Rover; that sort of mass will always blunt outright dynamic potential. The steering, solid and responsive, still has a numb patch around dead centre, while the ride is always a little firmer than is ideal; that's one area where a regular Q7 runs rings around the new SUV flagship. And whether it was just our car or a feature of all SQ7s, we're not sure, but when you back off the throttle in the low- to mid-range, there's a weird three-step judder from the drivetrain that's highly disconcerting. Is that something to do with the EPC? Maybe. We'll wait to try it back here in Ireland before confirming if this is a one-off quirk or an unfortunate by-product of the SQ7's triple-turbo trickery.

The €119,900 starting price of the SQ7 does include a healthy kit list, with many of the best items of the lesser Q7 options list bolted on for good measure (such as Virtual Cockpit, LED headlights, MMI Navigation plus, Valcona leather sports seats, a larger 85-litre fuel tank and more), but that dynamic driving package (to recap, it includes the sport differential, four-wheel steer and the active anti-roll bars) won't be cheap and we have a feeling that those three items would be sorely missed if not fitted. With high-end sound systems, Matrix LED lights, Adaptive Cruise with Stop & Go, larger alloys (up to 22 inches) and the fantastic head-up display all on the options list, we'd be very surprised if any SQ7s sell for less than €130,000 once order books open in mid-May.

Genuinely sporty SUVs are something that put certain people's noses out of joint; not possible, they say, you can't overcome the laws of physics. Well, Audi has certainly had a good go at it, chiefly by throwing every bit of technology it currently possesses into the SQ7's frame. The net result is naturally not as delicate and biddable as a genuine sports car, but then that very sentence rather sums up just how superb a job Audi has done on this rapid SUV - to even dare to think of such a large, seven-seat vehicle in such terms is something to be commended. Better steering, a comfier ride and perhaps the active anti-roll bars as standard would have seen us give the Audi SQ7 a higher overall mark, yet even so, this gargantuan machine has no problem living up to the hype generated by being the most powerful diesel SUV in the world. It's a mightily impressive machine and the most likeable second-gen Q7 yet. 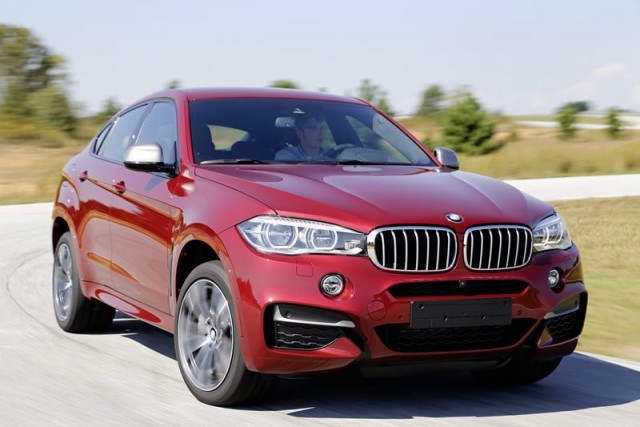 BMW X6 M50d review
BMW X6 M50d vs. Audi SQ7 TDI: this is a 'traditional' triple-turbo unit, with its unusual arrangement of three blowers making for an intriguing talking point; no hiding the fact the X5/X6 is a lot older than the Q7, though. 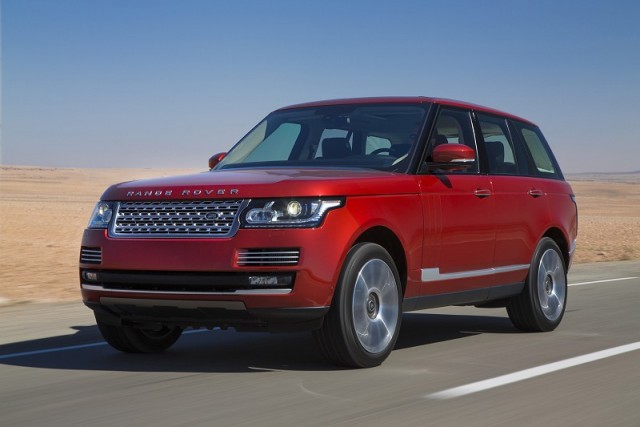 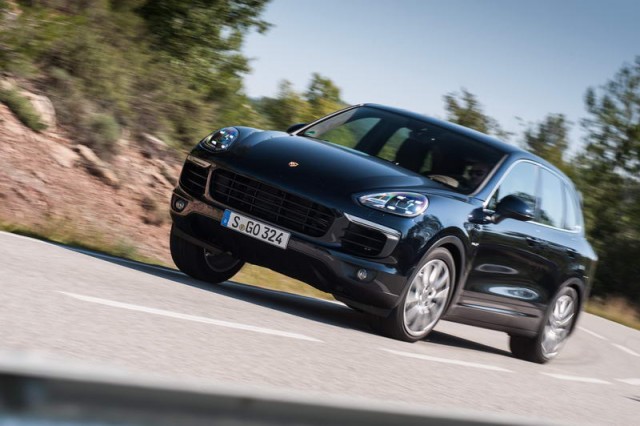