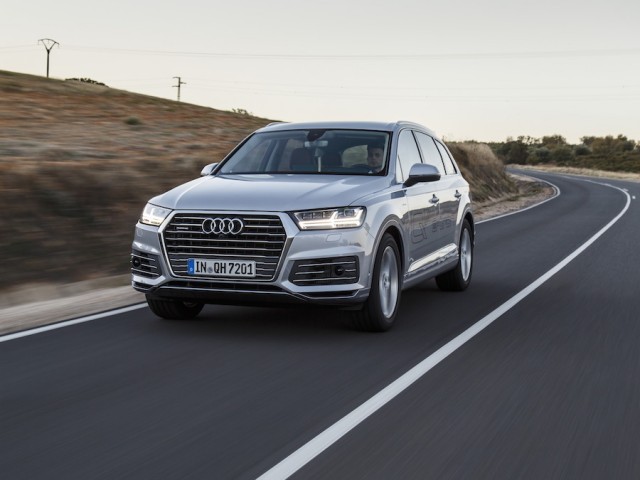 While there's little excitement to be had from driving the new plugin hybrid Audi Q7 e-tron, it is a fascinating piece of high technology, offering a hint of a lot more to come from Audi in terms of electrification of the car. That aside, it's beautifully refined, no different to a regular TDI diesel version to drive and ridiculously cheap to tax. Depending which version of the Q7 you were looking it, it could make a lot of sense.

I'm not the world's biggest fan of the new Audi Q7's styling, but I'll concede that its sheer size gives it presence and it undoubtedly looks modern. Buyers can make up their own mind on that one. The e-tron model, based on the SE specification, can be identified by its bespoke 20-inch alloy wheels, plus of course the charging flap on the left of the vehicle near the rear.

Inside, it's difficult not to be impressed by the Q7. It's staggeringly well put together and there's no switchgear anywhere in the world at any price that feels better to use than this Audi's. It's huge inside too, with a noticeably wide centre console separating the driver from the front passenger and loads of oddments space. Because of the lumping big battery pack mounted above the rear axle the e-tron model loses its seven-seat layout and Audi says it also loses 120 litres in boot. The e-tron model is, however, a considerable 375kg heavier than the conventional diesel model.

We've found the regular 3.0-litre V6 TDI diesel Q7 game for a little spirited driving if you really want it to be and so long as you select Dynamic from the Drive Select system, but it's better in Comfort mode wafting along on its ample torque and soaking up all manner of road imperfections, while still covering ground at a surprising pace. The e-tron model seems to reinforce this, encouraging the driver to take it easy, drive efficiently and relax in the surroundings.

Aside from the usual Drive Select options (present and correct), the e-tron driver can choose one of four hybrid settings. The EV mode priorities electric-only driving. With a fully charged battery (possible in as little as two and a half hours from some charging points), Audi claims that the electric-only emissions-free range is 56 kilometres. In this guise the car is whisper quiet and is ideal for town use or when you're stuck in traffic, though it can theoretically exceed 120km/h using the transmission case-mounted electric motor alone - it just won't go very far on electric power if you drive at those speeds. In Hybrid mode the system is left to its own devices to maximise efficiency at any given time depending on conditions. Battery Charge mode actively charges up the battery for use at a later stage, while Battery Hold maintains the battery charge level.

Although the hybrid system has to manage a myriad of sub-systems and functions, it's seamless in operation and you don't need to bother with any of the modes if you just want to get in and drive. If you put your foot all the way down on the accelerator then the electric motor assists the TDI diesel for maximum acceleration, but there are also coast and recuperate functions to eke out every last kilometre from a tank of diesel. Audi reckons that virtually all everyday braking is done with the electric motor, acting as an electricity generator in the process, to charge the battery. In fact, that's the only minor gripe we have with the car - the brake pedal feel is inconsistent, presumably because of the regenerative effect.

The 3.0-litre V6 TDI diesel engine itself is very quiet and cultured, audible only when you summon up the full performance, but even then it's smooth and not at all unpleasant sounding. A 0-100km/h time of six seconds for this Q7 is impressive, though it never feels particularly quick unless you really ask for full power. It feels heavy in the way it reacts to input and in the way it drives and in its default mode it actively tries to teach you how to drive more efficiently, with an active accelerator pedal that resists pushing at different points depending on the driving mode and even a prominent 'lift-off the accelerator' icon in the head-up display.

Before grants, the Audi Q7 e-tron is €91,125, but thanks to a whopping €7,500 in grants it costs the Irish buyer €83,625 (plus €850 for 'delivery'). That puts it in a strong position within the existing range, where the most expensive Q7 3.0 TDI with just 218hp is €82,890 and the 272hp variant starts at €78,125. The specification of the e-tron model is based on that of the Q7 SE, though with specific alloy wheels and a charging cable thrown in. Buyers can upgrade to the SE Business specification, which, among other things, adds soft Valcona leather upholstery, sports seats with electric lumbar support and the Virtual Cockpit digital dashboard. As with the Audi A3 e-tron, the plugin hybrid Q7 will only be sold via e-tron specialists, which are Audi Cork and Audi North Dublin.

BMW X5 xDrive40e: although based on a petrol engine, the hybrid X5 is the Q7's closest rival - equally expensive too.

There's little to fault the new Audi Q7 e-tron on. It's exceptionally refined and has a decent electric-only driving range, yet, unlike other plugin hybrid SUVs on the market, is powered by diesel. That makes it very similar in feel to the conventional TDI diesel models, which will find it friends here. Thanks to grants, its purchase price means it slips in between existing Q7 TDI models, though it's still expensive. For those with deep pockets and the desire to drive one of the most high-tech SUVs on the market, the e-tron is, nonetheless, the one to have.