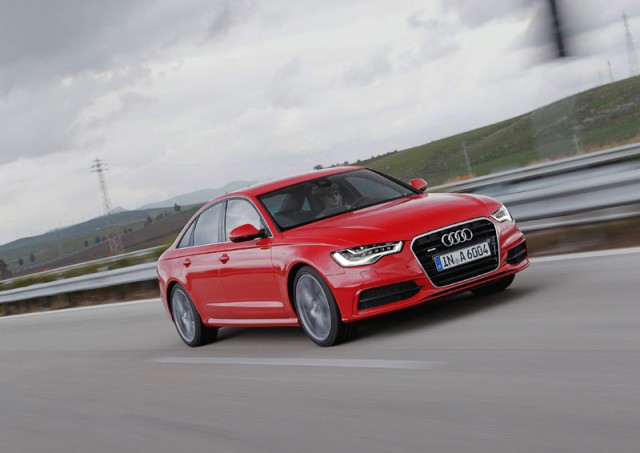 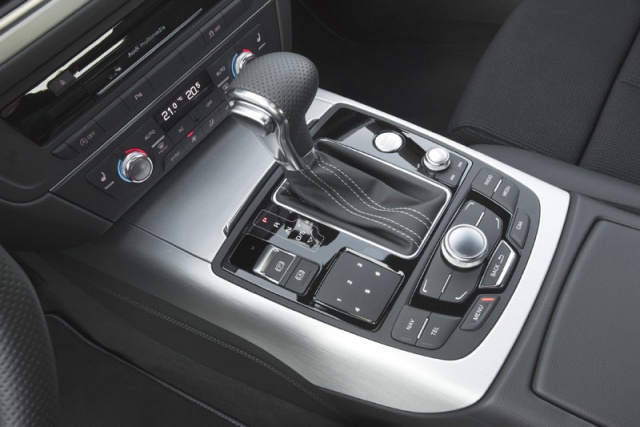 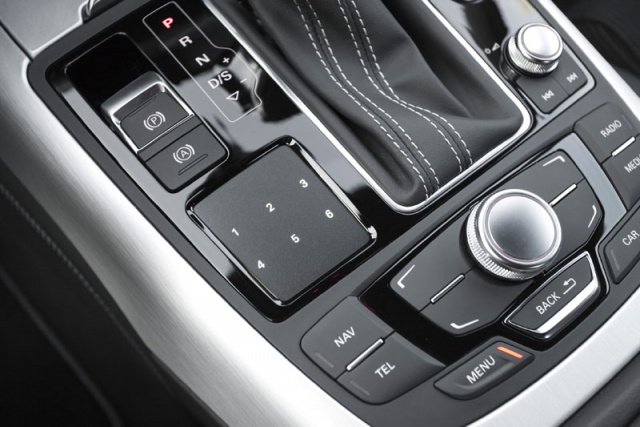 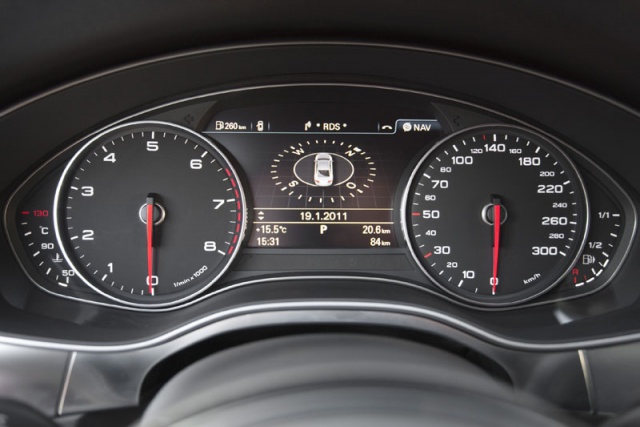 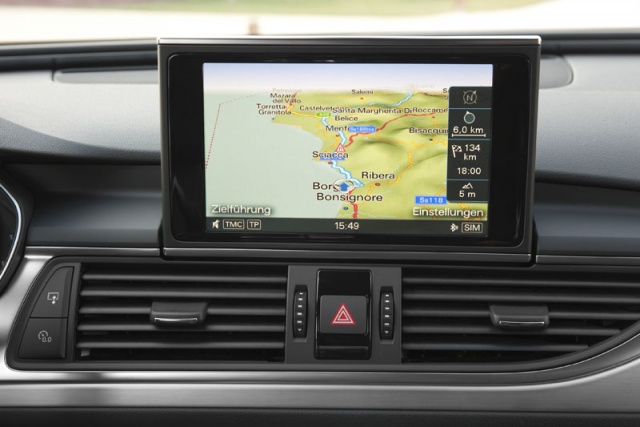 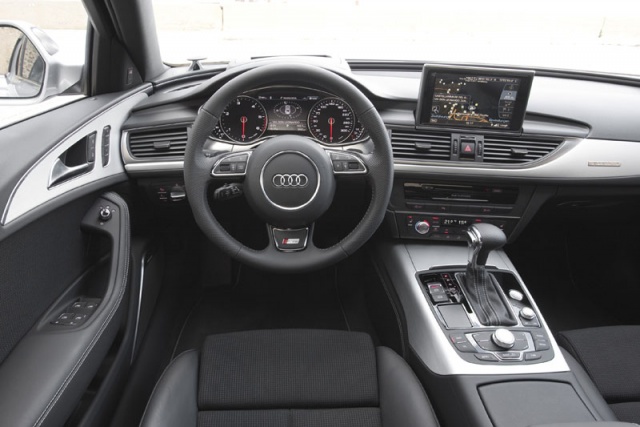 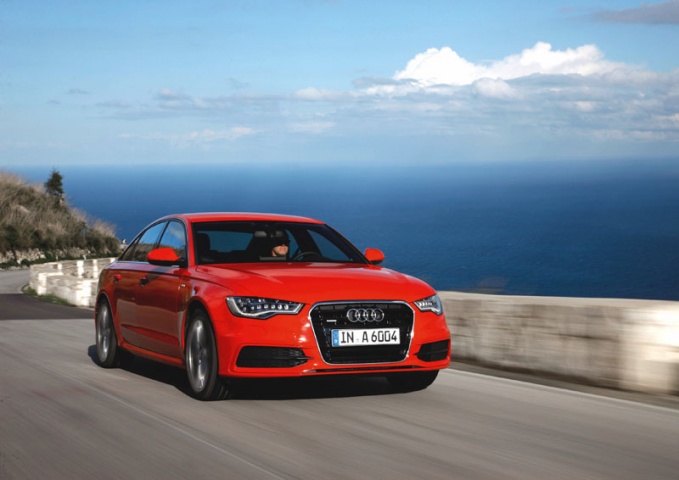 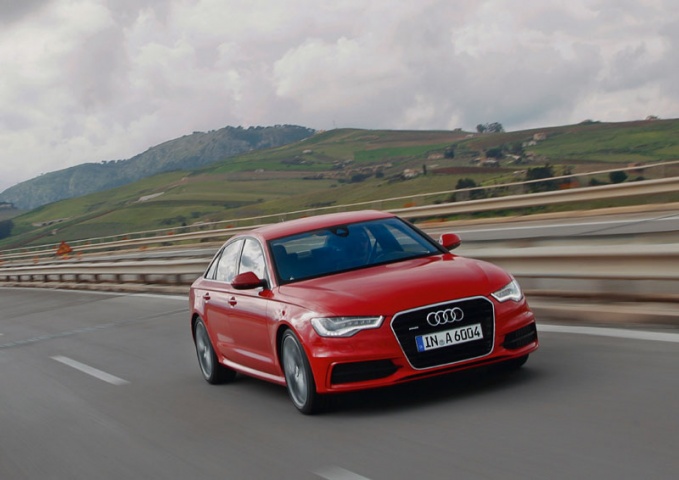 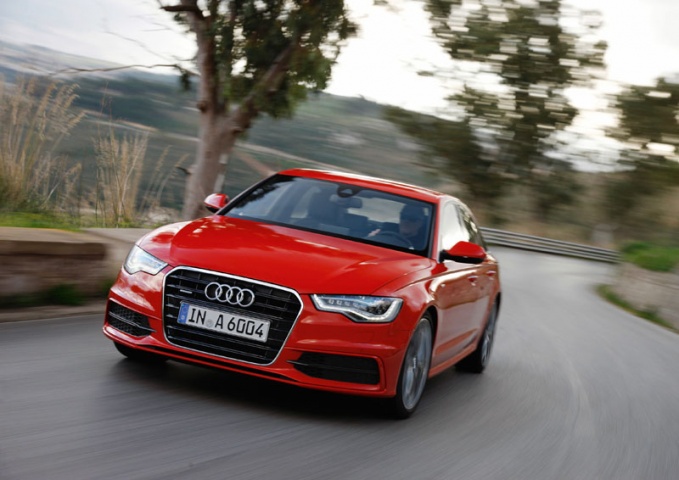 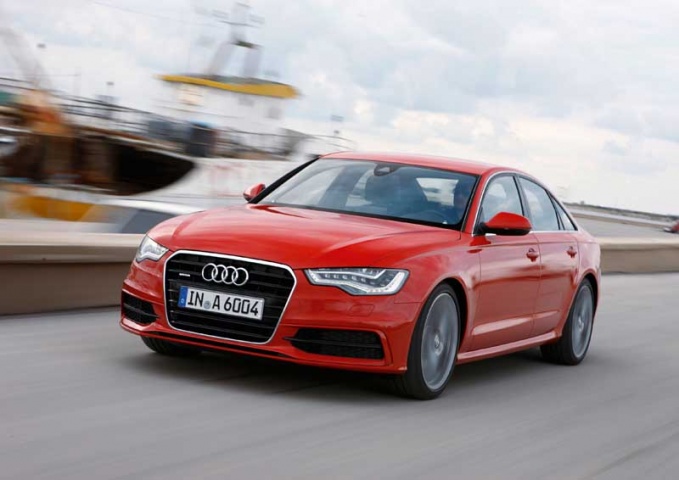 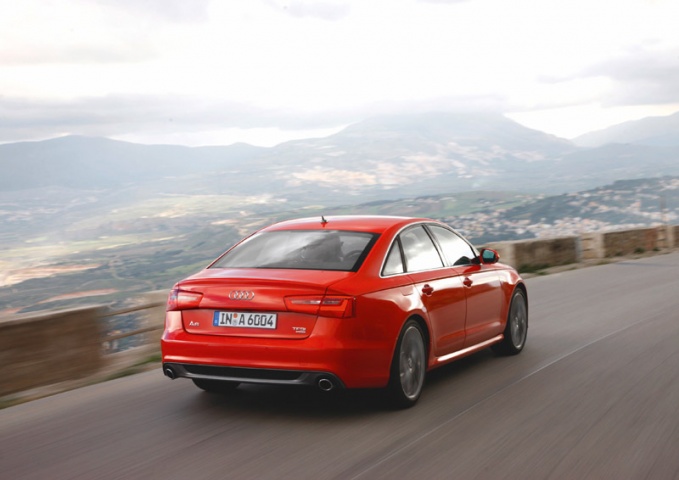 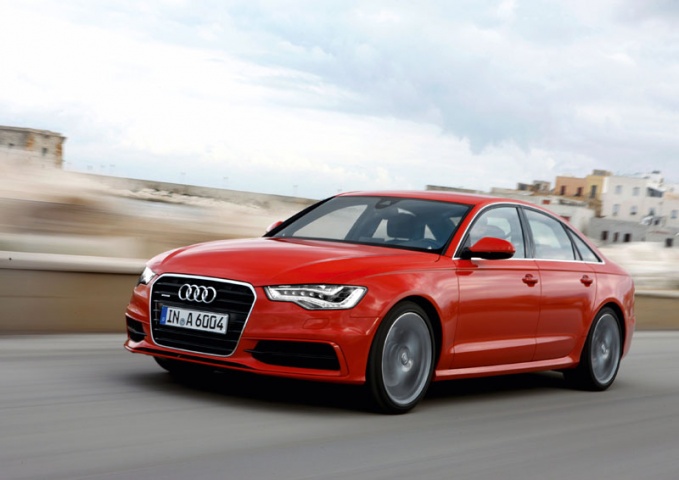 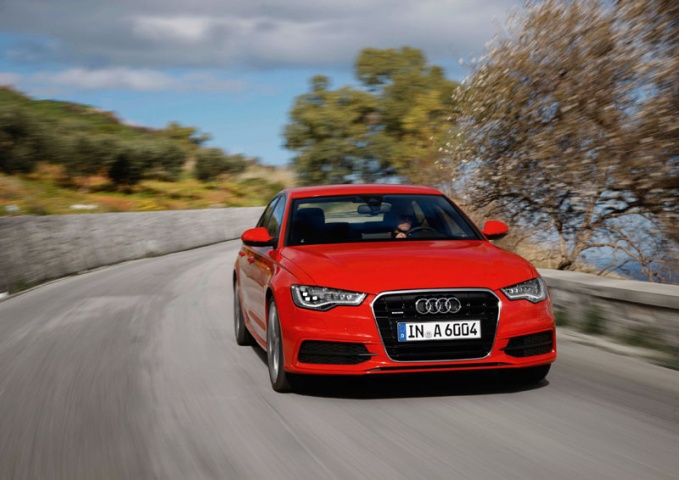 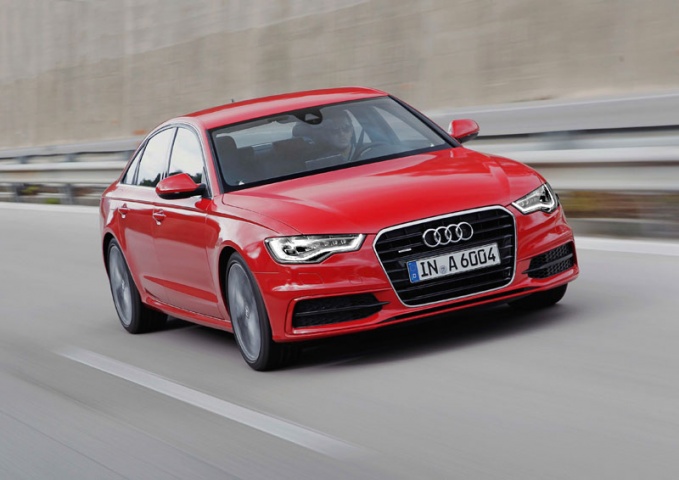 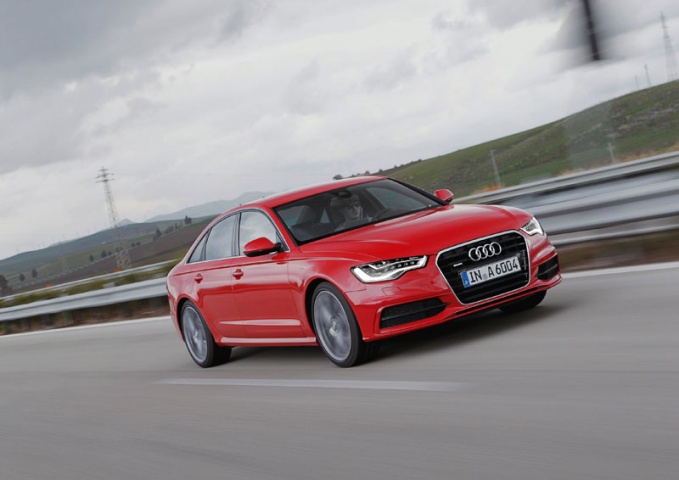 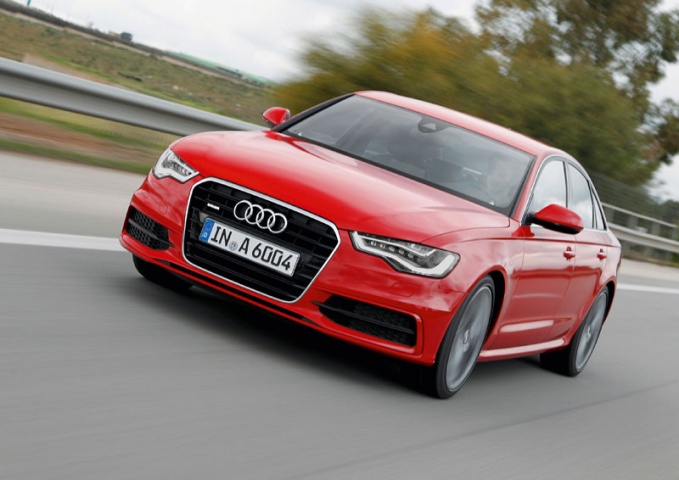 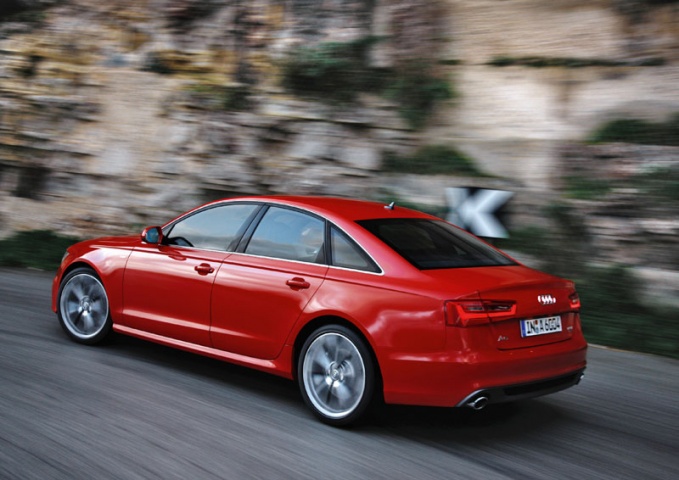 Audi's new A6 sets out to break the monopoly of the 5 Series and E-Class.

You won't be surprised to hear that with its hugely important mid-sized executive saloon, Audi has opted to play it reasonably safe with the design. That is not to say that the new Audi A6 is bland, but anyone who has seen the A5, A7 or A8 won't get a massive shock when they see this new model. There is very much the family face in evidence and the same is true of the rear end, which could really come from any car within the range.

Audi A6 customers like their car to be elegant on the outside and that is exactly what this car is. Where the real work has gone on is in the car's truly marvelous interior. Of course, there is always a note of caution that the cars we drove had most of the options list added to them, but what is for certain is that the fit and finish of the new car is truly first class. We would confidently say that, along with the Jaguar XF, this is the best interior in this segment.

There is a dazzling array of options you can add to this new car, including night vision, head-up display, a road sign recognition system and active lane assist. There's also an astonishing Google Maps-based satellite navigation system. Our test cars were fitted with Wi-Fi, which could operate up to eight devices and actually worked really well.

In Ireland the biggest seller is going to be the entry-level diesel, the A6 2.0-litre TDI, much in the same way as the cheapest diesel is the big seller in both the BMW and the Mercedes-Benz equivalents, but with 177hp the Audi's engine isn't short on poke.

We threw our towels down on this model so we could spend the greatest amount of time in it. Twinned with the six-speed manual transmission, the car is lighter than before and also much quieter. Even this entry-level four-cylinder engine is whisper quiet and, despite just being front-wheel drive, it showed pretty impressive road manners on what were some truly awful, rain-soaked roads. Conditions were too bad to really explore the car's handling to any great degree but in terms of comfort, even this steel sprung model is cosseting.

On the second day we tried the A6 3.0-litre TDI, which we had thought would sell in Ireland in very small numbers. But given the fact that it, like the four-cylinder, was a clean engine in motor tax Band B (and comes with a quite reasonable price tag), Audi's prediction that this version could make up around 30 percent of sales might not seem to be as ludicrous as it first sounded.

However, if I was a betting man, I would still stick €20 on there being 95 percent of Audi A6s coming with that four-cylinder diesel.

Naturally, adding things like quattro all-wheel drive, the excellent S-tronic automatic transmission, air suspension and the clever sports differential further enhance the A6, but even the base model it good.

The entry-point of the new Audi A6 is the 2.0-litre TDI model and that offers you 177hp, 380Nm of torque, while in terms of standard equipment you get Audi Drive Select, which allows you to change the throttle map, steering feel and gearbox response to suit your driving mood. You also get Milano leather, 17-inch alloy wheels, Bluetooth, dual-zone climate control. All this is for €42,500 before you stick on plates and have it delivered, which is pretty good value. Although it is coming in a little more expensive than the basic BMW 5 Series and Mercedes E-Class, it is better equipped than the 5 Series and has more power than the basic Mercedes-Benz.

There will be petrol models available, but the Irish buyer will largely ignore the 2.8-litre FSI and 3.0-litre FSI variants. An Avant version (estate) will follow later in the year, as will a hybrid version of the Audi A6. The fact that this car won't go on sale in Ireland until April is likely to handicap sales in 2011, but Audi is hoping that 2012 will be a strong year.

Poor weather conditions on our test drive didn't really allow us to get a proper assessment of the new Audi A6, but certainly the quality, refinement and innovations will do enough to have Mercedes-Benz and BMW looking over their shoulders nervously.