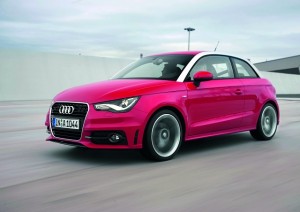 Has Audi really created a MINI beater? We drive the new A1 hatchback.

Without a doubt, the A1 is the most hotly anticipated Audi since the R8, if far more relevant to more buyers, certainly here in Ireland. The company is billing its new model as a shrink-wrapped Audi, which means it should have all the premium segment ingredients from best sellers like the A4 and A6 housed in a stylish three-door package.

The huge trapezoid grille and slim but aggressive R8-style headlamps leave you in no doubt that the A1 is an Audi. There's something faintly Fiat 500 about the curvy roof line that blends into the rear though, while the back end itself is fairly bland, and the chunky taillights seem a little out of place, especially against the white paintwork of the car in our pictures.

Audi is clearly keen to appeal to customers who go in for the cute and the diminutive. It reckons that most buyers will be much younger than its usual clients and thinks that up to 50 percent of A1 drivers will be female.

Customisation is high on the A1 agenda, too. The door and roof pillars can be ordered in a number of different colours (separate to that of the main body colour) and there are also various trim combinations for the interior with matching fabric on the seats, centre console and doors.

The cabin itself is typically Audi, although on a smaller scale. Build quality is superb as always and the staggered centre console is functional and easy to use. The 270-litre boot and so-so rear legroom aren't bad when you consider the A1's small proportions, but they won't break any class practicality records either.

Irish prices won't be finalised until July, but the starting price will definitely be less then €20,000 for the entry-level model with an 86hp 1.2-litre TFSI engine. At the top of the pile (initially at least) will sit an S Line version fitted with the 122hp 1.4-litre TFSI unit and a seven-speed S tronic gearbox. A mid-range Sport specification is also available, as is a 105hp 1.6-litre TDI turbodiesel engine. Those figures put the A1 firmly into MINI territory, but it's more expensive than any Fiat 500 - with the exception of the Abarth hot hatch.

All A1s come with stop-start technology, regenerative braking and an economy-themed gear shift indicator, so the green side of things is well covered. Audi claims that the A1 also has the lowest basic weight of any car in its class. When fitted with the smallest 1.2-litre TFSI engine, it tips the scales at a mere 1,040kg.

Like most current Audis, the A1 does its job exceptionally well. The white car in the pictures is a 1.6 TDI model, which is refined, has plenty of punch and is extremely cheap to run -it uses 4.0 litres/100km (70.6mpg) and emits 105g/km of CO2, so it costs only €104 per year in road tax. The five-speed manual gearbox has a short, firm and precise throw, though the diesel engine could do with an extra cog as an overdrive for motorway speeds.

The 1.4-litre TFSI engine with the S tronic gearbox is a different animal entirely. The gruff exhaust note and eager engine are great fun and it will manages 5.2 litres/100km (54.3mpg) in Sport spec (a little worse in S Line trim). It seems a tad overwhelming for such a small car though, and there's a bit of a delay between the driver pulling on the wheel-mounted paddle and the actual gear change.

The saviour of the engine range is the entry-level 1.2-litre TFSI petrol unit. This is the version that Audi is expecting to sell the least of in some markets, but it suits the A1 far better than the two others and could do really well in Ireland. It has the least power of the lot but the engine is very willing and loves to be revved, which is what a small fun car should be about.

As for the handling, the steering is firm and direct and there's plenty of grip. Like we said, the A1 does its job very well, but it isn't particularly exciting to drive.

Obviously the three-engine and three trim level line-up is just the starting point. Although it won't make any difference to VRT and road tax in Ireland, Audi is working to get the 1.6 TDI A1 below the 100g/km CO2 mark. A five-door version of the A1 is looking distinctly likely and could be on the way as soon as 2011, while the hot hatch S1 version may arrive before the end of 2010 with a higher powered version of the 1.4-litre TFSI engine.

Like the rest of Audi's range, the A1 has sufficient appeal to do exceptionally well and the superb build quality and good all-round package can only help. It doesn't quite live up to all the hype, though. It's not as good to drive as the MINI and lacks the retro factor of the Fiat 500. It isn't even a bit bonkers like the Nissan Cube. The A1 is very good, but in a clinical, professional and efficient way. In short, it's the perfect small Audi.