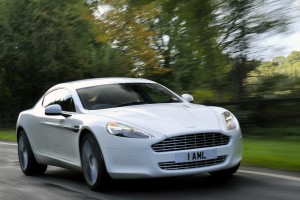 The gorgeous four-door Aston Martin Rapide may not be a car of our times, but that makes it even more special. We drive it on Irish roads.

Gone are the days when the well-heeled, successful entrepreneur/footballer/company director/crime overlord had to choose between a sports car and a four-door, four-seat saloon. Admittedly, gone too are the days when the phrase 'well-heeled' was used regularly... Anyway, for those who still have the ability to make their repayments, choices now include the Porsche Panamera, the Maserati Quattroporte and this, the latest addition to the four-door sports car market, the Aston Martin Rapide.

Pictures don't convey how successful Aston Martin has been in essentially stretching the shape of its DB9 model to accommodate an extra pair of doors. This is a truly spectacular car, from any angle. Park it next to the DB9 and it looks markedly different, while obviously sharing its DNA. Our favourite aspect is the rear haunches, the sculpting of which you can't really appreciate until you're right next to the car.

Inside, the Rapide is just as special. It adopts the now-standard Aston Martin dashboard, including the crystal 'key'. Leather and aluminium are used extensively, as is Alcantara. It's beautifully made. The rear seats are a little snug, but once you're in it's quite accommodating. Just don't expect room to stretch your legs. The boot is a usable size and cleverly, the rear seat backs fold completely flat to allow the loading of bigger items. Did you ever expect us to talk about practicality when reviewing an Aston Martin?

As Aston Martin doesn't yet have a dealer in Ireland the price of €270,000 is estimated from the price in the UK and the likely VRT due on importation. Needless to say it'll not be a common sight. For that price there's little missing from the list of standard equipment. Included are: premium Bang & Olufson BeoSound audio with iPod, auxiliary and USB connections; full leather; heated front and rear seats; climate control; Bluetooth; HDD satnav; 20-inch alloy wheels; and adaptive damping. Options include rear seat entertainment and differing wood finishes inside. Specifying your Rapide is more about the customisation of the colour and interior trim than it is paying more for floor mats...

We'd forgive anyone for buying the Rapide based on its appearance alone, but that is not the only trick up its sleeve. Aston Martin bills the car as a four-door sportscar - rather than a luxury car - and that's precisely what it is. Despite its considerable size, the Rapide is easy to hustle down a twisty country road. Its longer wheelbase may hinder agility a fraction, but it aids stability and gives the driver a lot of confidence in the car's ability. Grip levels are high, body control is exemplary and there's more than enough power from the 6.0-litre V12 engine to convince the rear tyres to relinquish a little grip when the mood or road allows. Accompanying this is a super-sharp steering rack, good brakes and an engine note that thrills from idle all the way to its redline. It all makes for an engaging experience.

And yet the Rapide has a docile side too. Allow the automatic gearbox to think for itself, turn off the Sport button and it's happy to waft along at speed with little fuss or demand on the driver. It'll never compete with the likes of a Mercedes-Benz S-Class for ride comfort, but at the same time it's not uncomfortable.

Aston Martin admits to having its eye on a bespoke showroom in Ireland. To date it has yet to find a suitable location, which would probably be in Dublin. A boutique-style premises is envisioned, though of course its presence would also necessitate an Aston Martin service centre, with a customer experience befitting the brand. Given the state of the economy that may be some way off happening.

Very few Aston Martin Rapides would ever be sold in Ireland - regardless of how much money there is floating around. However, it's a beguiling car that offers keen drivers a real alternative to the usual German-built luxury saloons. That it's beautiful to look at is merely a bonus.