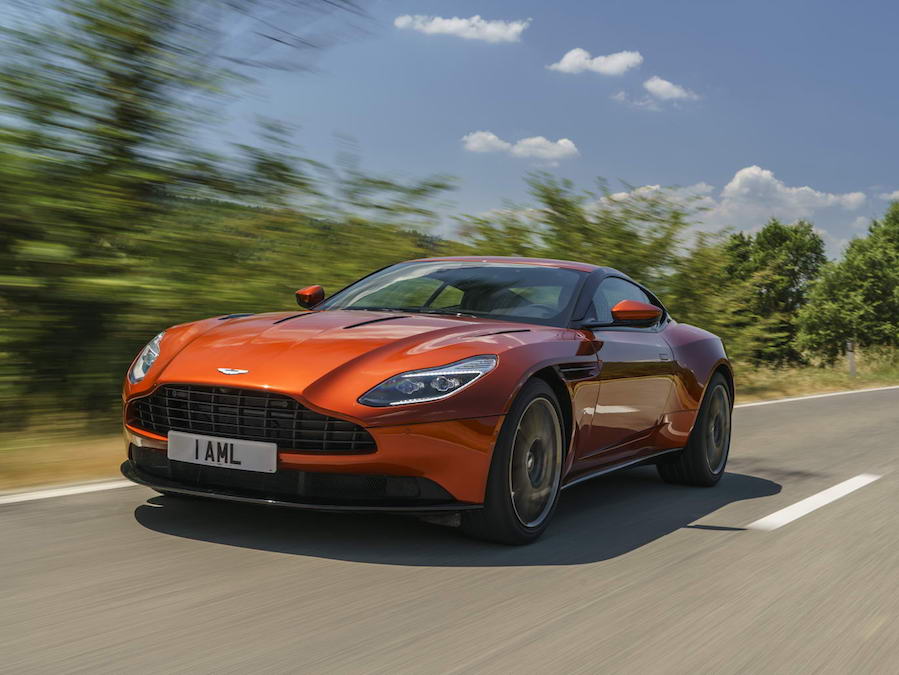 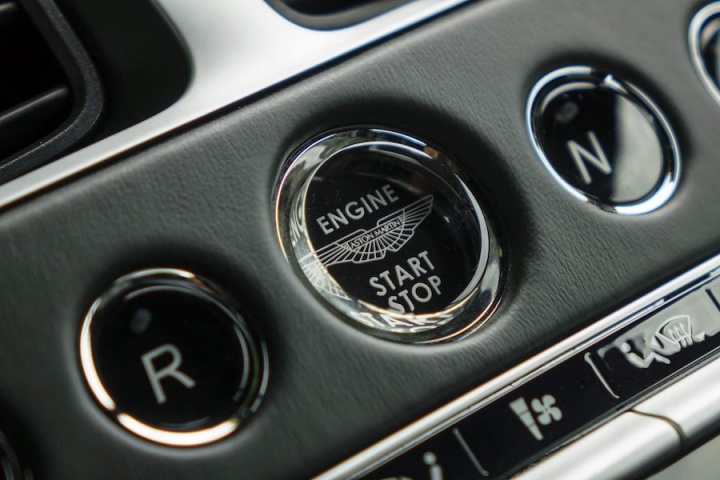 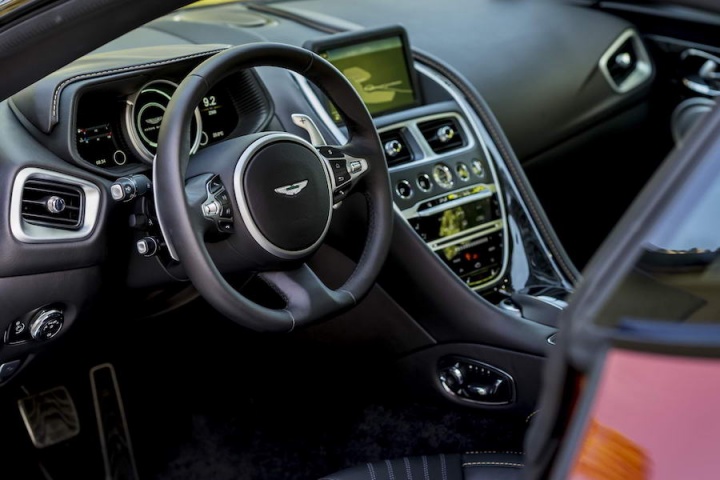 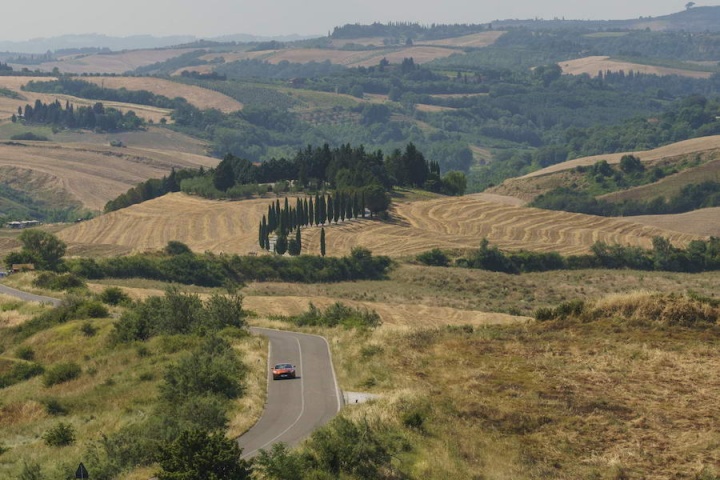 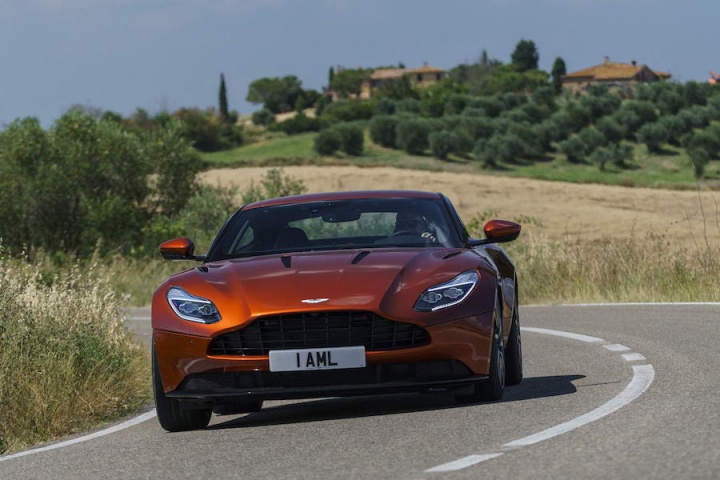 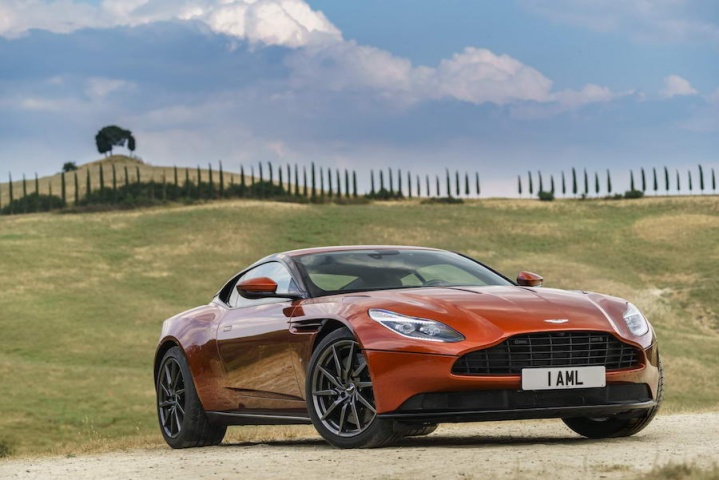 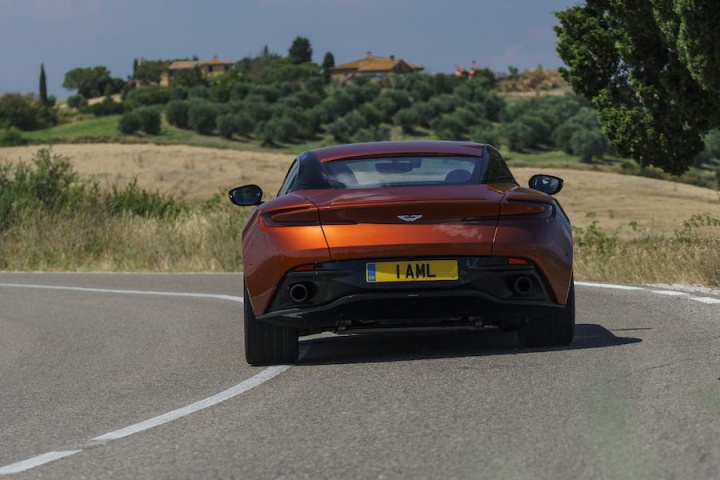 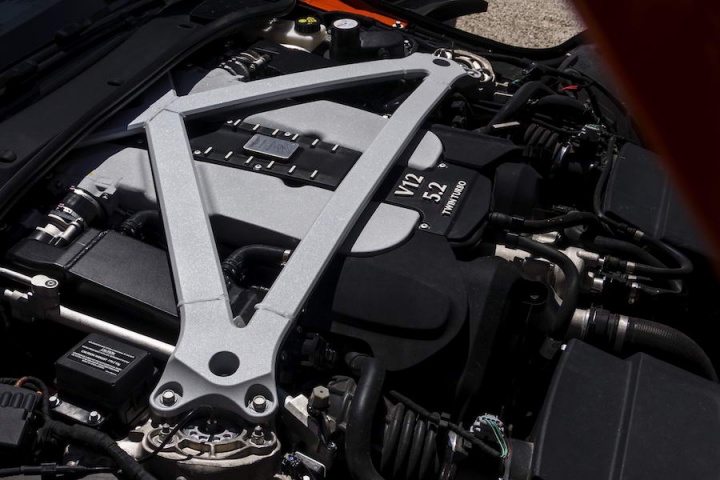 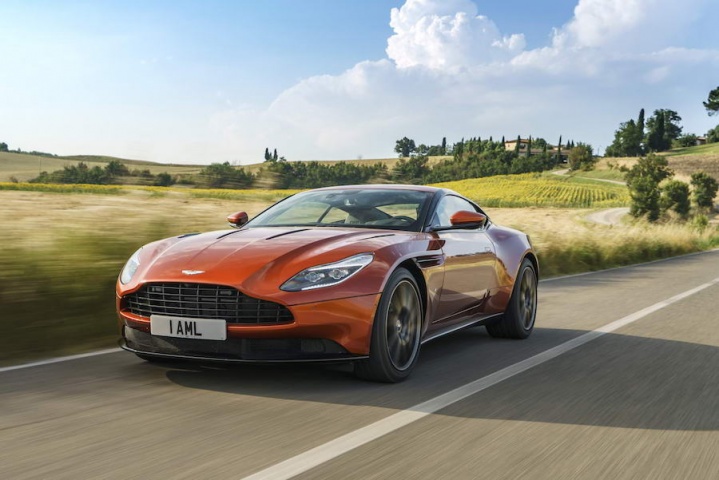 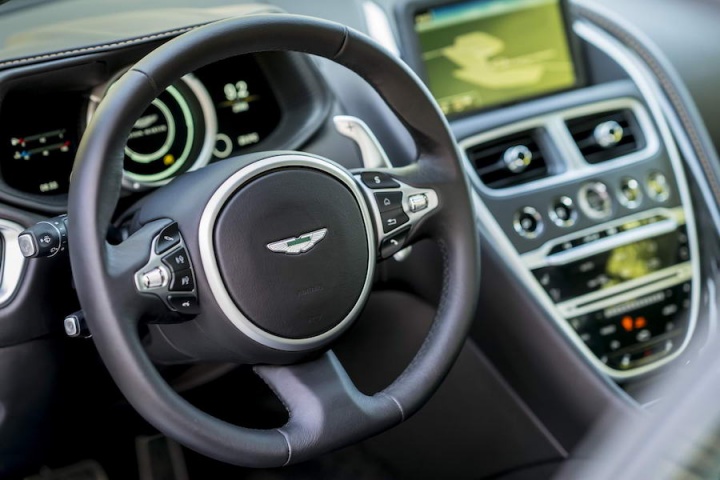 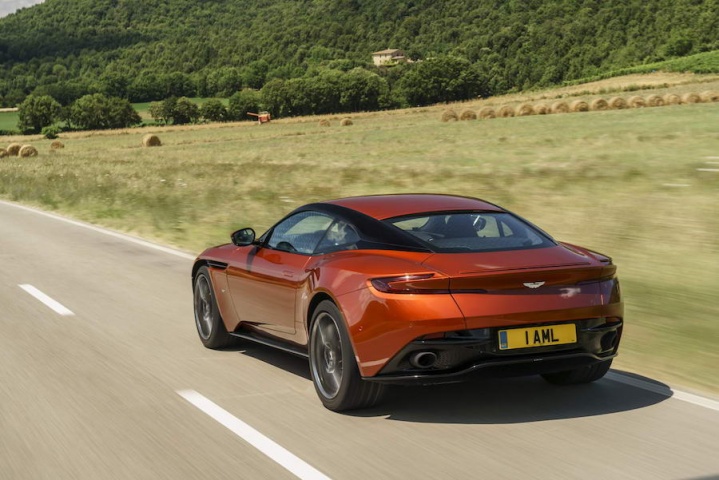 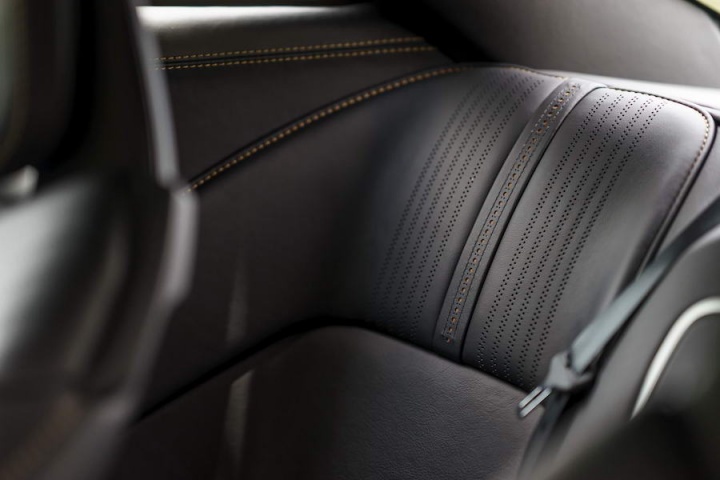 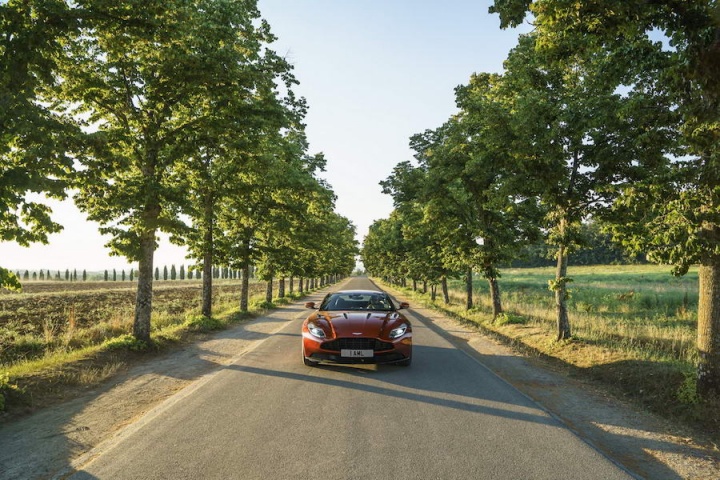 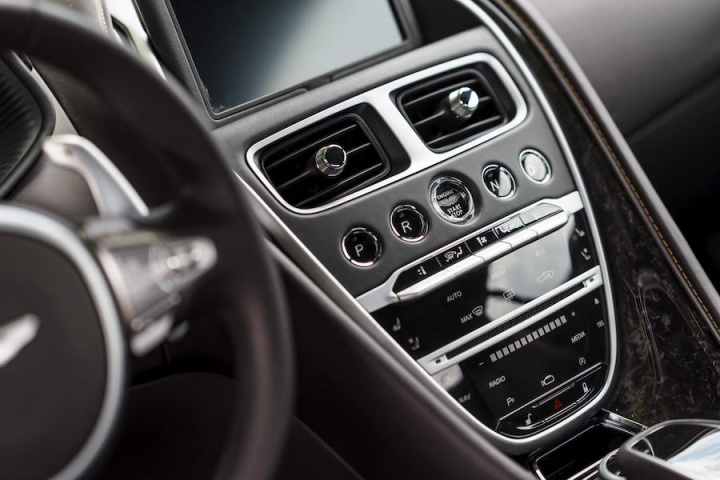 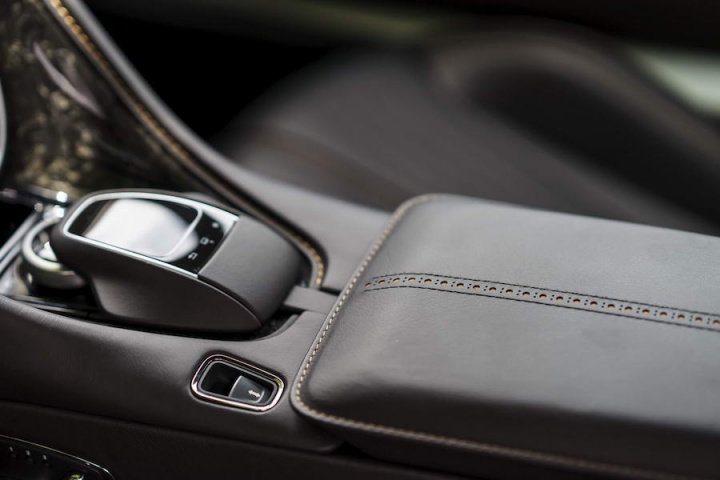 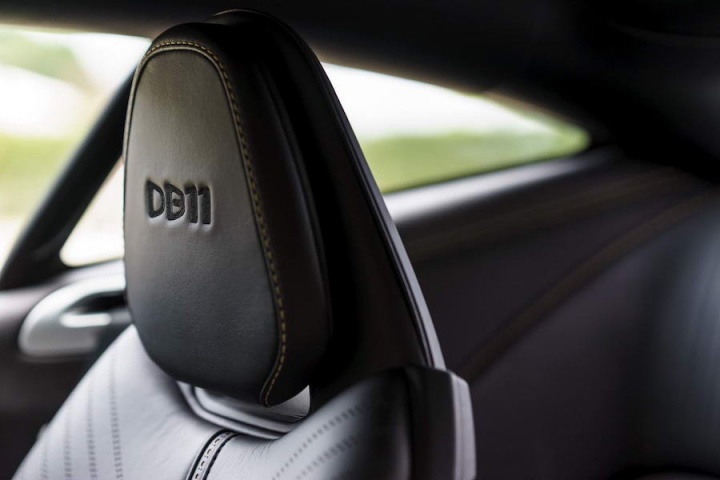 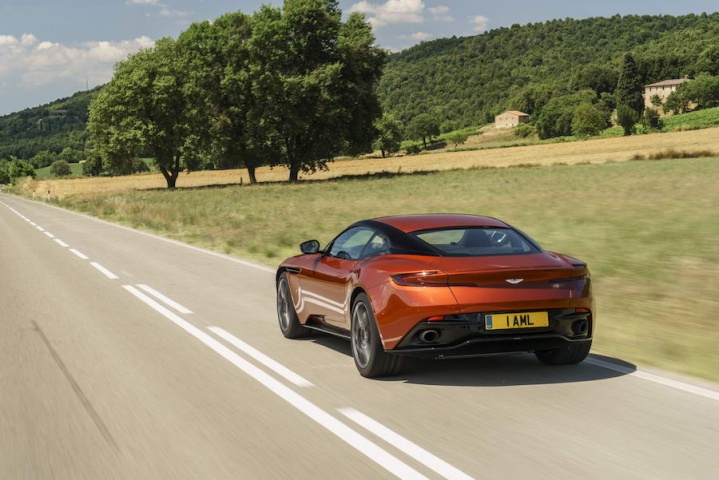 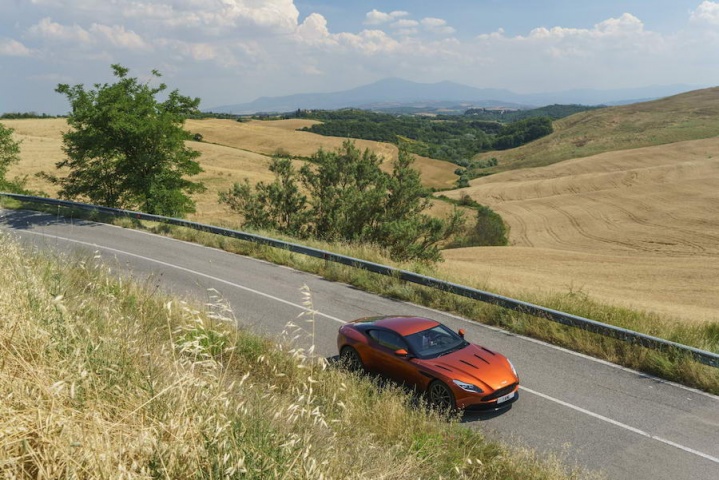 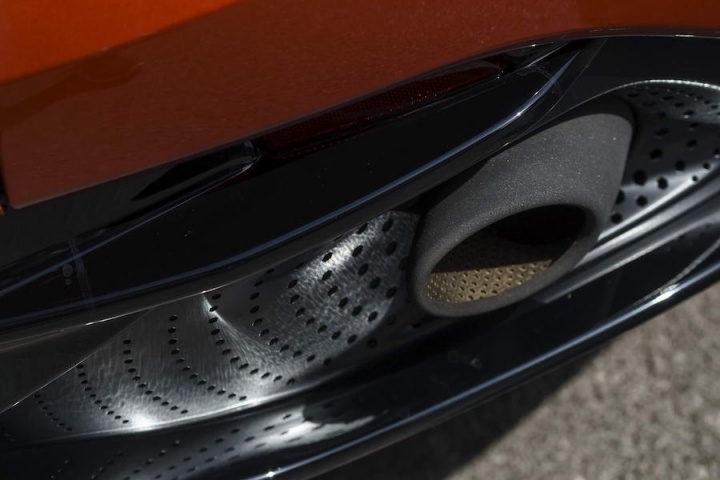 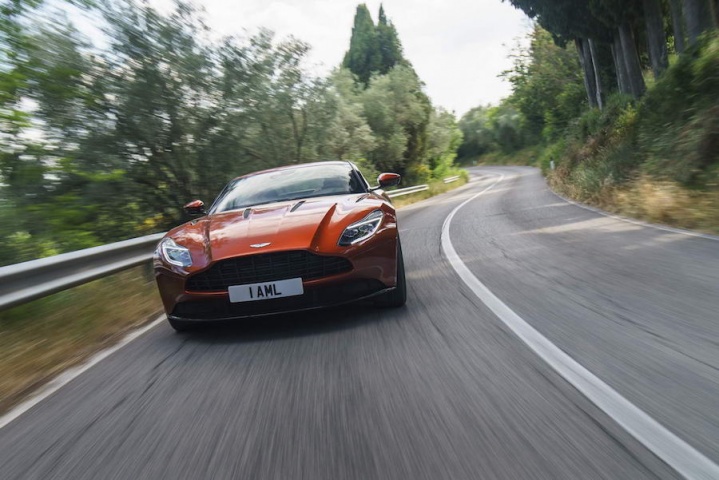 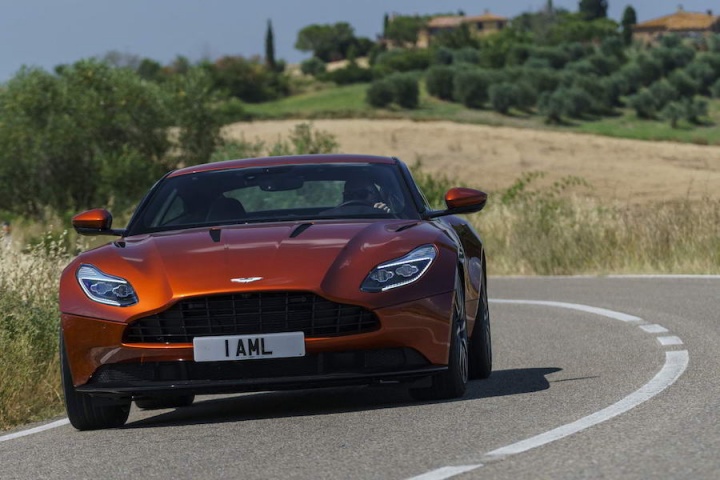 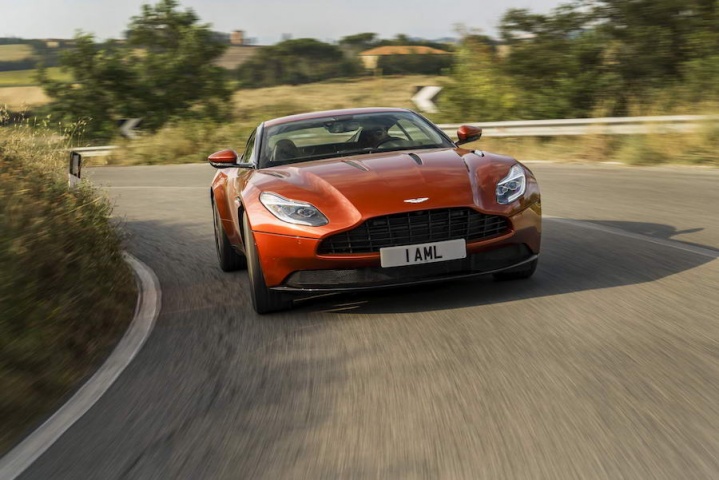 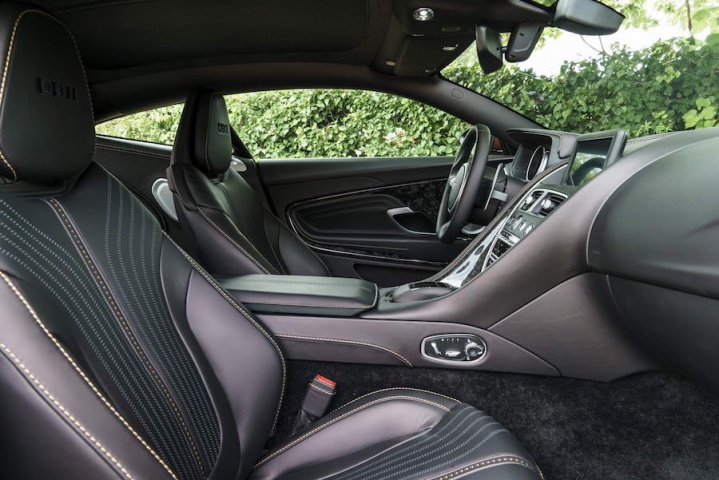 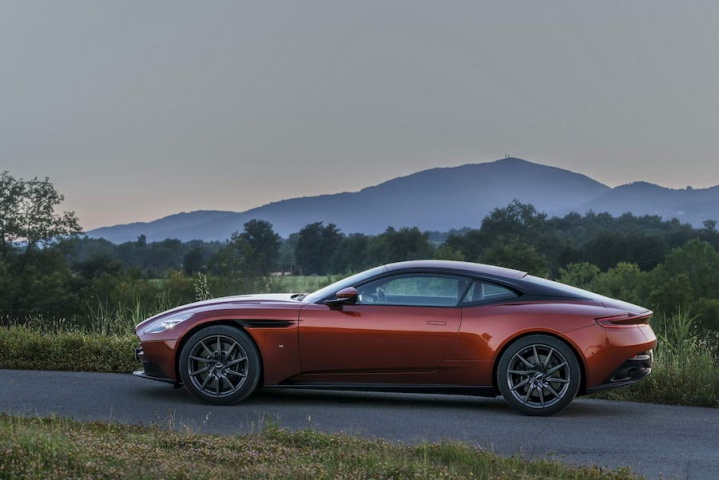 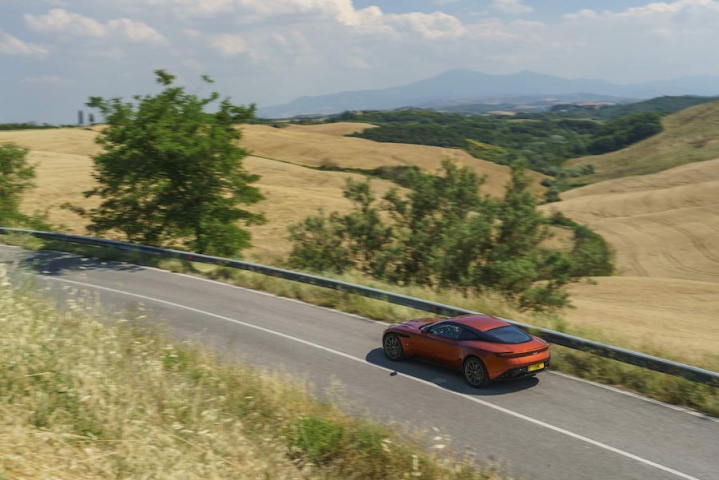 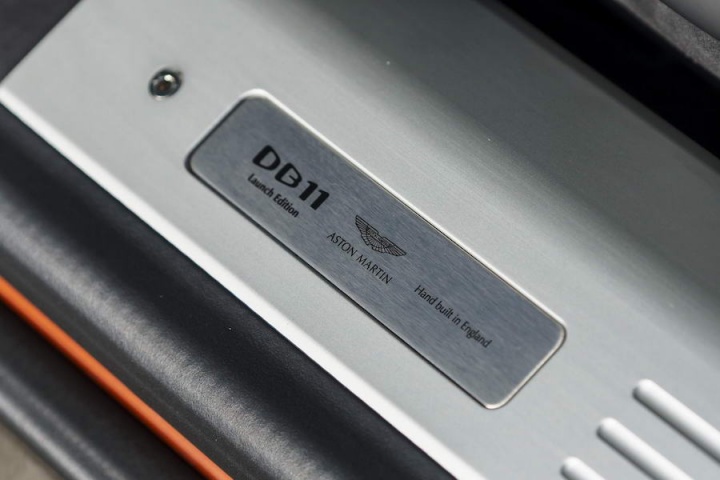 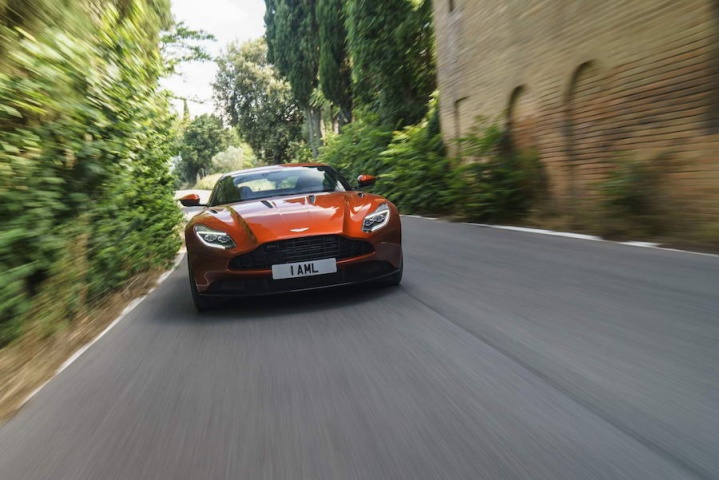 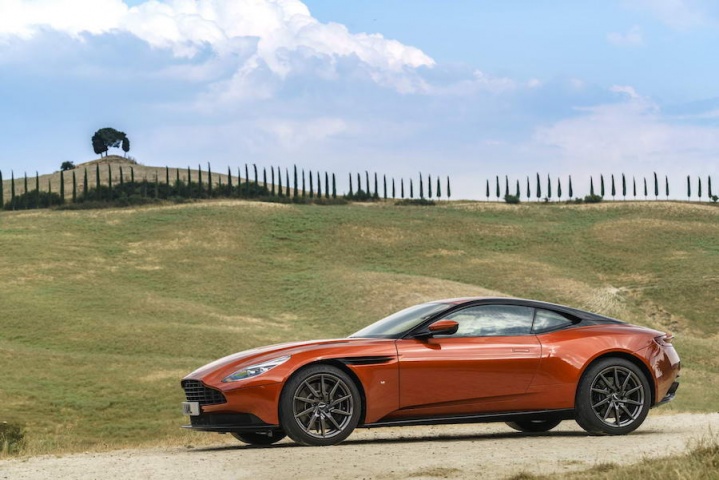 Aston Martin's CEO, Dr Andy Palmer, reckons the company's new DB11 is its most important yet as it sets the template for a whole new generation of Astons. That's a lot of pressure for the DB9 replacement, yet it's a quantum leap ahead of that car in every area. Fancy a beautiful GT car that does a fine impression of a sports coupe when required? The new DB11 is one of the few cars that truly fit the bill.

Aston Martin parked the DB11 alongside its predecessor, the DB9, at the launch and it immediately dates the older model, which now appears bulbous in comparison. The new car is edgy and technical looking while still managing to look like a beautiful Aston Martin. Marek Reichman, Aston's Chief Creative Officer and Design Director, has created an exciting new design direction for Aston. But it's not lead entirely by a desire to make a gorgeous car; the DB11's skin hides some clever aerodynamic trickery, too. Up front are the 'Curlicues' that allow high-pressure air in the wheelarches to exit through the elongated side strakes, reducing lift to aid stability and steering feel. This is balanced at the rear by a fiendishly clever 'virtual spoiler'. Air is channelled from ahead of the C-pillars through a duct within the body work to exit at high speed from a slot on the top of the rear duct, the net result being less lift at the back and apparently no drag. There is a modest 'gurney' that raises up this slot at higher speeds too.

The DB11 looks particularly wide at the rear thanks to sharp haunches and beautifully slim LED lights. Marek told us they're the slimmest in the world, thanks to the repositioning of the reversing and fog lamp to a low down central position (again, the use of LEDs reduces their size). The headlamps, featuring daytime running lights and cornering lights, are all-LED as standard too and they're slickly integrated into a huge aluminium clamshell bonnet. Its shape and profiling is wonderfully complex and it's hinged at the front. Along the side of the DB11, the long doors are sculpted to aid the aerodynamics as well. They retain the graceful slightly upwards opening curve of other Astons and allow easy access to the cabin, though the rear seats are as tiny as ever in a car like this.

Inside is arguably where Aston has made its biggest gains. The crisp TFT screen instruments and Daimler-supplied electronic architecture work very well, but it's the material selection and construction that make it special. Supple leather can be had in a lovely brogue design and metal is used in places others use plastic - including for the large gear change paddles and interior door handles. There's more room all-round than in the DB9 and the sports seats up front are pleasingly supportive and firm, making them comfortable after many hours at the wheel. I'm still not convinced by the look of the 'squared' steering wheel, but it feels good to hold and you don't notice the shape when you're driving.

Let's jump straight in with the engine, as it's quite a big deal to leave behind as charismatic a powerplant as the old 6.0-litre V12 (naturally aspirated) and develop a brand new unit. Although Aston Martin will, we believe, borrow turbocharged V8s from Daimler, it decided it needed its own V12 and the result is this spanking new twin-turbocharged 5.2-litre engine. The peak power and torque figures are strong (and bear in mind that this is the very first iteration of this unit, so expect a lot more to come in the future) and it's theoretically more efficient than its predecessor. Unsurprisingly, the turbos give the new V12 a different personality, as evidenced by the wide plateau of maximum torque from just 1,500rpm, but those numbers can't convey just how special an engine this is. While it's undoubtedly meaty in its delivery in seemingly any gear at any engine speed it retains a lovely long throttle pedal and there's still reason to chase the redline. One of those reasons is the sound this thing makes - top marks to Aston's engineers for managing to give it a distinctive noise throughout the rev range, in spite of the turbocharging, and without any piping in of the sound through the speakers. You'll be a little surprised at just how loud it can be, especially in Sport Plus mode, though there is a 'quiet start' function for when you're leaving the house and you don't want to wake anyone up. I'd never use that. Ever.

Aston gives the DB11 three driving modes - GT, Sport and Sport Plus - each altering the exhaust note, damping, electrically assisted power steering, Active Torque Vectoring via brakes and the transmission. The differences are quite pronounced, though as the DB11 is billed as a GT car, we'd have liked for the GT setting to be a little softer in terms of damping. That's one of our few criticisms, however, and at speed on the motorway it's perfectly comfortable - it's just broken surfaces at low speeds that upset its composure. As the car is so engaging to drive you'll soon find yourself reaching for the more focused modes to fully unleash it and if you do that you'll find it difficult not to think of the DB11 as a sports car. The steering is quicker than the DB9's and it shows in how quickly the car darts for the apex when you ask it to. What's more, the front end is incredibly faithful to input. Even in damp conditions the bespoke Bridgestone S007 tyres find grip and it's the rear end that eventually relinquishes hold on the tarmac if you push through the initial neutrality. The chassis telegraphs the transition well and the standard mechanical limited slip differential helps you maintain indecent pace on the exit of a corner. It also assists with rock-solid stability under heavy braking into a bend. In the dry, there's no fear in choosing the Track mode of the stability control as there's so much grip to be had and it's all easy to control, even at the limit. In its default setting, the DSC quickly, smoothly intervenes when needs be.

In spite of the width of the DB11, it's perfectly at home on twisty back roads and it makes light work of quick direction changes. You need to keep an eye on bad bumps as they can momentarily upset the car's composure mid-bend, but that's only really if you're pushing on and the damping is in a firm setting. At everyday speeds it's sublime, with great brakes and a slick eight-speed automatic gearbox that lets you take full control with tactile gearchange paddles if you so wish. There are other GT cars out there that do the whole cruising in civility thing a little better, but none that are as exciting to drive quickly or as special feeling regardless of how fast you want to go. This is a car for those that relish driving.

We suspect that those with the means to buy something like the DB11 will quickly skip over this bit, as you have to be pretty minted to even think about it. Our estimated cost of €334,000 landed in Ireland is based on a UK price of about £155,000 and the Band G VRT taxation. Somewhat surprisingly, the Aston has few direct price or layout rivals. Many buyers will employ the personalisation services of 'Q by Aston Martin' to make their DB11 their own, though the 'Launch Edition' is crammed with goodies as standard. Here's some of the specification: Strathmore leather upholstery with Alcantara headlining (lush); heated and electrically adjusted front seats (very comfortable after long hours at the wheel); a powered armrest lid for storage (unnecessary, but kinda neat all the same); Touchpad Control for the infotainment system (same as Mercedes uses and works beautifully); electrically folding and heated door mirrors; a 360-degree parking camera system with front and rear parking sensors; cruise control; dual-zone climate control; a full suite of infotainment functions, including Bluetooth, Wi-Fi and a 1,000-watt Bang & Olufsen BeoSound system.

Bentley Continental GT: in pricing and performance the DB11 sits between the V8 S and W12-engined Speed versions, but it's more engaging than either - if not so useful all year round.

Ferrari California T: remarkably similar performance and price stats, plus they share the front engine, rear-drive layout, but the Ferrari is a coupe-cabriolet.

Mercedes-AMG S 63: perhaps not as effortlessly cool a badge or image, but an astonishingly good car for a little less money - choose from Coupe and Cabriolet versions.

Aston Martin has nailed the DB11's brief, giving it a uniquely sporting and engaging personality amongst its peers, yet the ability to cruise for many hours and be used day-to-day by the lucky few. Sure, we think it could have done with being a little softer again in its default driving mode, but it's so good to drive that we'll forgive it that. Its gorgeous exterior and interior appeal to all, while the geeks in us adore all the technical detail gone into its development. And last, but certainly not least, the new turbocharged V12 engine is a belter. If this is what we can expect from new Astons in the pipeline, we're in for a real treat.