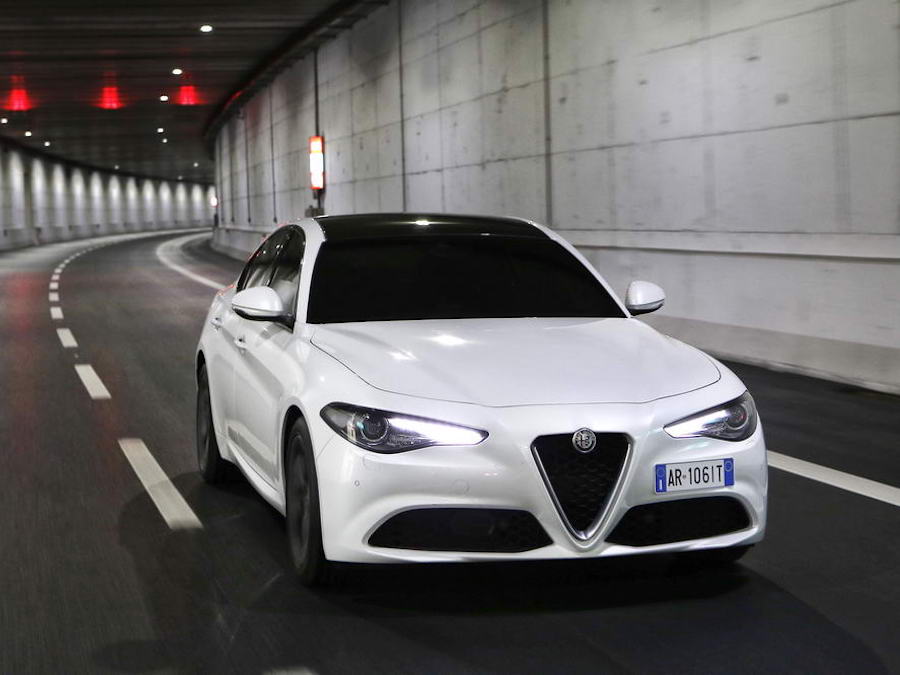 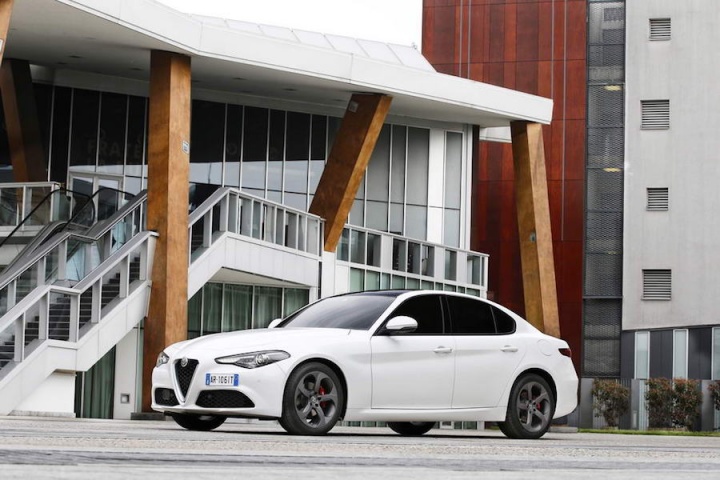 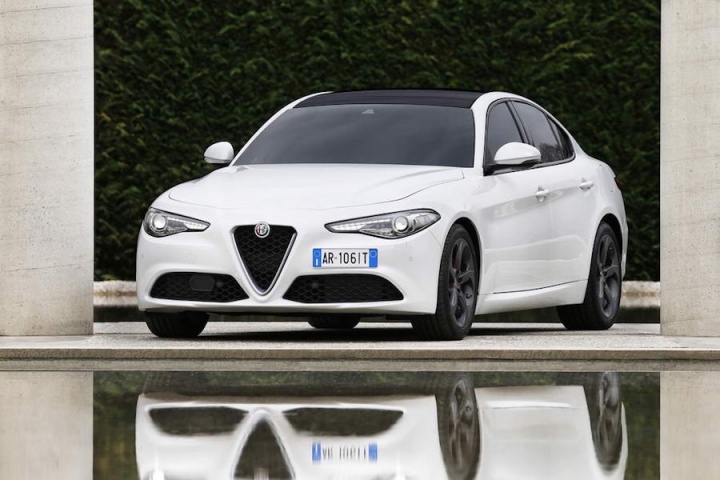 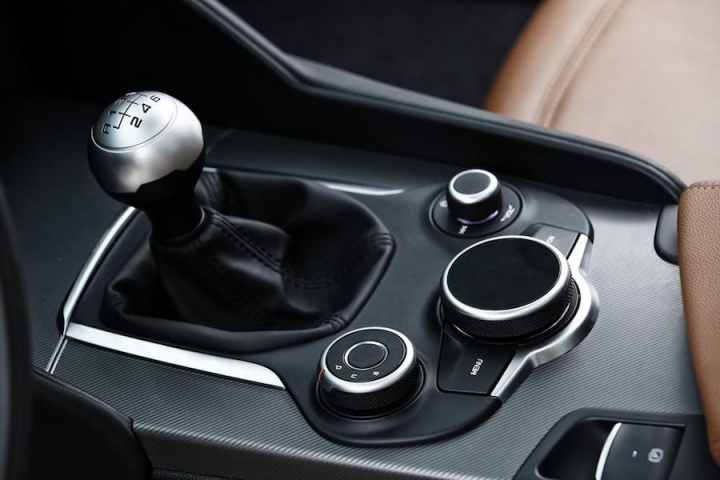 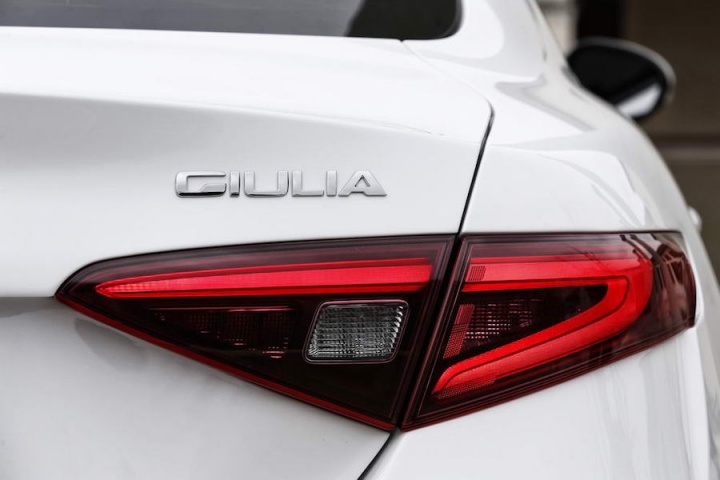 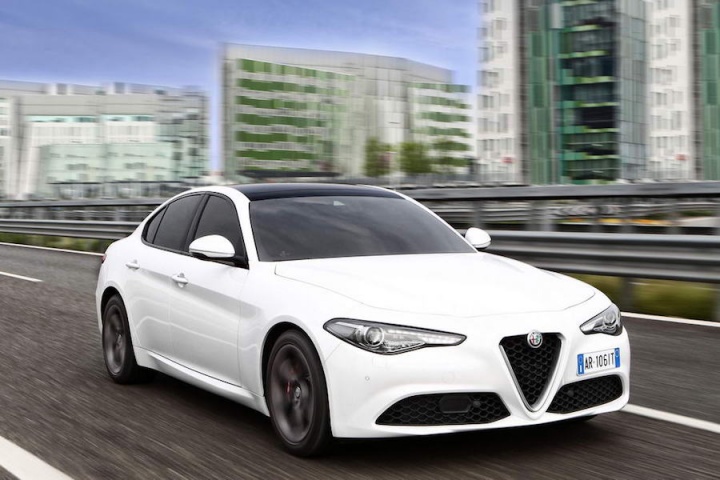 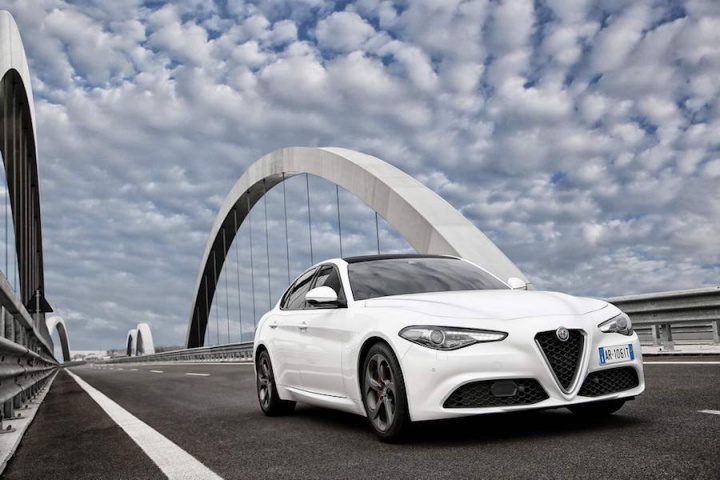 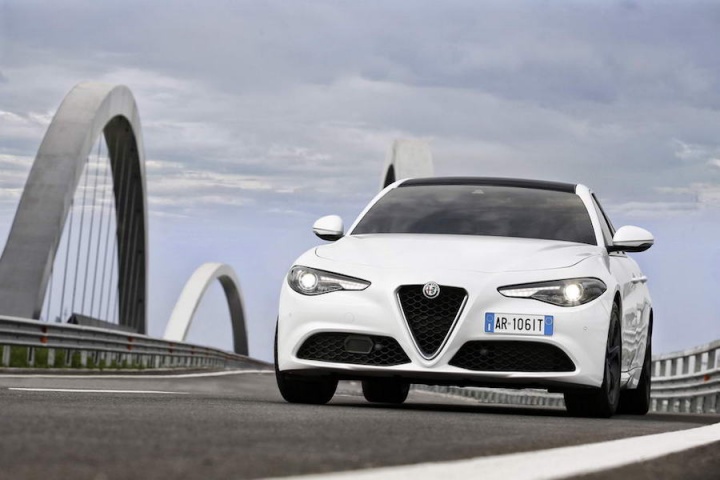 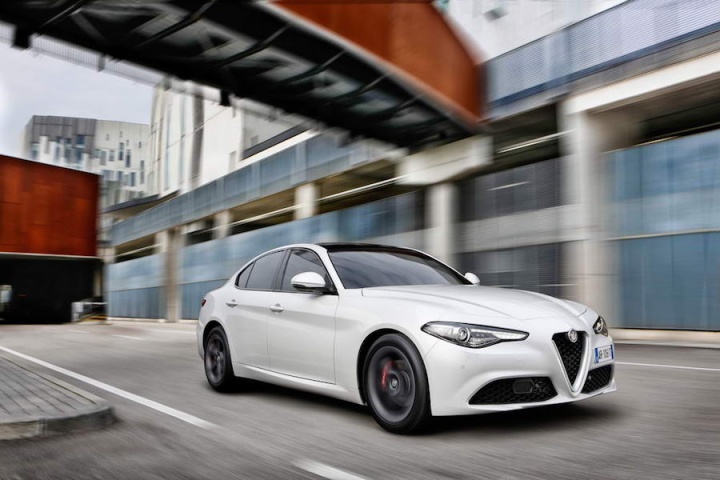 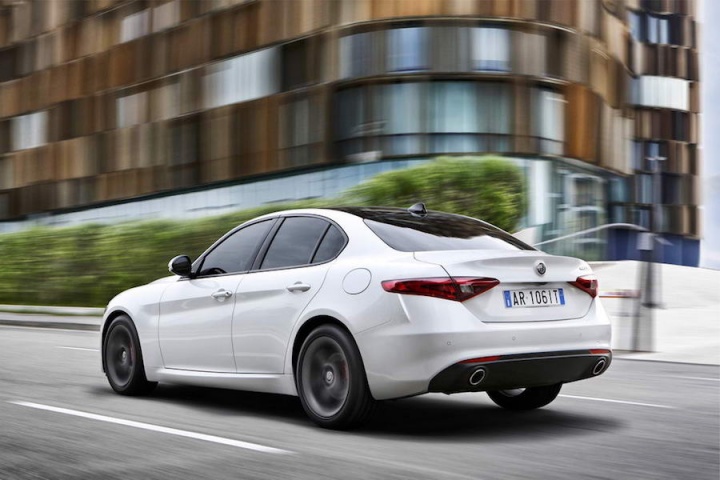 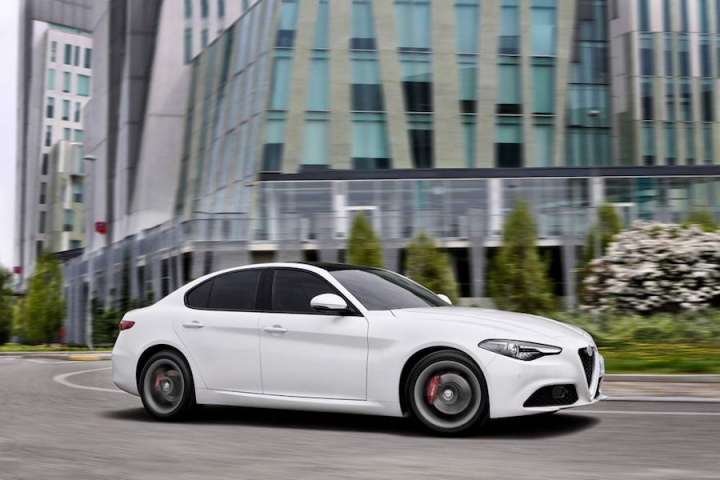 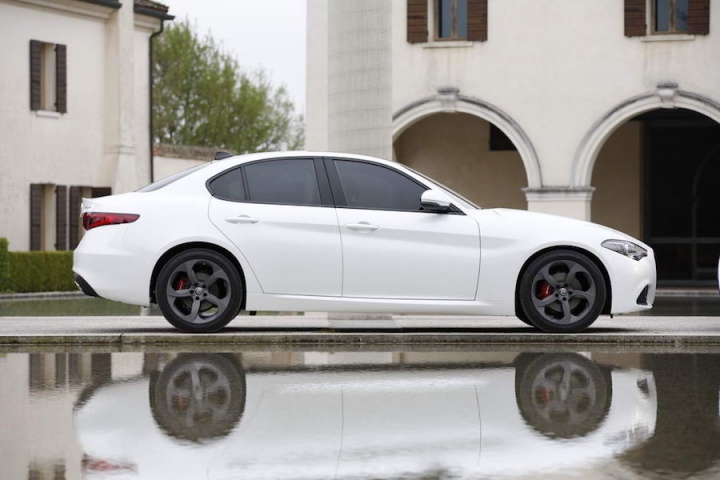 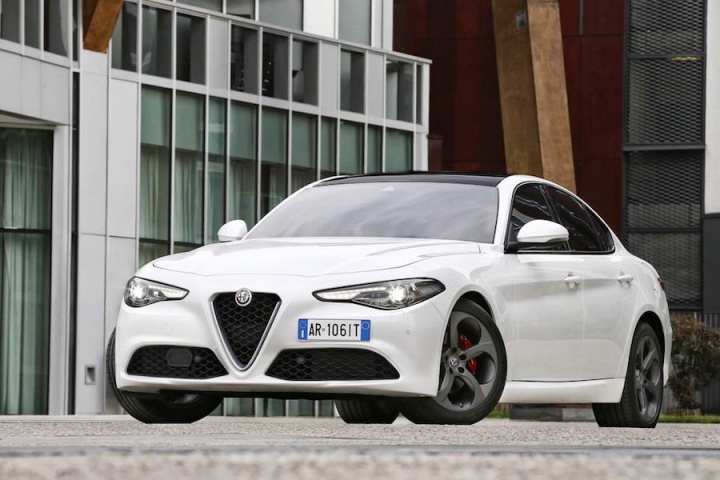 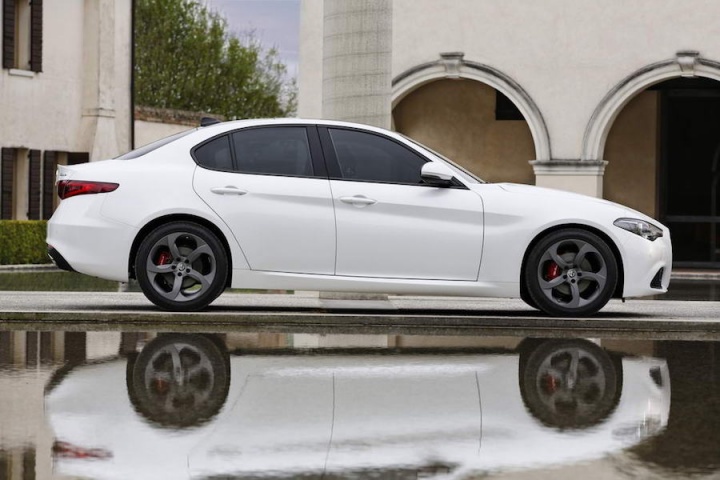 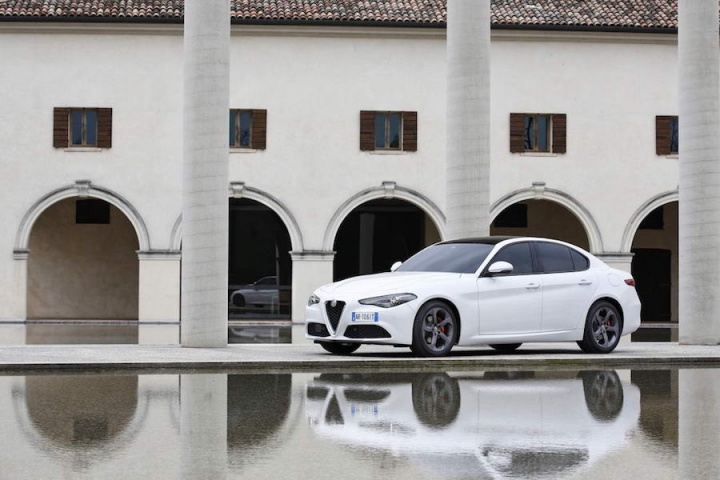 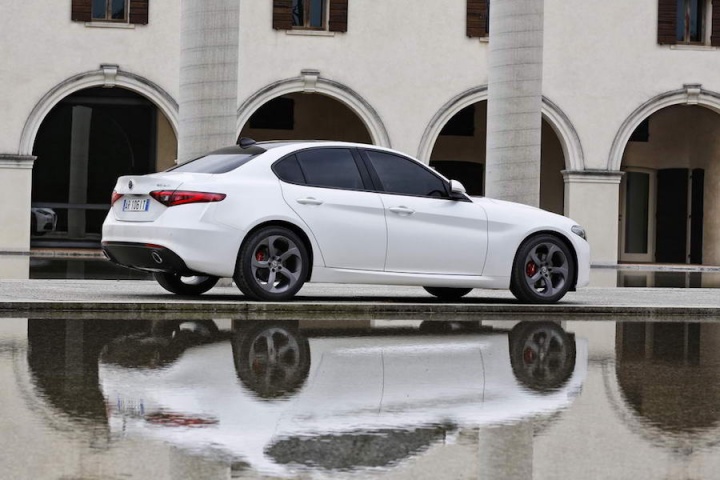 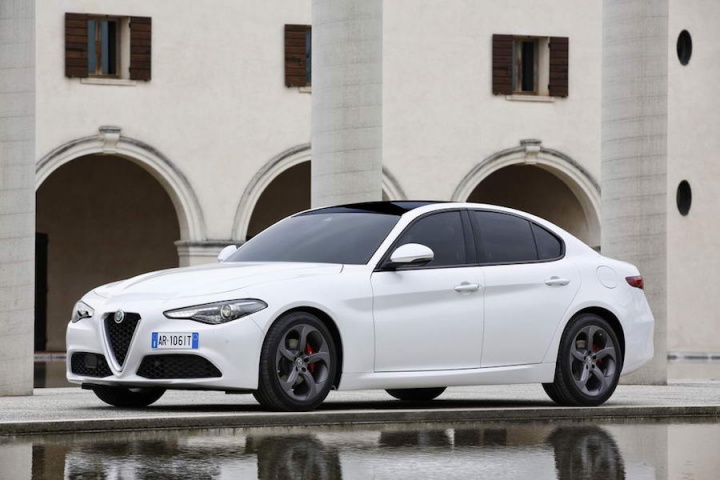 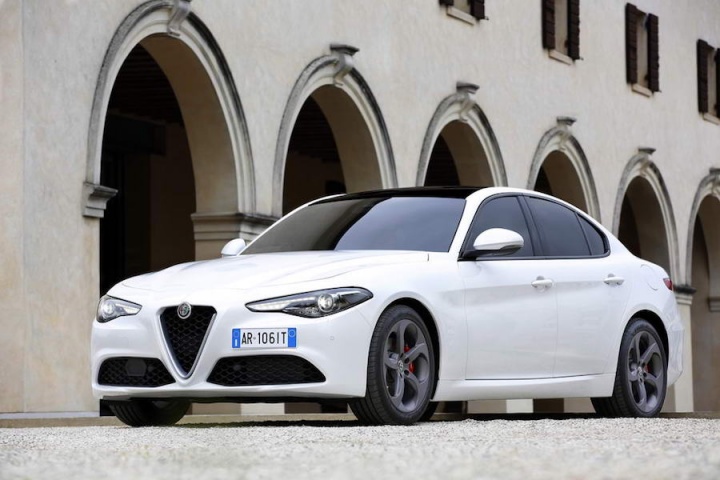 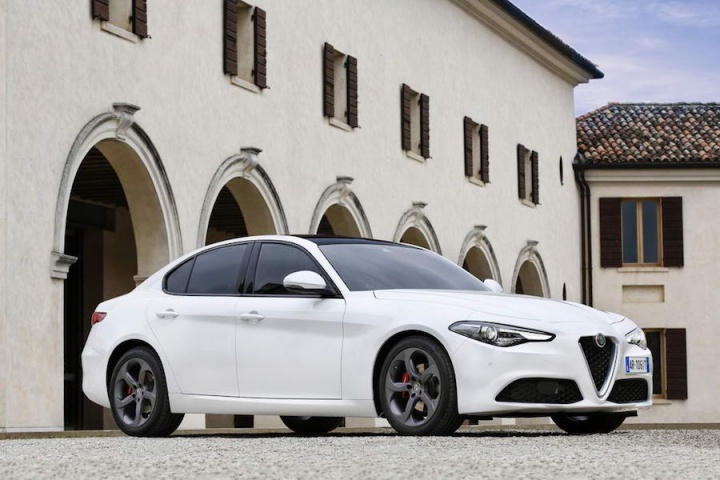 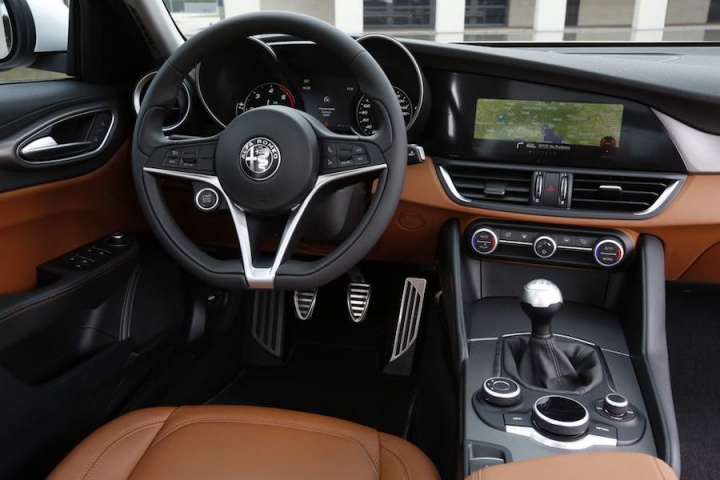 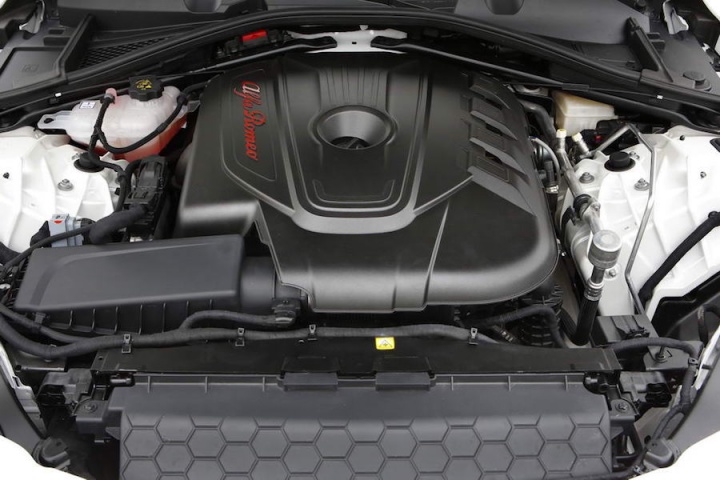 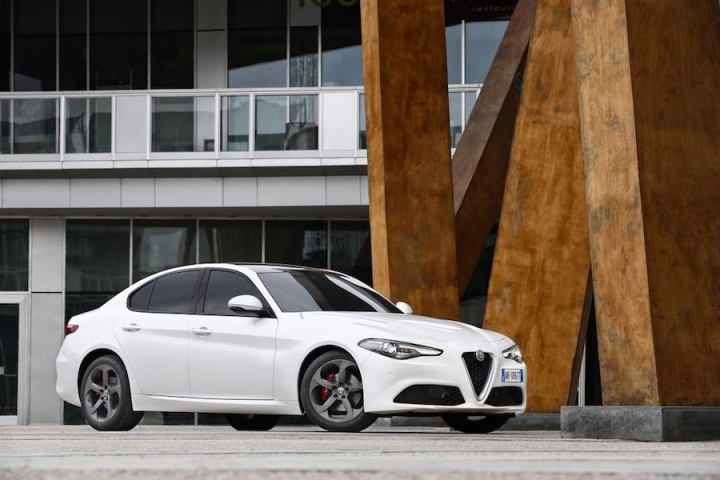 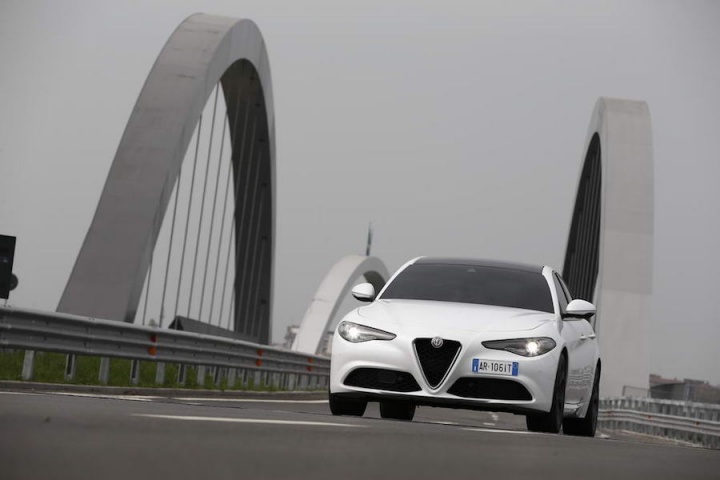 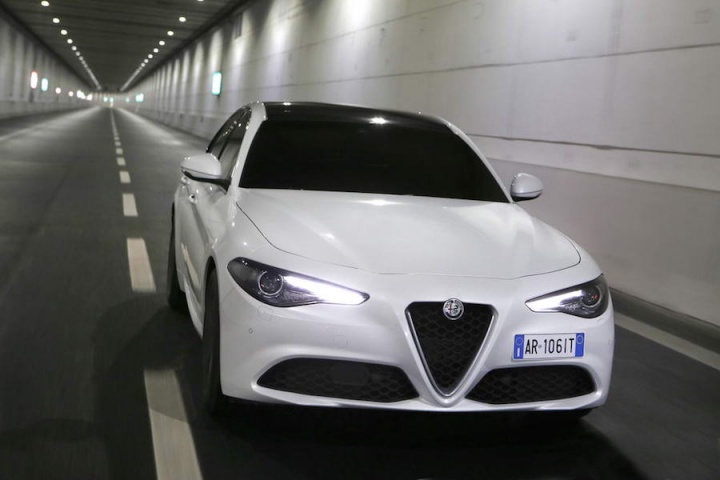 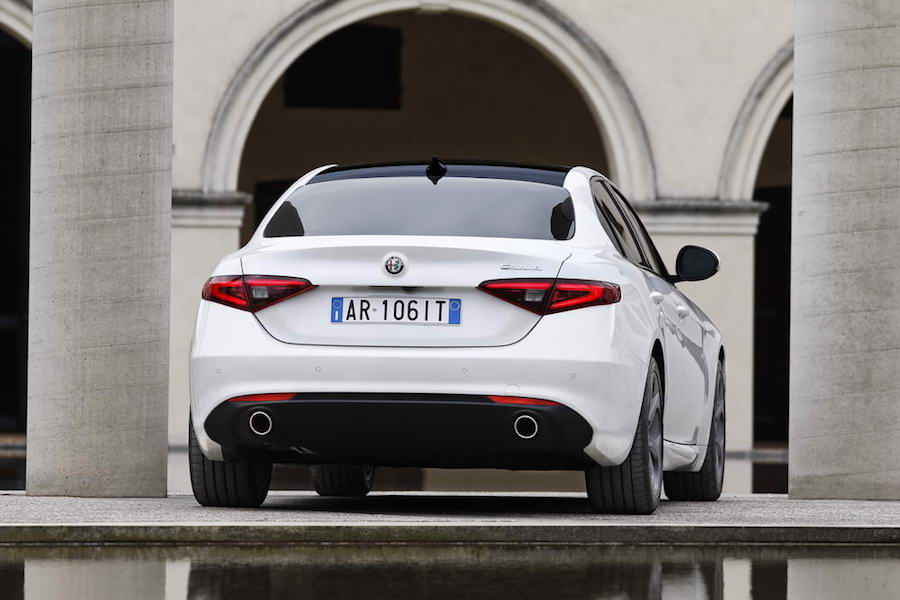 Important? Not half. The Giulia saloon is 'make or break time' for Alfa Romeo.

Expectation can be a terrible thing. We've been expecting Alfa Romeo to emerge from the doldrums for, ooh, about 37 years, but each and every time a brave new world is promised by this legendary Italian brand, the product tested always turns out to be a dispiriting dystopia instead. Can the new Giulia saloon, which Alfa's boss Harald J Wester candidly admits represents 'make or break time' for the company, finally end this depressing trend?

The Alfa Giulia loses half a star here because of the interior, which we'll come onto in a moment. However, externally, we have no qualms with it whatsoever. Say what you like about the sturdy handsomeness of the main three Germanic rivals: the fact of the matter is that none of them look as good as the Alfa, and nor does Jaguar's XE, either. That didn't stop the old Alfa 156 and 159 models being obliterated by the Germans' sales figures, naturally, but if you're trying to entice a sceptical, even cynical public back into showrooms, such glorious design is hardly going to hurt. Well-proportioned, attractive in any colour or specification, fine to behold on its smallest alloys, featuring that fabulous face that will hopefully become Alfa's new corporate appearance... this thing is a gem. It is every bit as good in the metal as it is in photos and it looks like a proper, modern Alfa Romeo too, not some half-baked historical copy by a marque desperately grasping for the past.

Stepping inside is a bit of an anti-climax, because it doesn't quite match up to class standards in terms of finishing. Again, though, it's about the eye candy and if you're just looking at it the Giulia's cabin has a charm all of its own. The leather/cloth seats are fantastic, both comfortable and stylish, while the steering wheel is just the right size, bears the engine 'start/stop' button in the tradition of modern supercars and is flanked by a sensational pair of column-mounted metal paddle shifts for the automatic transmission. Alfa has put some thought into sculpting the flowing glass screen that frames the instrument cluster and which houses the infotainment display, while the seating position is bang on the money, there's loads of room in the rear with a tall driver and passenger up front and the boot is as big as anything you'd find in four-door competitors from Audi, BMW and Mercedes-Benz. What lets it down are one or two materials that are nothing like as pleasant to the touch as, say, the switchgear and surfaces in an Audi A4, and that infotainment screen is small and behind the times in terms of its graphical displays. Nice, intuitive control system for it, though, so although it's not a touchscreen, it's fairly simple to use. Net opinion on the interior? It's good, but not sublime.

We've already talked about the predecessors to the Giulia, which were the 159 - last seen in 2011 - and the stunningly pretty 156. What's different this time around is that the Giulia, based on a brand new, multimillion-euro platform that will underpin eight models coming from Alfa in the next few years, is rear-wheel drive, rather than nose-led. Furthermore, the Italian firm has taken some care in both keeping the weight of the car down and then distributing it evenly over the axles. The Giulia's 1,374kg (dry) bulk is split 50:50 front-to-back and that's thanks to the extensive use of aluminium and bits of carbon fibre in its construction. Keeping things light should hopefully allow the Alfa, even in diesel form, to make the most of its rear-drive architecture.

At launch, there will be four (well, three, really...) engines to choose from and they're all completely fresh designs with more aluminium employed in their construction. There's a 2.0-litre petrol, a 3.0-litre biturbo V6 petrol (this 510hp brute is in the Quadrifoglio and will soon be found in the back of an 'affordable' Ferrari sports car) and one solitary diesel, a 2.2-litre four-cylinder, split into two power grades. A 150hp/380Nm variant will provide the entry point, and this 180hp/450Nm engine, which Alfa quotes the same economy and emissions for at 67.3mpg and 109g/km respectively. Complications with the right-hand drive format mean that, for now, all Giulias (the hot Quadrifoglio included) that are heading our way come with an eight-speed ZF automatic transmission. A six-speed manual is available in left-hand variants, again including the Quadrifoglio.

None of this on-paper promise would matter, of course, if it drove like a pudding. So here comes the zinger: Alfa has engineered a cracker here. This is genuinely a great chassis and an all-round highly competitive car. Its best feature is its ride and refinement, as the Giulia doesn't have fancy multi-mode dampers to cope with surface imperfections; instead, Alfa has given it relatively soft springs and good shock absorbers to ensure that it can soak up all manner of crumbling tarmac with little difficulty. Factor in impressive levels of sound suppression and a cruising Giulia feels like a thoroughly premium product.

The 2.2-litre diesel engine deserves praise too, coming in at the 180hp mark that is about standard in this class at the moment, but having the best torque figure of 450Nm, which outpunches the BMW 320d (190hp/400Nm), Audi A4 2.0 TDI (also 190hp/400Nm), Mercedes' new 2.0-litre engine of 195hp/400Nm (only in the E-Class, not the C, at the moment) and the Jaguar XE 2.0d with the more powerful Ingenium diesel (180hp/430Nm). The closer-spaced ratios of the eight-speed auto make the Giulia 2.2 quicker to 100km/h than the manual equivalent, at 7.1- vs. 7.4 seconds, and it feels lively. Even at 160km/h on a test track and holding a high gear, the Alfa still provides acceleration that is tangible through the small of your back. It does become a little noisy beyond 3,500rpm, with peak power just 250 revs above this, but so do all the competitor units - revving a relatively small-capacity turbodiesel is futile anyway - and the Alfa's engine, while loud under duress, at least sounds a bit throaty and interesting near the redline.

The knockout punch for Alfa revival disbelievers comes in the corners. Wow, has the company got this right. No diesel saloon is ever sparkling to drive, but the Giulia 2.2 gets very close, thanks to a lovely, dependable balance that sees it trying to gently slip the rear when exiting slow hairpins, resisting understeer when turning into high-speed sweepers and just generally proving composed and biddable if the driver decides to start chucking the car about. The power steering, which is electronic and new, has the fastest ratio in class at 11.8:1 and while it might not suit all driving styles, to us it felt sharp and precise, if a little lacking in weight and feel - yet it's good enough to ensure placing the car accurately is a breeze. Giulia buyers are provided with excellent brakes and exceptionally good body control to ensure that it adheres to the ideal of a true Alfa; a bit sportier than your average stodgy executive saloon, without sacrificing its premium nature in the process. Wonderful.

This is difficult at the moment, because the Giulia, while on sale in other areas of Europe, isn't due in right-hand drive markets until Q3 of this year. All Alfa's representatives would tell us is that the car would be priced to match the BMW 3 Series - which means around €43,890 for the 150hp MultiJet - and that the trim lines would echo those of the rest of Europe, with basic Giulia, middling Super and full-on Quadrifoglio specifications.

Whether we'll also get the optional Sport and Lusso packs (so, for example, you could have a Giulia Super Lusso) remains to be seen, but as a rough yardstick, expect various driver assistance aids (Forward Collision Warning, Autonomous Emergency Brake, Integrated Brake System and Lane Departure Warning), cruise control, 16-inch alloys, dual-zone climate, Alfa's DNA drive select system and a 6.5-inch display screen infotainment system to be equipped across the range, while stepping up to Super will add fabric and leather upholstery, 17-inch wheels and more. The Quadrifoglio, as a Ferrari-engined supersaloon, gets its own sporty and comprehensive equipment list.

We're going to try and keep our emotions in check, and rate the Alfa as four stars... for now. The reasons for this reticence are as follows: it needs to drive as well in Ireland as it did in Italy; we need to know exact specs and prices for our market, to see how they compare to the established rivals; and - terrible of us to say it, we know - we'd like to see if the build quality and reliability issues that have dogged Alfa for decades are finally resolved. All of these, the last in particular, will take time to properly and fairly assess, but if the Giulia passes these three tests it will confirm what we already suspect: the agonising aeons that have passed since Alfa last built a competent and half-decent machine, the constant and seemingly unending disappointment for fans of the marque... they're over. Alfa Romeo is, praise be, back. Back with the brilliant, beautiful and bold Giulia. This is a truly excellent executive saloon with a sporting bias that should attract vital new customers while also pleasing the hardcore Alfisti - presumably precisely what Alfa was aiming for. Game on, Germany. 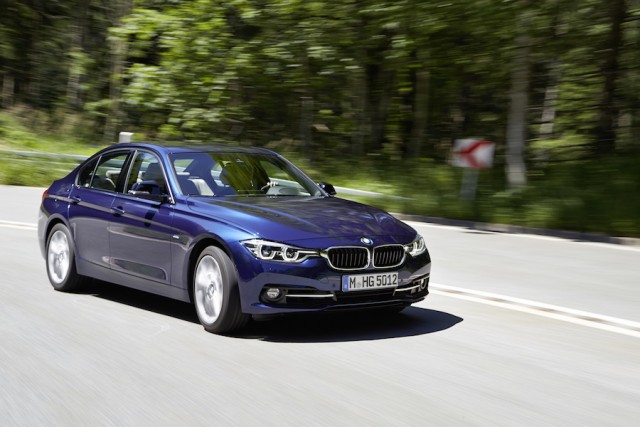 BMW 3 Series review
BMW 3 Series vs. Alfa Romeo Giulia: we've picked the obvious Teutonic rival, but the BMW's all-round brilliance is replicated by the Audi A4 and Mercedes-Benz C-Class - and it's this trinity that the Alfa has to beat. 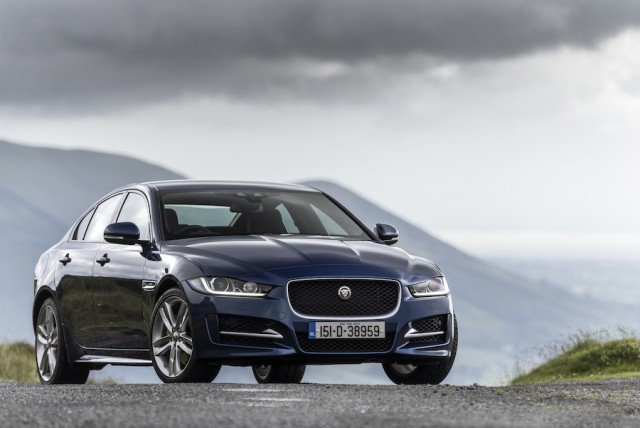 Jaguar XE 2.0d R-Sport review
Jaguar XE vs. Alfa Romeo Giulia: of the brands tilting at the German Establishment, Jaguar currently leads the pack, as its XE looks great, has fine engines and a star chassis. It's a bit cramped in the back, though.

Volkswagen Passat review
Volkswagen Passat vs. Alfa Romeo Giulia: technically from the class below, you could have a well-specified one of these instead of the Alfa. Crushingly competent, but a little dull in comparison to the Alfa.