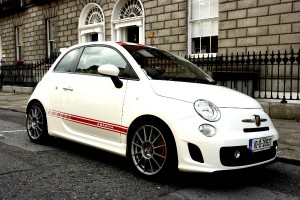 The Abarth 500 Esseesse is a hoot. Is this the best new hot hatch on the market?

Since 2002 MINI, has had its own way when it comes to the cute retro hatchback, but Fiat returned to the fray with the 500 this type of car has become even more affordable and now Fiat is back to take on another MINI, the mighty Cooper S with a rip-roaring potent version of the 500 - the Abarth.

The Abarth brand was reborn in 2008 with the Punto Abarth. The 500 features a 1.4-litre turbocharged petrol engine producing 133hp, but we aren't just driving the 500 Abarth, we are driving the esseesse version, which, thanks to a new air filter and ECU, boasts peak power of 157hp.

The standard Fiat 500 can best be described as cute, so when Fiat decided to make a performance version the result is that it looks like a cartoon villain. It is a caricature of a grown up hot hatch. There have been dramatic changes to the front end to swallow up that bigger engine and its turbocharger and the air inlets on the front bumper give better cooling to the brakes. The esseesse version also has different springs and dampers, 17-inch alloy wheels and cross-drilled brake discs.

Some of the details inside the car are really first class - from the Abarth badges to the alloy racing pedals. Other touches include a turbo boost gauge and a 'TTC' button, which stands for Torque Transfer Control - essentially an electronic limited slip differential.

This car is enormous fun. It darts and bolts its way through life like a rabid Jack Russell and it is simply brilliant as a result. This esseesse version is good but the changes to the suspension do make it perhaps a little too hard-edged for any city driving where speed bumps or potholes become catastrophic events. However, the grunt and growl from this car is worth the extra money as well as the look on other drivers' faces as they are chewed up and spit out by this pocket rocket.

This isn't a car that should be bought by anyone just wanting the look of the Abarth. The standard variant would do that job perfectly well. Rather, this is the full fat hardcore version and will only really be appreciated by those who are expecting just that. Priced at €23,500, it looks like something of a bargain. I really liked it. Handing the keys back is going to be pretty painful.