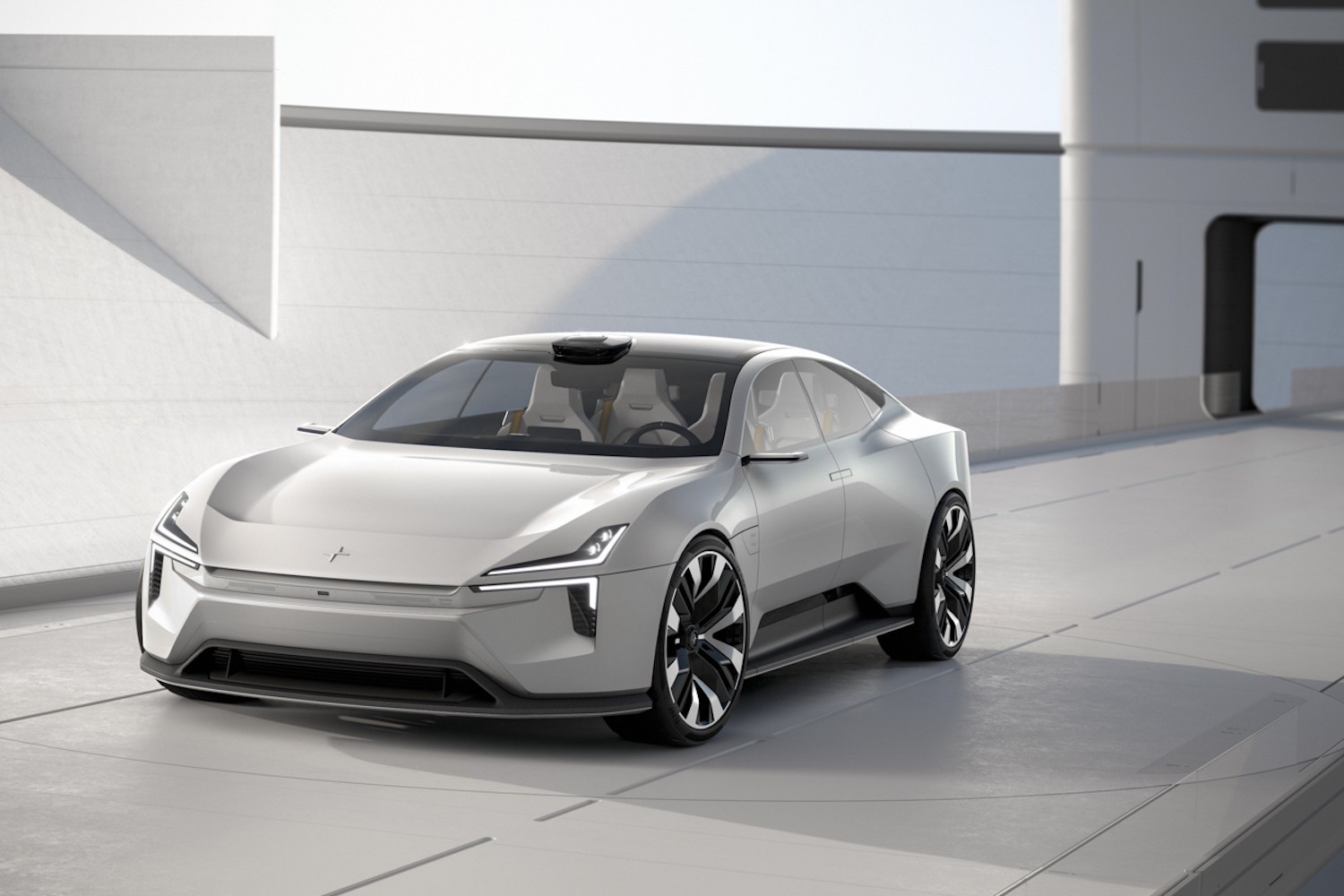 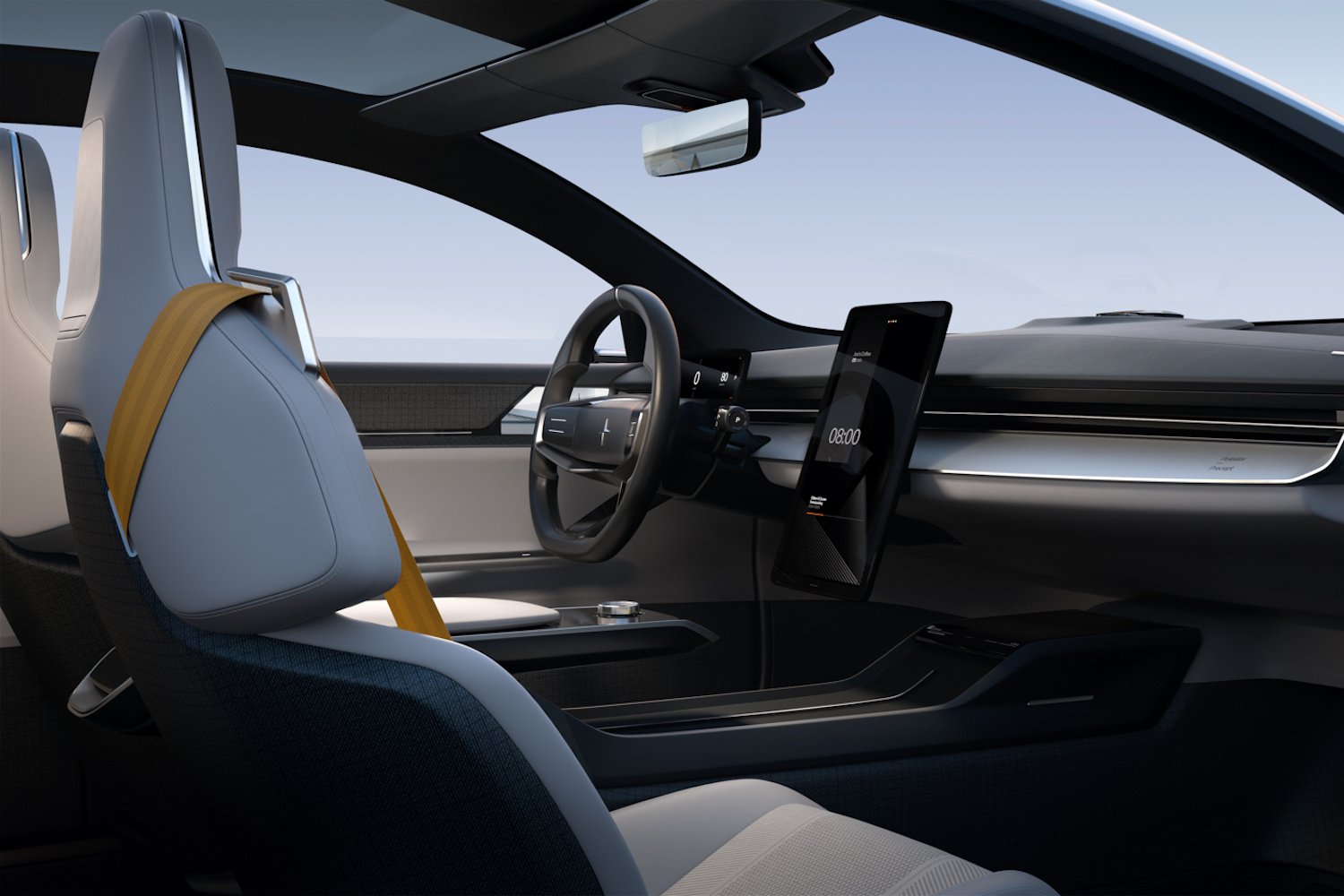 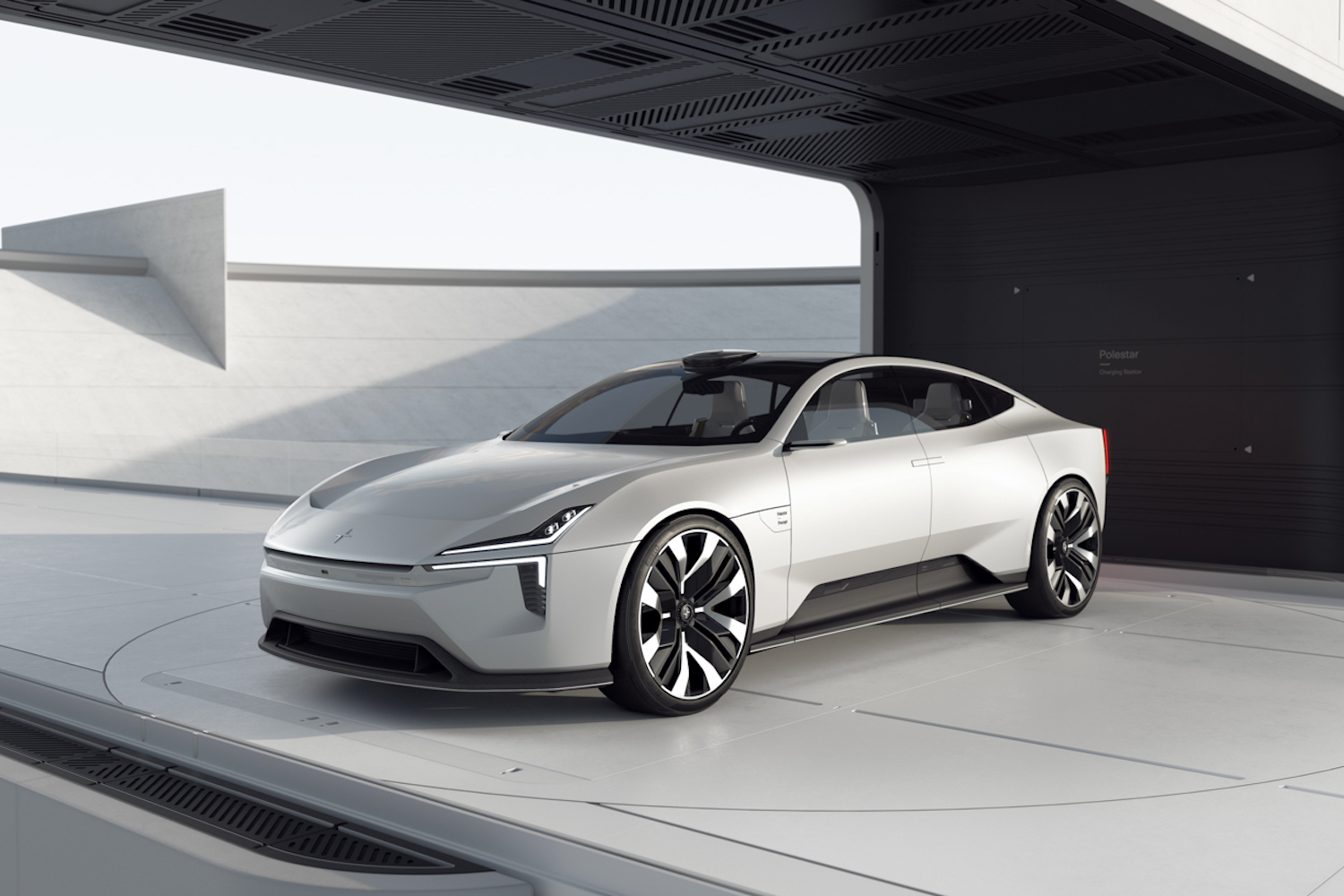 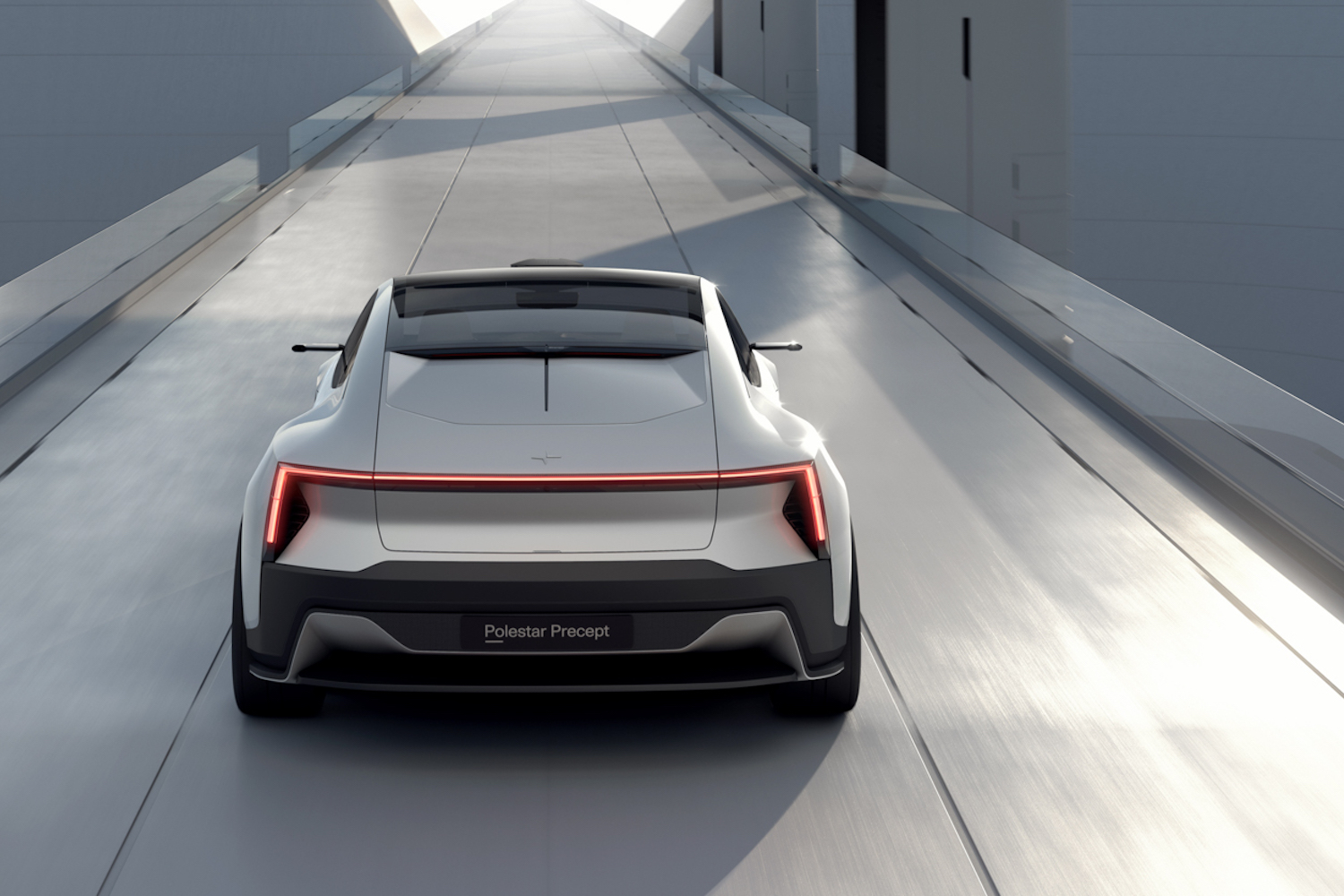 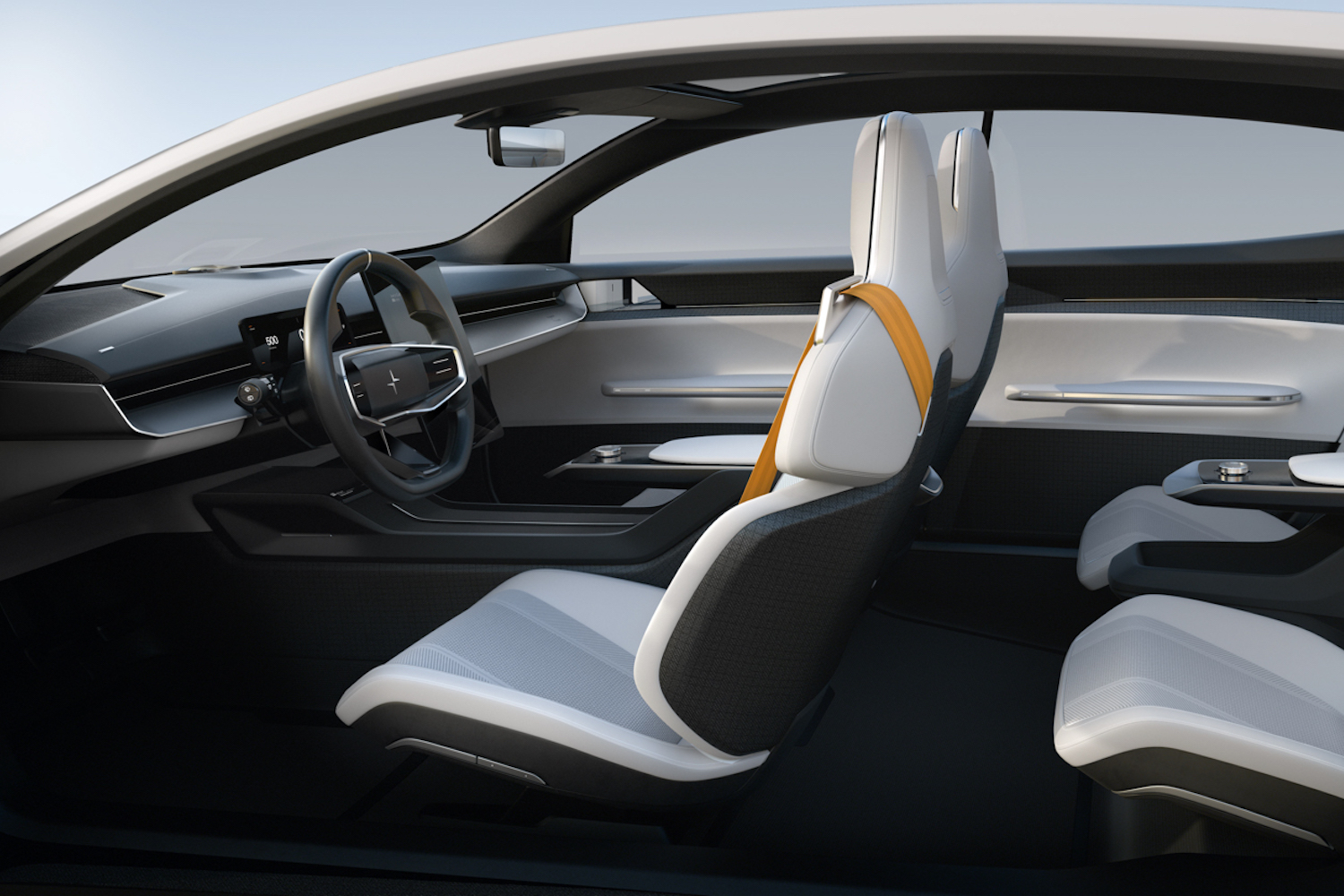 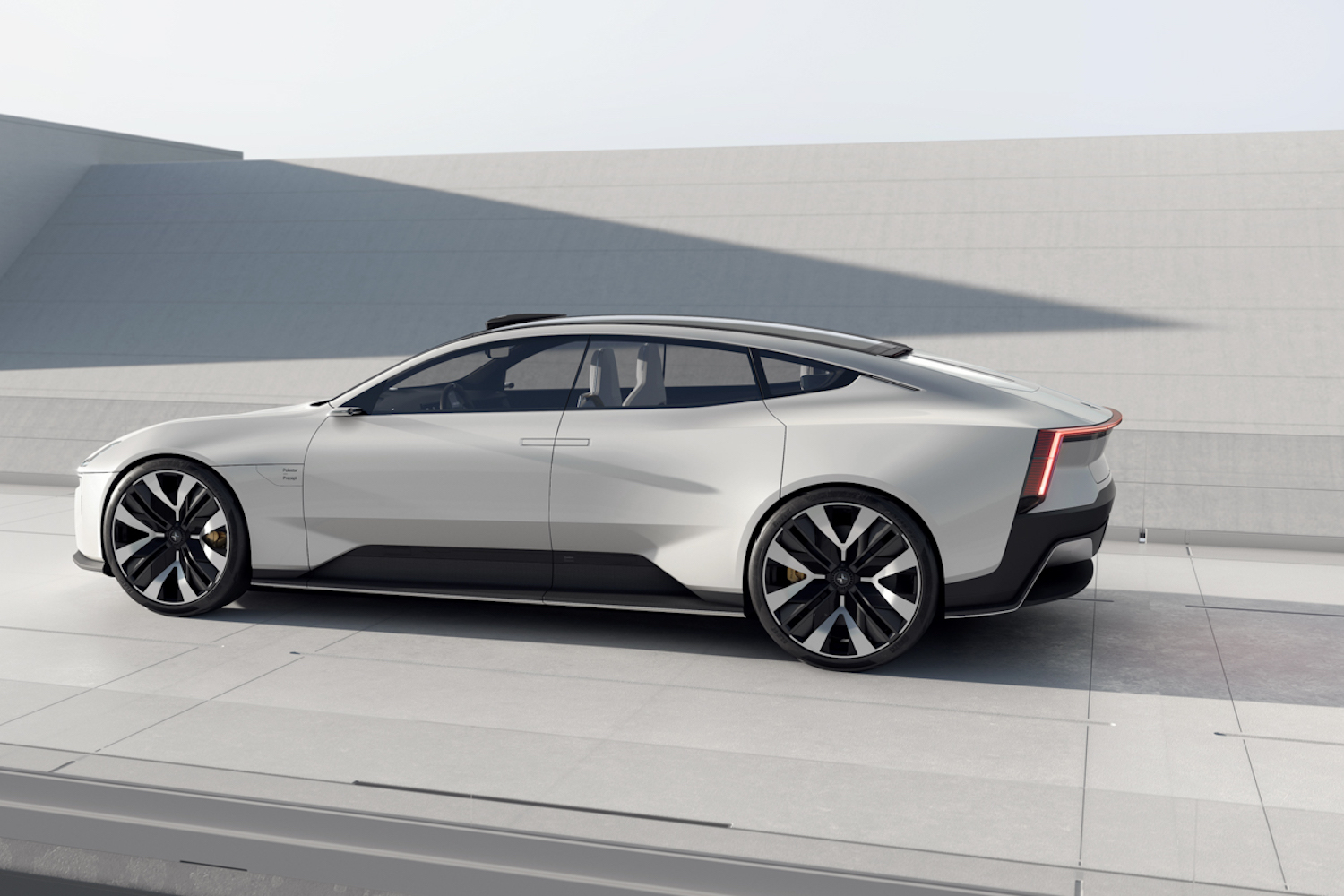 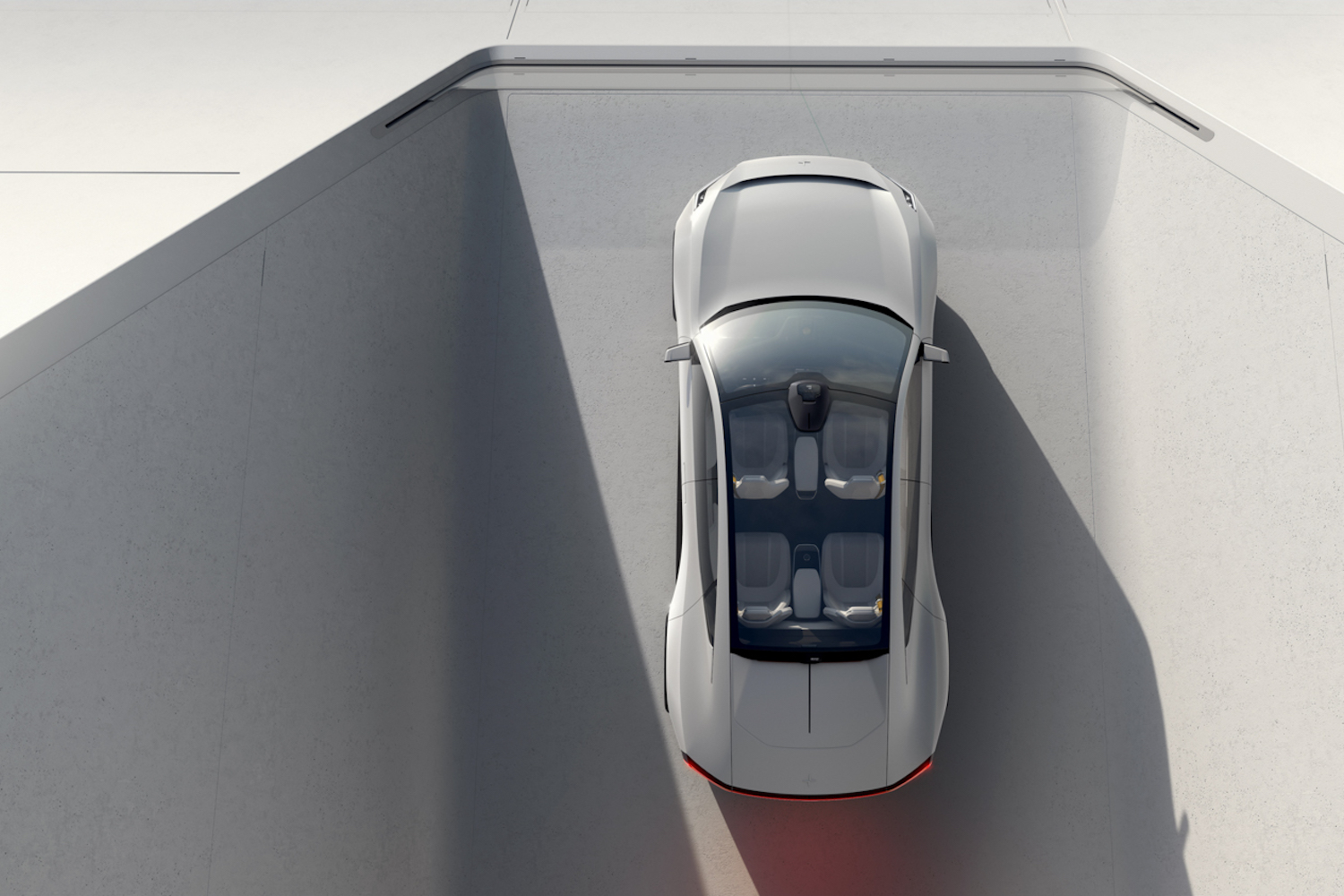 Sharp-nosed Precept concept is a preview of future Polestar models.

You've never seen a Volvo quite like this. Well, it's not actually a Volvo of course - it's a Polestar, made by Volvo's all-electric, high-performance spinoff brand, and it's a concept, called the Precept.

Dramatic design a break with the Volvo norm

Does anyone else look at this and think "what if they turned the Ferrari Modulo concept into a four-door electric coupe?" The Precept is certainly striking, and strikingly different. Up till now, Polestar's models have been heavily modified versions of existing Volvos (the Polestar 1 is a effectively an S90 coupe) or forthcoming ones (the Polestar 2 is basically the next V40 in electric form). The Precept, though, shows that Polestar is prepared to make a massive break with the traditions of Volvo design.

Most obviously, that happens up front, where the Precept's needle nose does away entirely with the usual upright Volvo grille, in favour of something rather more space-age. "Precept is a declaration, a vision of what Polestar stands for and what makes the brand relevant," comments Thomas Ingenlath, CEO of Polestar. "The car is a response to the clear challenges our society and industry face. This is not a dream of a distant future, Polestar Precept previews future vehicles and shows how we will apply innovation to minimise our environmental impact."

Unlike some concepts, the thinking behind the Precept is a little more practical than most. The wheelbase measures a very long 3.1 metres, which means both that there's acres of rear legroom, but that also means that there's room under the floor for a massive battery, which should give the car a very long range.

That lack of grille? Polestar says that this represents "a shift from breathing to seeing." Or, in other words, the space where the grille once was has now been taken up by sensors that feed data to the driver assistance and safety systems. Behind the panel at the front, there are two radar sensors and a hi-def camera, while on the roof there's a sophisticated LIDAR scanning pod.

On the style front, Polsetar seems to be self-aware of the car's sci-fi looks, describing the split-element LED headlights, with their 'Thor's Hammer' light strip, as having "a dynamic, more robotic and brand-defining interpretation."

At the front, there's also a distinct wing running across the leading edge of the bonnet, which smooths out the airflow and improves the car's range thanks to better aerodynamic performance. At the rear, a full-width light bar that blends into vertical aero-wings does a similar job.

There's no rear window - instead the panoramic roof continues as far back as it can, and instead of a rear-view mirror, there's a screen fed by a rear-facing camera. Cameras and screens also replace the door mirrors. Polestar says that the lack of a rear screen means that the tailgate can be bigger, and open wider, than usual.

Inside, Polestar has worked with fabric supplier Bcomp to create a cabin that's big on sustainable and recyclable materials. The use of flax-based composites for interior panels and seatbacks offer significant improvements, says Polestar, over conventional materials, including up to 50 per cent saving in weight and up to 80 per cent reduction of plastic waste. Seat surfaces are 3D-knitted from recycled PET bottles, bolsters and headrests are made from recycled cork vinyl, while carpets are made from reclaimed fishing nets. "These elements, combined with digital artistry, define a new premium luxury that surpasses the conventions of leather, wood and chrome" said a Polestar spokesperson.

The interior design us ultra-minimalist, with all controls and displays grouped onto a massive 15-inch touchscreen (with software powered by Google's Android operating system) in the centre of the dash, and a 12.5-inch digital instrument display in front of the driver. The two are linked by a 'light blade' that runs all the way around the interior, and the Polestar badge is set, 3D-style, into a chunk of Swedish crystal set between the rear seat headrests.

To go with the exterior safety sensors, the cabin gets a sensor suite of its own. Eye tracking will allow the car to monitor the driver's gaze and adjust the content of the various screens accordingly. Proximity sensors also enhance the usability of the centre display when driving.

Maximilian Missoni, head of Design at Polestar, says: "Polestar Precept's aesthetics are rooted in cutting-edge technology rather than looking back in time at historical, automotive references. At Polestar we see technology as an enabler, as a tool to solve our society's problems and we translated this attitude into a new set of design principles. The combination of sustainable materials and high-tech smart systems opens an entirely new chapter of avant-garde luxury design and shows where Polestar is heading."