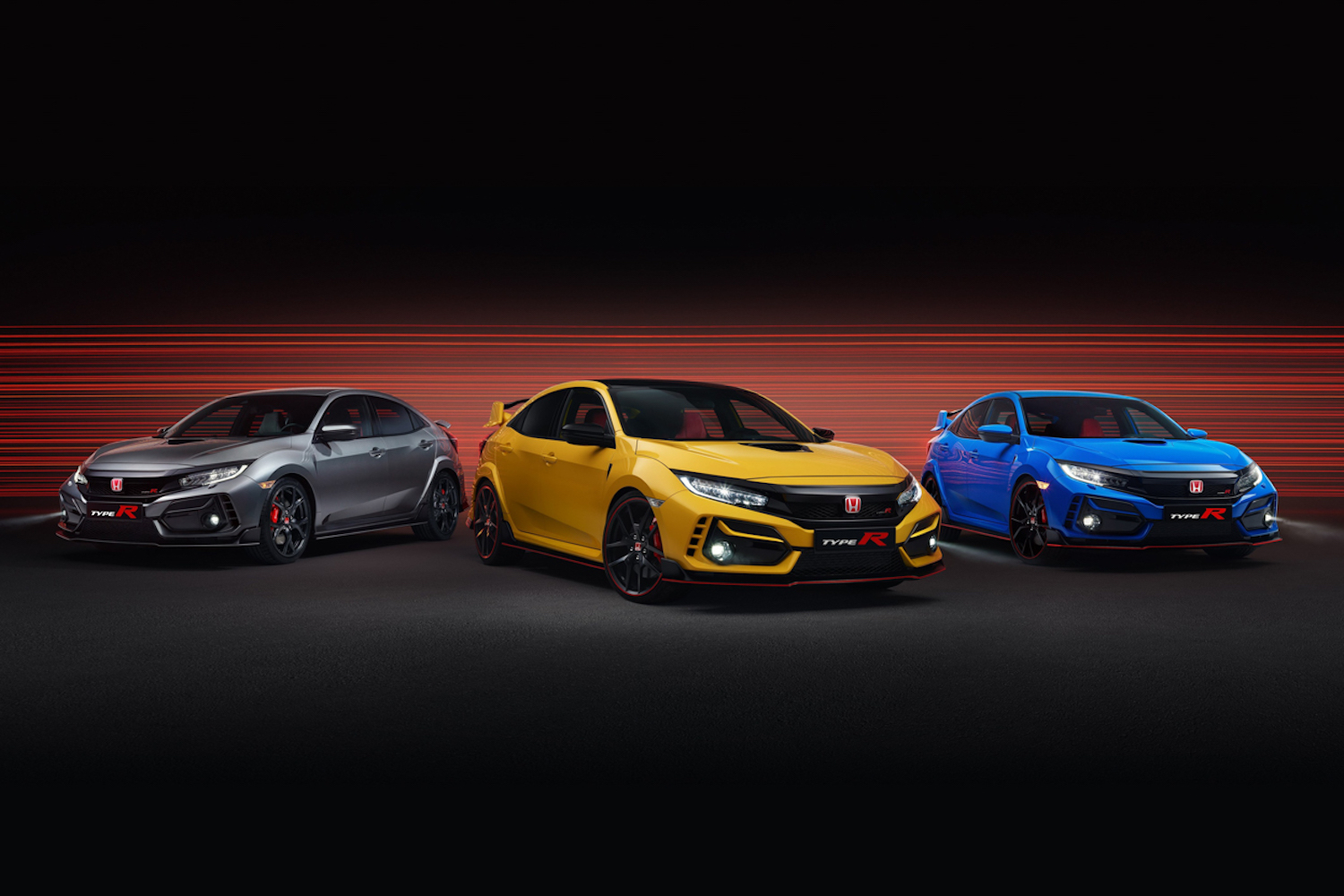 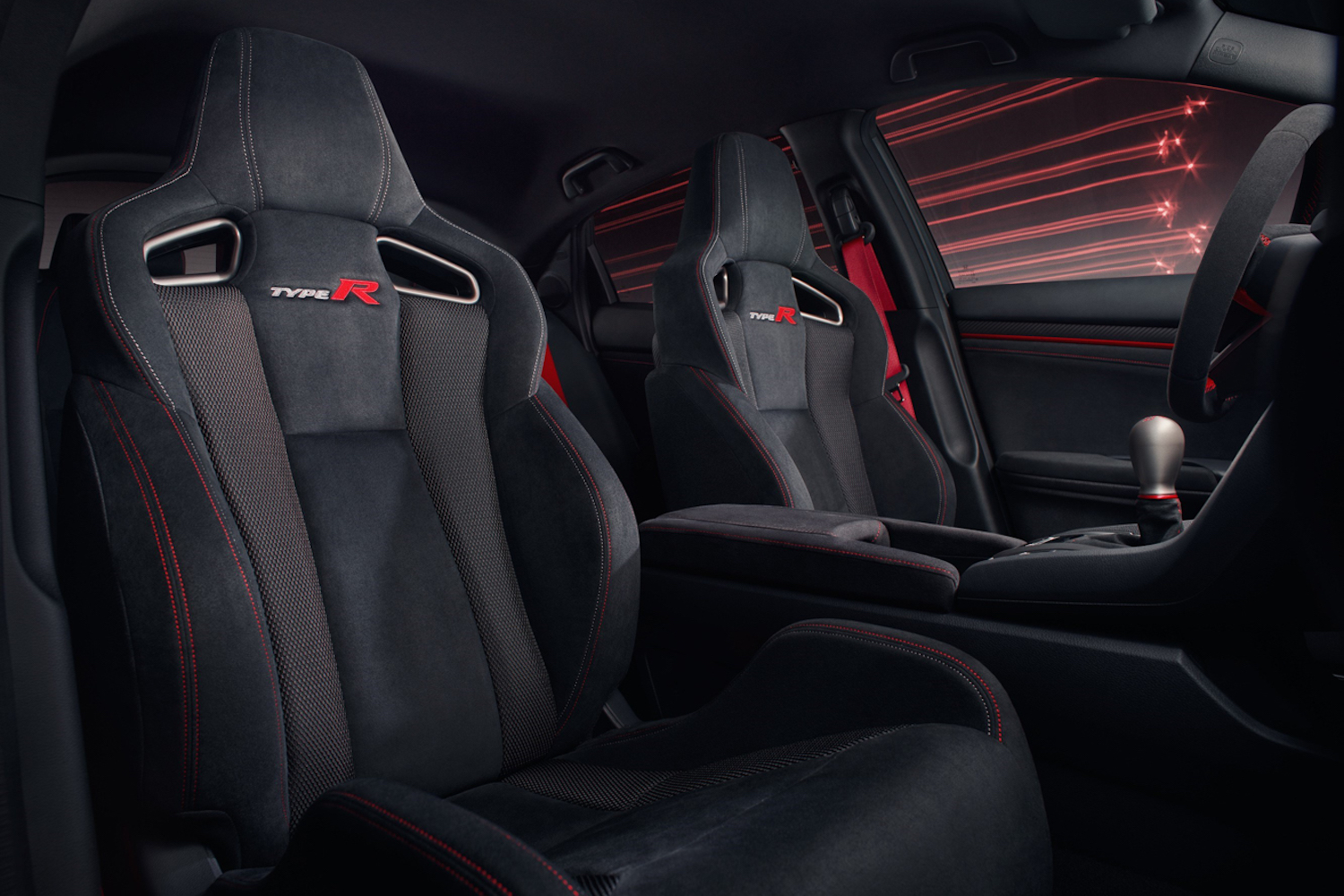 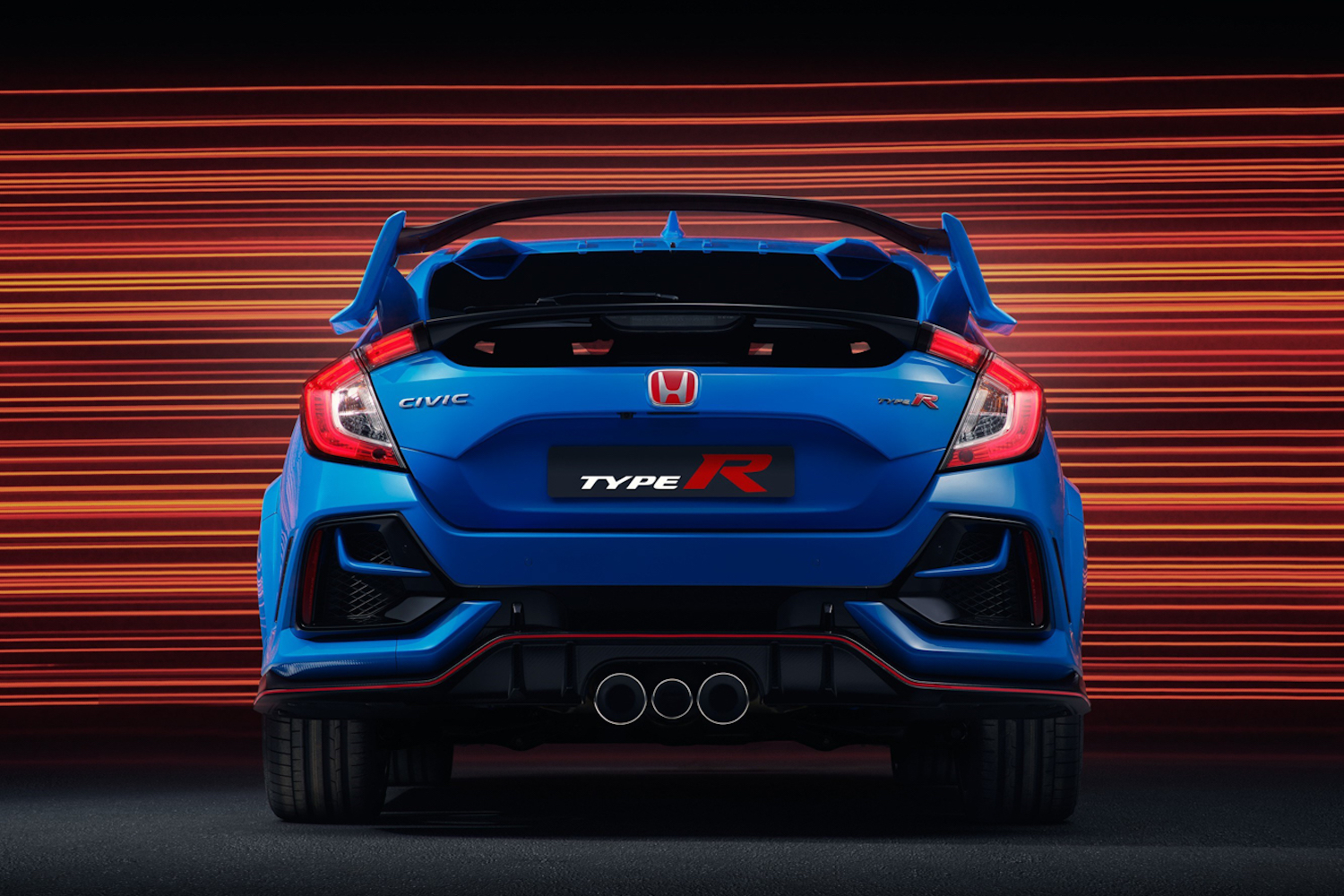 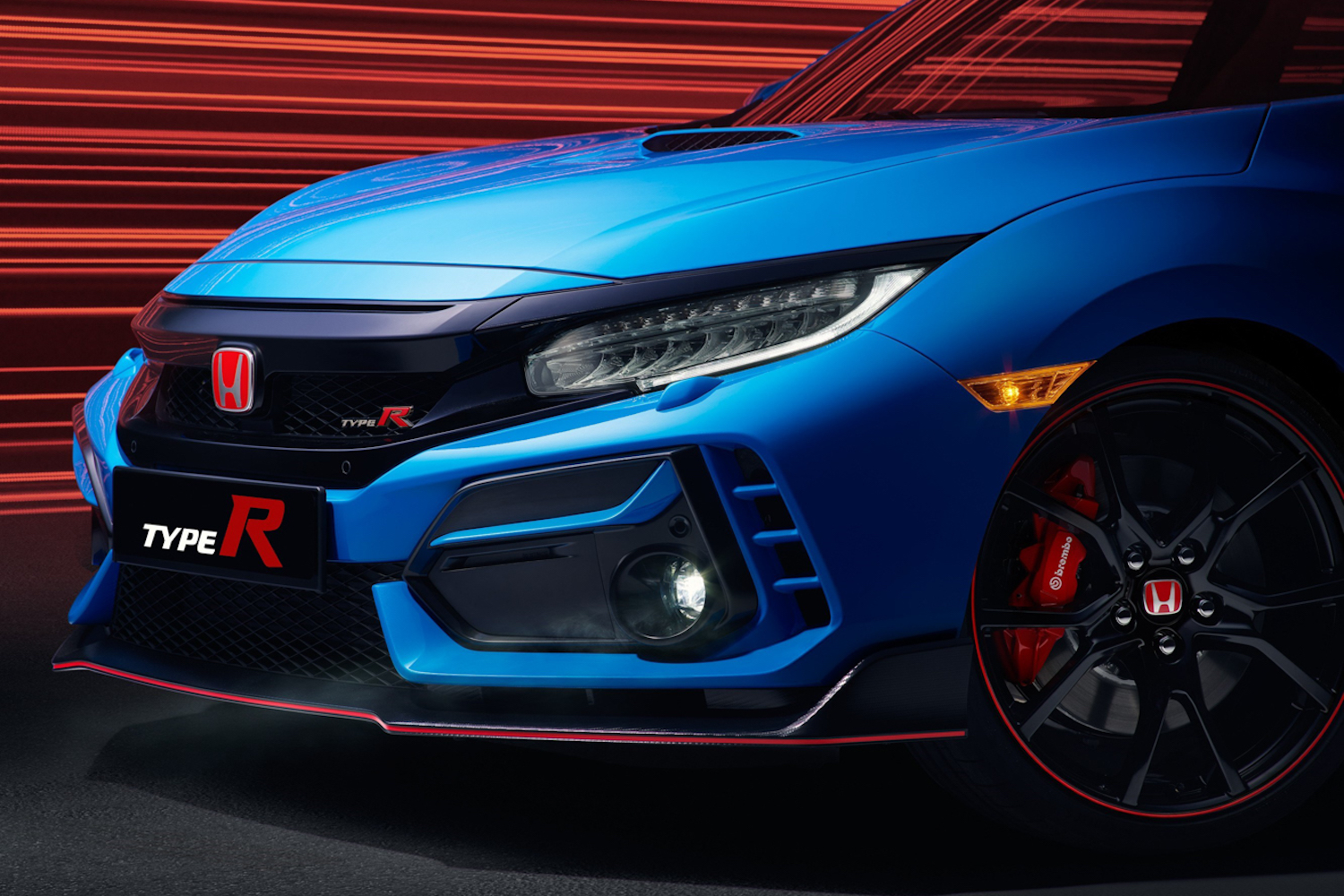 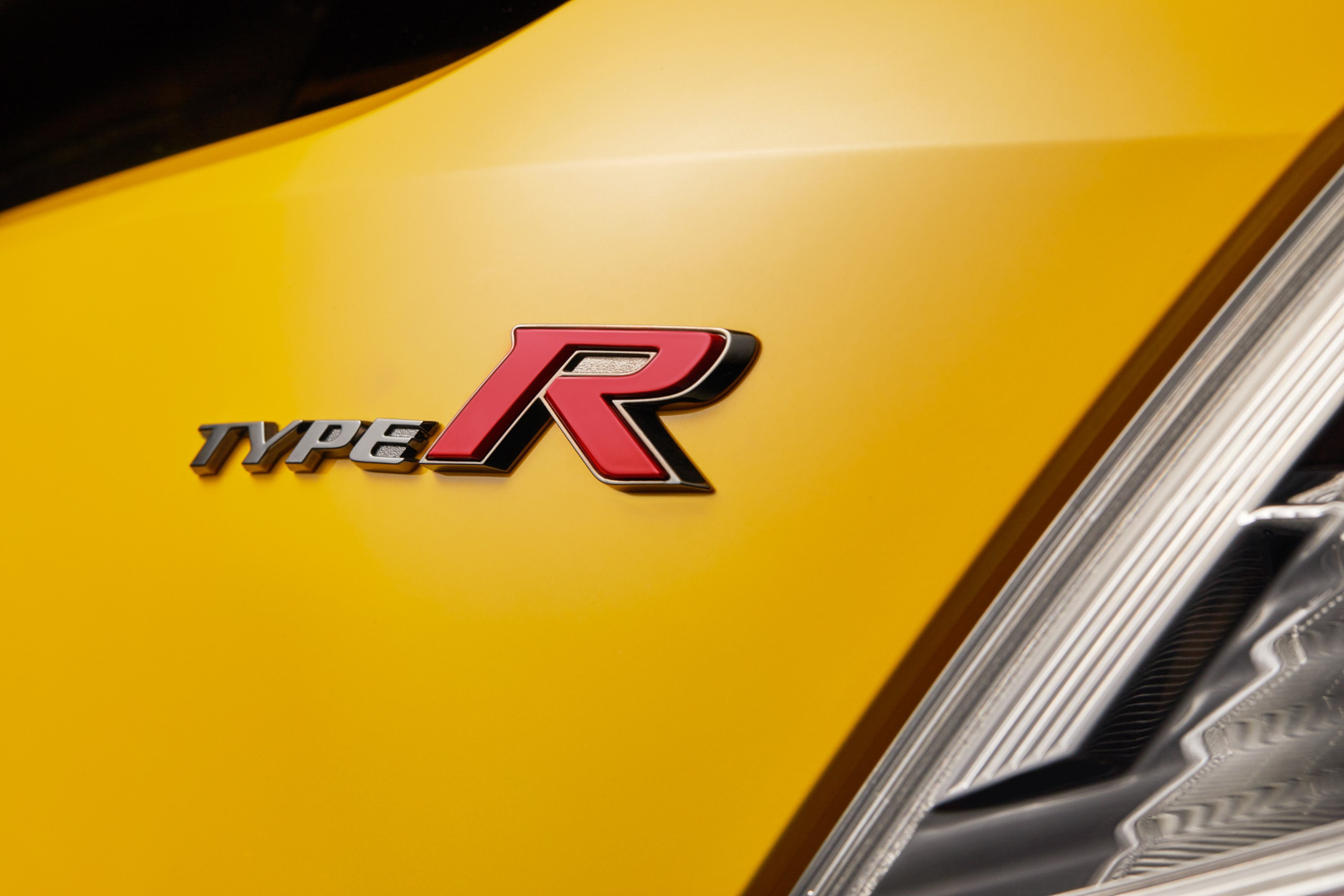 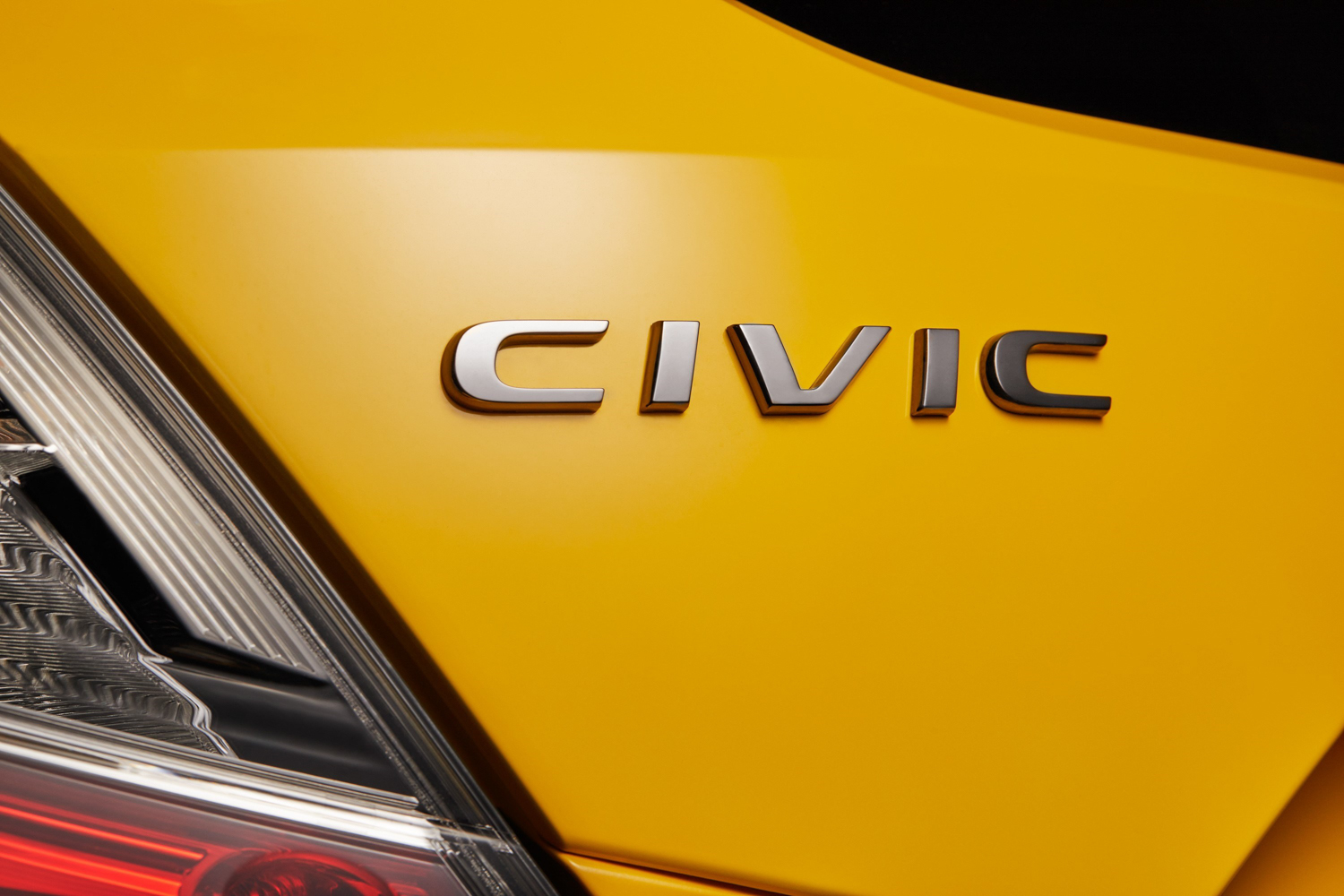 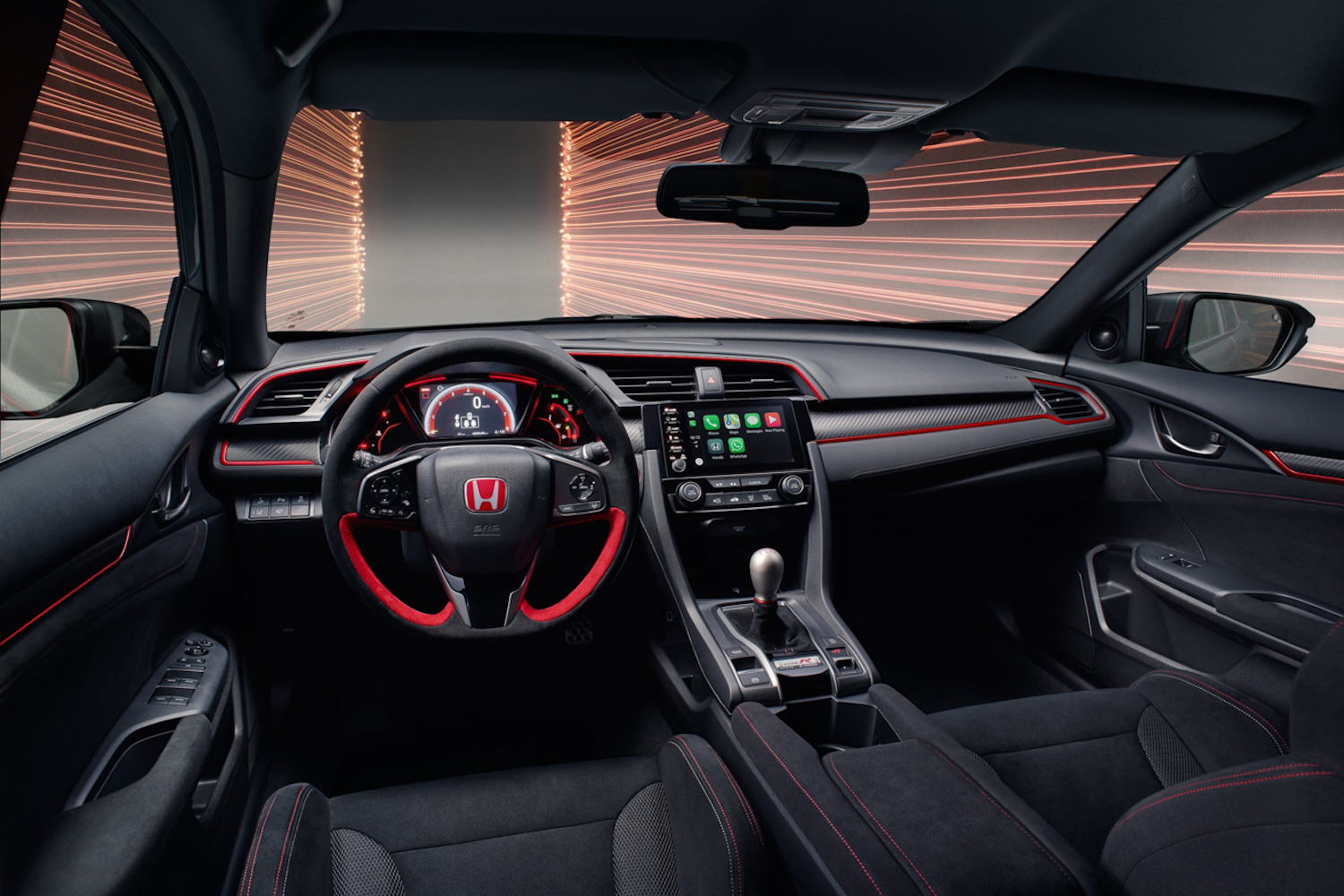 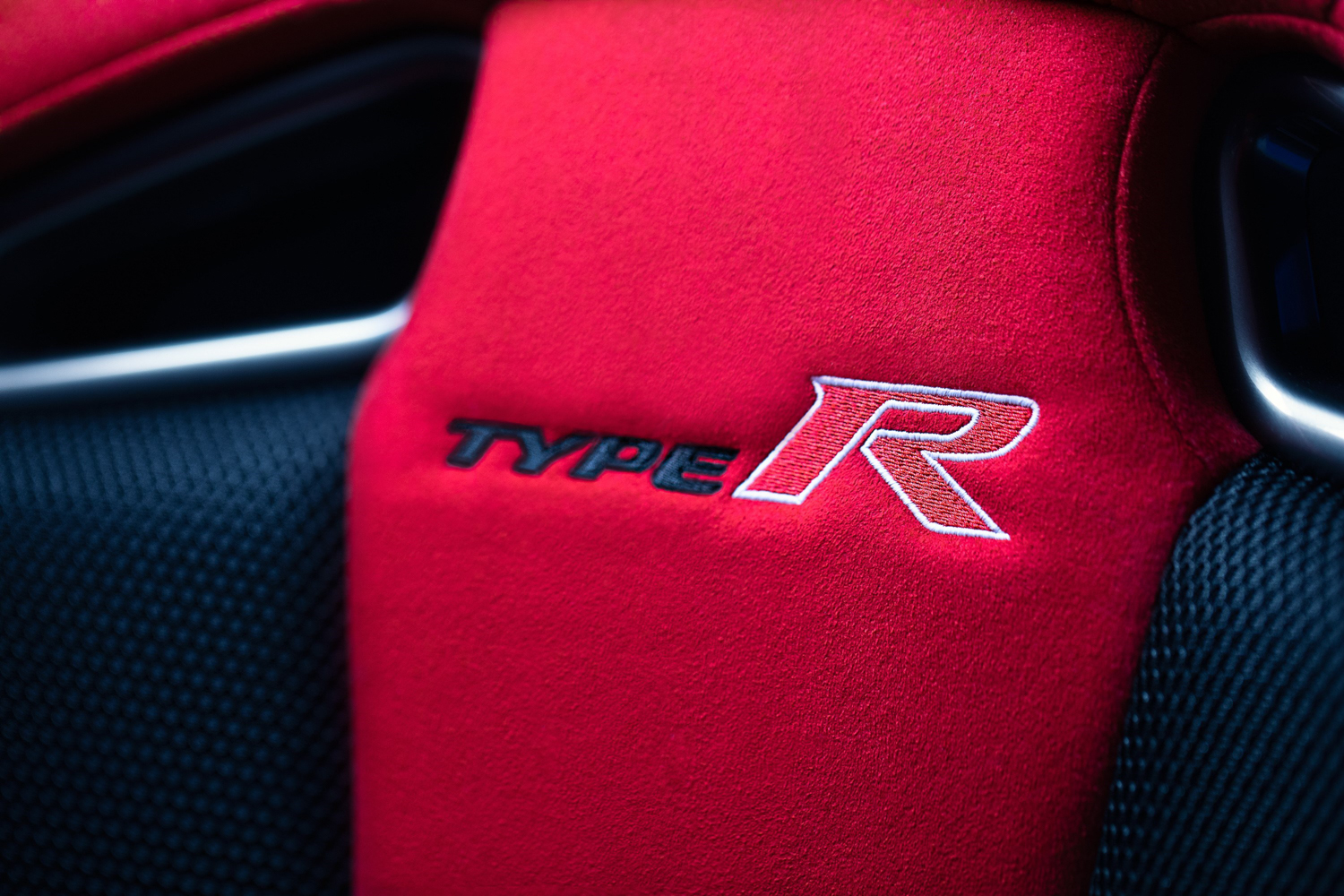 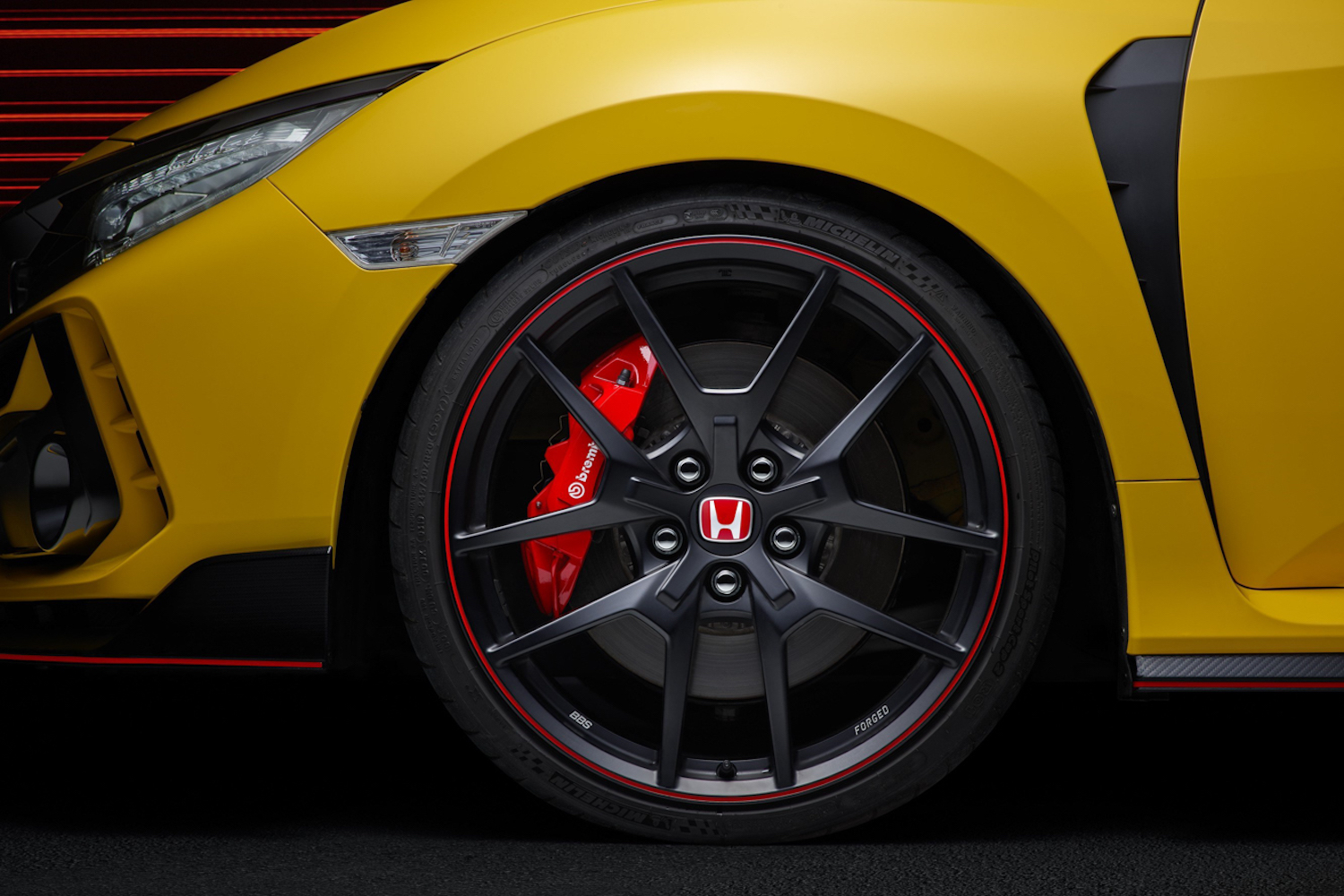 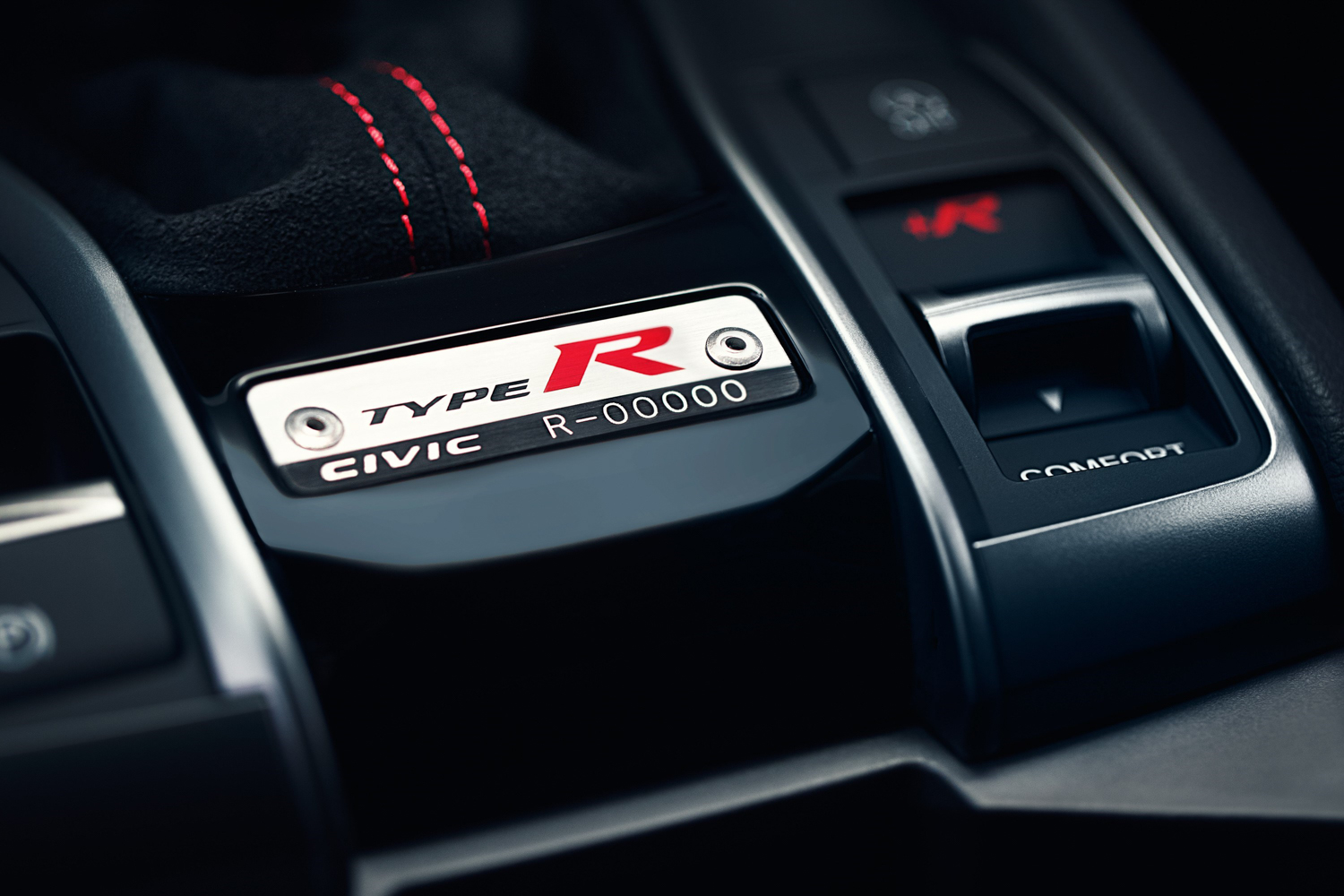 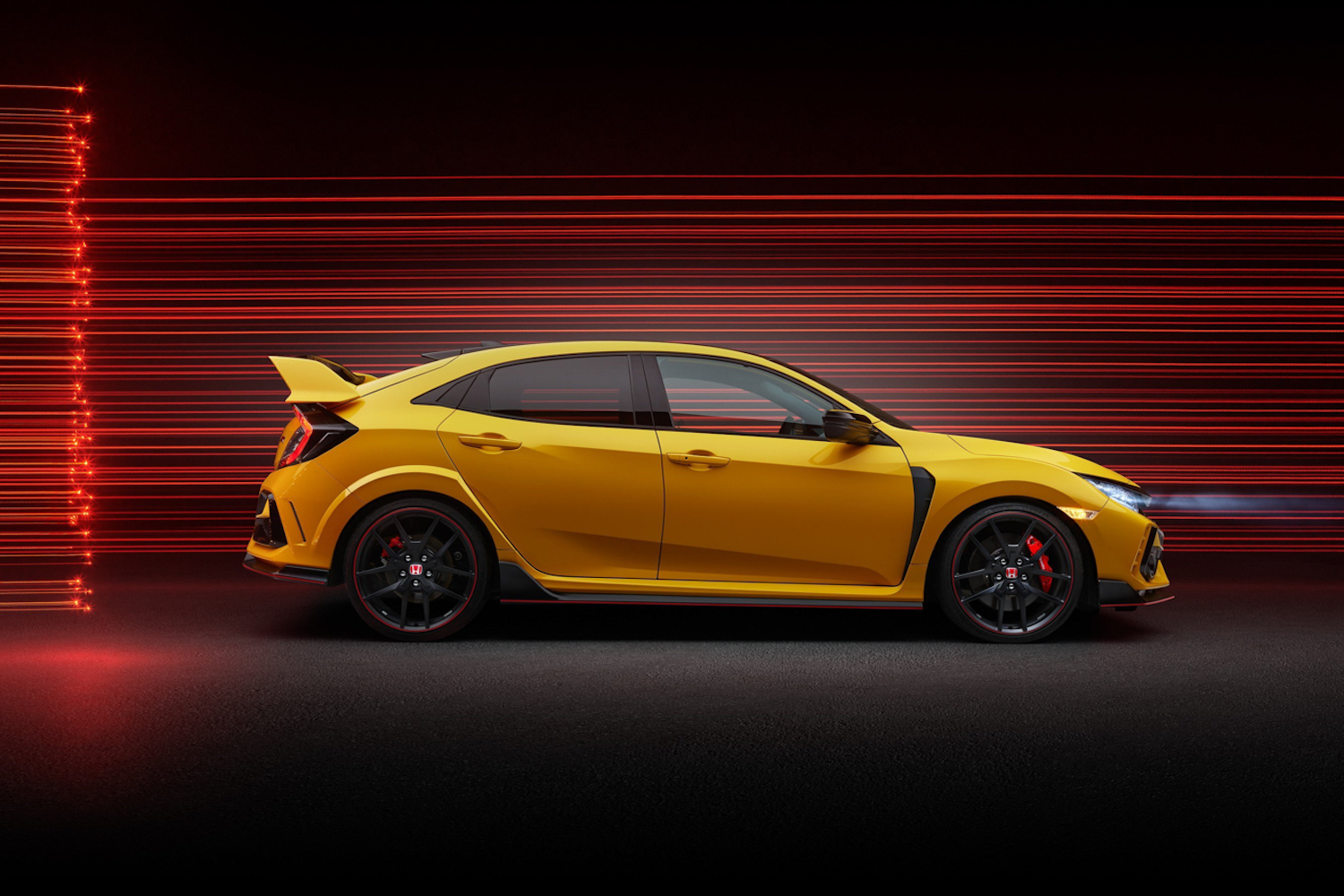 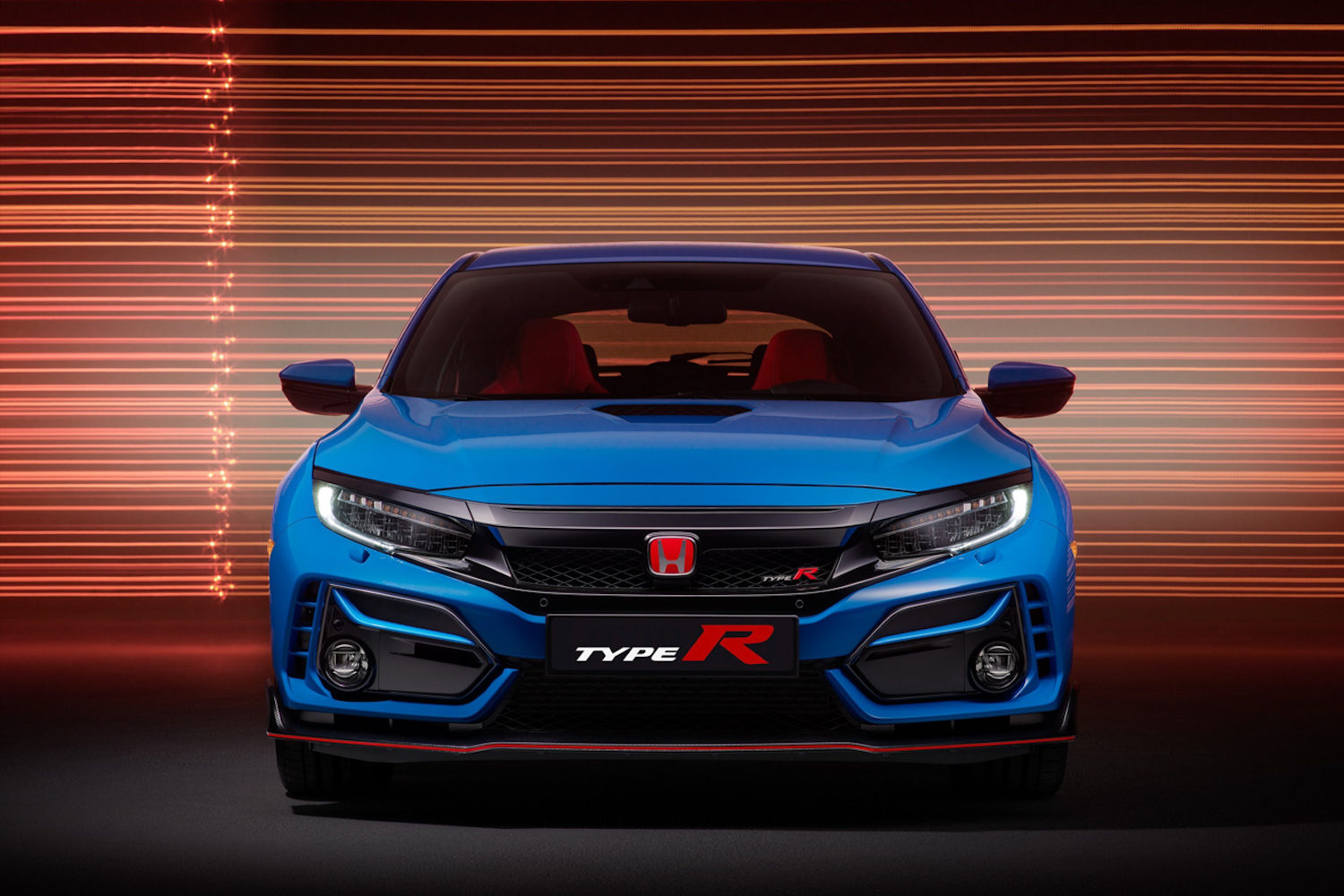 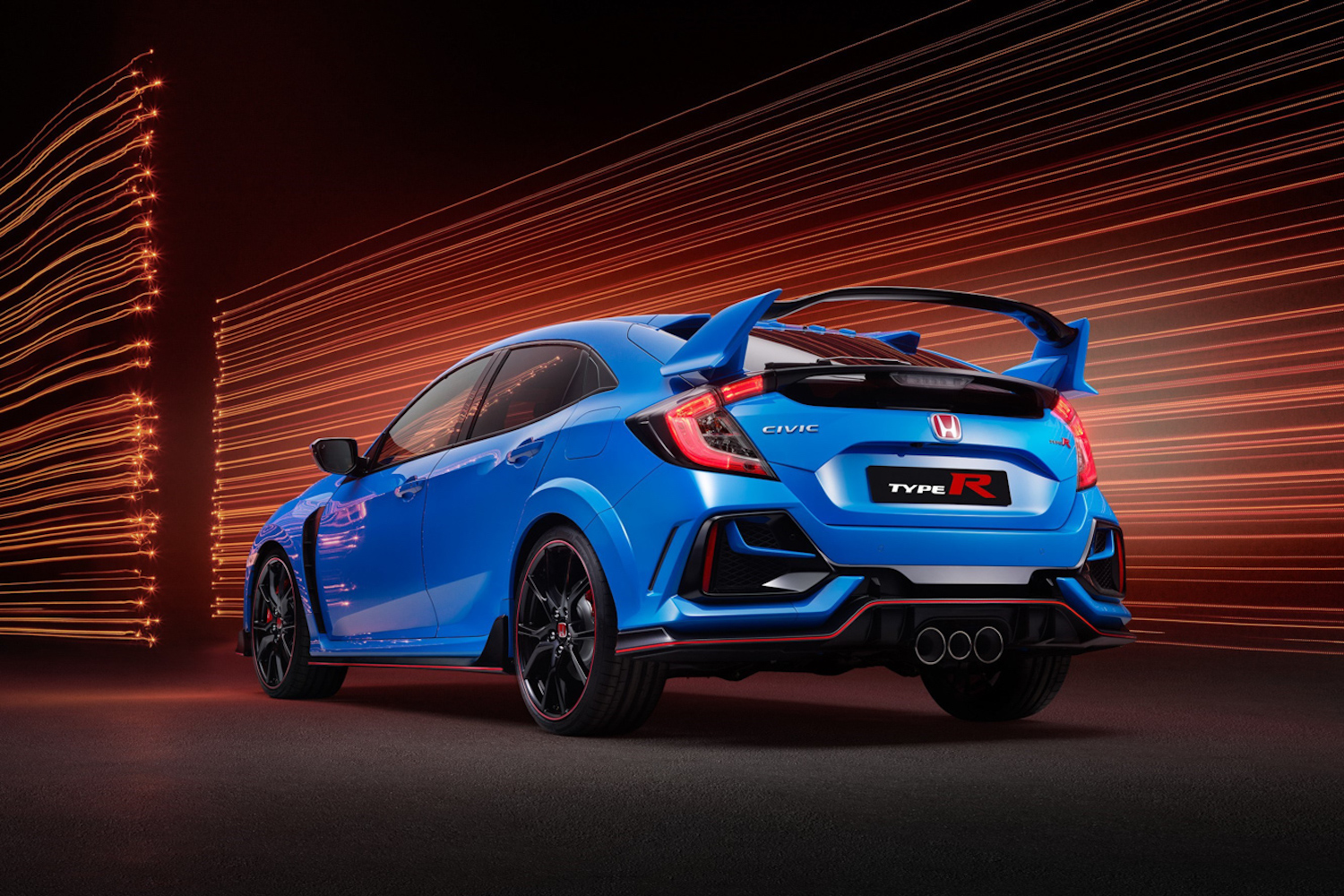 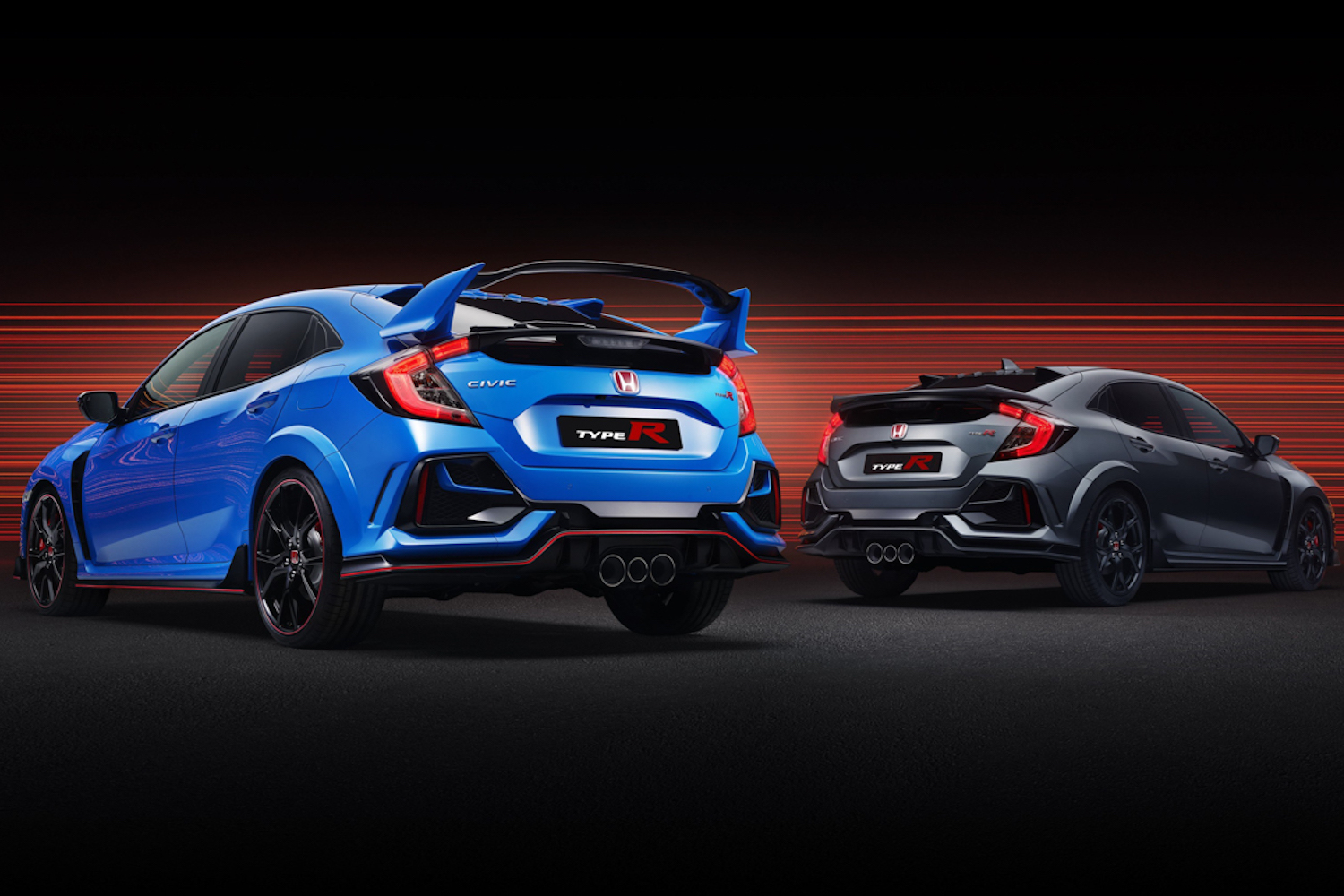 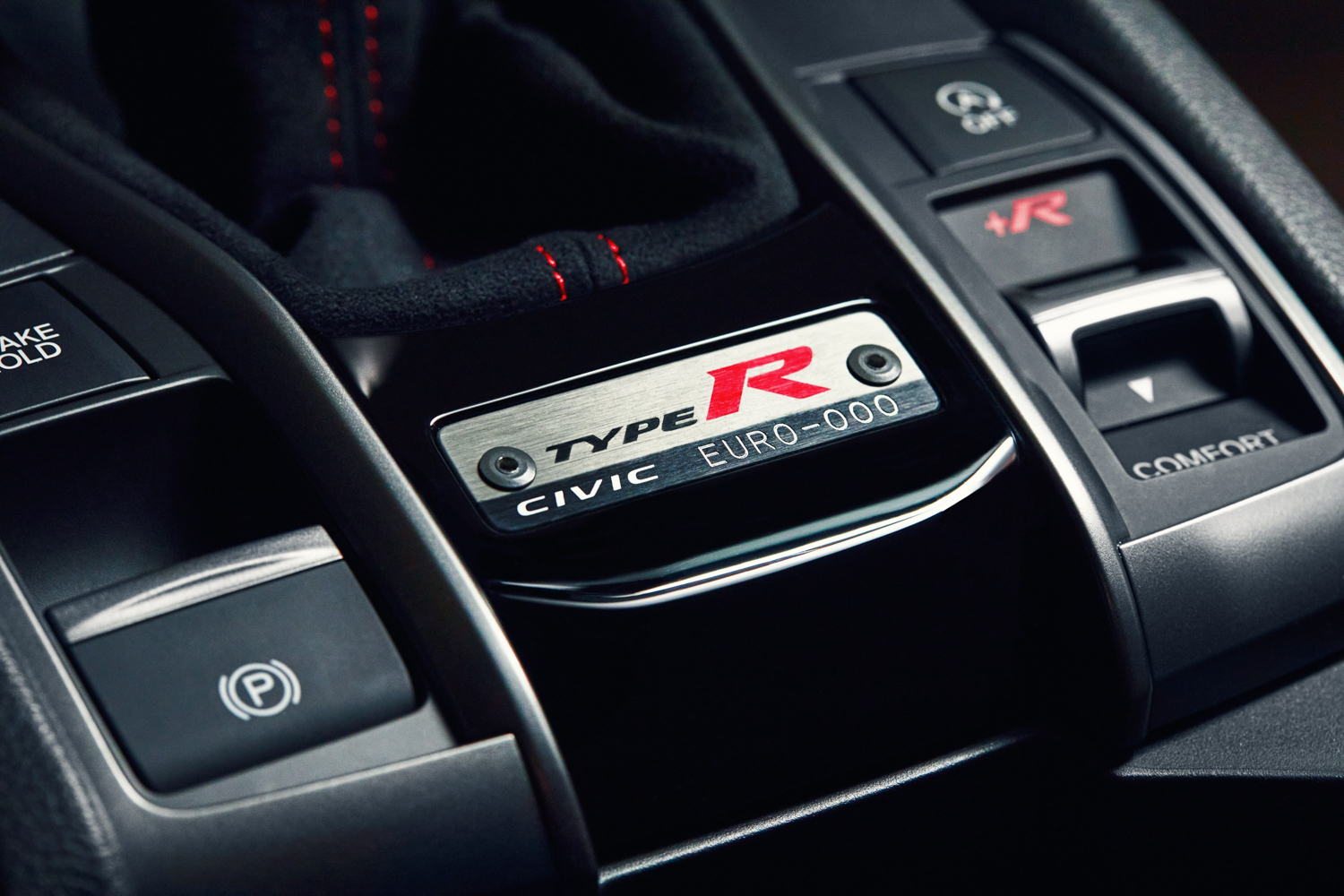 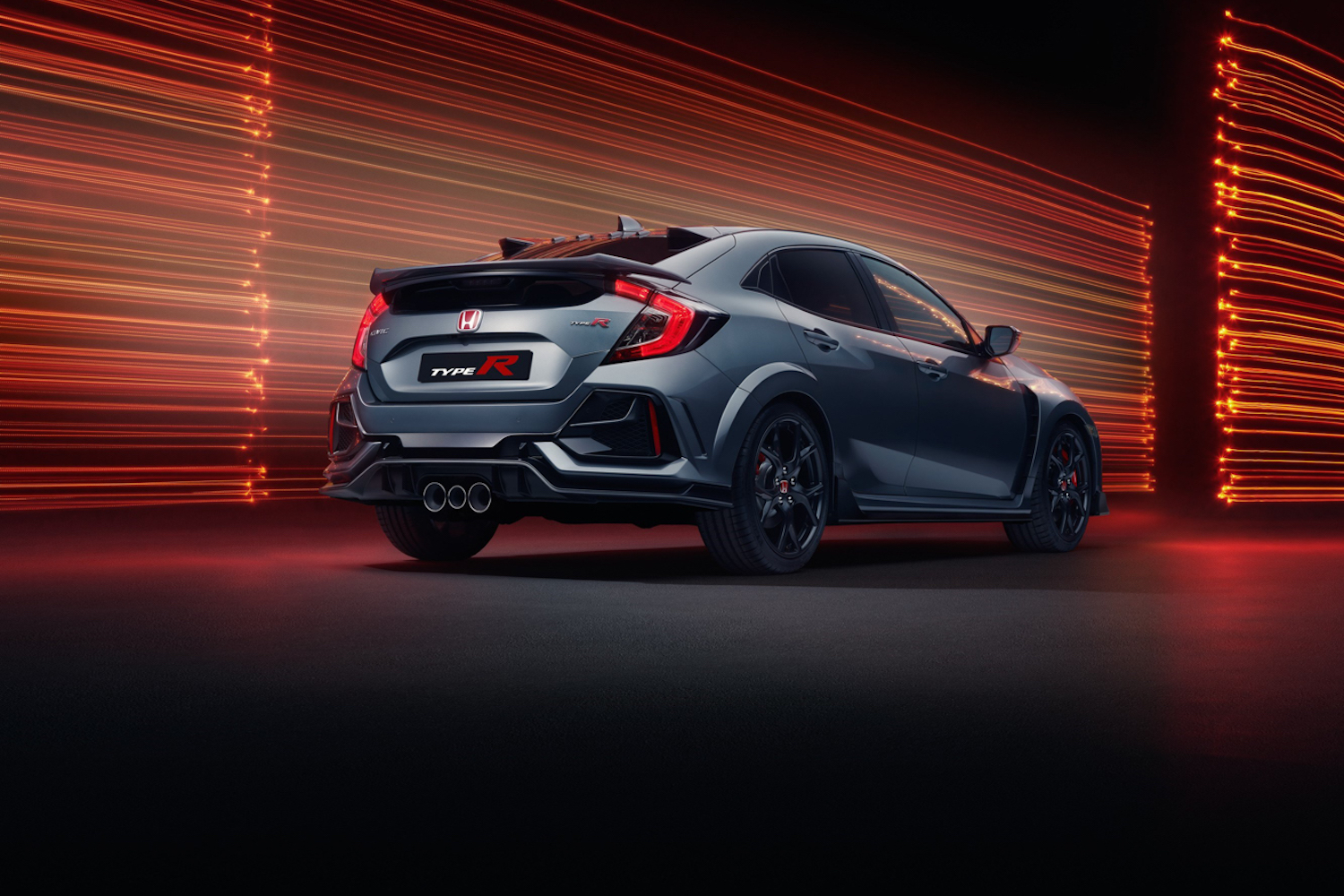 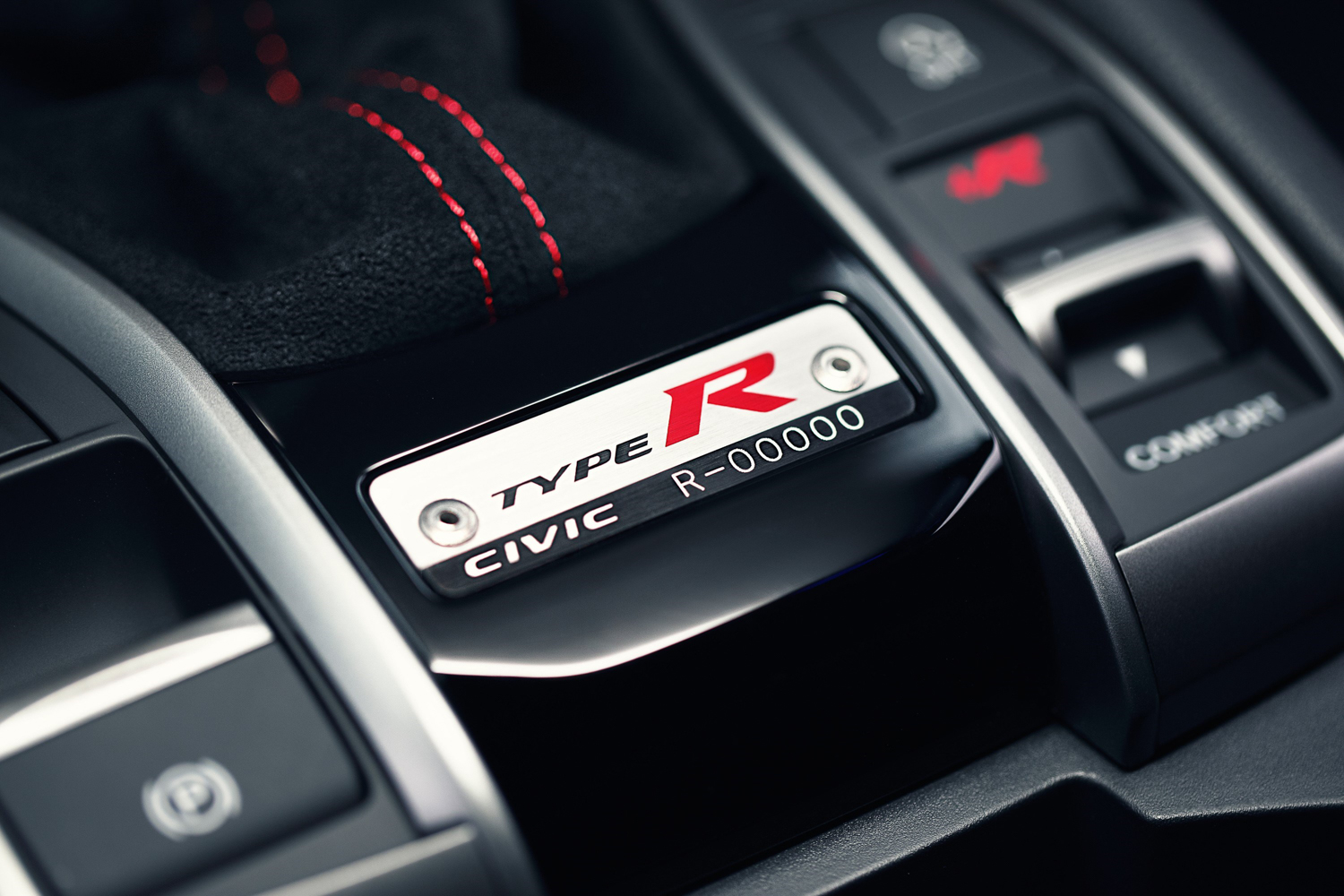 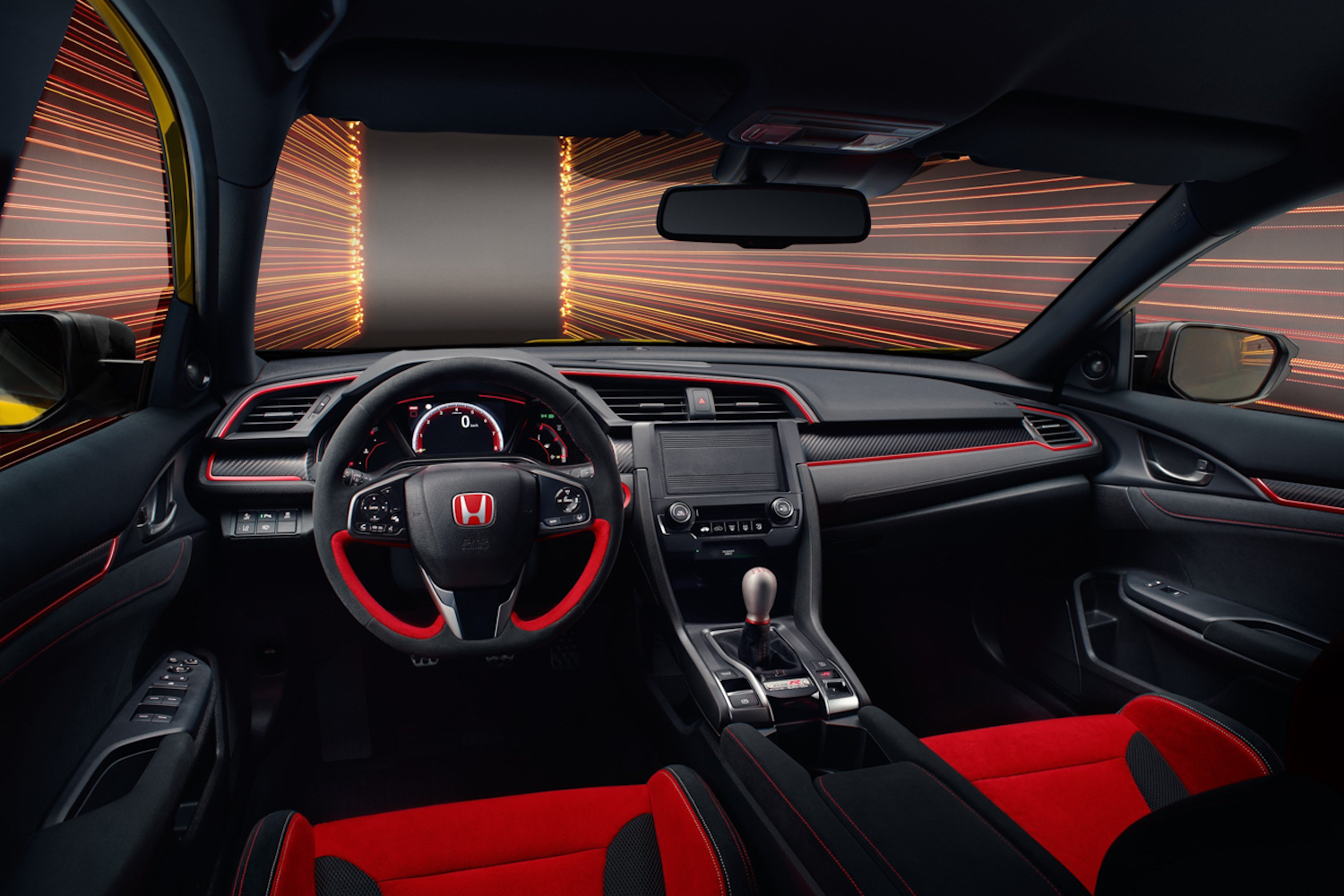 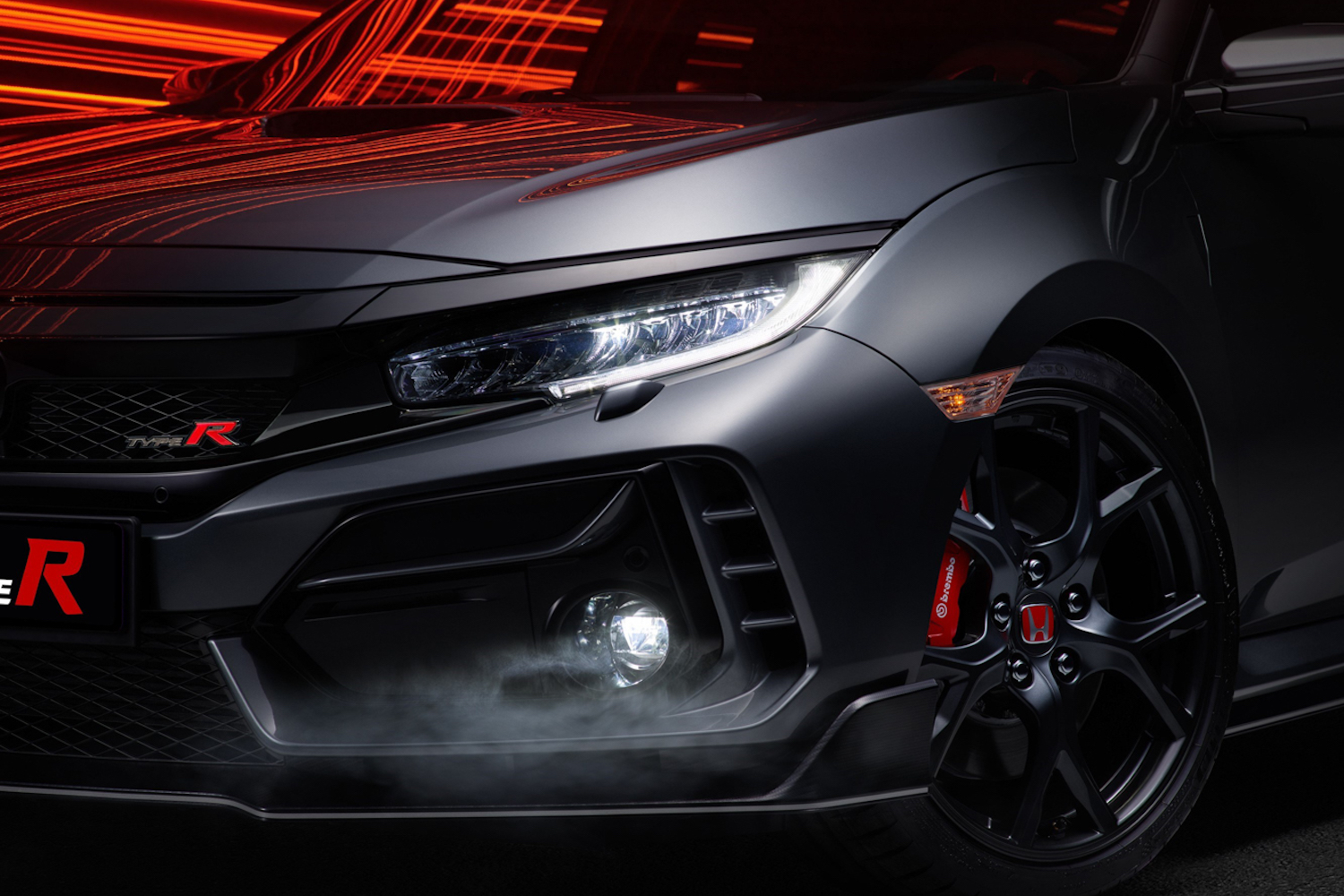 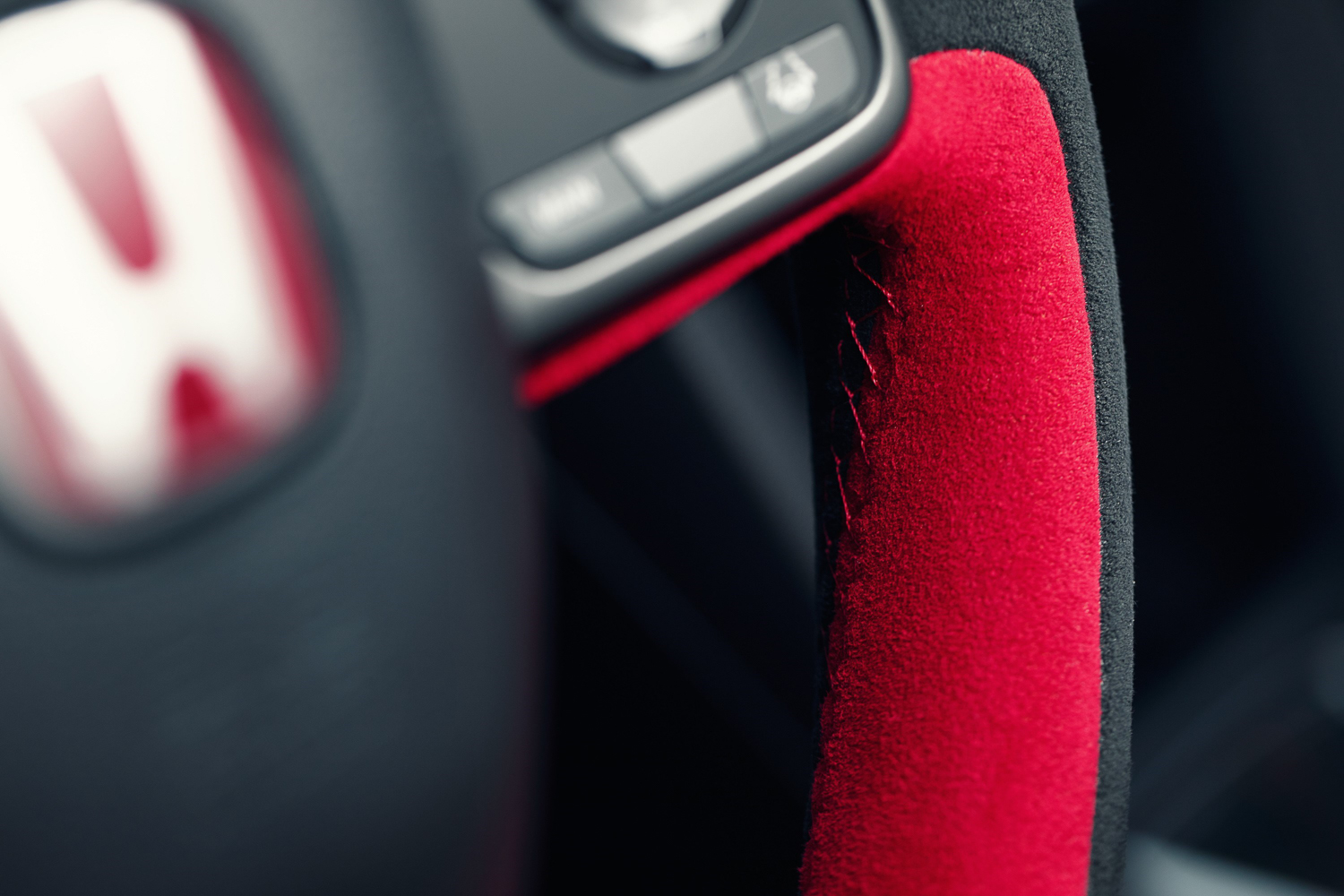 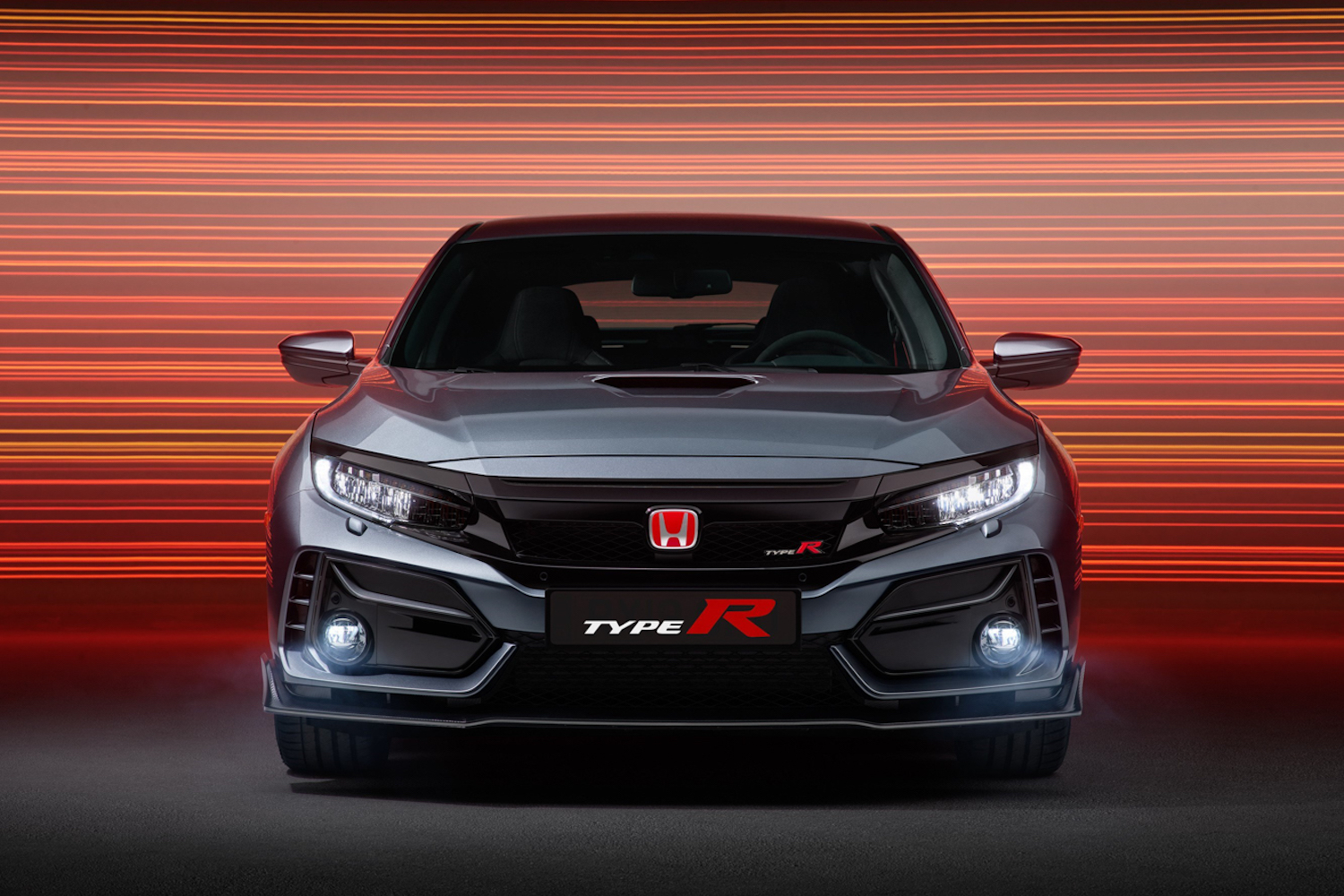 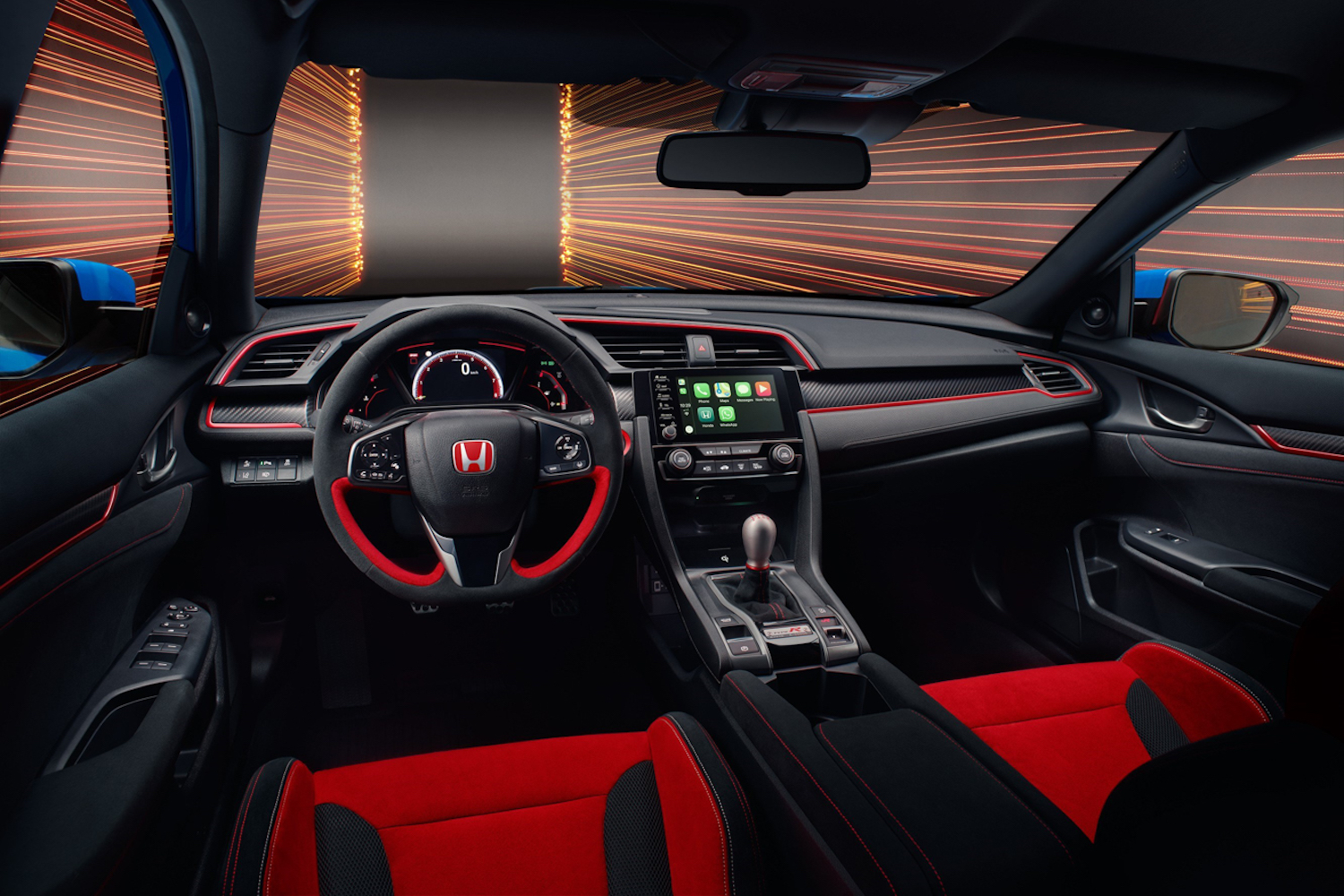 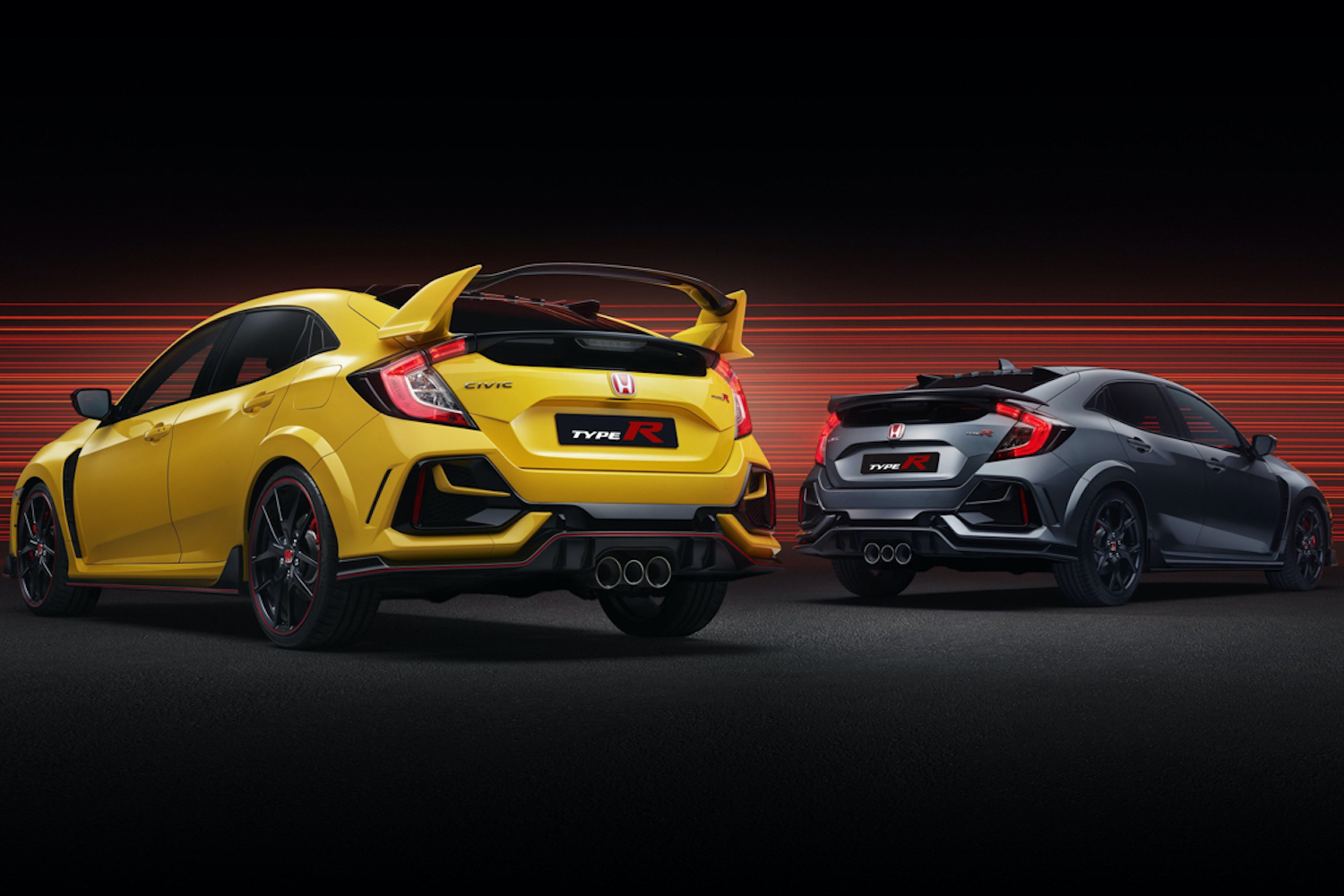 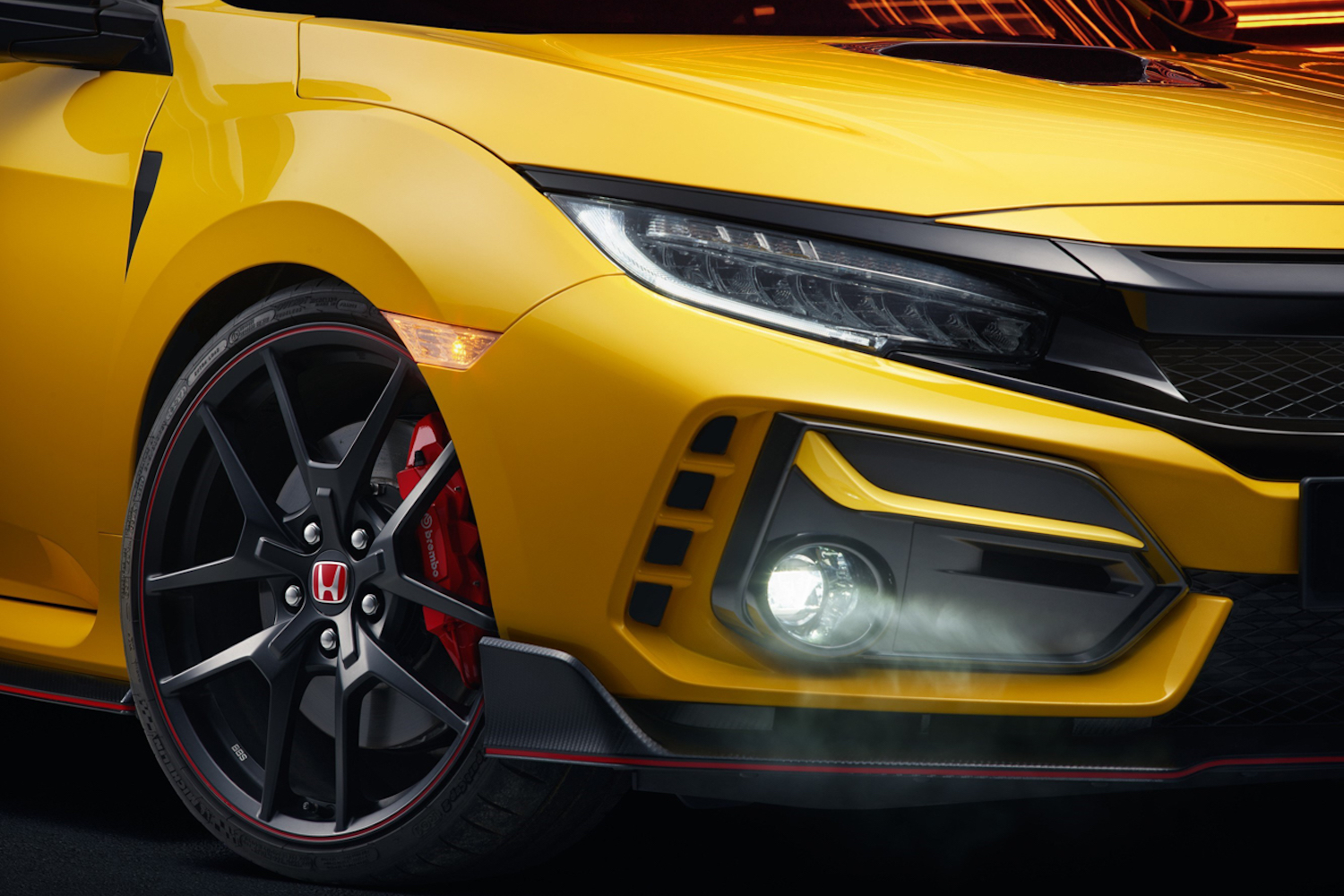 Honda creates milder and hotter versions of the Civic Type-R.

Honda is giving the mighty 320hp Civic Type-R hot hatch a makeover in line with the updates for the rest of the conventional Civic range. This is no mere bumper-and-lights tweak, though. Honda is actually creating two new variants of the Type-R, designed to appeal to distinctly different tastes...

The first is the one that will have the broadest appeal. The Type-R Sport Line is basically the Type-R but with the visual volume turned down. The most obvious difference is that the huge rear wing of the standard car is gone, replaced by a much more subtle, lower-set, boot spoiler (rather similar to what Ford did with the blessed Escort Cosworth all those years ago...).

Other updates to the Sport Line include an all-black interior (ditching the rather fetching red bucket seats of the standard Type-R, although the black seats do get red stitching) and new 19-inch alloy wheels. Honda says that in spite of the circumcised rear wing, the Sport Line "retains the outstanding performance that is a trademark of Type R models."

There's a greater focus on comfort for the Sport Line, too, thanks to extra sound-deadening panels to cut down on noise, vibration, and harshness. Those 19-inch wheels are also wrapped in Michelin Pilot Sports 4S tyres which have a softer sidewall, which improves ride comfort (not that, to be honest, that was ever much of an issue for the Type-R).

Perhaps rather more exciting will be the Type-R Limited Edition. This one retains the massive rear wing, and is a hardcore, stripped-back version, designed for track days, really. Think of it as a Civic Type-R GT3. Made in strictly limited numbers, just 100 will be making their way to Europe, and yes - you can have it in this distinctive Sunlight Yellow paint with dark-chrome trim. There's also contrasting gloss black paint on the roof, wing mirrors and intake vent on the bonnet.

To make it lighter and more track-focused, Honda has binned the air conditioning system, the infotainment, and has cut back sound-deadening materials in the roof, rear hatch panel, front bumper and dashboard. All of which saves 47kg, although there's the potential for more - Honda says that the Type-R LE retains its rear seats (unlike, say, the Renault Megane RS Trophy-R) so you could always get busy with the spanners and save a few more kilos...

Updates for the standard Type-R too

The standard Civic Type-R GT gets some model year updates too. Those include redesigned bumpers, new LED headlights, a new air intake and grille, and an updated radiator that delivers improved engine cooling performance. Honda hasn't skimped on the development time, either - noticing that the new front-end styling meant a tiny reduction in downforce, the engineers countered that with a redesigned front under-bumper air dam, which is now deeper and includes new ribbed sections on each end to divert air back onto the spoiler.

The Type-R also gets some suspension tweaks to give it sharper, more responsive handling (not that we had noticed any failings in that department). There are new compliance bushings and new lower-friction ball joints result in sharper steering feel. At the rear, bushings for the lower B-arms have been stiffened for an eight percent improvement in lateral loads, resulting in better toe-in characteristics when cornering.

The brakes have been upgraded too, and are now lighter to the tune of 2.5kg at the front. Thermal efficiency is also improved, and the brake pedal travel has been reduced by 15mm.

Inside, there's a new Alcantara wrap for the steering wheel, and the already brilliant gearshift has been further improved, with the addition of a 90-gramme counterweight in the shift knob. There's also now a new system called Active Sound Control (ASC) which features individual settings for Type R's Sport, +R and Comfort driving modes. It works through the audio system's speakers to enhance the engine sound during aggressive driving in Sport and +R modes and refines it in Comfort mode during acceleration.

Finally, Honda is introducing some on-board telemetry for the Type-R. Called the LogR system, it combines with a smartphone app to record the car's data when you're running on track days. The data is broken down into three areas. Performance Monitor logs current gear, coolant and oil temperatures, oil and atmospheric pressures and engine intake air temperatures, and also gives you the option of viewing a a "G-Meter" view that indicates acceleration, braking, and cornering on a "bowl" graph, or a "3D" view that provides a bird's-eye visual of the car's cornering, braking, and acceleration behaviour.

Log Mode is all about finding those little extra tenths of a second on a hot lap, and gathers data on acceleration, braking, cornering G, and other parameters. The app encourages smooth, controlled driving through the use of a colour-coded trace of each lap.

Finally, there's Auto Score, which takes all of the above data and turns it into a numeric score reflecting your driving skills. That's not going to become addictive. Nope, not at all.