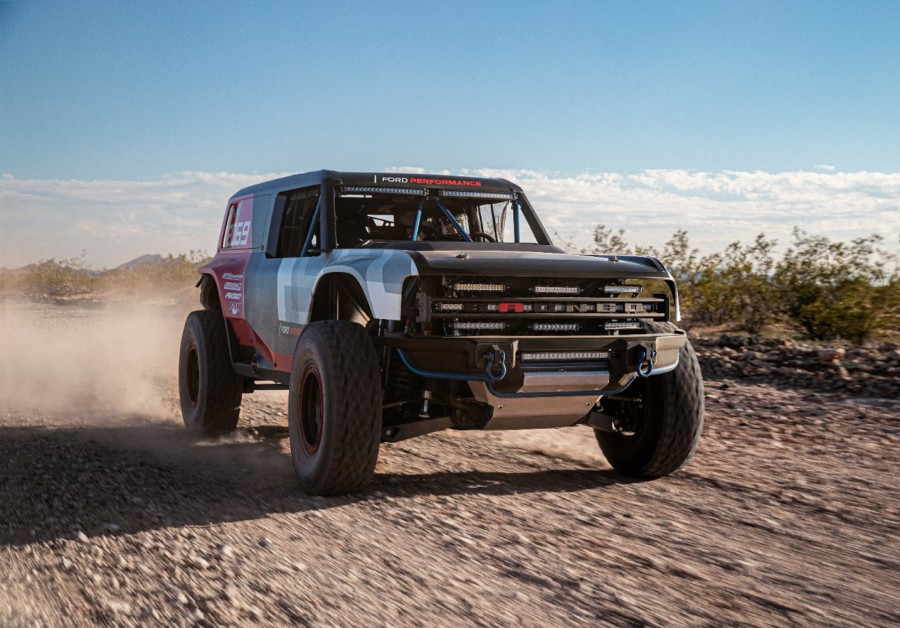 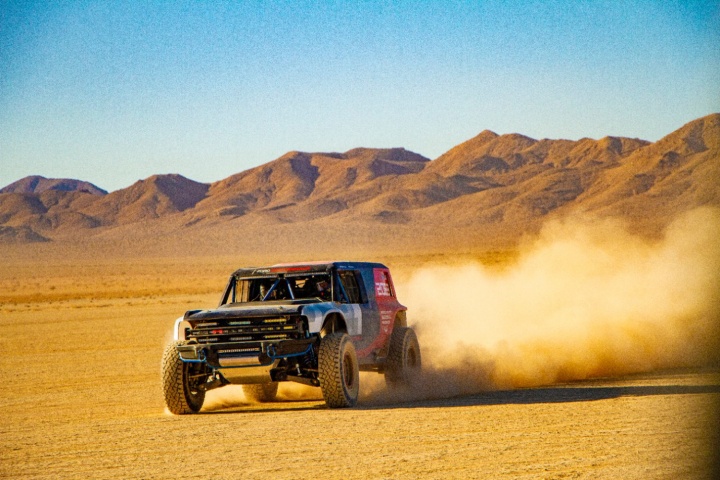 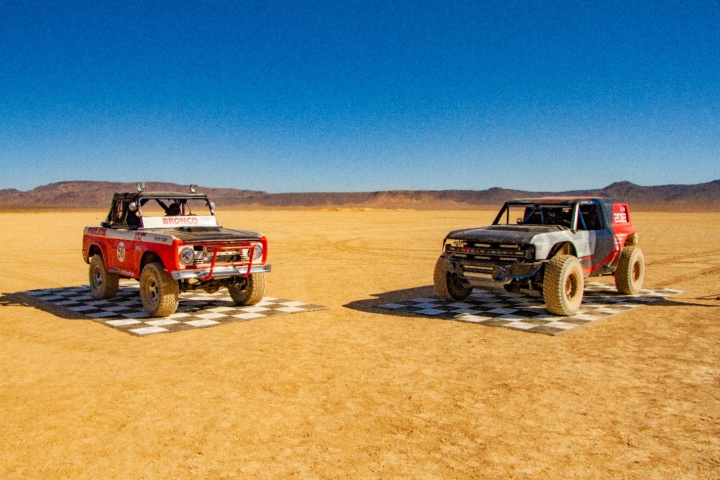 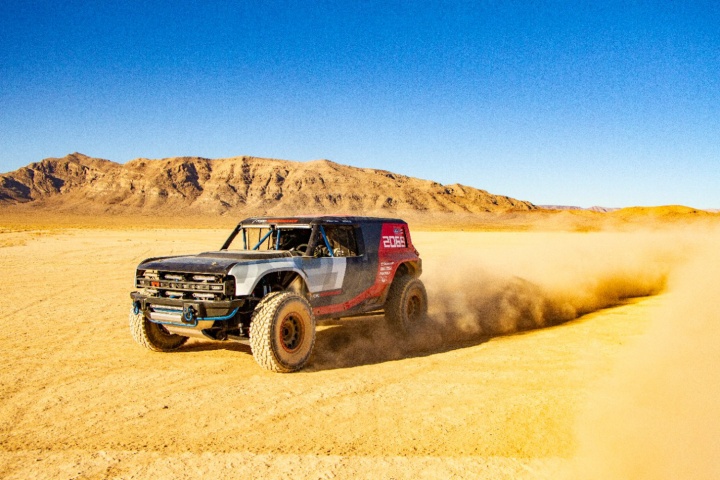 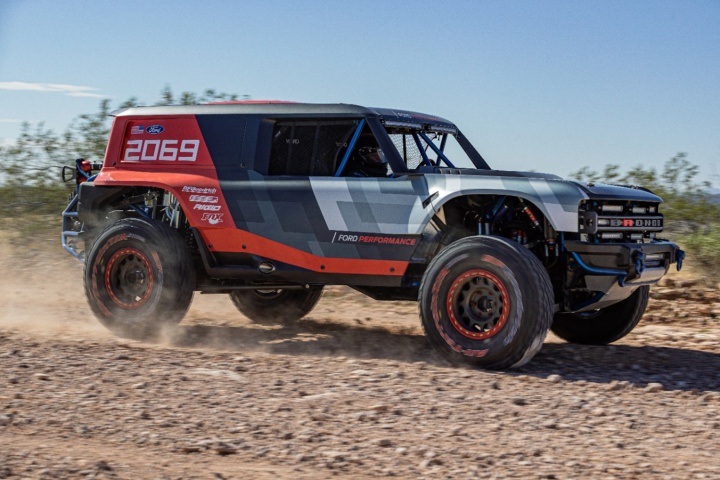 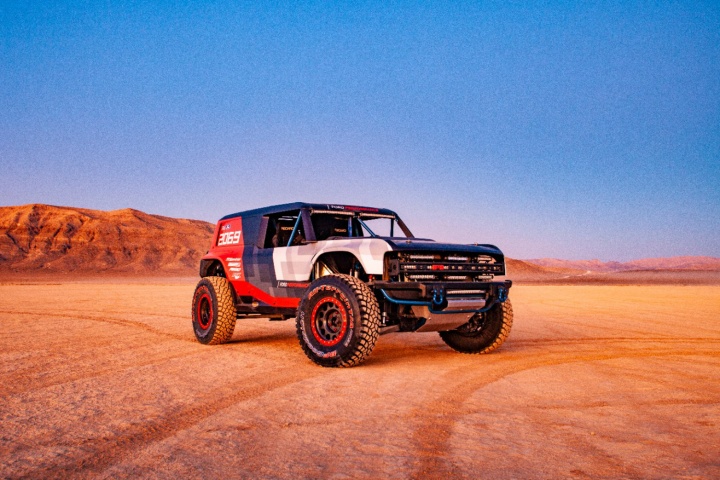 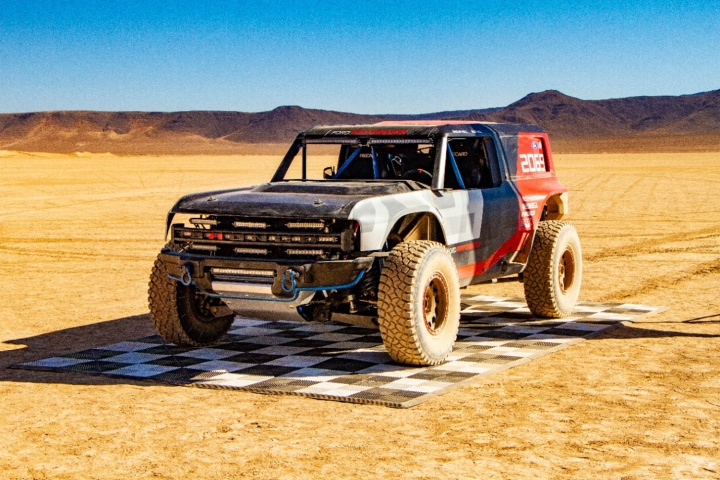 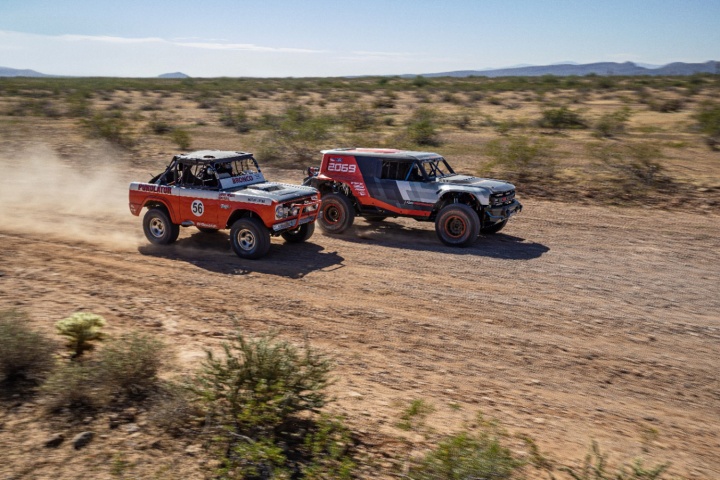 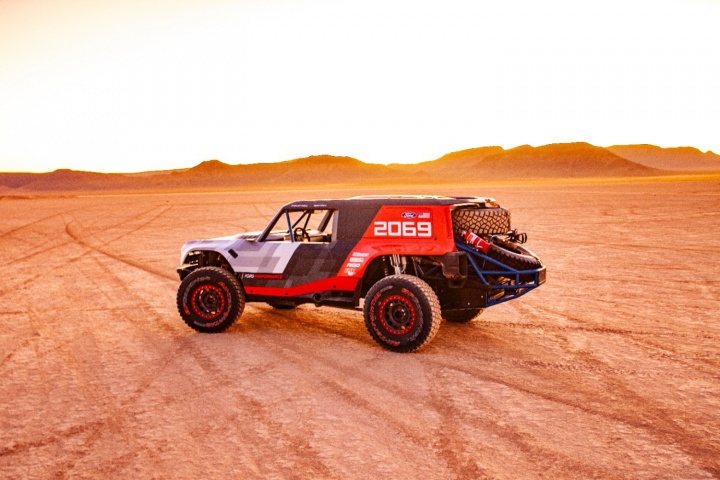 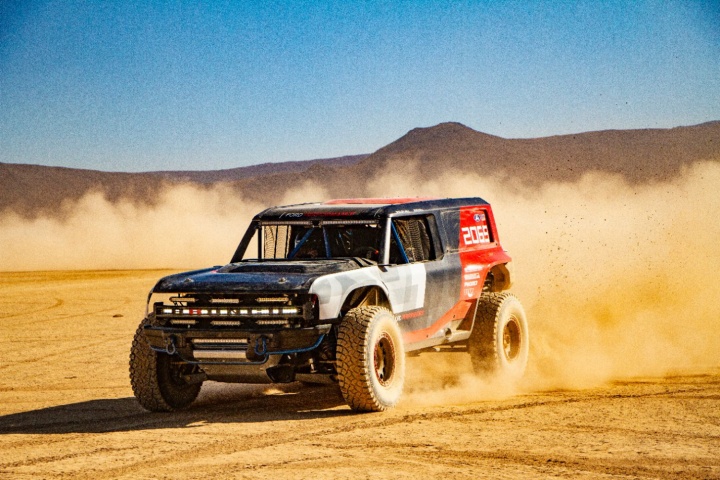 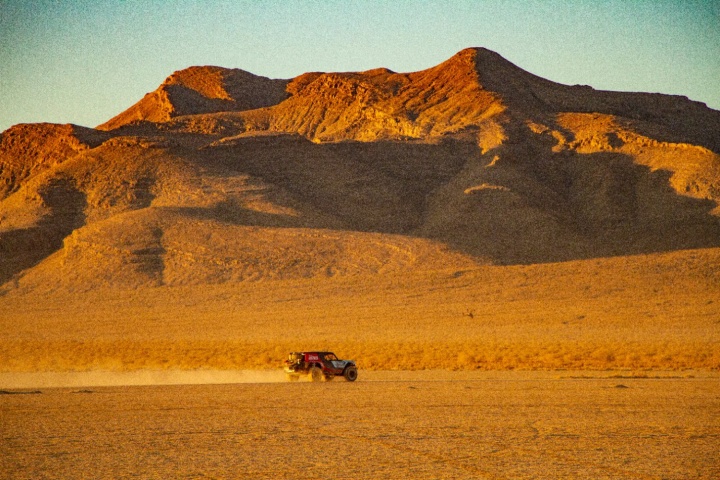 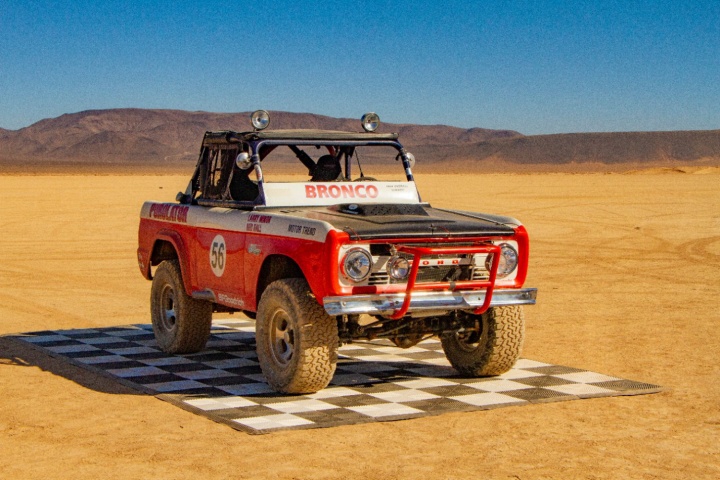 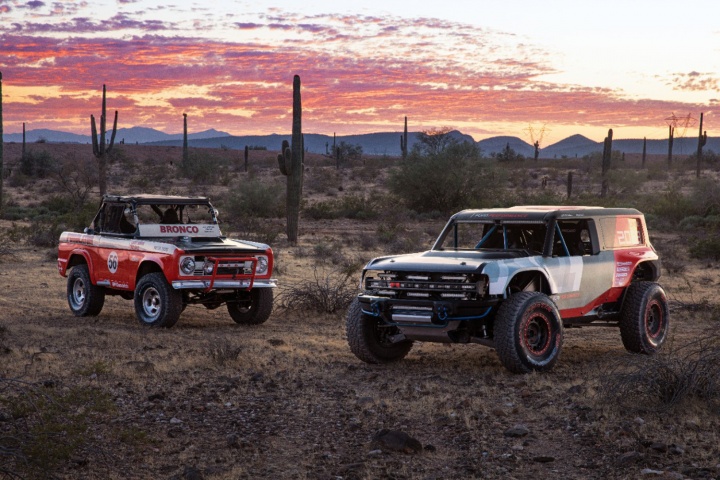 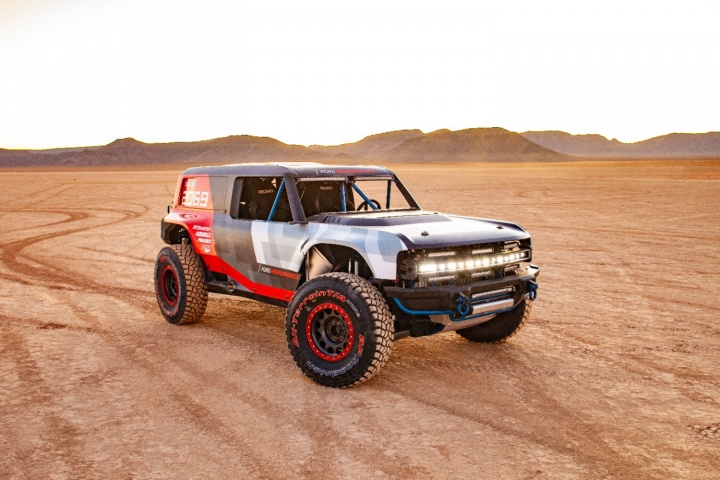 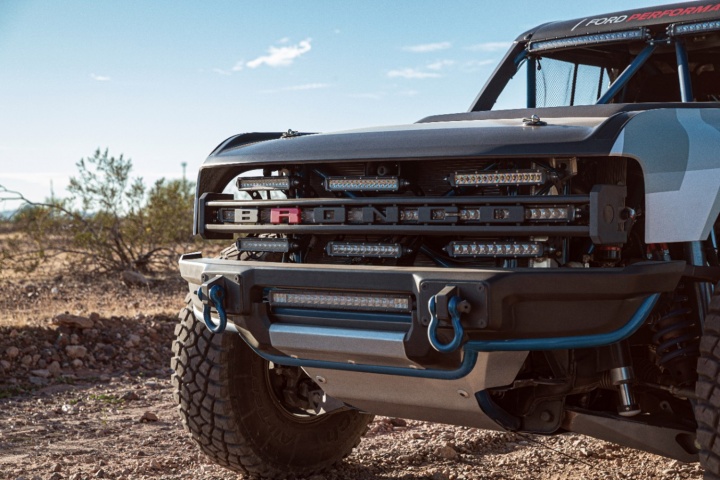 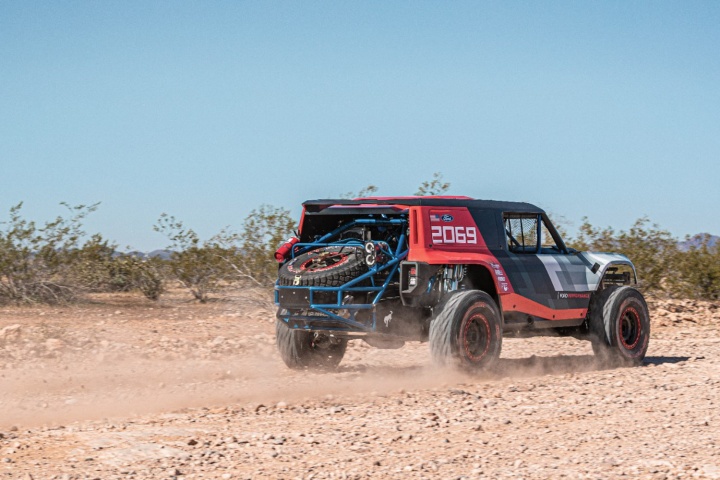 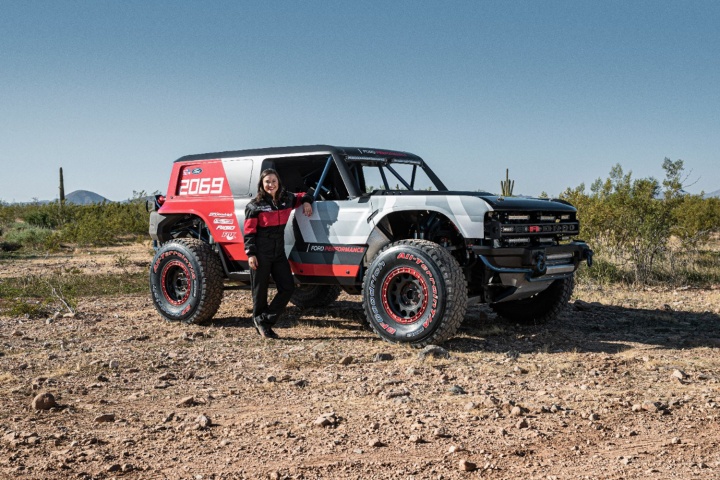 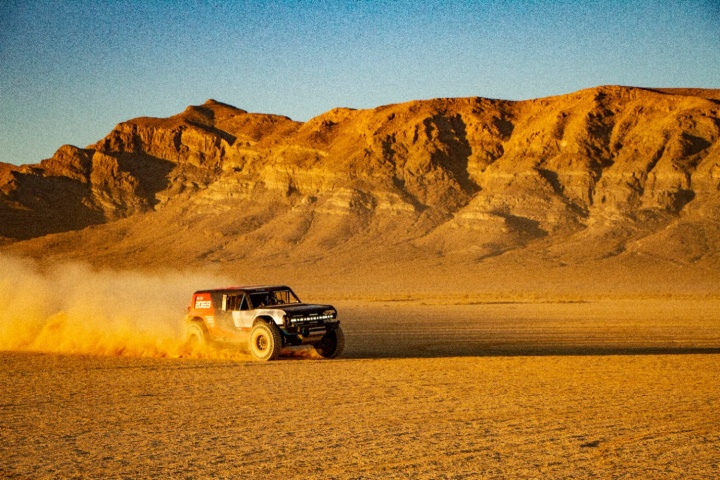 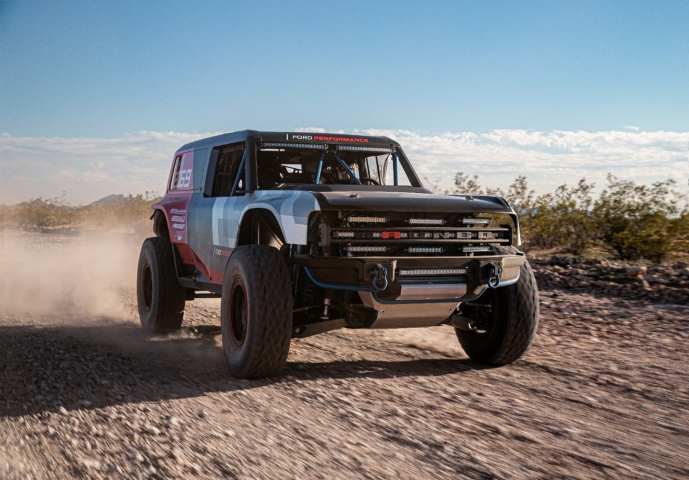 Ford is getting ready to reveal its all-new Bronco. It's a big deal for the Blue Oval - the compact 4x4 is one of its most iconic models, at least to US customers. Here, it's less of a big deal but the new Bronco might well make it to European and Irish shores so maybe we'd better pay attention.

The original Bronco made its name by winning, in lightly modified production form, the gruelling Baja 1000 off-road rally in 1969 (think Paris-Dakar, but more Mexican). 50 year on, Ford has previewed the new Bronco with this R racing version, effectively a prototype wearing body panels designed to mimic the Bronco that Rod Hall and Larry Minor famously drove to an overall win 50 years ago. The Bronco R will return to Baja this year, and in doing so passes the torch to off-road racer Shelby Hall, Rod's granddaughter, who will drive it for portions of this year's prestigious race in honour of her late grandfather.

The R's vestigial body panels are designed to mimic the look of the new Bronco production car, which will be revealed next Spring. The R has been developed by Ford Performance in collaboration with builder Geiser Bros Design and Development and Baja 1000 Trophy Truck champion Cameron Steele.

The team has been working since July, tucked away in a shed in the Ford design studio, to create the R. It gets some very un-racery exterior touches, including LED light bars that mimic the shape of the original Bronco grille, and washers embossed with the Bronco logo scattered around. The flat, clamshell bonnet and low-slung glasshouse are also pure original Bronco. It's not quite as bare-bones simple as that original Bronco racer though - the body panels are made of composite material, and there's a MoTec data logging system built into the skeletal dashboard.

Although based on a production pickup platform, the Bronco R gets some serious racing add-ons, including suspension with more than 350mm travel at the front, and 450mm at the rear. As well as custom Fox shock absorbers (like the ones used on the Ranger Raptor) there are 17-inch wheels shod with 37-inch sand-grabbing BF Goodrich tyres.

"Like the original Bronco, we kept Bronco R's design authentic and simple, with a roll cage on a production-style frame, and a five-piece lightweight body on top," said Brian Novak, Ford Performance off-road racing supervisor. "For the endurance needs of Baja's 1,000 grueling miles, we built in a limited number of race-focused parts. But even the twin turbos of the EcoBoost engine are representative of what the production Bronco will offer."

"Bronco's win at Baja in 1969 was epic, something that even after 50 years has not been repeated," said Hau Thai-Tang, Ford chief product development and purchasing officer. "Rugged endurance racing is such a big part of Bronco heritage. The Baja 1000 gives us not only the perfect setting to honor Rod Hall's win, it also provides an authentic test bed to demonstrate our upcoming Bronco's desert racing capability and durability."

"My grandfather was so proud of the 1969 Baja race and of his Bronco," said Shelby Hall. "More than just the memory of winning Baja, he loved that Bronco. I have no doubt he would be blown away by the Bronco R race prototype."