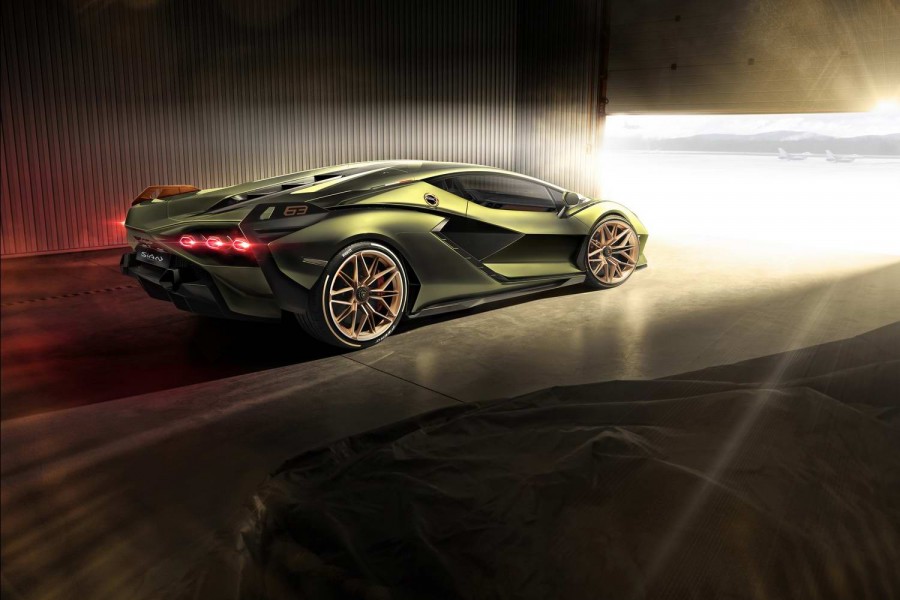 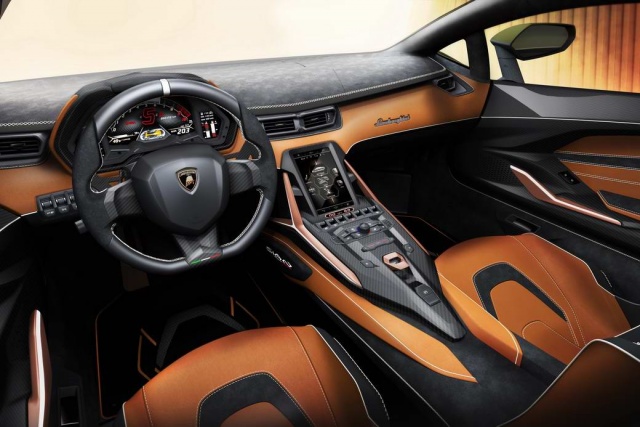 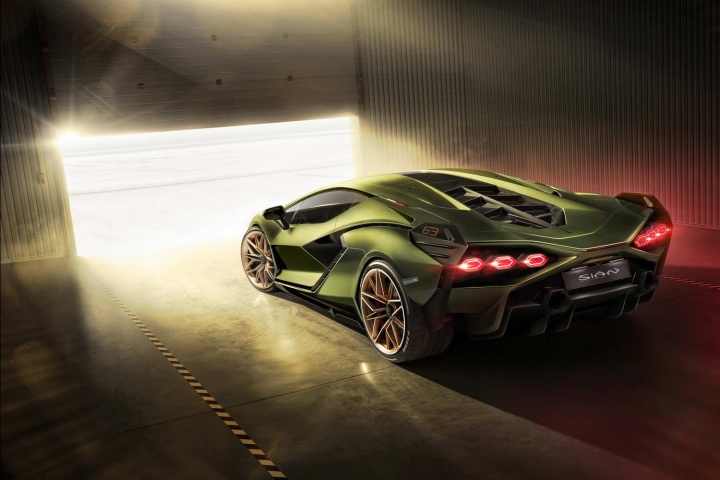 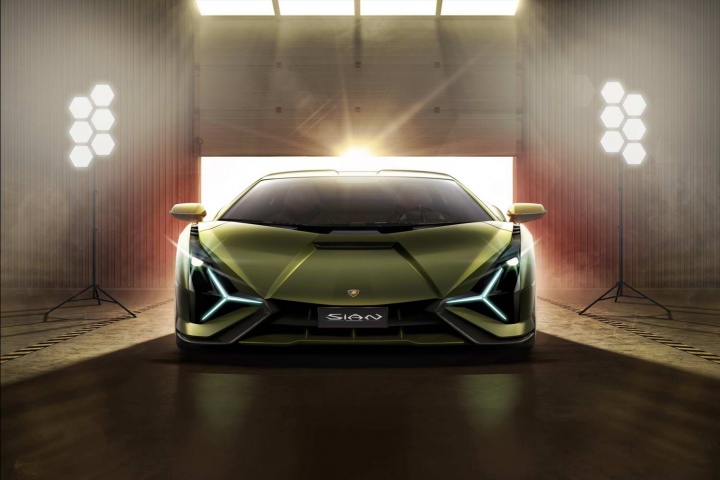 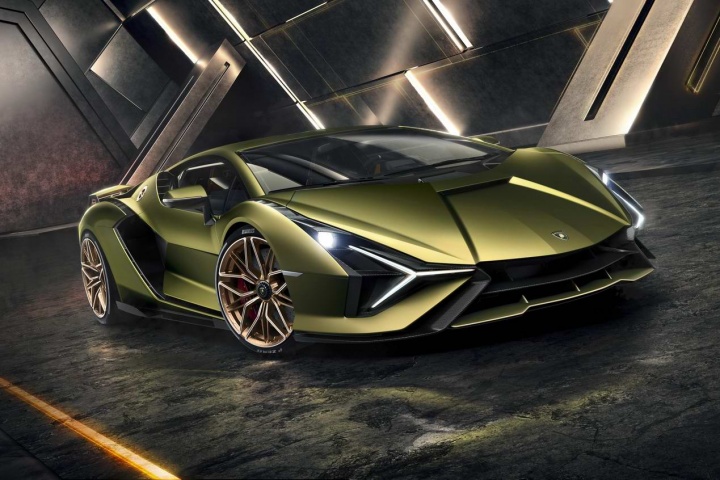 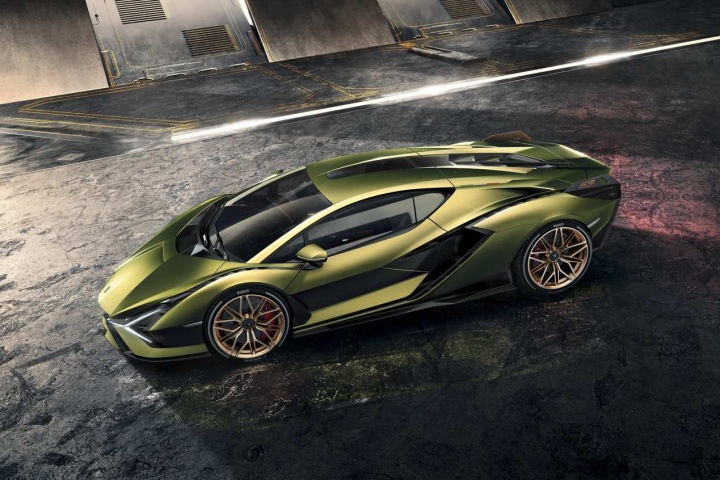 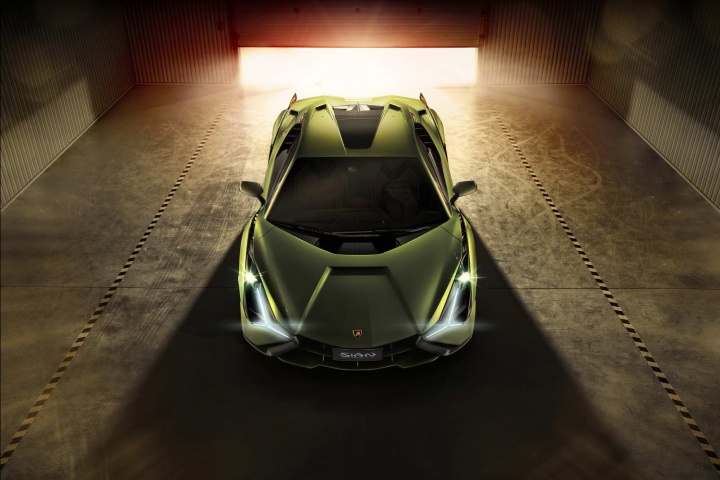 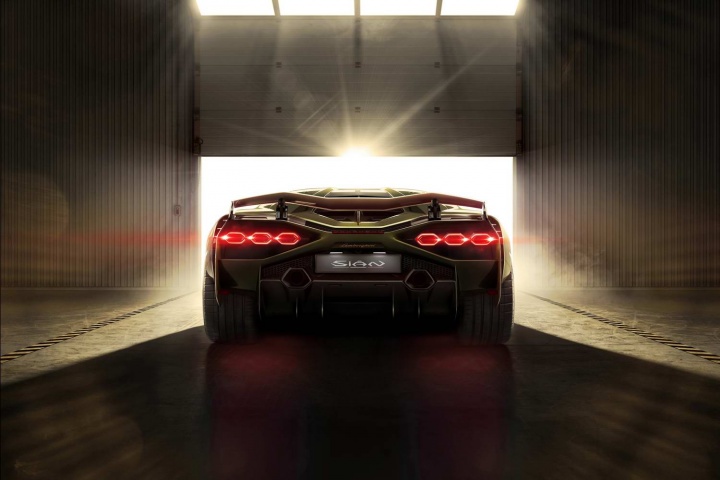 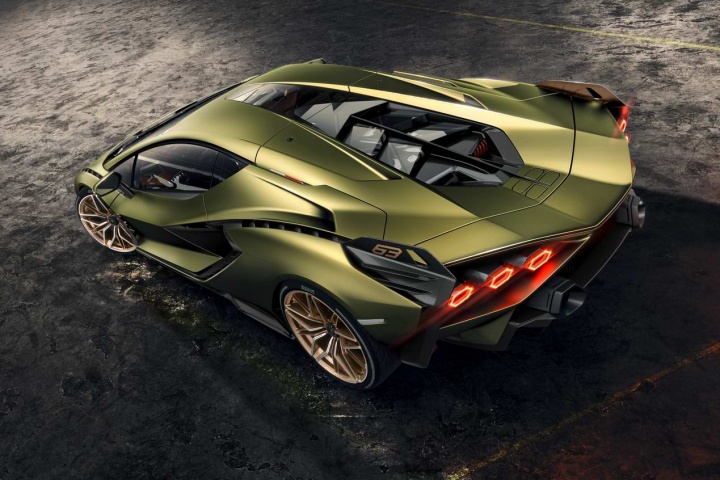 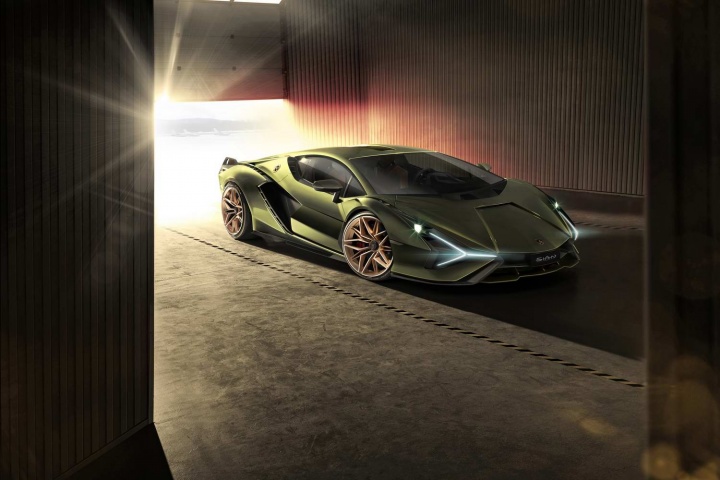 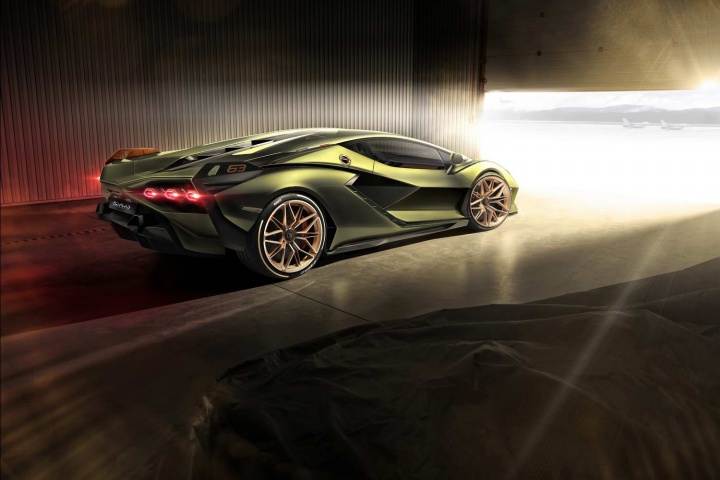 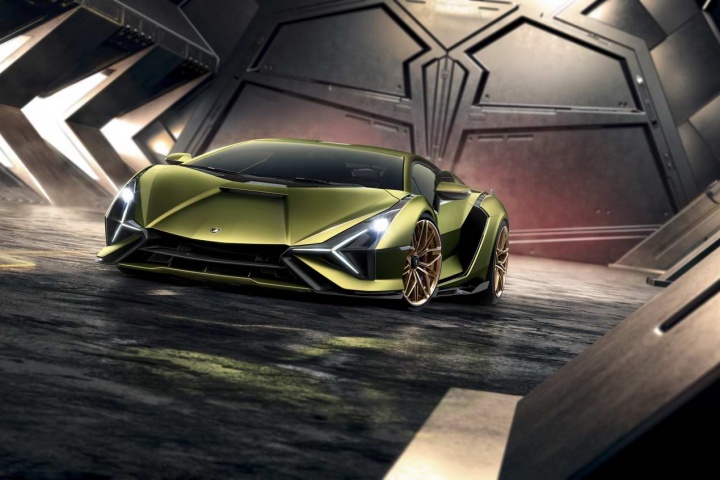 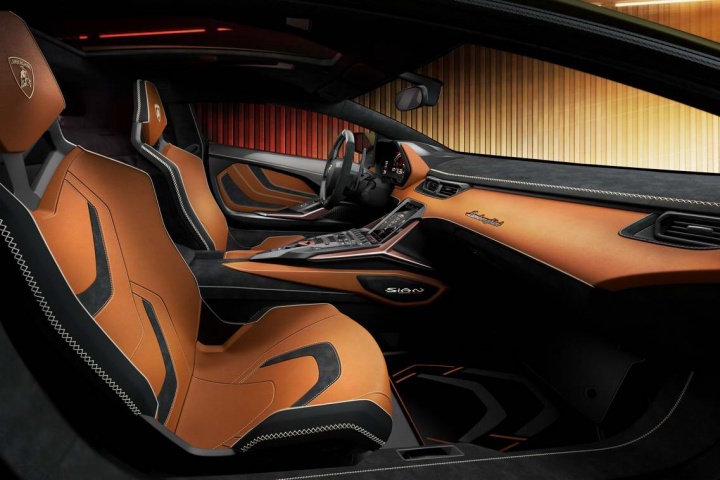 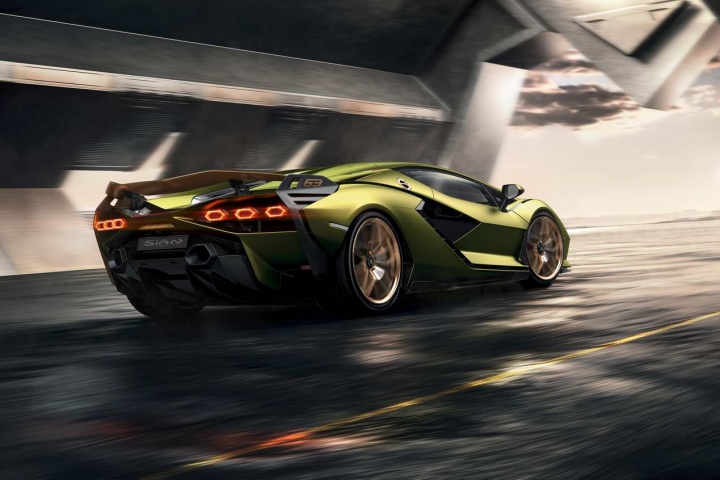 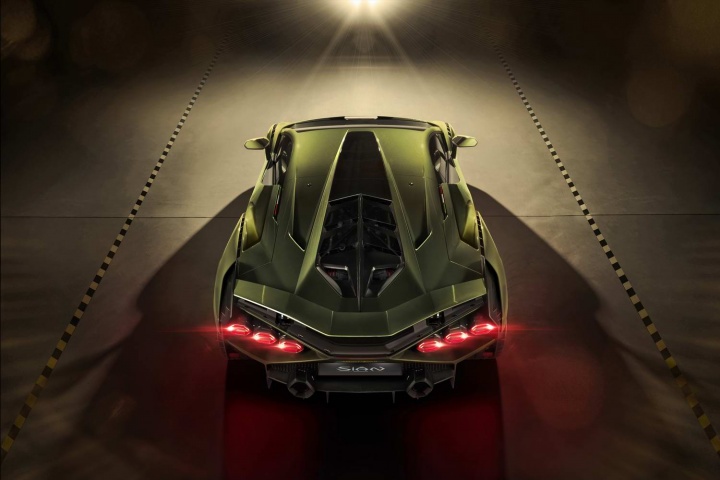 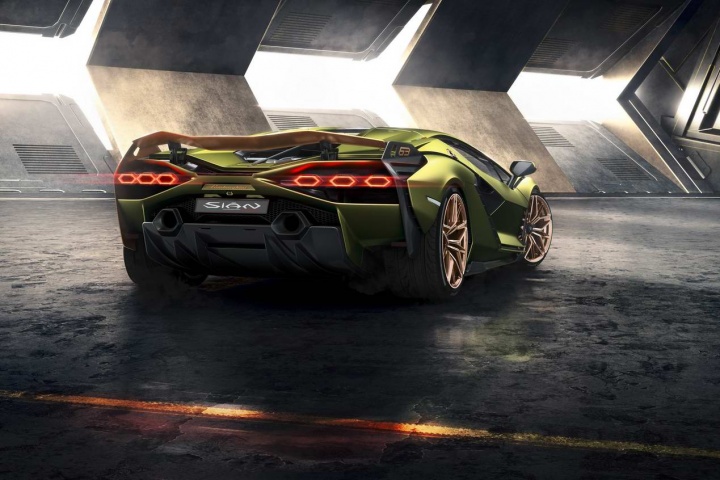 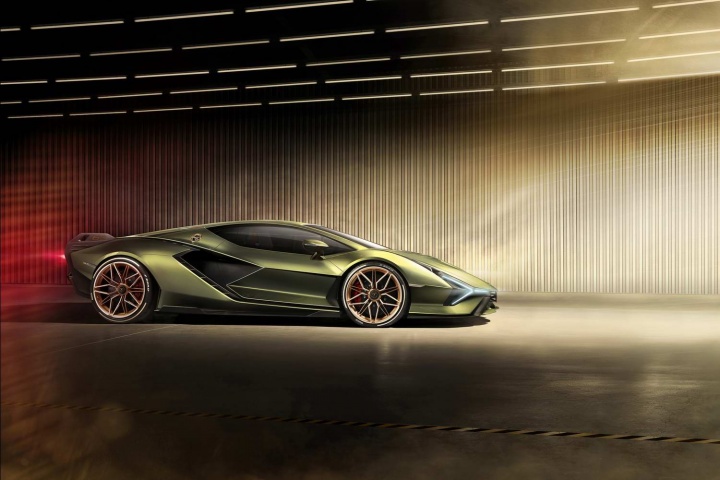 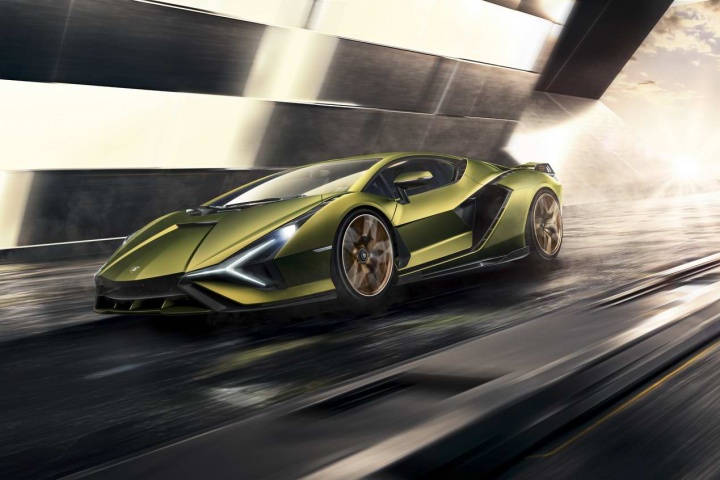 Lamborghini has finally done what it's been threatening to do for some time - go hybrid with its mighty 6.5-litre V12 engine. This is the Sián, a mid-engined hypercar that takes the basics of the current Aventador and updates them for a new, half-electric, life.

The hybrid system pumps out a massive 819hp, 34hp of which comes from a compact electric motor powered by a 48-volt mild-hybrid system. That motor doesn't use batteries - instead, it uses fast-charging super-capacitors, which draw energy from braking and coasting. The downside to super-capacitors is that they don't store energy for as long as conventional batteries, but the upside is that they're light. The combined motor and super-capacitors weigh just 34kg. Lamborghini says that they're three times more powerful than a battery of the same weight and three times lighter than a battery producing the same power. Lambo says that this is a 'world's first' but to be fair, Mazda used to use similar super-capacitors on the 6 saloon...

Because the super-capacitors can be fully charged up every time the Sián brakes, they're used for short bursts of extra power, rather than the fuel-saving zero-emissions running of a conventional hybrid. Actually, the electric motor disconnects above speeds of 130km/h, but the more exciting figure is that the Sián can hit 100km/h from rest in just 2.8 seconds, and roll on to a top speed of more than 350km/h. It's reckoned to be some ten per cent faster than it could have been with just the regular V12 engine. Hurrah for hybrids!

The electric motor can also 'torque-infill', which means that it can provide a little burst of power as the Sián is changing gear, so that shifts become almost totally seamless, and there's no (or at least very little) let up in acceleration during upshifts.

On the outside, while the Sián is a clear evolution of the Aventador, it's also the first sign of where Lamborghini design will head in the future. It does that by looking back to the past - Lambo openly says that it has turned to Marcello Gandini's legendary pair of Countach and Diablo for inspiration.

The colour is also pretty amazing. Called Oro Electrum (electric gold), it incorporates little flecks of metallic gold (not real gold, sadly) and is meant to be both retro and futuristic at the same time. The interior is Terra di Sant'Agata Bolognese with leather from fashion house Poltrona Frau, which incorporates some 3D-printed elements.

"The fastest Lamborghini must be a visual and symphonic feast, as remarkable to those who see it pass by as those privileged to drive it, "says Mitja Borkert, Head of Design at Automobili Lamborghini. "It takes inspiration from the Countach, but the Sián is a futuristic icon, not retrospective. Exclusivity is enhanced by total Ad Personam personalization that every one of the 63 Sián owners has the privilege of creating, in conjunction with me and the Centro Stile team: 63 individuals worldwide will own not only the fastest, but a unique Lamborghini."

Yup, that's right, only 63 of these will be built (Lamborghini first started making cars in 1963, you see...), and they're already all sold out. "The Sián is a masterpiece in possibilities," says Stefano Domenicali, Automobili Lamborghini Chairman and Chief Executive Officer. "Not only does the Sián deliver a formidable hyper-car design and engineering tour de force today, it augments the potential for Lamborghini as a super sports car brand for tomorrow and for decades to come, even as hybridisation becomes more desirable and inevitably essential. The Lamborghini Sián represents the first step in Lamborghini's route to electrification, and expedites our next-generation V12 engine. Its Sián moniker, meaning 'flash or lightning' in Bolognese dialect, denotes the first electrification of a Lamborghini production car and confirms our strong connection to the territory in which we operate. With the Sián, Automobili Lamborghini demonstrates its dynastic strength as a legendary super sports car brand for the future."

"Lamborghini's strategic heritage in one-off and very limited series cars is not only a commitment to exclusivity but a presentation of future designs and technologies. With this car, we set ourselves the challenge of creating the best hybrid solution for a Lamborghini super sports car to provide us with the first step on our electrification strategy," says Maurizio Reggiani, Chief Technical Officer. "Lamborghini is inherently a rule breaker, a challenger, always pushing what is possible to find a better solution. With the Sián we are defining our route to innovation and we are setting new rules in new technologies, instead of just following existing solutions. The result is the Lamborghini Sián, which includes the world-first application of a supercapacitor for hybridization and new materials technology."