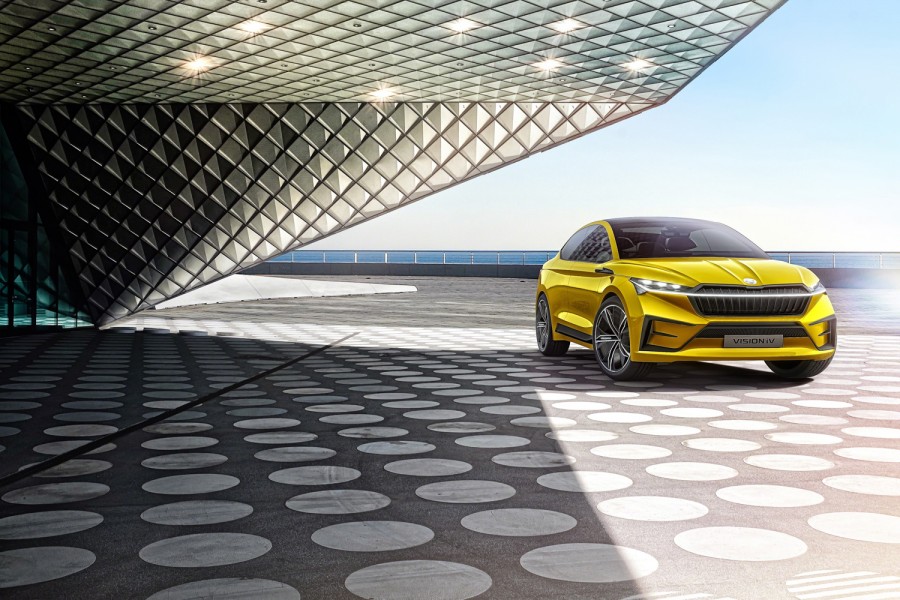 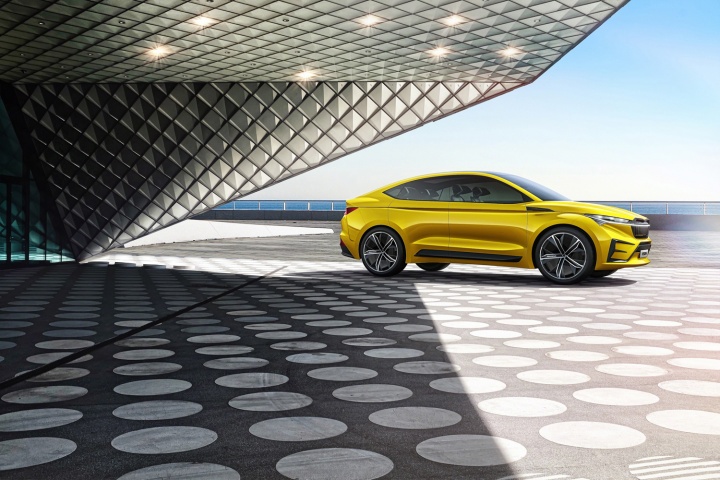 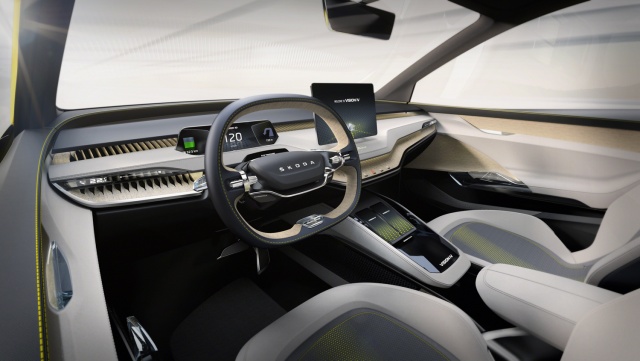 Skoda’s Vision IV is a ‘concrete’ vision of the future

It may be only a concept car for now, but Skoda claims that its big (in every sense) Vision IV is a "concrete preview of the models in Skoda's future electric range." It's a big (4.6-metre long) SUV-coupe concept, that uses the same MEB electrical architecture as VW's ID. Buggy Concept and SEAT's El-Born electric hatchback.

Gleaming in its 'Ultra Yellow' paint job, the Vision IV looks as if Skoda has designs on competing with BMW's X6 SUV. It probably really doesn't, but it does show that the Czech brand's styling is about to become more aggressive. Check out the ultra-slim LED headlights, the big grille, and that distinctive LED light bar that runs across the nose of the car and connects the headlights.

Around the back, there's a neat touch - the word Skoda, spelled out on the bootlid in place of a traditional Skoda badge, lights up in red. At the front, the headlights have been designed to represent jewels or traditional Czech crystal work. The door mirrors have been replaced by rear-facing cameras, as on Audi's e-tron quattro, while there are no handles on the doors - they pop open when you touch them, having been unlocked by using a smartphone as a digital key.

Oliver Stefani, Skoda's chief designer, explained: "The minimalist design, also highlighted by the use of cameras instead of wing mirrors or by the lack of door handles, symbolises how easy our electric cars are to use. What's more, illuminated design features and new light technology add exciting visual touches."

Inside, the cabin is very stripped-back in its style, with two floating digital screens and two built-in touchscreen remote controls, which look after infotainment, instrumentation, and ventilation. This being a Skoda, it's very practical with lots of storage areas and cubby holes. All of the interior materials have been designed to be eco-friendly - there's both Ultrasuede and Dinamica for the dash and seats, some of which is made from recycled PET bottles, while the seat backrests boast covers made from vegan vinyl fibres.

There's another neat touch - traditional air vents are replaced by distinctive birch wood slats which can direct airflow around the cabin. When it comes to infotainment, the Vision IV automatically connects its occupants' smartphones to the in-car system, and there's built-in 5G connectivity to allow you to connect to services from Skoda and third parties.

On the safety front, it's been designed to be Level 3 autonomous, able to take control of driving for much of the time, as long as the driver remains alert to monitor the situation. There are laser scanners, radar, and cameras to watch the road ahead, and even a heart-beat monitor to keep an eye on the driver's health.

Underneath, there's an 83kWh battery powering two electric motors (the Vision IV is four-wheel drive, of course) which provide 306hp. 0-100km/h takes just 5.9 seconds, 80-120km/h takes just 4 seconds; and Skoda claims a 500km one-charge range for the battery. If you can find a rapid charger with suitable power output, it can be 80 per cent charged in just 30 minutes.

Christian Strube, Skoda Board Member for Technical Development, said: "One characteristic of electric motors is that maximum torque is available straight away. This provides excellent responsiveness and when accelerating, this concept car achieves more dynamism than we've ever seen from a Skoda. And to top it all off, it produces zero emissions, runs quietly and offers perfect traction."