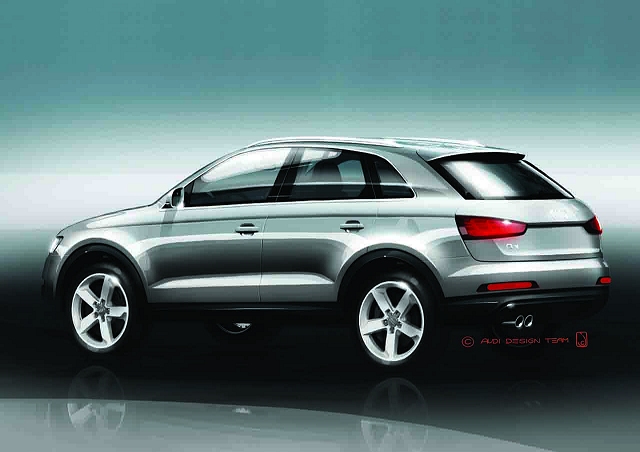 Audi has released a few sketches of its forthcoming Q3 crossover, ahead of a debut in China.

The production-ready Audi Q3 will break cover at the Shanghai Motor Show that runs from 21-28 April.

Based on the Volkswagen Tiguan platform, the Q3 is set to go on sale towards the end of 2011. Its styling is related to the Cross Coupé concept Audi displayed at the Shanghai show in 2007, which received a very keen welcome.

The Audi Q3 could be a direct rival to the MINI Countryman and BMW X1. Engines for the Q3 will be drawn from the Tiguan line-up, so will include a 140hp 1.4, 180hp 1.8 and 210hp 2.0-litre, all petrol. There will also be turbodiesels with 140- and 170hp, with a 210hp turbodiesel also thought to be in development for launch at a later date. Most Irish cars are likely to be diesel-powered.

Production of the Audi Q3 will take place at SEAT's factory near Barcelona, strengthening rumours the Spanish firm will build its own version of the Q3 based on the styling of its IBX concept from the recent Geneva Motor Show.