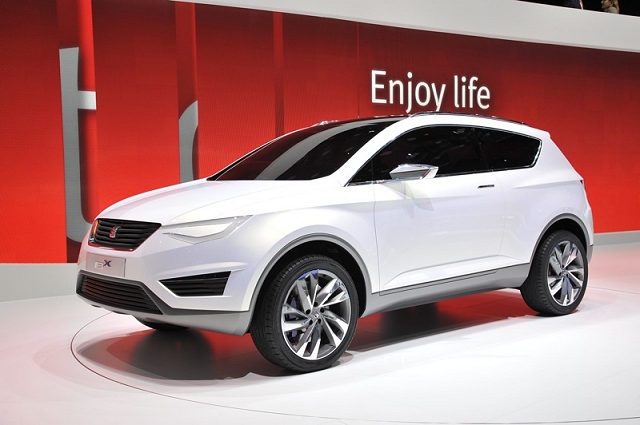 The IBX concept car in Geneva previews how a new SEAT crossover could look.

It's a re-bodied SEAT Altea, is what it is, but it's also the most significant concept SEAT has done for some time. Everyone's into their sporty crossovers right now - they're the new people carriers - yet SEAT has spent the last couple of years knocking out actual people carriers and last generation saloons. The IBX will give the brand something big, stylish, on-trend and desirable - perfect for the yoof of today.

We've sort of explained that already, so let's talk about what it is. The IBX is, oddly, a three-door crossover in its present form, though a SEAT person told us that if it gets the nod (which it probably will), it'll be sold as a five-door first. A three-door variant isn't out of the question, though. It's likely to be built on the VW Tiguan platform and, as ever, use the full range of common rail TDI diesel and TSI petrol engines. The show car, though, has an unspecified hybrid setup that SEAT promises will emit less than 70g/km of CO2.

It does look lovely, and the closer you get to it, the clearer the sparkles of its metallic white paintjob become. SEAT is genuinely monitoring interest in this car to see if it should take the plunge. There are more exciting concept cars in Geneva, but we'd like to see the IBX built - and looking as close to this as possible.