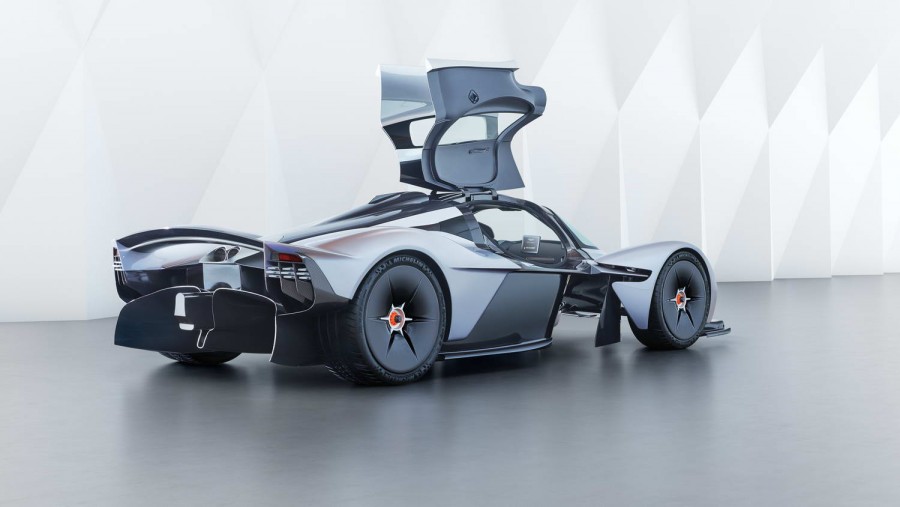 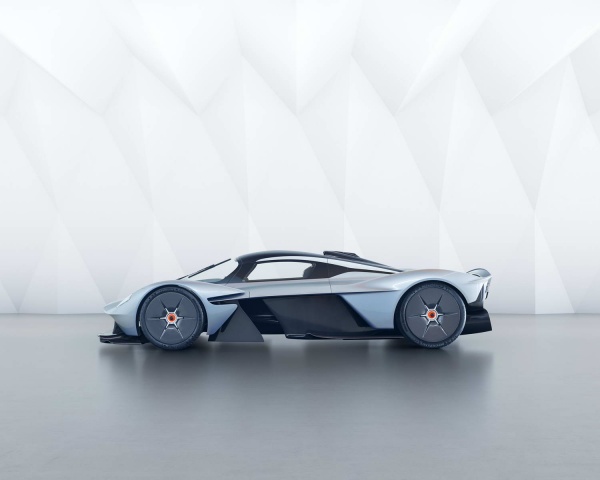 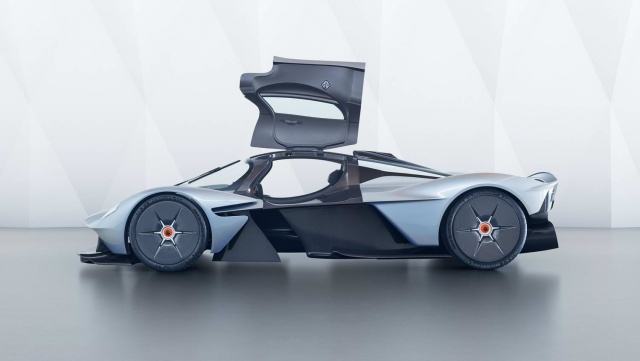 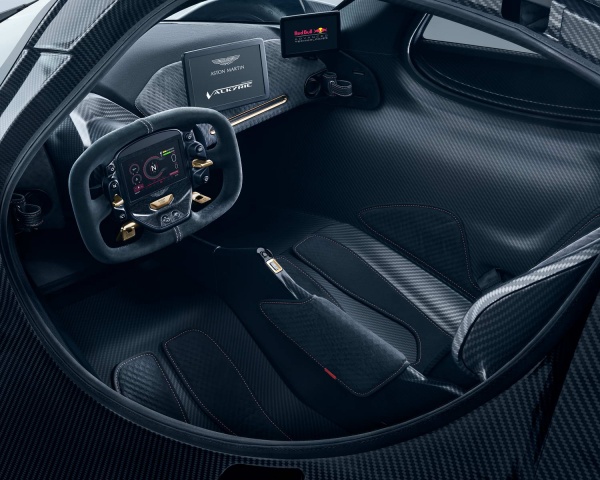 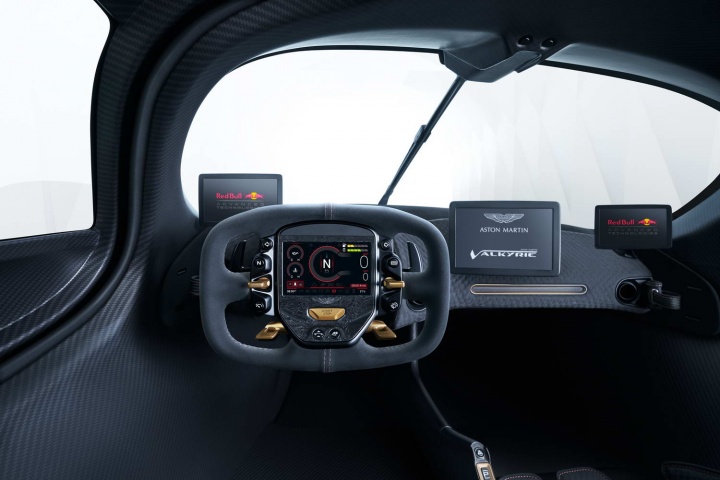 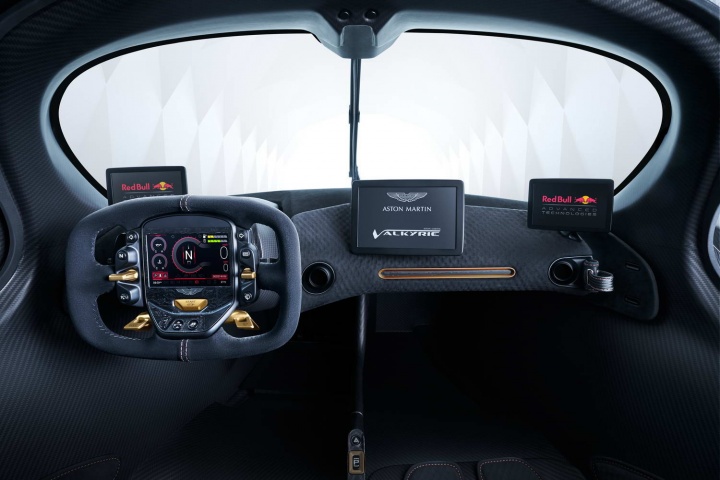 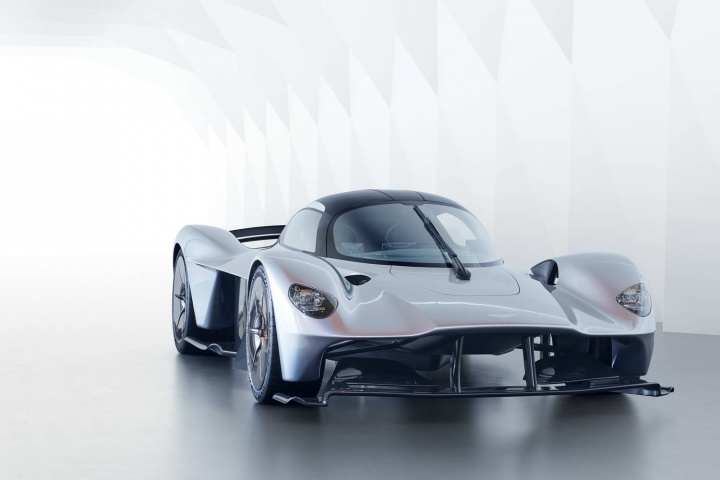 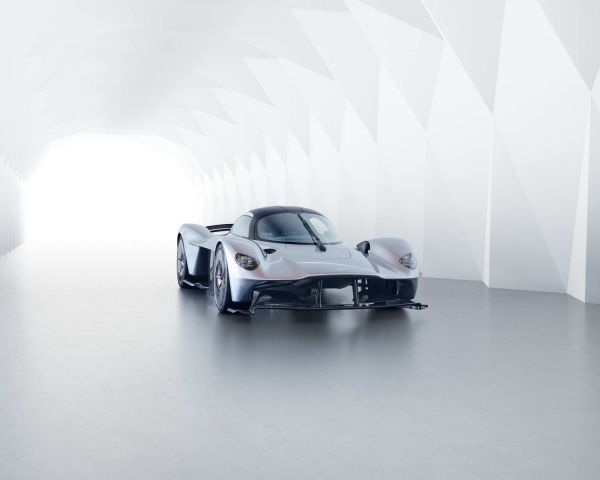 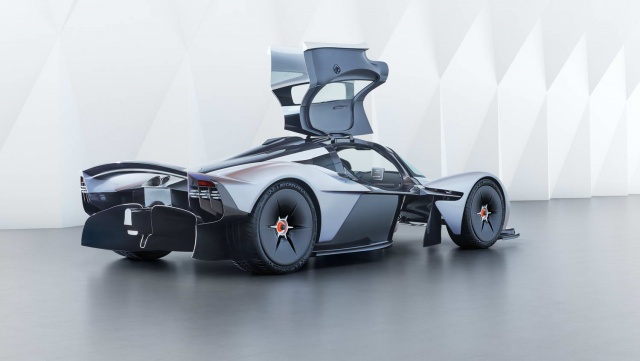 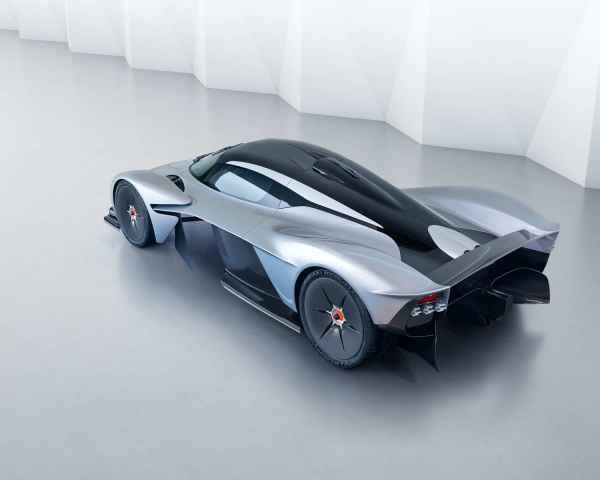 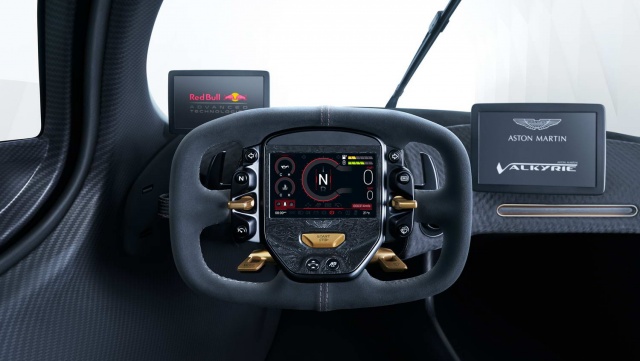 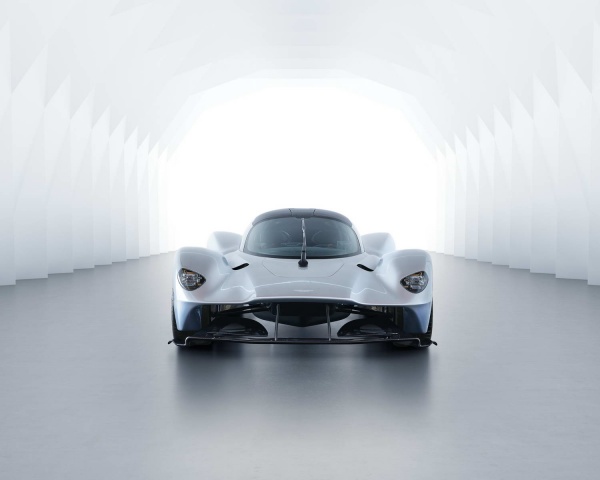 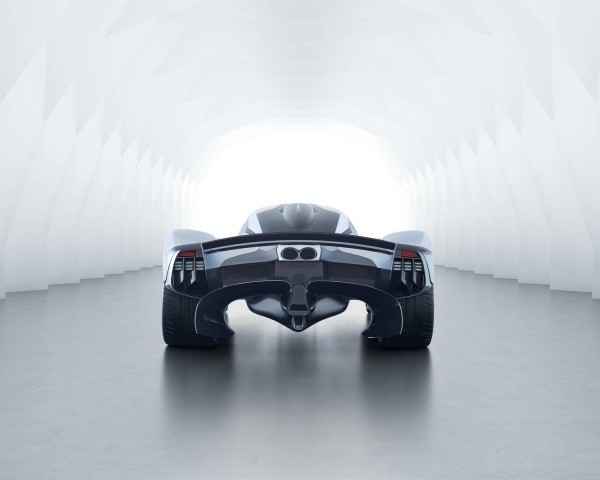 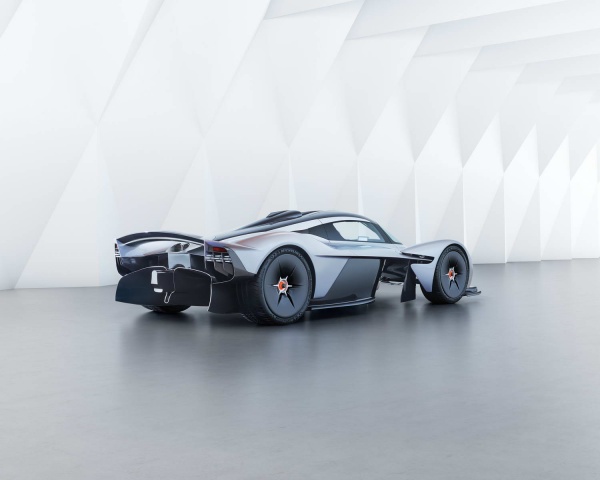 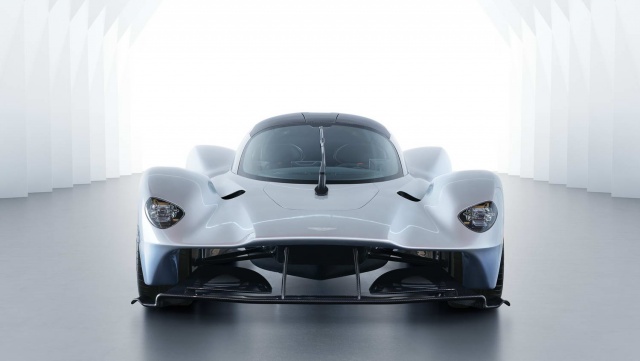 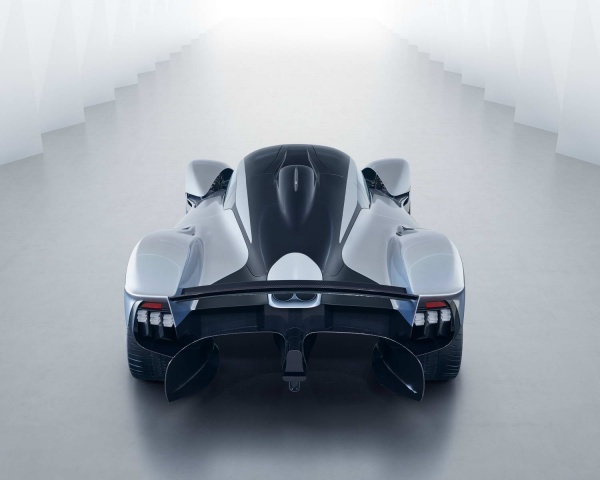 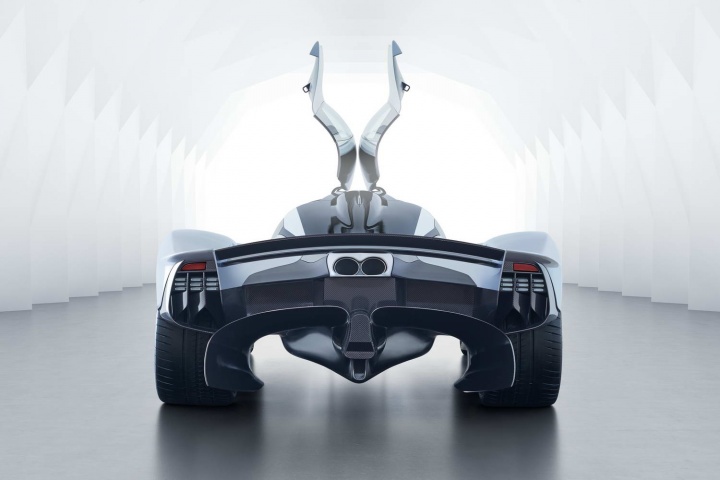 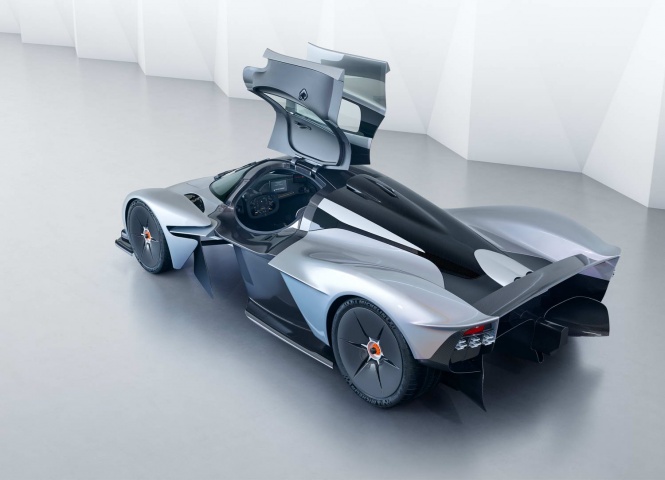 Aston Martin reveals a lot more of its Valkyrie supercar in these images.

Back in March, Aston Martin confirmed that a new hypercar under development in conjunction with Red Bull Advanced Technologies (under the guidance of the engineering genius that is Adrian Newey) would be called the Valkyrie, and that just 175 would be built. A styling model was shown at the time. But Mr Newey's pursuit of aerodynamic perfection (and much hyped up levels of downforce) has led to significant design changes, so Aston has now revealed a car that is much closer to how the finished article will look. Along with that we've been given images of the Valkyrie's minimalist cabin.

The exterior design is defined by two huge full length Venturi tunnels that feed air to the simply massive rear diffuser. That's why there appears to be very little bodywork, suspended above the road. One of the biggest differences between this iteration of the Valkyrie's design and the original model is to the area between the front wheelarches and the glasshouse. Newey discovered that considerable downforce gains could be found by using gaps in this space and the Aston design team restyled it to suit. Aston Martin Creative Director of Exterior Design, Miles Nurnberger, said: "I would say we're around 95 per cent of the way there with the exterior design. Much of what you see is actually the structure of the car, so this had to be signed-off relatively early in the project. The remaining areas of non-structural bodywork are still subject to evolution and change as Adrian continues to explore way of finding more downforce. The new outlets in the body are a case in point. Ordinarily the last thing we'd want to do to one of our surfaces is cut a hole in it, but these vents work the front wings so much harder that they've found a significant gain in front downforce. The fact that they are so effective gives them their own functional beauty, but we've finessed them without impacting on their functionality. That they also serve as windows through which to view the fabulous wing section front wishbones is a welcome bonus!"

F1-like obsession can be found throughout, with features like the world's smallest centre high-mounted brake light, which is just 5.5mm wide and 9.5mm high; or the chemical etched aluminium Aston Martin 'wings' badge, which is only 70 microns thick (that's thinner than a human hair); or the gorgeous tiny headlights that are over 30 per cent lighter than the lightest lamps Aston could normally use in series production.

Low weight and minimal design also defines the Valkyrie's interior. It's a two-seat affair, with the seats moulded into the carbon tub and the occupants sitting in a reclined manner. All switchgear is contained on a tiny oblong - and detachable - steering wheel, which even features an OLED display screen. Take a look through the pictures and you'll see another pair of screens, one mounted either side of the minimal dashboard. Those display images from tiny cameras mounted in the back of the car, replacing conventional door mirrors - and indeed the rear-view mirror, as there is no rear window. Buyers choose between standard four-point harnesses, or more track-oriented six-point items.

Aston didn't say anything more about the Valkyrie's engine, which is known to be a Cosworth-built 6.5-litre V12, mounted to a seven-speed paddle-shift transmission.

Matt Hill, Aston Martin Creative Director of Interiors, said of the Aston Martin Valkyrie's cockpit design: "It's been a tremendous challenge to make the interior packaging work. We've embraced Red Bull Racing's Formula One ethos and approached from a different angle than conventional road car design. In this instance, we've started from a position where you think something is impossible and work at it until you find a way to make it work. We've been fighting for millimetres everywhere, but the battle has been worth it, as it's been fantastic seeing customers try the interior buck for size. They love the ritual of getting in and how it feels to be sat behind the wheel. They're also genuinely surprised at how the car just seems to swallow them. You really do have to sit in it to believe there is genuine space for two large adults."