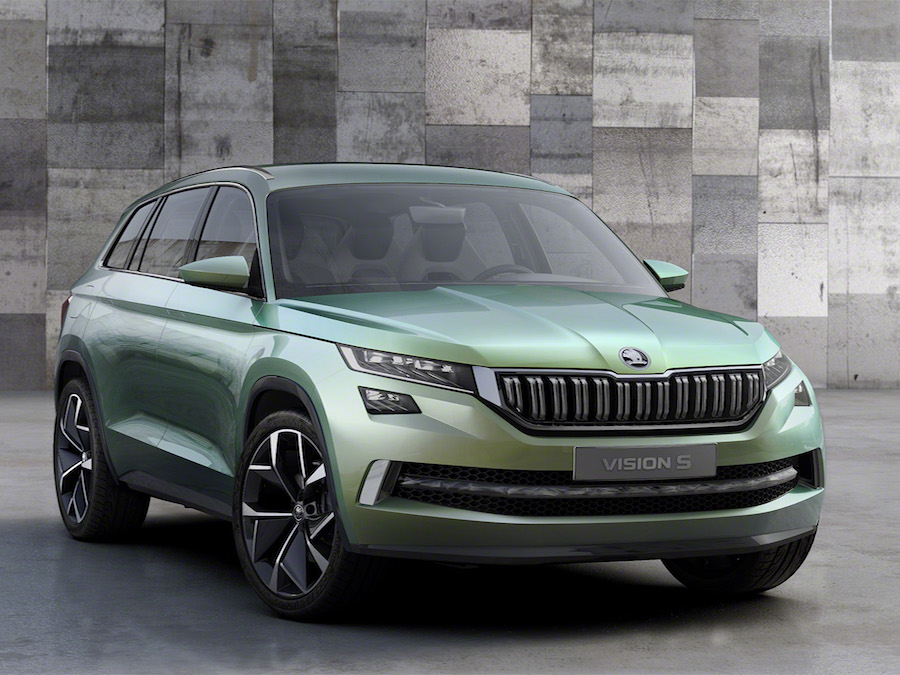 Want to know what Skoda's inevitable, forthcoming SUVs will look like? Then here's your answer. Like the VisionC concept shown at Geneva Motor Show two years ago - which morphed into the current Superb - this is the Czech firm's VisionS and it's going to the Swiss showpiece at the start of March.

The 4,700mm-long VisionS is based on the MQB platform and has a 2,790mm wheelbase, while it's 1,910mm wide and 1,680mm tall. That makes it fairly sizeable, although it looks decent enough thanks to Skoda's trademark sharp styling. It's finished in Island Green; in case you're wondering about the colour.

Inside, six seats are spread across three rows (meaning the production version will be a seven-seater with a conventional second-row 'bench') and Skoda says the VisionS is packed with 'automotive digital networking services' which are shown via large display screens.

The VisionS is also a hybrid, with a 1.4-litre TSI petrol coupled up to a pair of electric motors. The TSI kicks out 156hp and 250Nm, while an e-motor integrated into the six-speed DSG transmission provides another 40kW (54hp) and 220Nm, which it directs at the front wheels. At the rear is a stronger electric unit, capable of 85kW (116hp) and 270Nm, that drives the back axle - so when the VisionS is running in four-wheel drive mode, it's all intelligently controlled by on-board computers; there's no propshaft running underneath the car to physically connect all the wheels.

With a lithium-ion 12.4kWh battery mounted ahead of the rear axle, Skoda claims the maximum combined 225hp drivetrain will propel the VisionS from 0-100kmh in 7.4 seconds, with a top speed just shy of 200km/h. It has a 50km electric range, can go up to 1,000km on its hybrid systems and emits just 45g/km CO2 while achieving 1.9 litres/100km (148.7mpg). So expect the production versions to be fitted with boring old diesel units instead...

Alongside the VisionS at Geneva will be the Octavia RS 4x4, a natural gas-powered Octavia called the G-TEC and a mildly ruggedised version of the Fabia Combi, called the ScoutLine.