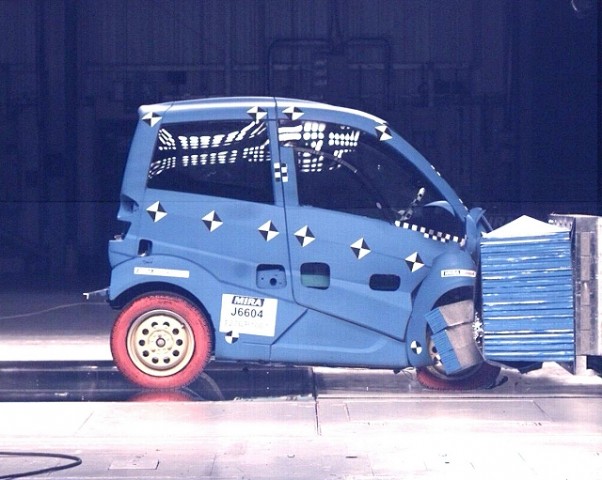 The latent saviour of the automotive industry, the T.27 city car, appears to be fulfilling the promise bestowed upon it by its eminent creator, Gordon Murray (spoken or otherwise).

That's because it has come through its first proper crash test relatively unscathed. The Motor Industry Research Foundation (MIRA) put the T.27 through the mandatory 40 percent offset deformable barrier front high-speed impact test and, in a nutshell (an apt turn of phrase in this case) it did very well indeed. There was zero cabin intrusion.

The reason this non-breakthrough is a breakthrough is that Murray's manufacturing process, called iStream, makes the T.27 very cheap to produce while making it safer. The secretive process produces a composite monocoque chassis for the T.27 with its roots in Formula One engineering, and with very high specific energy absorption capabilities.

It bodes well for the official Euro NCAP crash test for the innovative three-seat car, which follows the layout of the McLaren F1 in having two rear occupants straddling the centrally positioned driver. Its makers are likely to be expecting the full five-star rating.

The electric powered T.27 will begin on-road testing in spring this year before going on sale in 2012. Irish market sales have yet to be confirmed.