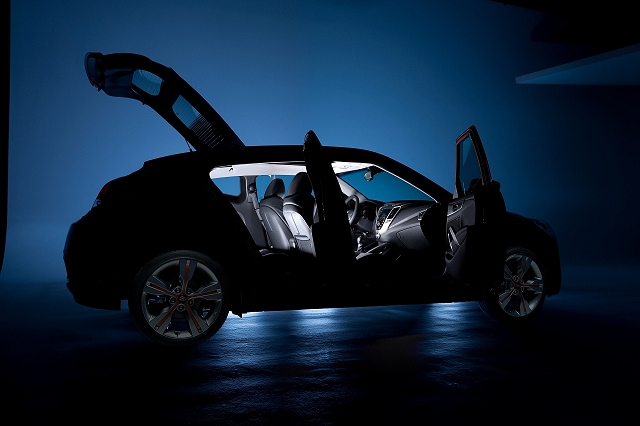 Here's the first teaser shot of a new Hyundai coupé called the Veloster.

This solitary, doors-open shot is all we have of the new Hyundai Veloster, due to be revealed in full at the Detroit Motor Show on 10 January.

With the picture is an announcement from the Korean company that reads: 'Hyundai will introduce its cutting-edge 2012 Veloster in a world debut at the North American International Auto Show on January, 10 at 2:55 ET.'

From this angle it looks like a family hatch, but that's not the case; the Veloster is actually the replacement for the Hyundai Coupé.  And if the Korean company had cared to shoot the image from another angle you'd see only one door on the driver's side, making this a strange coupé-hatchback hybrid.

You may remember that all the way back in 2007 Hyundai debuted the Veloster concept at the Seoul Motor Show. The silhouette in this picture looks pleasingly similar to that car's.

Like the Coupé before it, the Veloster will be pitched at the budget sportscar market, cheaper than the VW Scirocco but vying for the same sort of clientele. The idiosyncratic four-door set up gives it an eccentric MINI Clubman sort of vibe, though Hyundai is likely to trumpet its practicality benefit more loudly than how kooky it is.

The engine hasn't been confirmed, but a four-cylinder petrol unit with around 140hp is mooted. Expect direct injection and a dual-clutch gearbox at some stage.

We expect Irish sales to start in time for the 2012 number plate change.