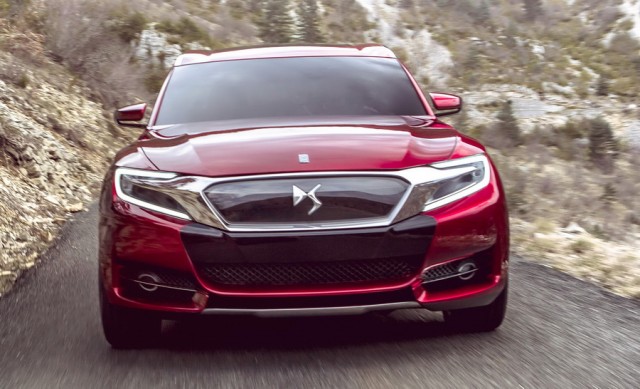 Citroen has unveiled the DS Wild Rubis - a futuristic looking SUV that should be a good indication of what the next model to join the stylish DS range could be like. It will be on display at the Auto Shanghai show later this month.

Exterior
The full detail of the interior won't be known until the Wild Rubis concept officially goes on display at the Shanghai Motor Show. We expect that in true DS style it will be covered in sumptuous leather and other high quality materials. As is the trend with some of the production DS cars, this could be a strict four seater, with the emphasis on luxury more so than practicality. Once the Shanghai show opens we'll tell you more about it.

Interior
Physically the Wild Rubis commands attention thanks to the 4.7-metre length and 1.95-metre width. The overall stance of the Wild Rubis is one of style and performance, helped along by the 21-inch alloy wheels that have the DS pattern finely etched into them. The silhouette of the car is highlighted with a chrome signature on the side.

The front of the Wild Rubis is dominated by a three dimensional radiator grille and striking LED headlights. It is reminiscent of the Numéro 9 concept and helps make this an equally bold design statement. At the rear Citroen has again turned the lights into an art-form, choosing to encase the lamps in chrome and make them appear jewel-like.

Mechanicals
Citroen hasn't released too many details regarding the mechanical side of the Wild Rubis other than saying that it will be a driven by full-hybrid plug-in technology. If and when it comes to making production this technology could well remain but it can be almost guaranteed that there will be conventional engine options offered. As with the DS5 Hybrid, an automatic drive system capable of switching between two- and four-wheel drive could be offered.

Anything else?
The DS range has been growing over the last few years and a stylish SUV would be a welcome addition to it. The market may not have been ready for some of the French brand's slightly wackier concept offerings but the luxury SUV market is doing well globally, so now could be the right time for Citroen to enter it with an ever so slightly toned down production version of the Wild Rubis.