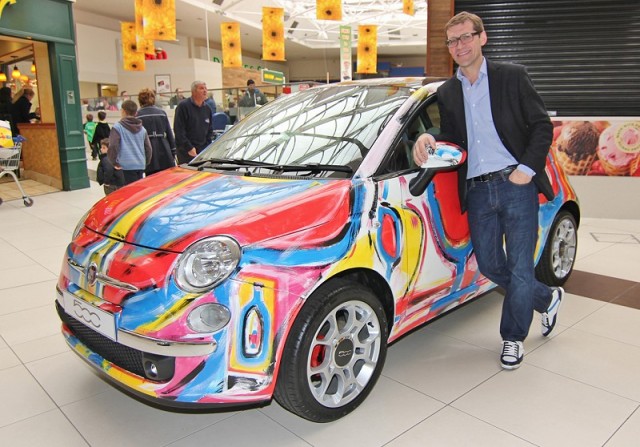 So called 'Art cars' are nothing new to the world (BMW has a range of cars painted by artists such as David Hockney and Roy Lichtenstein dating back to 1975), but rarely do we get to see them in Ireland and it is even rarer for the process to be documented on video for everyone to see the work involved in turning a car into a work of art.

The art car in question is the Fiat 500 "by Munier" painted by successful restaurateur, accomplished artist and star of RTE's Master Chef TV show. The one-of-a kind Fiat 500 was completed in Fiat Group Automobile Ireland's Naas Road headquarters and is currently on display in the Nutgrove Shopping Centre, Rathfarnham, Dublin 14, until April 10th and will appear at various exhibitions and events around Ireland over the coming months.

The work came about through a chance meeting between Nick Munier and Adrian Walsh, Fiat Group Automobiles Ireland Managing Director. According to Nick: "I had the idea of wanting to achieve what other great artists like Andy Warhol and Tracey Emin had done before by projecting their artistic vision on to three-dimensional objects such as cars. Then, about a year-and-a-half ago, I met with Adrian (Walsh) and over the course of our conversation it transpired that he had a similar vision and before I knew it he had offered me a Fiat 500 to fulfil another one of my long-held ambitions."

"My biggest challenge was to paint from scratch and use special oil paint, which became quite stressful due to its capacity to drip quickly and dry very fast. I allowed myself two days to paint as I wanted a quick chaotic feel to the finished project and despite a few hiccups along the way I am immensely pleased and proud of the result."