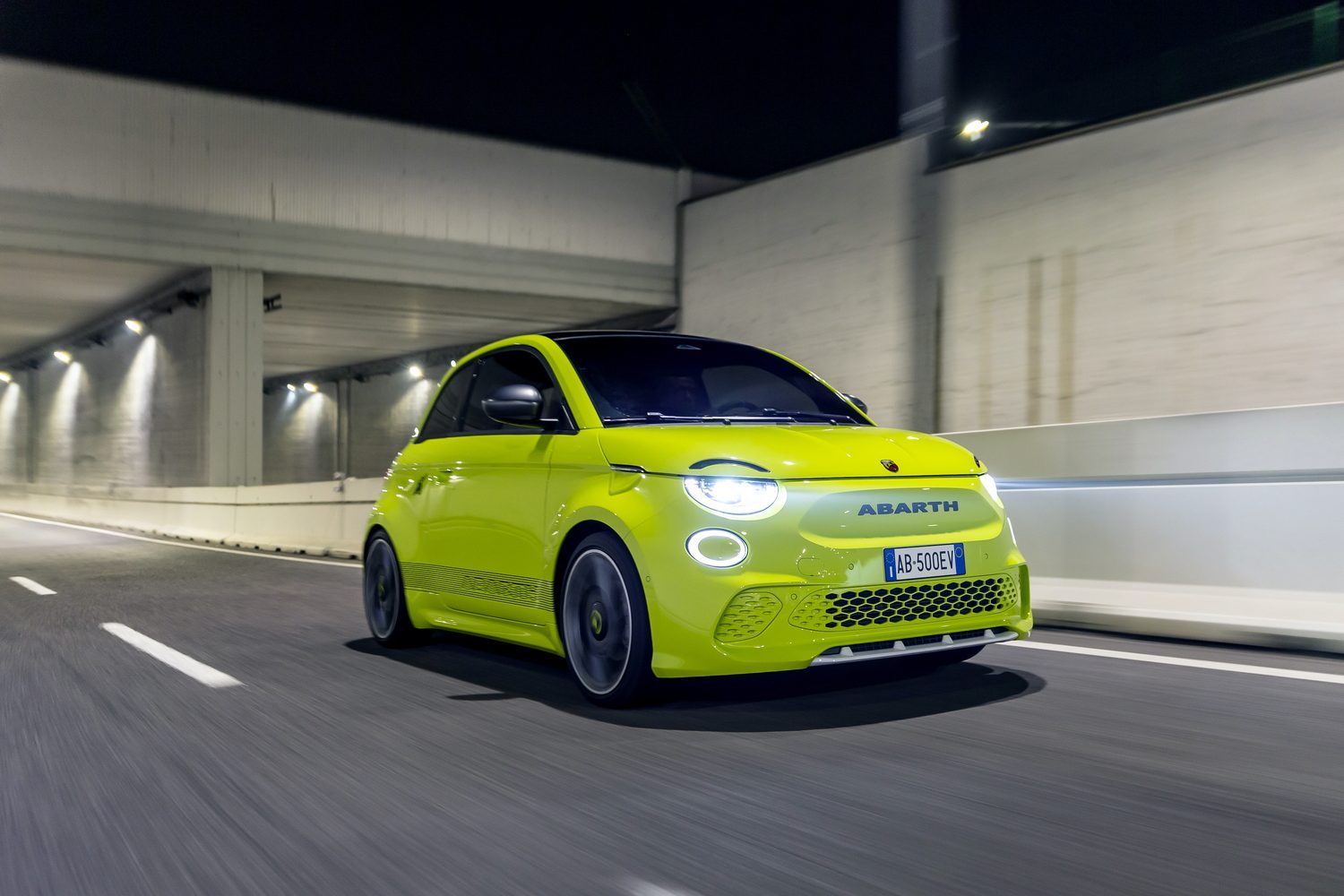 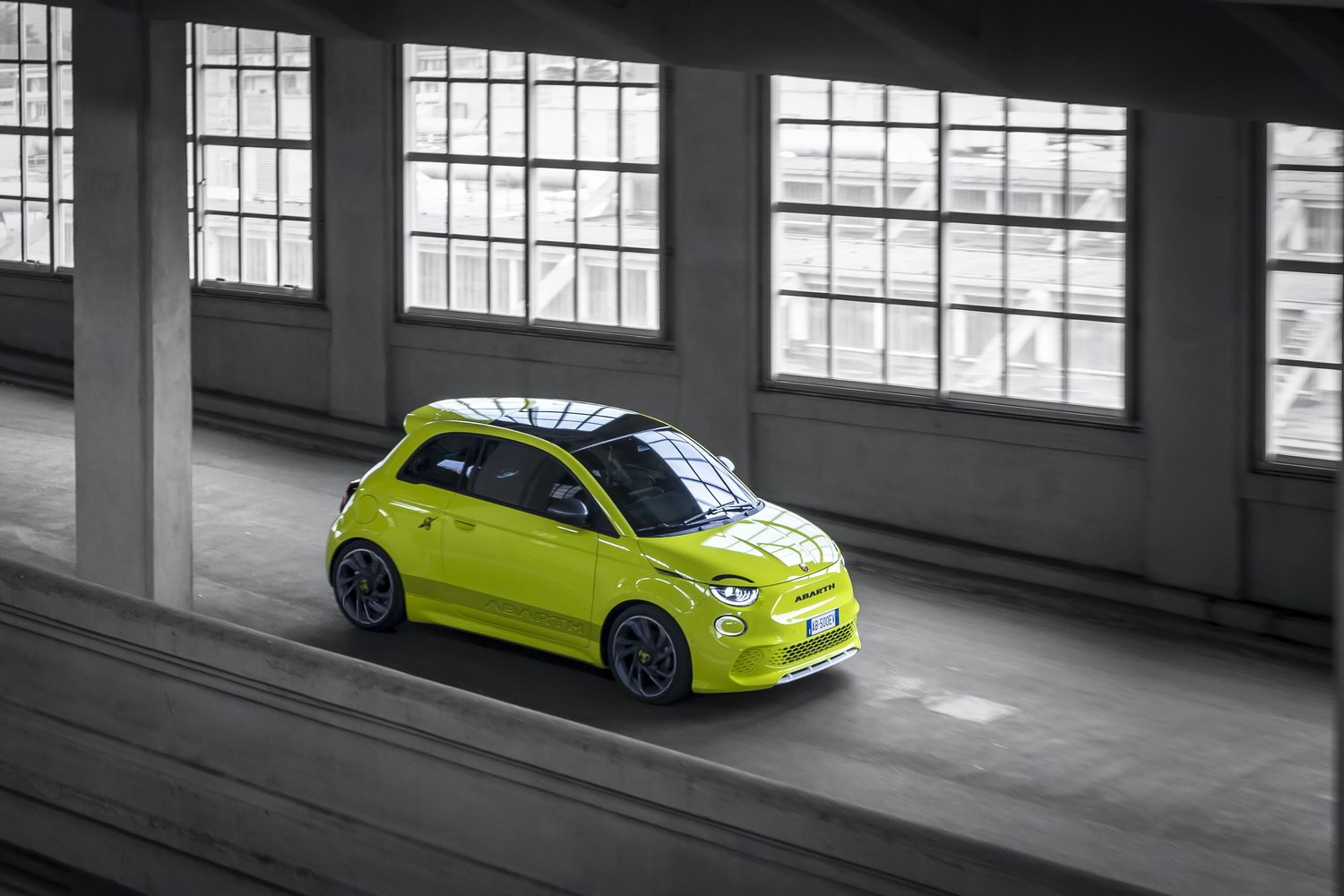 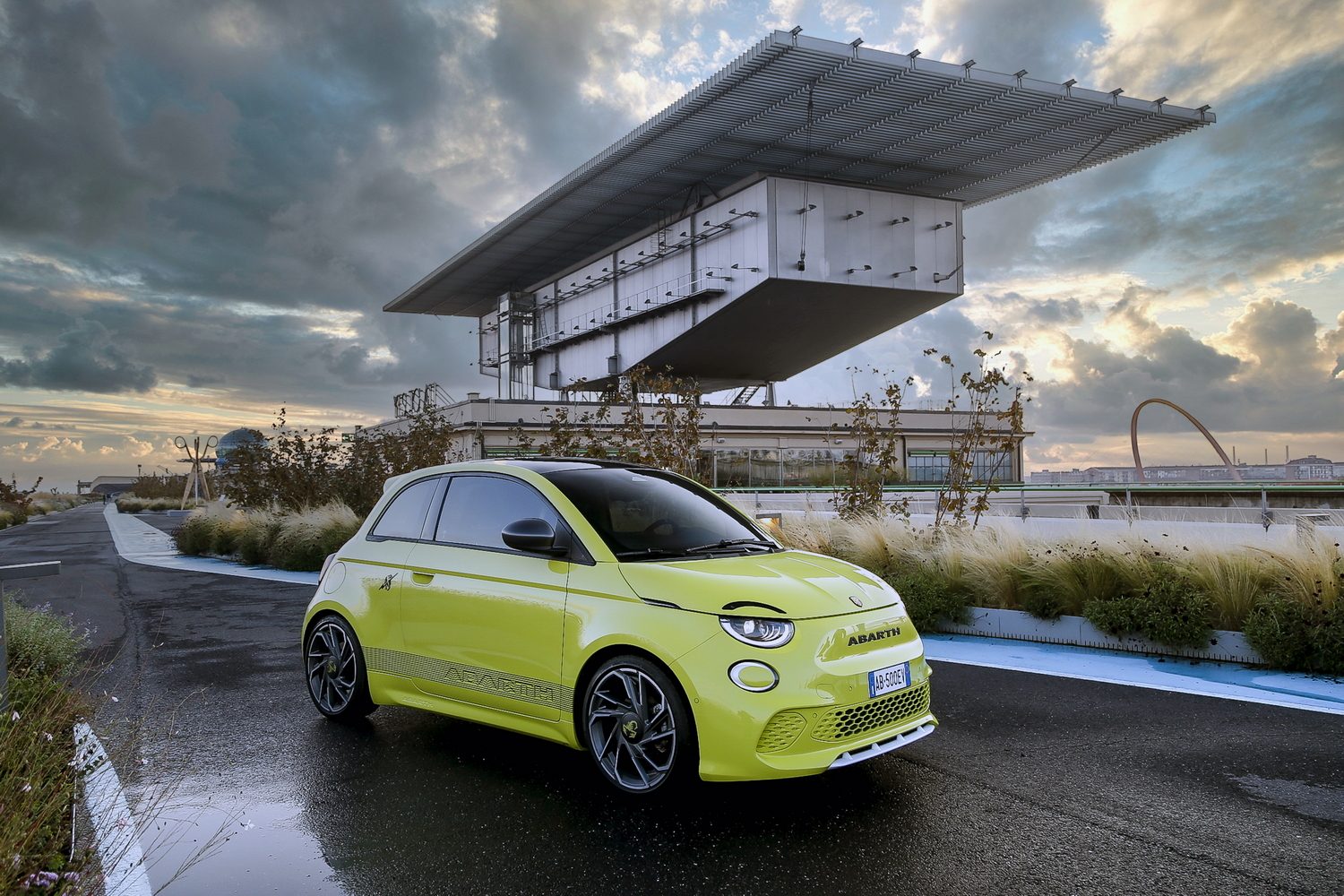 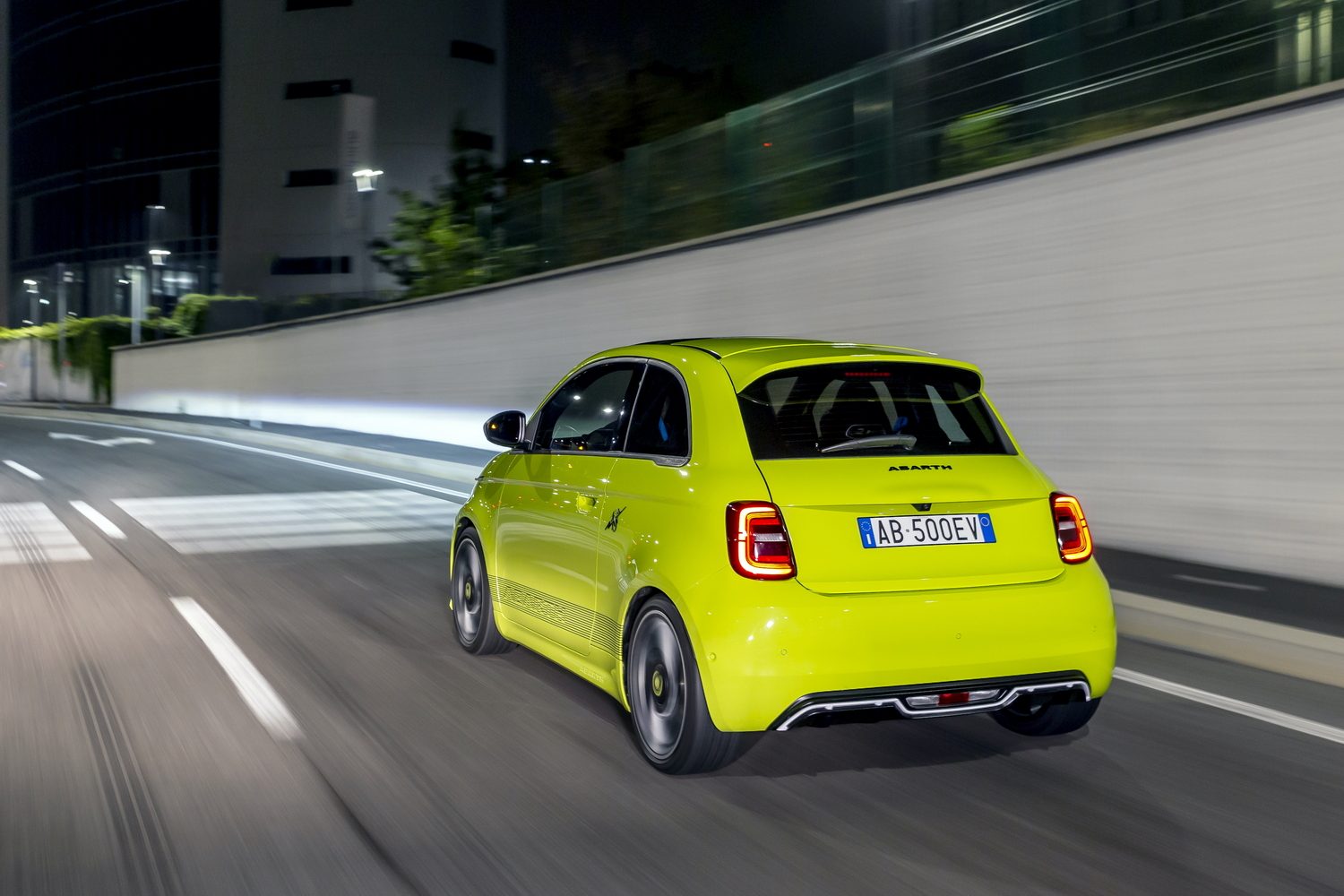 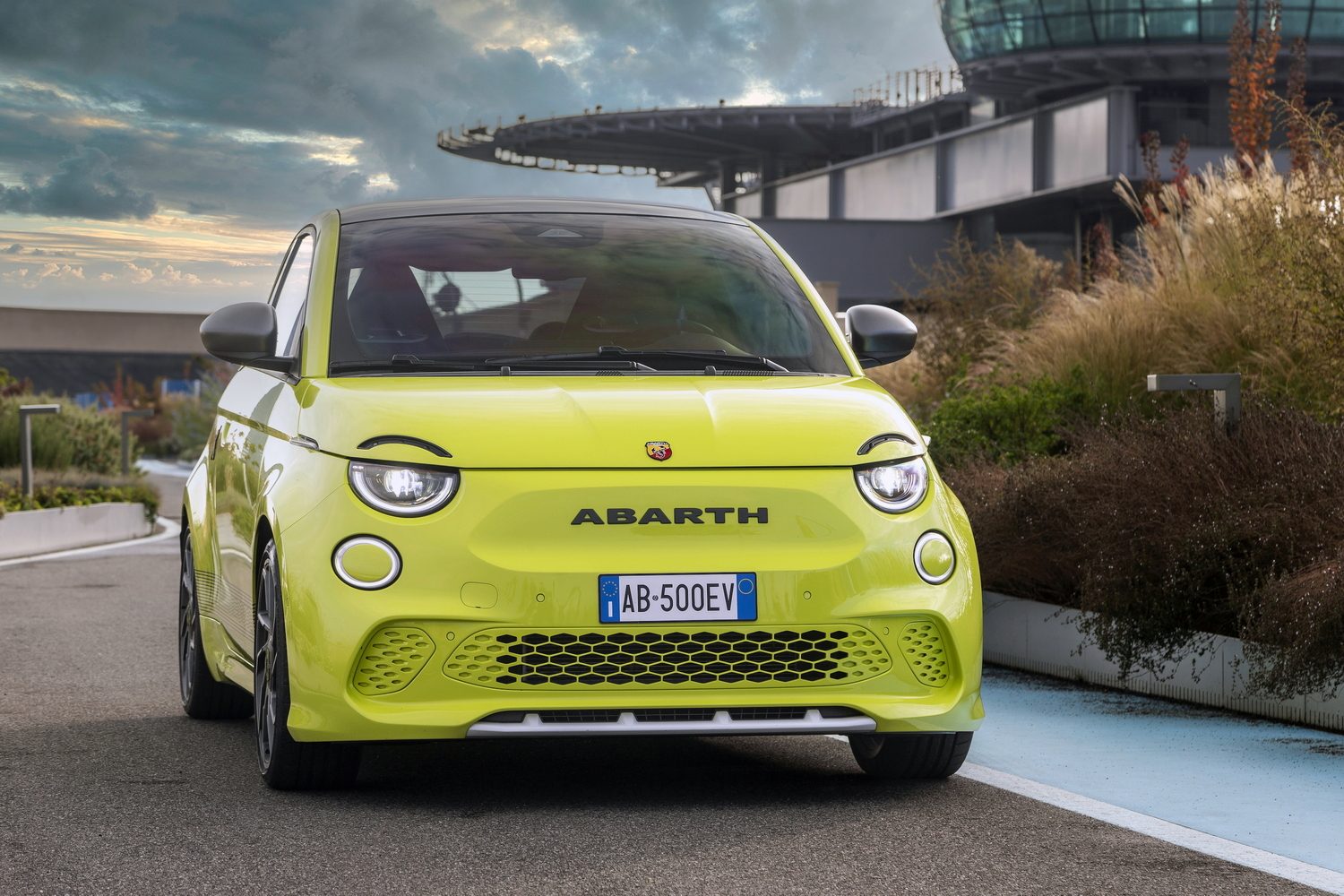 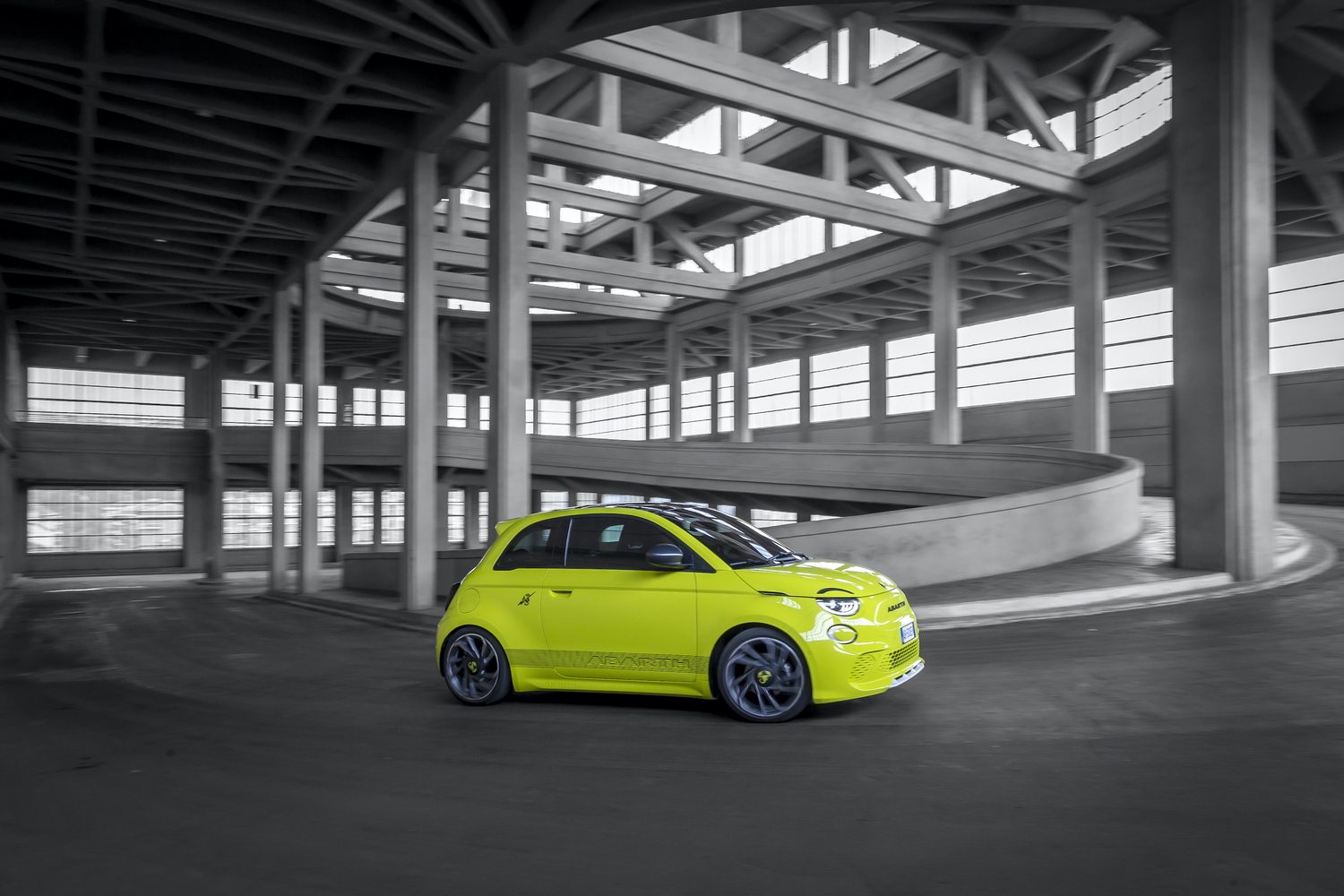 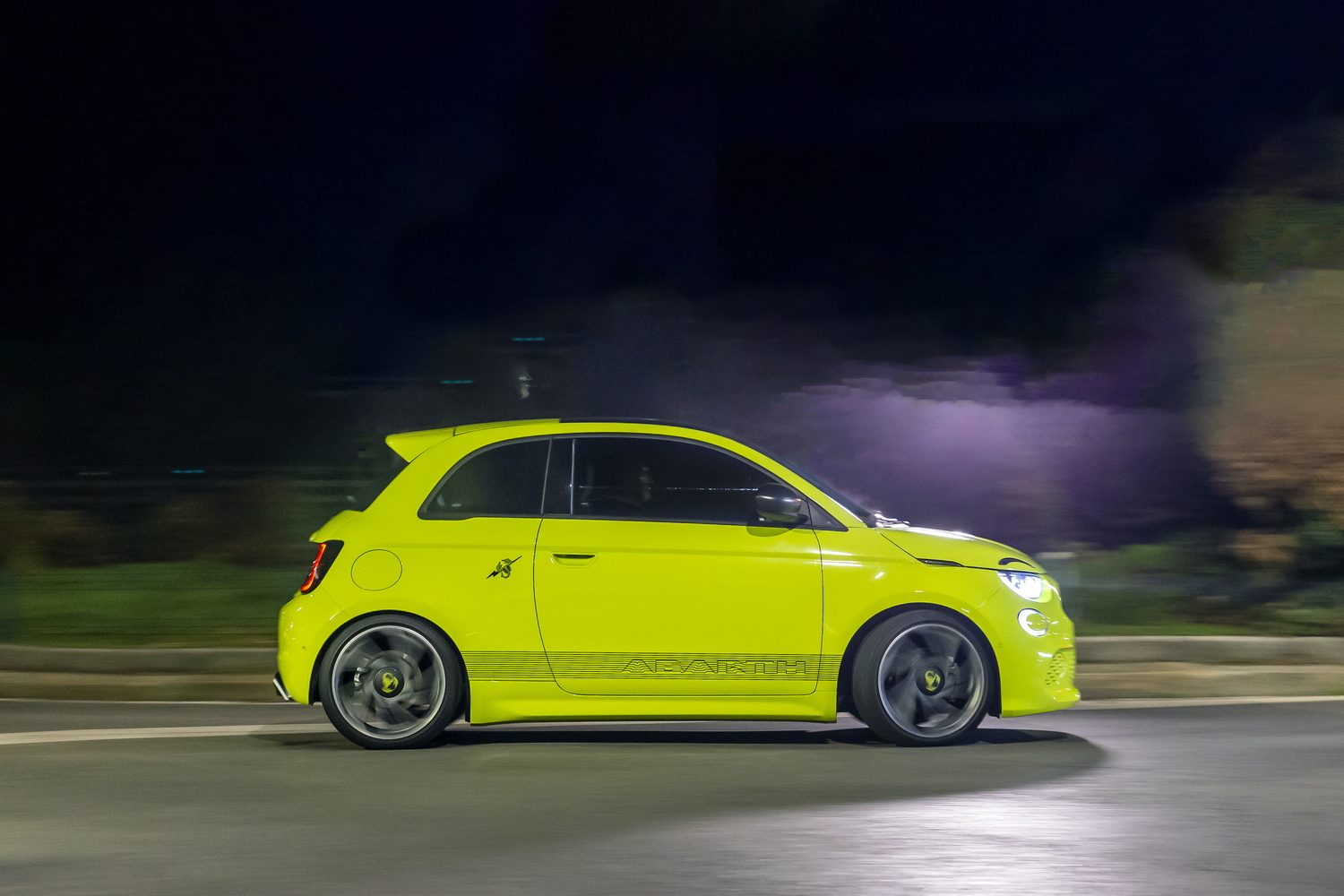 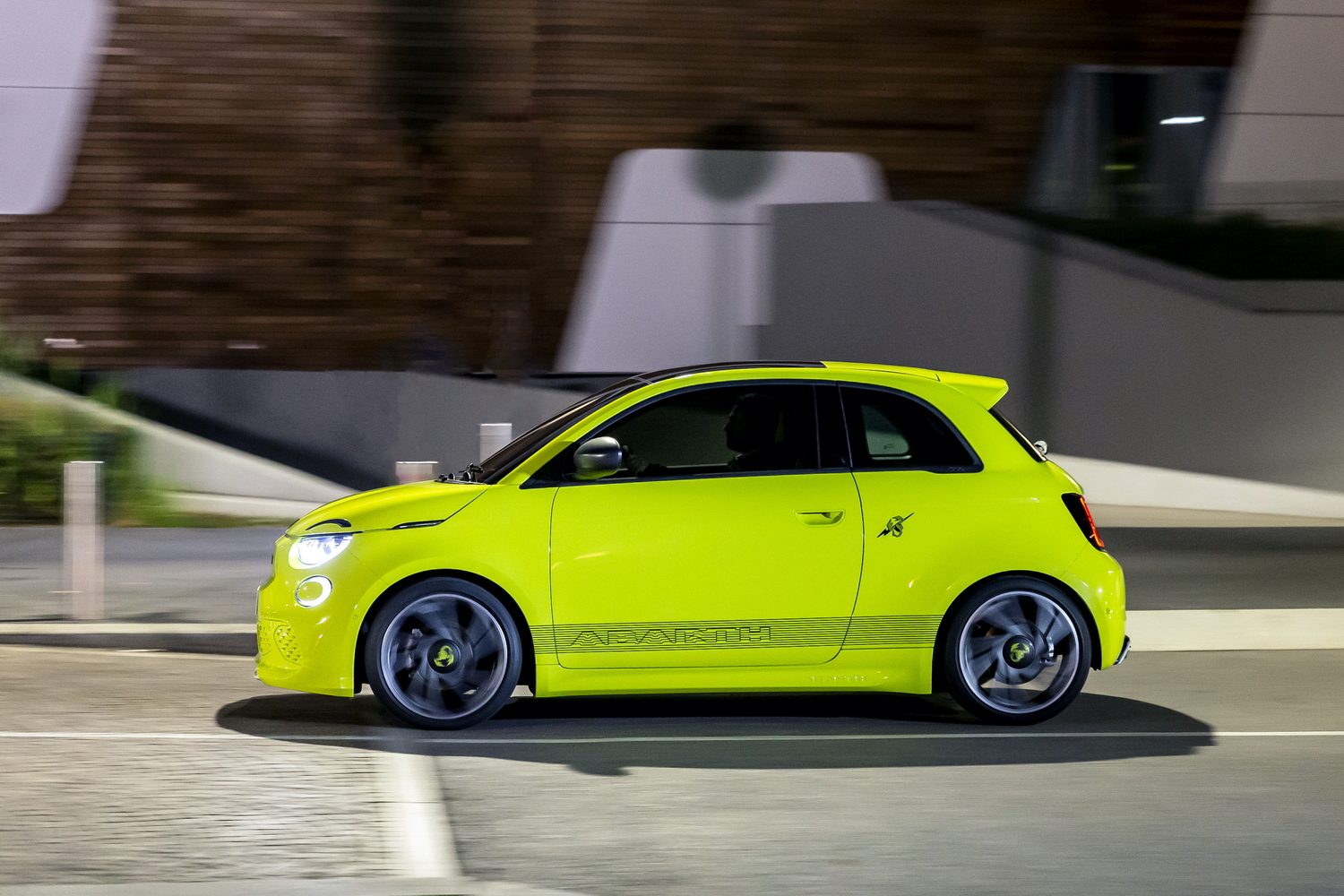 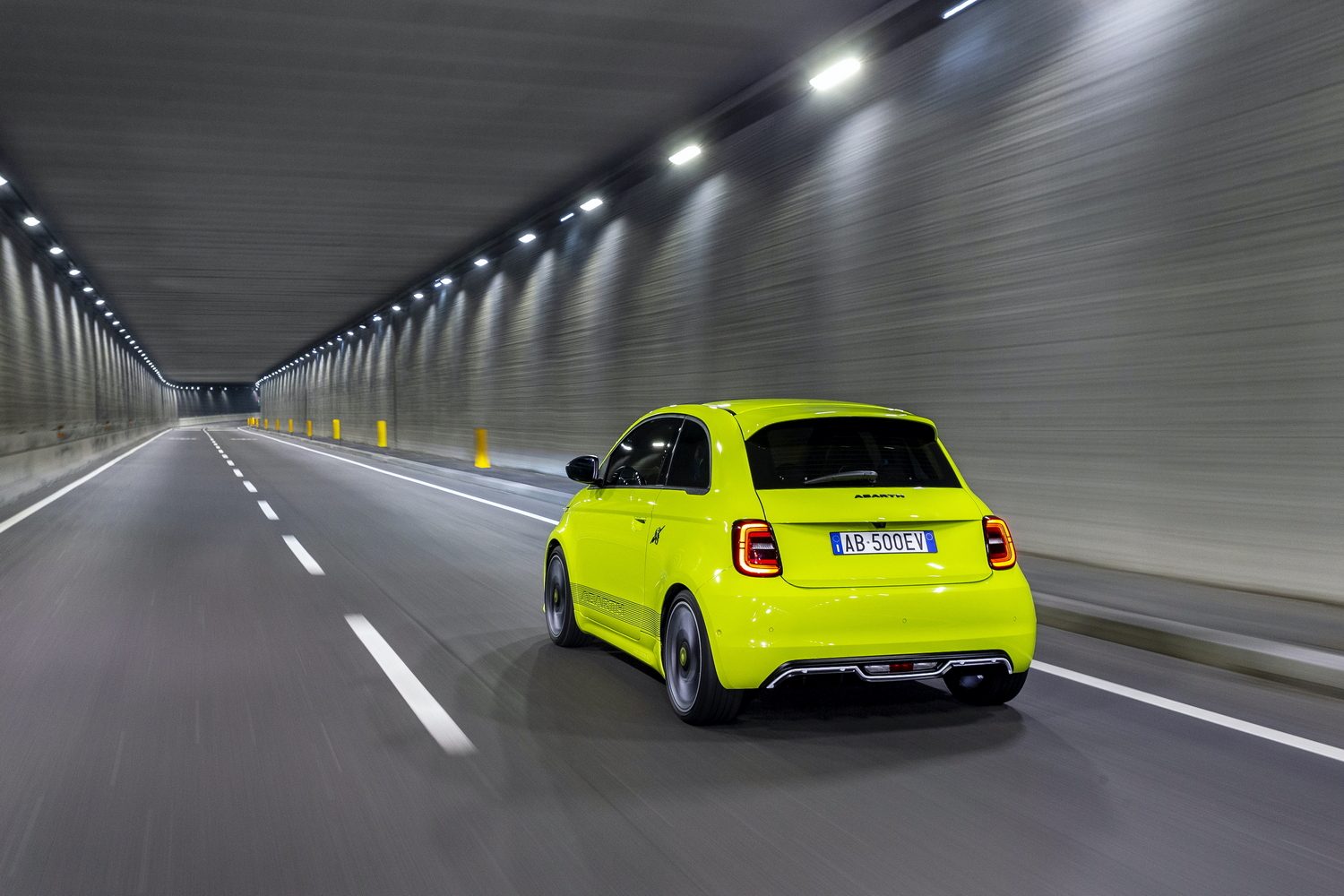 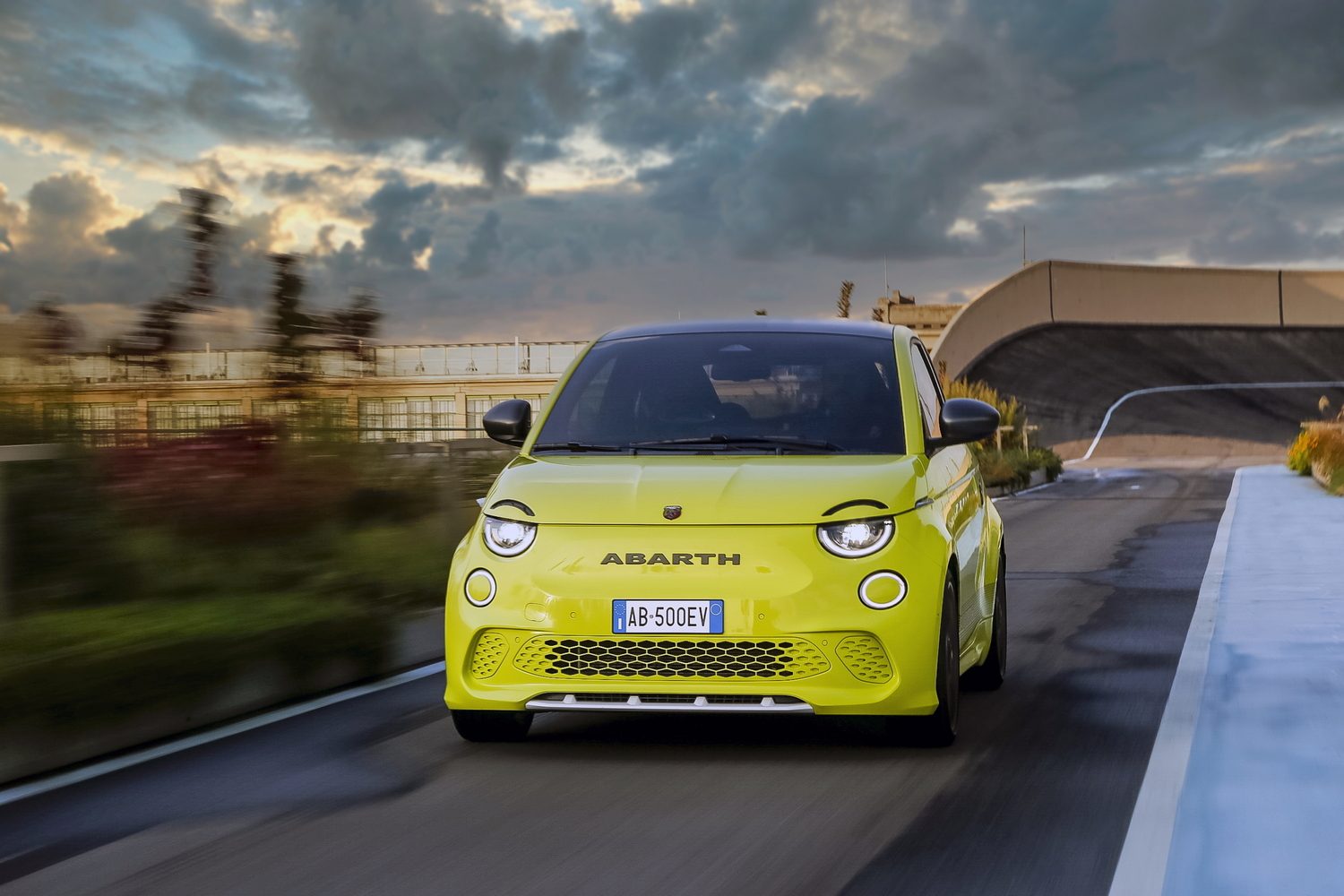 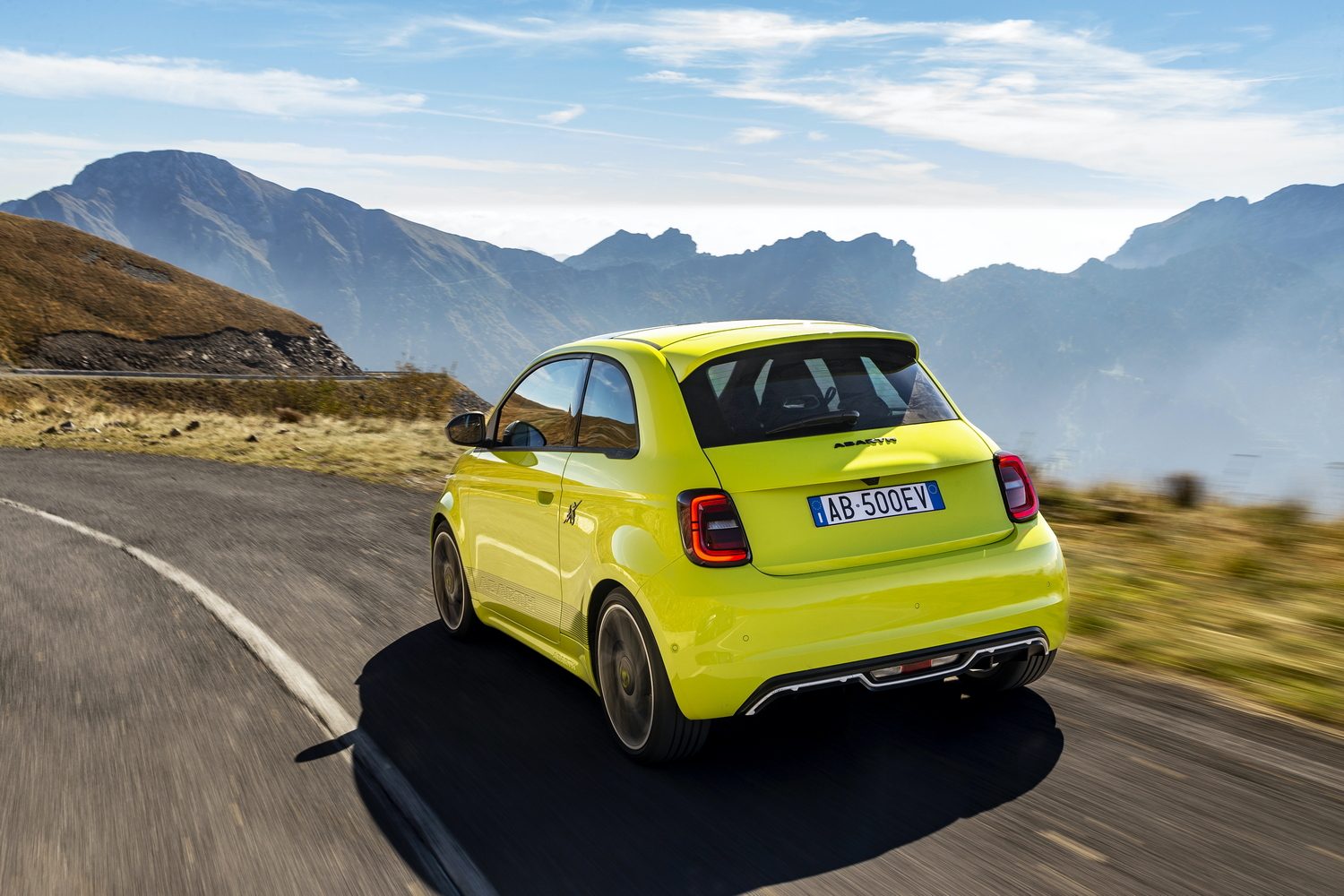 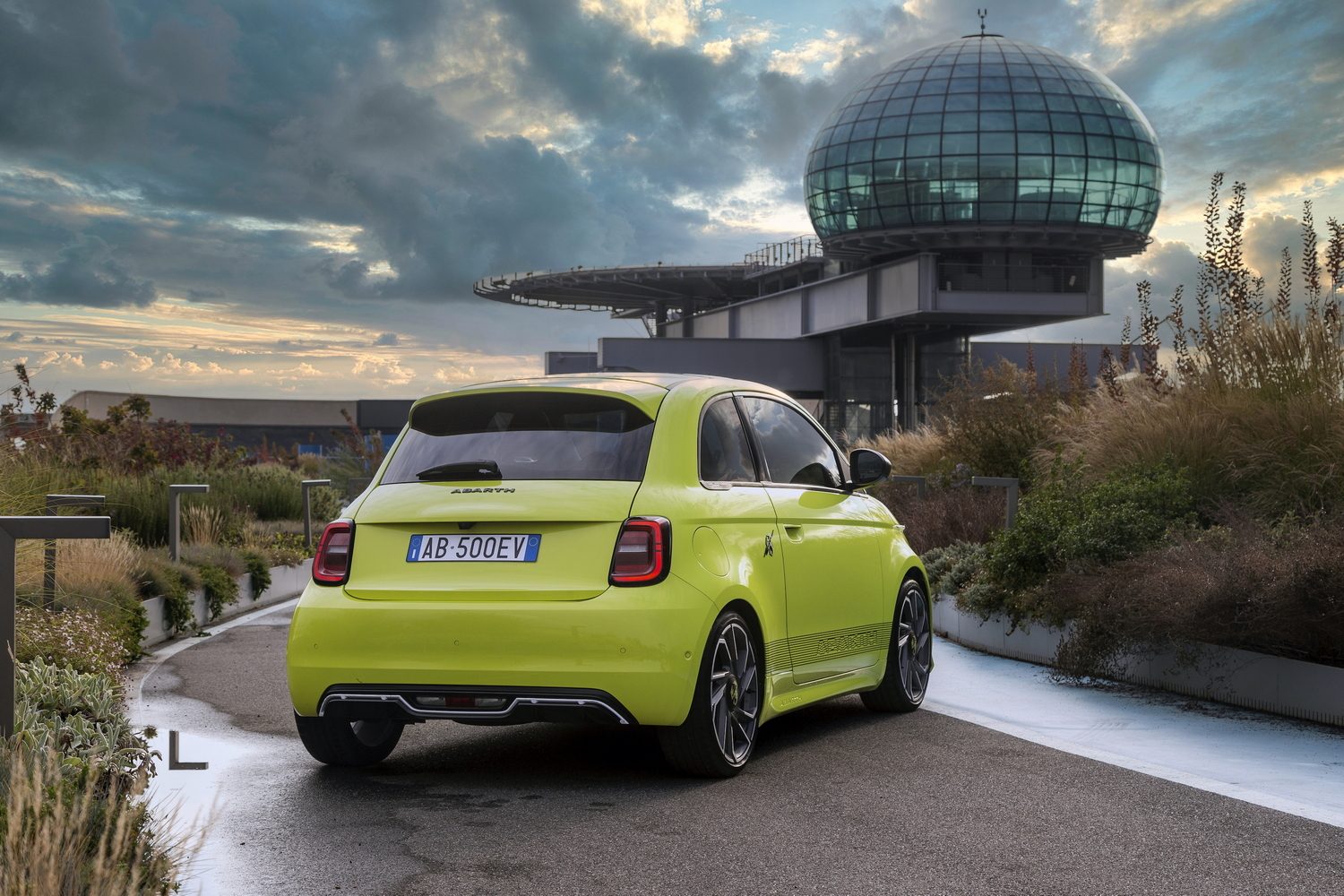 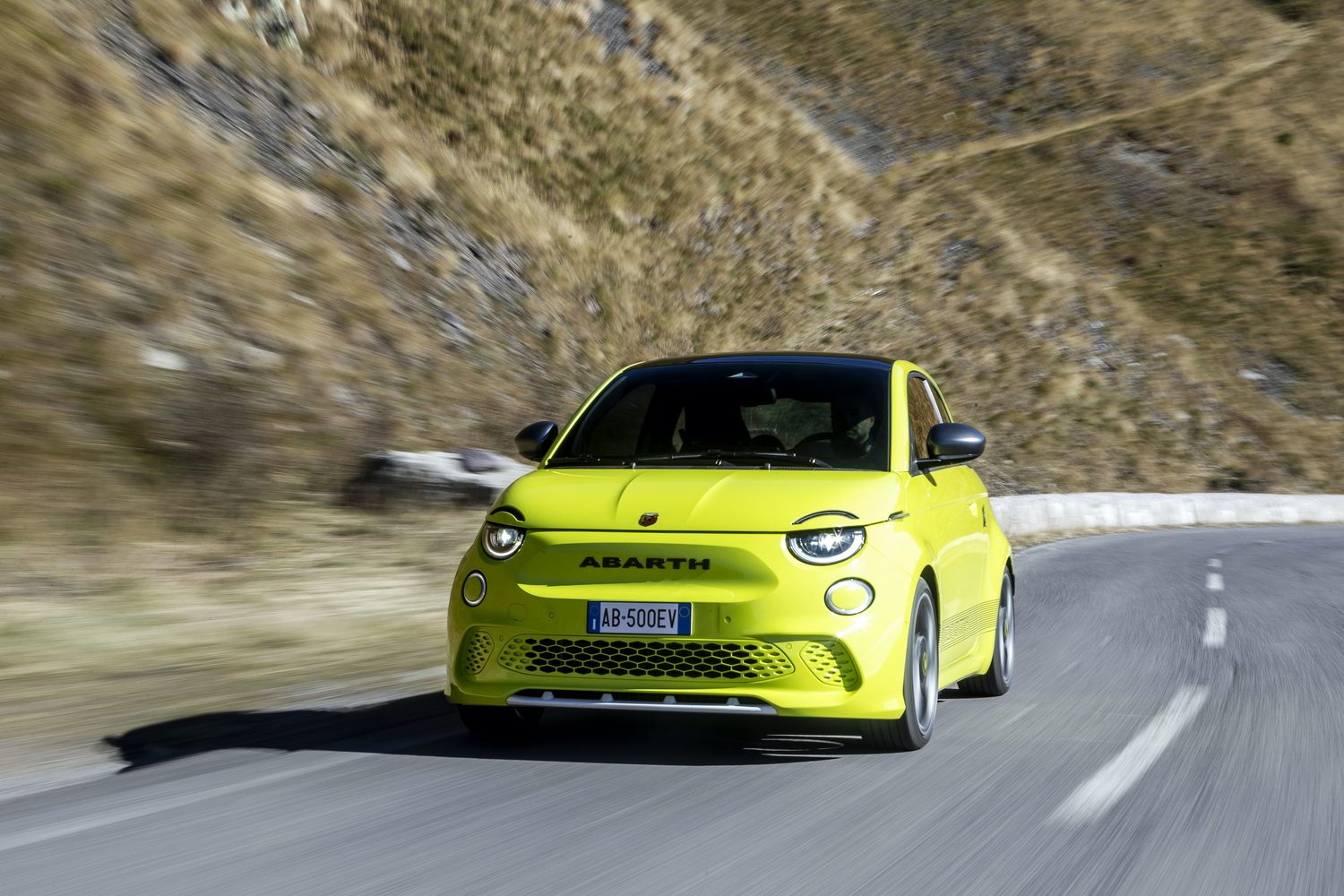 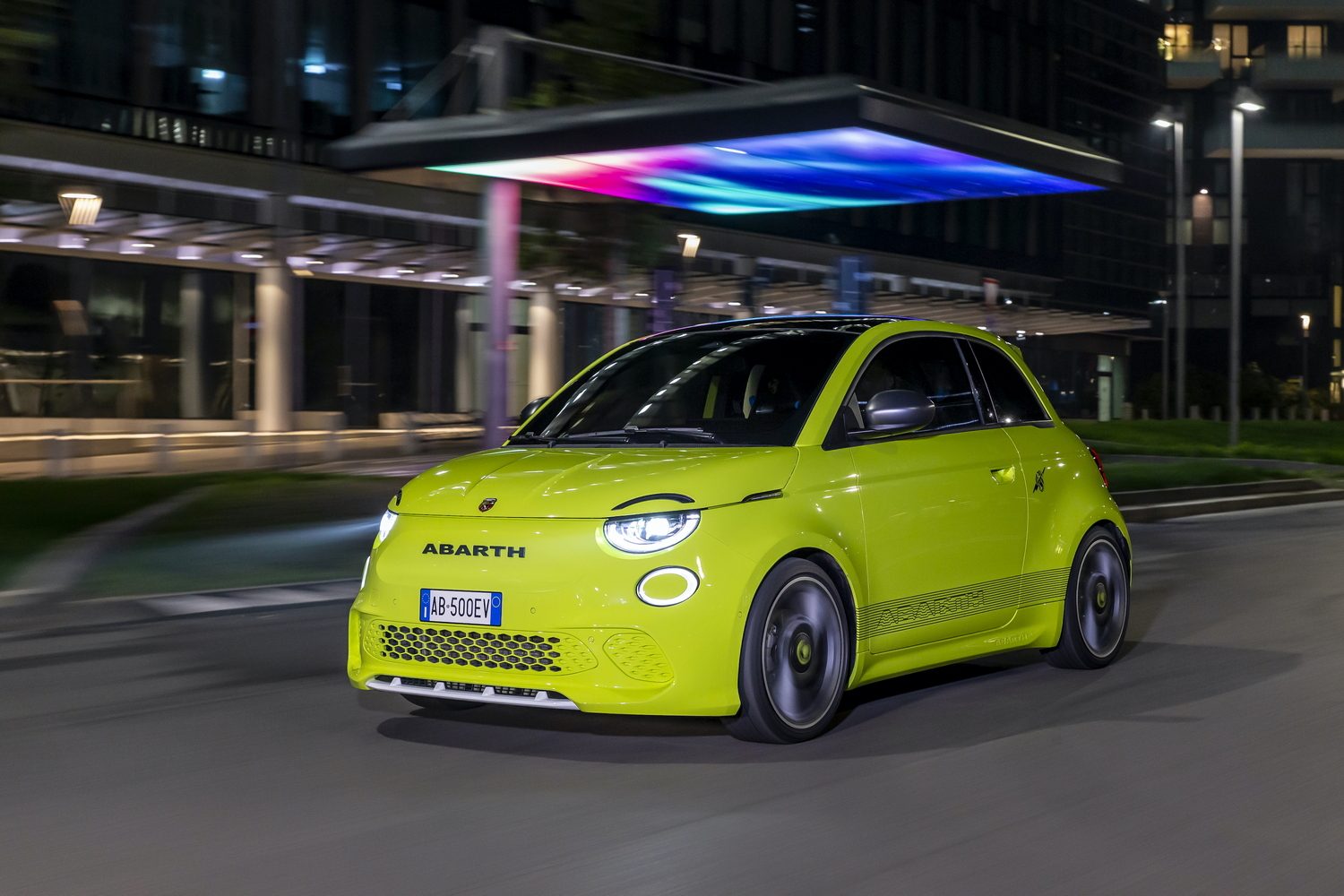 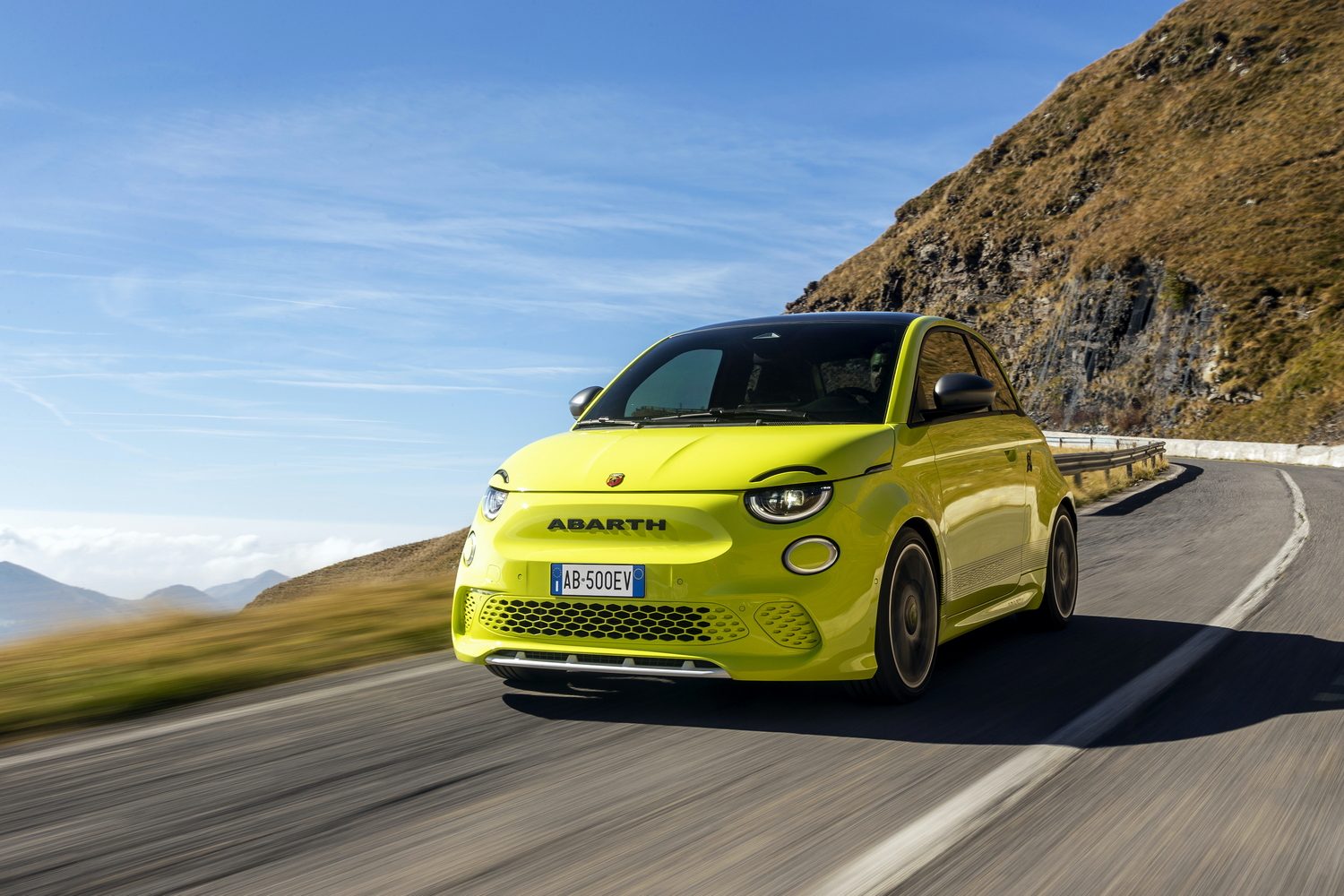 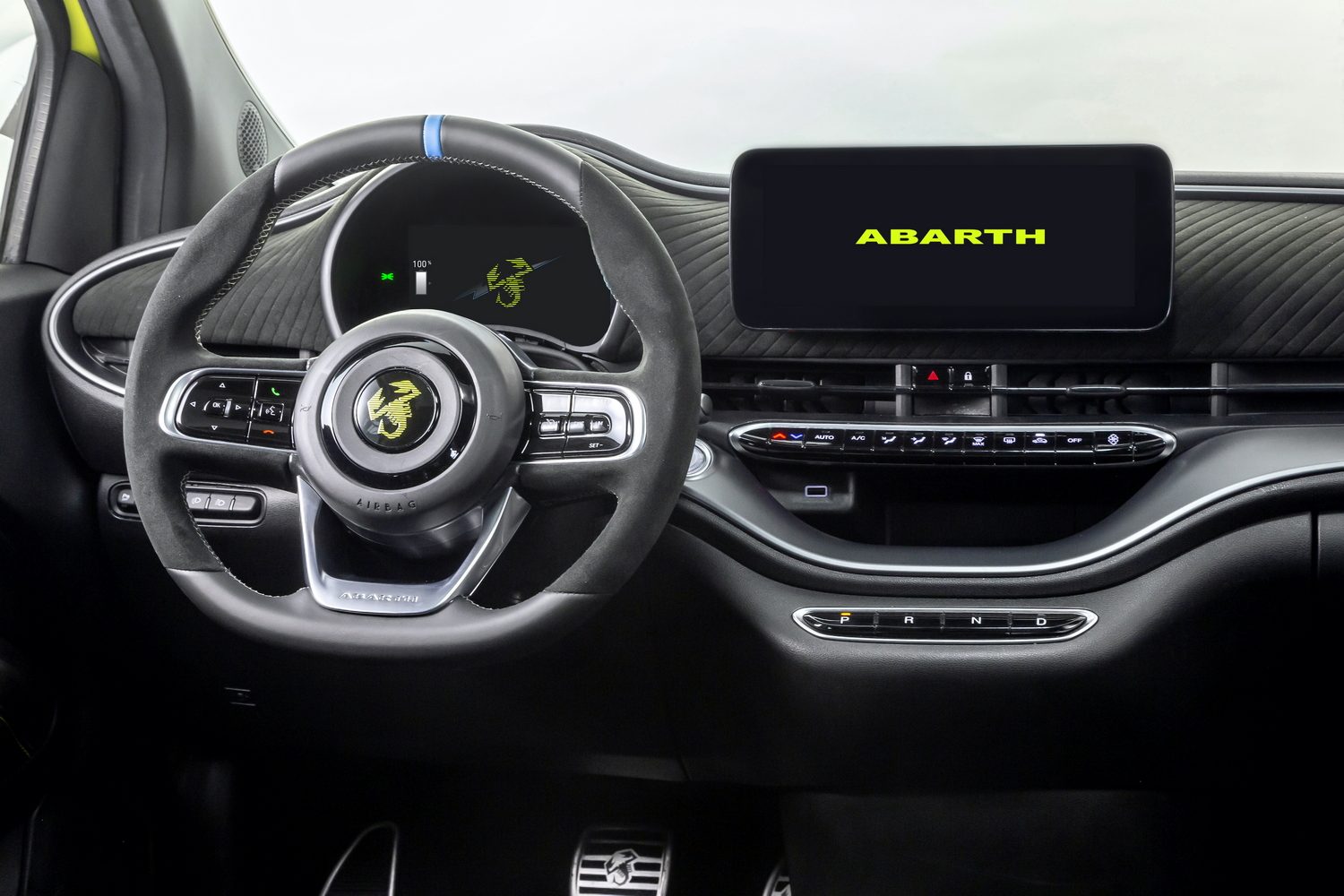 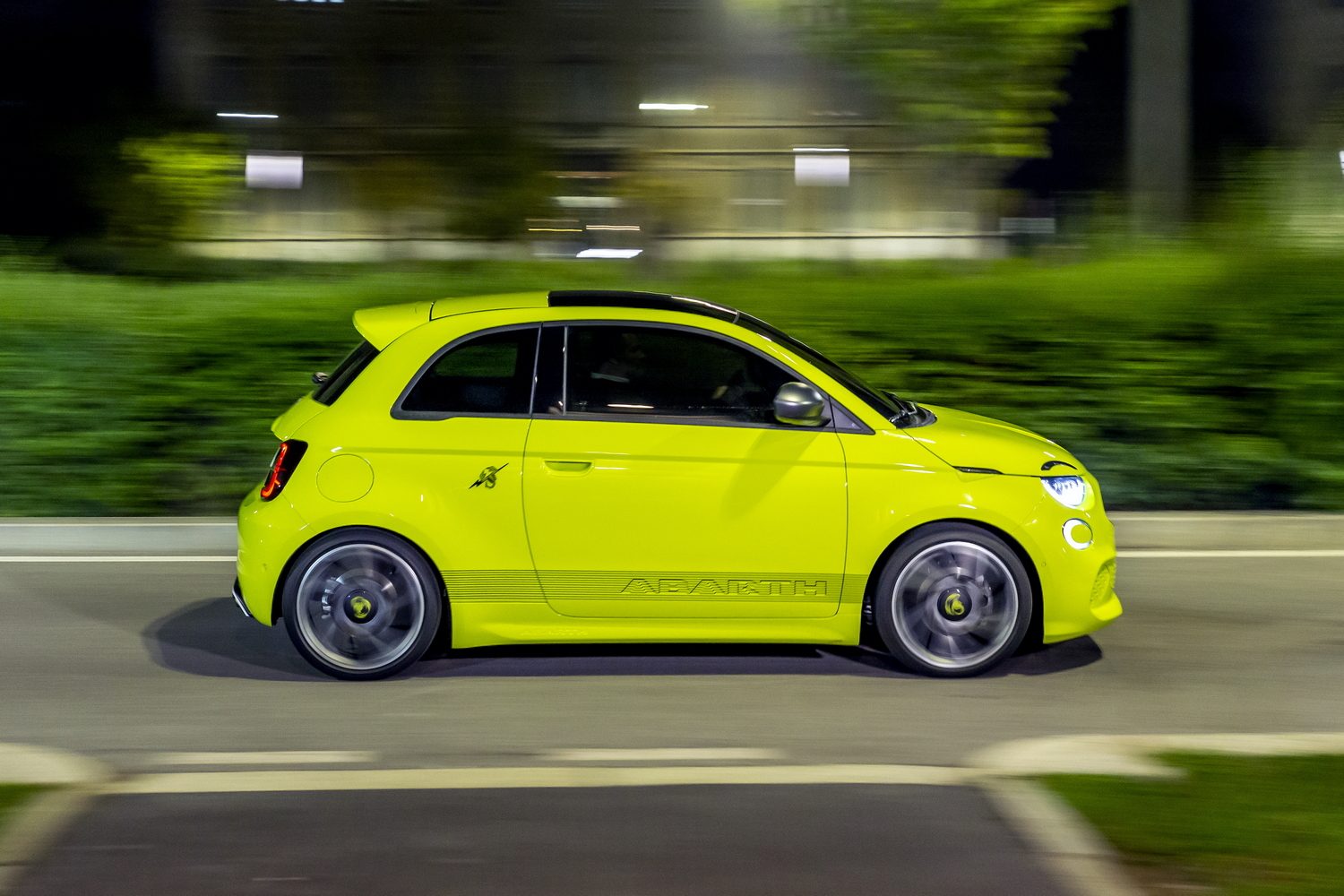 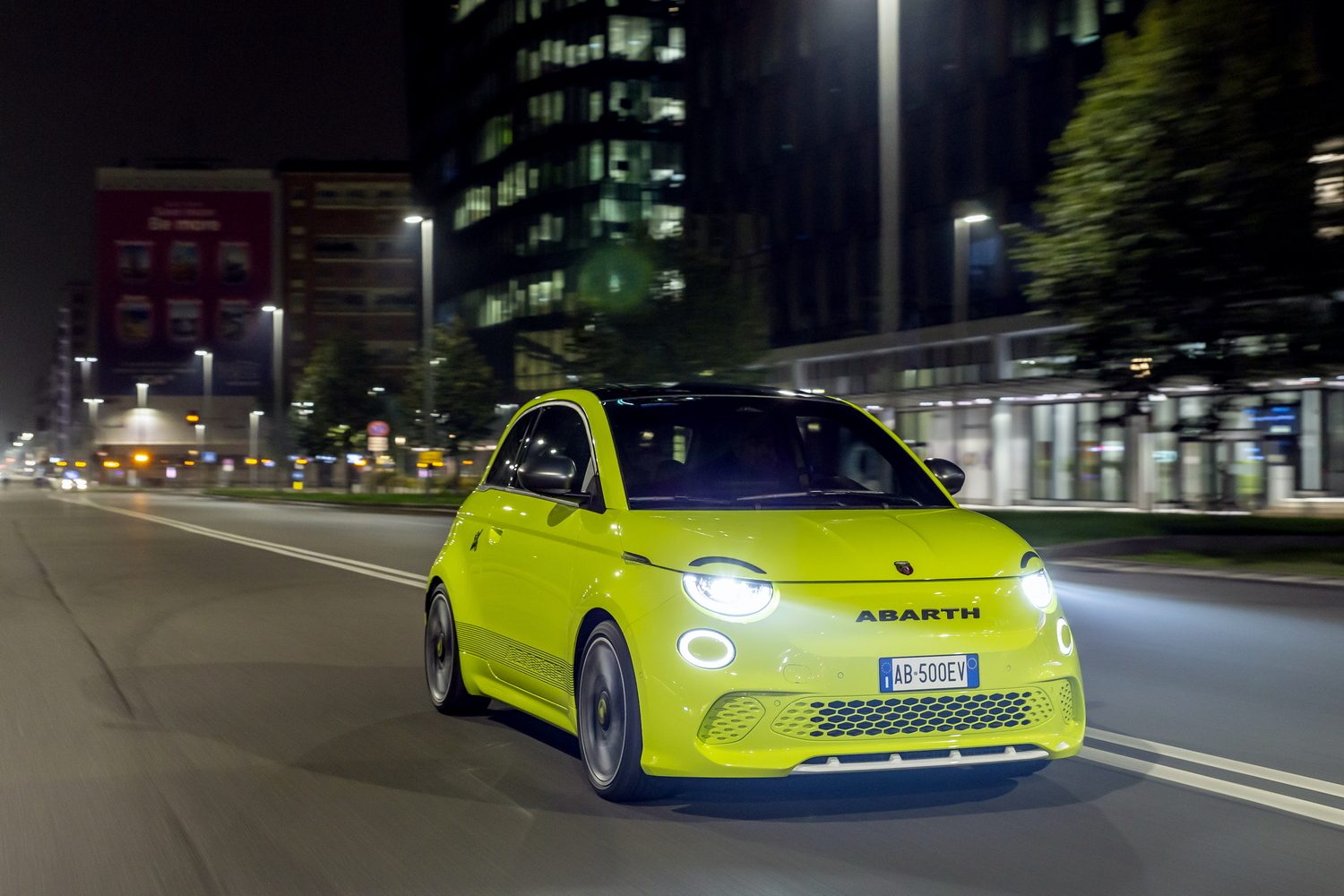 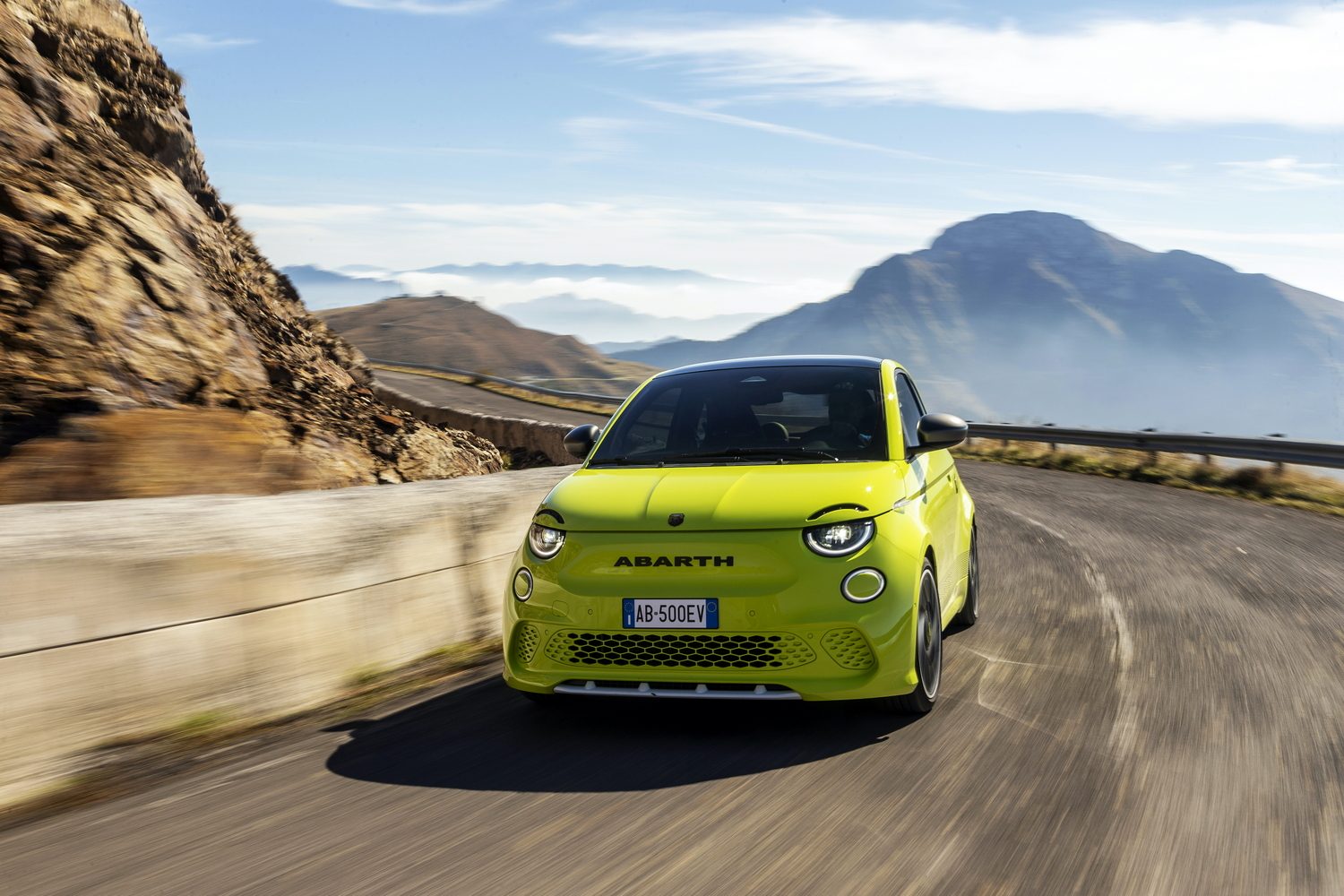 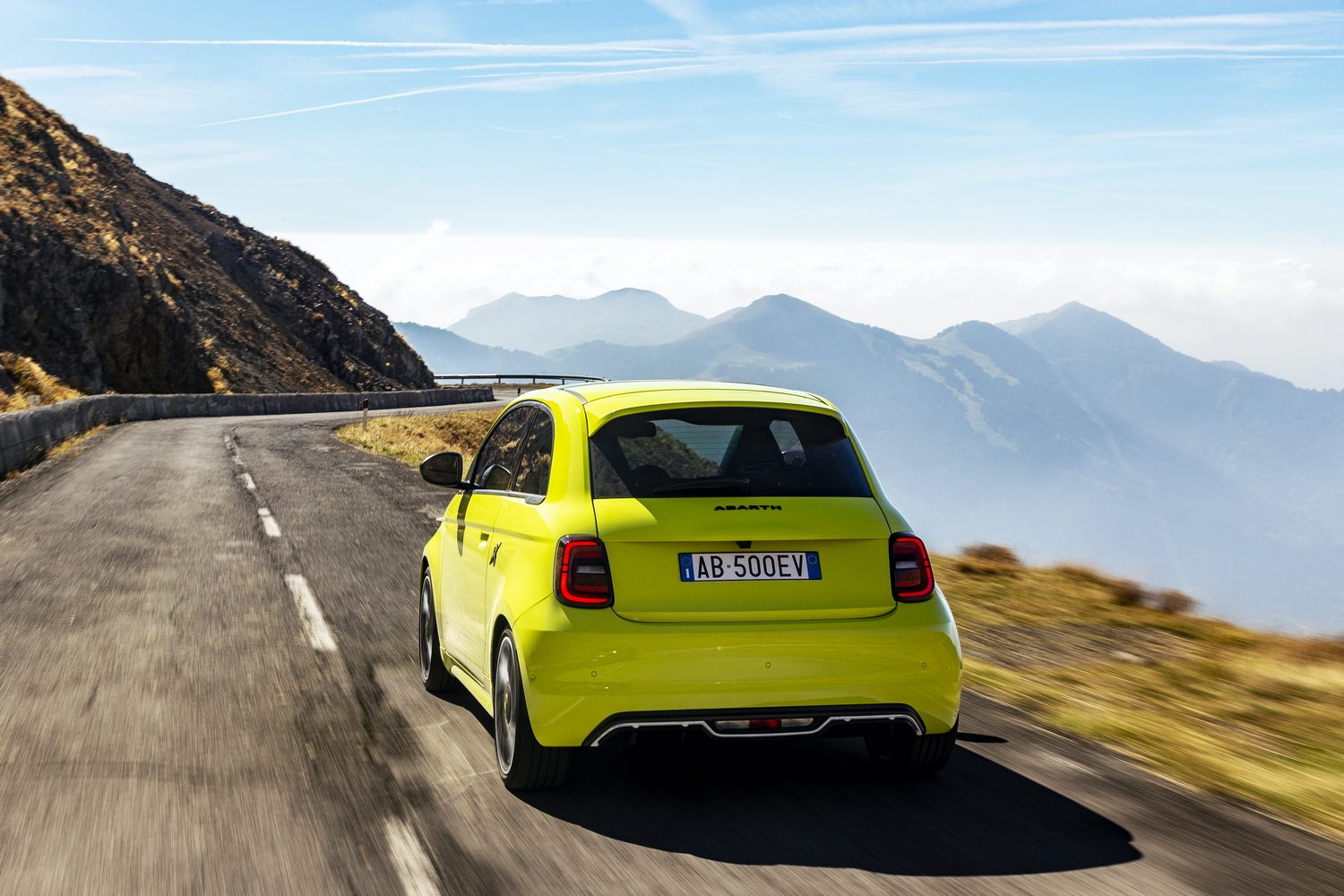 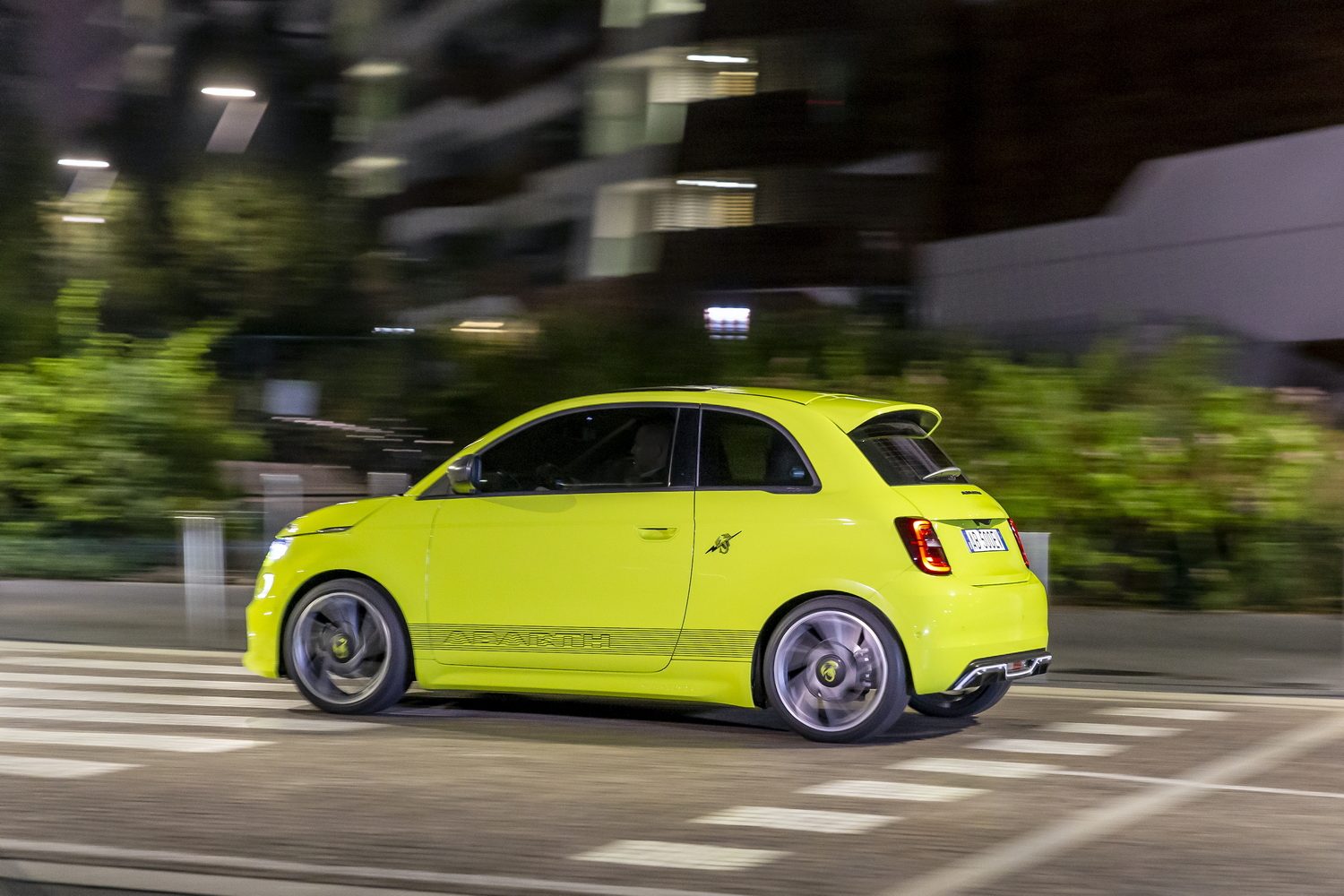 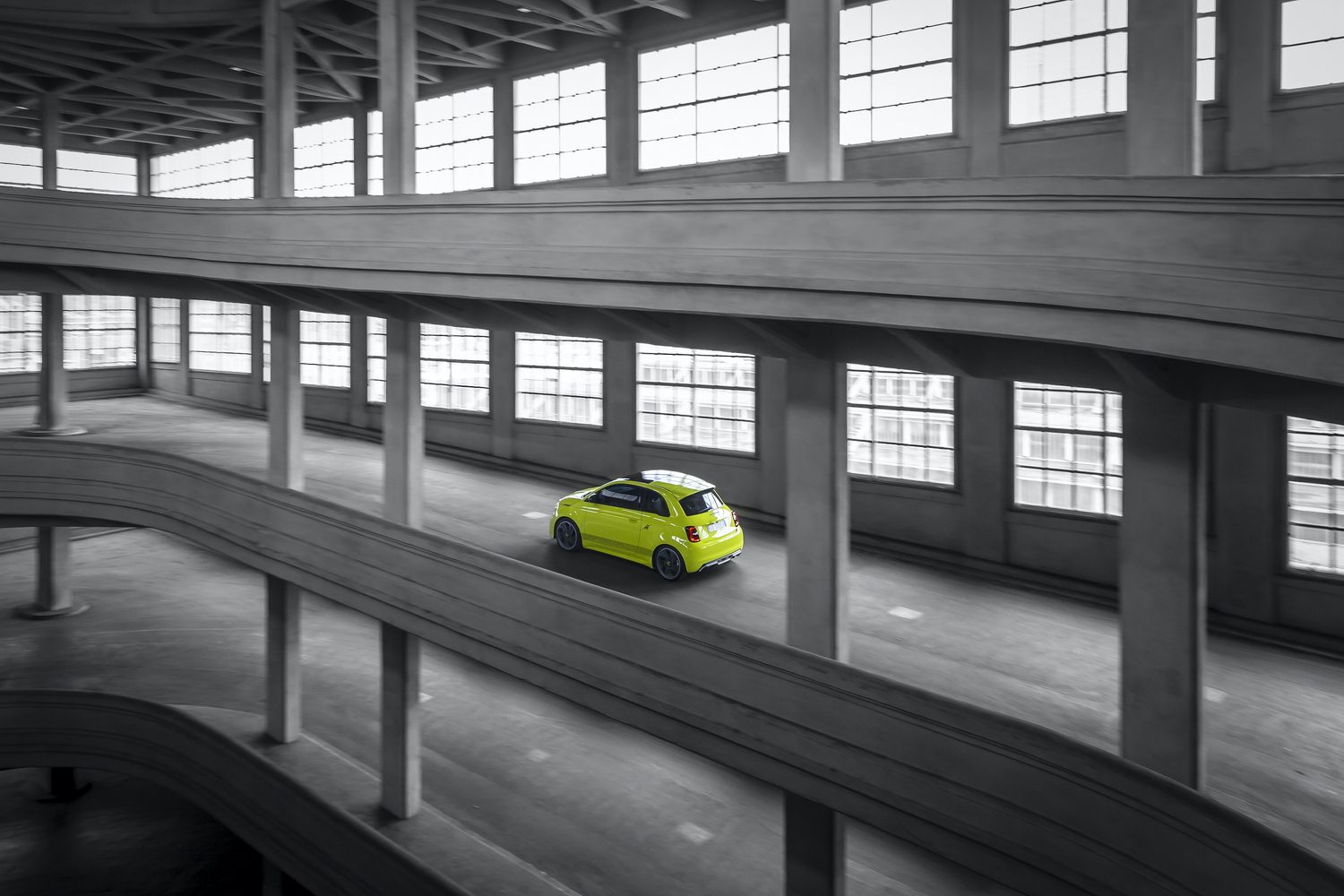 New Abarth 500e is slower than petrol model on paper, but quicker on track.

Abarth says the move to electric power is all about performance. Under the floor is a 42kWh battery that feeds a 155hp electric motor with up to 235Nm of torque, offering a 0-100km/h time of seven seconds. That's slightly slower than the petrol-powered 695, but Abarth says the instant acceleration provided by the electric motor makes the 500e faster around town.

More to the point, the longer wheelbase, widened track and low centre of gravity allows the Abarth 500e to achieve "better corner entry and a higher cornering speed" than existing petrol-powered Abarths, allowing it to lap the firm's test track a second faster than the 695.

The powertrain is governed by three driving modes - Turismo, Scorpion Street and Scorpion Track - allowing drivers to prioritise performance or range as they see fit. The Turismo setting limits outputs to 136hp and 220Nm for maximum range, while also engaging "one-pedal" mode. That allows maximum regenerative braking to reduce speed when the driver relieves pressure on the accelerator pedal, reducing the energy wasted through braking while still slowing the car. The idea is that with some forward planning, drivers need barely use the brakes.

Scorpion Street mode also makes use of the one-pedal braking feature, but it does so while unleashing all 155hp and 235Nm, but the Scorpion Track mode does away with brake energy regeneration in a bid for maximum track performance.

Abarth is yet to announce official range figures for the new 500e, but the company has said the Abarth will be a little less efficient than the standard Fiat 500e, which, according to the official economy test, is capable of 320km from the same 42kWh battery pack. Nevertheless, the Italian engineers expect the performance model to manage more than 250km between trips to the plug.

Abarth also says the 500e will have an 85kW fast-charging system, which means a 100kW charge point will be able to recharge the battery to 80 per cent in 35 minutes. There's no word on how long that will take using a domestic 'wallbox' charging unit, but Abarth says owners will be able to control home charging using the brand's app.

Of course, the move to electric power has robbed the Abarth of one of its most distinctive features: the rasping exhaust note. Even the Italian company's bigwigs admit the sound has always been vital for the brand. So, the 500e has been fitted with what Abarth calls "an immersive sound experience" for those who want to "drive electric without giving up on the famous and unmistakable Abarth roar". That's provided by the optional Sound Generator, which "faithfully" reproduces the sound of an Abarth petrol engine, although this can be turned on or off when the car is stationary.

For those that choose not to pipe fake engine noises into the cabin, though, the Abarth 500e produces a series of guitar 'strumming' noises. When the car is turned on or off, the guitar plays, while a strumming guitar plays the first time you exceed 20km/h.

Externally, the Abarth 500e is heavily based on the Fiat 500e, but it now comes with an 'electrified' Scorpion logo and more aggressive body styling. There's a new front bumper with a white splitter section and a sportier rear bumper with diffuser inserts, as well as bespoke wheels and Titanium Grey door mirror caps. As with the petrol-engined Abarths, the 500e will be offered in hatchback and convertible forms.

Abarth will also offer customers a Scorpionissima launch edition model, of which just 1,949 units will be made available. That figure was chosen to remember the company's founding in 1949, and it will be split between hatchback and convertible models.

Customers will get a choice of Acid Green or Poison Blue paintwork, with 18-inch alloy wheels and rear privacy glass fitted as standard. Hatchback models will also get a fixed glass roof, as well as the steel pedals, grey dashboard trim and steel door sill plates common to all Scorpionissima cars.

Inside, the high-specification model will be fitted with an Alcantara-embossed dashboard. Alcantara features on the steering wheel and heated front seats, too. The rear seats will fold 50/50, while the driving seat will be height-adjustable. Scorpionissima models also benefit from a seven-inch digital instrument display and 10.25-inch touchscreen infotainment system with navigation, as well as wireless Apple CarPlay and Android Auto smartphone connectivity.

Other standard features include automatic lights and wipers, wireless phone charging and automatic climate control, not to mention the 360-degree manoeuvring camera and ultra-high-definition rear-view camera. A JBL premium audio system rounds out a comprehensive list of features.

Abarth has not yet confirmed prices for the Irish market - the company doesn't even have official range data yet - but Abarth is taking pre-orders now ahead of first deliveries in June 2023.