VW rallies - in a Skoda 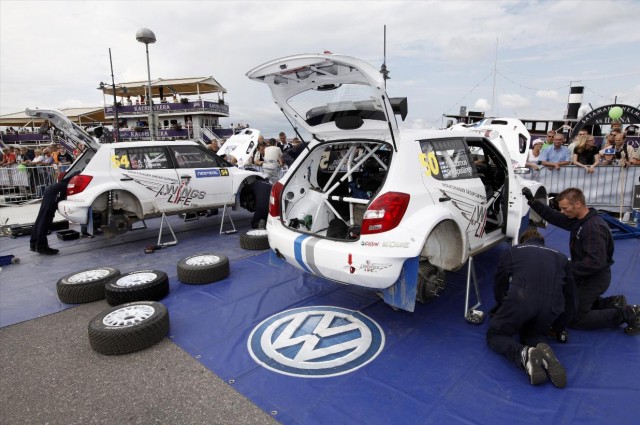 Strange as it sounds, Volkswagen took part in its first rally with a pair of Skoda Fabias. The build-up to VW's full assault on the 2013 World Rally Championship got off to a start on Rally Finland where the Fabia S2000 cars were used to put the team through its paces.

Volkswagen Motorsport competed with Finnish and Norwegian drivers, but both cars failed to make it to the finish. Finn Joonas Lindroos rolled his car on the eighth stage, while his Norwegian team mate Andreas Mikkelsen suffered a breakdown when a stone damaged his car's radiator on the 17th stage.

Kris Nissen, VW Motorsport Director, said: "Despite the two retirements the rally was a successful start for the entire team. The service crews did an excellent job during their first event and the procedures functioned very well, so my thanks to the whole team.

"The driver pairings also did a great job. Andreas Mikkelsen and his co-driver Ola Floene were particularly impressive and showed flashes of brilliance. In general, we collected valuable experience during this first rally weekend and learnt a great deal. We now look forward to competing in the ADAC Rally Germany in the middle of August."

Volkswagen Motorsport will compete in the WRC with its Polo R WRC. It has a 300hp 1.6-litre TSI engine and four-wheel drive, which comply with the new World Rally Championship rules that come into force in 2013.