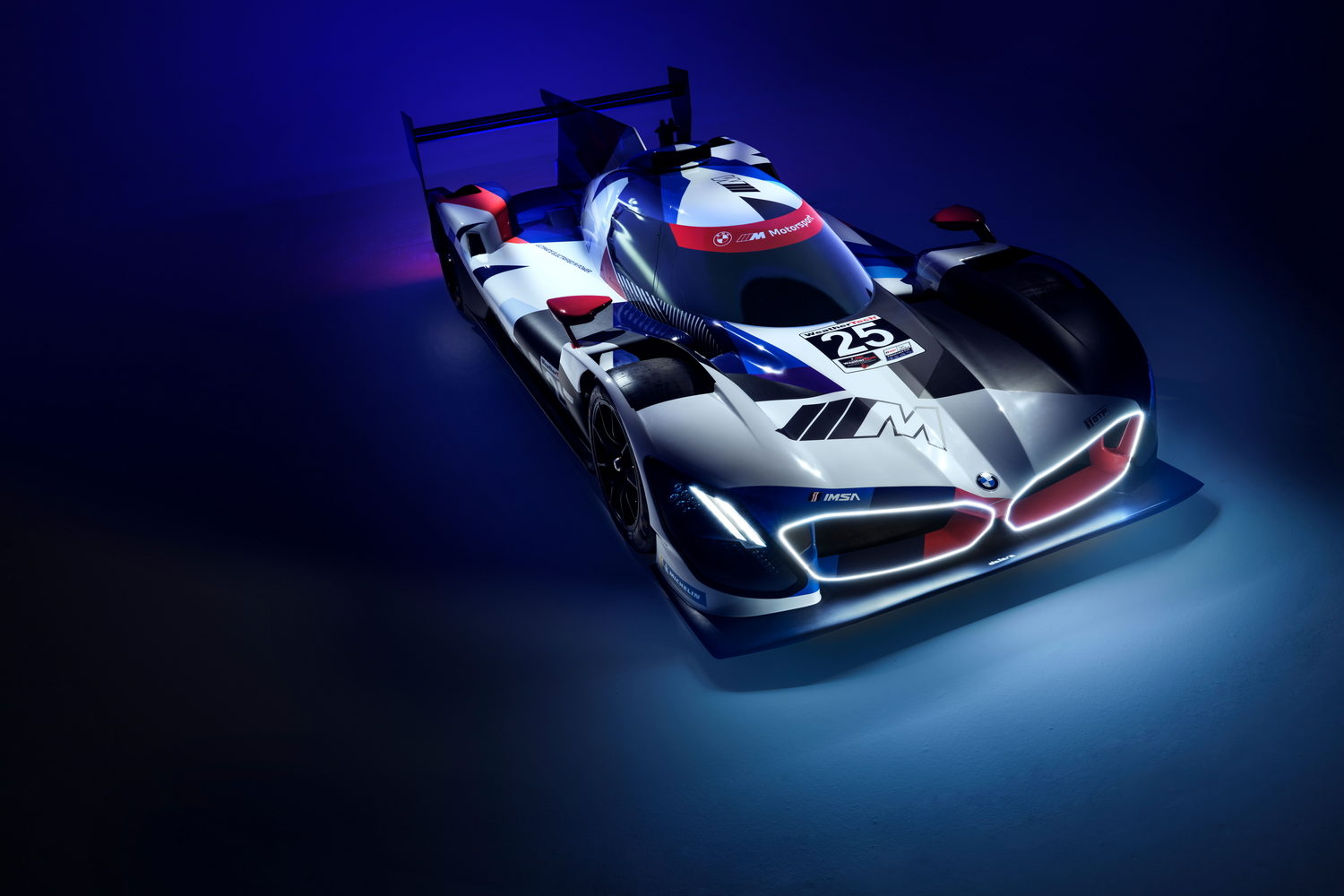 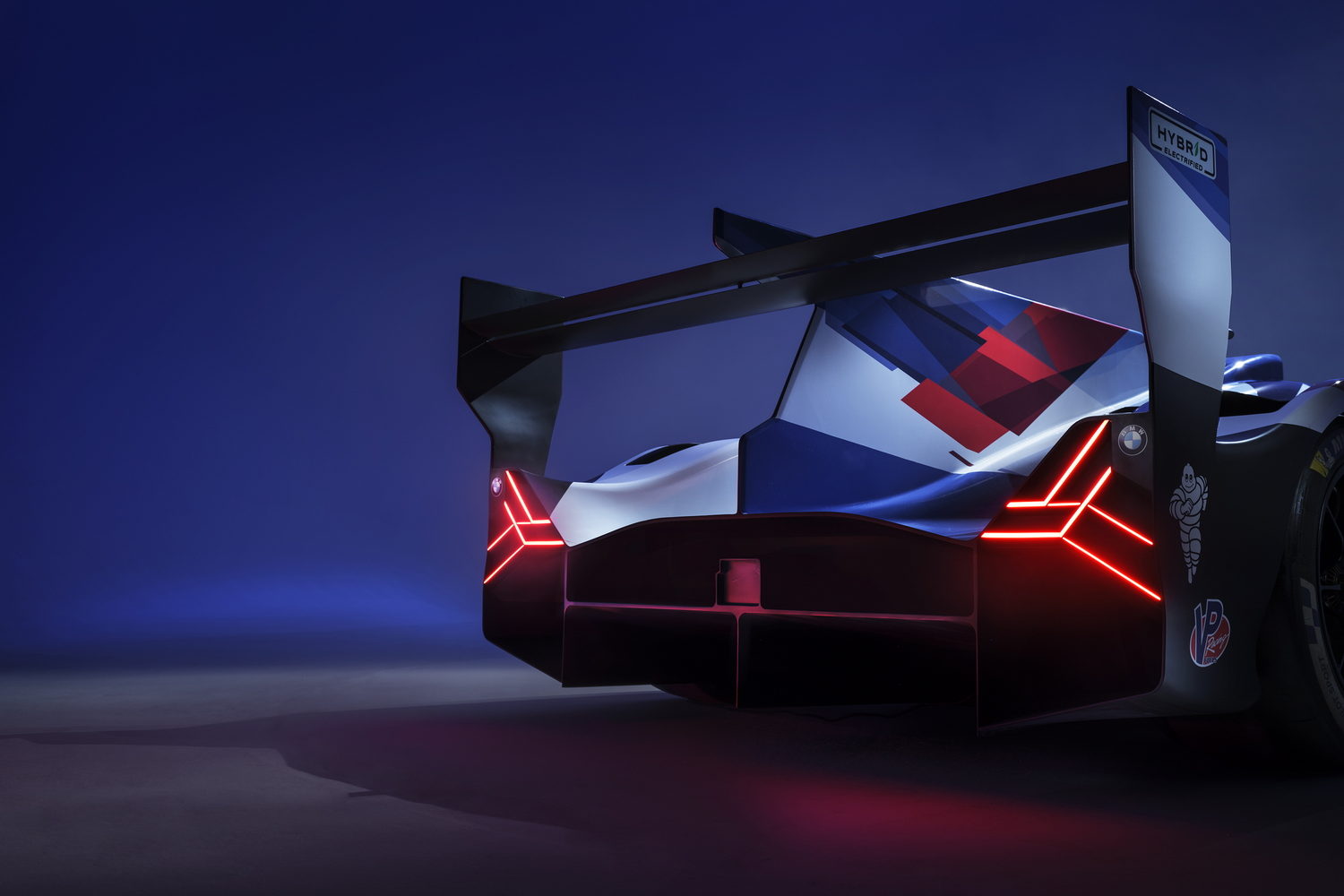 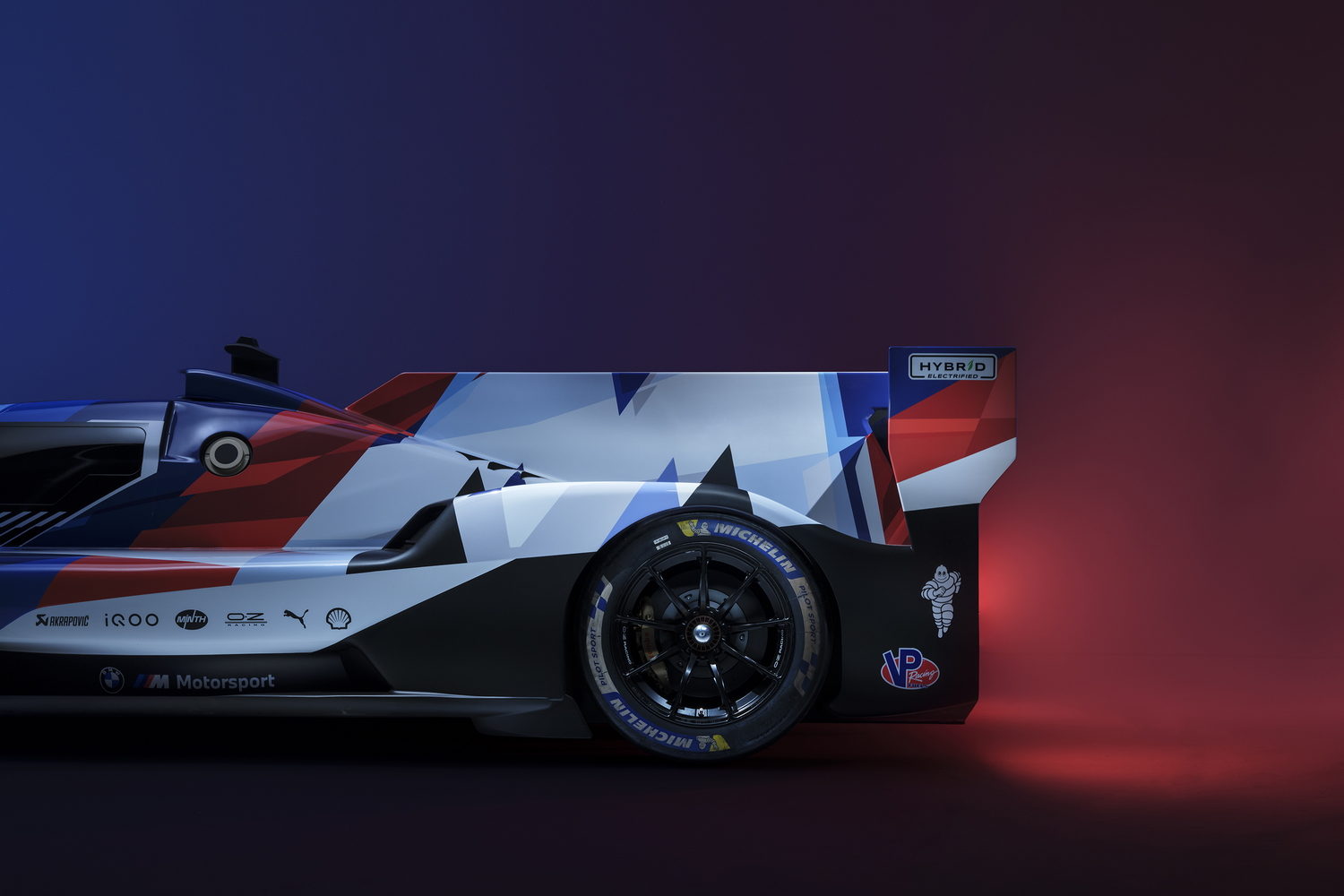 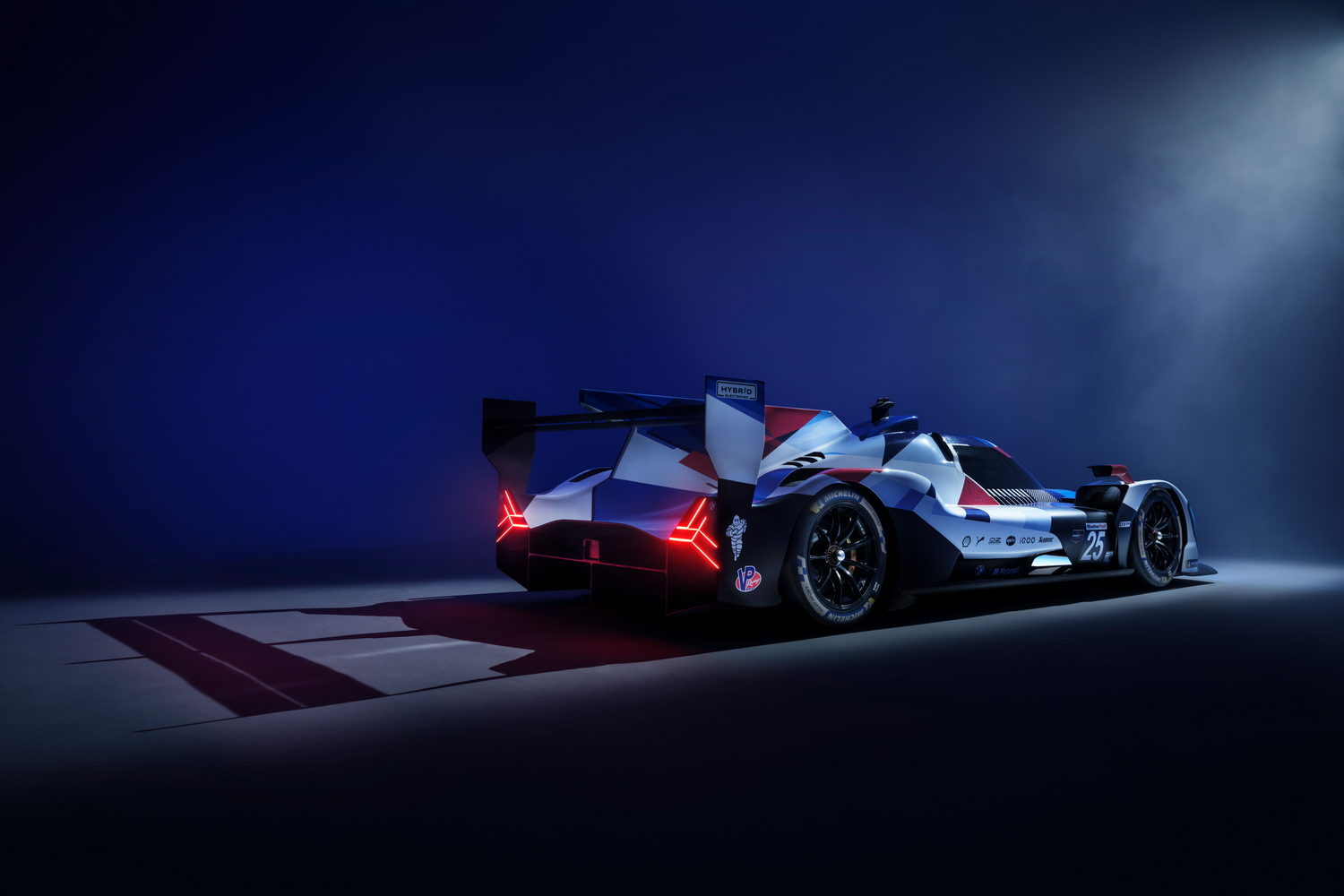 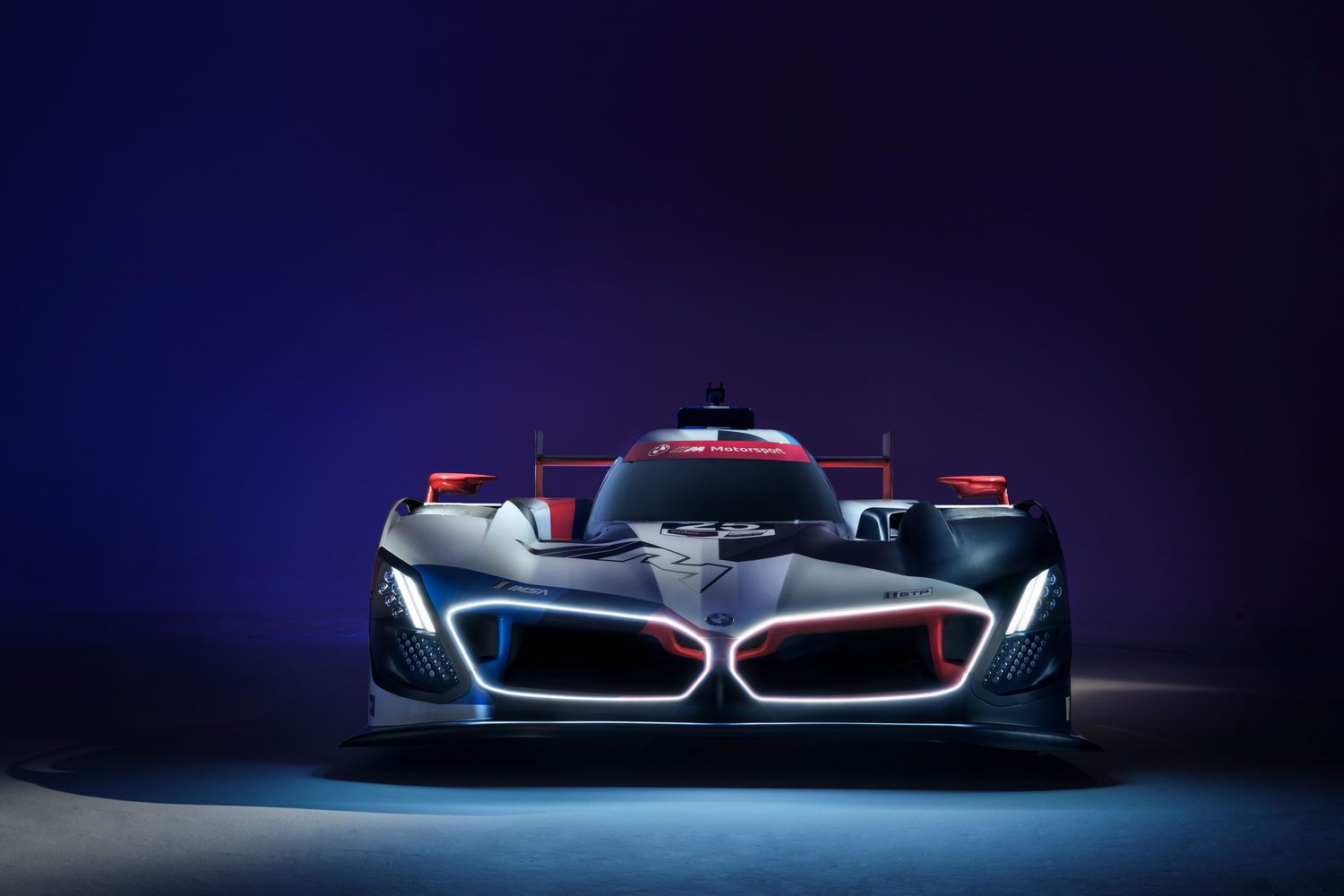 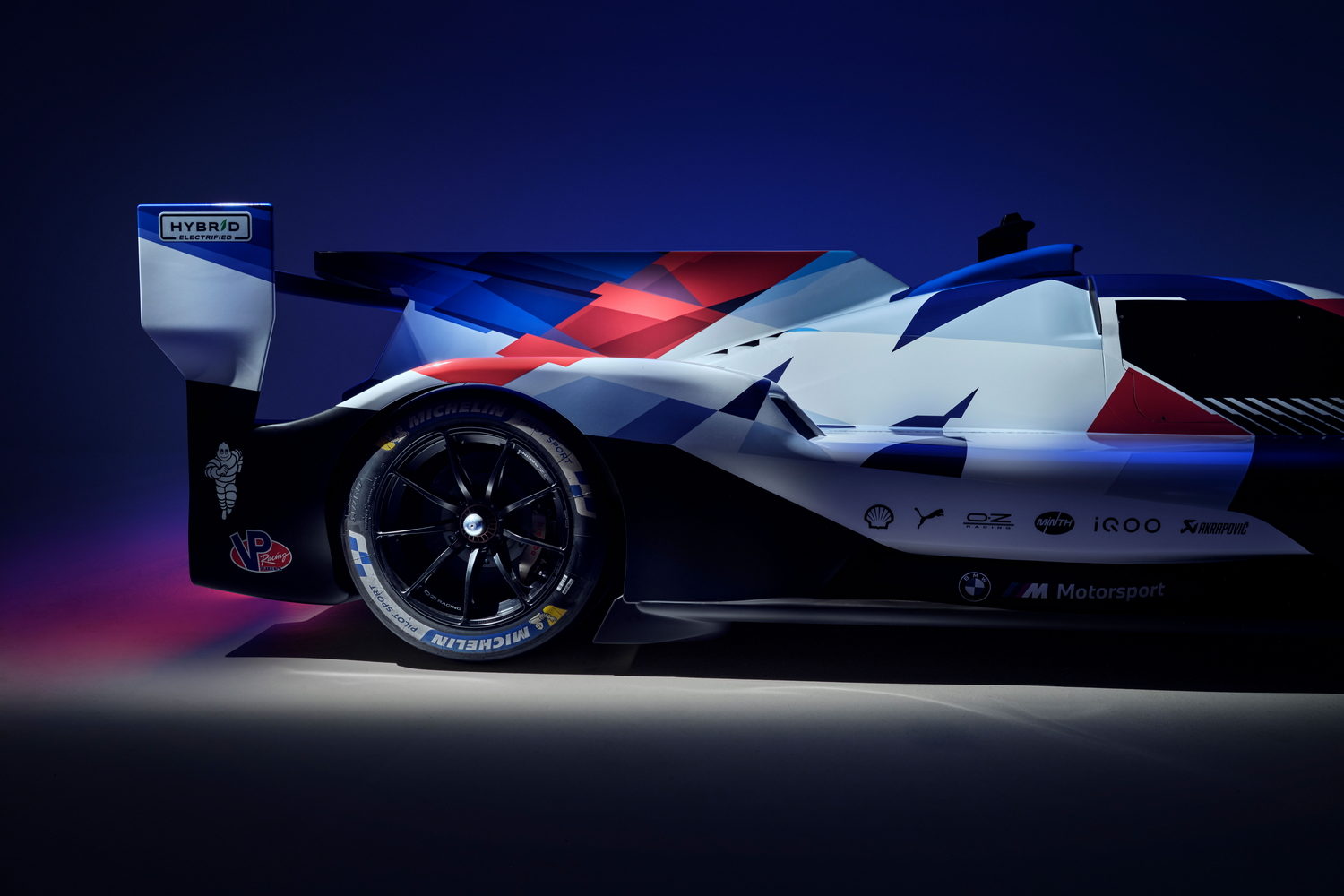 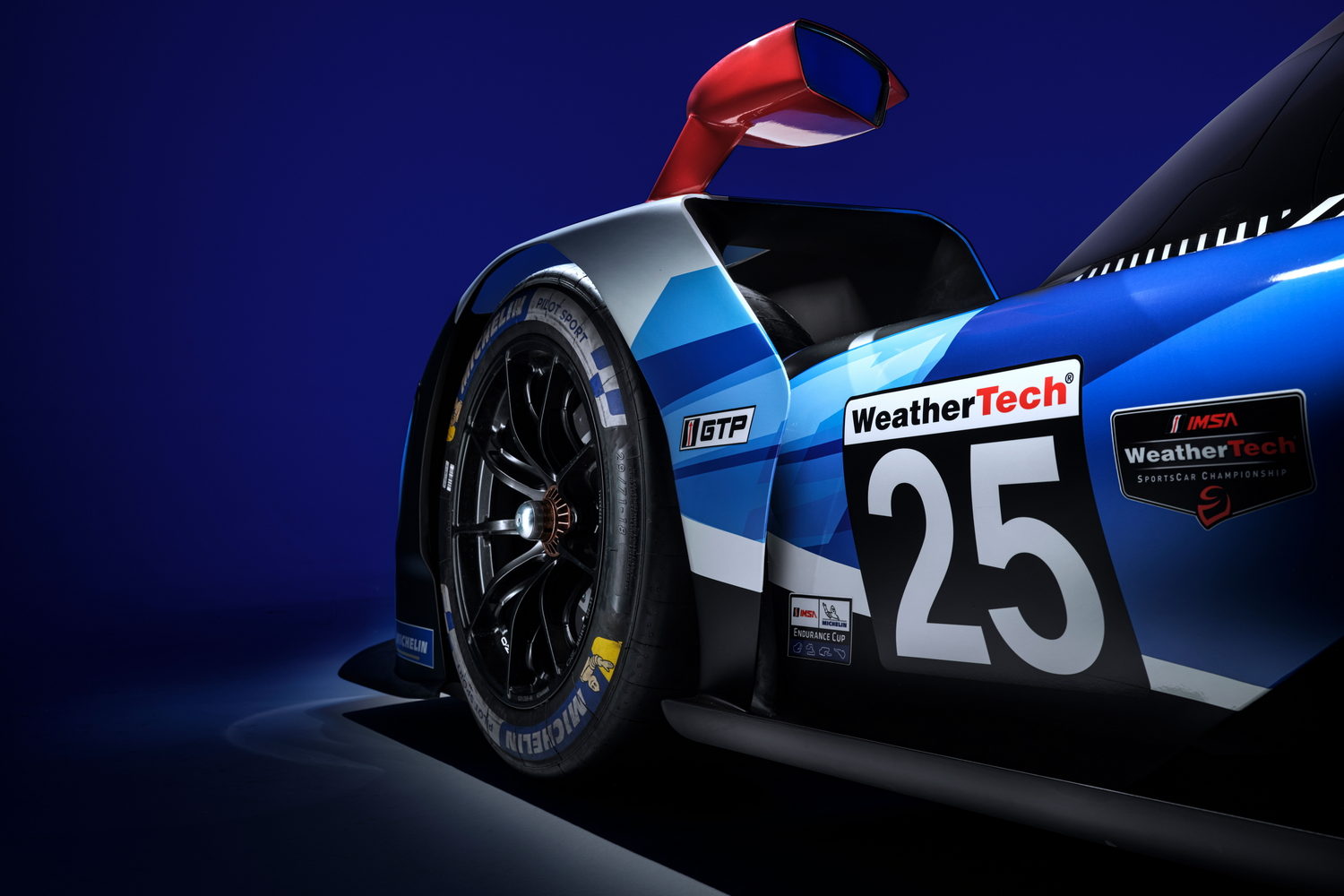 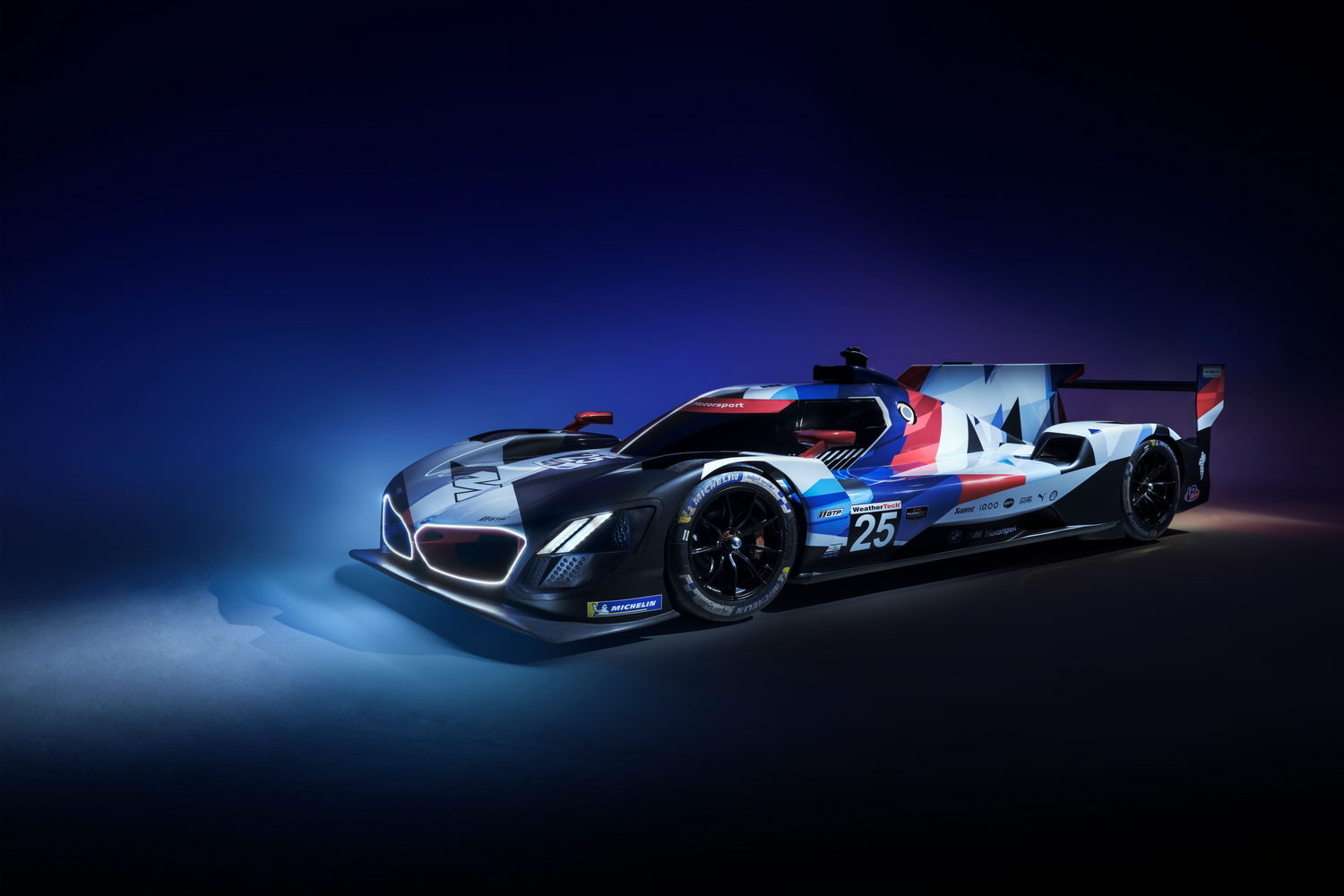 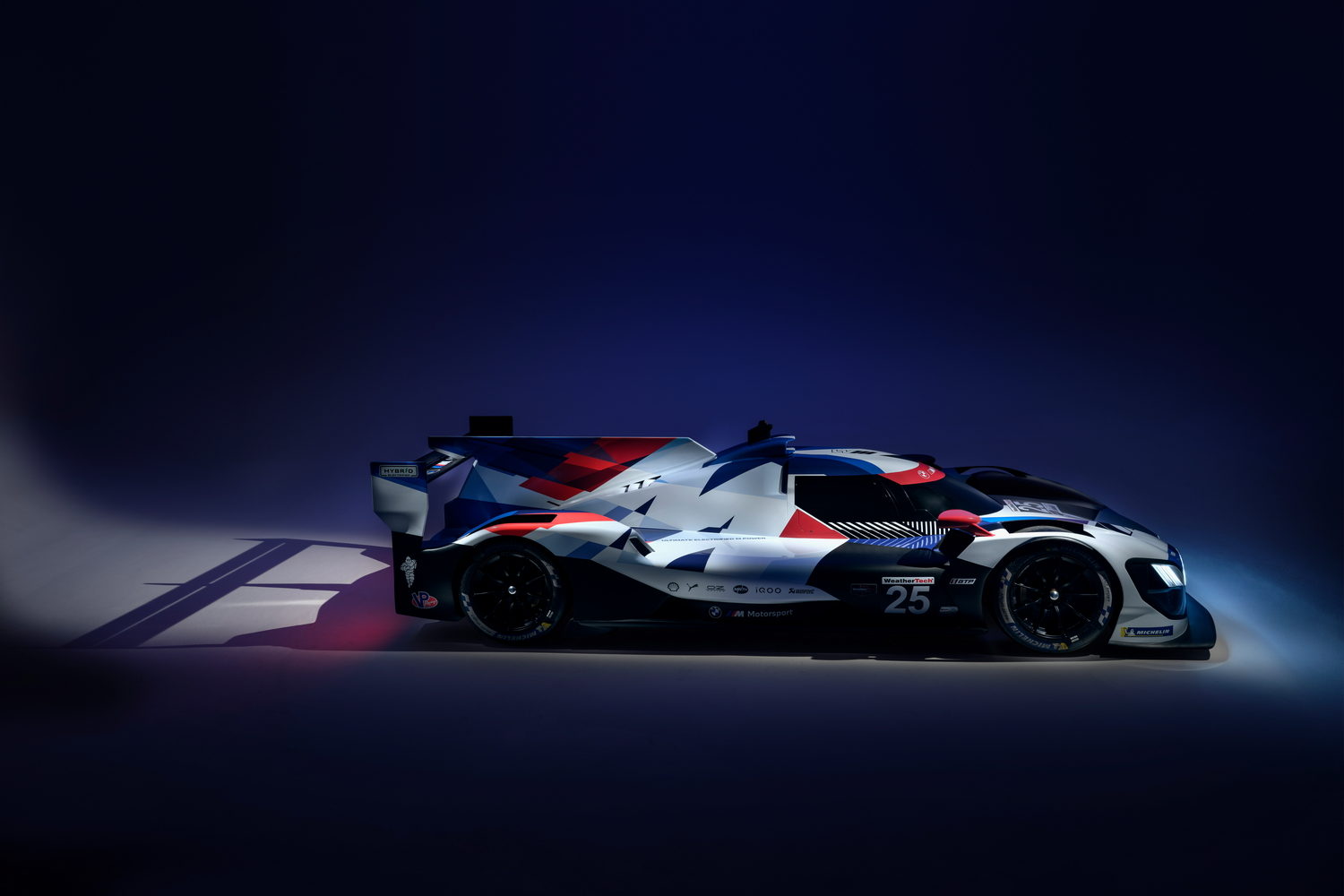 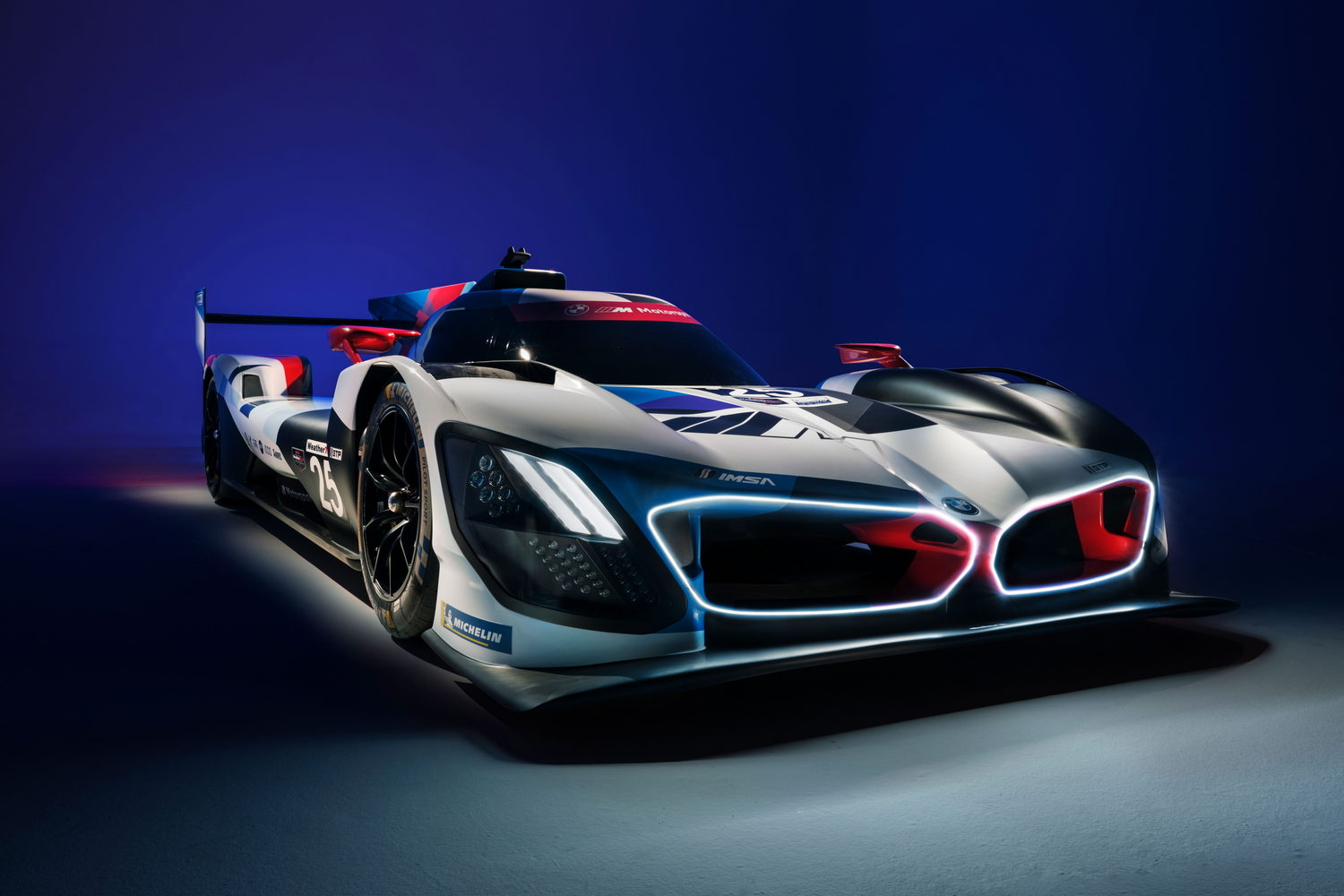 BMW M V8 Hybrid gets its war-paint on ahead of debut.

BMW has shown off its dramatic new M V8 Hybrid race car in its full colour scheme for the first time.

The new race car is BMW's first front-line prototype racer since the Le Mans-winning, V12-engined LMR racer of 1999. It has been designed to the new LMDh rules that will allow it to race both in the US-based IMSA championship and the World Endurance Championship, including the Le Mans 24 hours.

Four drivers announced, plus an extra

This version, being shown off at the Petersen car museum in Los Angeles, is the version that will race in the US, and it will be entered by BMW M Team RLL, owned by legendary IndyCar racer Bobby Rahal, TV star David Letterman and businessman Patrick Lanigan.

The four core drivers who will take their place at the wheel of the two BMW M Team RLL cars were also announced at the Petersen Museum. They are BMW M works drivers Connor De Phillippi, Philipp Eng, Augusto Farfus and Nick Yelloly. For the car's debut at the Daytona 24 hours in January, they will be joined by fast-rising IndyCar driver and F1 hopeful Colton Herta.

Head of BMW M, Franciscus van Meel said: "We are proud that, parallel to the 50th birthday of BMW M, we are returning to the big motorsport stage with the BMW M Hybrid V8. We are delighted that this adventure begins in North America, the most important international market for BMW M GmbH. After all, the BMW M Hybrid V8 is more than just a race car, it is paving the way for an electric future for BMW M, by emphatically demonstrating how dynamic and emotive electrified M Power can be."

IMSA president Andreas Roos said: "Being back in the top class of motorsport and battling for overall victories at such legendary races as Daytona, Sebring and Road Atlanta in 2023 is both a major challenge and huge motivation for everyone at BMW M Motorsport. We have worked very hard in recent months to get the BMW M Hybrid V8 ready for racing in a short time. Thank you to all our partners at Dallara, BMW M Team RLL, our development team RMG, and BMW Group Designworks for the fantastic support with assembling, developing and testing the car. And thank you to our sponsoring partners as well. Without their support it wouldn't be possible to run such a project. The BMW M Hybrid V8 is a beautiful race car. It is now our job to make it fast. We are working towards achieving this goal day by day, and are confident that we will be ready in January when we really get down to business for the first time at Daytona."

Bobby Rahal said: "There is no doubt that we understand and appreciate the level of commitment and dedication it will take on the part of RLL to be successful in this new venture. BMW M Motorsport is providing us with a great car, great engine and great driver line-up, of which we are very pleased. We understand the scope of the challenge in front of us and look forward to meeting it head on. As has been the case before, the level of collaboration and teamwork has been tremendous. Being in at the ground floor certainly gives our personnel good insight into the car from the beginning. I've learned long ago that you temper your expectations. Yes, you have hopes and you know you will be ultimately successful, but, as with any new car programme there are unforeseen circumstances that can work in your favour or work against you. For RLL, it's a matter of being prepared for either."

The M V8 Hybrid began testing this week at the famed Sebring racetrack in Florida, but the presentation at the Petersen was the first chance to see it in its full racing colours. The colour scheme has been developed by BMW's Designworks styling studio, and uses "a future-facing coat of arms comprised of modern, bold, fractal blocks of the iconic M colours and the M logo."

The scheme was led by BMW designer Michael Scully who said: "These elements have been deconstructed to form what at first might appear to be an abstract triangular pattern across the BMW M Hybrid V8, but when viewed from the side, the M logo clicks right into place. M reconstructed, if you will."

The design isn't just design, though. The black areas of the livery are just plain, naked carbon-fibre, which Scully says allows the team to save as much as 30 per cent compared to traditional paints and wraps.

Obviously, the most striking aspect of the car is the massive BMW grille, set into the nose and ringed by lights. This is a key aspect of the LMDh rules, as they were specifically set out to make the cars more affordable to build (all LMDh cars are based on a common chassis design, built by one of four companies - Multimatic, Oreca, Dallara or Ligier. BMW is using a Dallara chassis with its own V8 hybrid engine, a 4.0-litre unit developing 680hp in concert with its electric motor) and so that car makers could incorporate road-car design elements without compromising the aerodynamic efficiency. If you look closely, there's even a 'Hofmeister Kink' - the shape BMW has traditionally used for the rear pillars of its cars - designed into the cockpit windows.

For the 2023 IMSA season the two BMW M Hybrid V8 cars will have start numbers 24 and 25 at all of the season's races. De Phillippi and Yelloly will form one pairing, with Eng and Farfus teaming up in the other. They will receive support at the four IMSA endurance races at Daytona, Sebring, Watkins Glen and Road Atlanta (all in the USA). One man who will be involved in the 24 Hours of Daytona is IndyCar driver Colton Herta. He is one of the stars of the American racing scene and celebrated victory at Daytona together with BMW M Team RLL in 2019 - with the BMW M8 GTE in the GTLM class. The remaining endurance drivers will be announced at a later date.

"Since the GTP project was announced, it has been a dream of mine to be part of the programme. I know we are all eager to deliver championship results for BMW M Motorsport at the top level of IMSA competition," said De Phillippi. "It is an honour for me to have been given this unique opportunity."

Eng said: "I am really looking forward to the challenge and am grateful to BMW M Motorsport for the trust they have put in me. I will never forget my first laps in the BMW M Hybrid V8. It is a thoroughbred race car with a huge amount of performance and power. It reminds me of the Class 1 cars in the DTM. It will be great fun to drive it at the IMSA racetracks."

Yelloly: "After my first outings at Daytona and Sebring, it is fantastic to now contest the full season in North America - and in this awesome car. For me, it is a return to my roots with high-downforce race cars. I am really looking forward to it."

Farfus said: "To represent BMW M Motorsport again at the top level, and to be involved in the start of this new era of motorsport, is a unique opportunity and a great honour for me. This exciting project is one of the highlights of my career. The opposition is very strong and we will learn a lot in our first year. However, I think we have everything in place to achieve good results from the start. We are definitely working hard to make that possible."