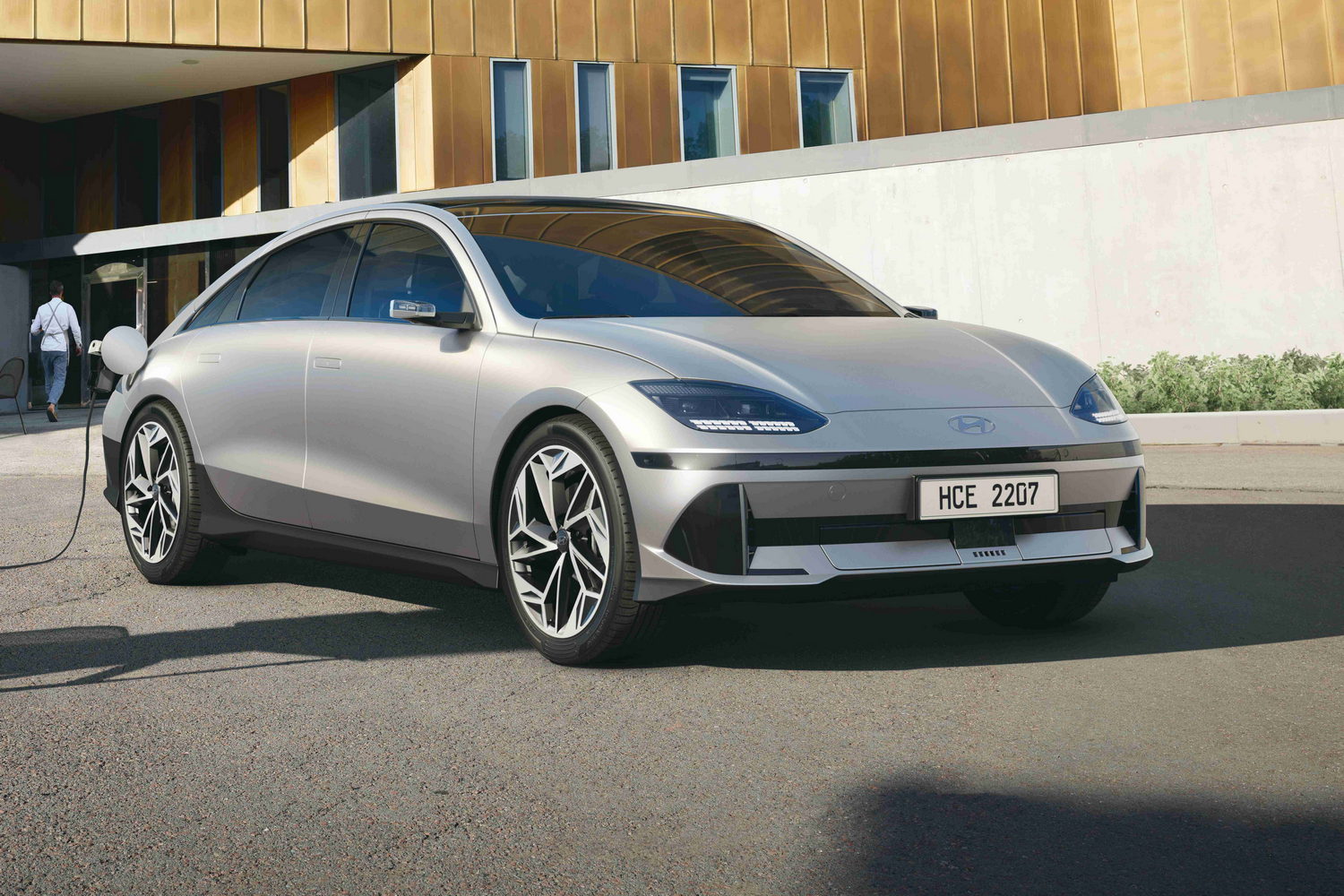 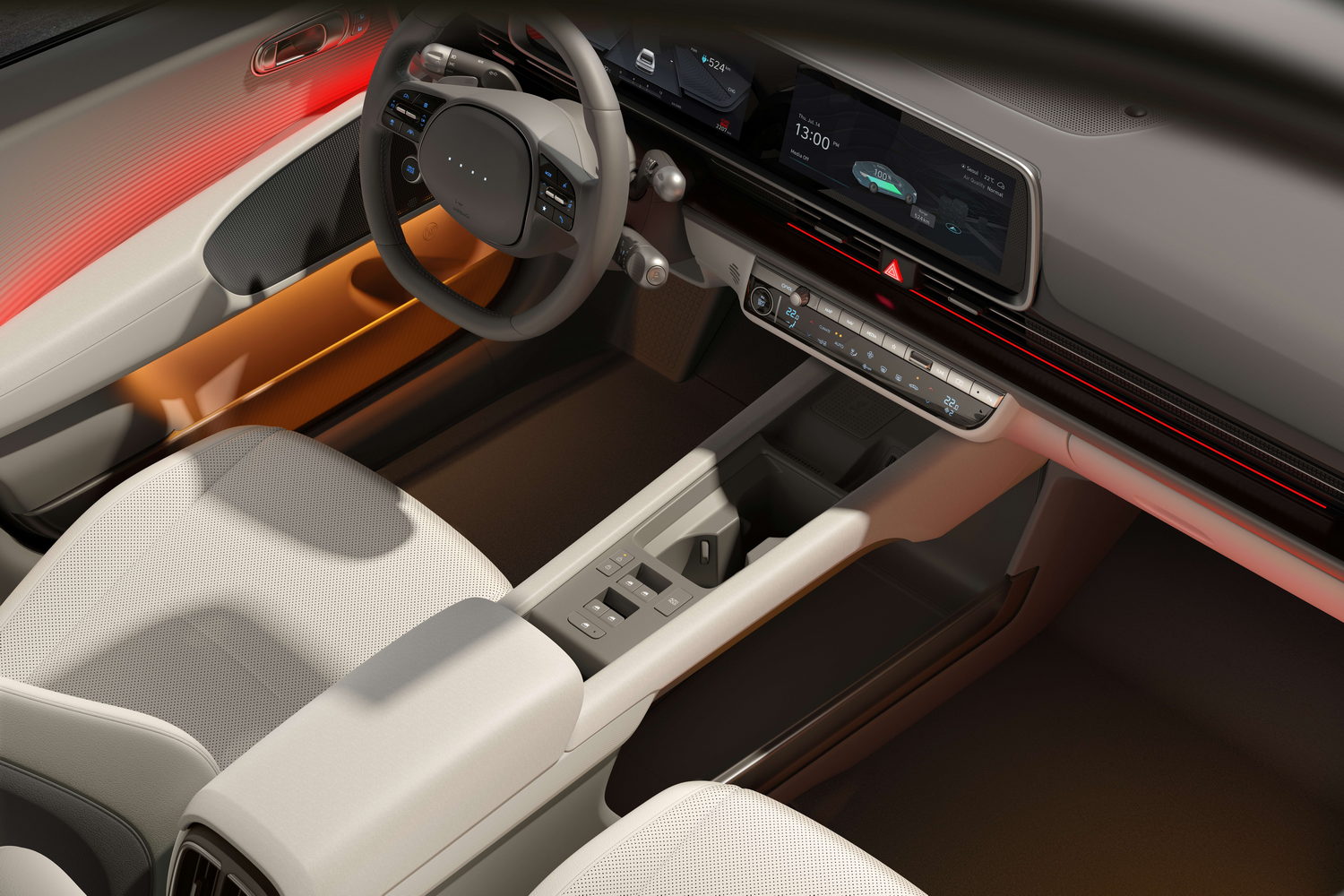 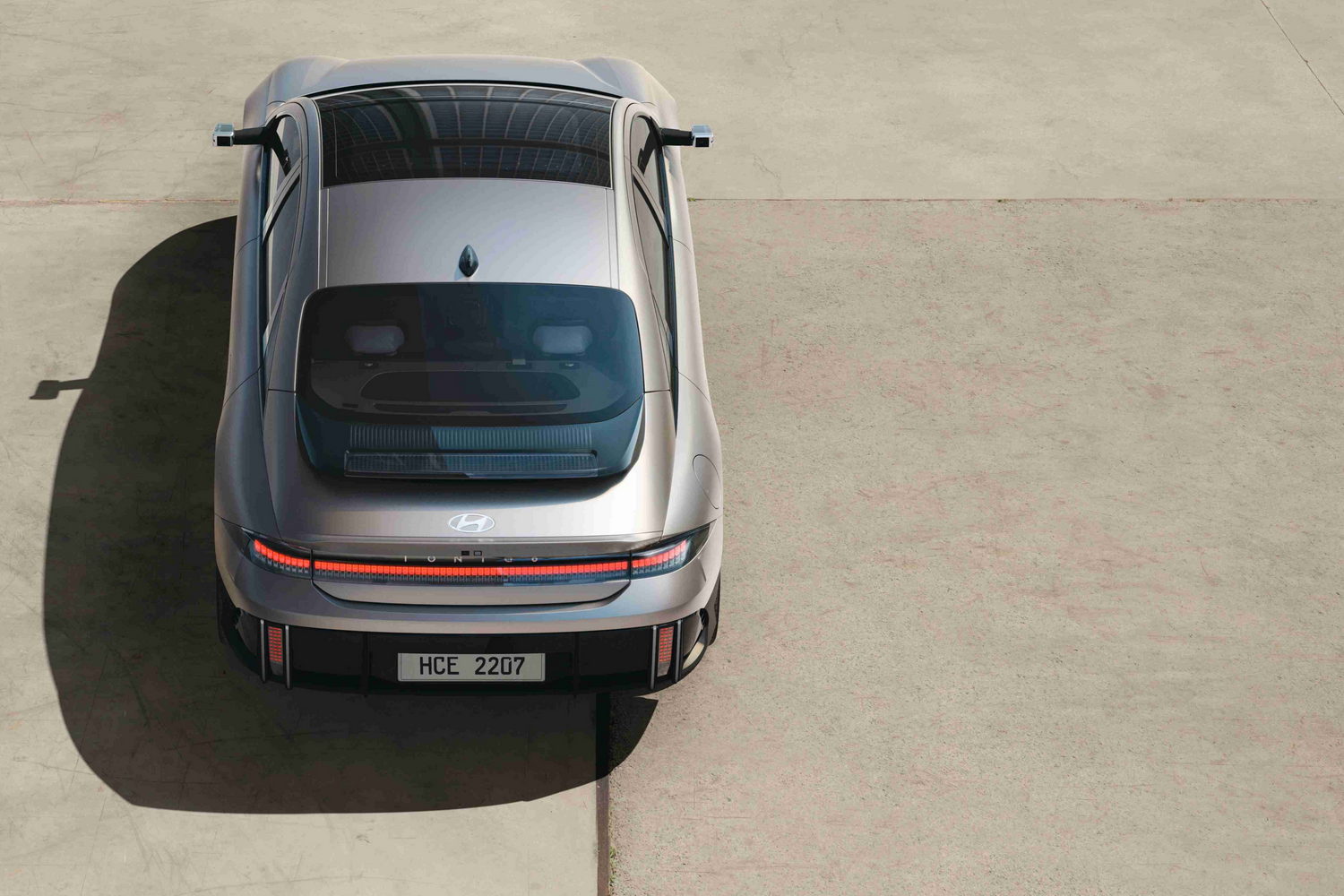 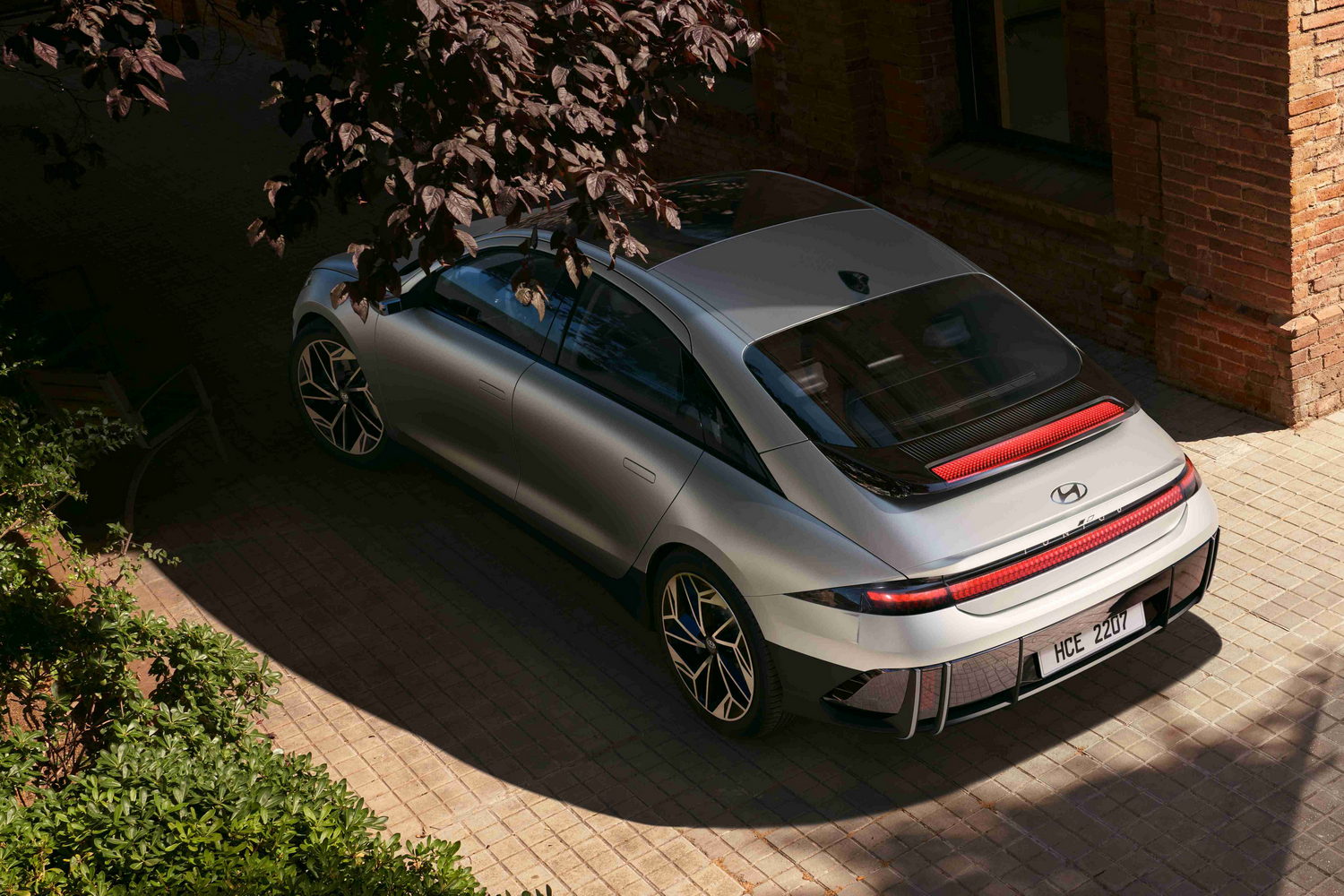 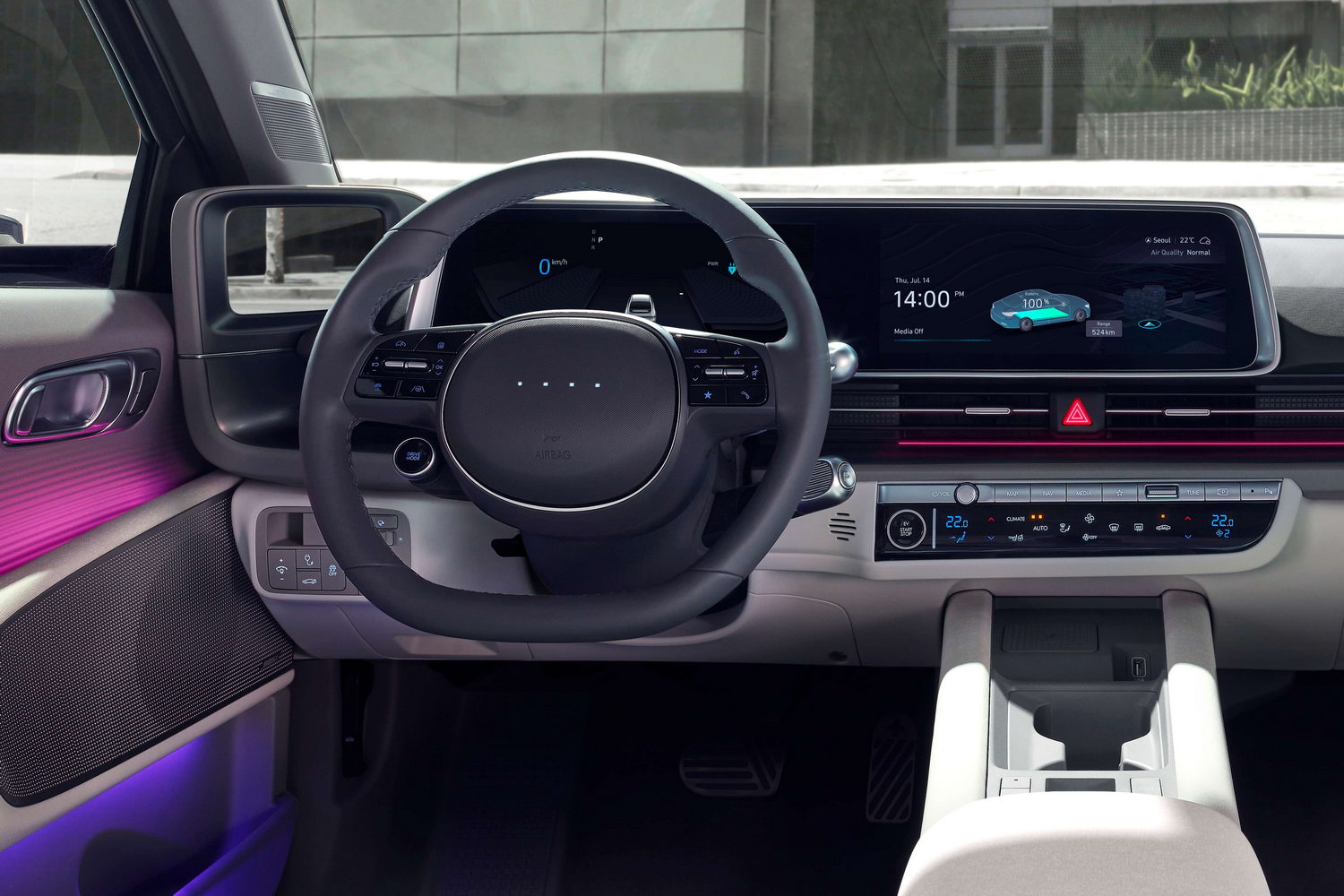 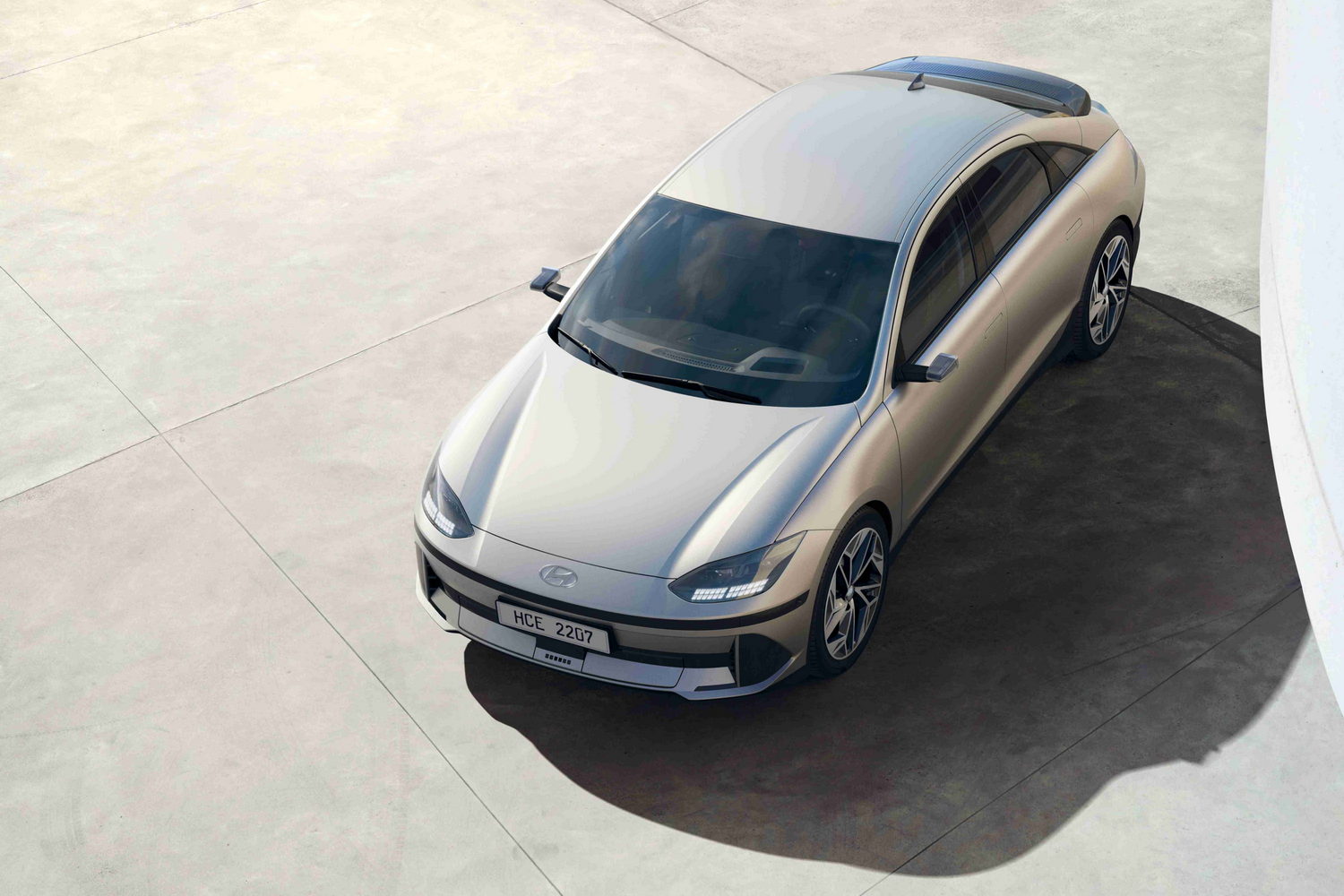 Hyundai reveals more of its Ioniq 6 EV, including range of up to 610km.

Hyundai has revealed more details of its "electrified streamliner", the Ioniq 6 EV, a sleek battery-powered saloon that was first unveiled last month.

The Ioniq 6 is the follow-up to the hugely successful Ioniq 5 and, when it arrives in Ireland next year, will be the second car from Hyundai's reinvented all-electric Ioniq sub-brand. Its designers say it has been inspired by streamlined cars of the 1930s, but it won't share the retro looks of the Ioniq 5. Nonetheless, it will share its modular E-GMP platform meaning that, as well as plenty of interior space, there'll also be a selection of electric motor and battery arrangements to choose from.

Electric range of up to 610 kilometres

Hyundai has confirmed that the top-of-the-line Ioniq 6 will feature a 77.4kWh battery pack and all-wheel drive with dual motors front and rear developing a total of 325hp. This should give the range-topper a 0-100km/h time of 5.1 seconds. Additionally, single-motor, rear-wheel-drive models will be available as will a version with a 53kWh battery to bring the price down.

Notable, partially thanks to the Ioniq 6's aerodynamics, is an energy consumption figure of just 14kWh/100km, which compares favourably with the likes of the ultra-efficient Mercedes EQS and EQE. This will, the company says, give the Ioniq 6 a range of up to 610km (in 77.4kWh models with rear-wheel drive and riding on 18-inch wheels). With 800-volt electrical architecture, battery top-ups from 10- to 80 per cent can be achieved in as little as 18 minutes at rapid 350kW DC chargers.

The Ioniq 5's vehicle-to-load system, which allows it to be used as a mobile power bank to charge other electronic devices, will be available in the Ioniq 6 too, with not just an exterior port, but also a socket under the back seats for charging laptops, phones, tablets and such like.

Once inside, the Ioniq 6 driver can adjust the weighting of the steering, the power output of the electric motor and the accelerator sensitivity via the 12.0-inch central touchscreen using the 'EV Performance Tune-up' system to best suit their driving preferences. There's also a system known as Electronic Active Sound Design that pipes a spaceship-like sound into the cabin, and which changes the texture of the sound based on the speed at which the car is being driven.

Also confirmed was a fairly standard array of driver assistance features including rear cross-traffic collision-avoidance assistance, blind-spot collision avoidance, side-exit assistance (to stop passengers opening the door into traffic), intelligent speed limit assistance (which reduces the car's speed depending on the speed limit) and smart adaptive cruise control that "learns" and mimics the driver's own driving style. Over-the-air updates to almost all the car's systems will be possible.

Hyundai has already confirmed that the next car in the Ioniq line-up will be a seven-seat SUV called, funnily enough, the Ioniq 7. Before that's unveiled in production format, however, details of the first high-performance N-badged Ioniq model will be revealed. It's expected to be the Ioniq 5 N, with all-wheel drive and performance to match the Kia EV6 GT.

When it arrives in Ireland, the Ioniq 6 appears to be poised to take on cars such as the Tesla Model 3, Polestar 2 and even the BMW i4. Production is due to begin in the third quarter of 2022. And while Irish pricing for the Hyundai Ioniq 6 has yet to be announced, Hyundai Ireland has confirmed that it should arrive in 2023 in time for the '232' registration plate change in July.