Mercedes-AMG One is a 1,063hp F1-inspired hybrid 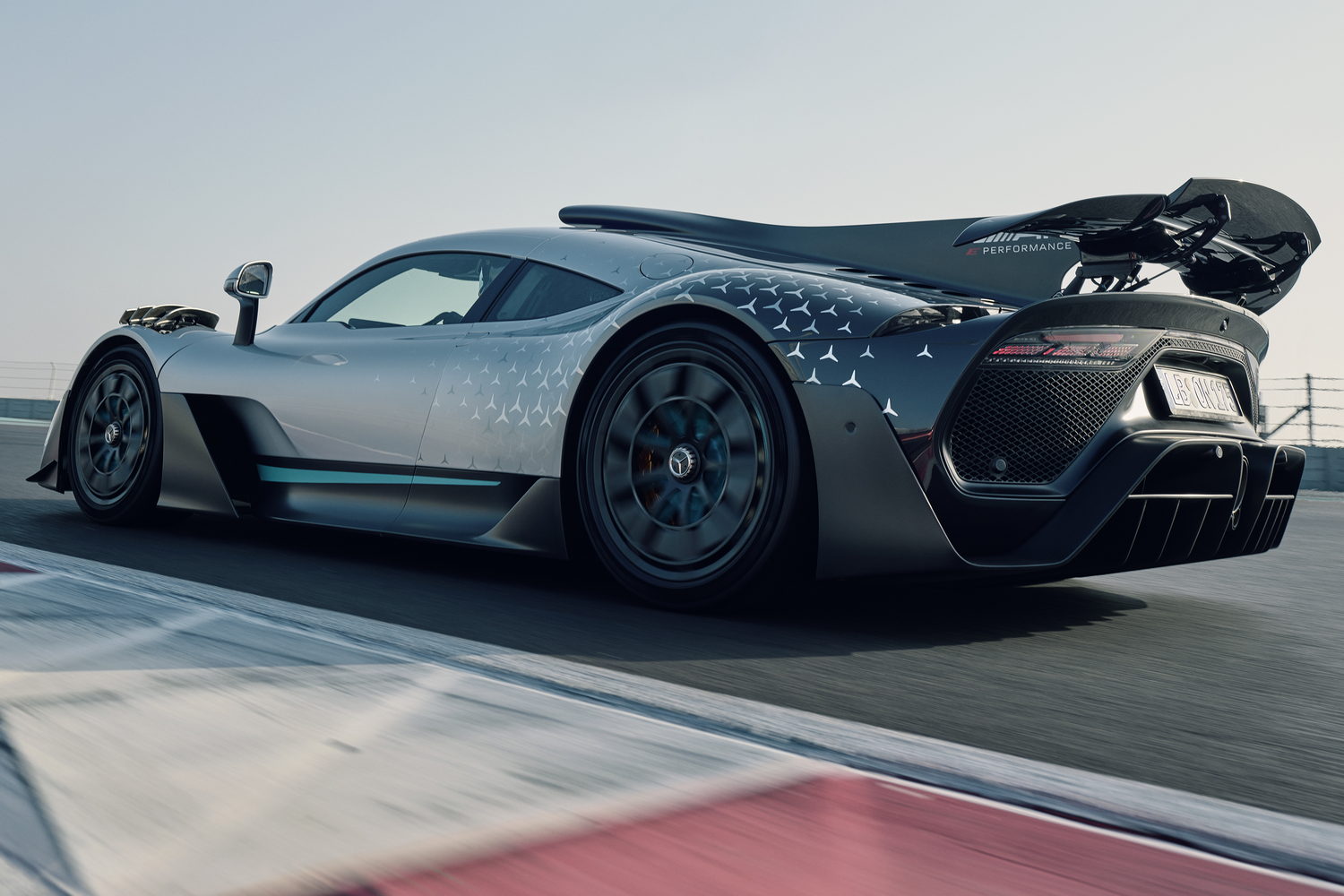 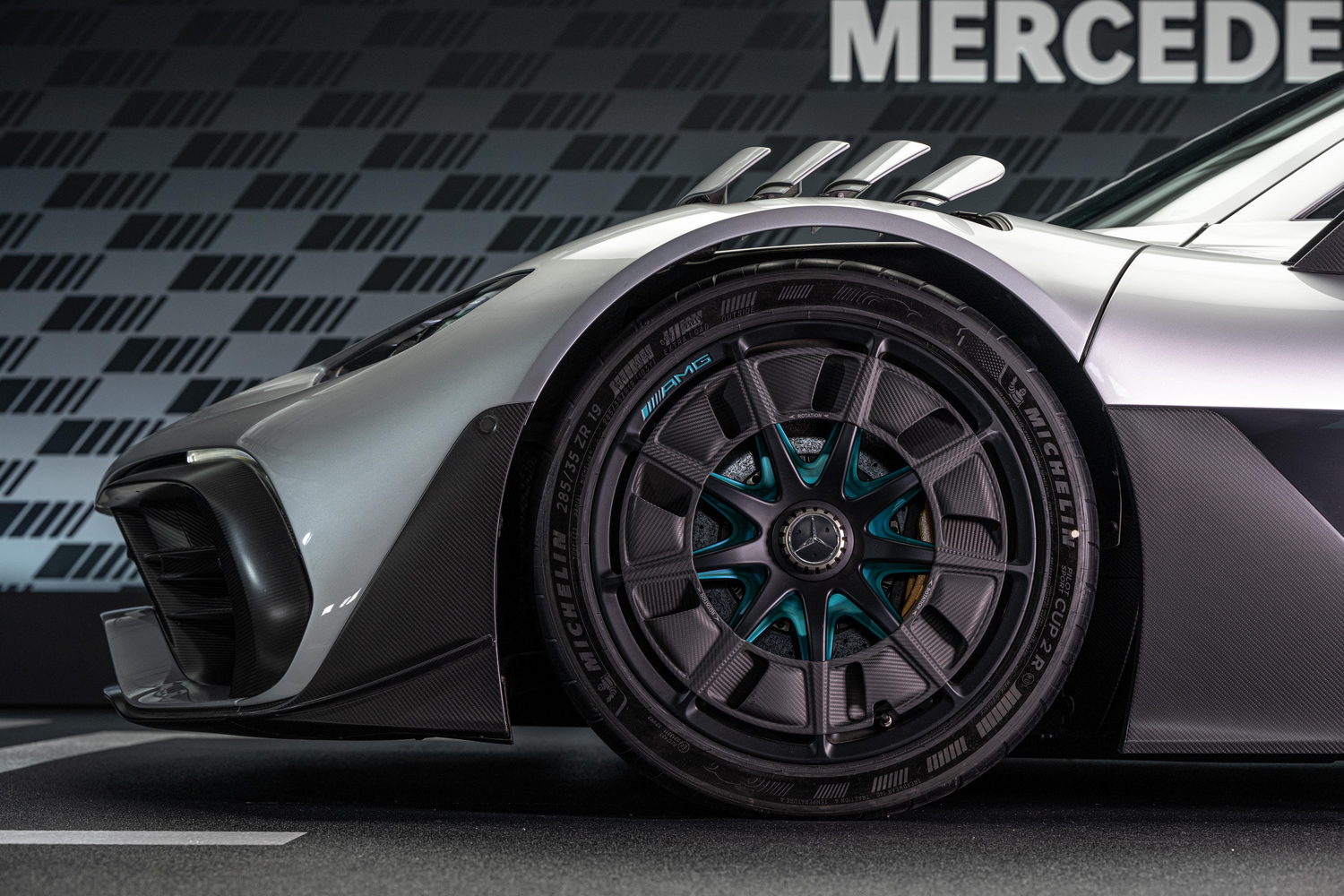 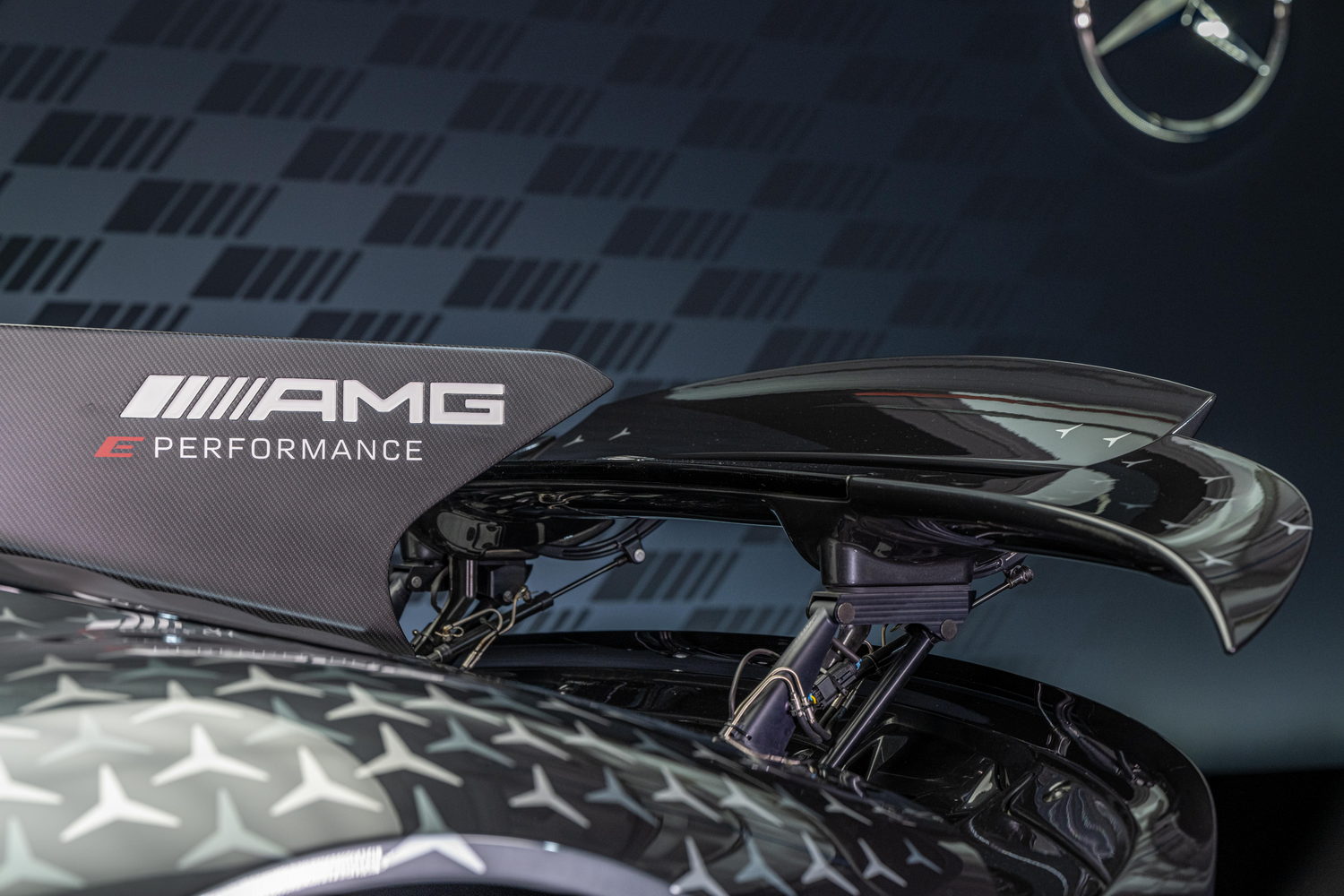 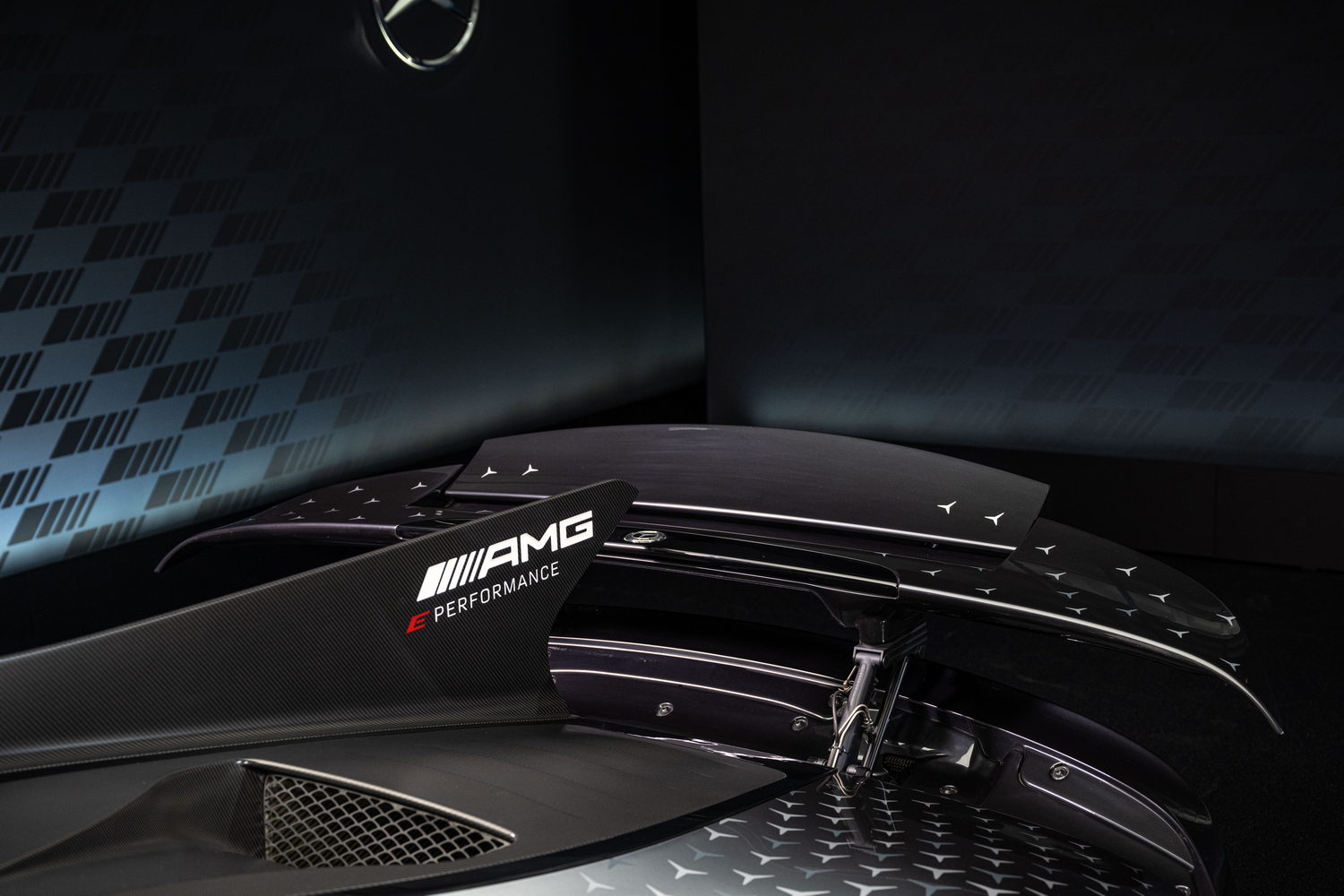 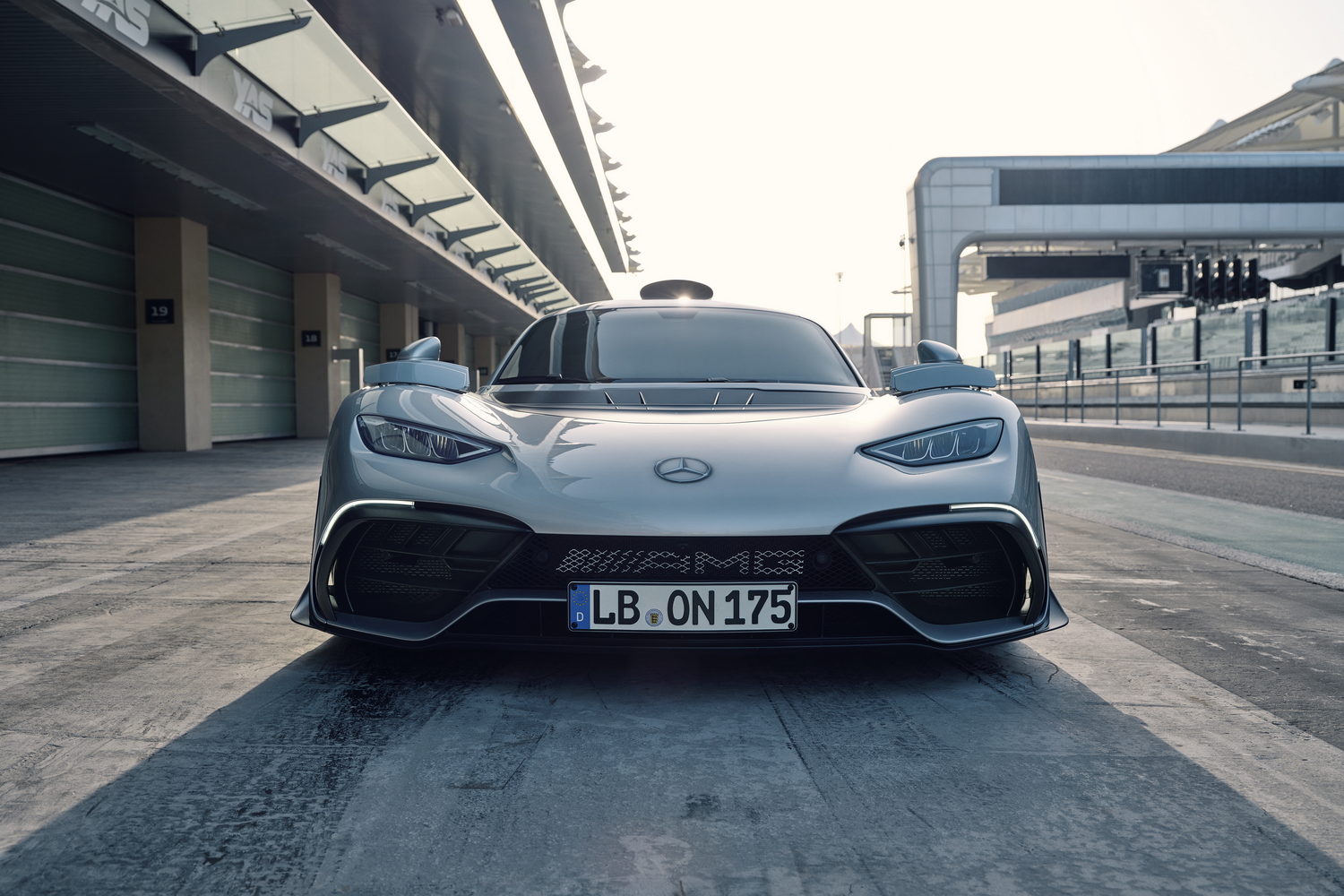 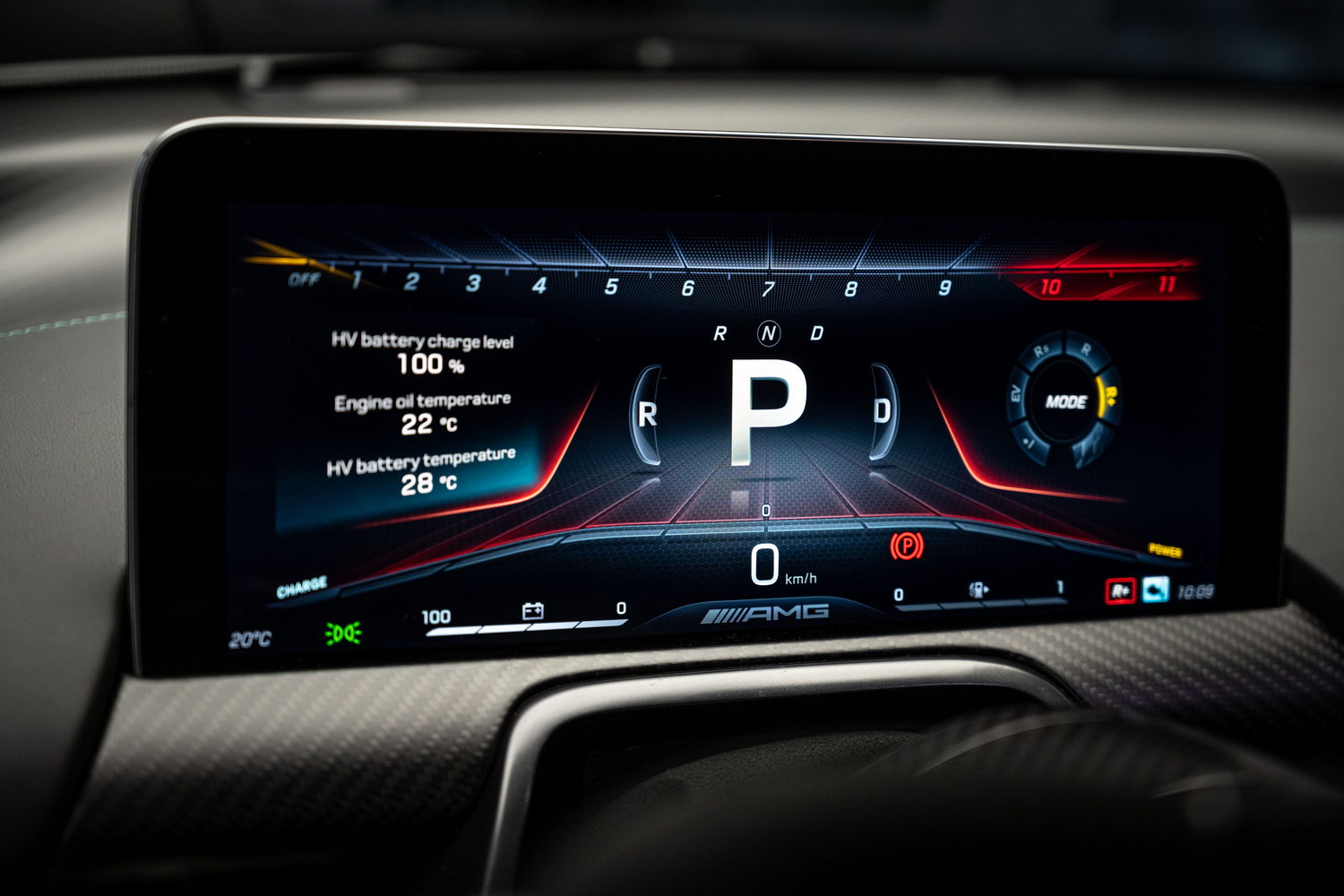 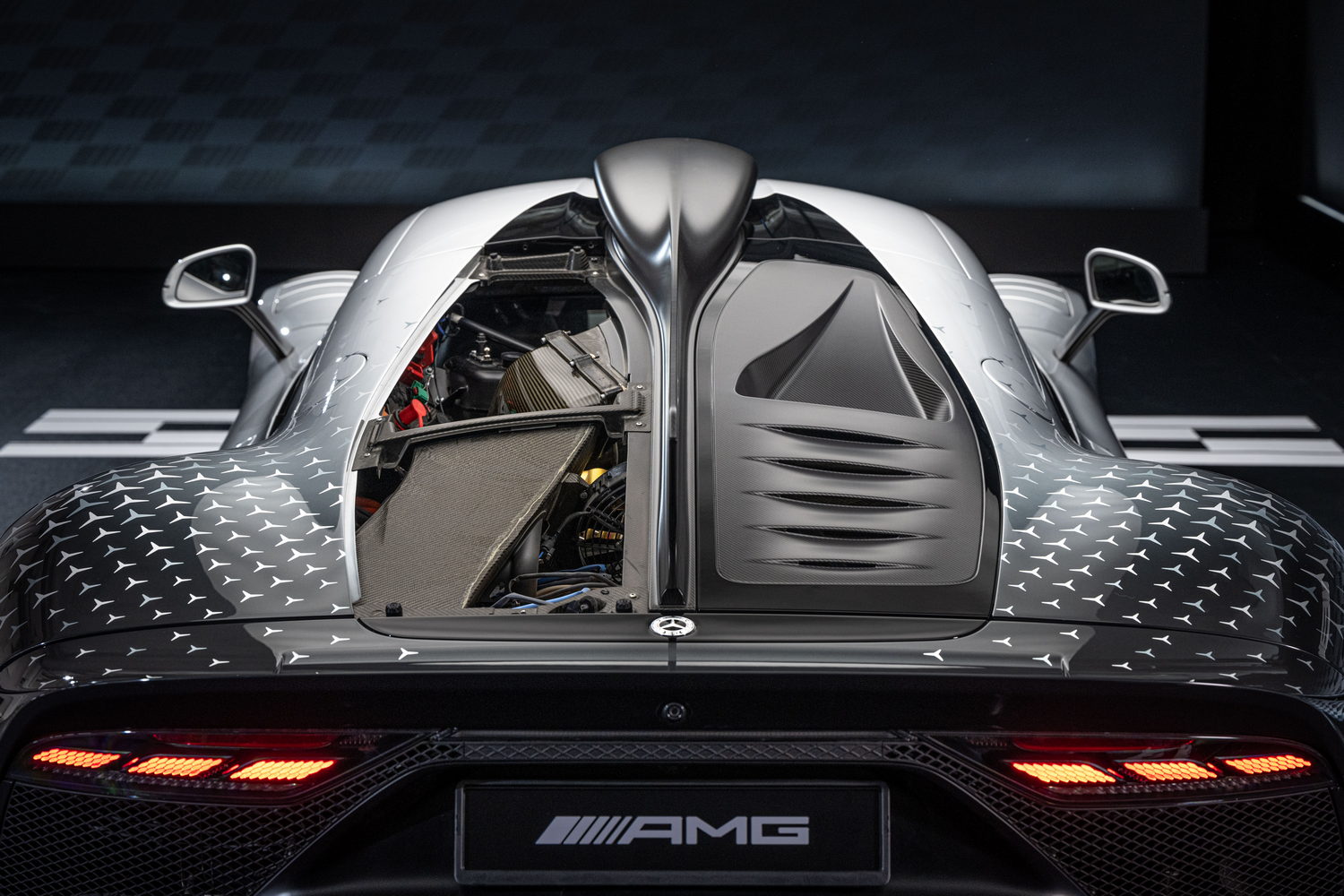 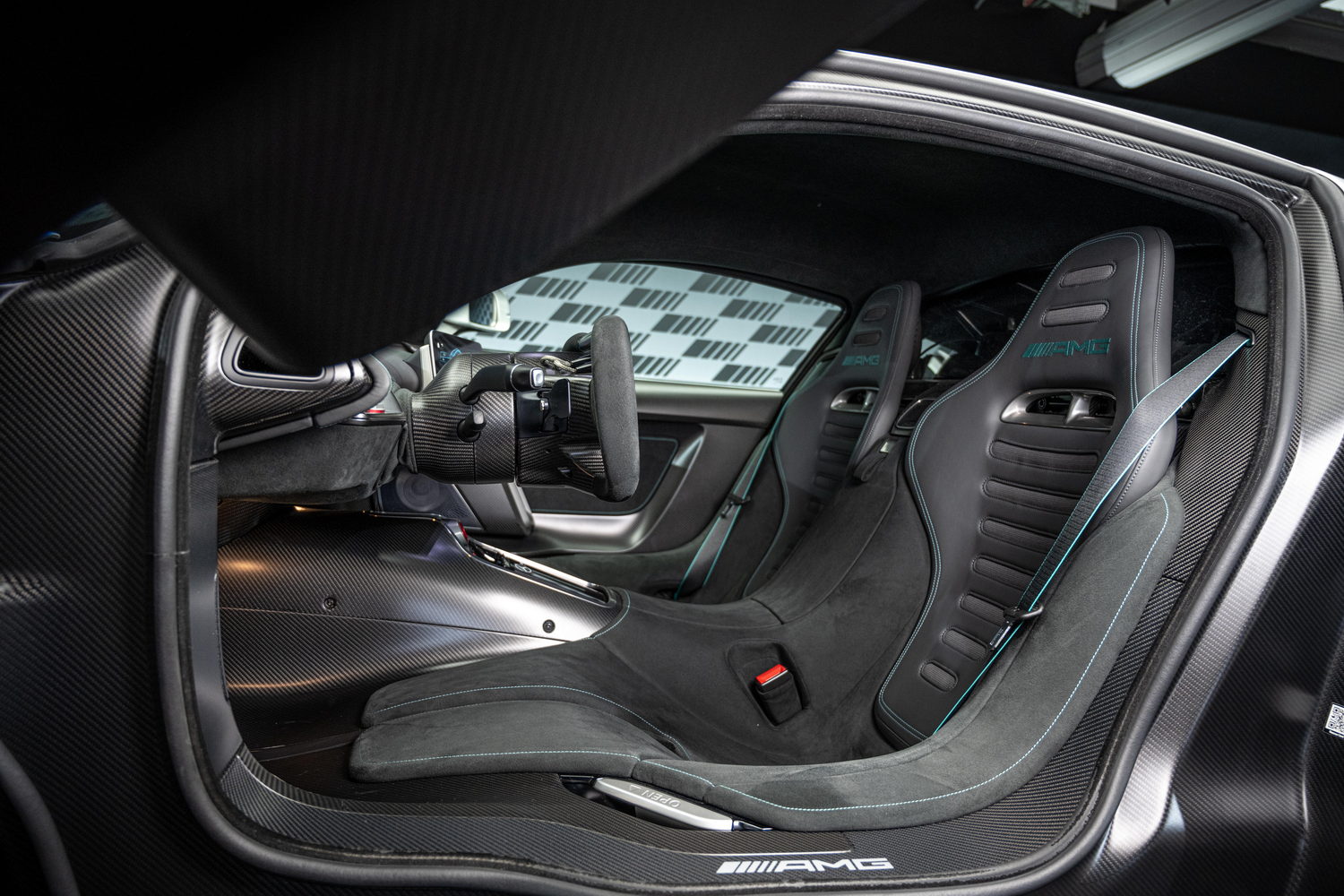 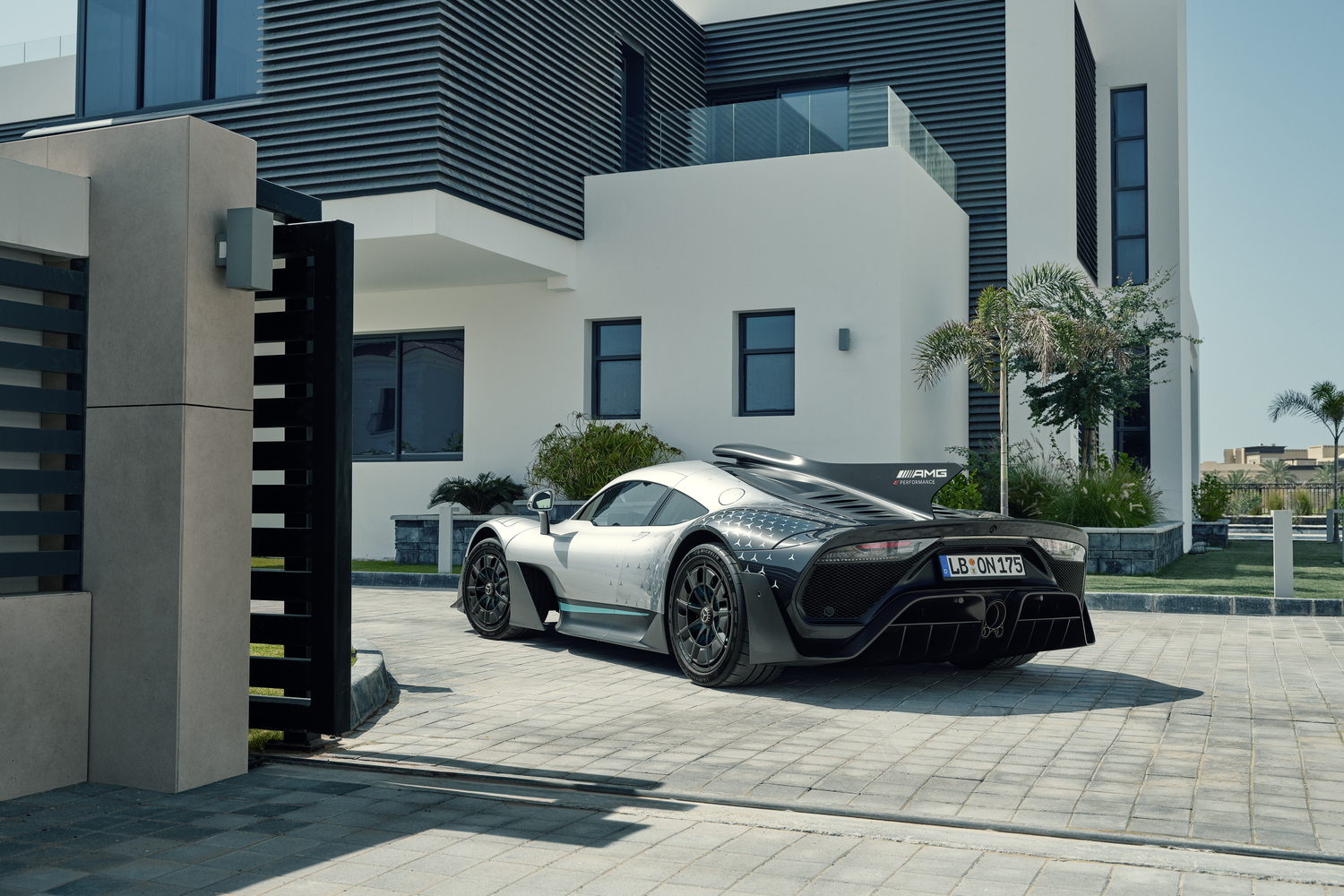 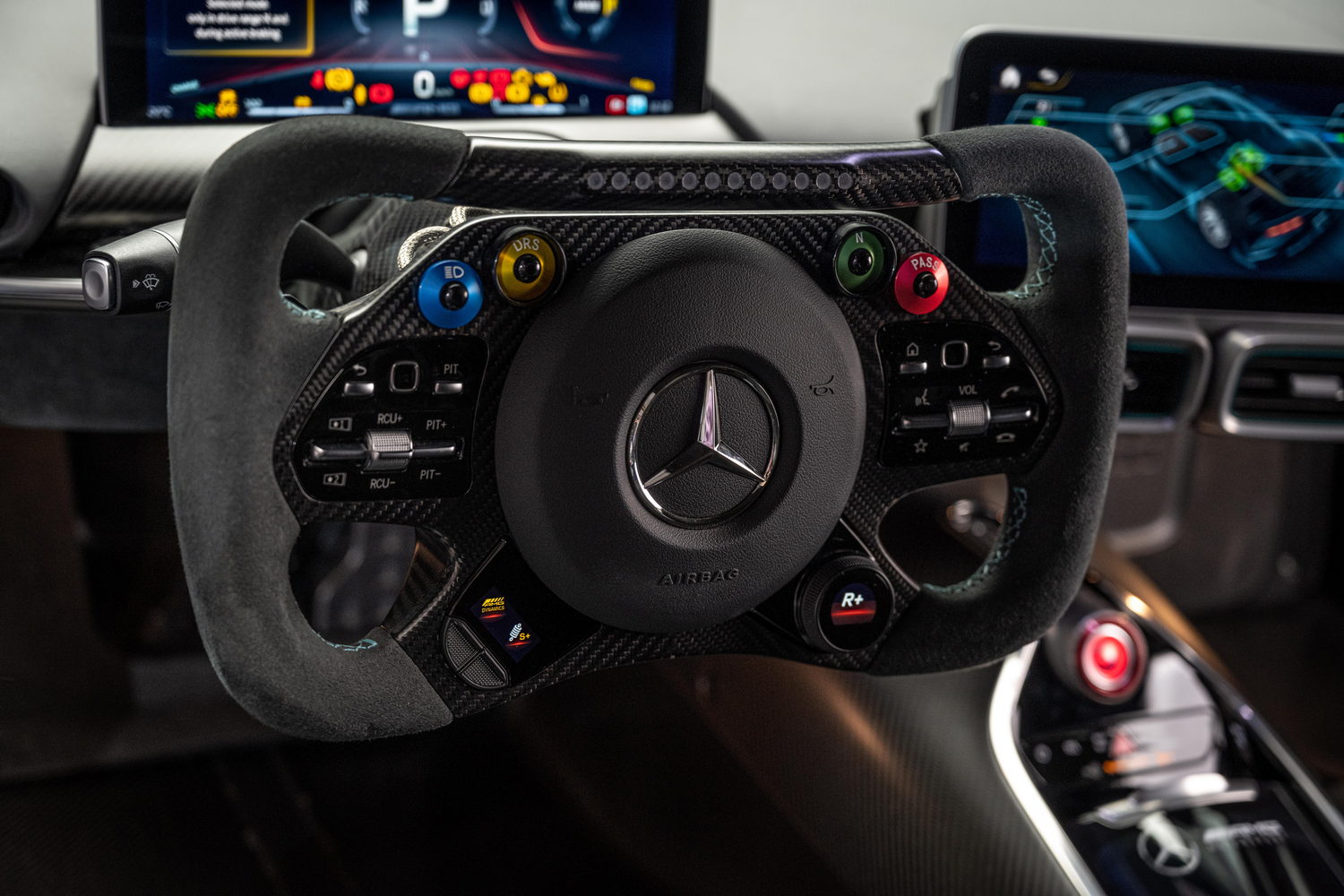 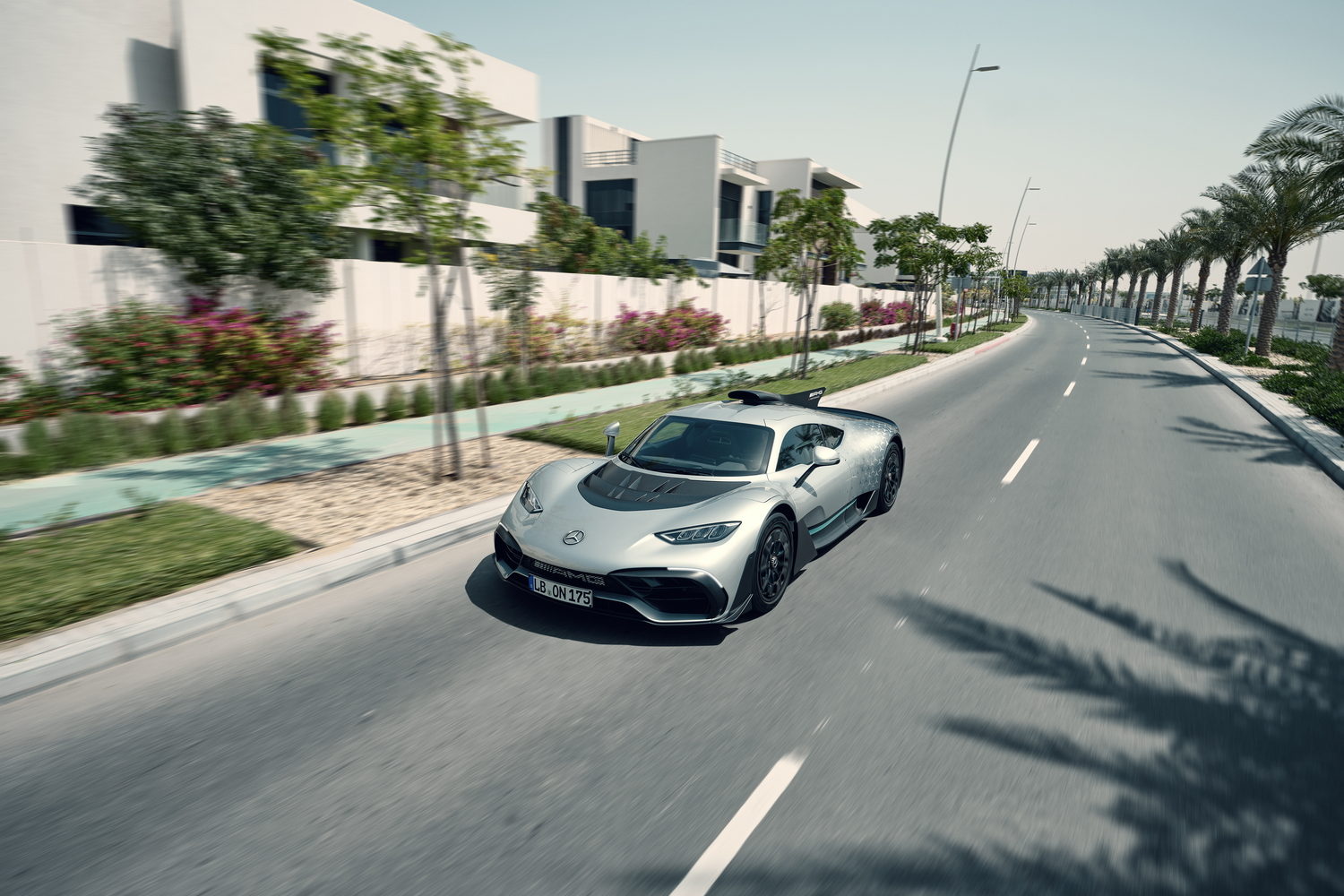 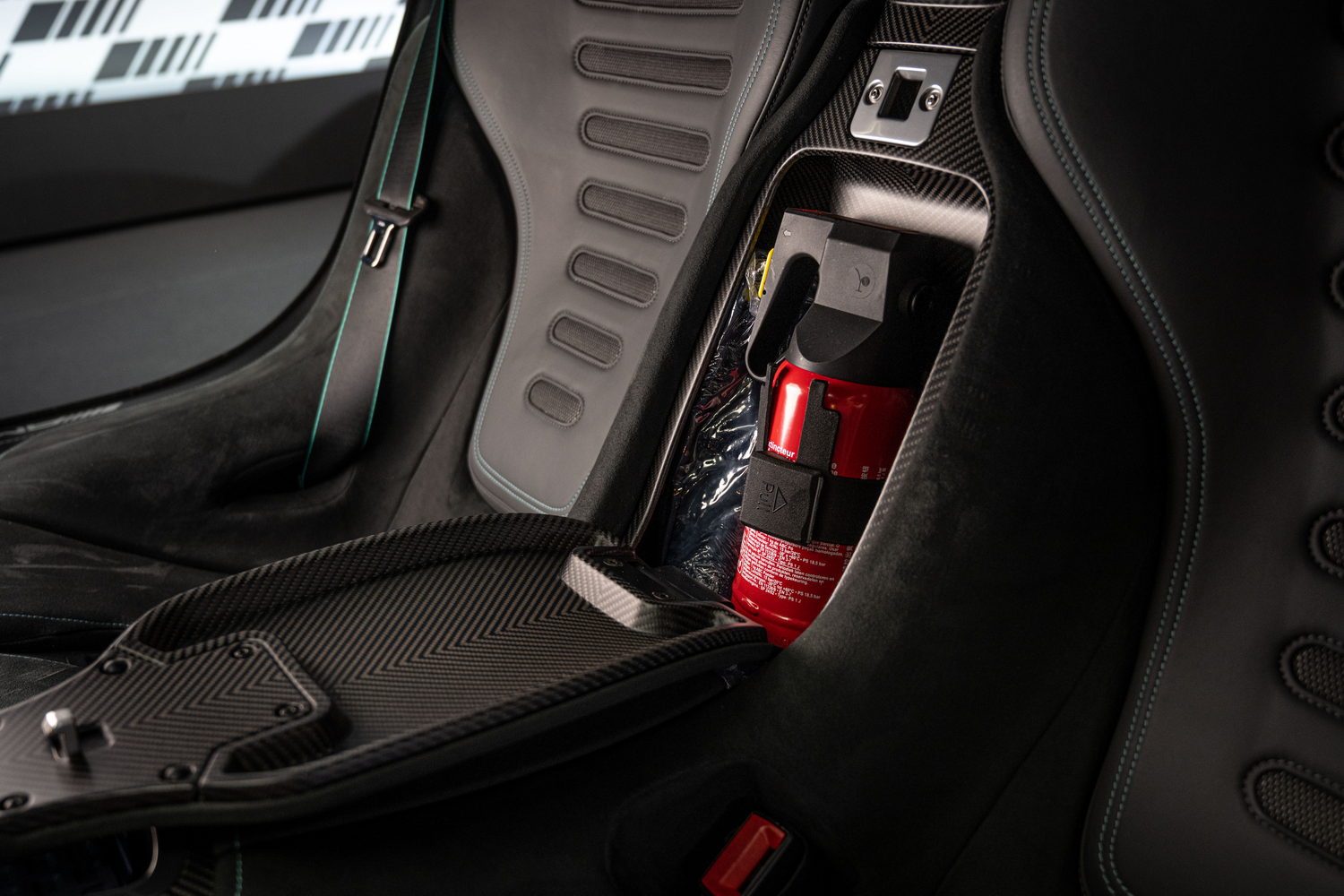 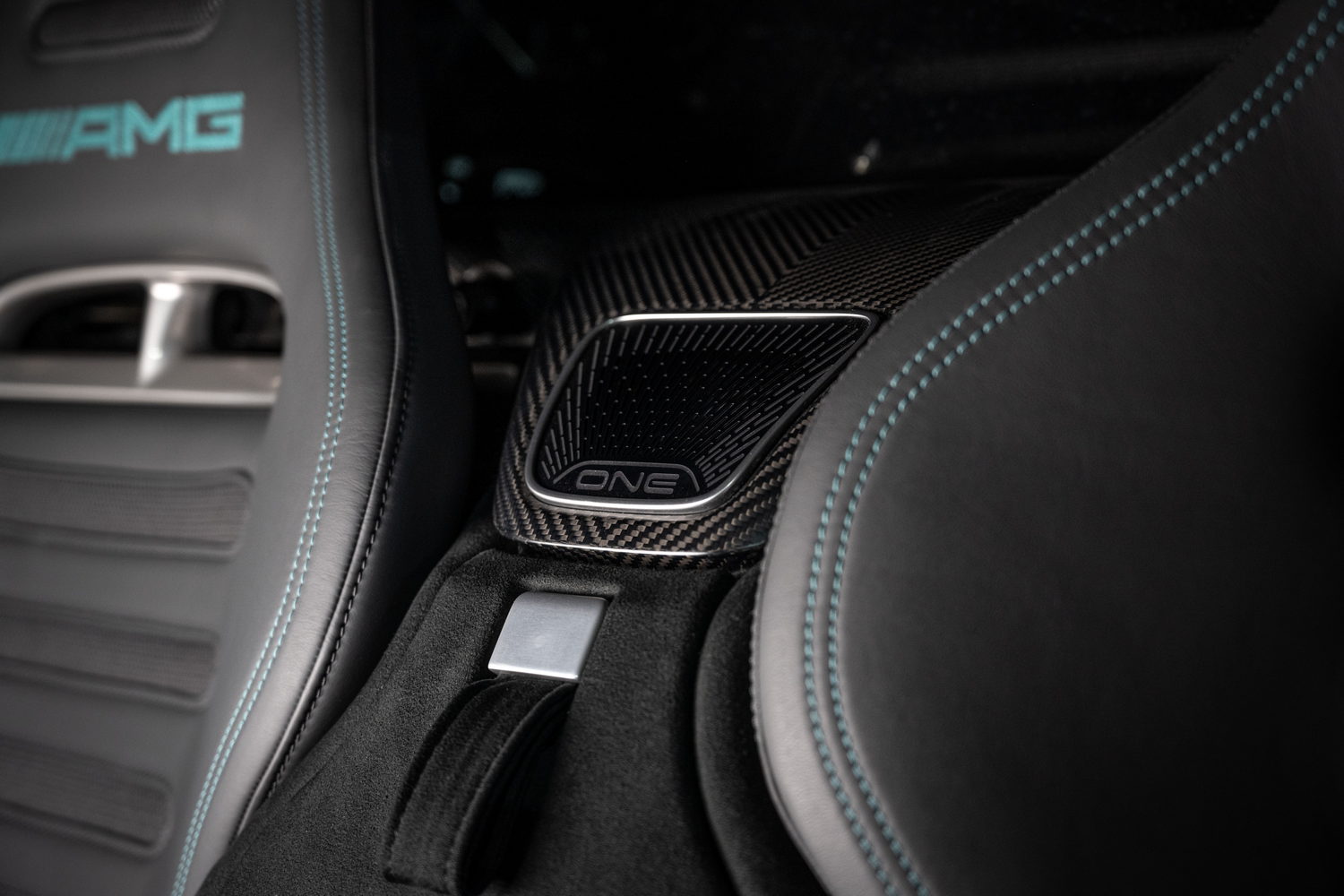 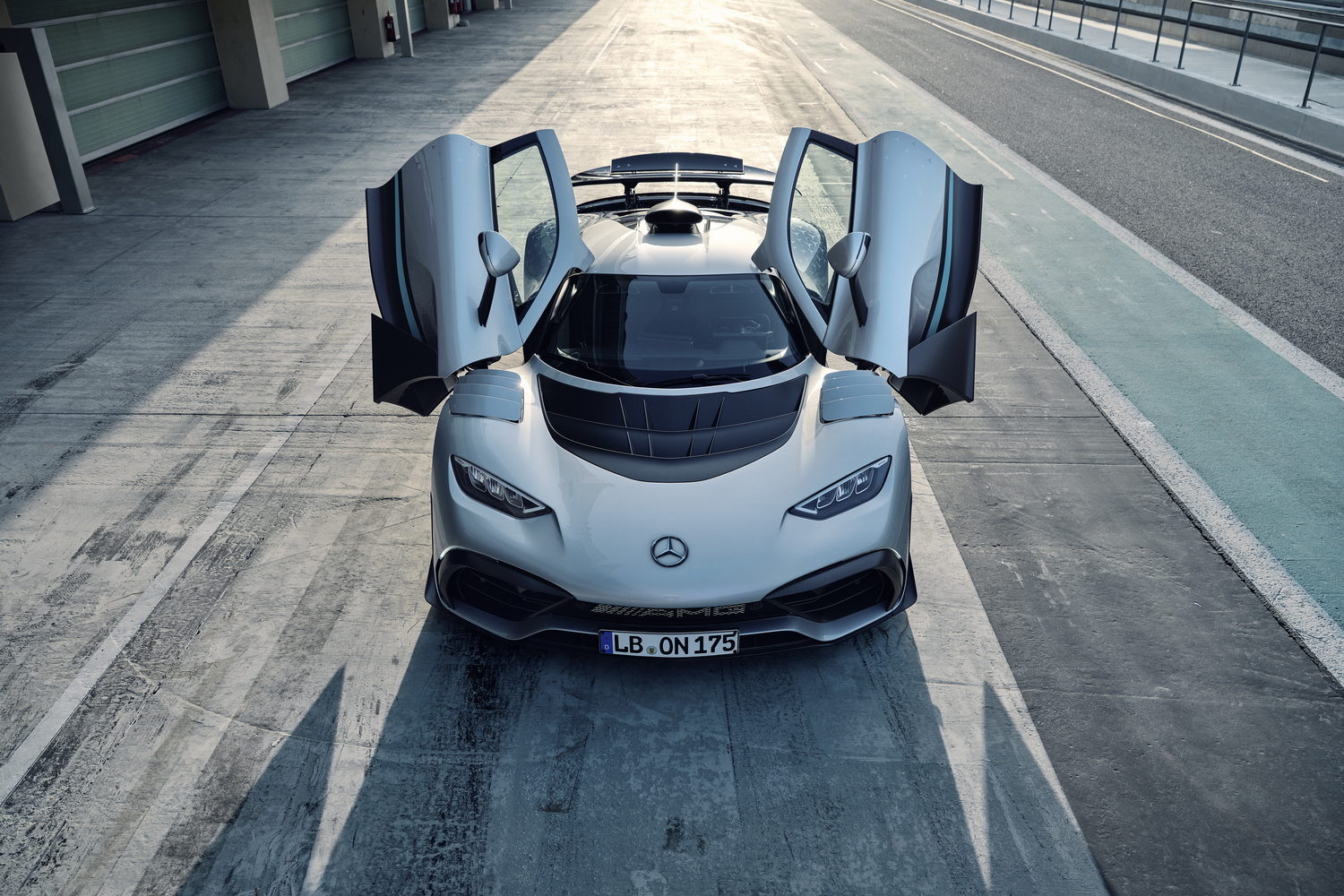 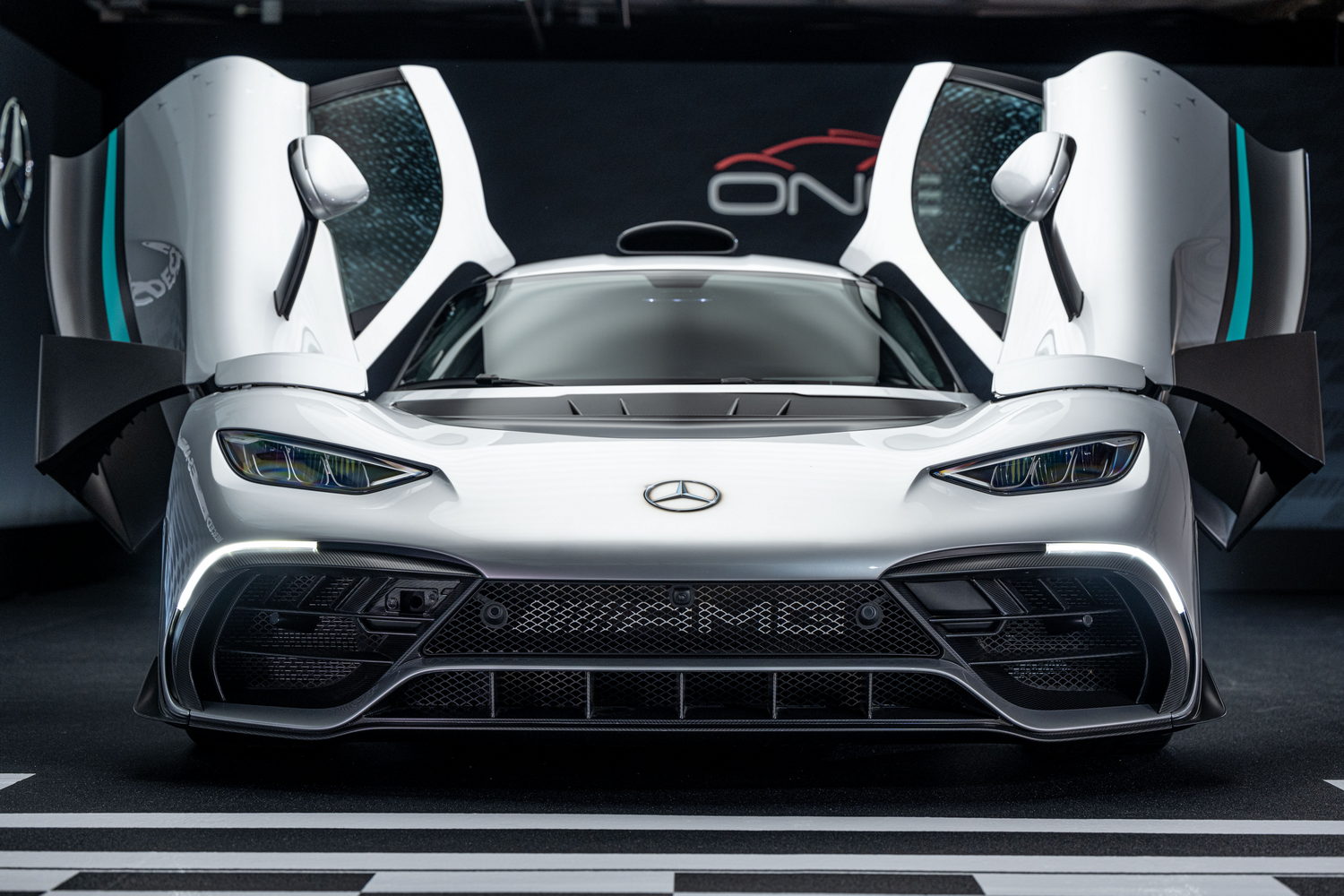 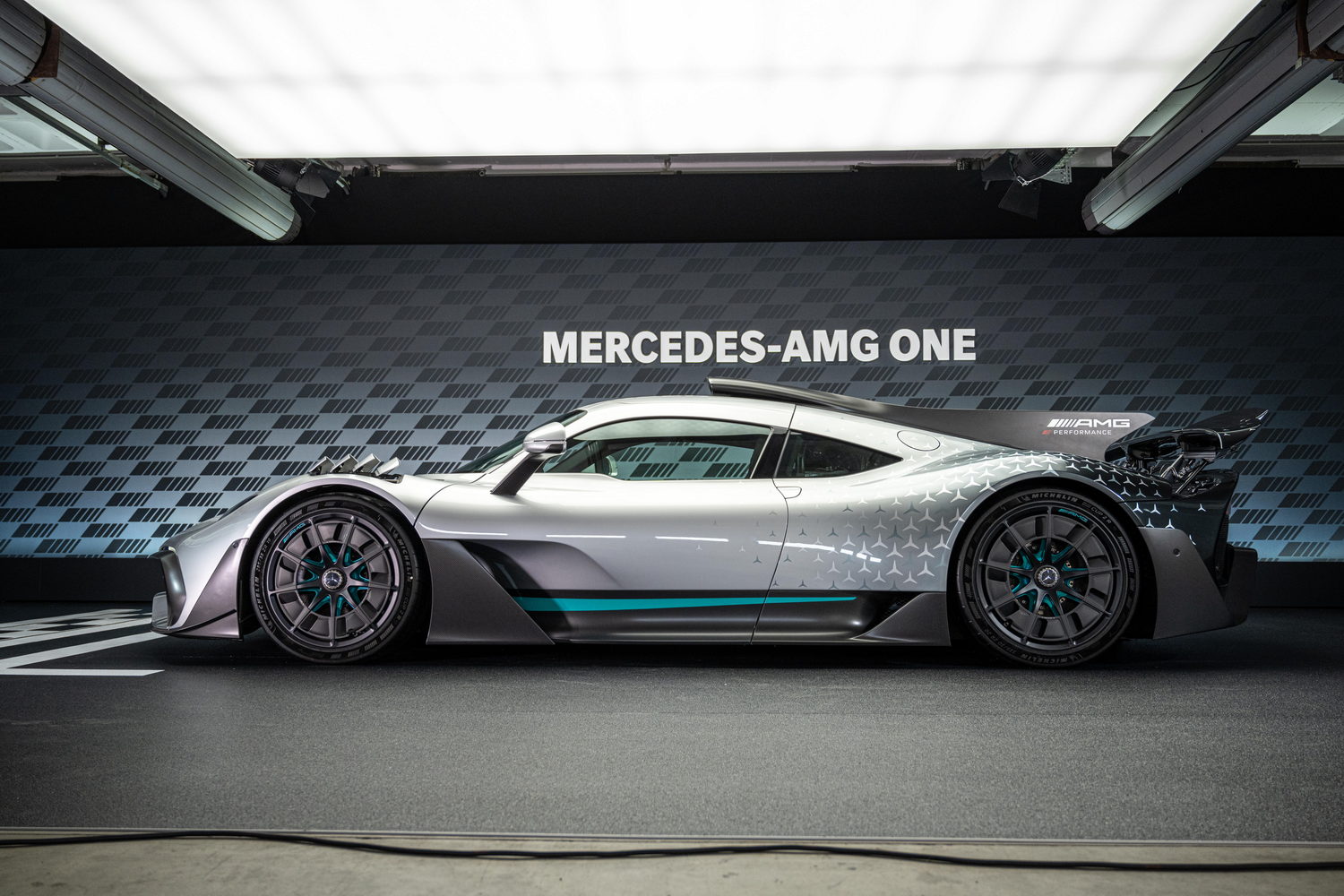 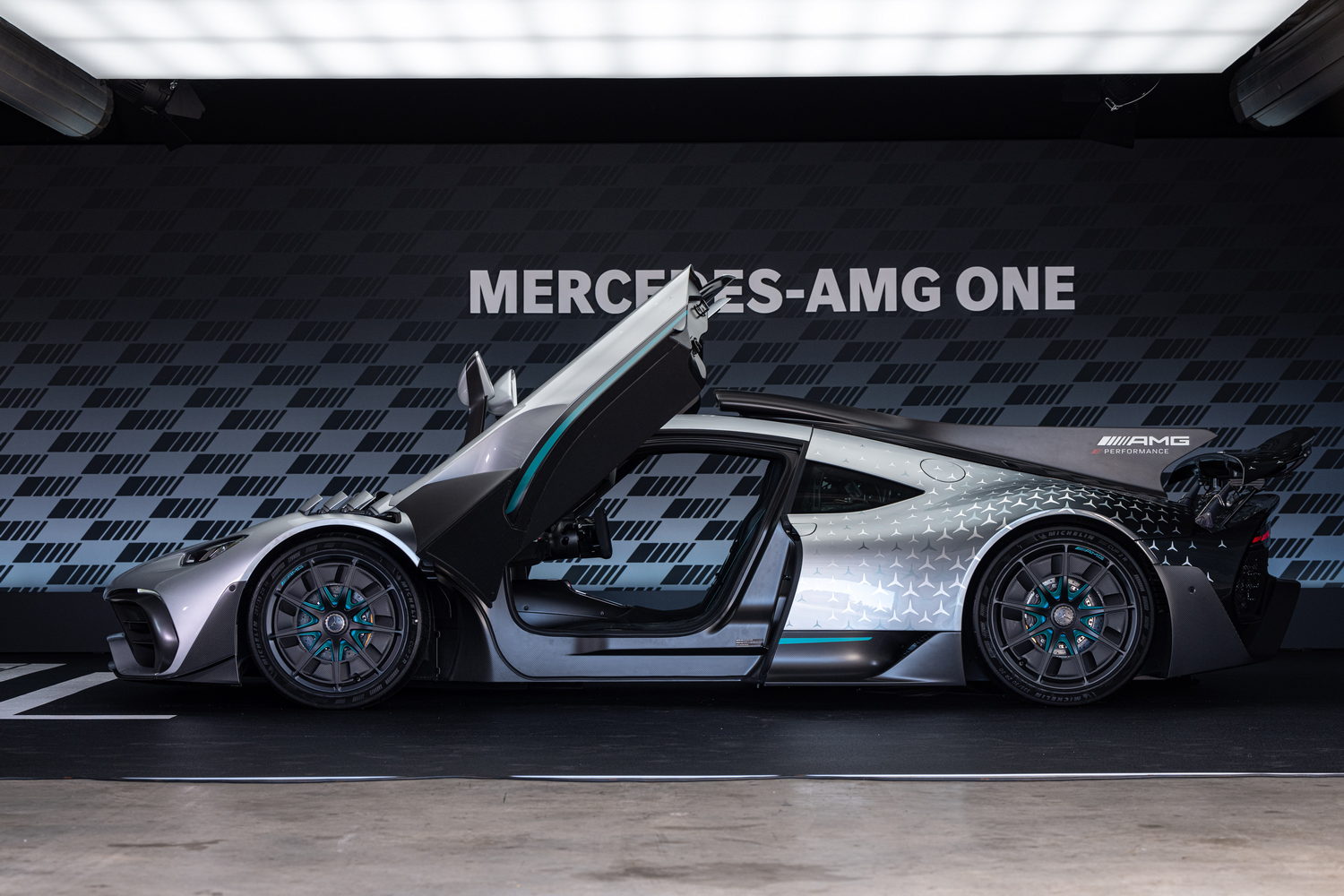 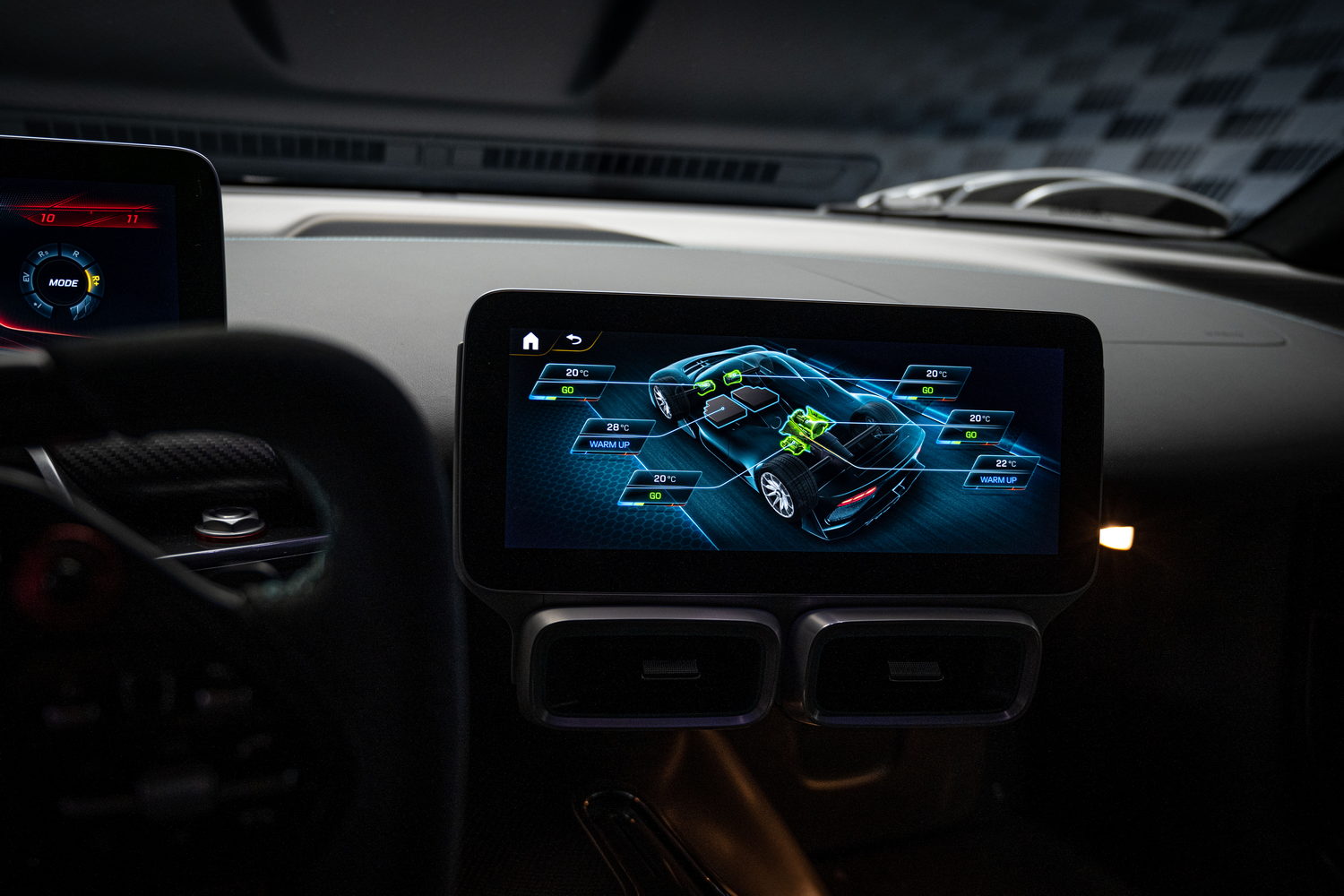 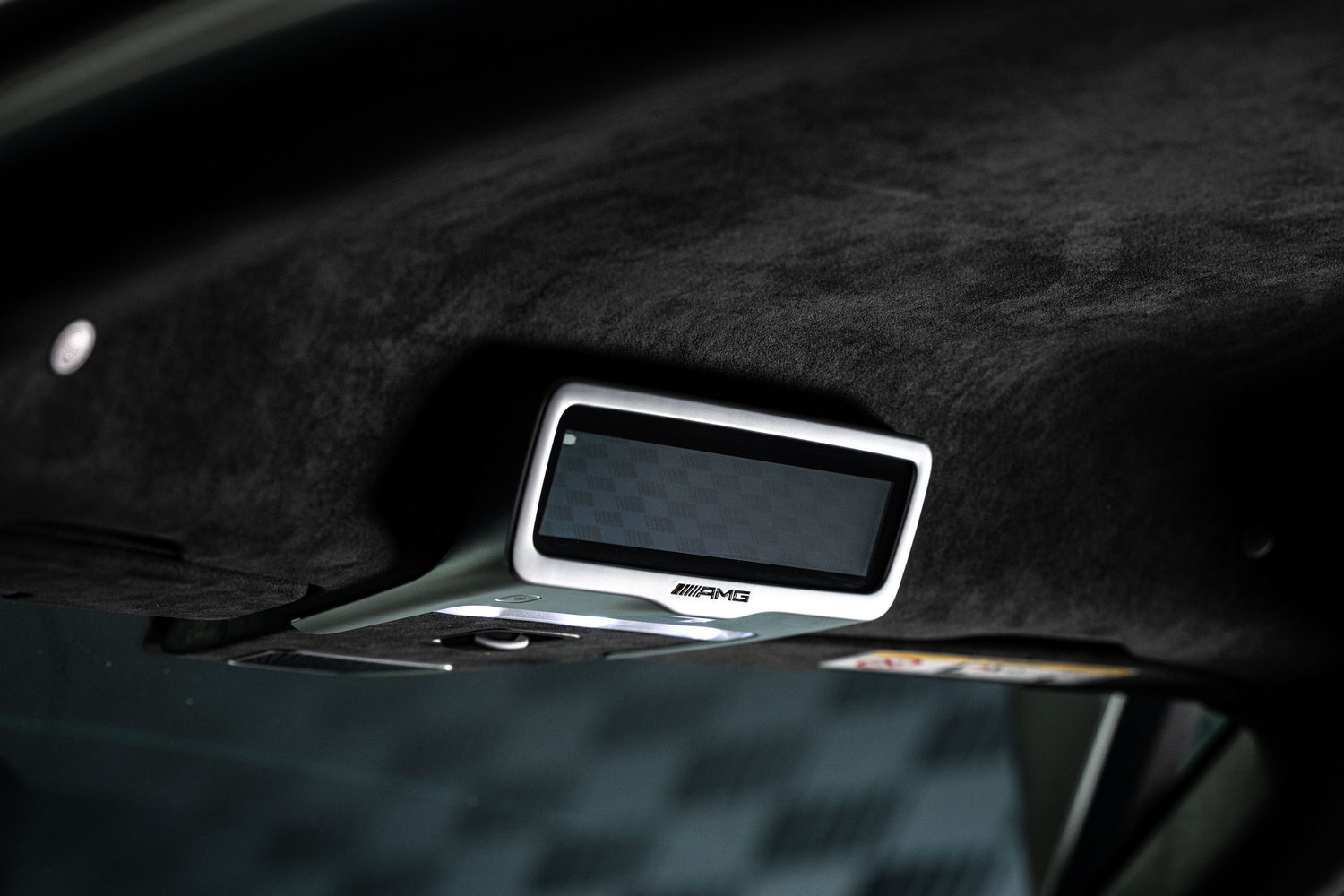 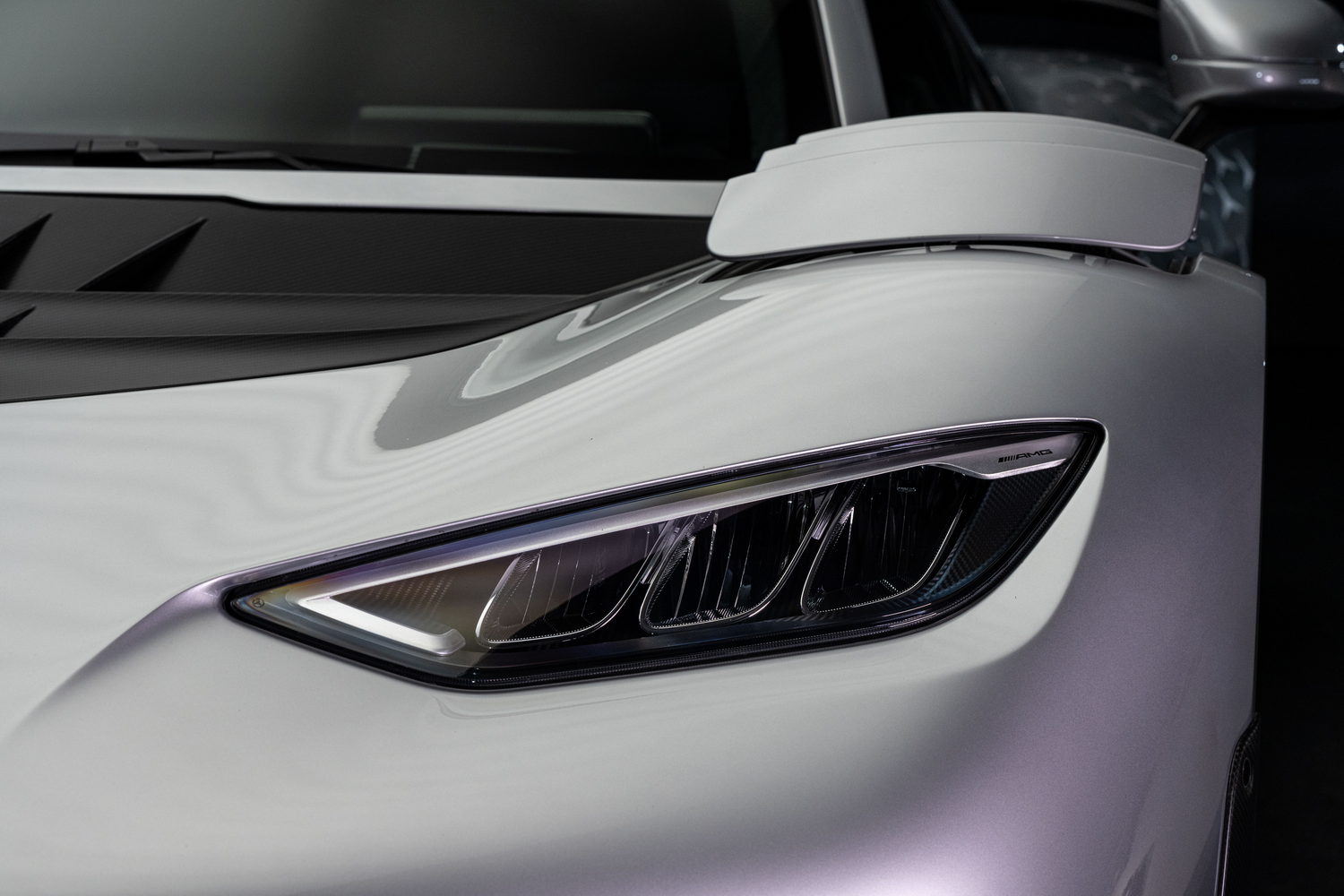 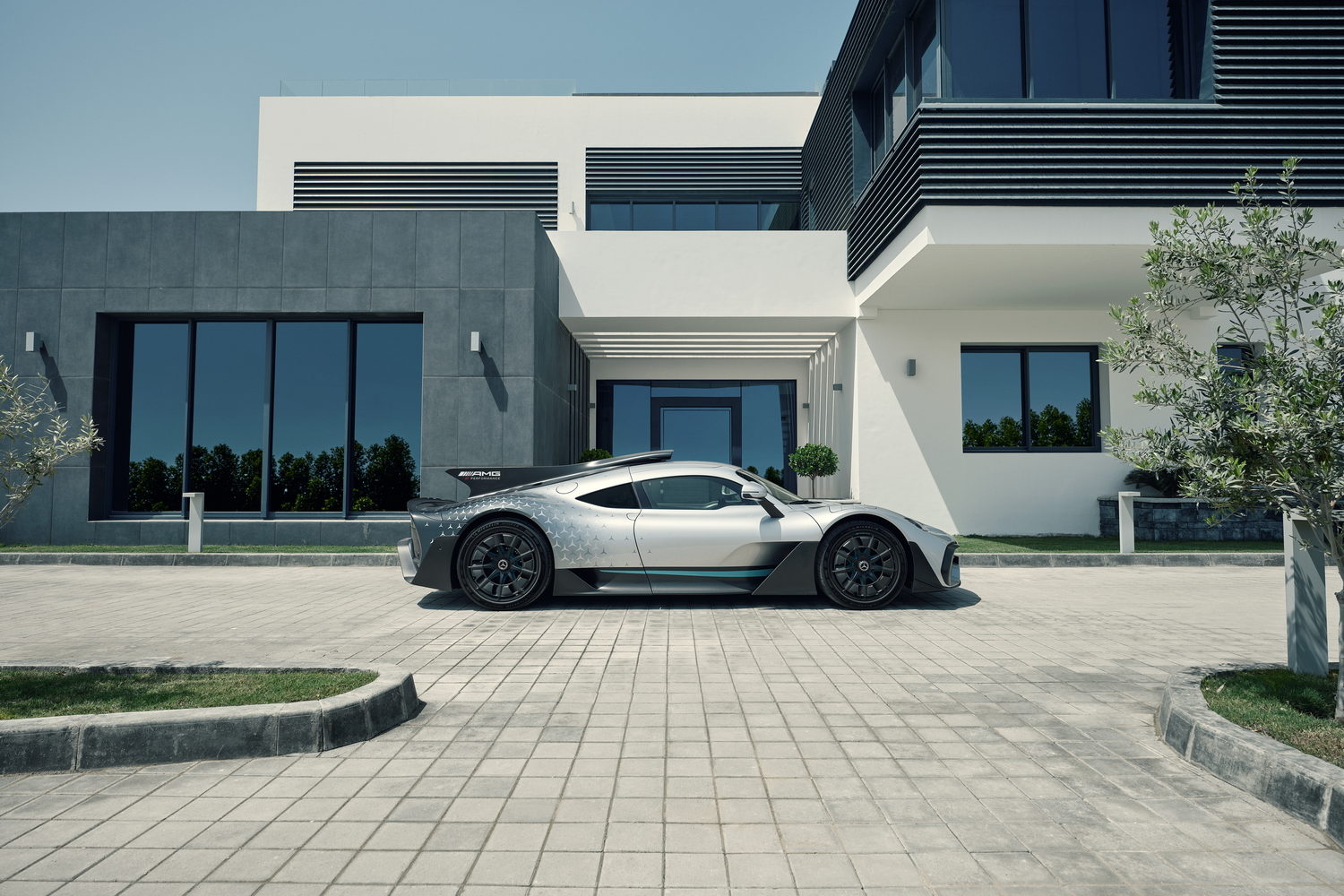 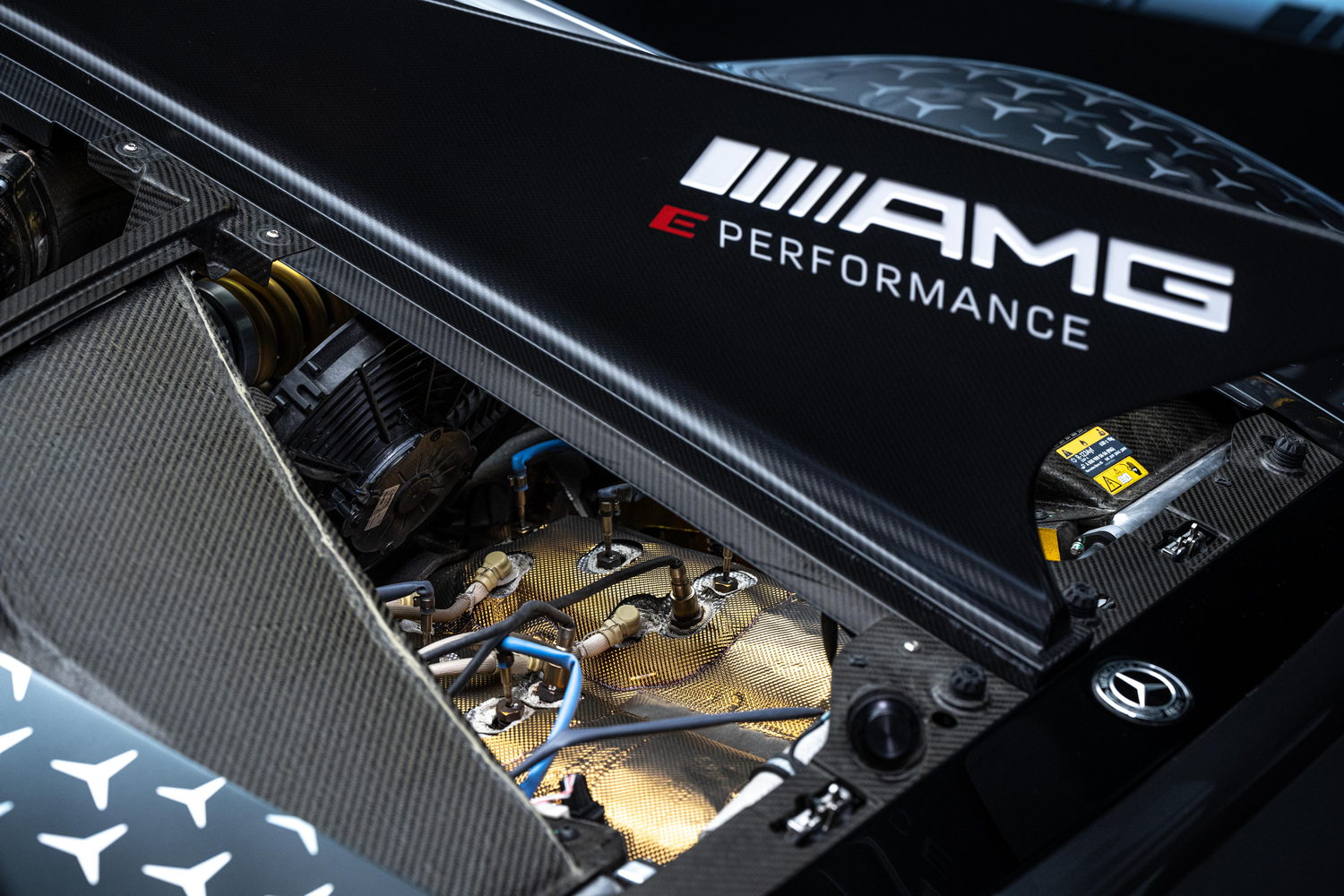 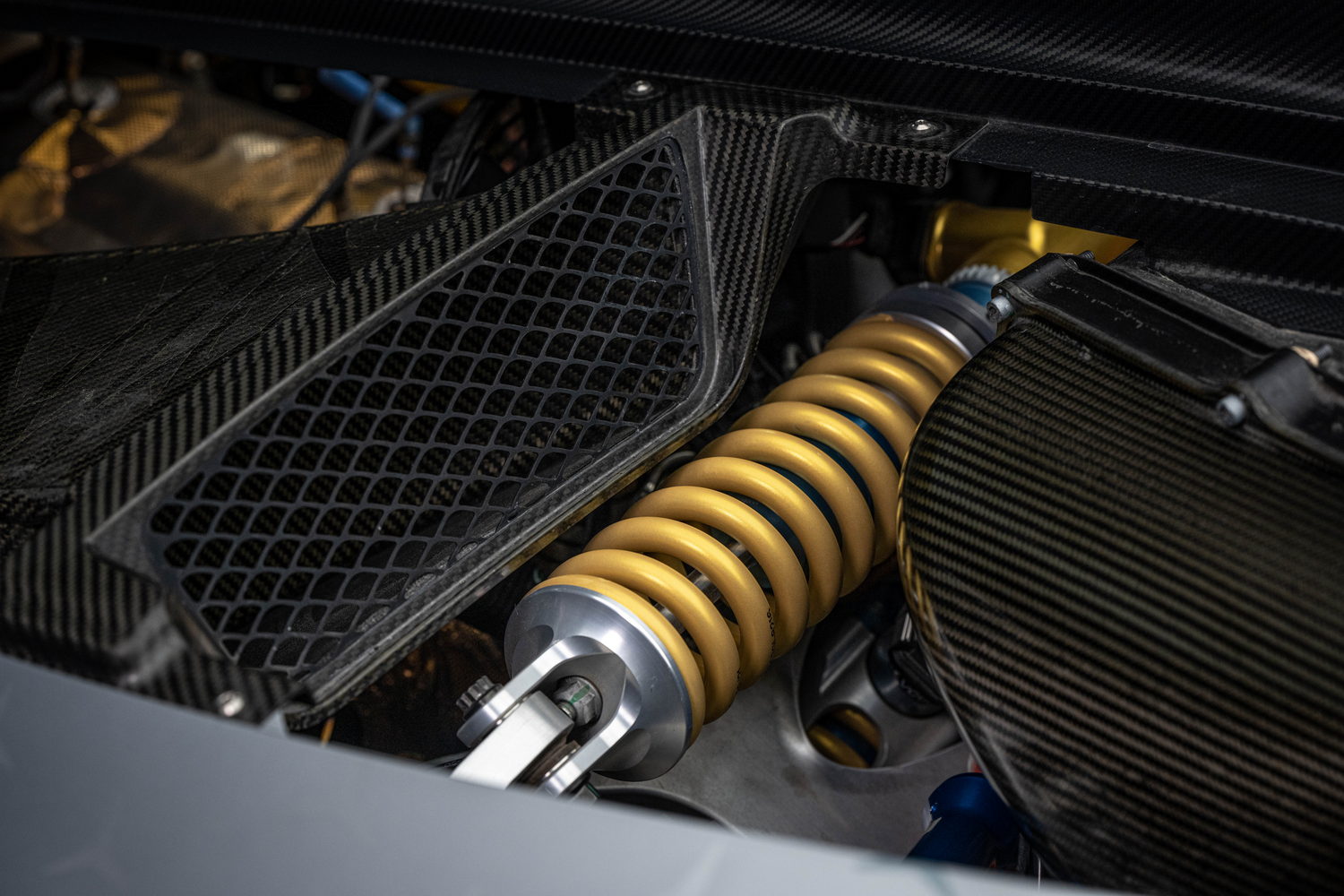 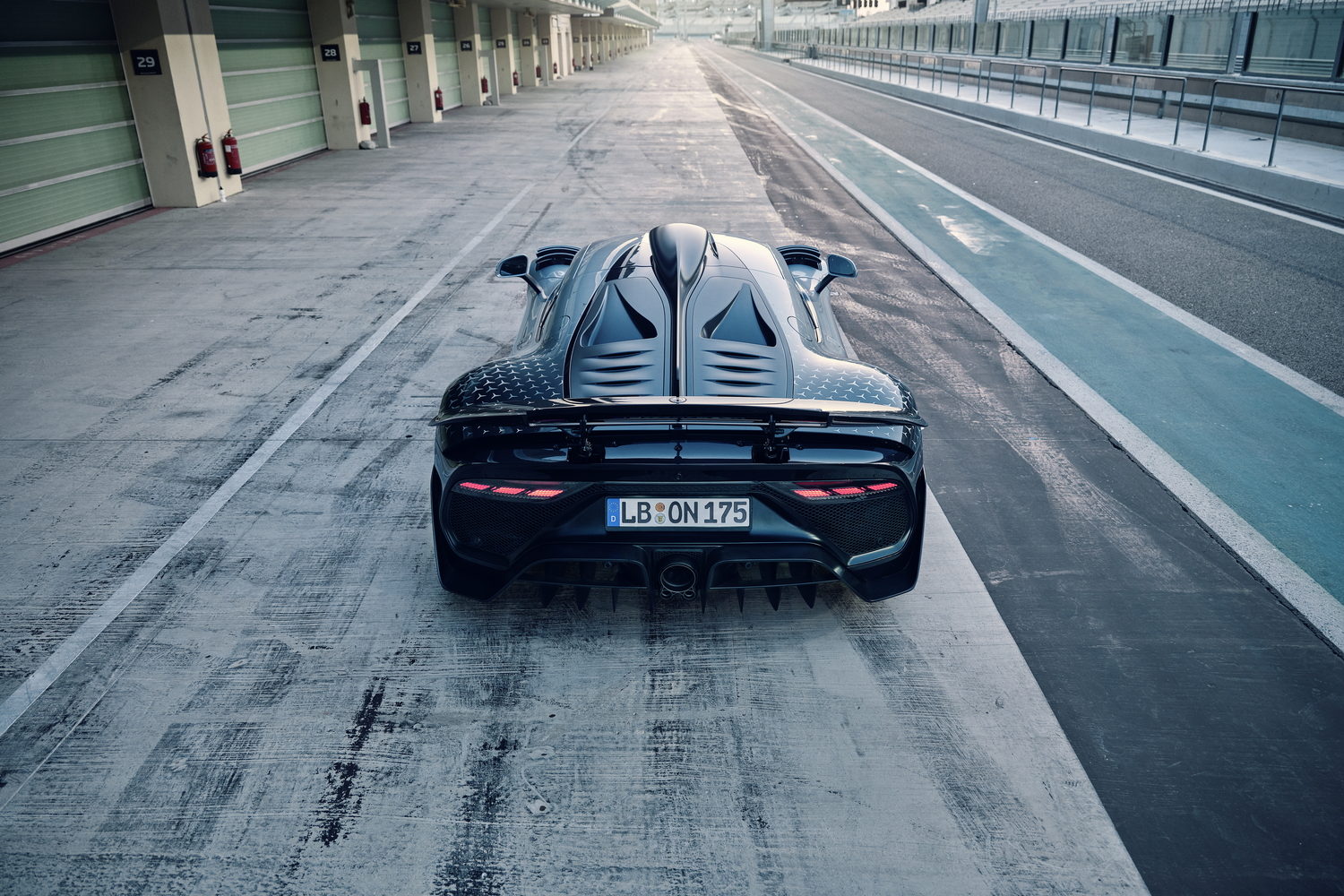 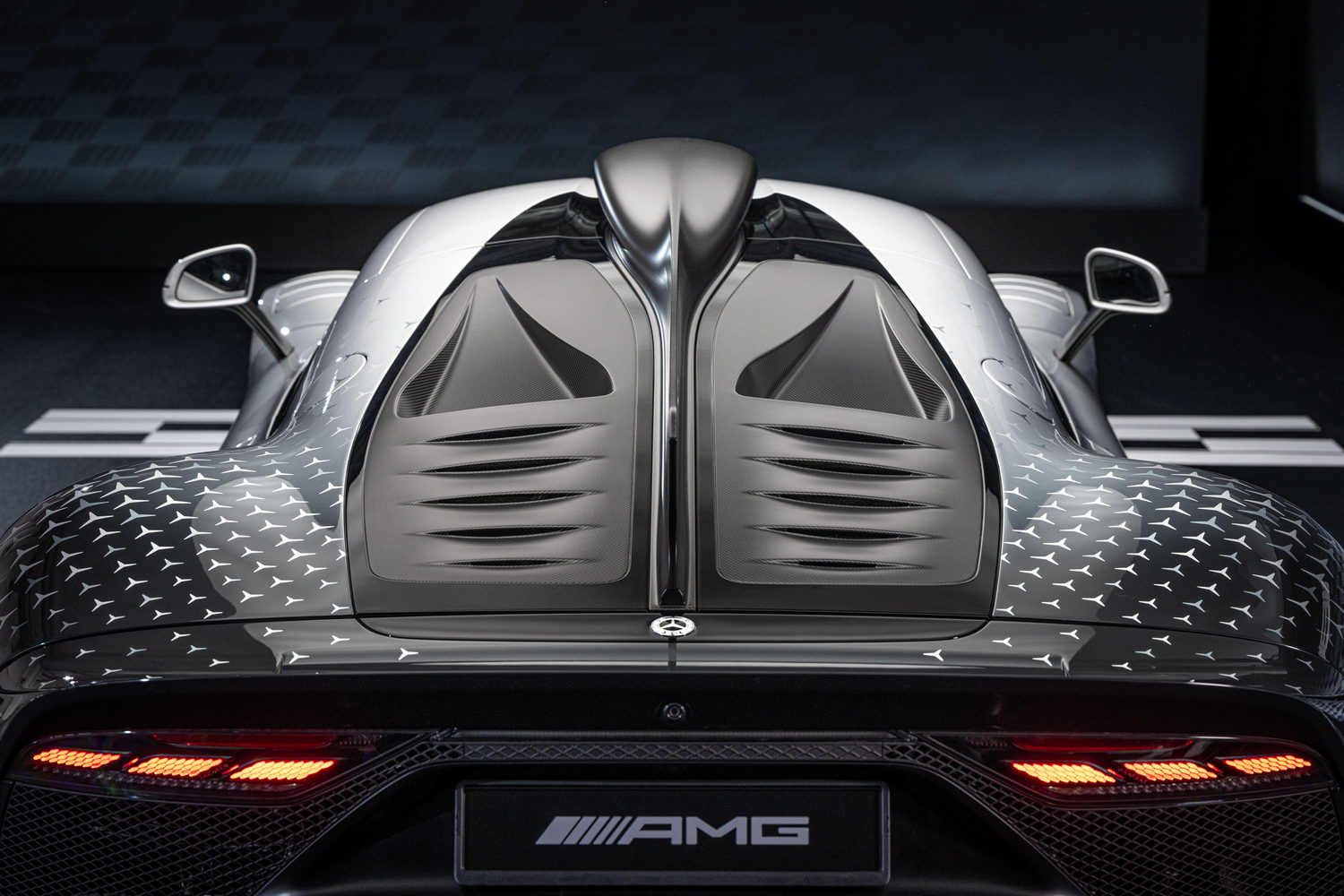 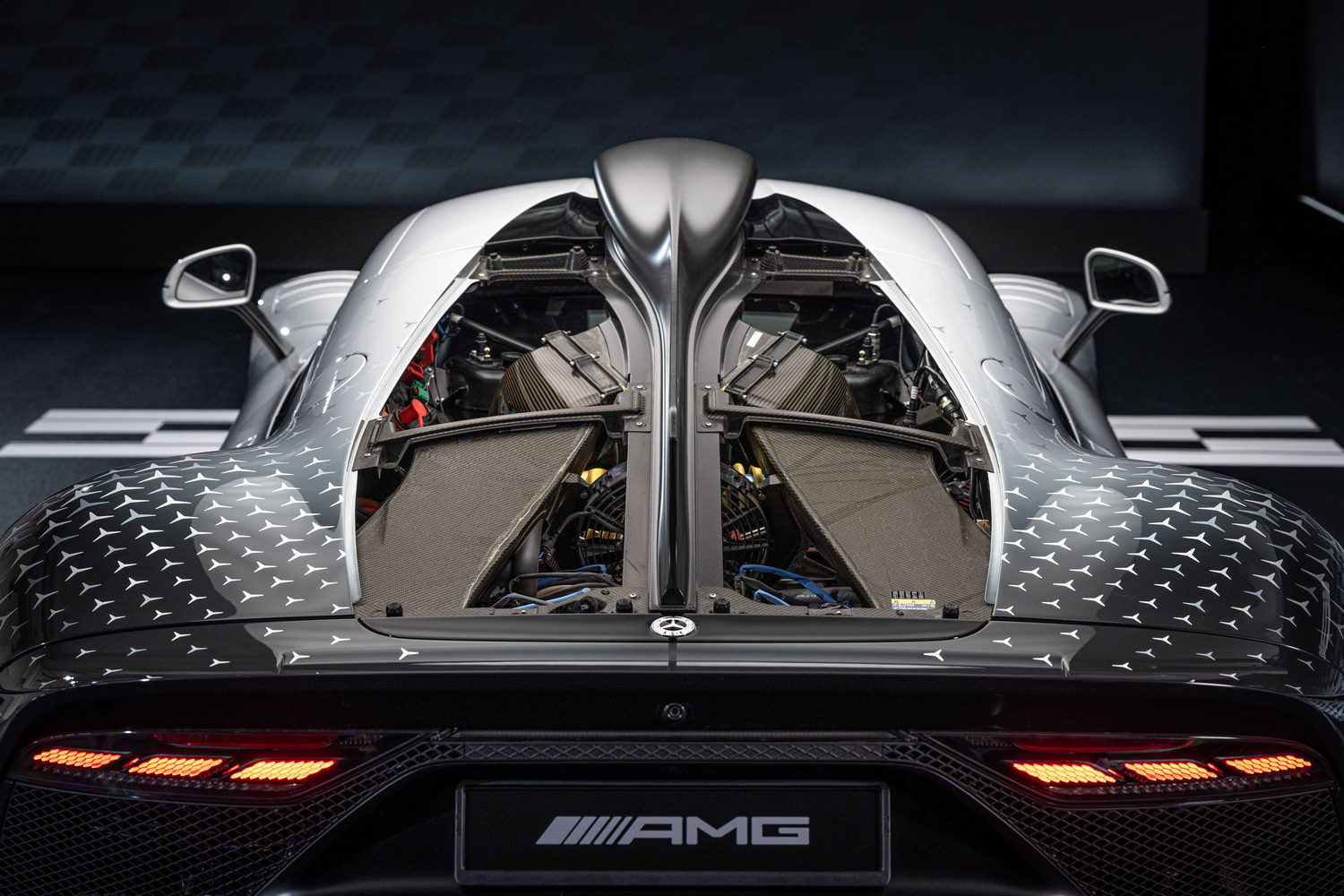 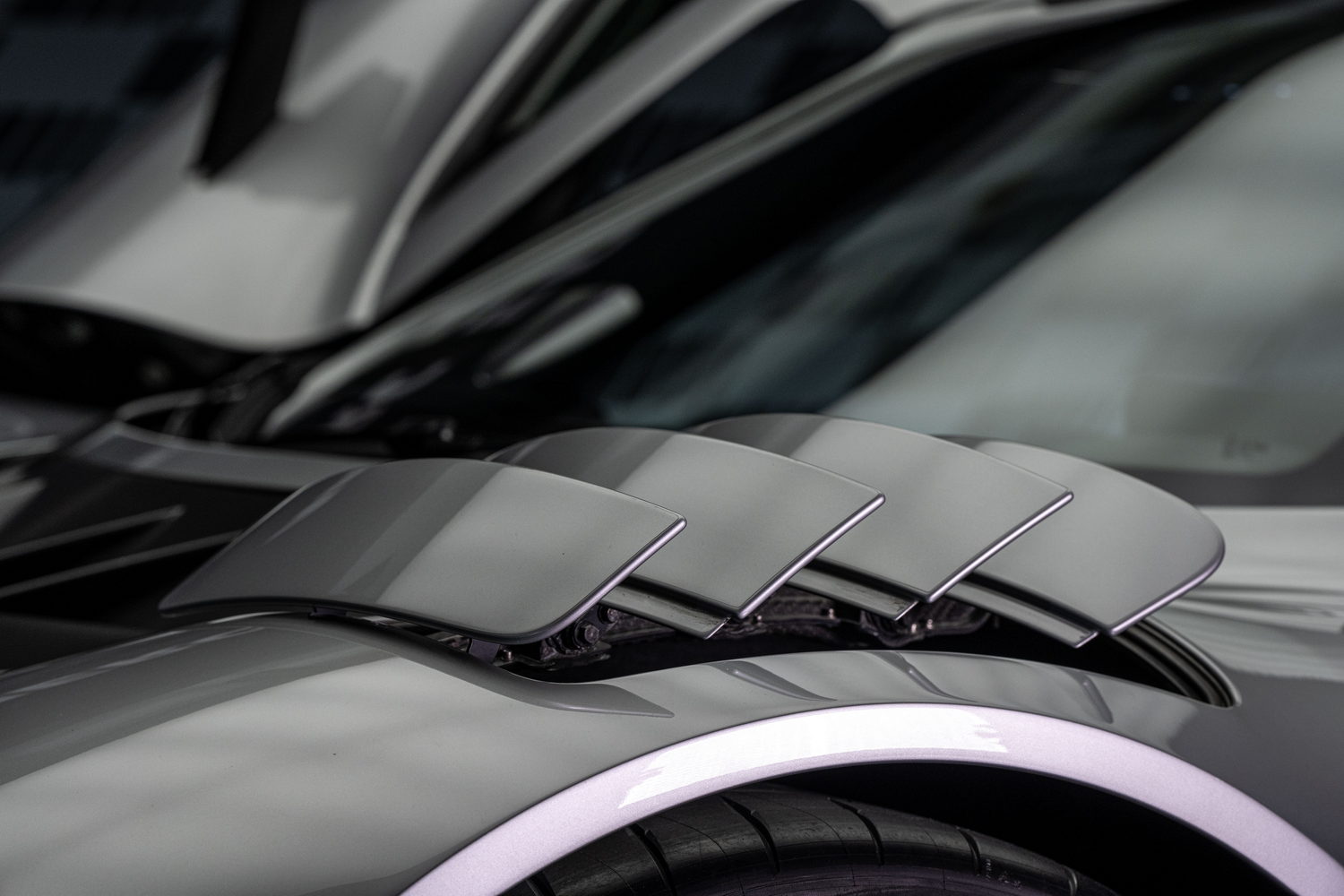 The production-ready Mercedes-AMG One has been unveiled in full.

It has taken five years since the 'concept' version was unveiled, but the wraps have today come off the production-ready Mercedes-AMG One. It's a plug-in hybrid hypercar using more than a little Formula One technology. Only 275 examples are set to be built, at an expected price of close to €3 million, and even at that cost, the Mercedes-AMG One is completely sold out.

A plug-in hybrid, but not as we know it

AMG's reference to F1 is a lot more than just marketing guff and starts with the hybrid powertrain that powers the One. Just like current Formula One racers, the One uses a turbocharged 1.6-litre V6 petrol engine. It's mounted in the middle of the chassis and, in conjunction with the bespoke gearbox (a special seven-speed 'automated manual'), is actually a stressed member of the structure.

A 1.6-litre engine doesn't sound like much for a hypercar, but the capacity doesn't tell the full story, as this is a development of the engine used in the Mercedes F1 car in 2016. Its rev limit has been reduced to 11,000rpm from the racer's 15,000rpm in the name of emissions and reliability, but it still uses a combination of high-pressure direct fuel injection and additional port injection to achieve serious performance.

Apparently, the engine itself produces up to 574hp at 9,000rpm, which is impressive for a 1.6, but is a pittance compared to the One's maximum quoted output of 1,063hp. That's made possible due to a fiendishly complicated hybrid system using four electric motors to assist the engine.

Two of those turn the front wheels, allowing for fully-electric driving, plus torque vectoring across the front axle and all-wheel drive when the engine is running at the same time. These motors act as generators when the car is decelerating, recovering energy to the on-board battery system. This is a directly-cooled lithium-ion pack of 8.4kWh, which Mercedes says is good for an electric range of 18.1 kilometres. It can be charged up from an external socket as in regular plug-in hybrids.

The sophistication comes in the form of the final two electric motors, derived straight from F1. The first is called the MGU-H (Motor Generator Unit Heat) and it sits on the shaft of the turbocharger between the compressor and exhaust-driven turbine. This isn't a normal-looking turbocharger, incidentally, as the turbine and compressor wheels are much further apart than usual. Anyway, the MGU-H is an electric motor-generator that can both turn this shaft and be turned by it.

So, even at low engine rpm, with little exhaust gas flow to turn the turbine, the MGU-H can turn the compressor and provide boost. Mercedes-AMG claims that this enables faster response to accelerator inputs than experienced in a naturally aspirated V8 engine. Conversely, when there is excess boost or exhaust flow, the MGU-H can actively slow down the shaft and hence acts as an electricity generator to charge the battery or drive the last of the four motors.

That one's called the MGU-K (Motor Generator Unit Kinetic) and it is integrated with the petrol engine so it can add power (over 160hp) directly to the crankshaft via a spur gear arrangement.

The sophisticated hybrid powertrain isn't the only thing borrowed from motorsport, as the Mercedes-AMG One uses a carbon-fibre monocoque structure to reduce weight and enhance stiffness. The aluminium suspension features push-rod spring struts and adaptive damping with three disparate settings (Comfort, Sport and Sport+). Unlike F1, there's anti-lock brakes in the One, along with three-stage stability control and nine-stage traction control.

Perhaps more fascinating is the active aerodynamics, something that is banned from Formula One. The AMG One gets three different aerodynamic setups designed for road use, track use and attaining higher speeds on track. Mercedes says that, in its most aggressive setting, the car develops downforce from just 50km/h. Helping that are the active front splitter, a massive deployable rear wing and the louvres that are visible over the top of each of the front wheels.

Working in conjunction with all that, the ride height can be hydraulically dropped 37mm at the front and 30mm at the rear, while that distinctive fin that runs down the backbone of the car (mirroring the engine cover profile of an F1 car) is also designed to enhance stability and help tidy up the air flow. AMG doesn't quote a downforce figure, but does reveal that in the maximum downforce 'Track' setup, there's up to five times as much downforce produced than when in the 'Highway' setup.

Look closely at the F1-inspired steering wheel inside and you'll spot that the gold-coloured button is labelled 'DRS' - that's for Drag Reduction System and it's a term that F1 fans will be familiar with. In the AMG One, it reduces downforce by about 20 per cent and reduces drag by closing the louvres over the front wheels and retracting the rear wing, in a bid to allow the car to accelerate to higher speeds quicker. It's deactivated automatically when the driver presses the brake pedal or takes a corner.

The brake system itself features massive carbon-fibre ceramic composite discs all round. They hide behind one of two different wheel designs using a centre lock and low-drag design. The top-spec option is forged magnesium. Either way, the front wheels are 19-inch rims, the rear 20s, while there are bespoke Michelin Pilot Sport Cup 2R M01 tyres fitted. A little unnecessarily, they feature the AMG One's silhouette and the number '1' on their sidewalls.

Feels racy inside, too

The two-seat cockpit is accessed via doors that open diagonally forwards and upwards and it looks quite minimal at first. The seats are moulded into the structure of the car, though the backrest can be adjusted to two different angles, the steering wheel moves electrically and the pedal box, which is high-set to give the driver that distinctive lying-down seating position found in single seaters, can be moved to suit different heights.

The tiny steering wheel looks like the result of a tryst between Lewis Hamilton's and that of a normal Mercedes-AMG road car as it features some vaguely familiar buttons and switchgear as well as a few switches inspired by motorsport. There's a digital screen for the instruments in front of it and another screen in the middle of the car.

Despite the minimal design, the AMG One is well-equipped, featuring climate control, electric windows, an infotainment system and even a rear-view camera instead of a central mirror. The upholstery is magma grey nappa leather and black Dinamica microfibre, with yellow contrast stitching, but we suspect that, given the cost of this car, owners will be allowed a degree of customisation.

As a final flourish, the exterior airbrush finish, featuring hundreds of little three-pointed stars, was designed by the artist who also penned that of the Mercedes Formula One cars.