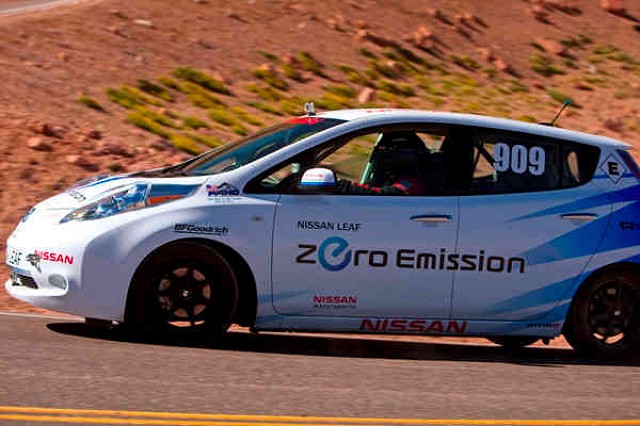 The Nissan LEAF is the first electric car to 'win' the Pikes Peak hillclimb.

High altitude proved no problem for the Nissan LEAF competing in the Pikes Peak International Hill Climb in Colorado as it became the first electric car ever to win at the famous event.

The LEAF was competing in the electric vehicle class and was driven by Chad Hord - a man more used to piloting Nissan's off-road racing truck. Completing the 20-kilometre course in 14 minutes 33 seconds, Hord and the LEAF ran in near silence, with only some tyre squeal to let spectators know they were coming.

In near standard specification - except for safety gear and a stripped out interior - the LEAF suffered none of the power loss internal combustion engined race cars endure due to the thin air at the 4,302-metre summit of the hillclimb.

Hord said afterwards: "The LEAF was great fun to drive up the mountain. With the instant torque from the electric motor we were able to jump out of the many slow corners and the performance was very consistent from the bottom to the top since the electric motor wasn't affected by the high altitude near the summit like the gasoline powered cars."