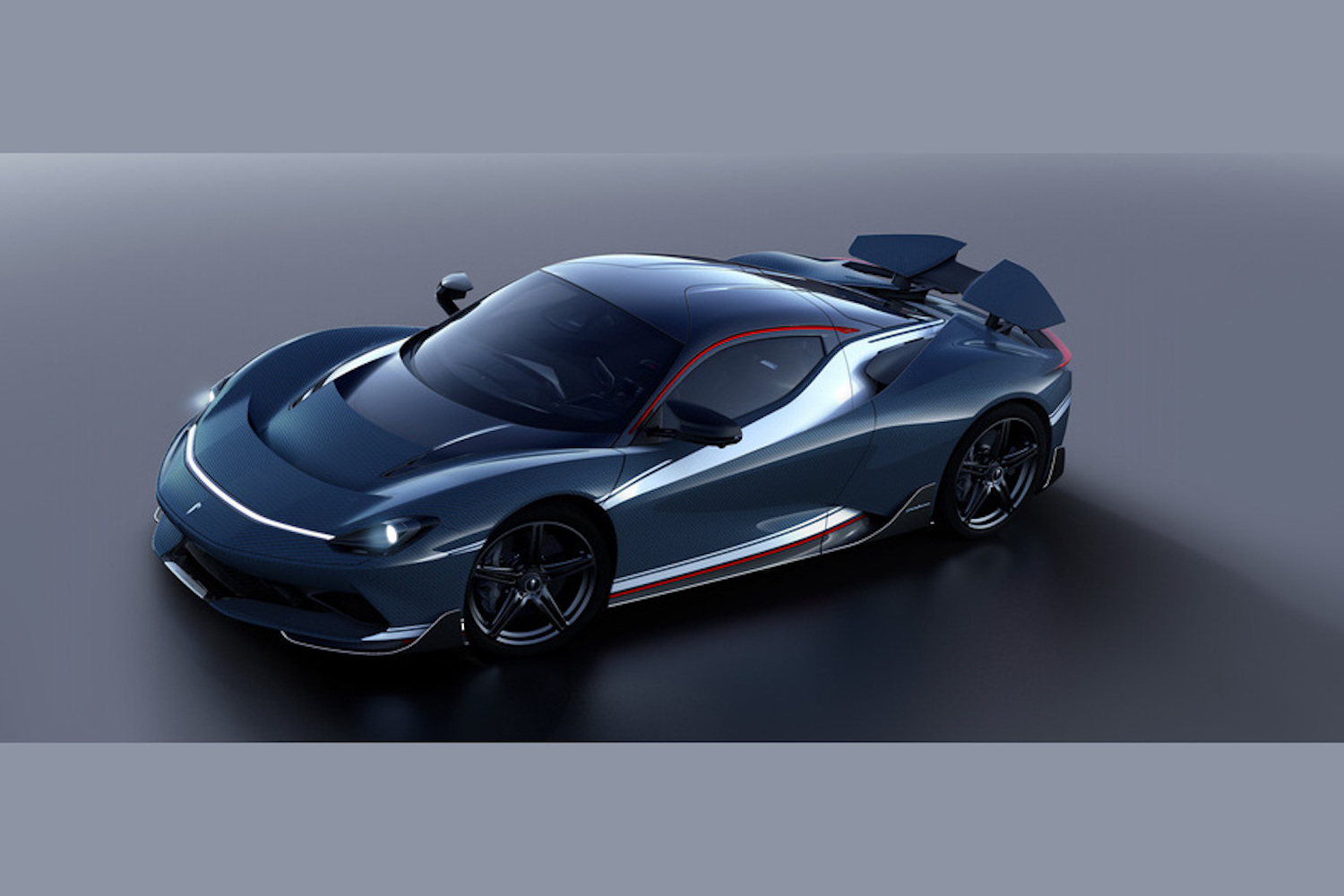 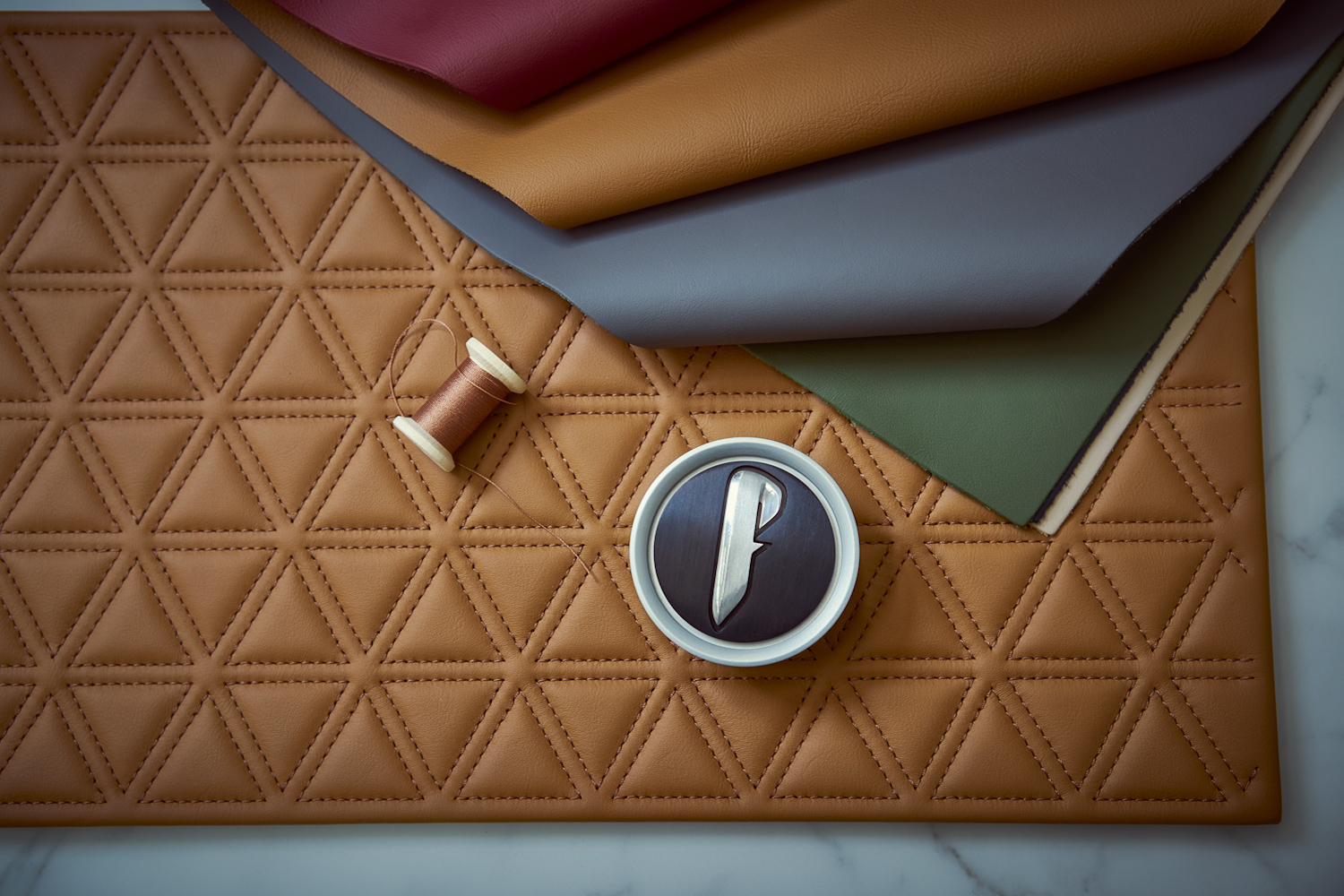 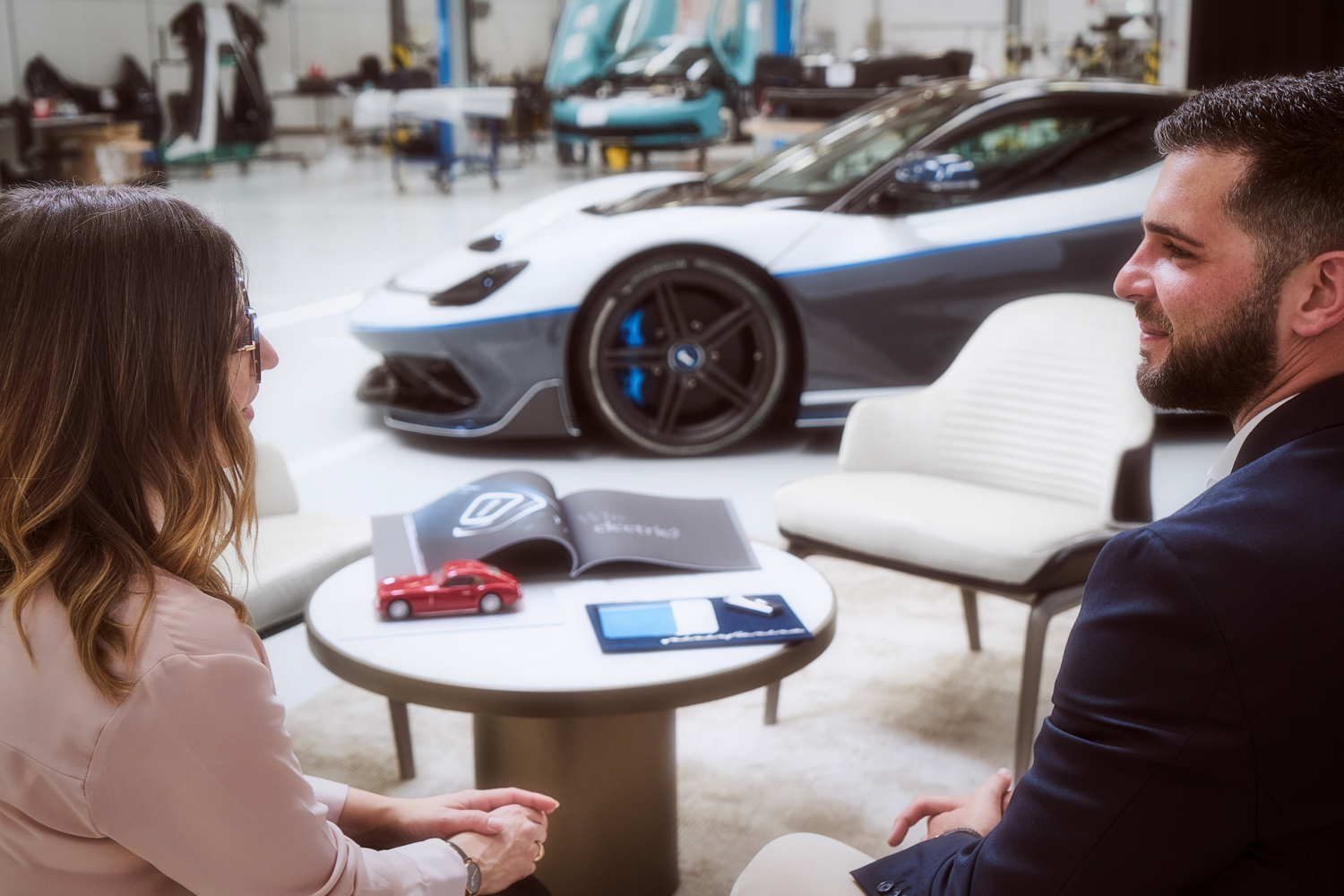 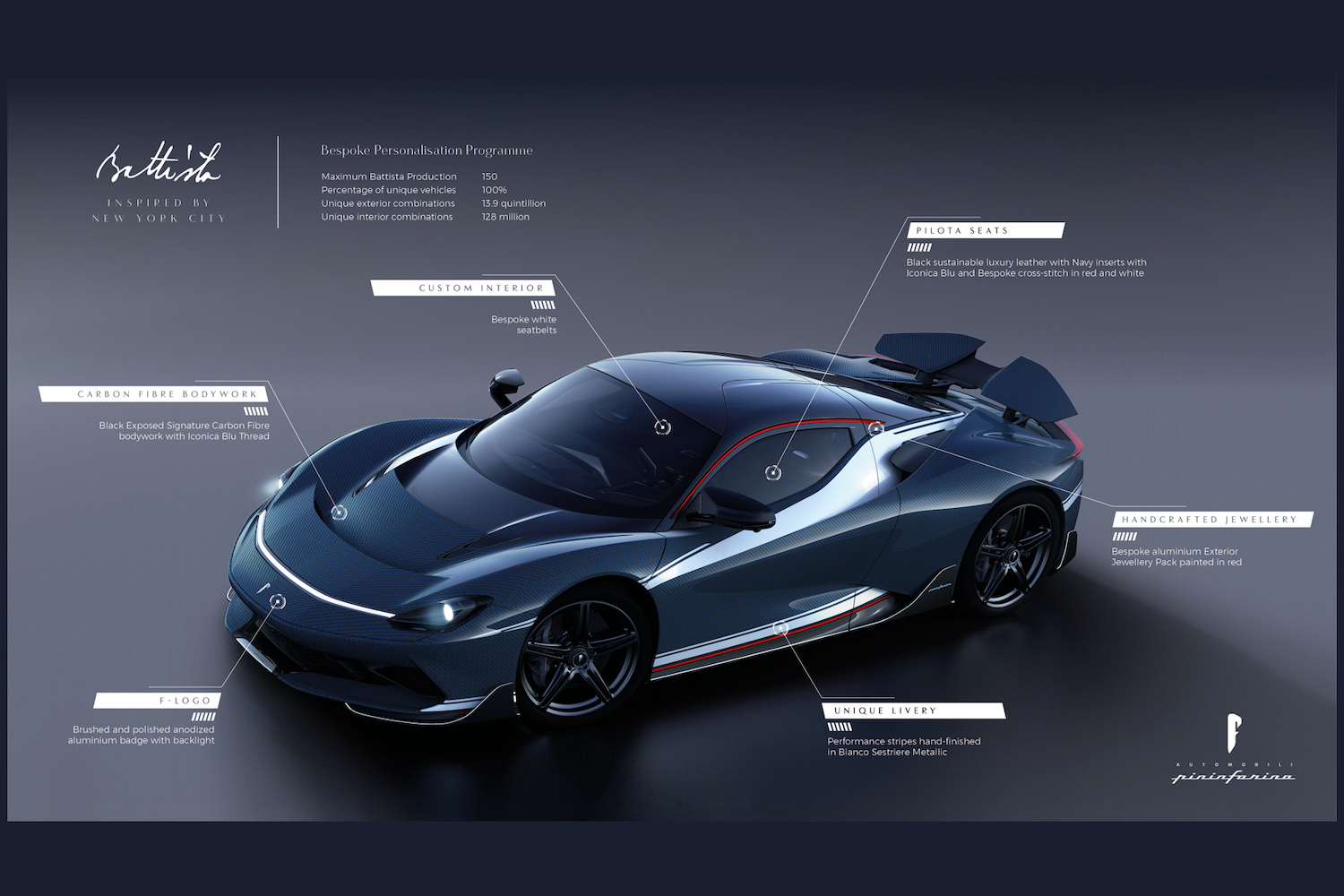 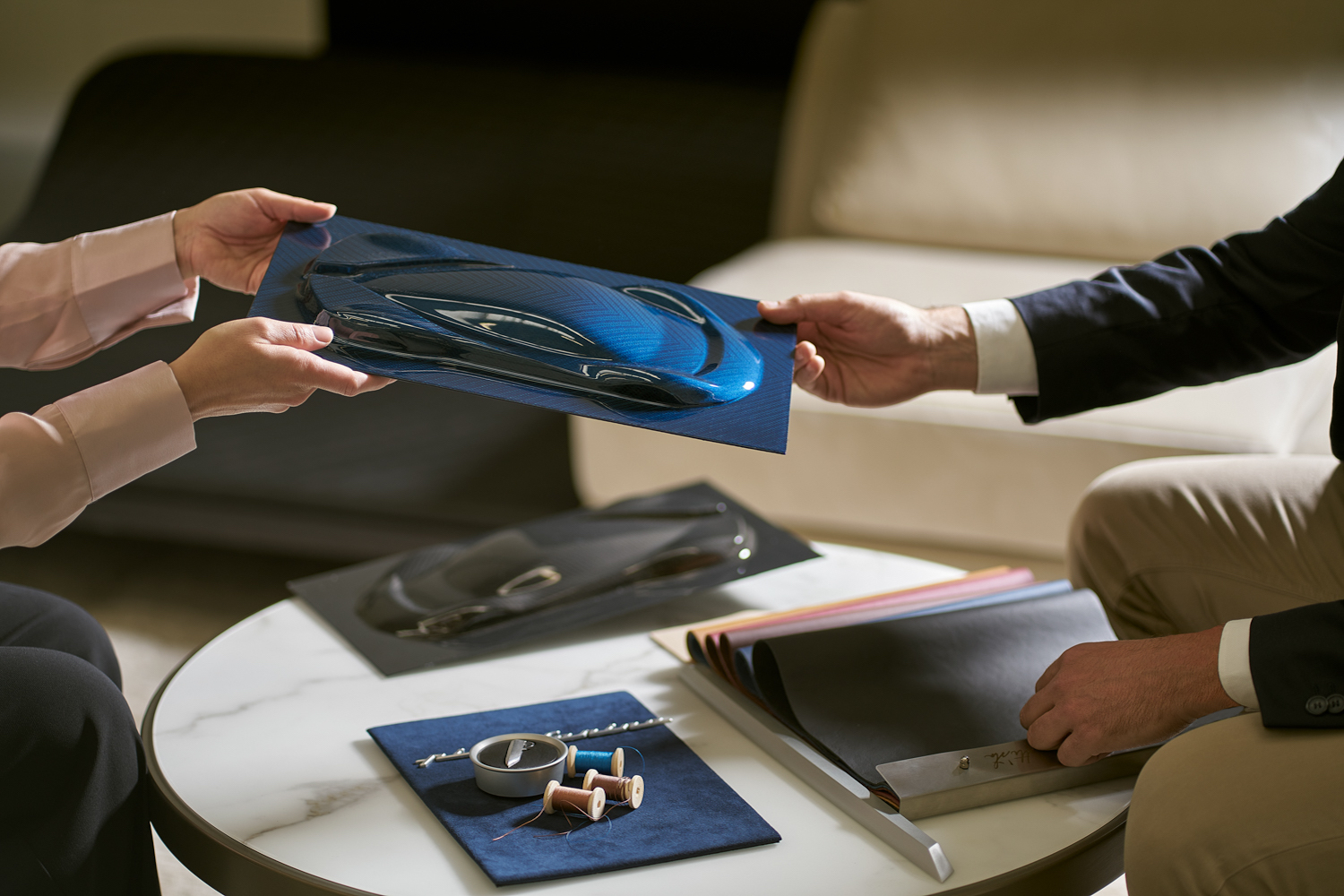 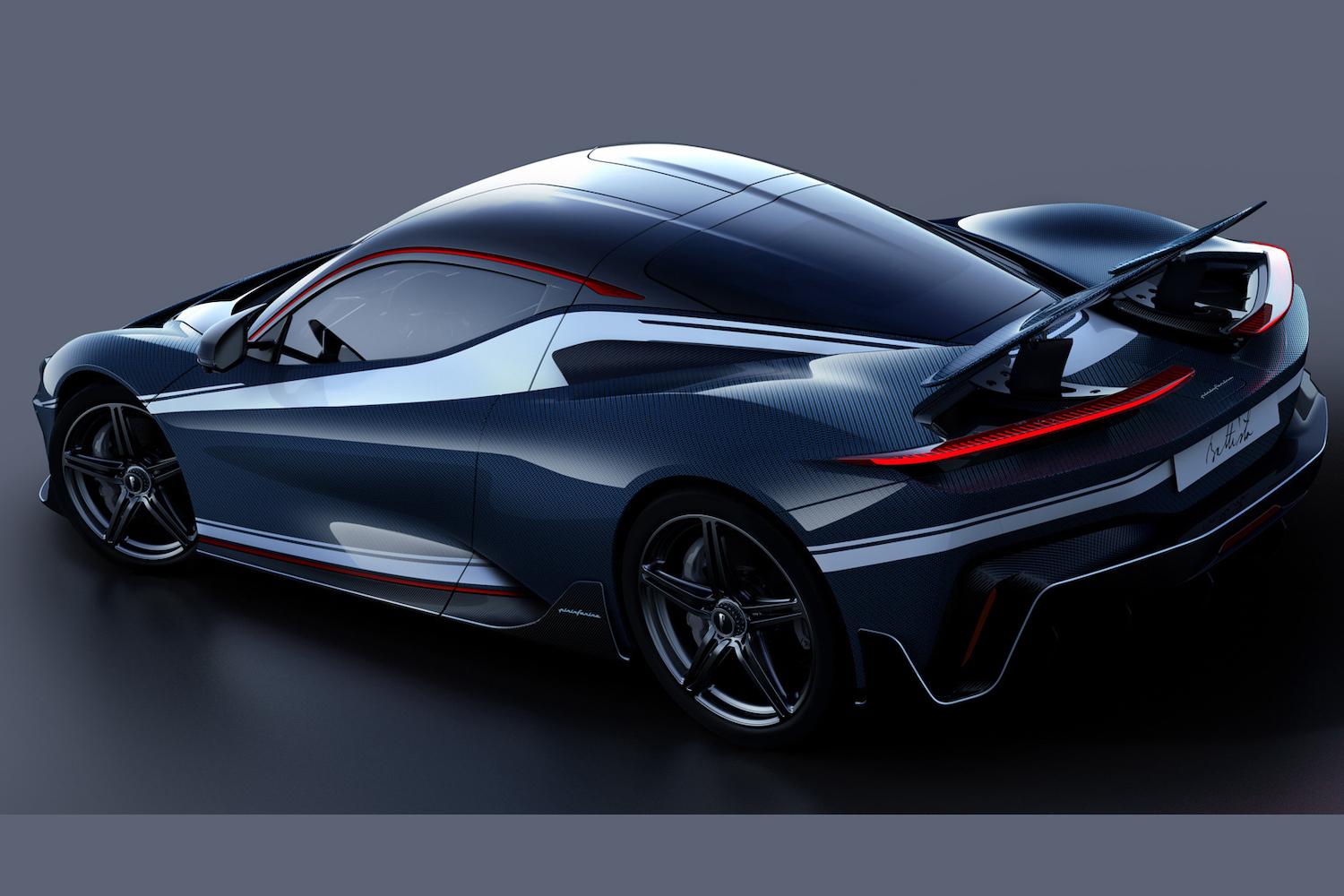 Automobili Pininfarina has announced a new bespoke programme for its all-electric Battista hypercar.

This blue Battista is the first car to be given the new 'Bespoke' Pininfarina service, and actually, that blue is not blue paint - it's a blue weave that's been put through the car's all carbon-fibre bodywork, lending veracity to Pininfarina's claim that "each client's personality [will be] woven into the very fabric of the car."

This Battista is said to be inspired by New York City (so, it's NYPD Blue? - one for fans of early 2000s must-see TV drama, there) and gets a U-S-A red, white, and blue colour scheme, including that Ionica Blu carbon threading, which Automobili Pininfarina is claiming as a world's first.

Sara Campagnolo, Head of Colour and Materials Design, Automobili Pininfarina, said: "The Pininfarina name has a storied heritage of individual cars, and the Battista continues this legacy as every vehicle will be truly bespoke by design. Our clients have the unique opportunity to join the Automobili Pininfarina family, immersing themselves in the design process with our talented craftspeople to ensure their vehicle authentically reflects their personality and tastes, created with a truly personal touch. Clients have the opportunity to drive forward the development of sustainable luxury, whilst creating a unique collector's piece."

Automobili Pininfarina says that each Battista buyer will be invited into a special 'Atelier' space at the Cambiano production facility in Italy, and asked to put their own stamp on, basically, every aspect of their car. It's being described as: "a 360-degree consulting service resulting in a truly unique creation."

The New York car gets very subtle stripes and pinstripes finished in a Bianco Sestriere metallic colour which, because of the complexity of the body panels' shapes, has to be applied by hand. There's also a red "Exterior Jewellery Pack" along with a "Furiosa Carbon Accent Pack" finished in Pininfarina's Black Exposed Signature Carbon.

The wheels, whose design is called 'Impulso' (men just can't help acting on Impluso... One for the fans of eighties perfume ads, there), are Dark Matt Grey with brushed aluminium centre-lock ring anodised in black. Those match the black Goccia roof, rear diffuser, rear wing and brushed aluminium headlight engraving.

Inside, there's leather and Alcantara with contrast stitching, an "interior jewellery pack" and "fine aluminium interior detailing. Pininfarina claims that there are, wait for it, 128-million (cue Dr Evil finger - one for fans of late nineties Mike Myers comedy spoofs there. [Stop this now. Ed.]) possible combinations of interior trim and decoration, so the chances of meeting another Battista owner with exactly the same combination are vanishingly slim. It happens all the time at Cars & Coffee, we suspect...

Customise all the things

This particular car has Pilota seats finished in black leather upholstery with Iconica Blu Alcantara with navy colour inserts. To set everything off, there's Iconica Blu stitching with unique red and white cross stitch, red headrest logo and unique white seatbelts, with Iconica Blu thread on the back of the carbon seats. The brushed aluminium trim gets a subtle red highlight, while other parts are covered with anodised black aluminium. If you like, and have the requisite budget, even the engravings on the Battista chassis plate, located between the seats, can be personalised, along with a custom passenger-side door plate engraving.

"The uniqueness and exclusivity offered by the Bespoke programme will enhance Battista's investment status, adding to Automobili Pininfarina's rich history in crafting motoring masterpieces. The Cambiano production headquarters will house a new Atelier where clients will be invited to immerse themselves in the creation of their one-of-a-kind vehicle with the car's designers.

"The new suite will be located alongside the production line, where skilled technicians will assemble the Battista - under the same roof as the historic and priceless Pininfarina models spanning 91 years of production. With a carefully curated selection of historic and classic vehicles on display in the neighbouring museum, the new Atelier in Cambiano will serve as a rich hub of exquisite collectable vehicles to inspire the next generation of pure-electric automotive creations," said Automobili Pininfarina in a statement.