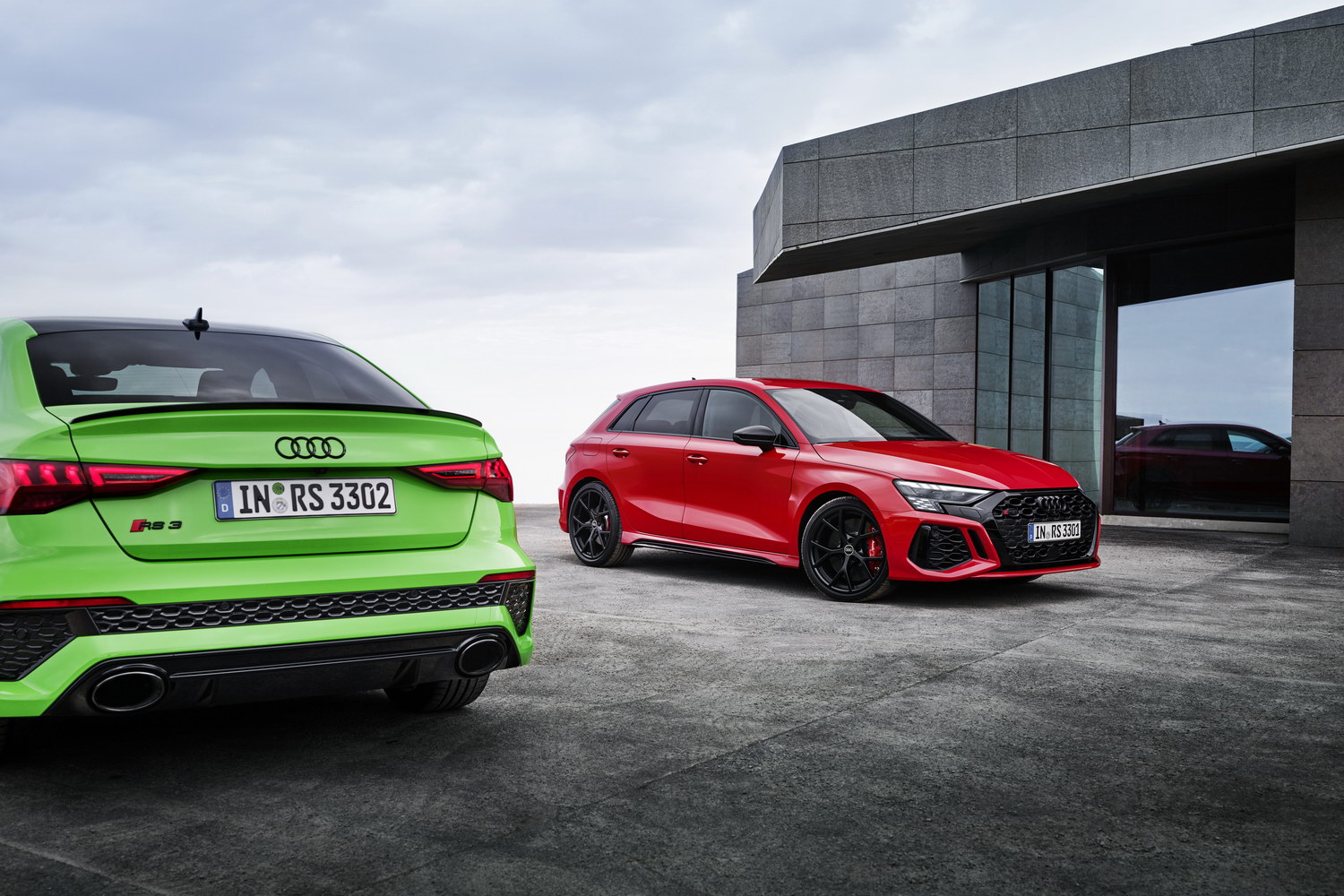 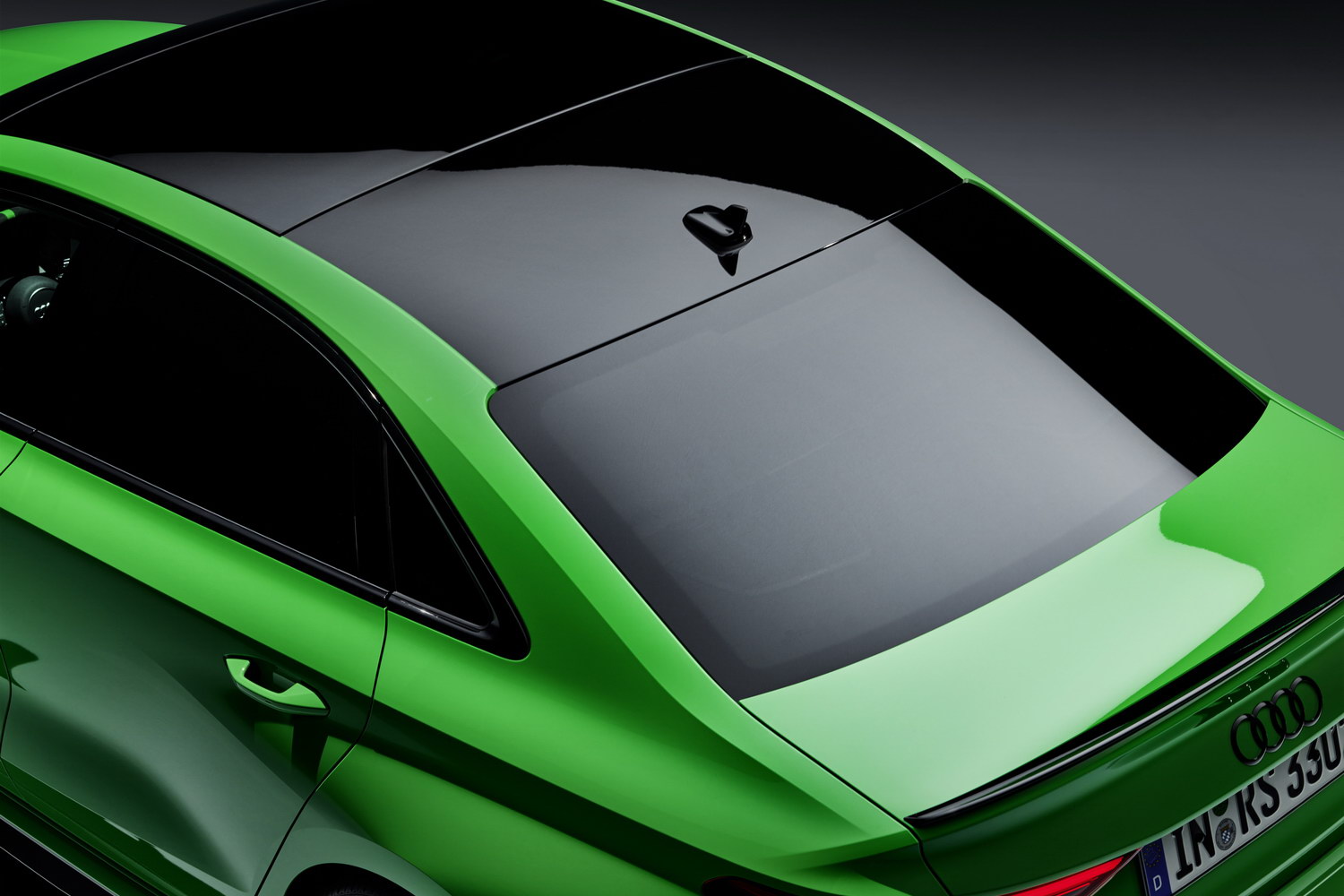 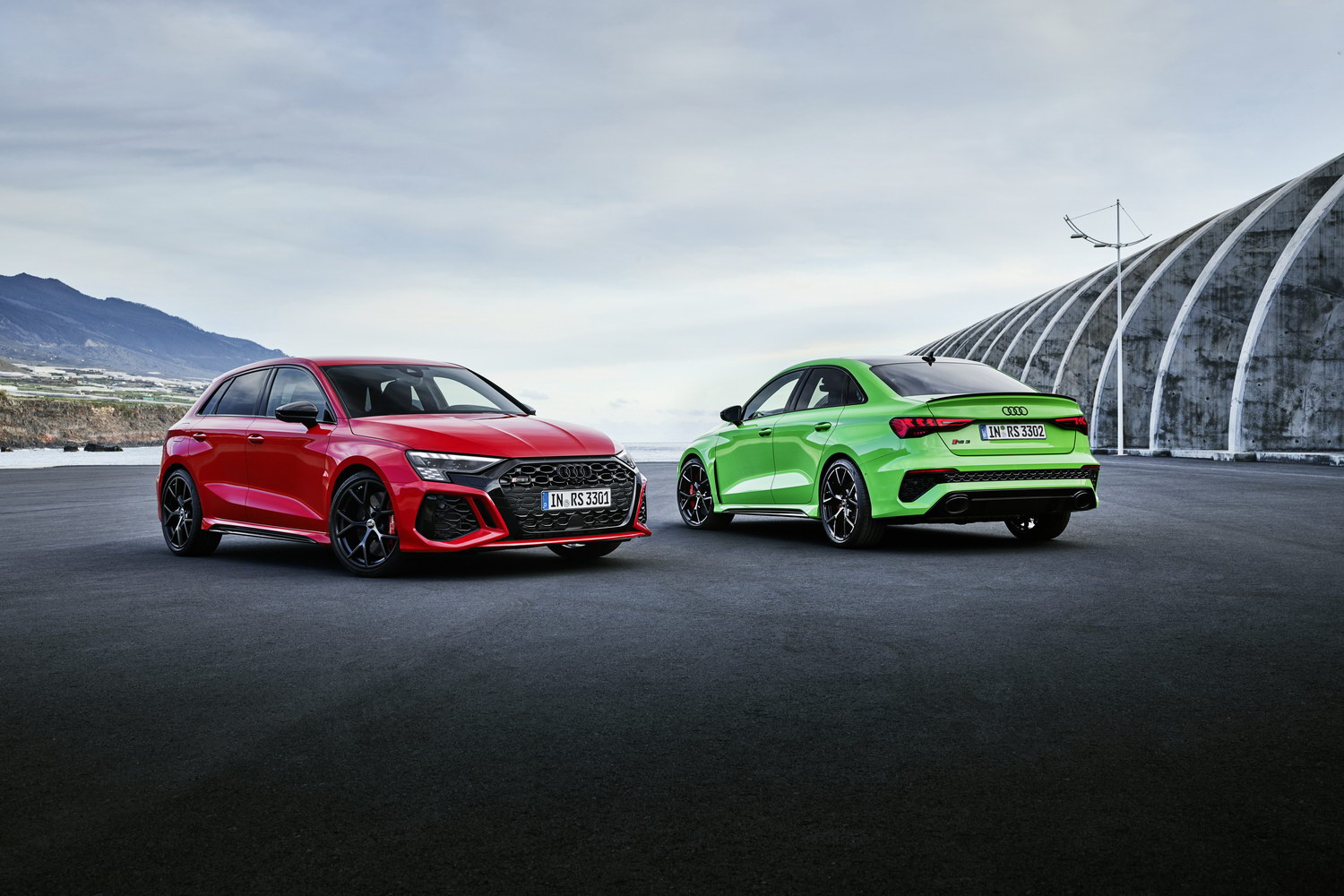 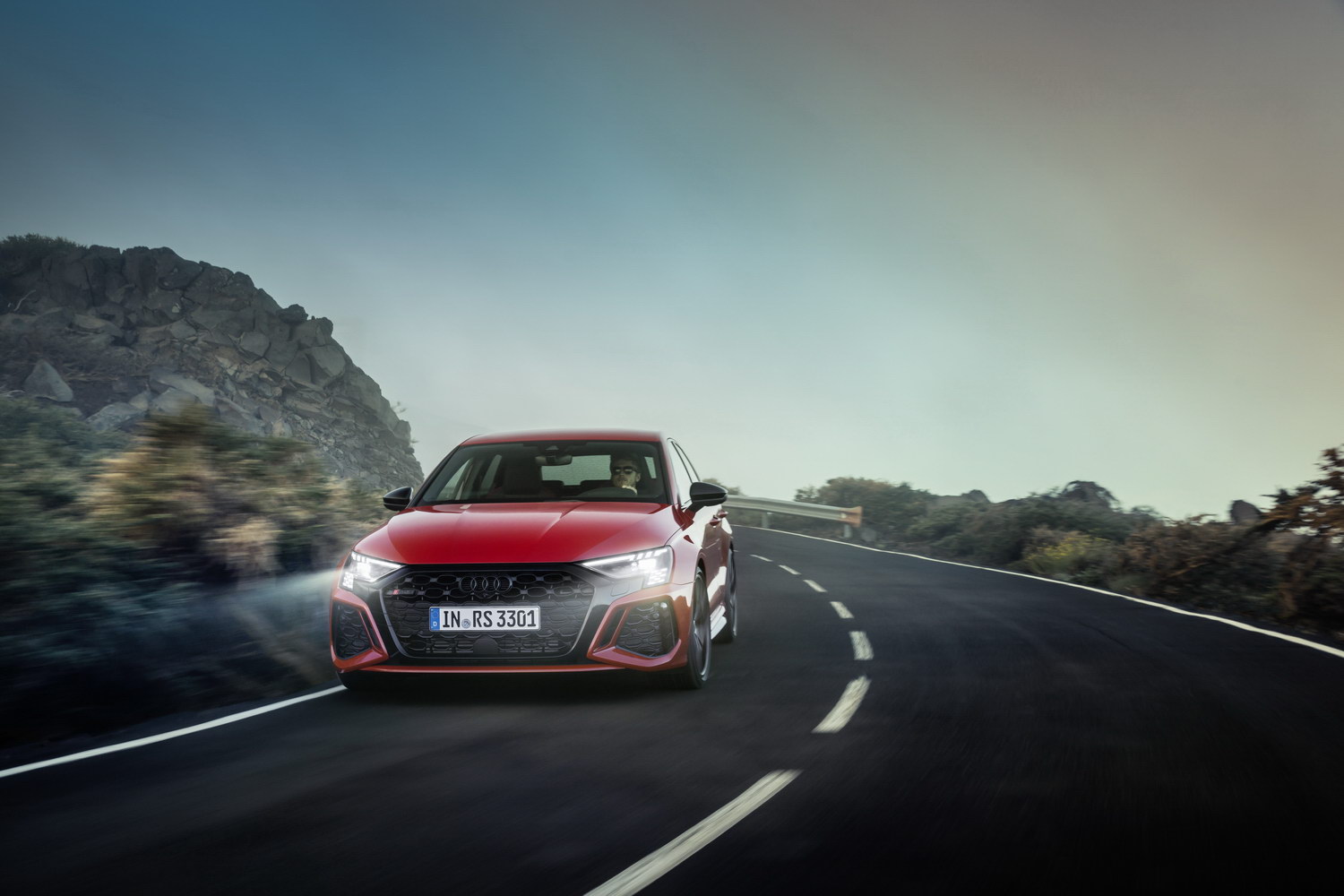 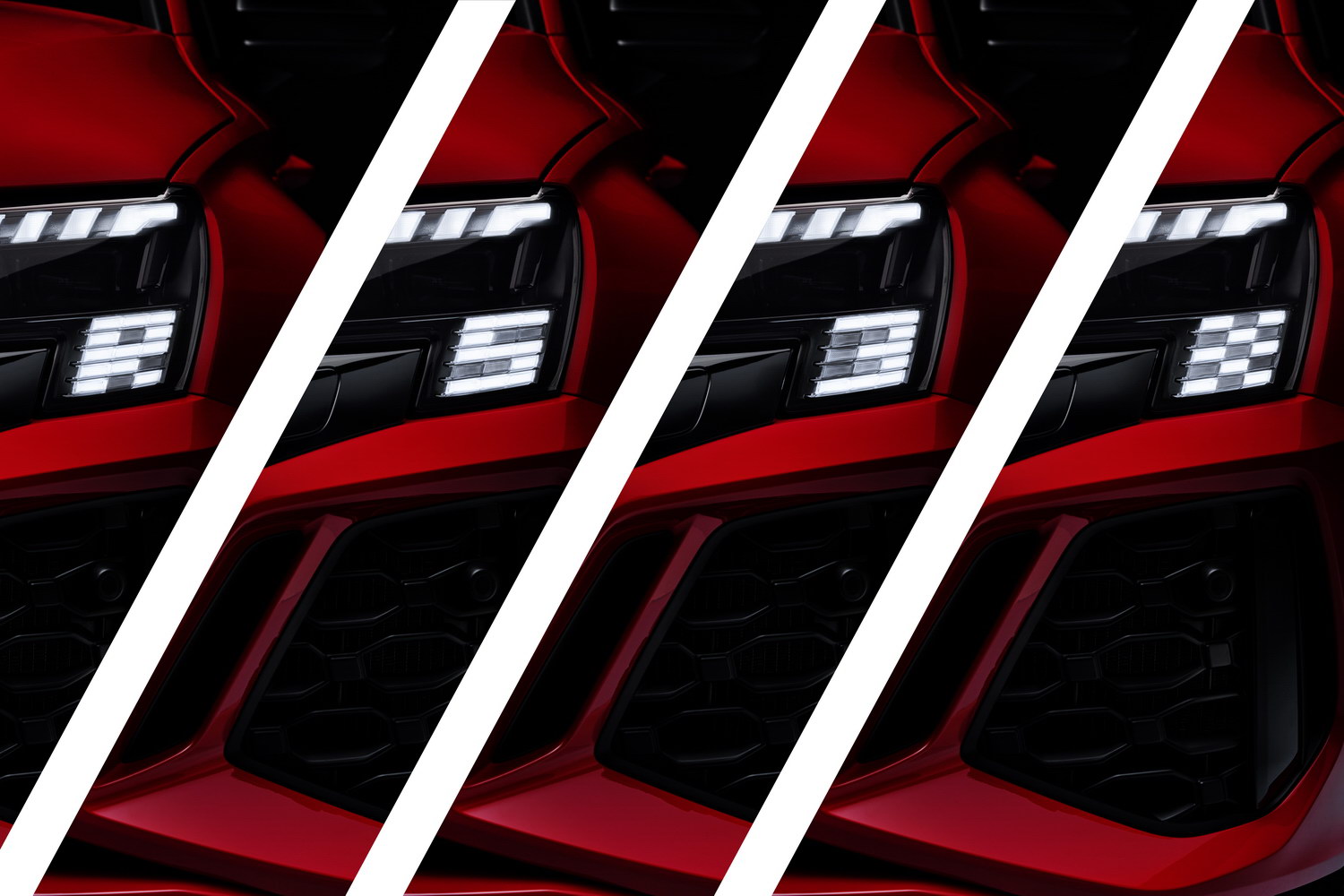 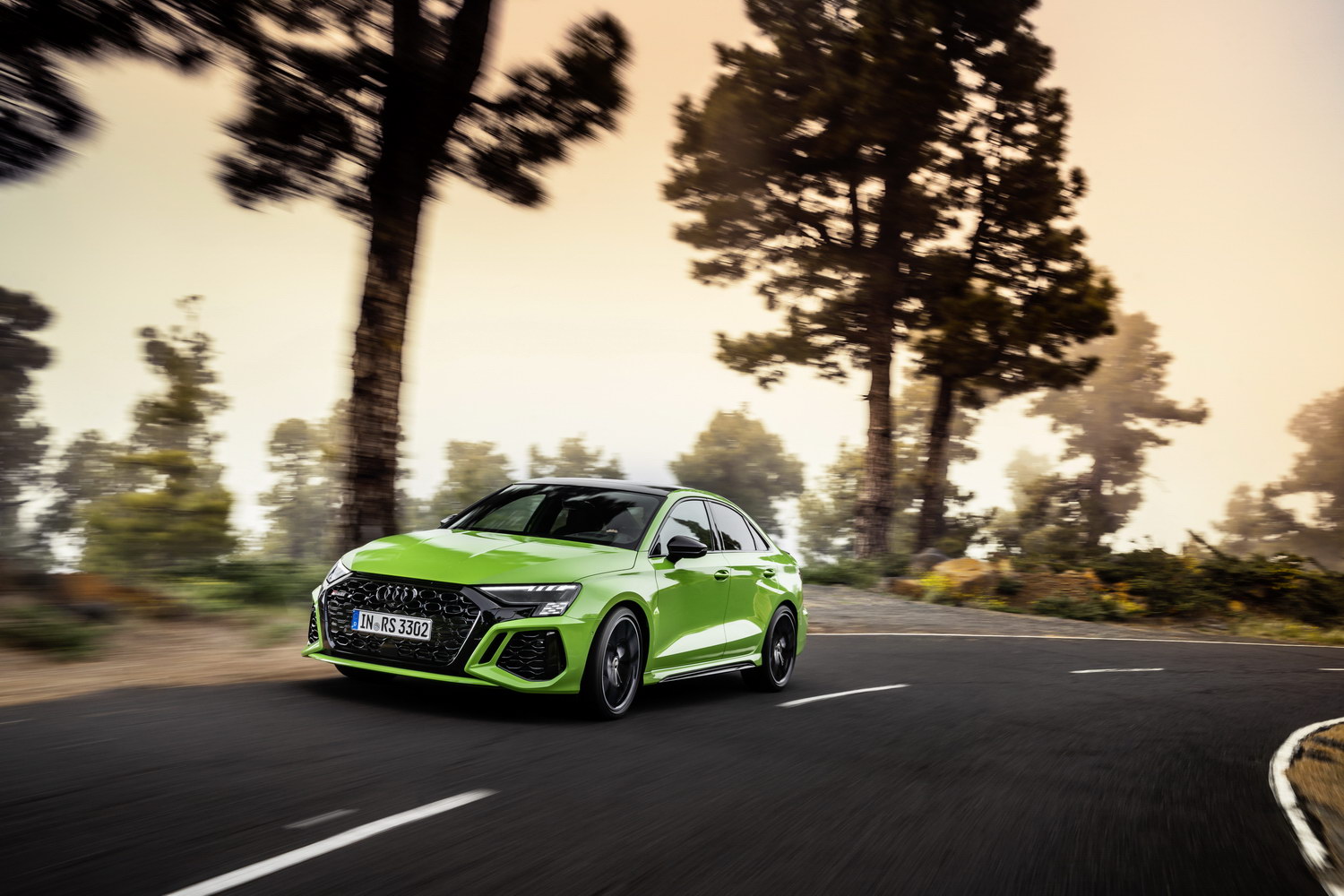 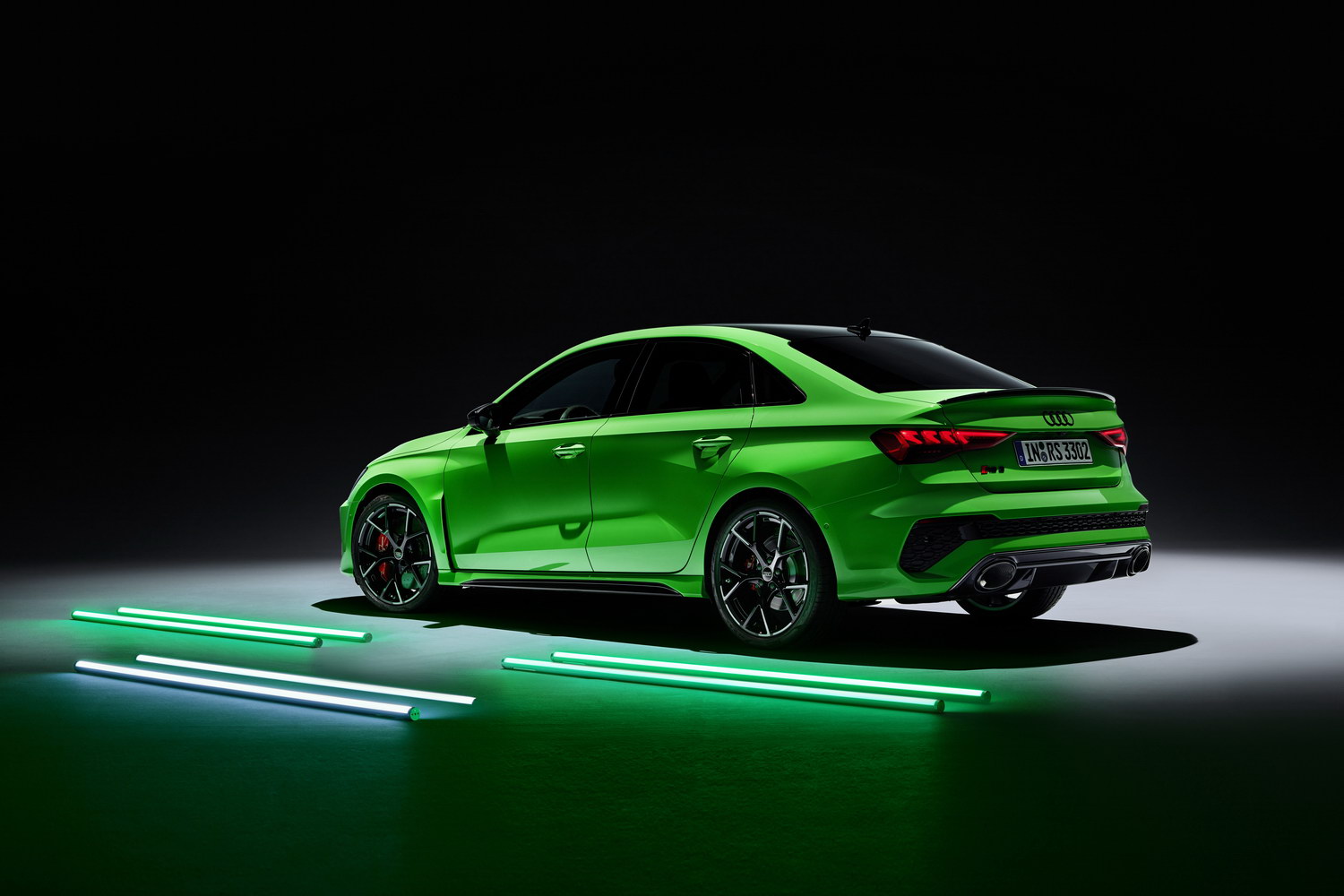 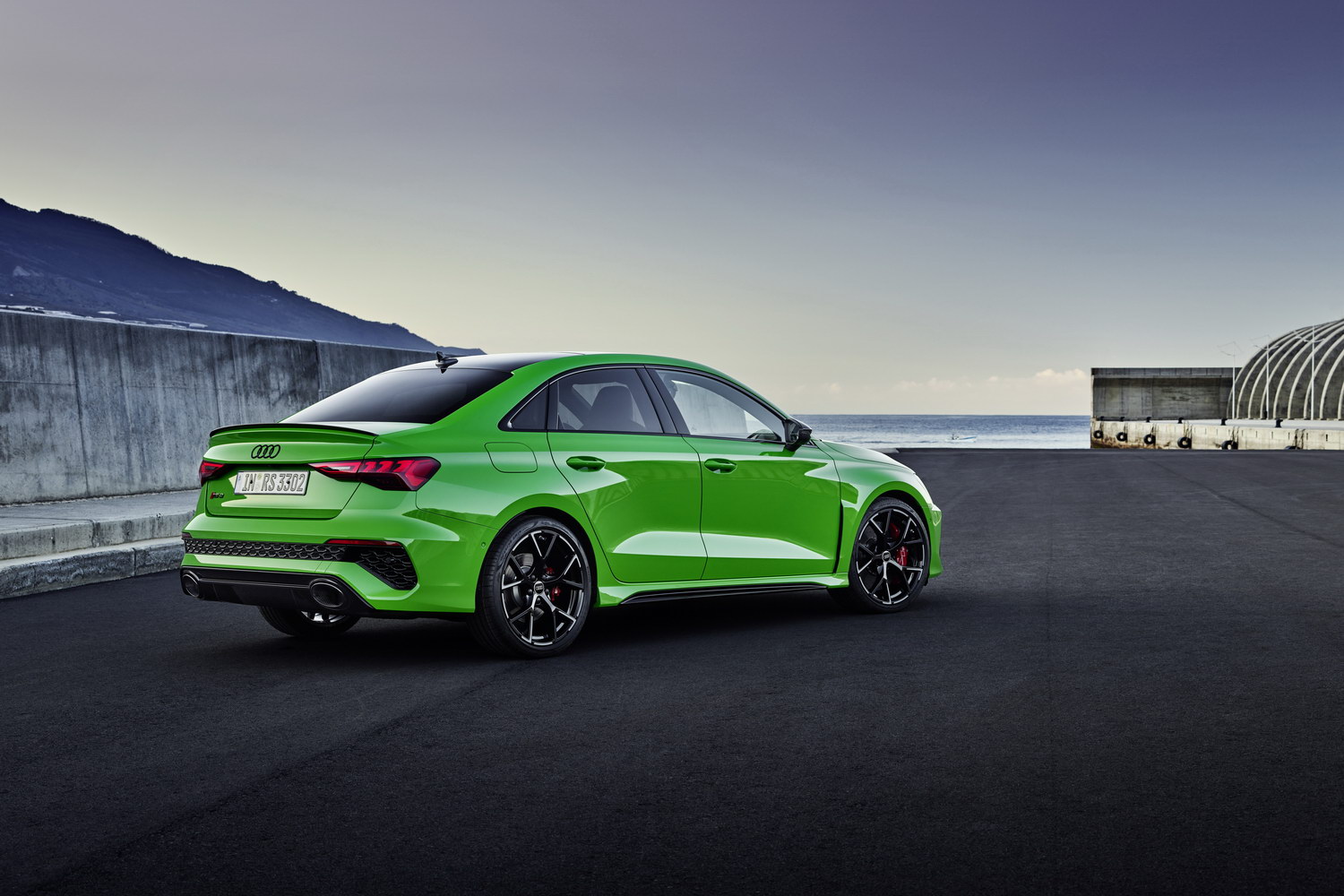 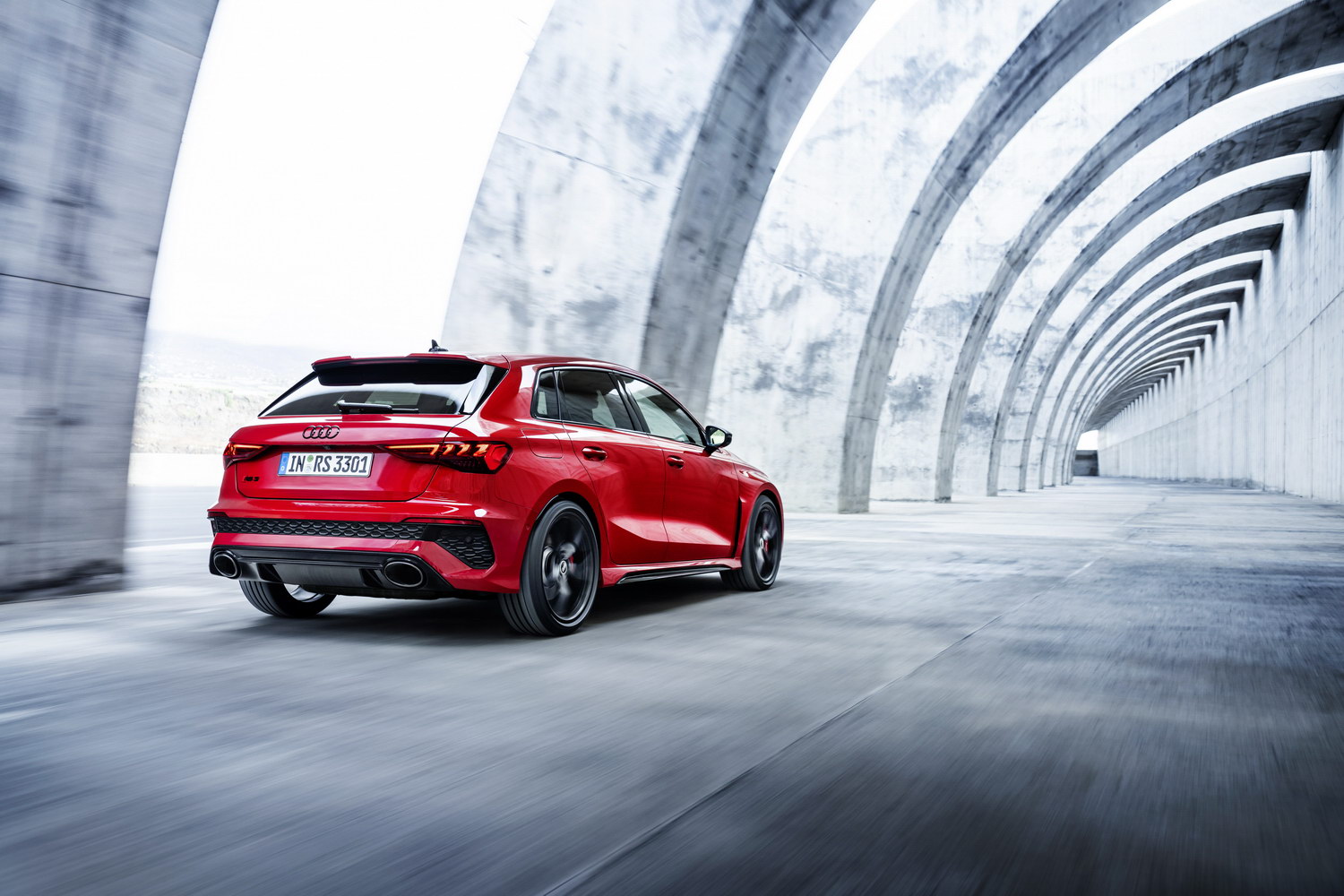 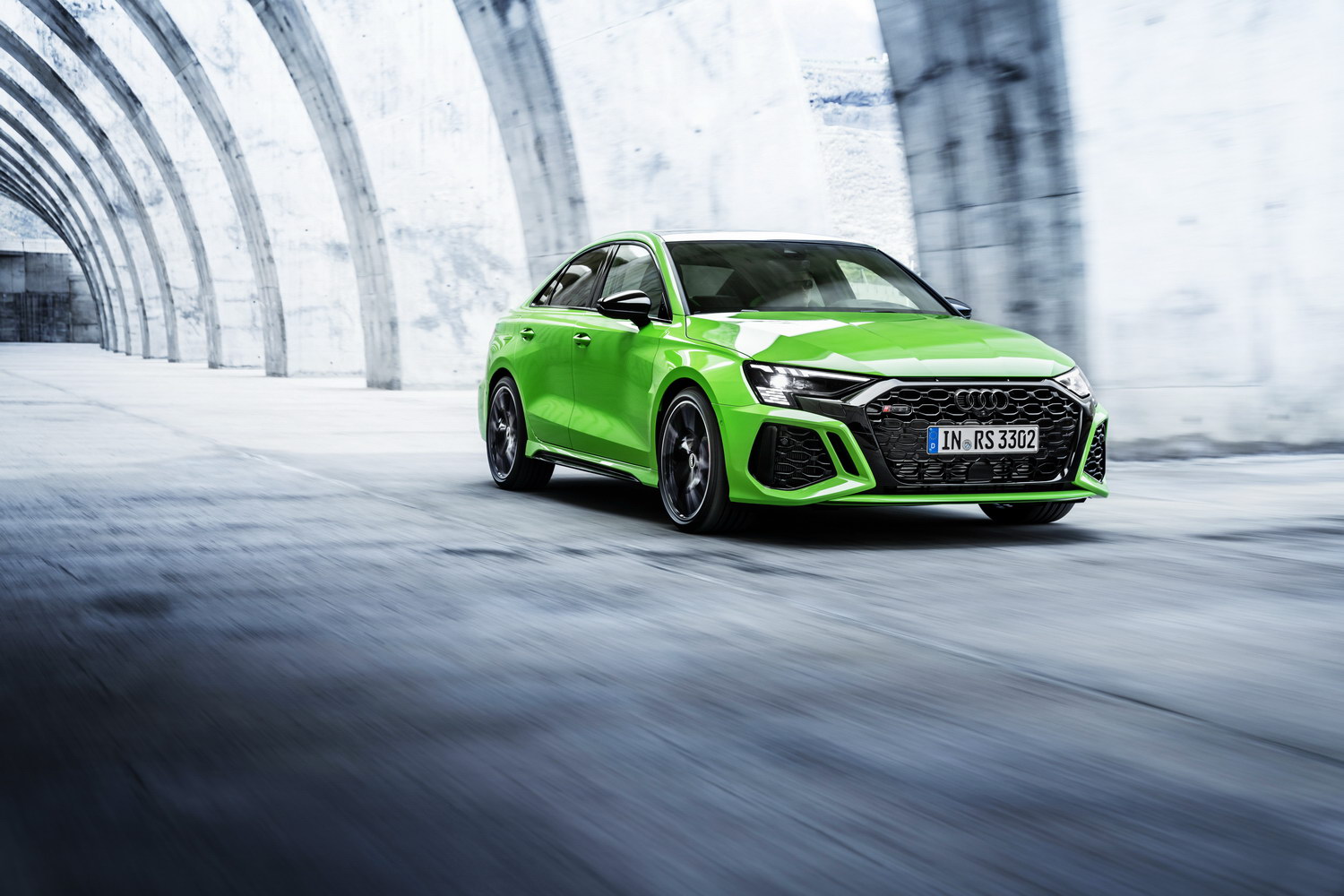 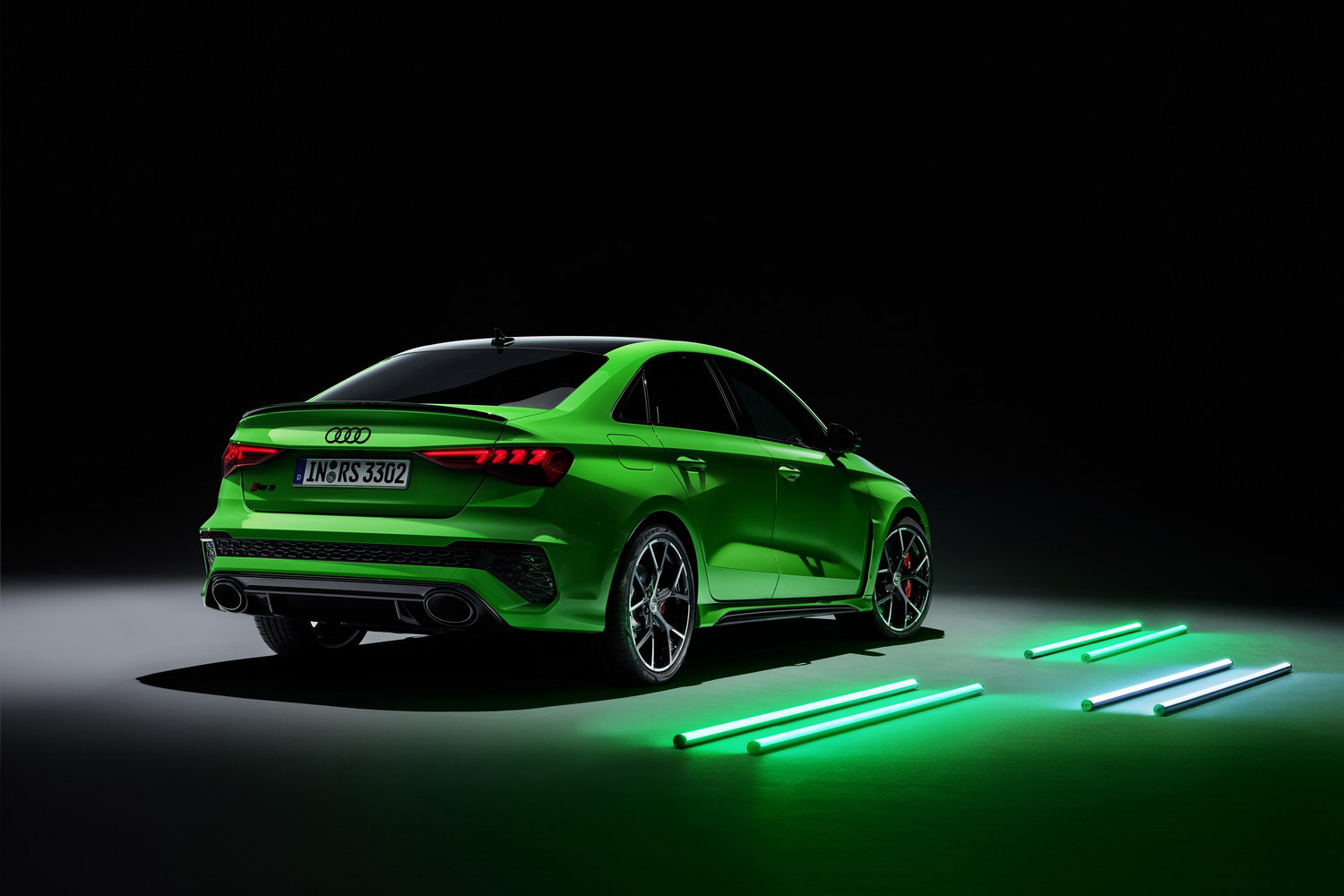 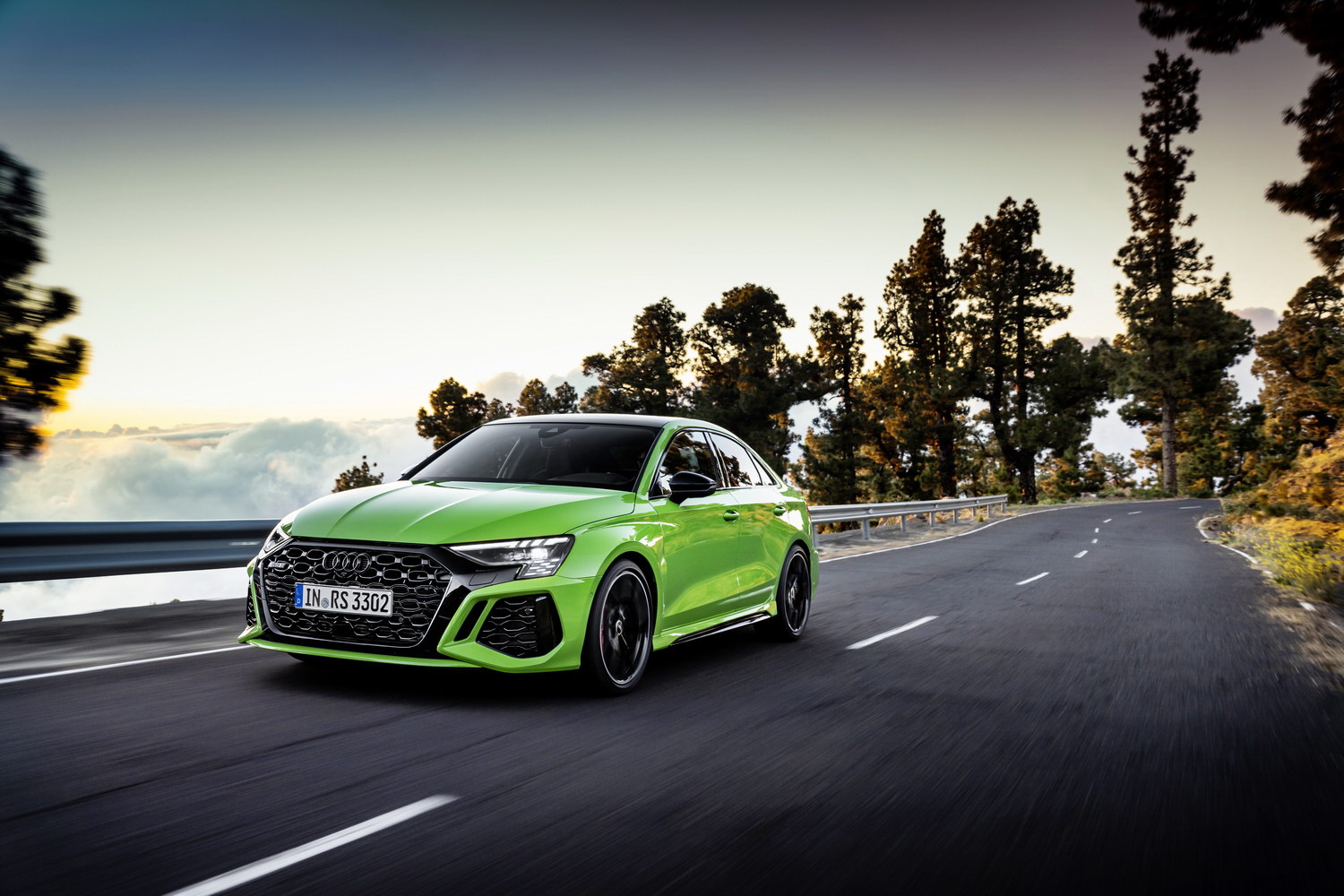 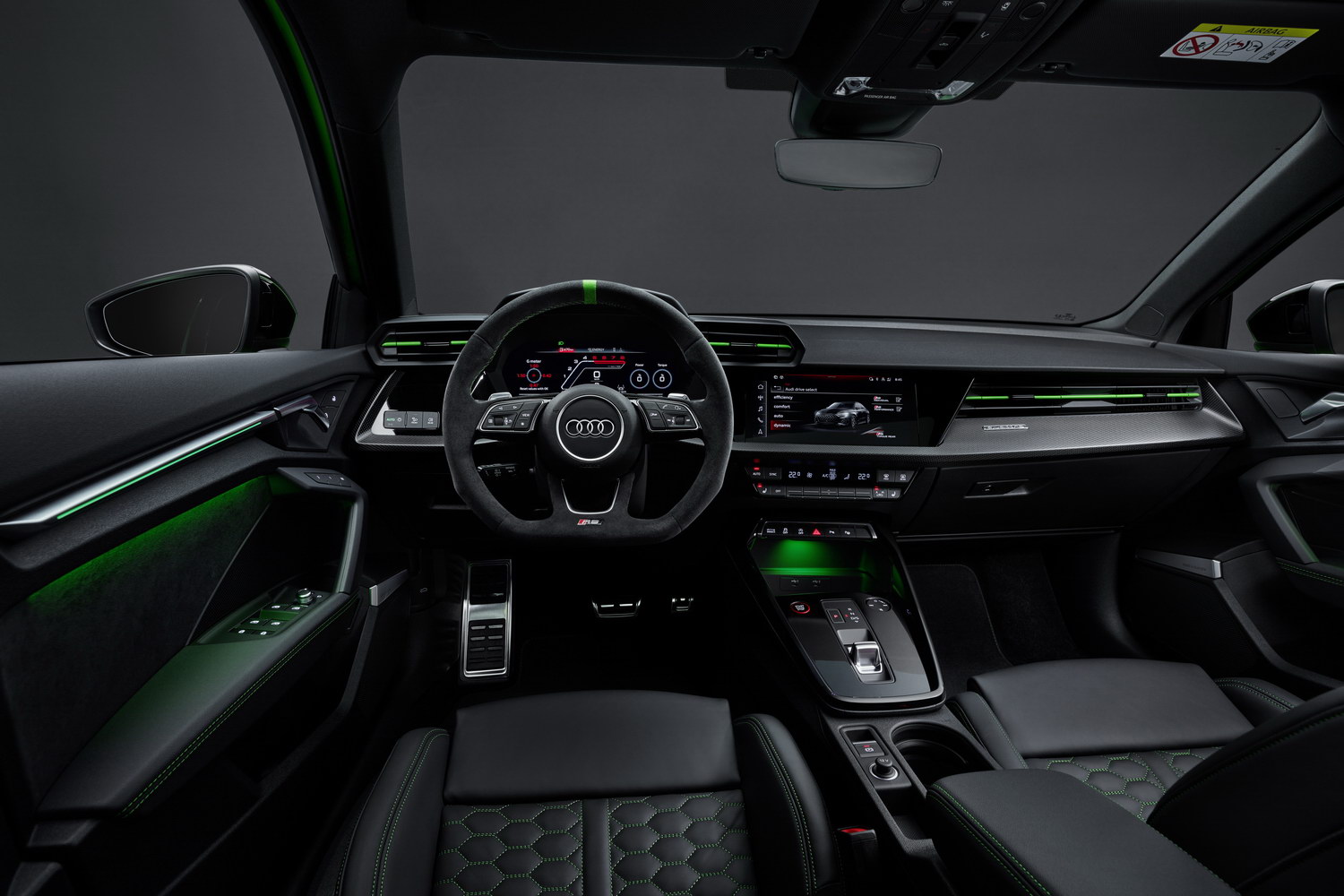 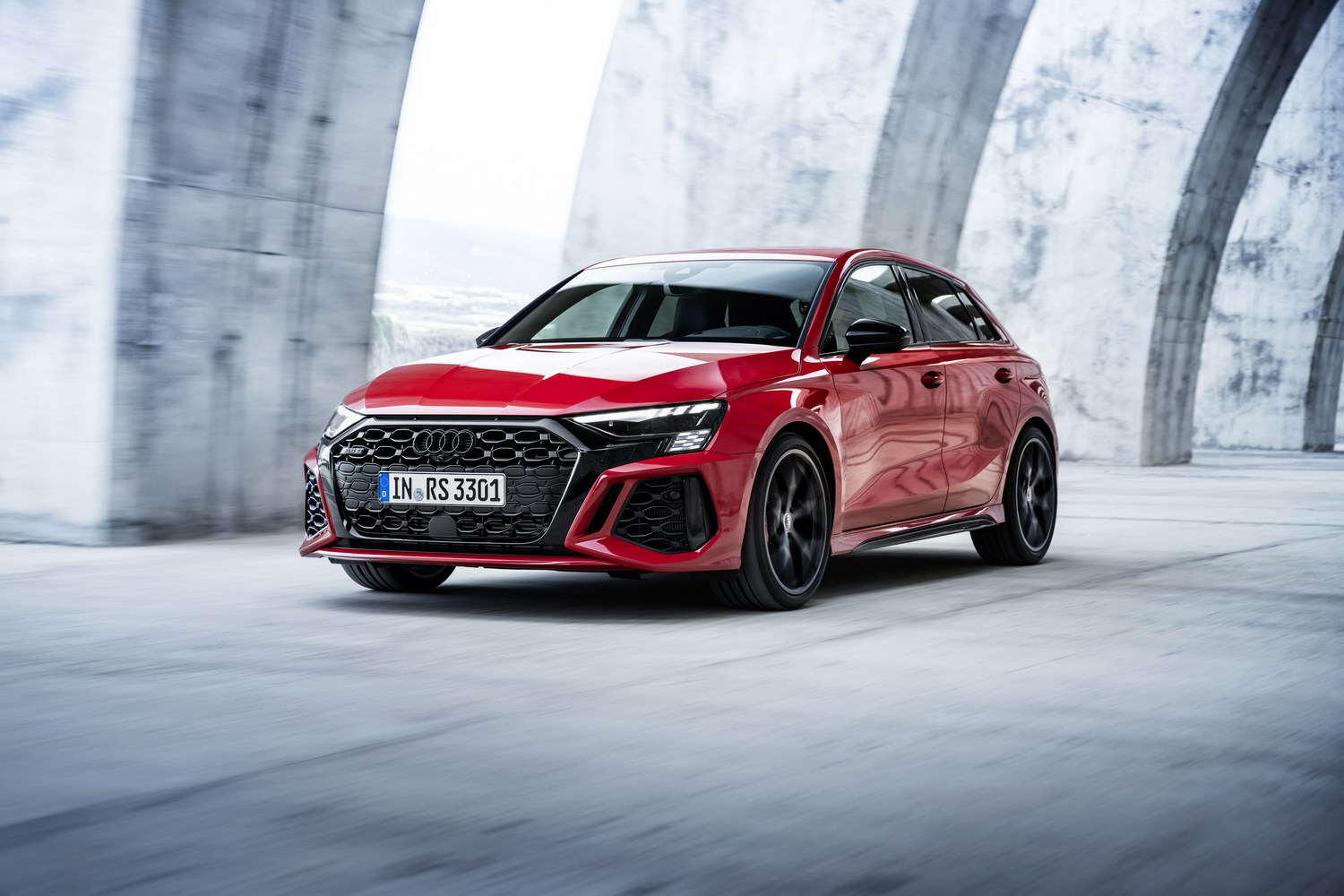 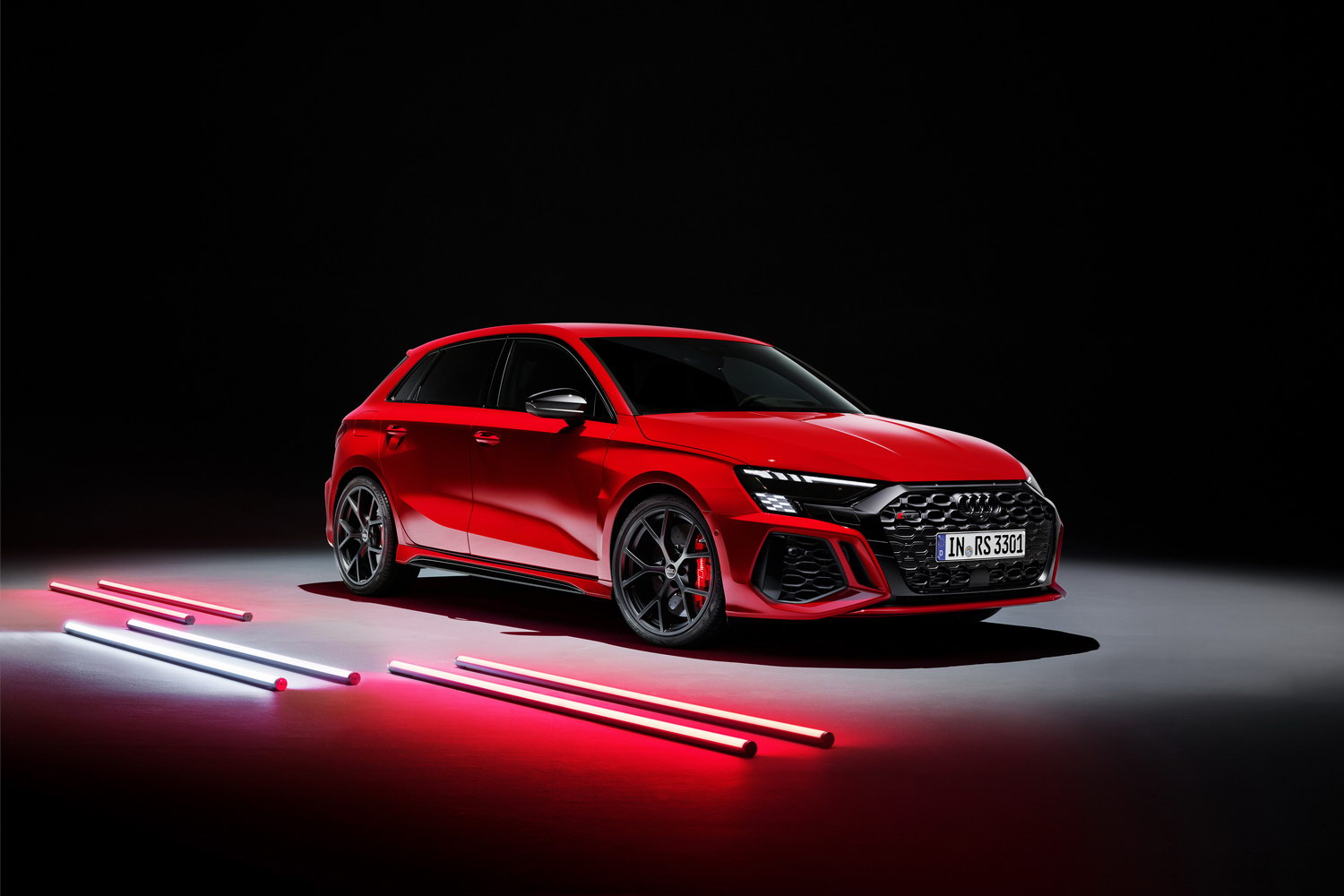 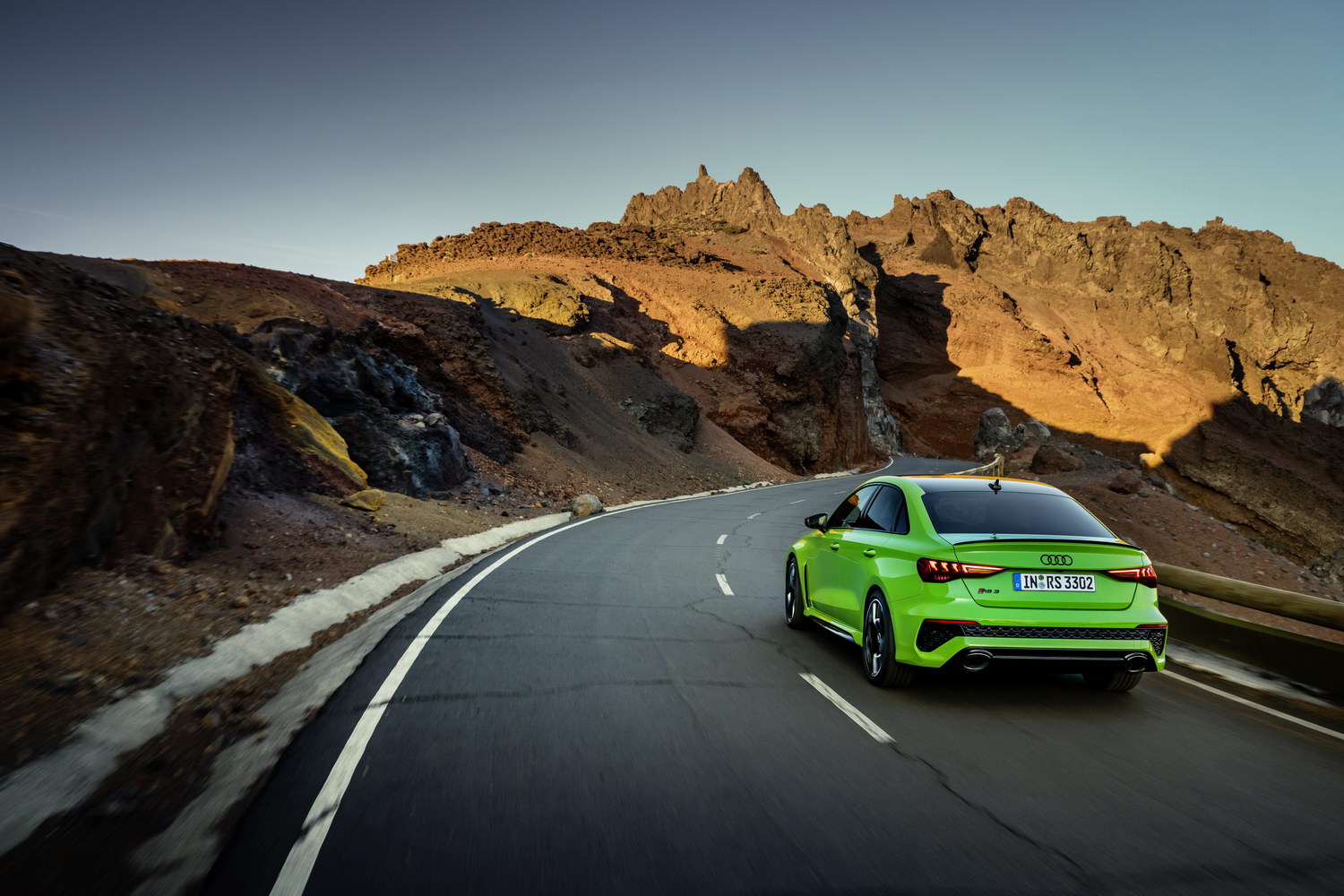 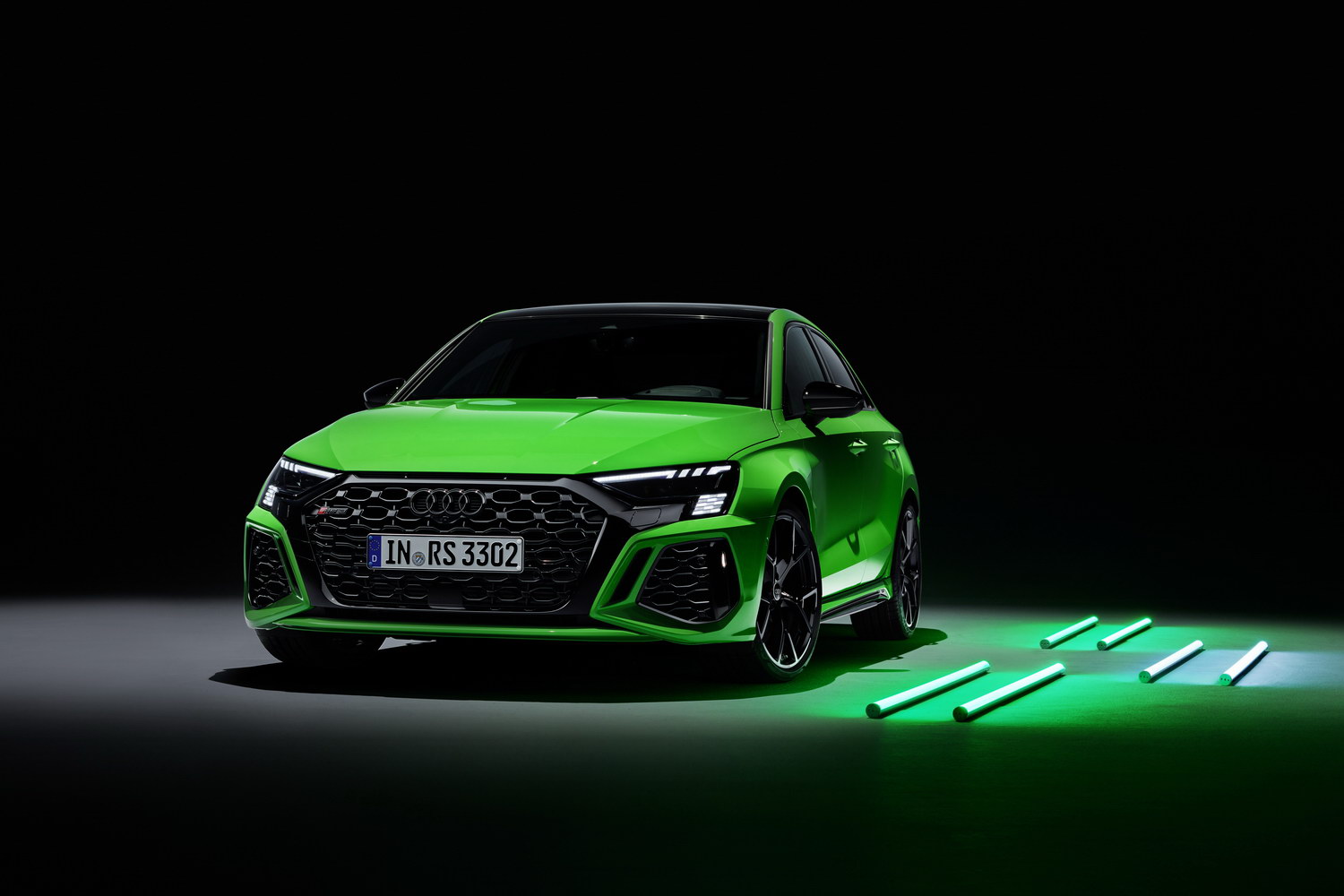 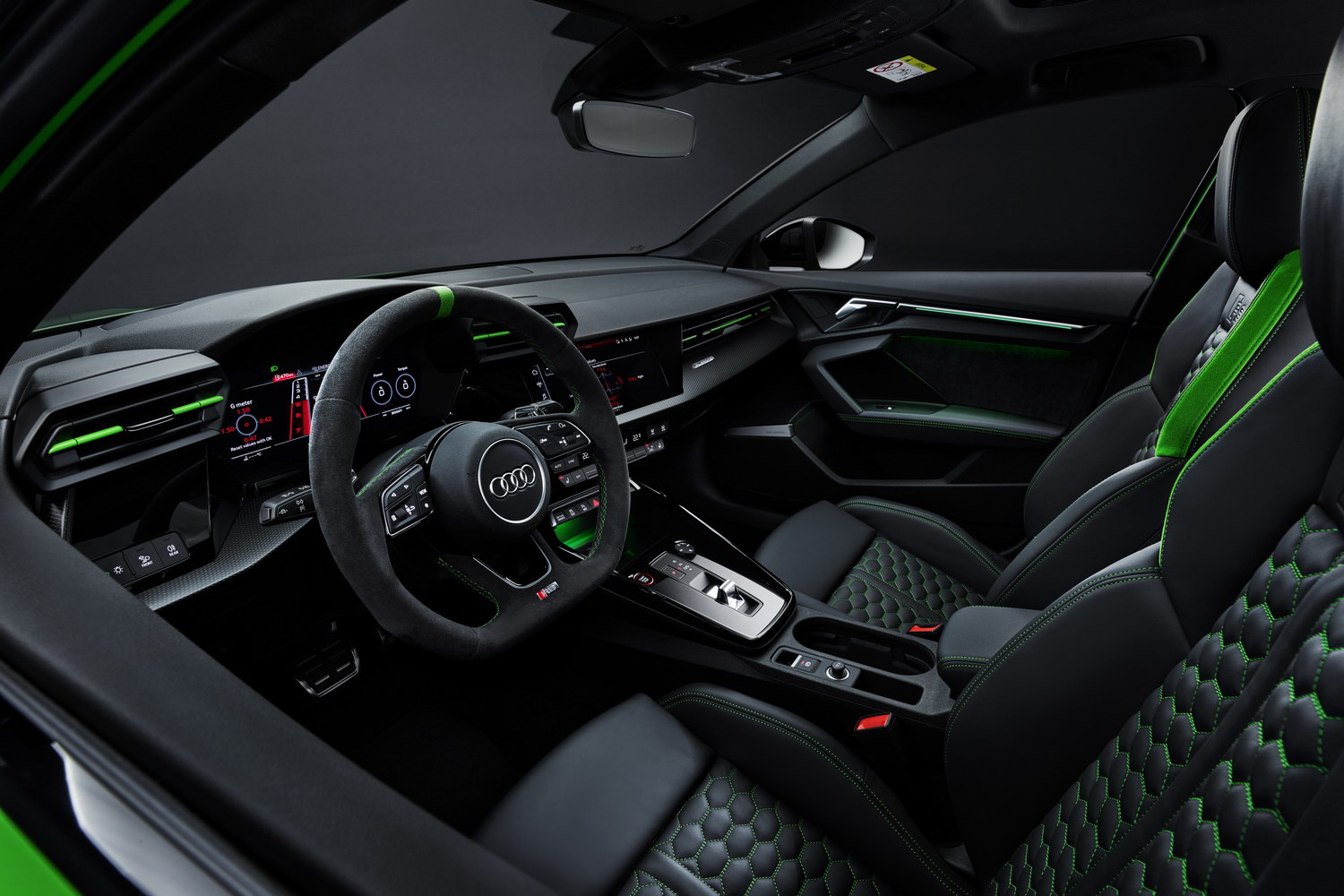 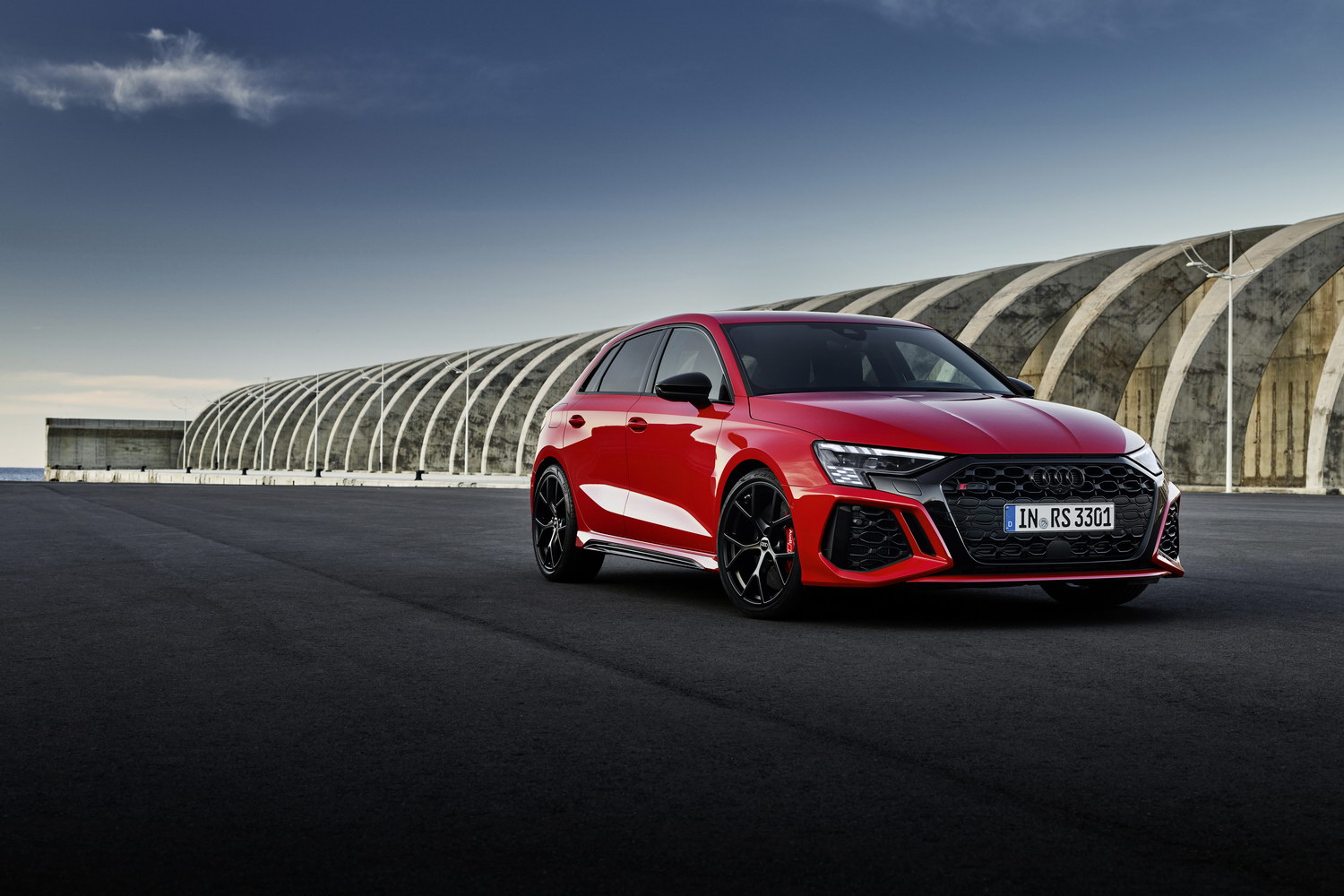 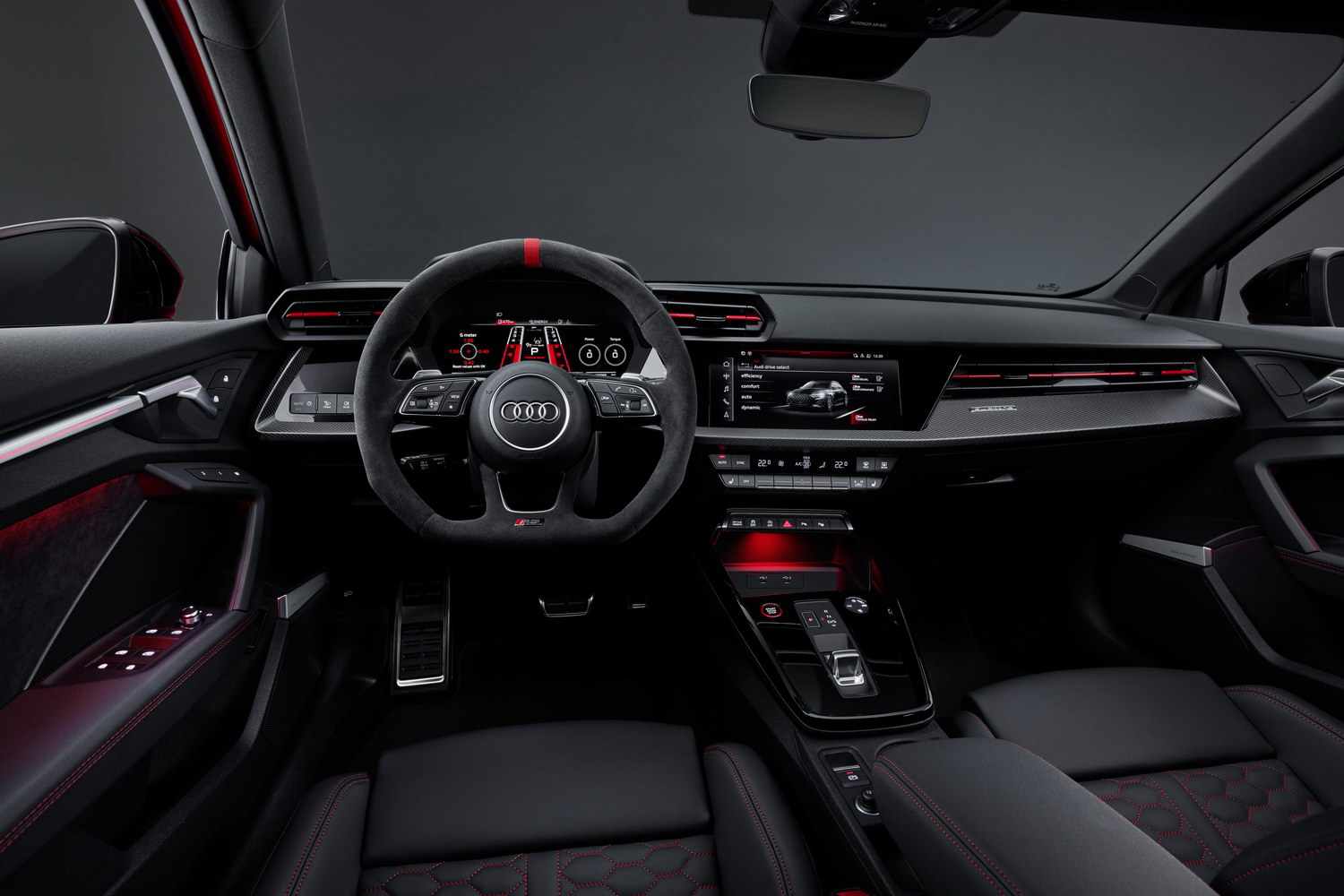 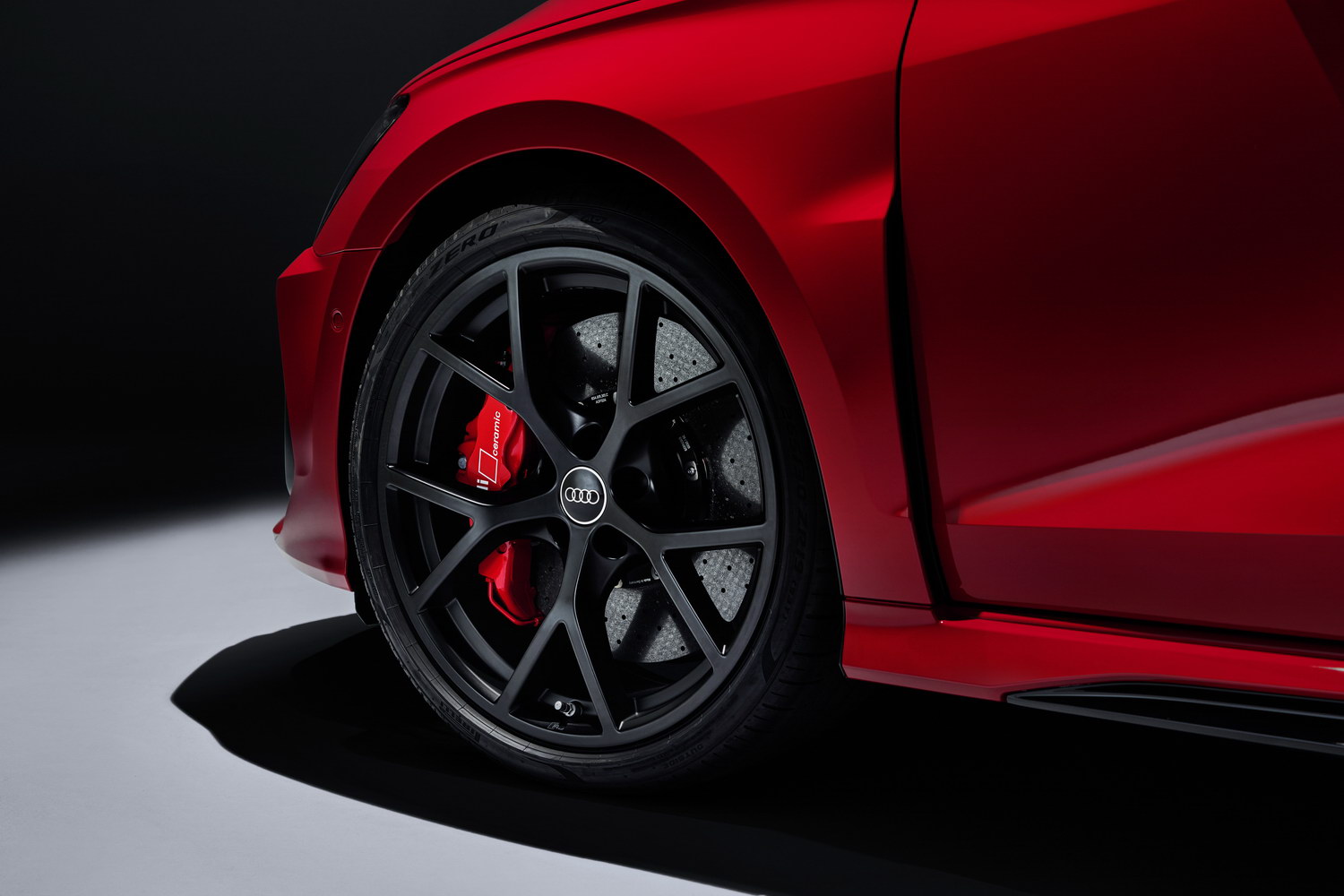 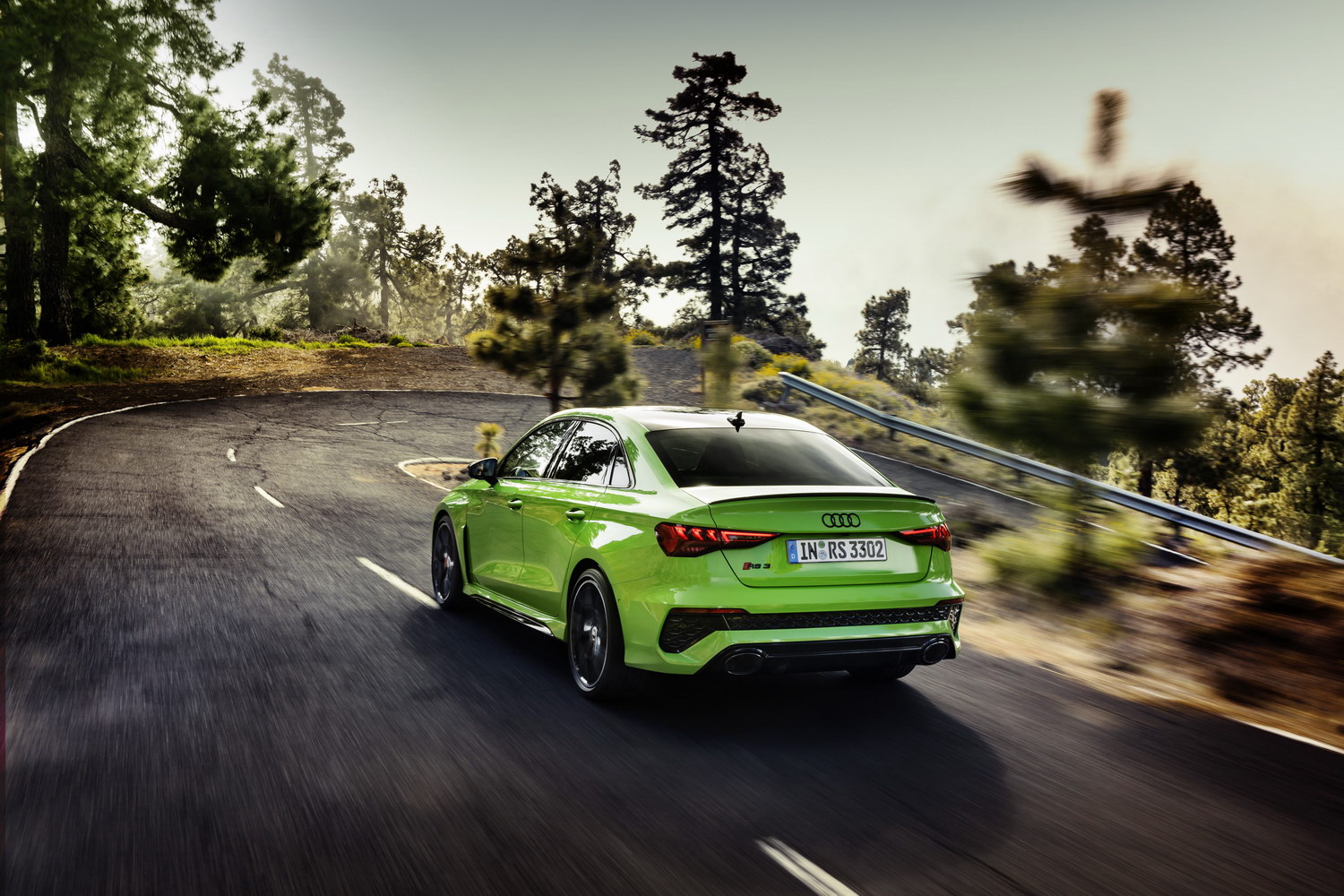 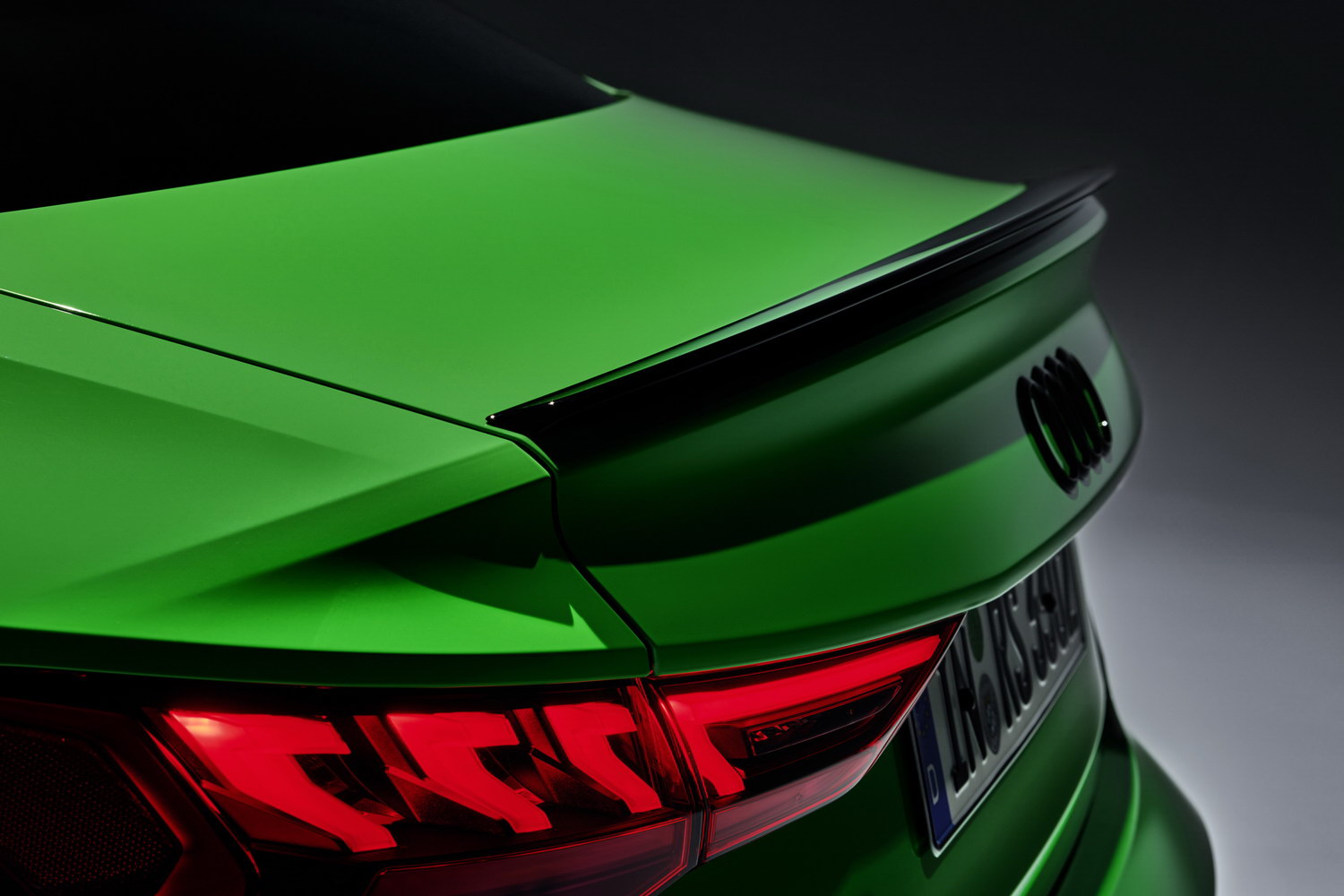 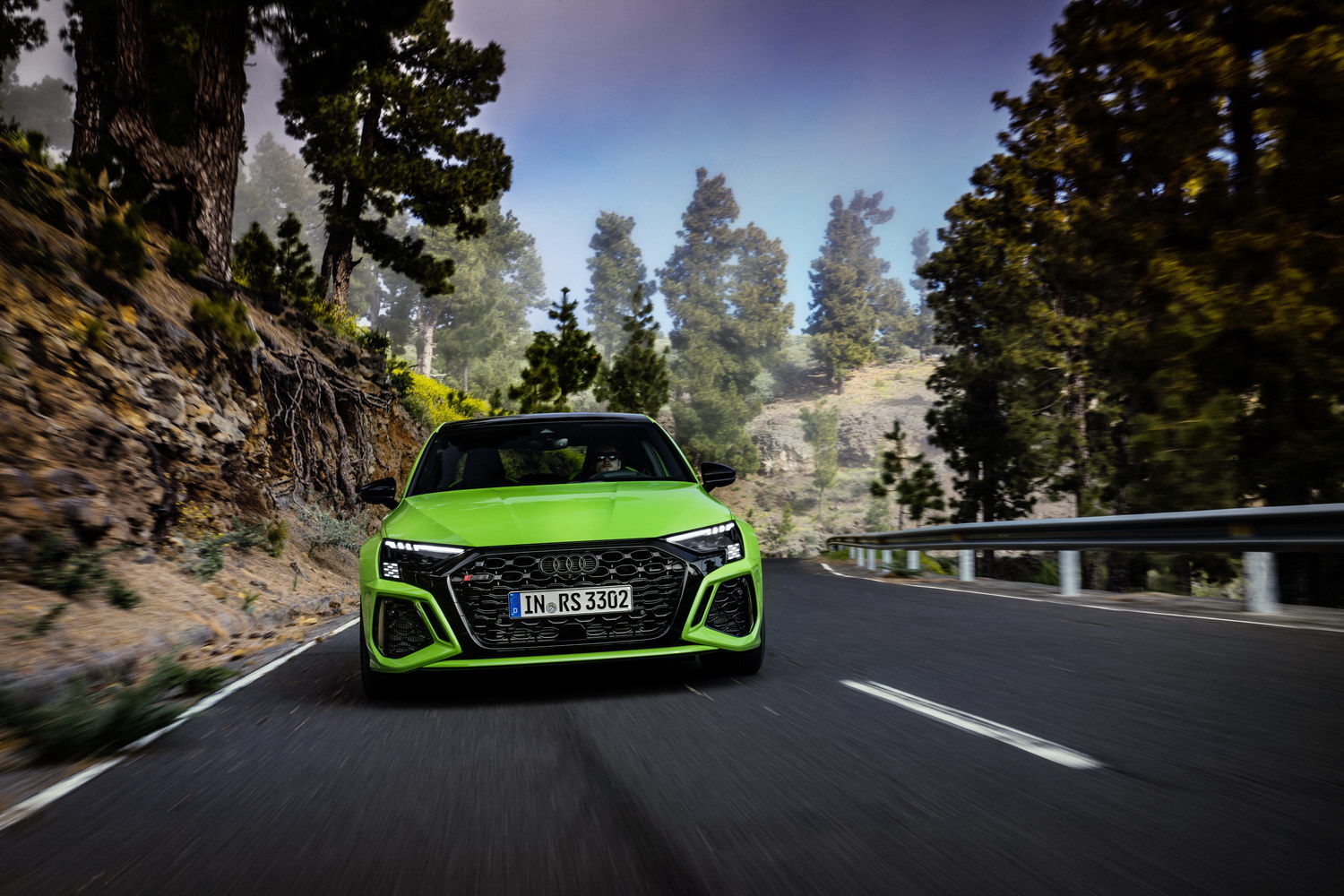 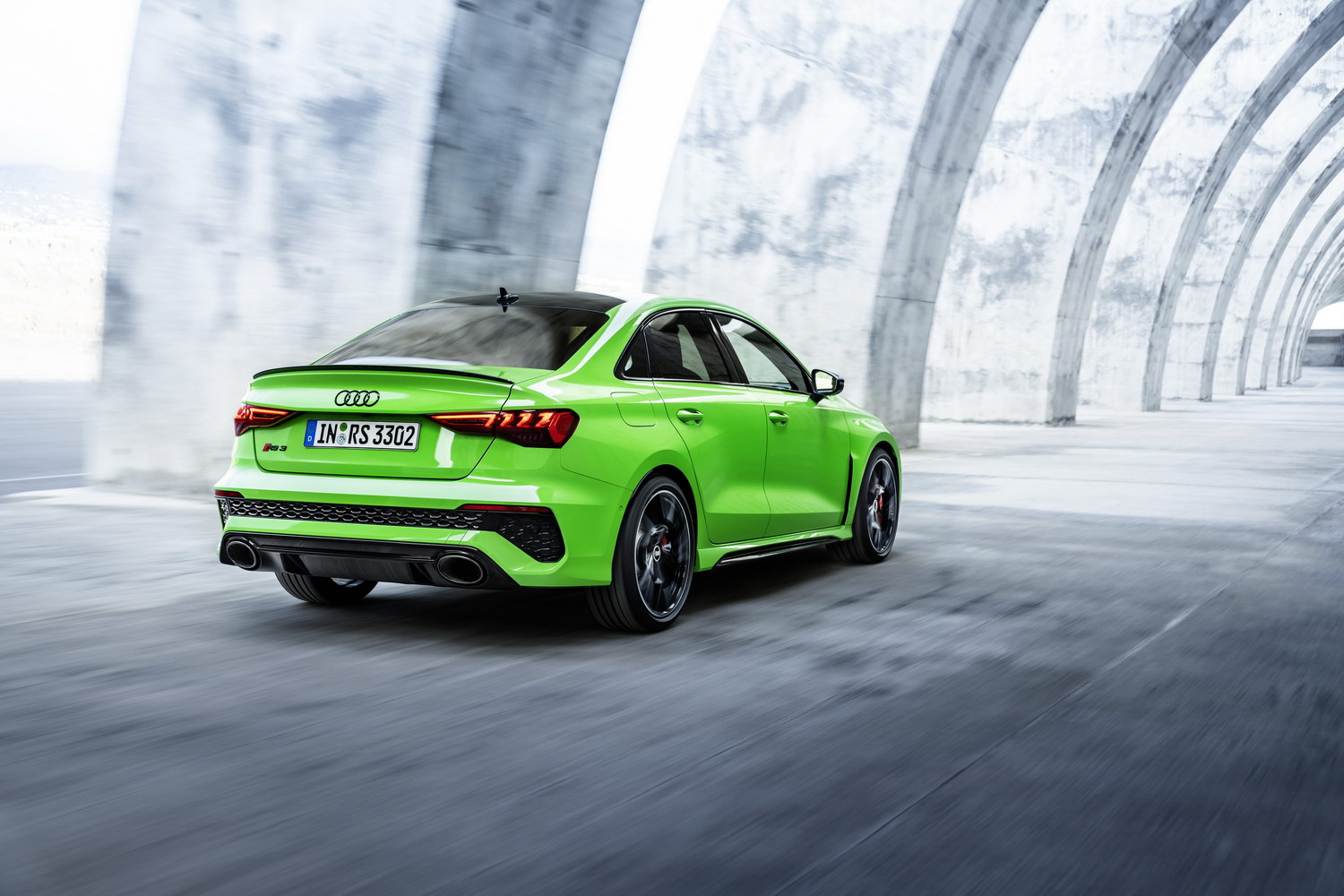 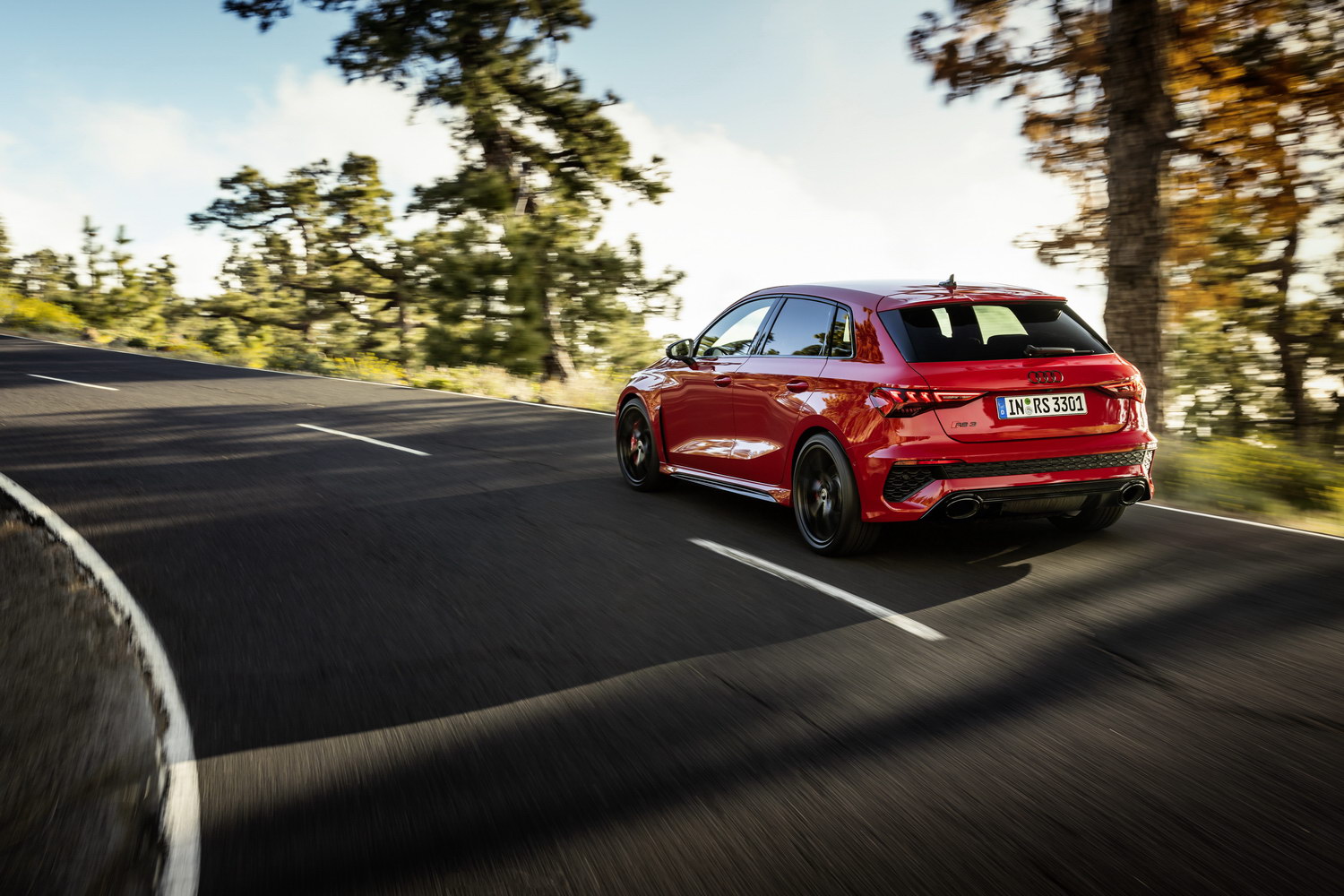 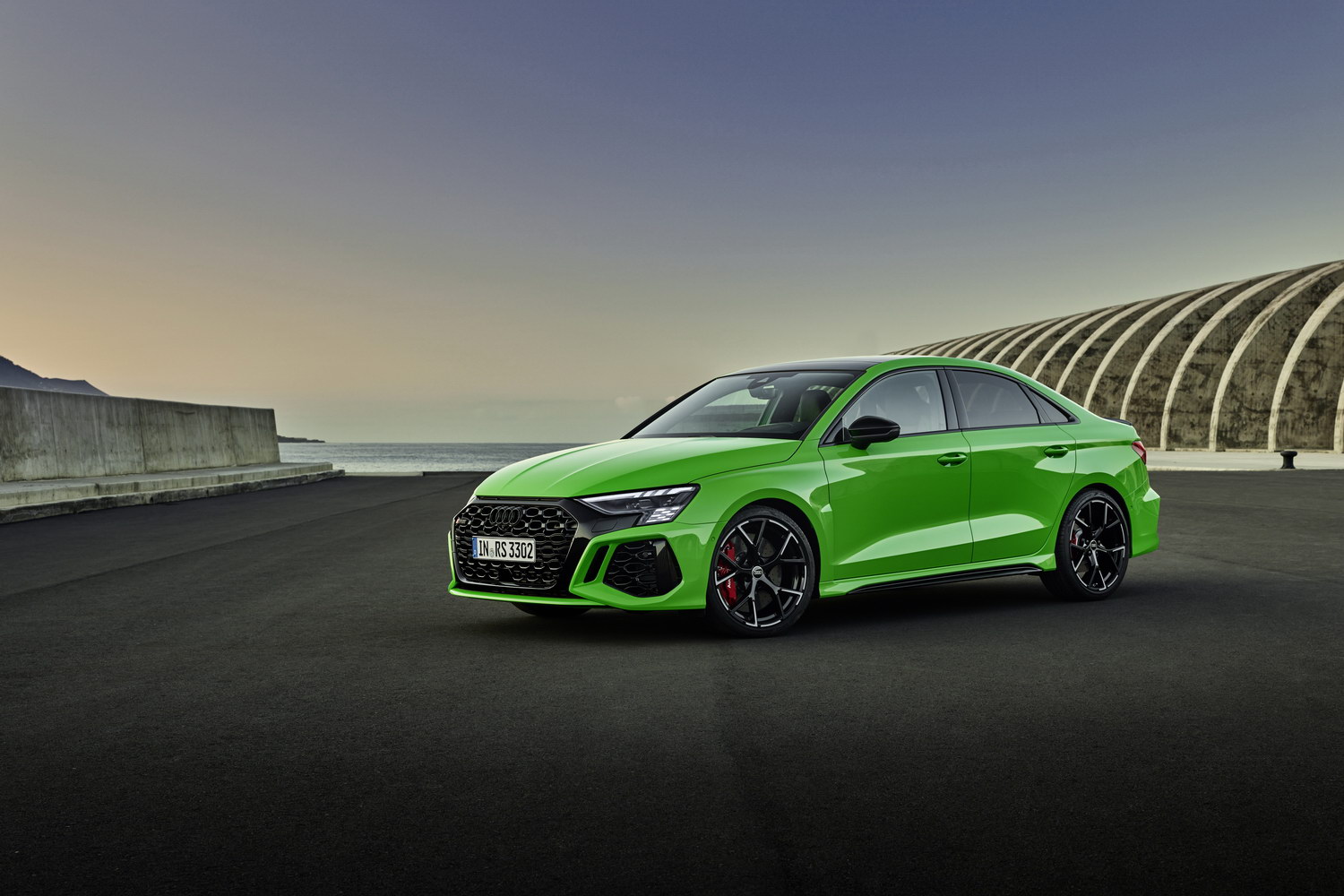 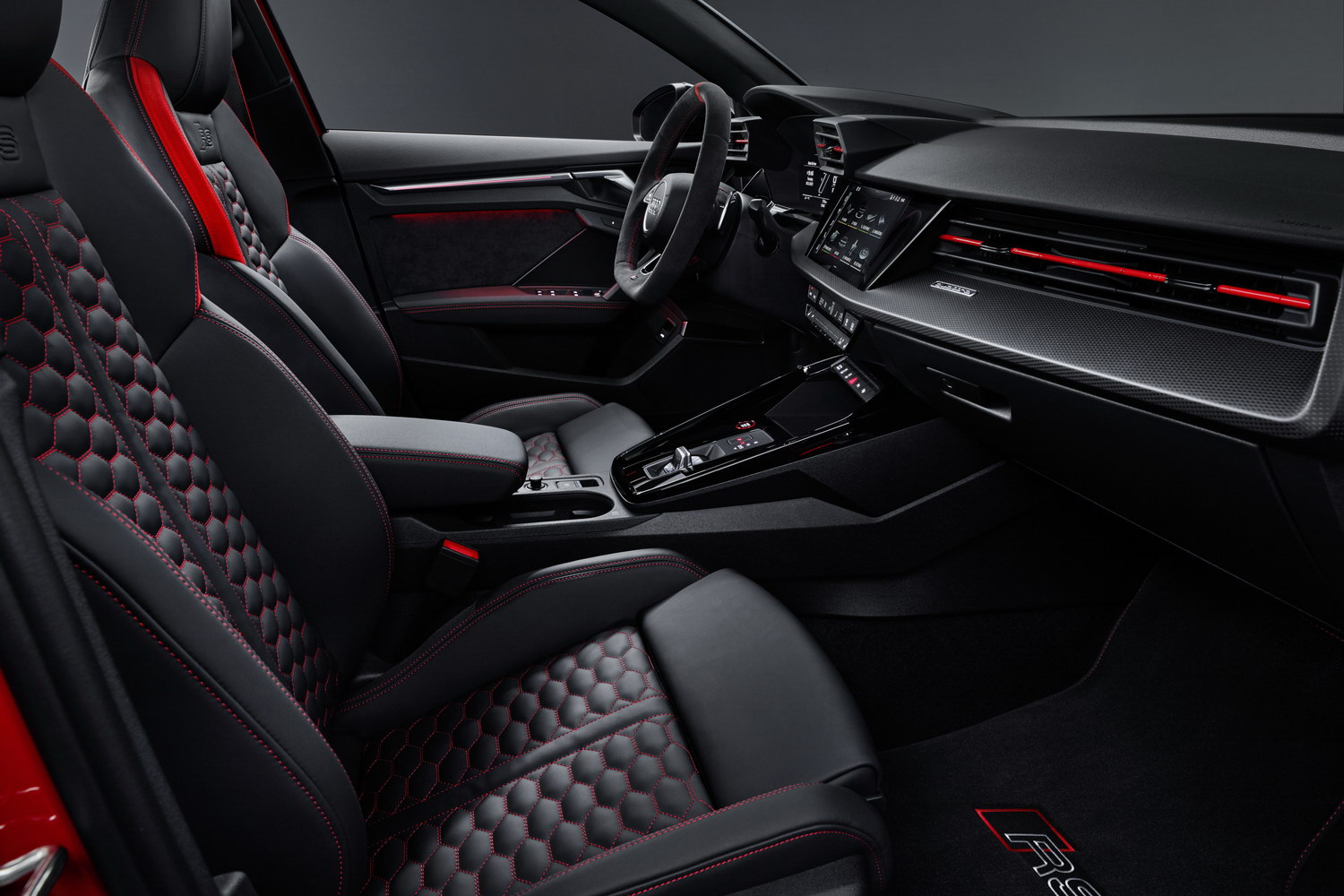 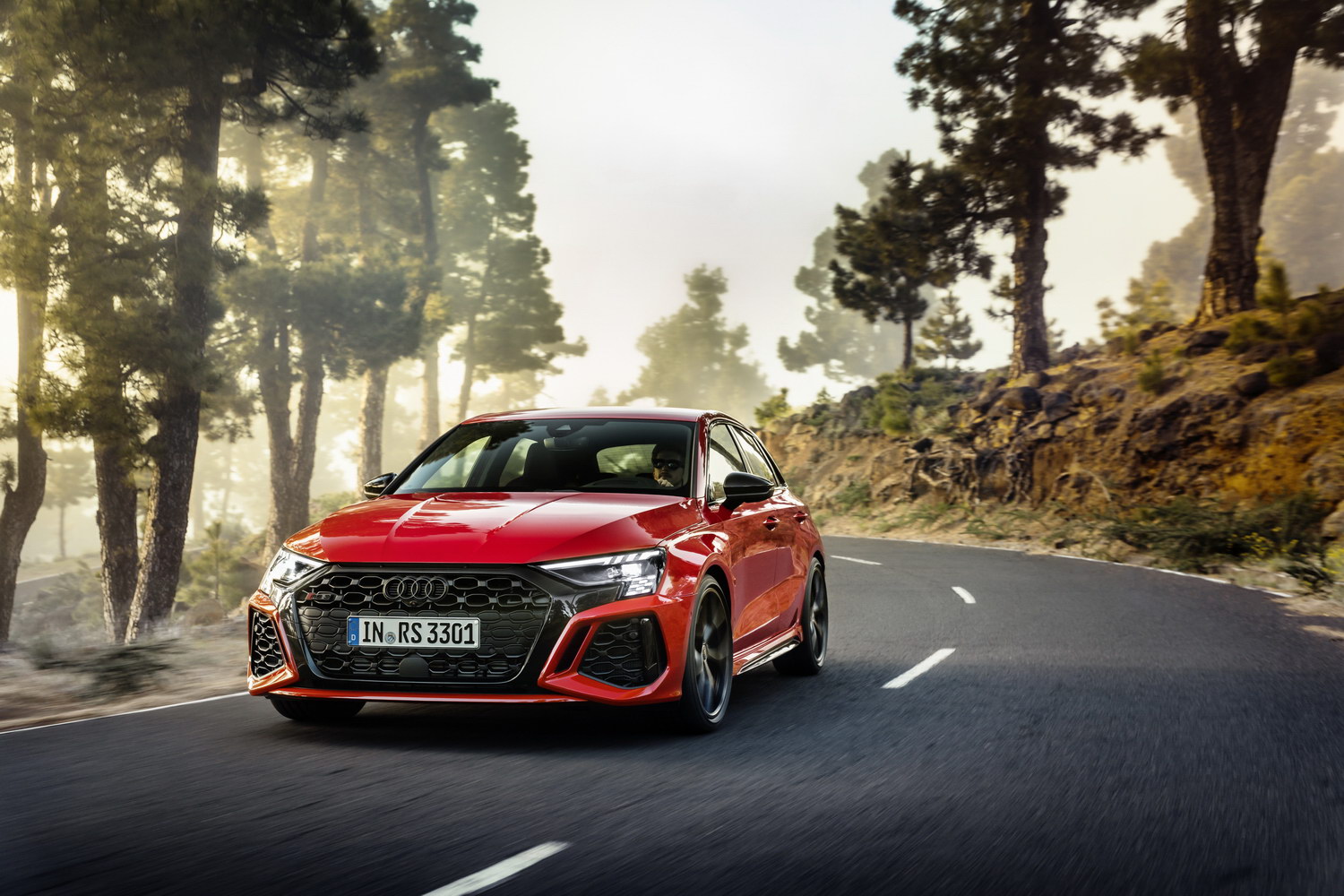 The 2022 Audi RS 3 comes in Sportback and Saloon guises.

Following on from last month's sneak preview, Audi has fully revealed its new RS 3 in Saloon and Sportback guises. As reported in June, it gets a little more performance from its turbocharged five-cylinder engine and a sophisticated new differential to divide that power up between the rear wheels. Now we know how it looks, too.

Menacing is the most accurate word for the RS 3's front end. Its designers have taken the folded-origami style of the regular Audi A3's nose, widened it, painted it mostly black and punched more holes in it to cool the engine behind. The dark new honeycomb grille is striking to say the least, though we're not sure if that or an aluminium finish will be standard on the Irish-market cars.

The RS 3s in our image gallery also feature Matrix LED headlights, with brooding dark surrounds that match the front grille. Scroll through the pics and you'll discover that the daytime running lights have a vaguely cheesy party trick.

When driving, the 3x5 LED segments on each side display a chequered flag motif. Unlocking or locking the car, one side cycles through the letters of the car - spelling out "R S 3".

Of rather more seriousness are the widened arches, accommodating the increased track widths and alloy wheels of up to 20 inches in diameter. There's even an air outlet behind the front wheels that is stylishly incorporated with a redesigned side sill.

The roof of the RS 3 Saloon can be finished in gloss black to contrast with the paintwork and there's a sliver of a boot spoiler, too. The RS 3 Sportback, meanwhile, features a relatively modest roof spoiler, and both cars get new rear bumpers with a large oval exhaust outlet on each side.

The usual Audi RS makeover has been applied to the interior of the RS 3, including leather-trimmed sports seats and a flat-bottomed steering wheel.

It appears that high-quality gearchange paddles will also be fitted, while the design and layout of the Audi 'virtual cockpit' digital instrumentation has been revamped especially for the RS 3. Along with readouts more suited to driving on a racetrack, there's a few different ways to visualise the rising revs - including a new 'RS Runway' style.

There are plenty of options to choose from, including a red 12 o'clock marker for the steering wheel and carbon fibre inlays.

Our pictures show the RS 3 cabin with an optional RS Design package applied - as identified by the eye-catching red or green accents throughout. That may not be offered in Ireland.

The only gearbox offered is a seven-speed, dual-clutch automatic with various modes of operation, including fully manual. Indeed, the digital rev counter changes colour and flashes when approaching the rev limiter to signal to the driver that it's time to change up.

As in all RS models, power is sent to all four wheels of the RS 3. The big news, however, is the installation of a sophisticated new rear differential, called the RS Torque Splitter. This can infinitely vary the split across the rear axle depending on driving mode and road conditions.

Audi has even included a setting called RS Torque Rear that is, in effect, a drift mode.

Audi Ireland has yet to confirm specification or pricing for the new RS 3, which is expected to go on sale before the end of 2021.